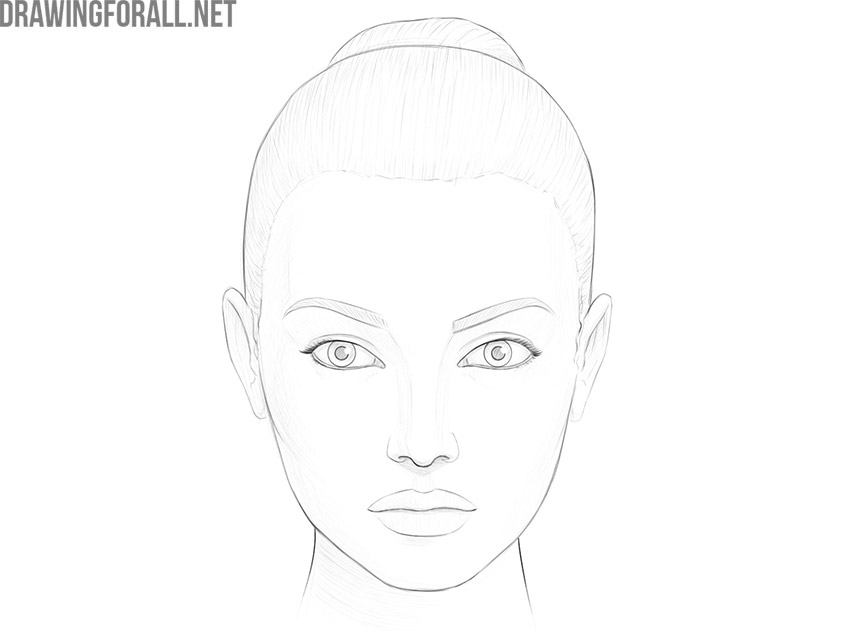 In this drawing tutorial, we will show you how to draw a female face. We will try to tell you about all the nuances of drawing a female face.

As we have said repeatedly in our previous articles, all human faces are drawn in approximately the same way. The difference lies in the details.

It is from the details that a person’s appearance consists, and it is thanks to some features that we distinguish some people from others. And undoubtedly, nature has made it so that the female face and the male face have their own characteristics. In this female face drawing tutorial, we will look at these characteristics and nuances in detail.

So let’s get down to the tutorial on how to draw a female face.

In order to draw a female face, and not be mistaken in the proportions, you first need to outline the basic shapes. The human head is basically an inverted egg. Sketch this geometric shape using barely visible lines.

To check the proportionality of the drawing, you can look at it in the mirror from time to time. The mirror reflection of your female face drawing will show you all the mistakes at once. 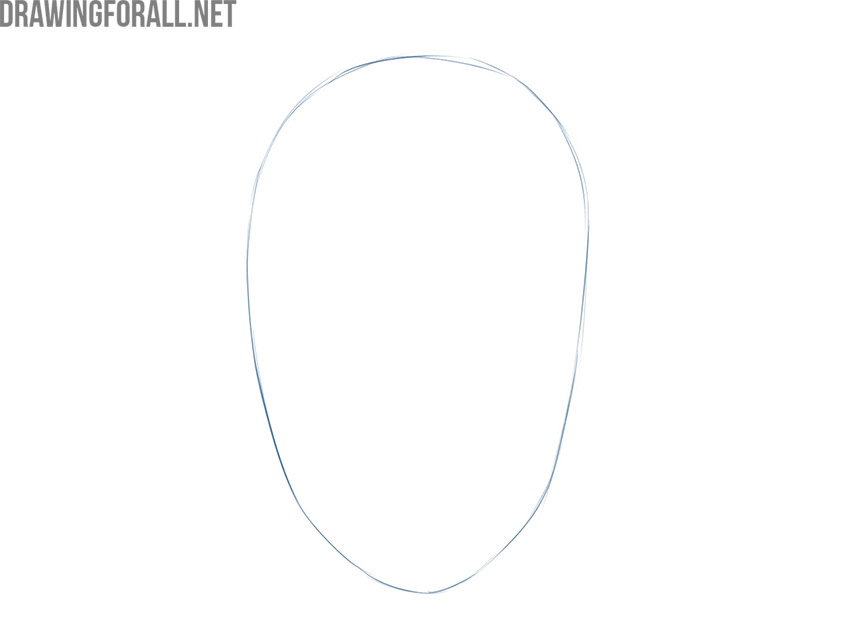 Now sketch out a vertical line running exactly through the center of the face. This line will help us not to be mistaken in the proportions of the face. Now draw a horizontal line for the eyes 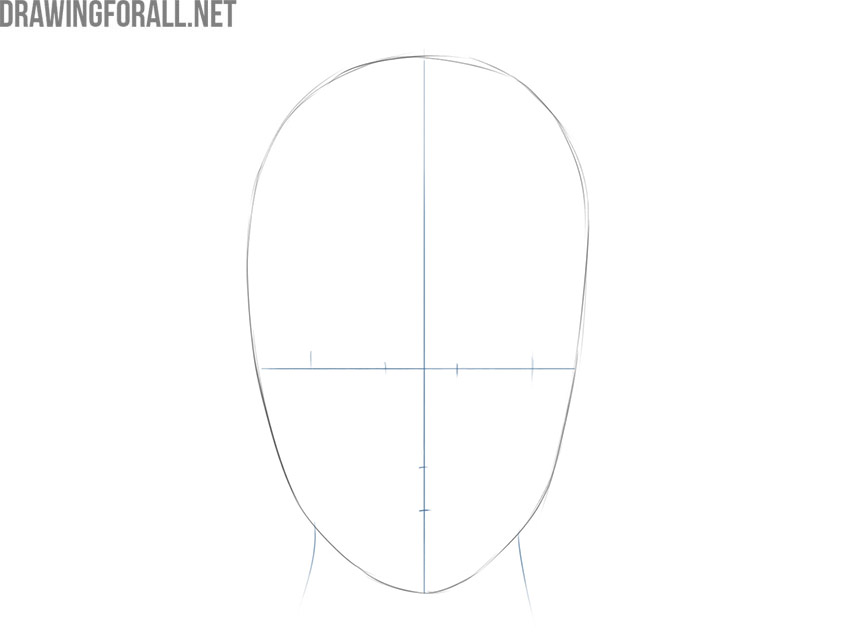 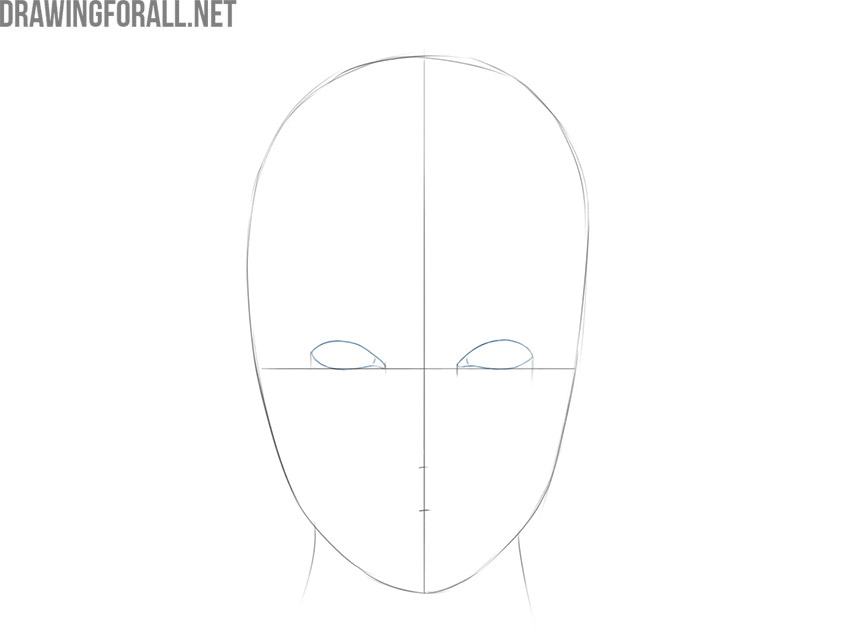 Now carefully draw the inner lines of the lower eyelids. Don’t forget that the eyelids have a thickness, and by showing that thickness in your drawing, you give it a more natural look. Just above the eyes, draw folds. These are the visible outlines of the sockets in which the eyes are located. 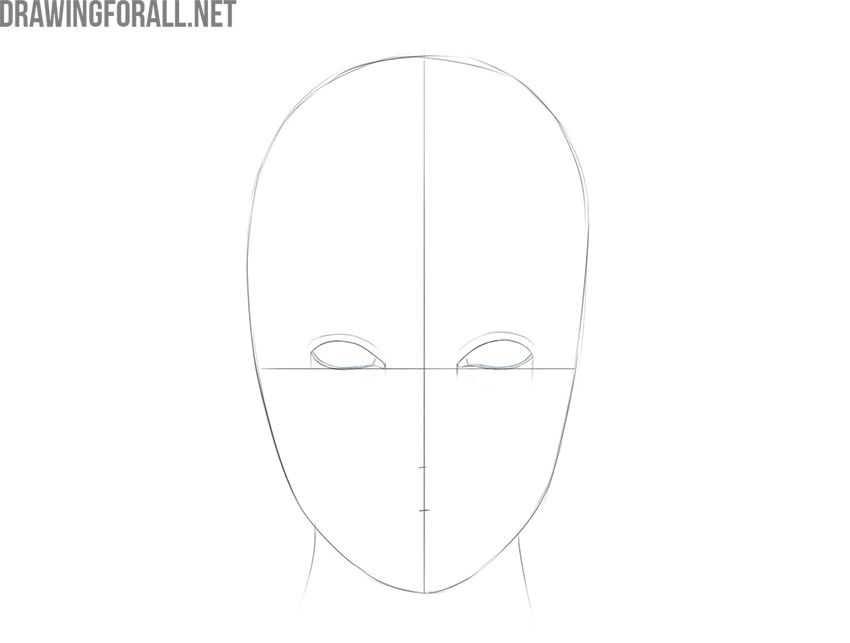 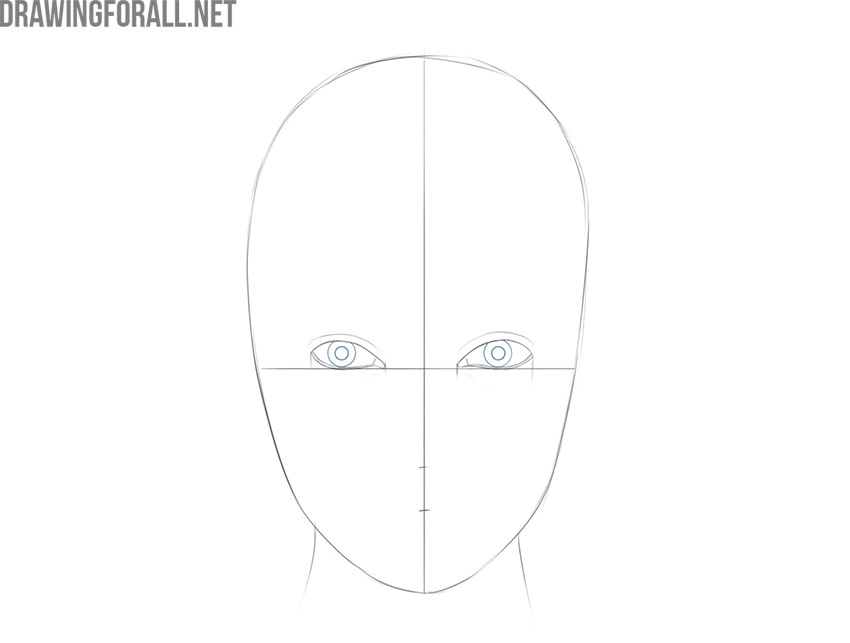 Using dark lines draw the upper lashes. Don’t draw the lower lashes. They are too small and light, and almost invisible on the face. Draw eyebrows just above the eyes. In the tradition of drawing, it has developed so that when artists draw a female face, they make the eyelashes thicker and the eyebrows higher than when they draw a man’s face. 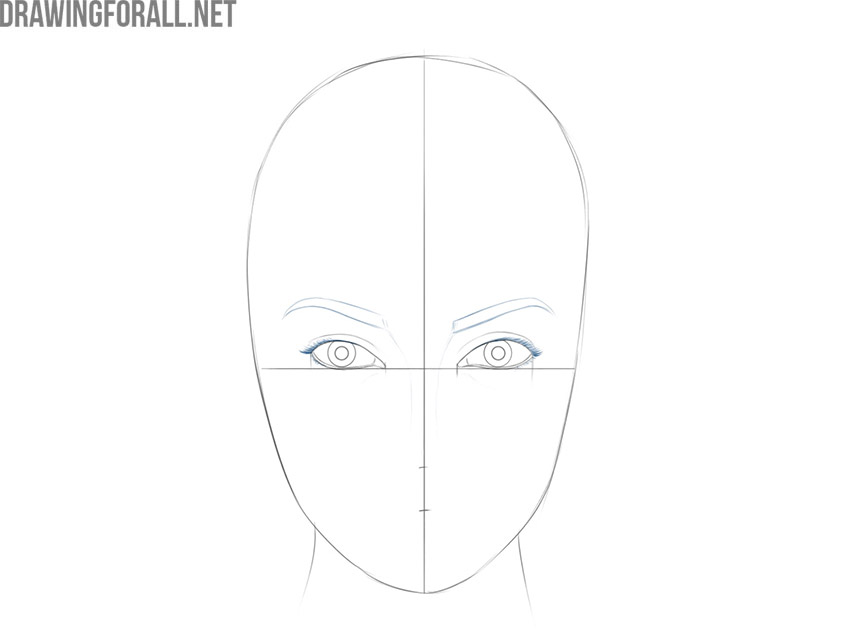 Now, being guided the line sketched earlier, draw the nose. Start at the tip of the nose, then smoothly draw the wings and the bridge of the nose. Another difference in drawing a female face is that a female nose is drawn slightly smaller than a male. 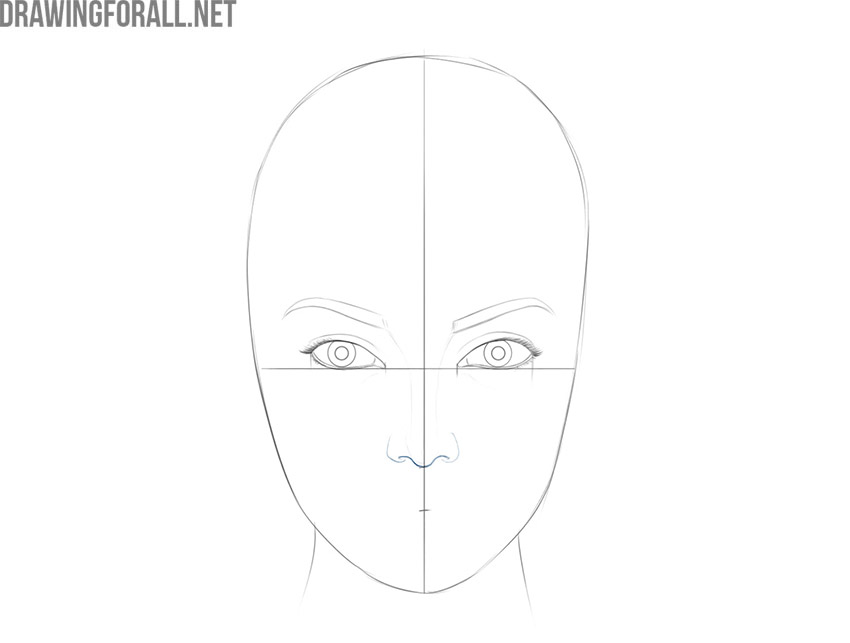 Draw the lips. First of all, draw the center line of the mouth, using the guideline sketched earlier. Now with smooth lines draw out the outlines of the upper lip, and then the lower one. Another difference in drawing a female and a male face is that female lips are usually drawn plumper than males. 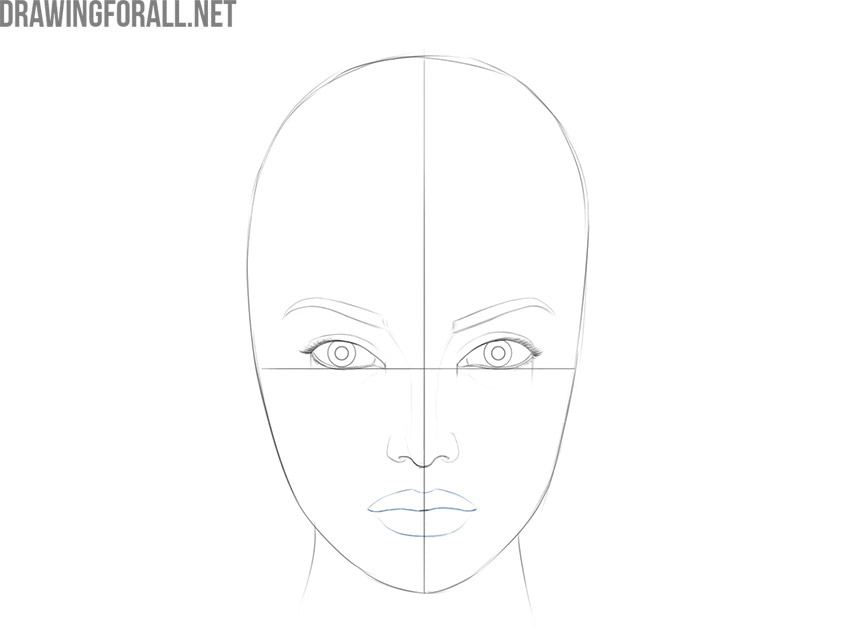 Draw the ears with smooth lines. The upper tips of the ears are flush with the eyebrows and the lower tips are flush with the tip of the nose. Next, draw the outlines of the jaw. To check if your drawing of a female face is proportional, you can not only look at it through a mirror but also move away from it a short distance. 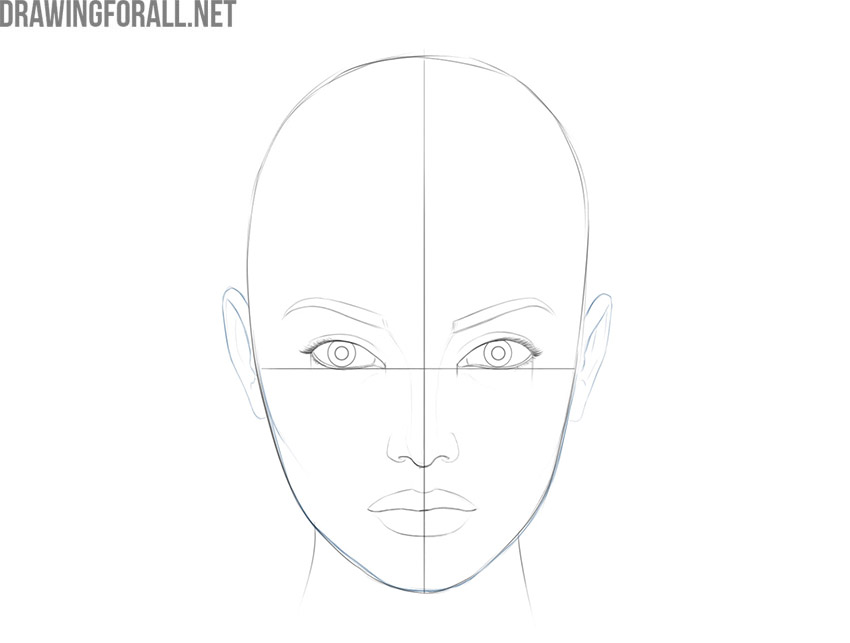 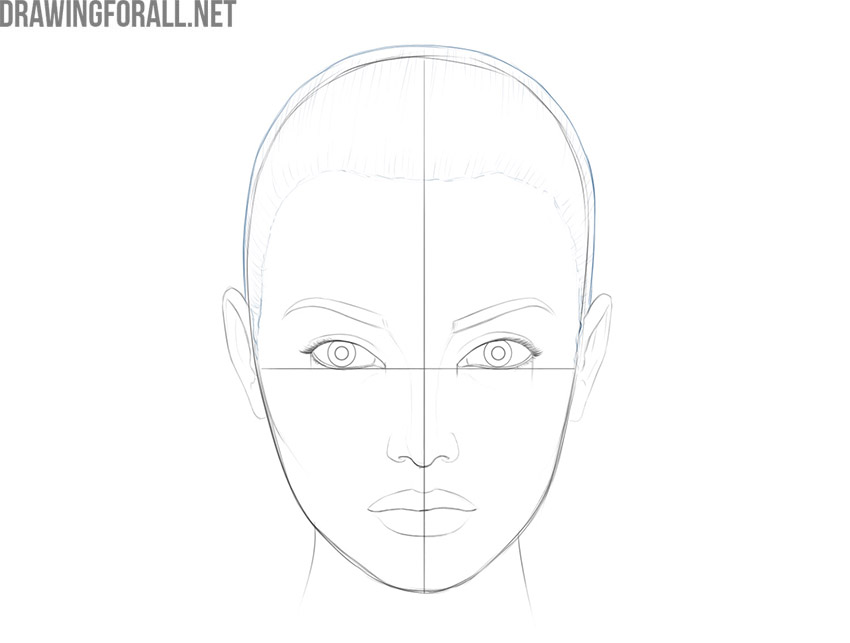 Now erase all unnecessary guidelines from your drawing of the female face. To give the drawing a more voluminous look, make the details that are closer to us a little more contrasting than those that are a little further from us. This will give the female face drawing a sense of volume and realism. 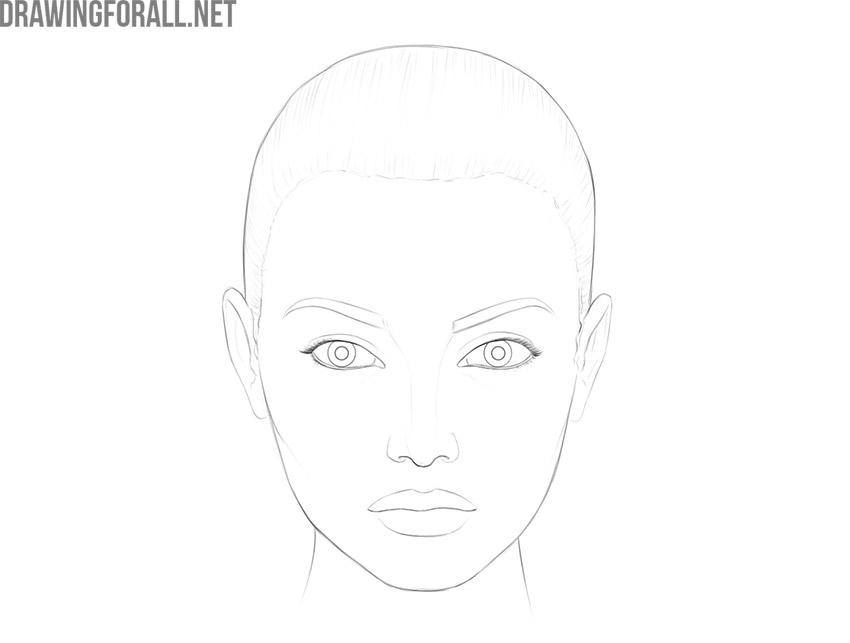 Draw the visible part of the bun behind the head. Add more light lines in the direction of hair growth to create a realistic hair texture. Here you can add some additional details that are not in our female face drawing, for example, earrings, moles, etc. 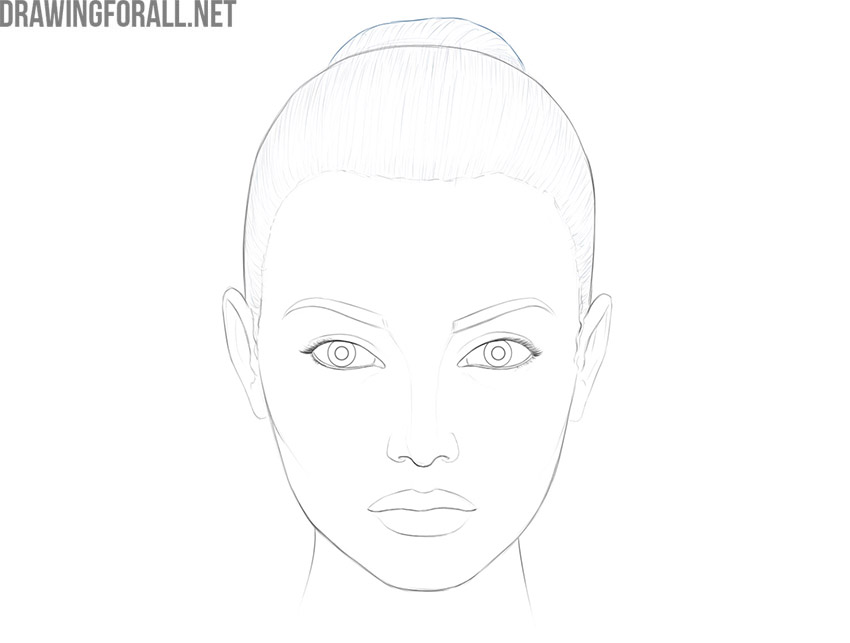 To make the female face drawing more lively and voluminous, you need to draw shadows. Using hatching, start drawing shadows from the darkest areas, gradually moving to lighter ones. Don’t forget to darken the pupils, leaving round highlights in them. This will liven up the glance.

To consolidate your knowledge gained in this female face drawing tutorial, try some drawing exercises.

First, try drawing a similar face, but with different features. Try to make the girl younger or older. Try drawing interesting details on her face.

All these actions will help not only to consolidate your knowledge gained in this female face drawing tutorial but also make it possible to draw more diverse faces that are not tied to our example.