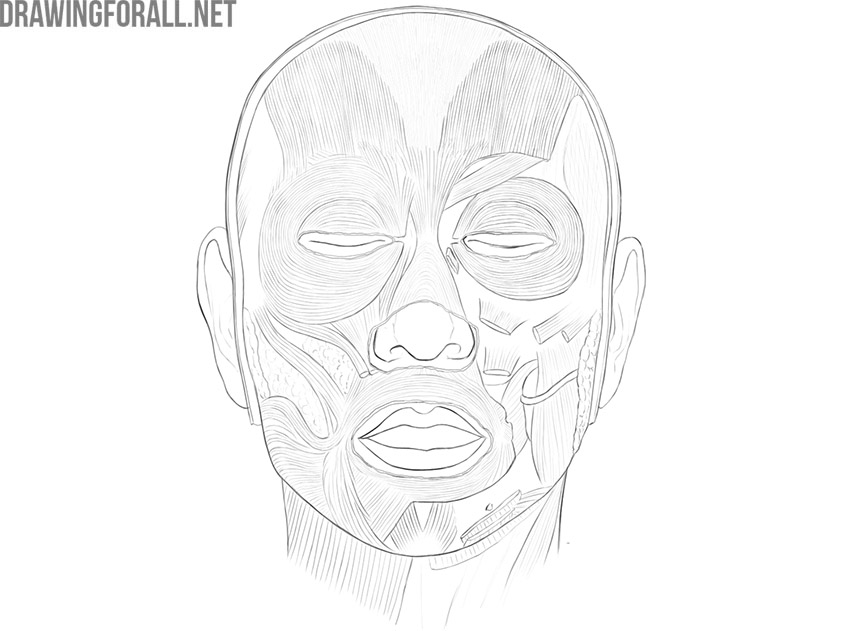 The mimic muscles have some features. As you know, bones are the attachment points for common skeletal muscles. The muscle attaches to the bone, usually near the closest joint. When contracting, the muscle acts on the bone sets in motion the nearest joint, and as a result, we see the movement of the bone.

Another feature of the facial muscles is the absence of fascia. Fasciae are dense connective tissue membranes that cover almost all of the human skeletal muscles. If you love to cook meat, you have probably seen dense white films that are located on muscle fibers – these are fascia. The facial muscles are completely devoid of the fascia.

Finally, one more feature concerns the topography of the mimic muscles. The mimic muscles are located around the natural openings of the head, such as the mouth, nose, ears, and orbital borders.

Let’s look at the main mimic muscles of a human.

The epicranius muscle is the largest facial muscle. This muscle has two parts – the frontal part and the occipital part. Both parts of the muscle connect to a dense tendon plate called a galea aponeurotica.

It is a large, prominent muscle that surrounds the eye. The orbicularis oculi are divided into three parts: the orbital part, the palpebral part, and the lacrimal part.

The orbital part is located around the orbit. This is the largest part, it, in fact, surrounds all the rest of the circular muscle of the eye. When contracted, this muscle strains the skin around the eye and squeezes it tightly.

The palpebral part forms the muscle base for the eyelids. These muscles contract and close the eyes.

The nasalis muscle has two parts. The transverse part is located outside. This part covers the wings of the nose from the outside, diverging laterally and passing into the tendon.

We can only see the wing part if we use a special dissection technique because the wing part goes around the wings of the nose from the inside and attaches to the nasal cartilage.

Both parts of the nasalis muscle work together to contract the wings of the nose so as to narrow the nostrils slightly.

When contracted, the marginal part pulls out the lips like a tube, and the lip part tightly closes the lips.

The buccinator muscle is quite large, it is slightly overlapped by the muscles of mastication (we will discuss it soon), the zygomatic muscles, and is completely overlapped by the buccal fat pad. This formation of adipose tissue is especially noticeable in infants and overweight people.

The buccal muscle during bilateral contraction (that is when both the left and right muscles are working) presses the cheeks to the teeth, pulling them inward; during unilateral contraction, the muscle pulls the corner of the mouth laterally.

These two muscles are fairly easy to find, as they both start from the anterior surface of the zygomatic bone. These muscles have a similar shape and are quite close to each other. To distinguish them, you need to remember that the small zygomaticus minor muscle is located closer to the nose. 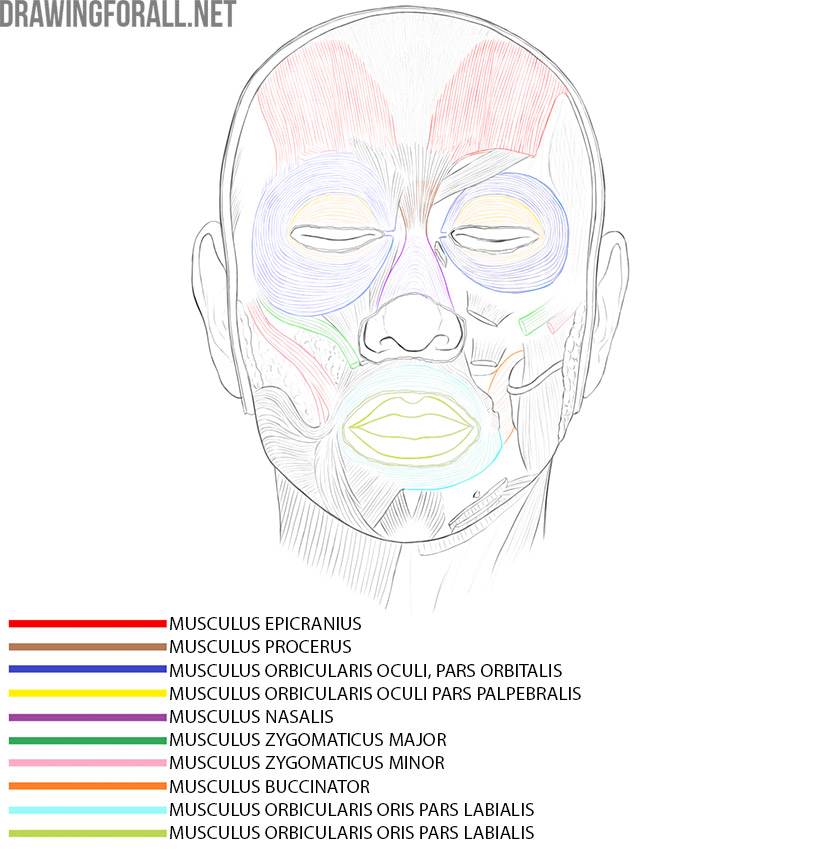 The muscles of mastication are large, powerful, and essential for nutrition and survival. A person has four pairs of masticatory muscles, of which two are of particular importance for plastic anatomy because they are involved in the formation of the contour of the face.

Multiple muscle bundles converge downward and centrally, forming a powerful tendon that attaches to the coronoid process of the mandible.

You can feel the contraction of the temporalis muscle if you place your fingers on the temporal fossa and clench your teeth several times to simulate chewing.

This is also a powerful and highly visible muscle. The chewing muscle contours through the skin at the time of contraction, especially in lean people. 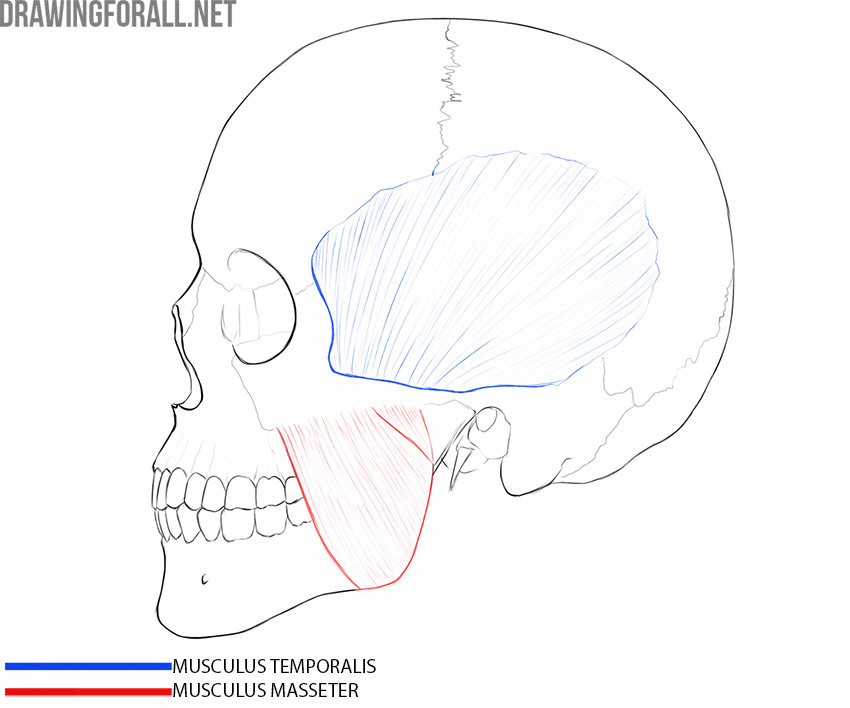 Basic Topography of the Head

In topographic anatomy, body parts are studied, not organ systems. For example, today we will be looking at basic head topography. This is not only the skull but also the muscles of the head and other anatomical formations that form important landmarks in plastic anatomy.

To draw the line that separates the head and neck, we need to draw a line from the chin along the lower edge of the lower jaw, then go to the mastoid process and finish at the lower occipital protuberance. 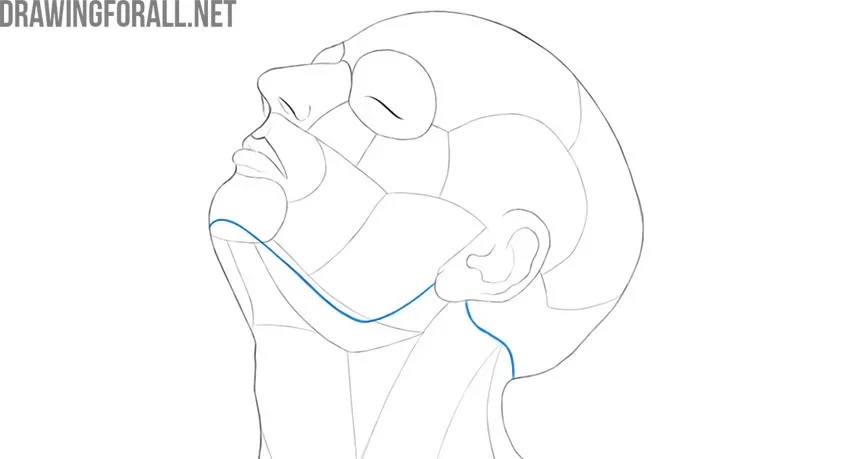 Cerebral and Facial Parts of the Head 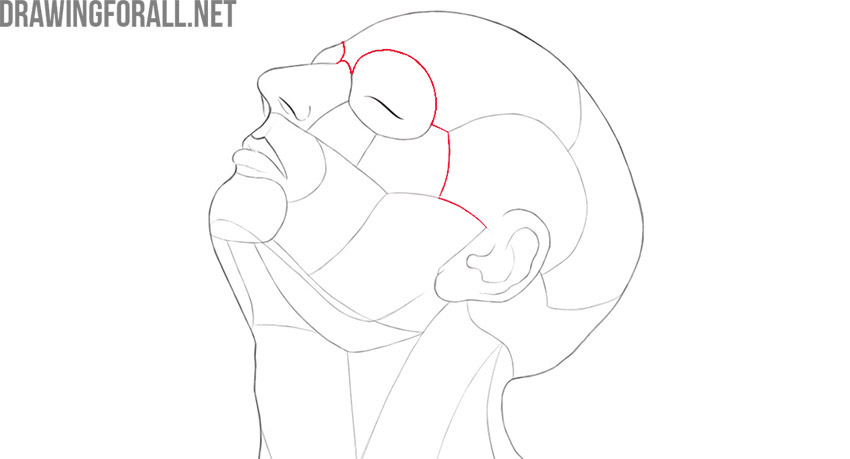 Determining the boundaries of areas is a fundamentally important task of topographic anatomy. To study the regions of the head, we must be able to clearly separate the cerebral and facial parts of the head.

Areas of the Cerebral Section of the Head

On the cerebral part of the head, we can see three areas – the fronto-parieto-occipital region, the temporal, and mastoid. The frontal-parietal-occipital region is unpaired, the other two areas are paired.

The frontal-parietal-occipital regions are bordered:
⦁ In front – with orbital edges of the frontal bone;
⦁ Behind – with the upper neck line;
⦁ Laterally – with the superior temporal line of the parietal bone.

The mastoid area corresponds to the boundaries of the mastoid process.

Regions of the Facial Part

The boundaries of the nasal region correspond to the contours of the outer part of the nose, which consists of the back, root, apex, and wings.

The buccal region borders:
⦁ Medial – with the nasolabial furrow;
⦁ Laterally – with the parotid-masticatory area;
⦁ Bottom – with the lower edge of the lower jaw;
⦁ Above – with the zygomatic and infraorbital areas.

The mouth area is bordered:
⦁ Above – with the new area;
⦁ Below – with the chin area;
⦁ Laterally on both sides – with the buccal areas.

The chin is bordered:
⦁ Above – with the area of the mouth;
⦁ Laterally on both sides – with the buccal areas;
⦁ Bottom – with the lower edge of the lower jaw. 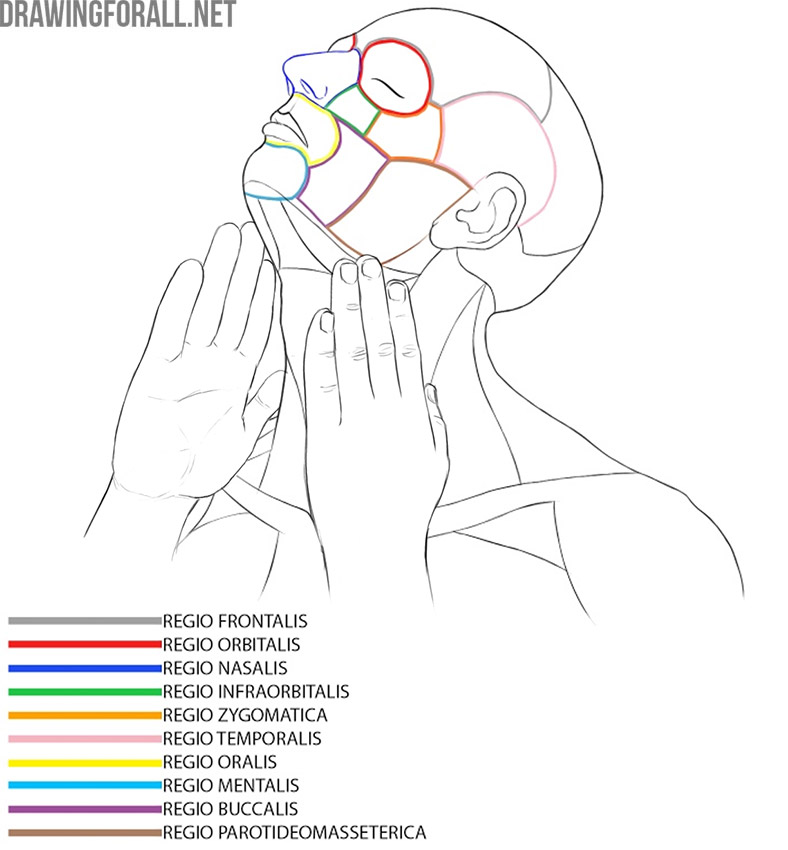