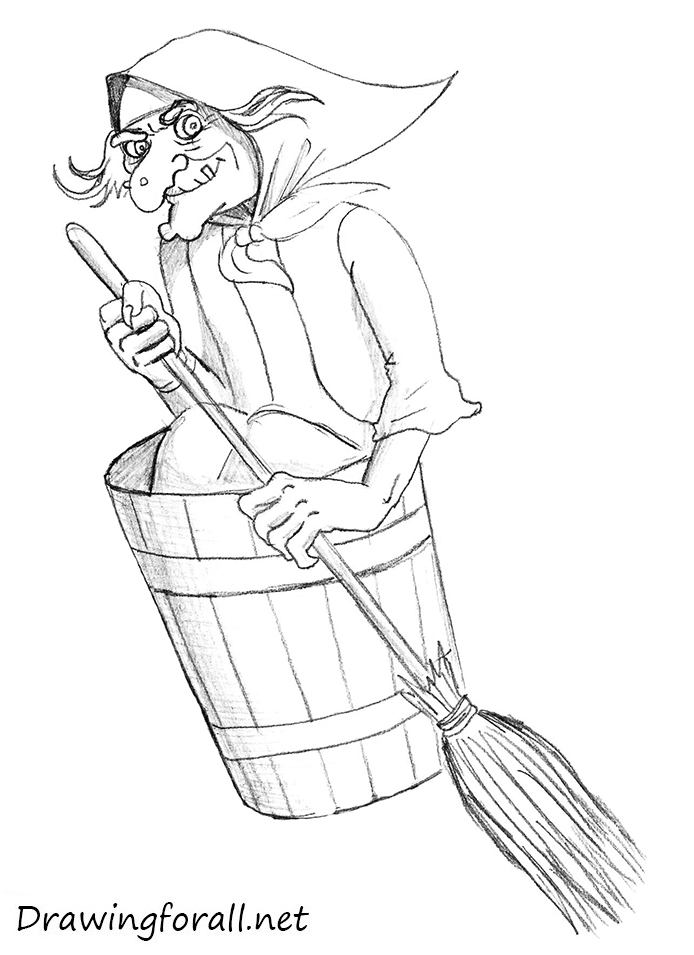 Hi! We prepared for you a new drawing tutorial in which we will teach you how to draw Baba Yaga. Baba Yaga – the ancient character of Slavic mythology.  Originally it was a deity of death: a woman with a snake tail, who was watching over the entrance to the underworld and accompanied deceased soul into the realm of the dead. She lives on the border of the worlds of the living and the dead, somewhere in “the kingdom of Far Far Away.” In fairy tales, she appears in different incarnations. In some tales she acts as a positive character and  in other tales as a negative. In the tales she lives in the hut on chicken legs and flies in a mortar and a broomstick. It is a quarrelsome, terrifying, but nevertheless a good old woman, who is the mistress of forests and often comes to the aid of the main hero of the tales, helping to destroy Koshchey, Dragon, or Lex Luthor. In our previous lessons we drew characters from Russia – Cheburashka and Matryoshka. So, let;s start this tutorial and learn how to draw Baba Yaga!

First sketch out the position of Baba Yaga and the outlines of her mortar and broom by using circles and sticks. And as in our previous drawing lessons we want to note, that in the first steps you should not press down too hard on a pencil. 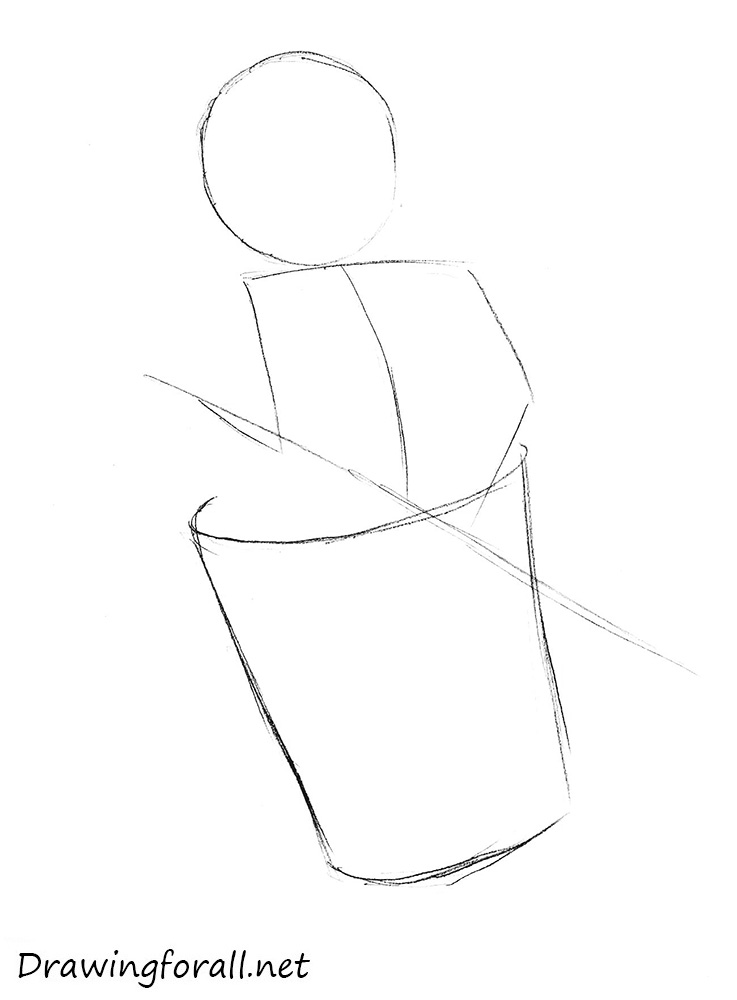 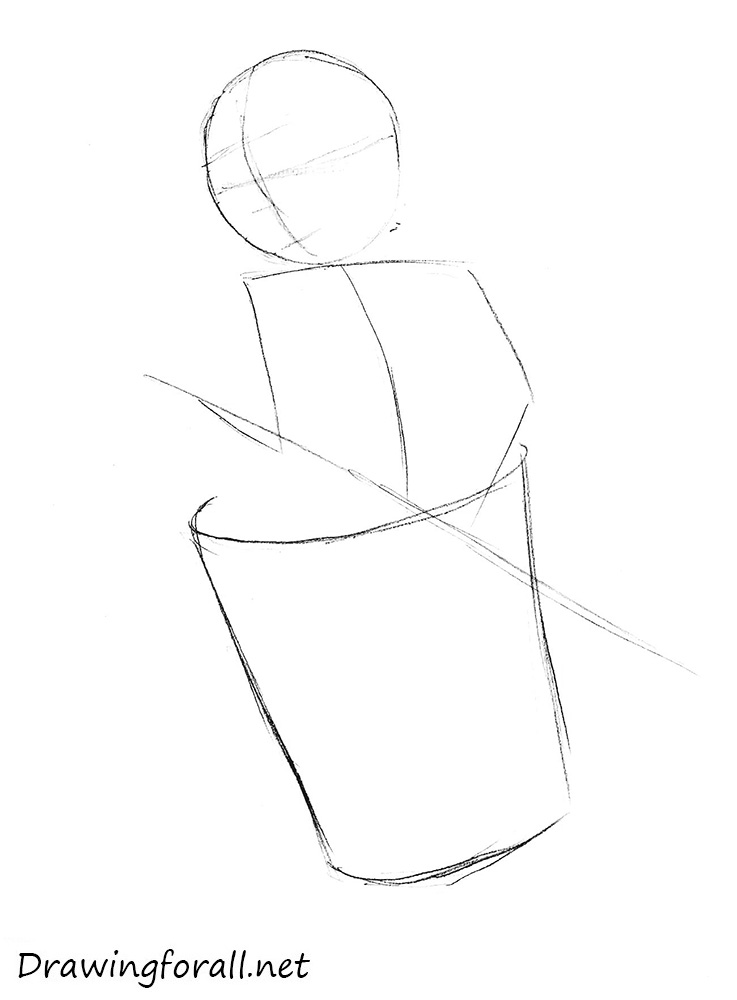 Now we add volume to Baba Yaga. First add volume to the torso. By using cylinders draw hands. Sketch out the palms and fingers. Draw shapes of knees and move to the next step. 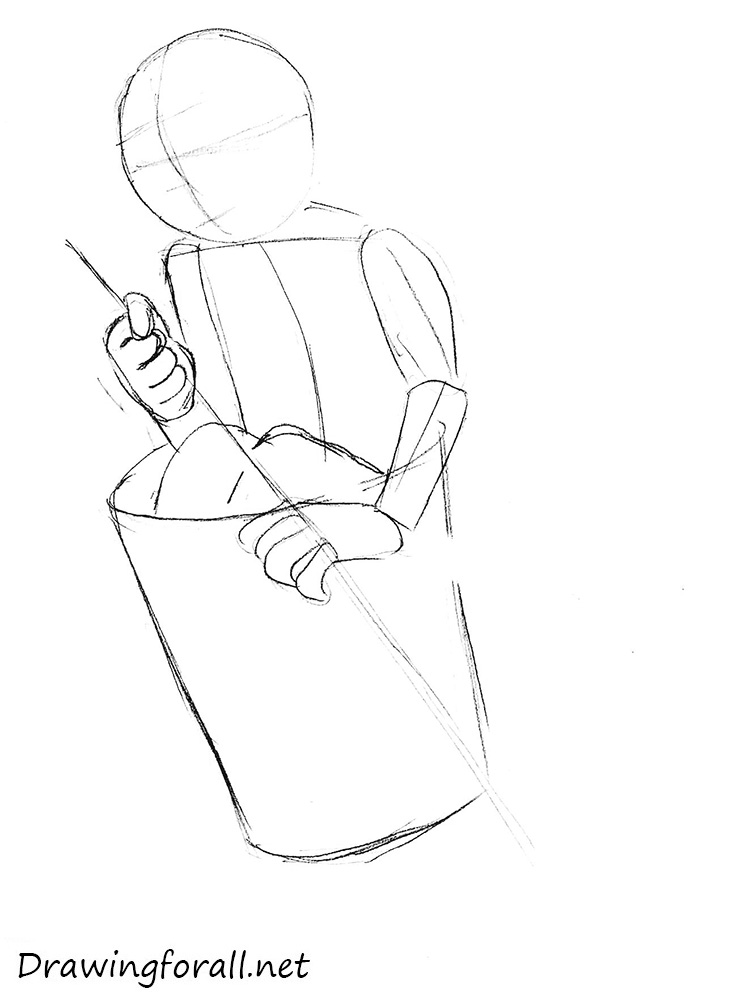 A very simple stage, in which we draw head scarf of Baba Yaga. Please note that the fabric should evolve in the direction of the wind. By the way, if you like to draw another fairy tale character, we recommend you tutorial about how to draw Karlsson – the character of Swedish fairy tale. 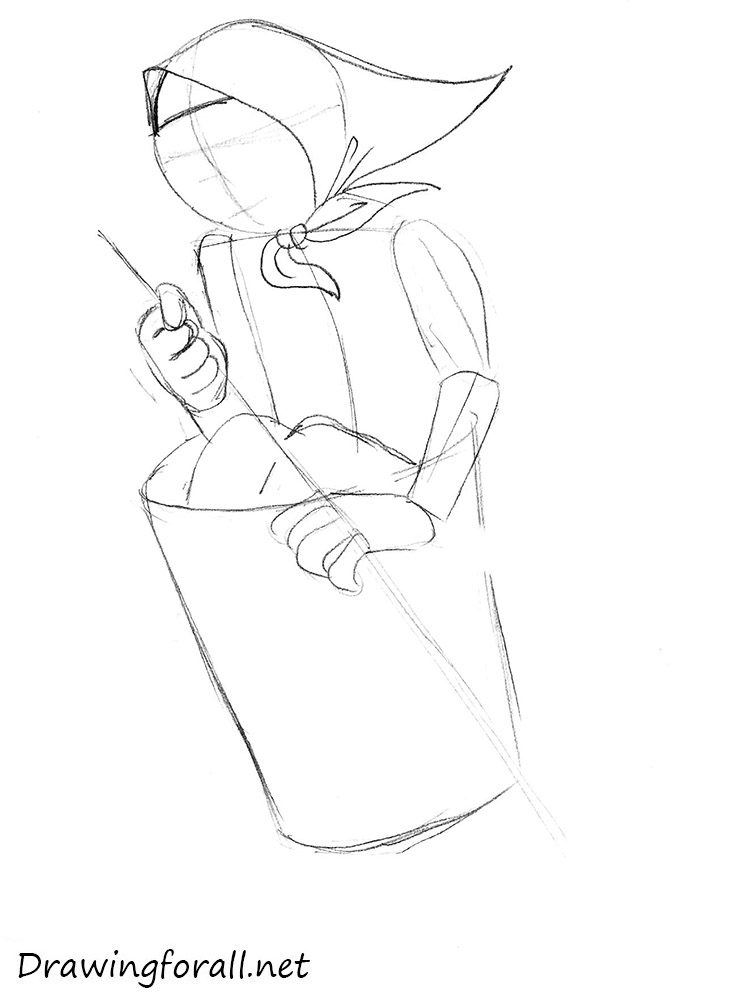 And we continue our lesson about how to draw Baba Yaga. At this step we add some facial features. With help of vertical line of the facial symmetry from the second step we draw eyes using circles. Using curved lines draw the hooked nose and smiling mouth. 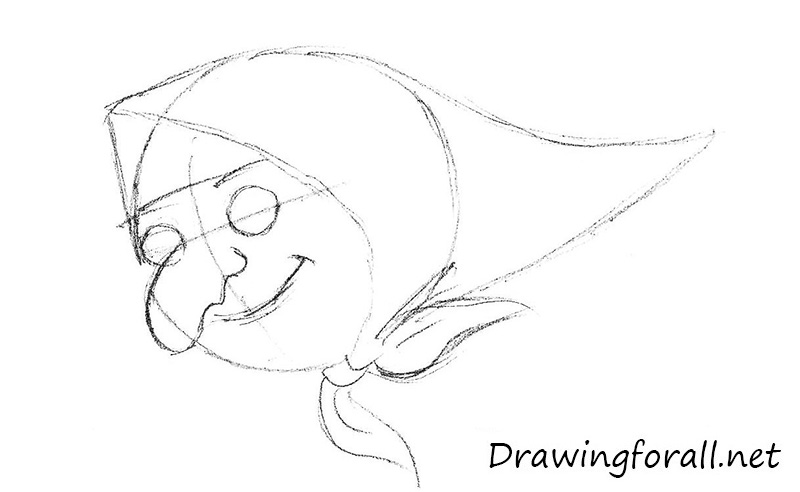 At this step of tutorial about how to draw Baba Yaga we finish with the face. At first draw thick eyebrows. By using circles draw pupils. Draw cheek and chin which is very similar to a bone. 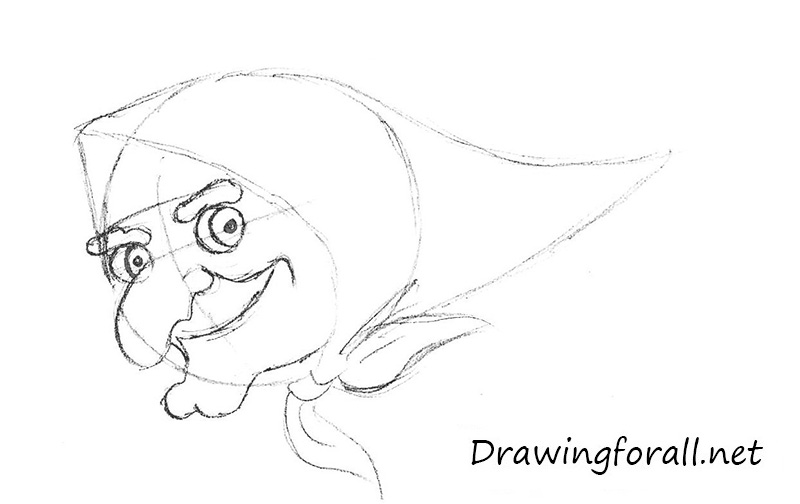 Erase all unnecessary guidelines and darken the lines of the head. 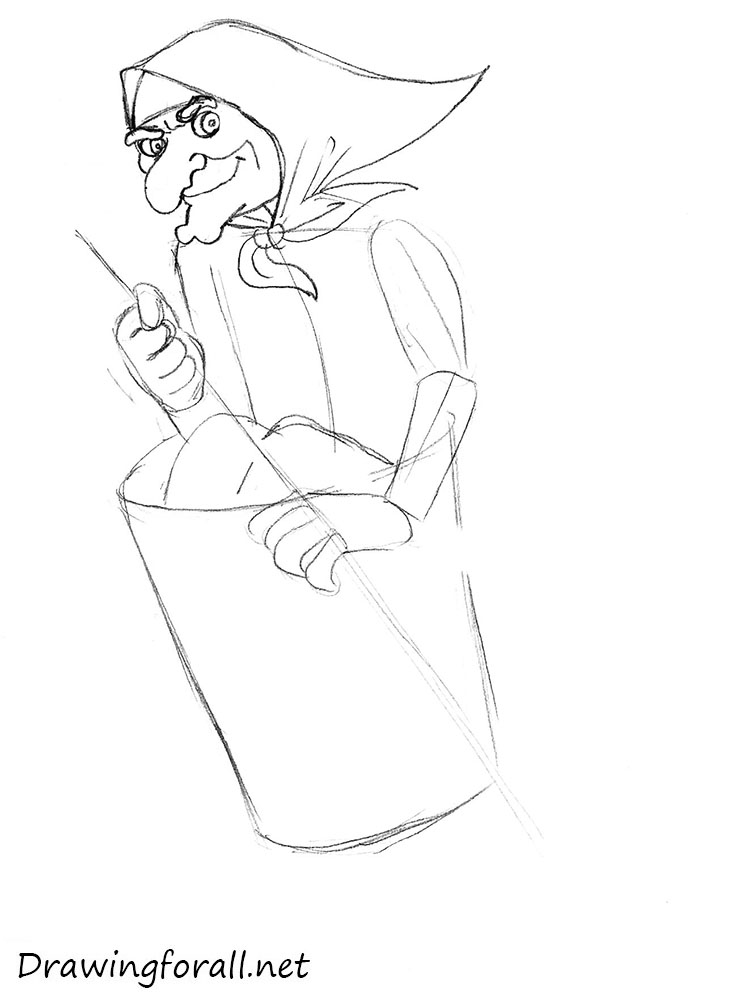 At this step we add characteristic details. Add some wrinkles around the eyes and in the area of the nasal bridge. Using curved lines draw the flowing hair. Then draw a couple of warts on the nose, mouth wrinkles and protruding teeth. 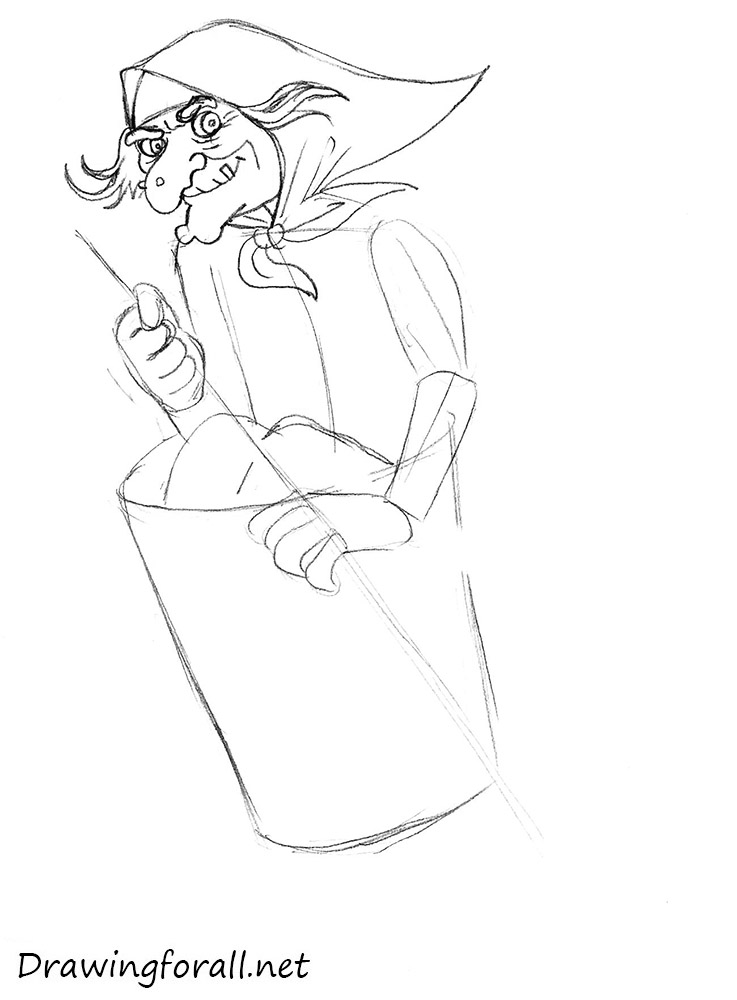 At this step in tutorial about how to draw Baba Yaga we add details to the torso. With a pair of curved lines draw vest. Draw the sleeves and erase the guidelines of the hands. Draw the knuckles and bony fingers. Draw stalk of the broom and move to the next step.

Quite simple step – here we draw branches of the broom which are attached to the stalk. Draw it using long and dark strokes. 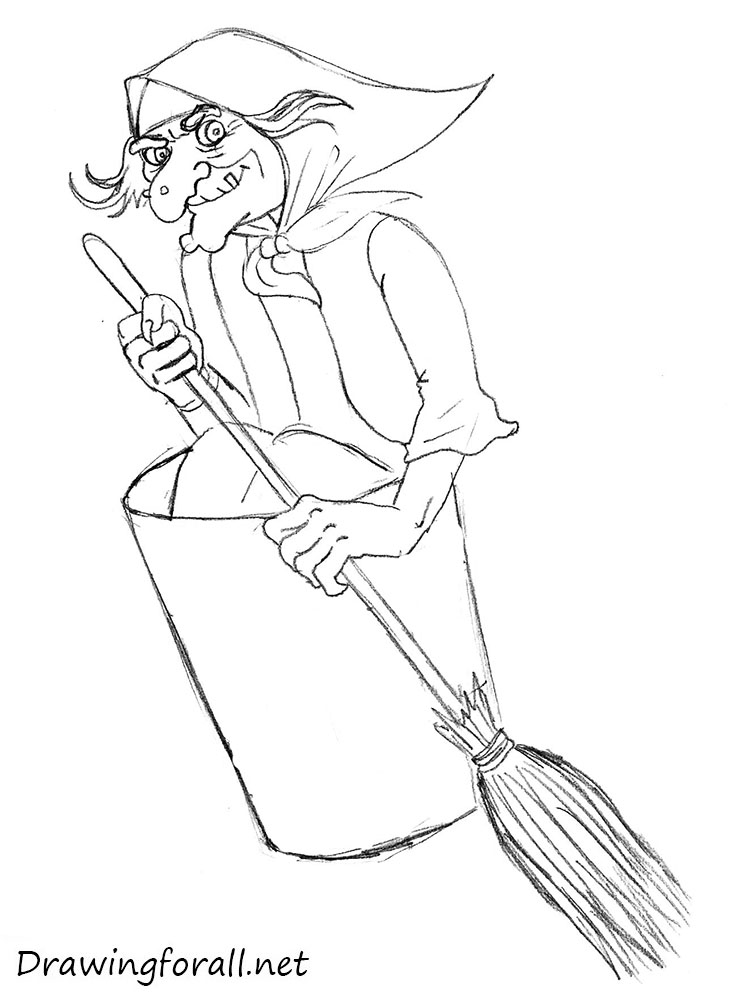 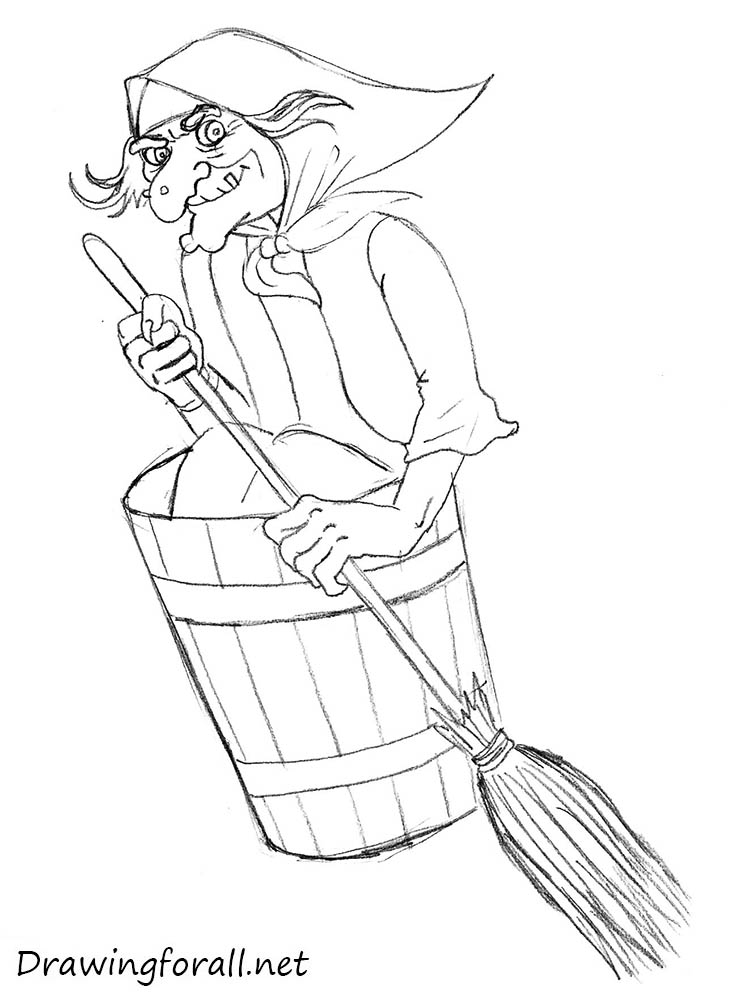 At the final step of tutorial about how to draw Baba Yaga we add shadows. First we should determine the place of the light source. In this drawing the light falls from the upper right side. So, we should add shadows to the areas where the light does not fall. In order to get shadows as in our example, we recommend you to use hatching and crosshatching.

So, that was tutorial about how to draw Baba Yaga step by step. We hope you enjoyed this tutorial. Share this lesson with your friends and subscribe on us in social networks. Stay tuned, friends!