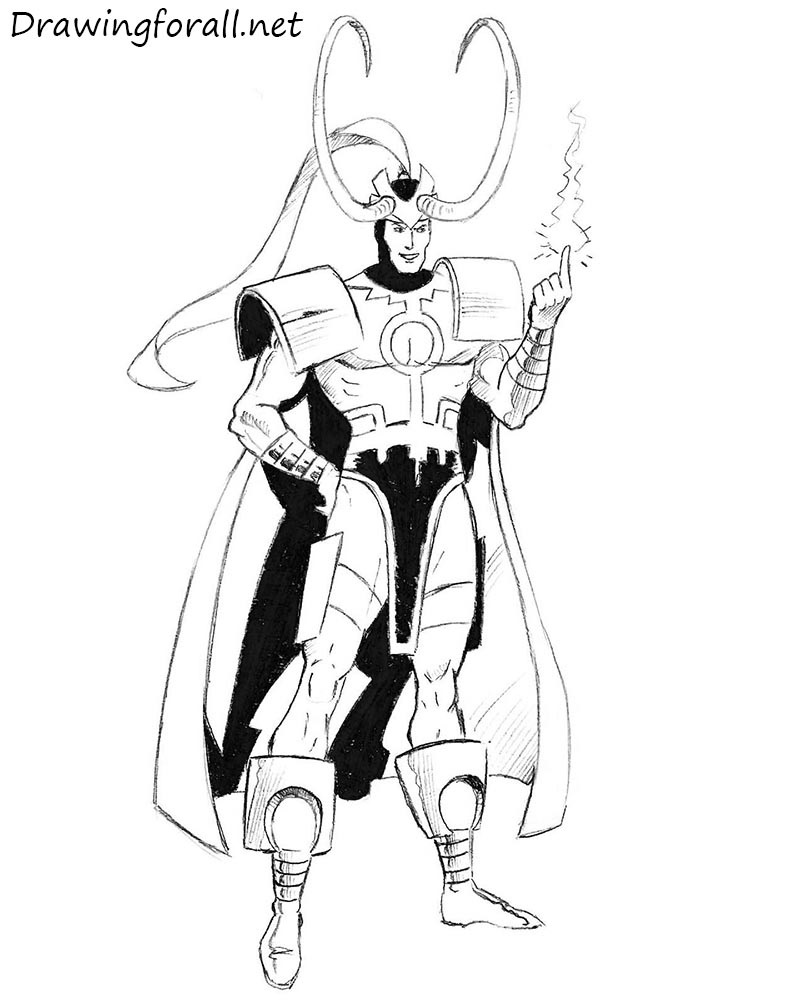 Hello! Here is a new step by step drawing lesson, in which we will talk about Loki. As you know, Loki – one of the central characters of comics and movies about Thor – the superhero and the god of thunder in combination. We want to note a very unusual move of Marvel writers, who have decided to turn to the pagan pantheon of Scandinavian gods for fresh ideas. By the way, in the comics of this universe can be seen as Zeus, Anubis and the other gods of the ancient world.

Formally, the first comic book about Thor was published in 1962, the same year the world seen Loki – his half-brother. In fact, Loki was coined by the Scandinavian tribes, known as the Vikings. Their mythology was very rich – besides sea monsters and dragons, forests were inhabited by fairy-tale characters, and the sky – by multiple gods with different characters. So, let’s learn how to draw Loki!

At first we sketch out the stickman – we draw this figure of sticks and circles to denote the basic proportions of Loki, his posture and position on the sheet of paper. Here are the main features of the male figure – the height is equal to the sum of heights of 7.5 heads, shoulders much wider than pelvis, and arms reach to about the middle of the segment between the belt and the knee joint.

As you can see, we draw the head, using an oval, and draw the rest of body using simple lines.

Our regular readers may have noticed that every drawing lesson about human we start with a stickman. Even realistic lessons, such as how to draw a Doctor, start with stickman, very similar to the early stages of drawing lessons about superheroes. 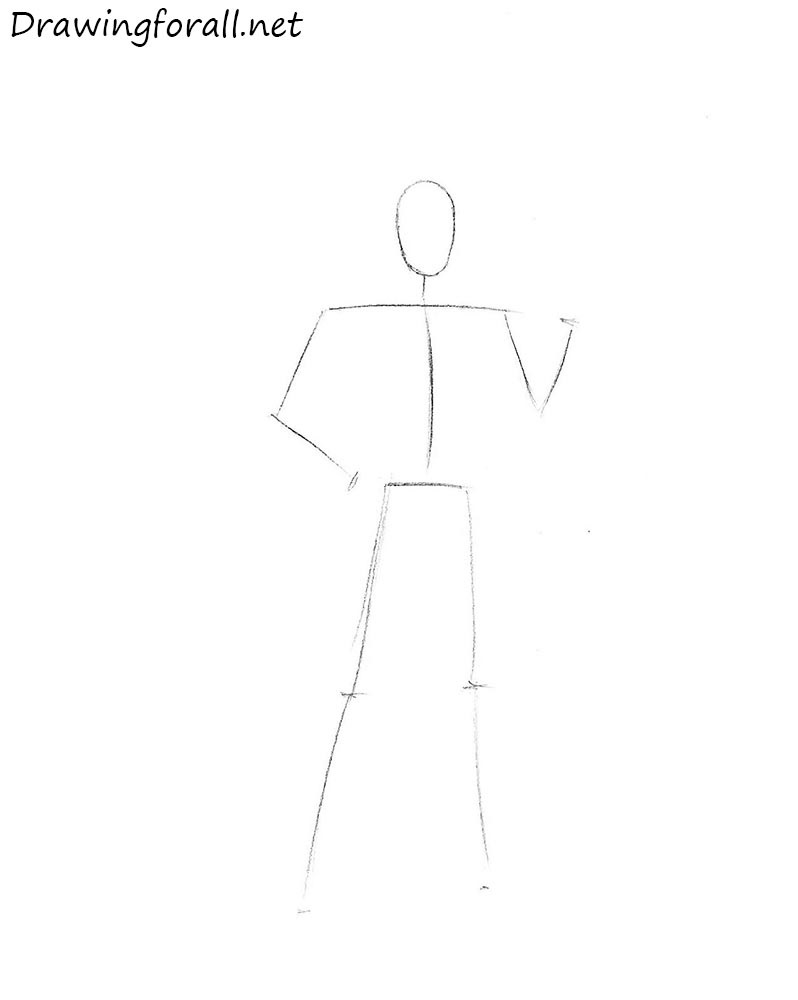 Mark up the head of Loki – draw a vertical line of symmetry of the face and the horizontal lines of the eyes and mouth. Focusing on them, draw long and curved horns. Then we go down, draw a short cylinder of the neck. Below the neck we sketch out the torso. Then – arms, that are visually divided into shoulders, upper arms, elbows, forearms and hands.

Torso sharply narrowed down due to the wide chest muscles and back muscles, as well as due to the narrow waist. However, there the figure should not be similar to an hourglass as the girl 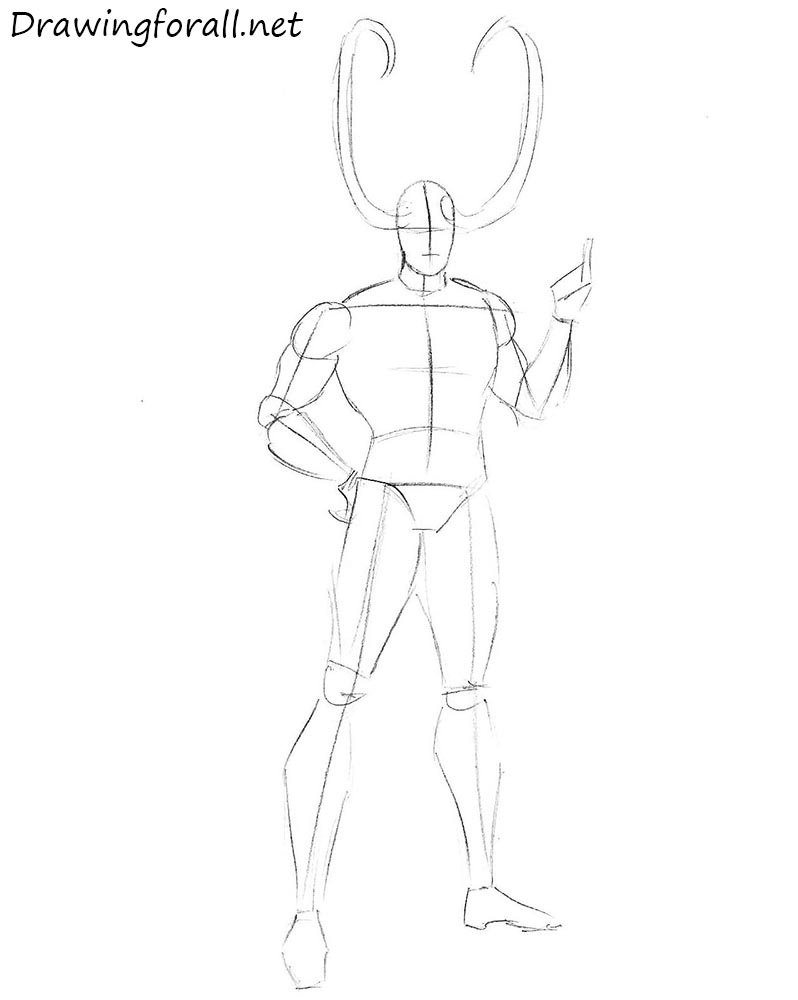 We outline a long, twisted tape in three places on the helmet of Loki. Sketch out the elements of massive armor, located on shoulders. Just below the knees draw the lapels of boots. Also in this step we draw the cape of Loki, do not forget to draw a pair of folds on the edges, which gradually expands downward. By the way, not so long ago we drew another lover of capes – Darth Vader. 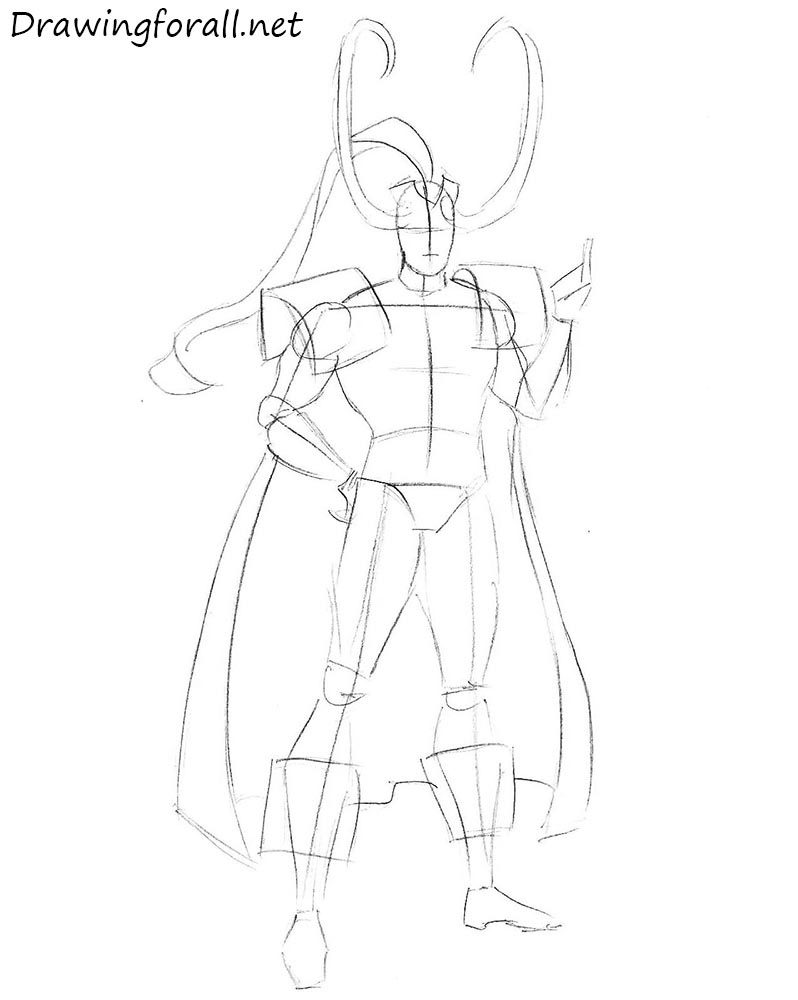 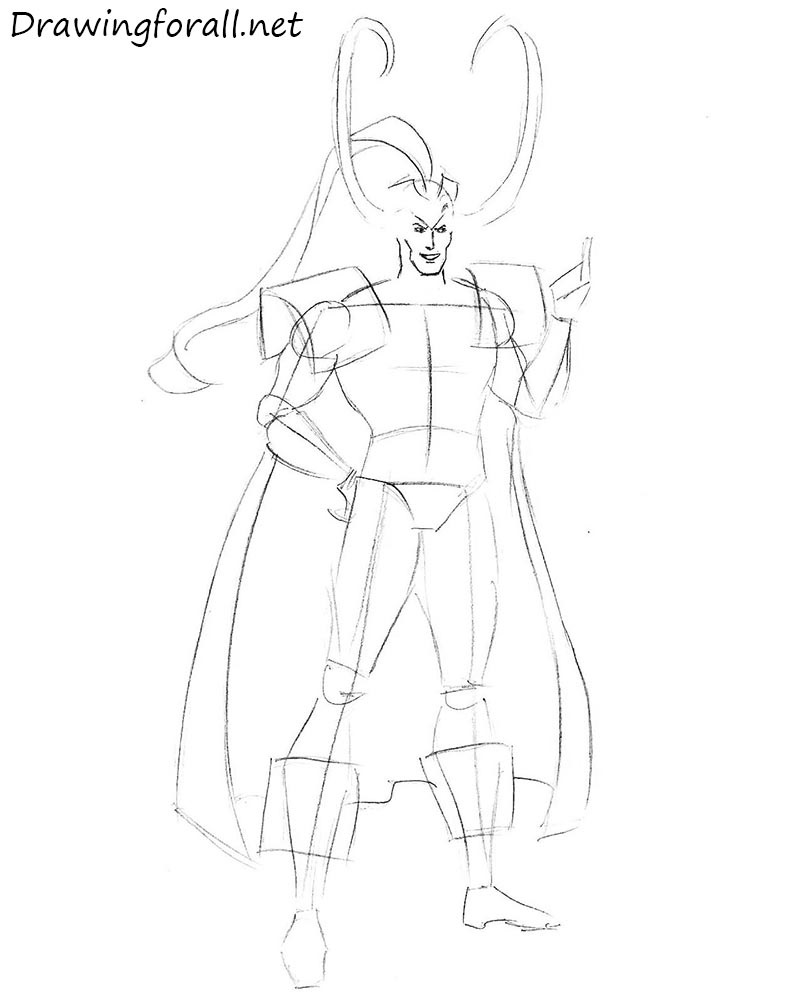 Now draw the helmet of Loki. Note the front plate in the shape of V – from this place start the horns. Don’t forget to erase the extra guidelines from the head and face of Loki. 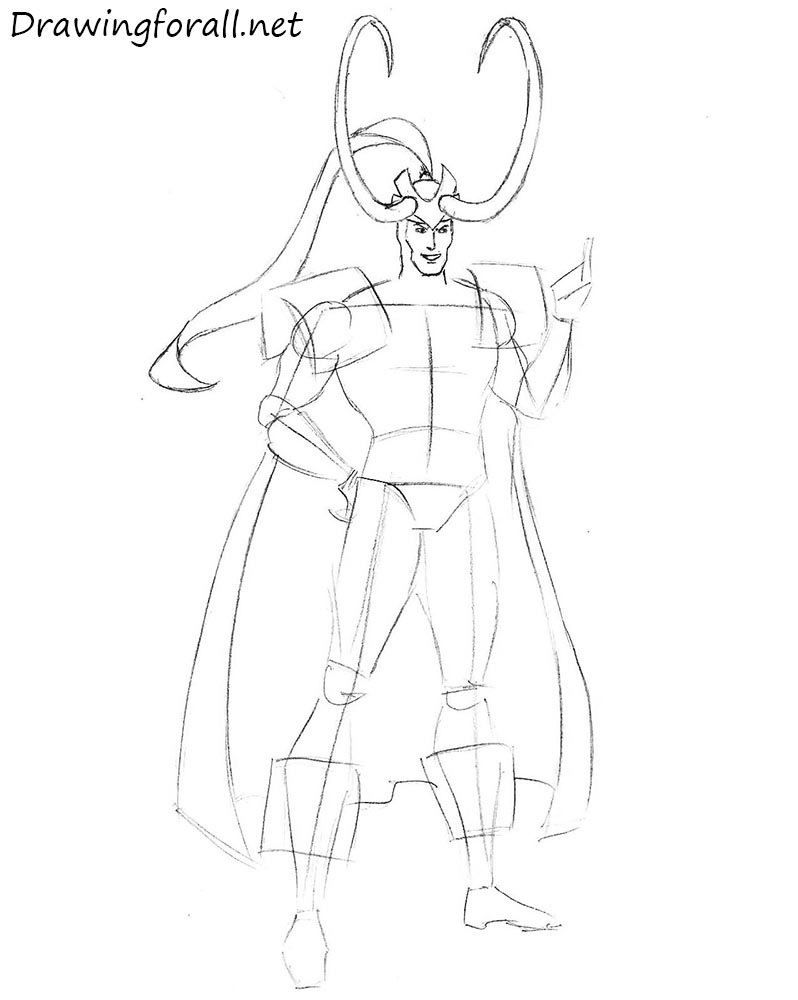 Using pre-scheduled lines, draw the neck and jagged pattern in the collar area. Erase extra guidelines from the neck and spaulders, and draw the spaulders themselves. Armor od Loki should not look heavy, like the armor of knight, they should seem easy and plastic. 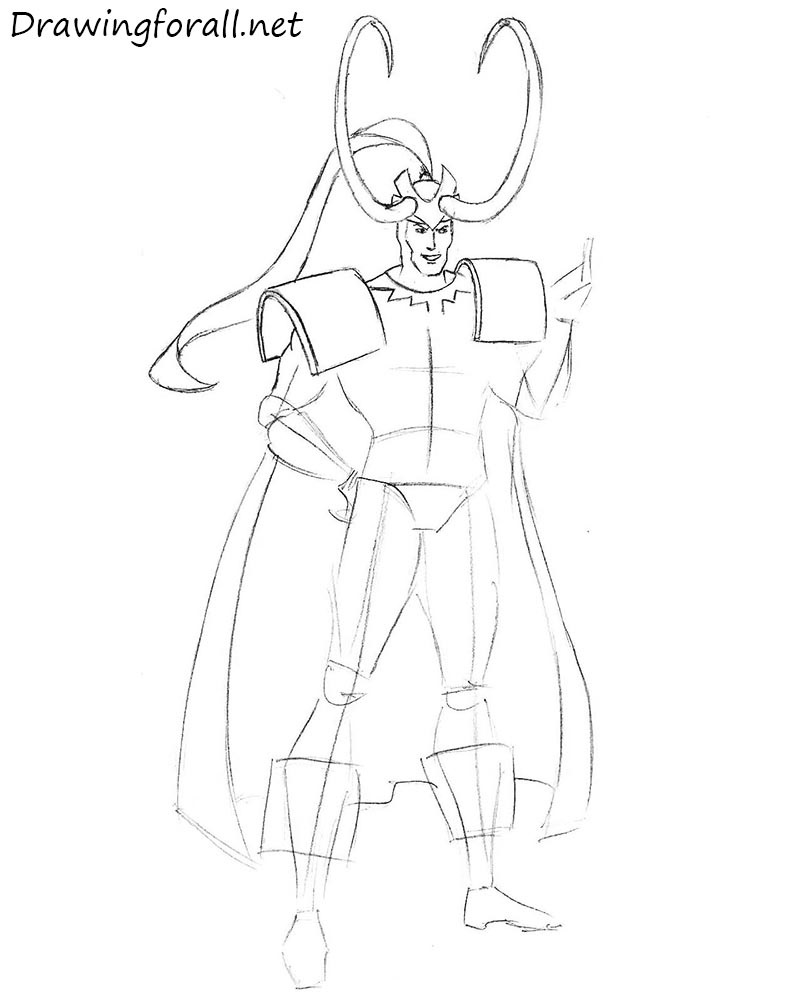 Using the markup from the previous steps, outline well-defined pectoral muscles, outline the oblique muscles and draw a pattern which extends along the entire body. Thereafter erase all guides and strokes and outline the torso, using clear, confident lines. 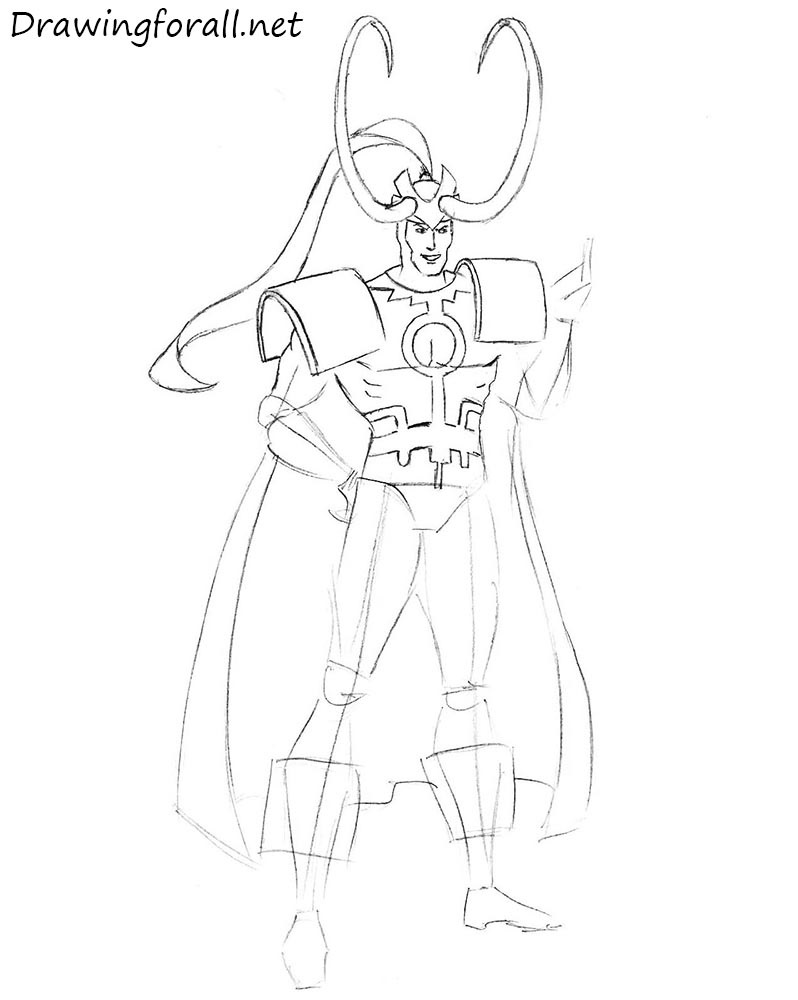 Draw the arms. Carefully erase the guides from the arms and circle the lines of the muscles. Draw the stripes on the wrists, using short lines. At the end of this step draw the hands. 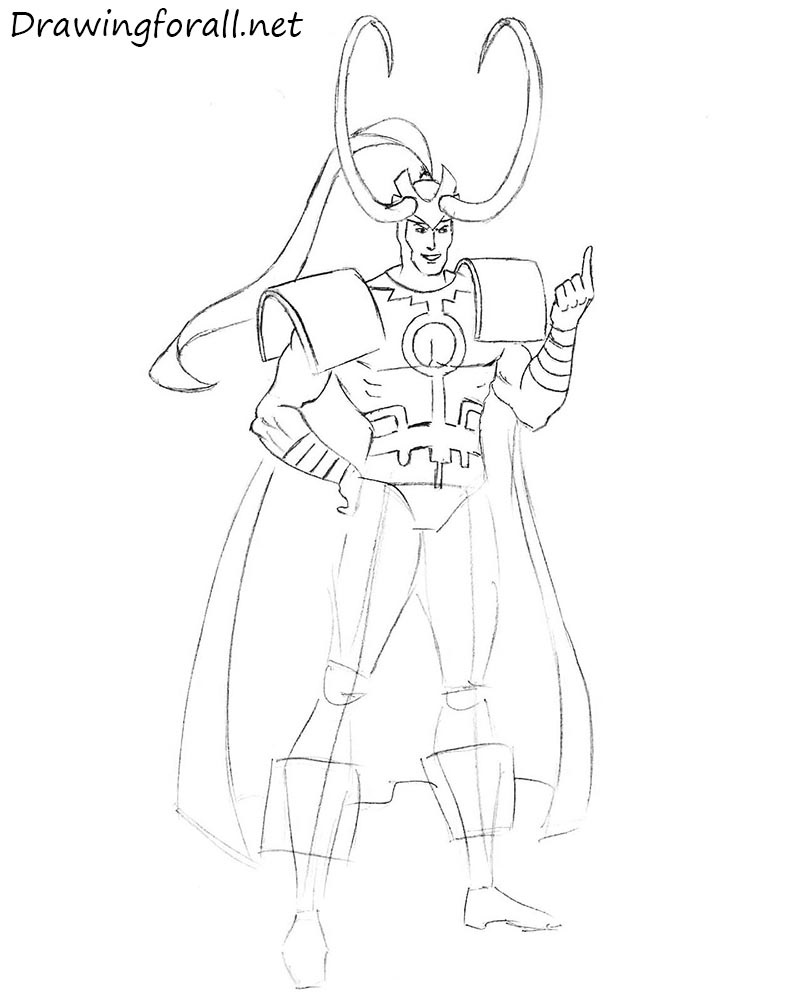 Drawing the smoke that comes off the index finger of the left hand of Loki. Then draw the long element of the clothing on the hip.

Next – the legs. It seems that there is a lot of short strokes, which can be confusing, but it is not. At first outline the contours of the thighs and knees, then using a pair of strokes outline the calf muscles. Erase the guidelines from the legs, sketch out the lines of the muscles. Then draw the lapels on his boots, the folds on the toes of boots and transverse strips in the area of the lower part of the leg. 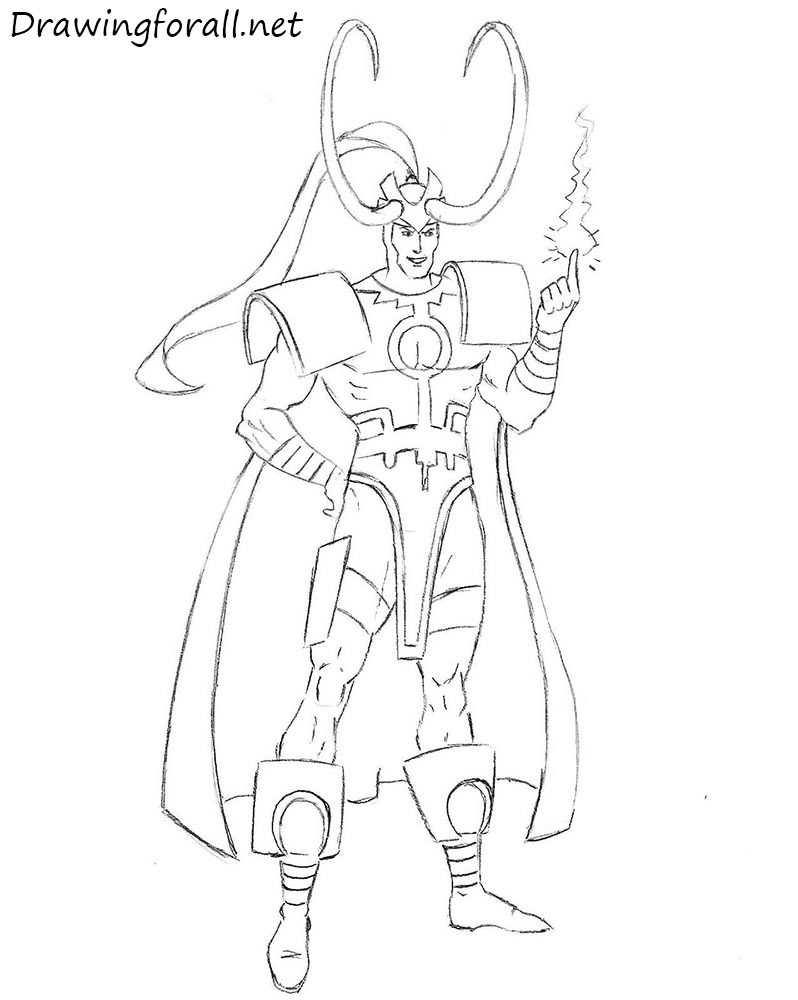 Add shadows to our Loki. As you can see, our current drawing is a classic example of comic book style, that is, the shadows will be contrasting and bright black. It’s best to draw the shadows in two steps – first outline the contour of the shade, and then paint the areas of shadows. To draw halftones, use hatching. 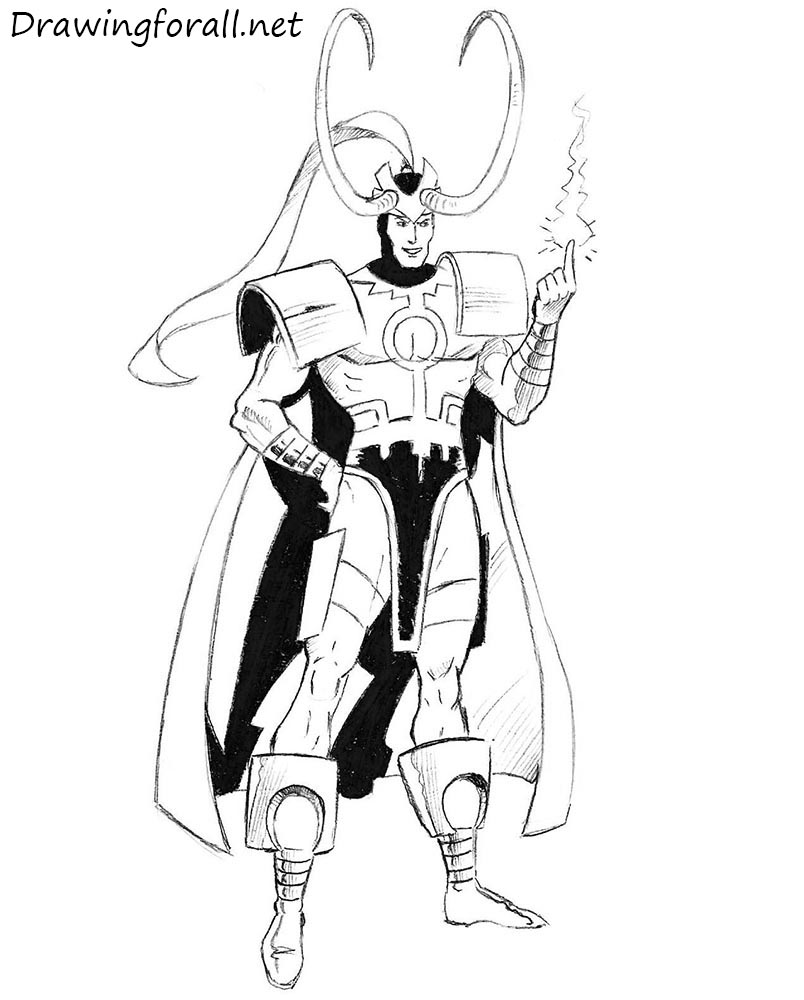 It was a lesson drawing lesson, in which we told you about how to draw Loki. It is not quite simple, and if you could not, maybe you should first practice on easier lessons, for example, the drawing tutorial about how to draw a dog. See you soon on the pages of Drawingforall.net.