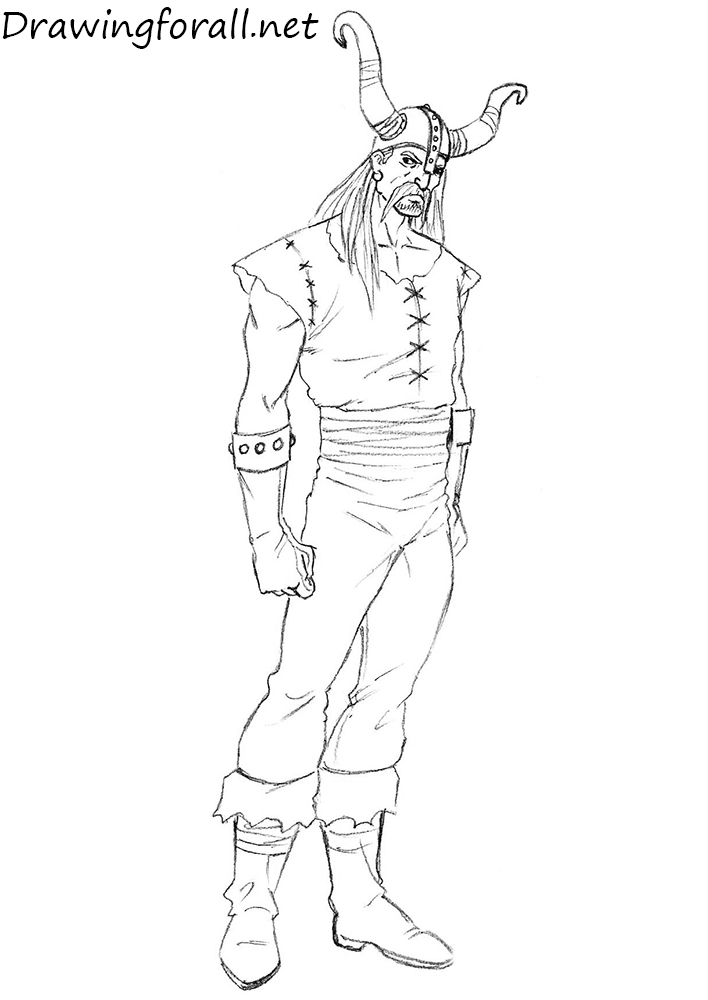 In fact, it was such a North-European version of the pirates who commit, however, the most important geographical discoveries and pave new trade routes. The Vikings also left a large number of legends and myths, creating a set of fictional characters that are popular today, such as sea dragons. Also we would like to recall Nordic gods – Thor, Odin and Loki, who received a second life thanks to the ingenuity of the writers of Marvel. So let’s start the lesson and learn how to draw a Viking in comics style!

Like all lessons in drawing on our website, dedicated to human figure depicted in full growth, this lesson we’ll start with a stickman. Stickman is a man of circles and sticks by which we denote the basic proportions of the character, his pose and the position on the paper. Static posture of our Viking, his tall and stately figure allows us to apply the basic rules of proportions of male figures: 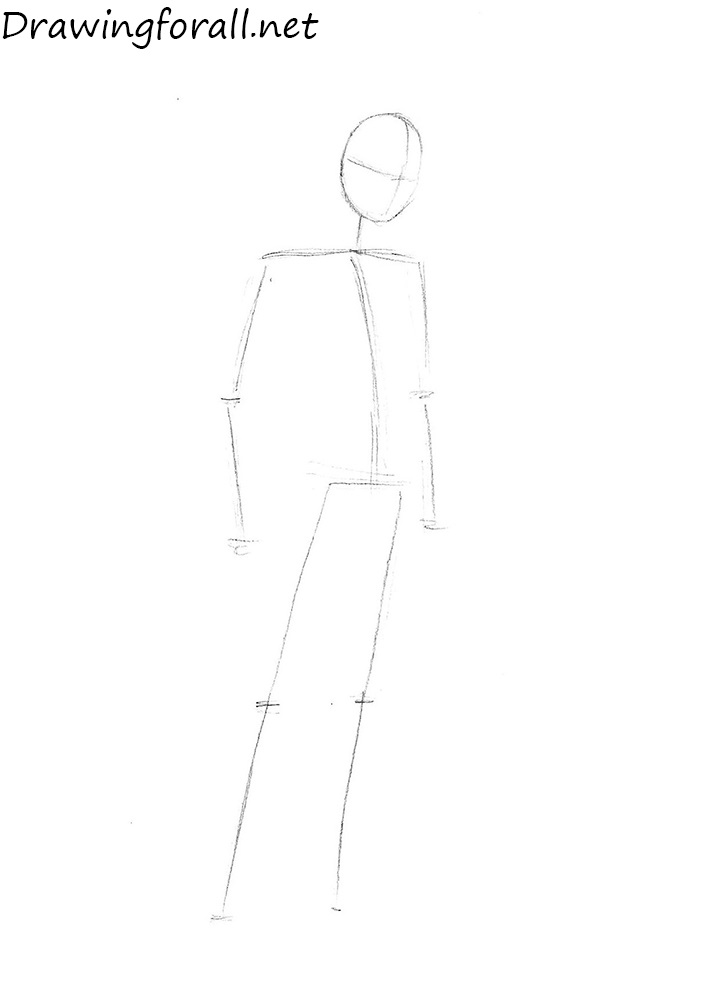 The human body – is extremely complicated mechanism, but in this step we will try to describe it schematically with simple geometric shapes. However, first we need to draw the lines on the face – lines, which will denote the position of the horns on the helmet, as well as lines, which later will converted into the nose and mouth.

Draw the neck, it is a short cylinder, which serves as a reliable support for the head. At the top of the arms draw big circles –  they will mean the deltoid muscles of the shoulders. Then using cylinders draw the arms, and using pentagonal figure outline the fist. Then, using a big, tapering down cylinder draw the torso. Belt and groin area draw using a rectangle and triangle. When you draw the legs, do not forget that the thighs taper in the direction from the waist to the knee. And lower leg have a characteristic angular bulge due to the powerful calf muscles. At the end of stage draw the feet. 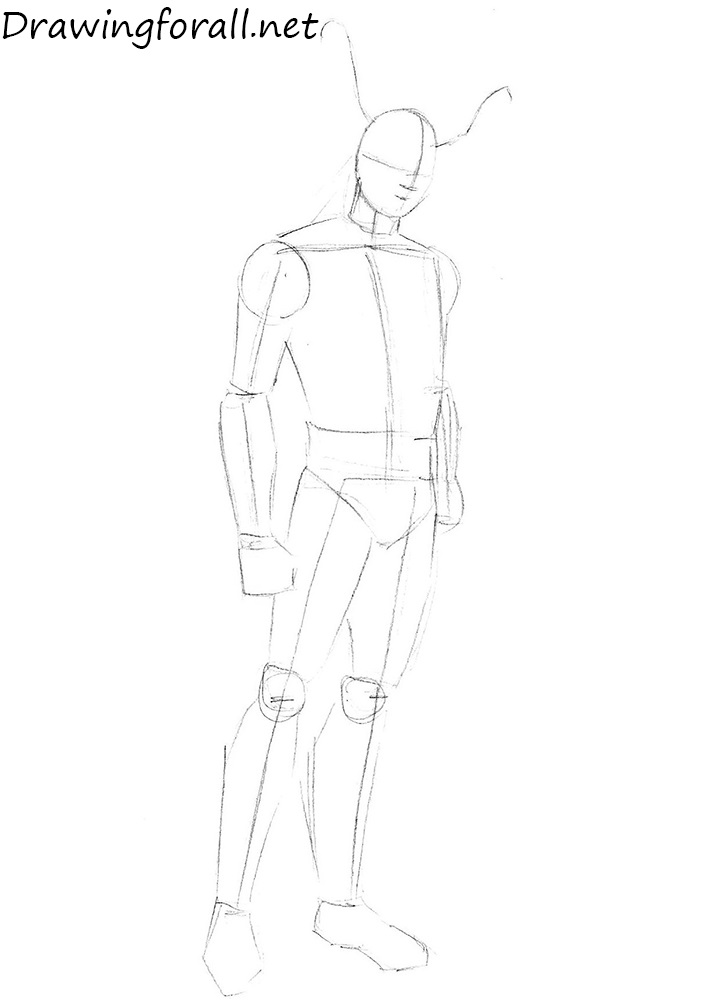 Draw some details that will help us in the future with the final drawing of the character. Using previously planned lines draw the outlines of horns  and sketch out lines of helmet – it should be slightly above the eye line. Then denote contours of hair, that fell over shoulders and go down below.

We sketch lines of short sleeves, short rectangles denote the upper part of the glove. In the same step draw belt line, we outline lapels of the boots, located approximately in the middle of the lower leg. 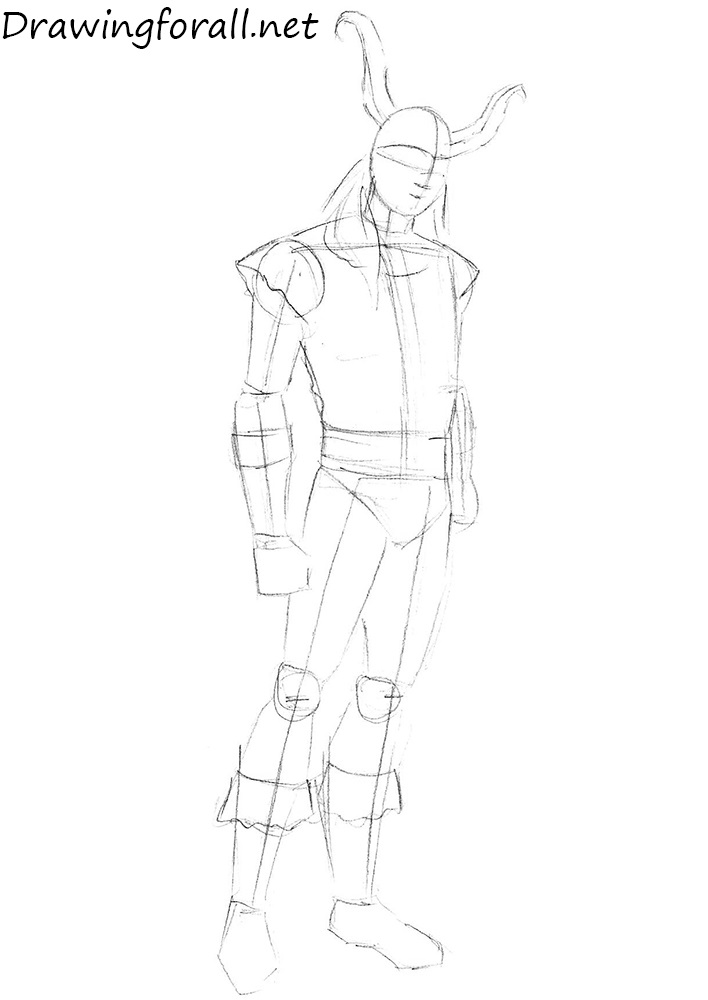 From this step let’s start drawing the details of the horns and helmet. Draw long strip, that covers the nose and going down from the top of the helmet. Draw curved and frowning eyebrows. Draw the eyes, using the lines of the face from the first steps. Also, don’t forget to draw the pupils, which shows us the direction of the view. Using a couple of curved lines draw the wrinkles around the eyes. The upper edge of the ear on the same level with the eyebrows of the warrior, and the lower edge of the ear on the level with the tip of the nose. Don’t forget to draw the earring. Draw a long mustache, hanging below the chin line. 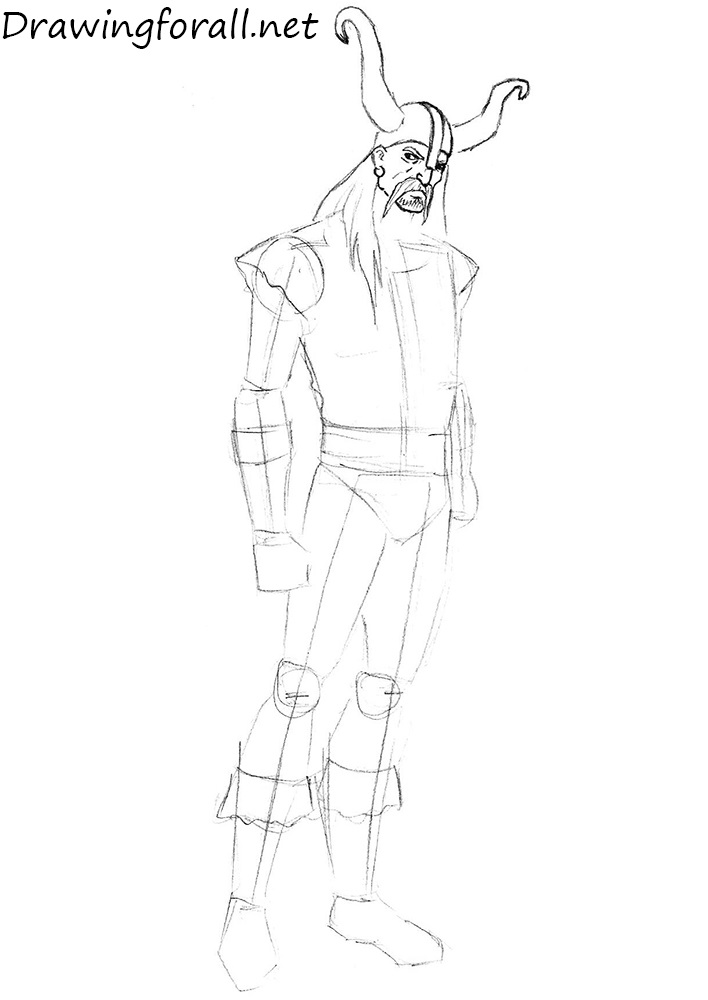 In the same step we draw the hair – the hair line on the head and mustache should be drawn in the direction from the roots to the tips.

We outline the lines of the neck muscles, the shape of the throat and chest muscles, visible upper part of which is similar to the letter “T”. Using uneven line draw the top edge of the torn shirt of Viking. 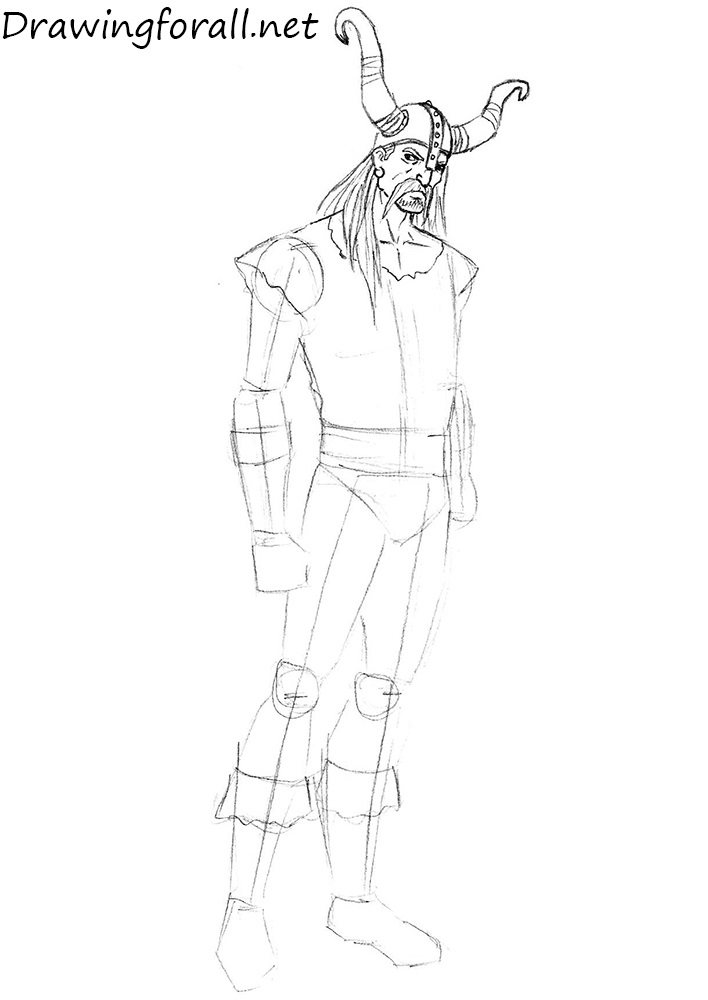 Now let’s work on the right arm of Viking. Using markings from the first steps draw the torn sleeves. Also, draw the contours of the biceps and triceps. Draw the lines of the muscles as in our example. Circle the whole contours of the arms. Draw the patterns on the gloves and shoulders. Add some folds to the area of the wrist and armpit. 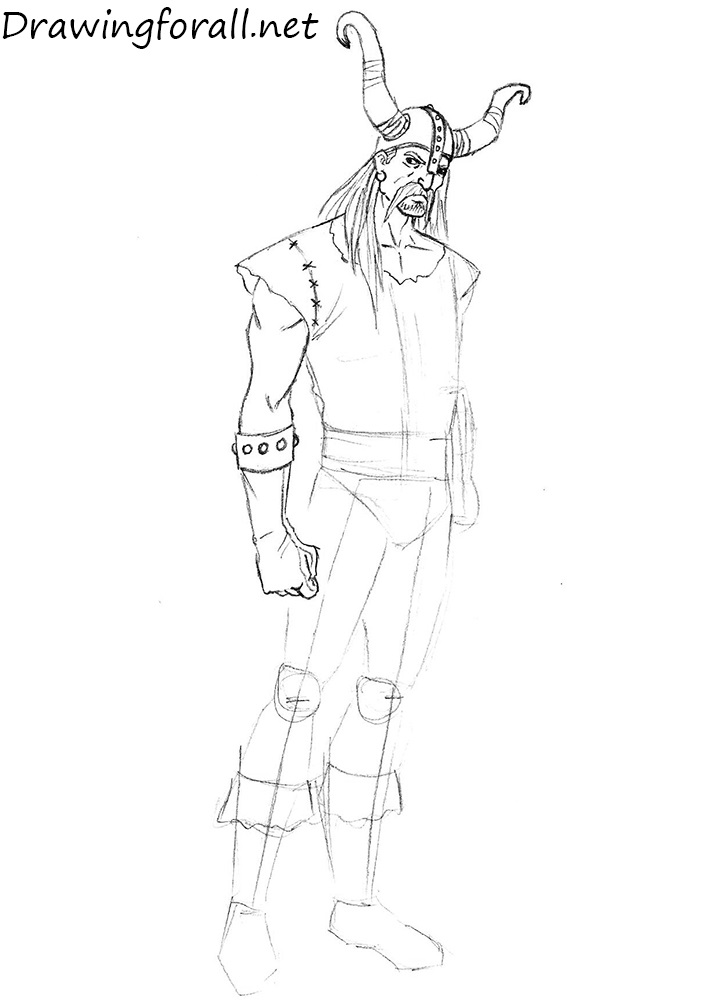 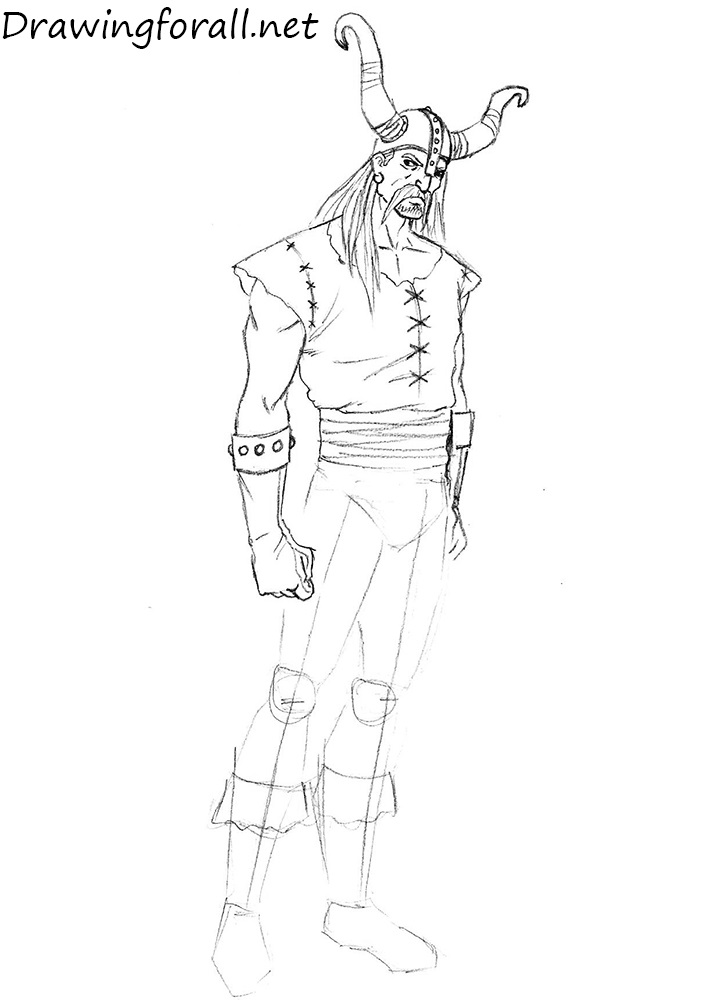 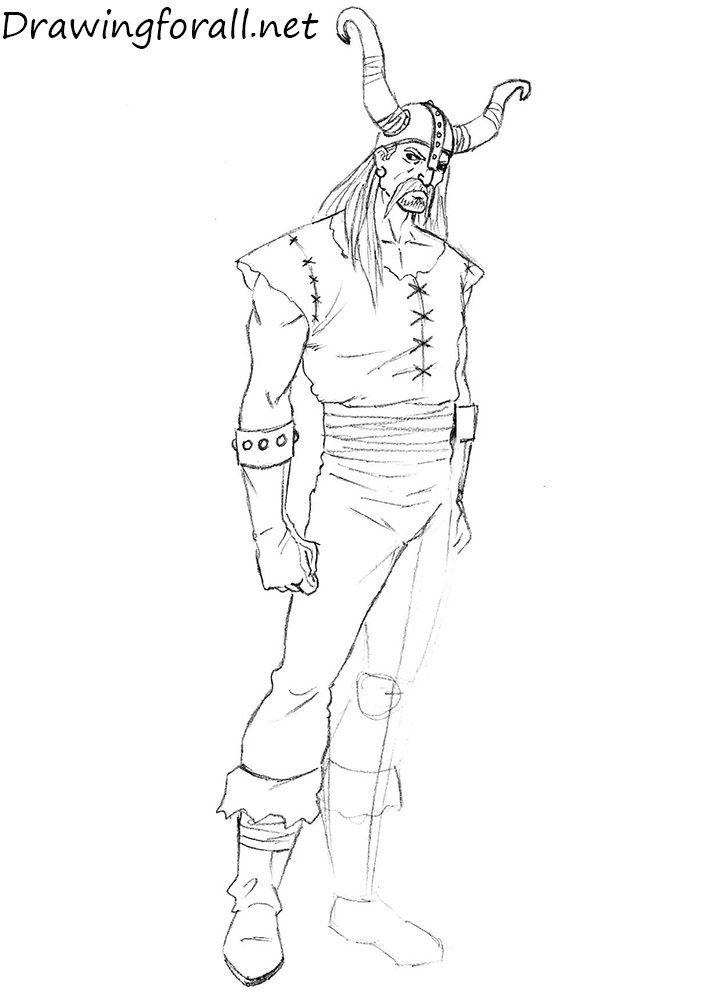