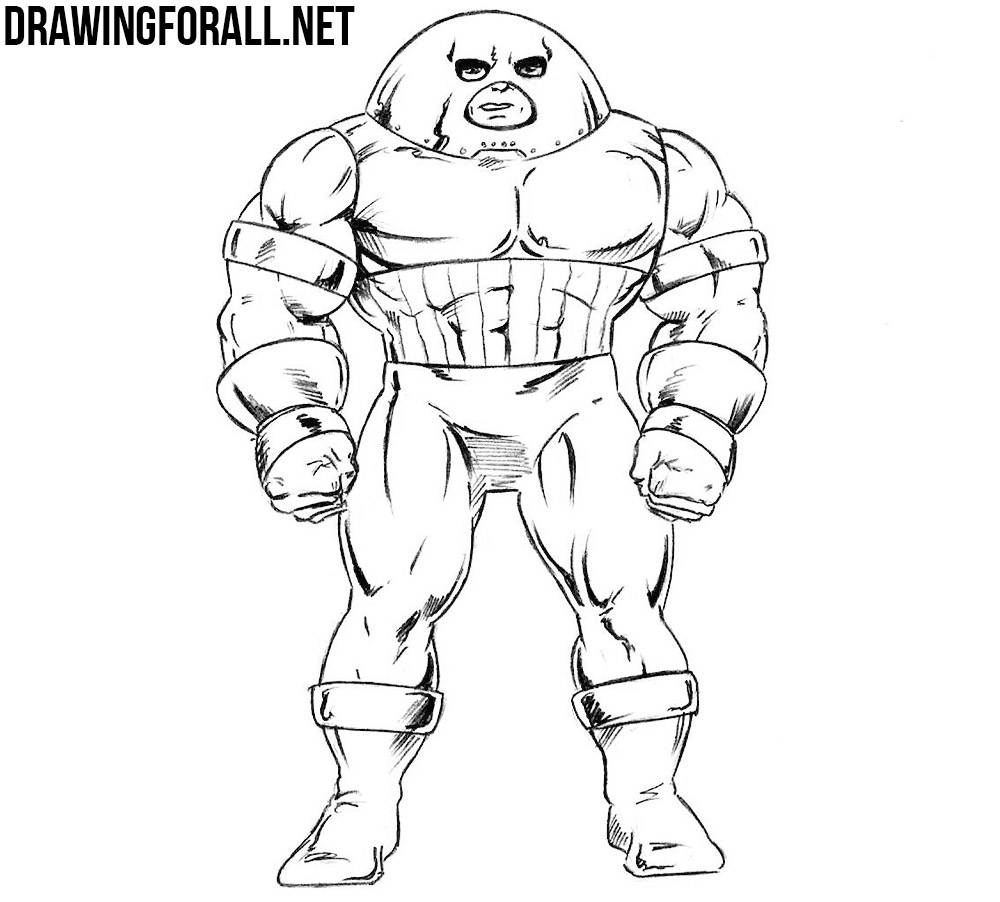 Hello dear readers of Drawing For All! Today we present you a new drawing tutorial about how to draw Juggernaut – a fictional Marvel comic book character created by Stan Lee and Jack Kirby, mostly associated with the X-Men team. 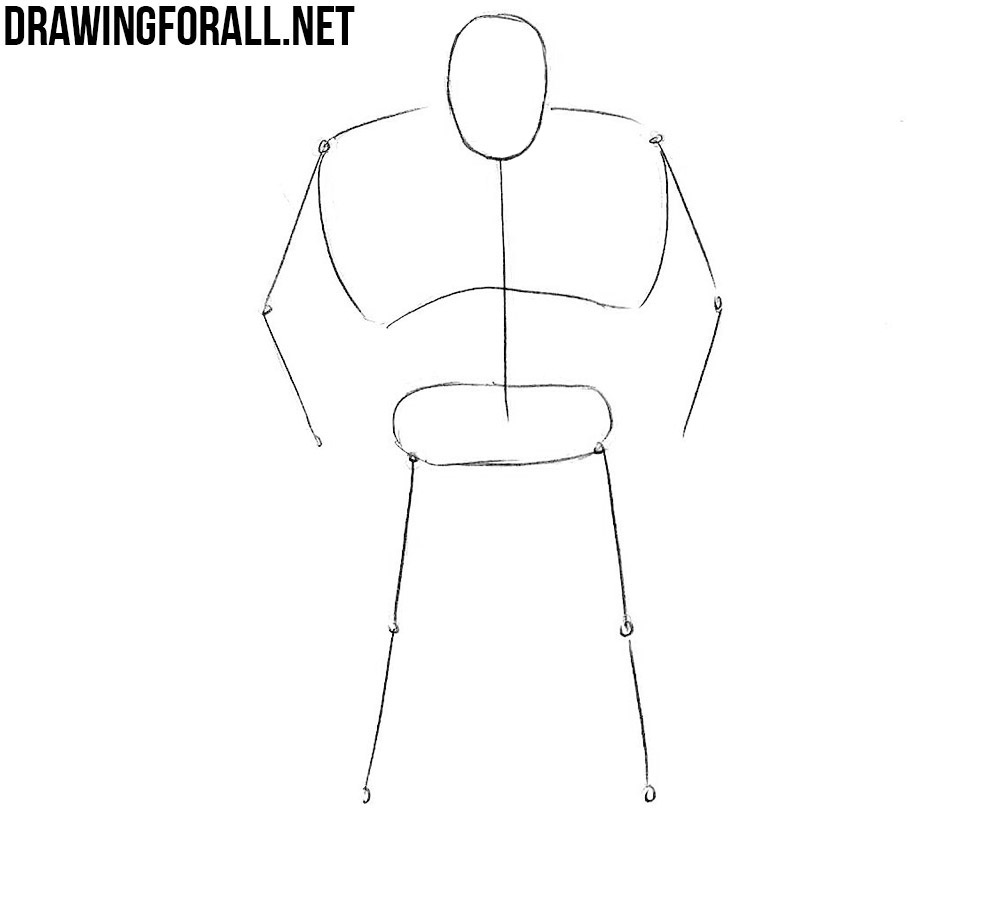 Draw a wide and flat helmet that rests on the shoulders. A little below draw a very wide torso of Juggernaut which slightly narrows to the waist. Do not forget that we must use very light lines. 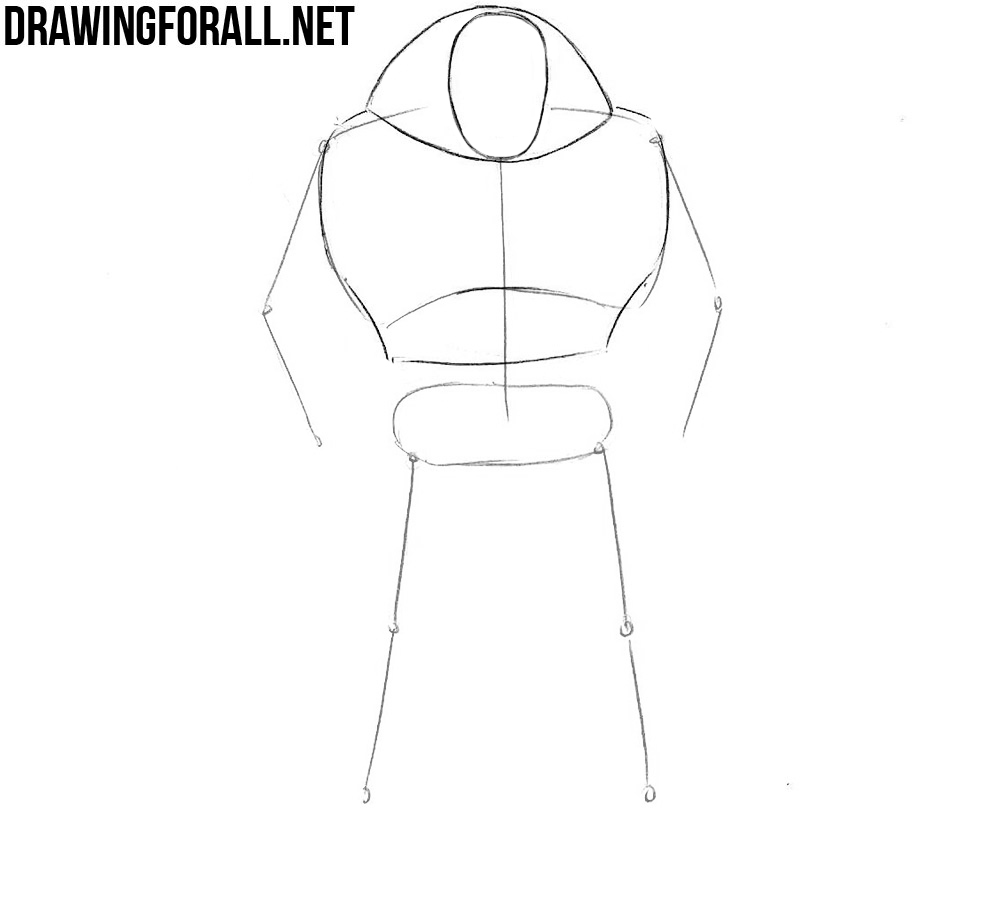 Let’s draw out the limbs of the Juggernaut. Mark out the shoulders in the form of circles, then the arms and fists. Under the torso draw out a triangular pelvis and legs with feet. 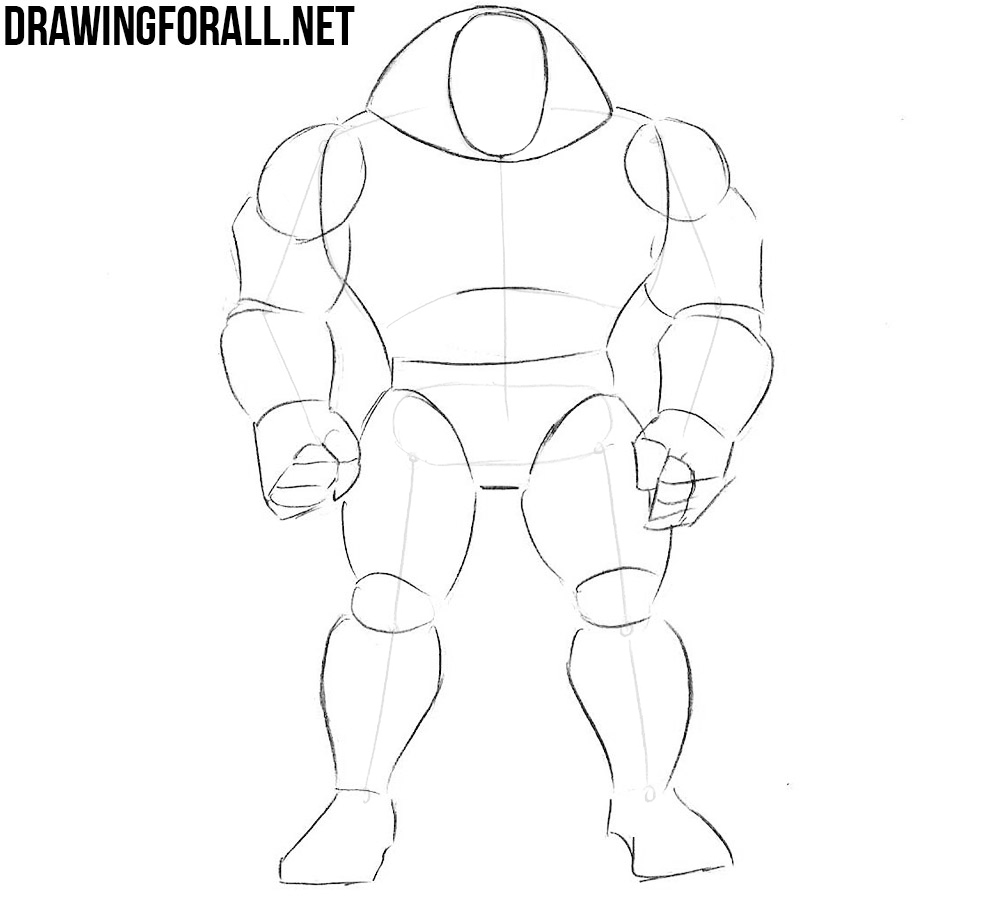 Now let’s start adding some details. Let’s start from the very top, drawing opening for the eyes and mouth. Get down a little lower and outline the pectorals and abdominals. Sketch out the gloves and boots. 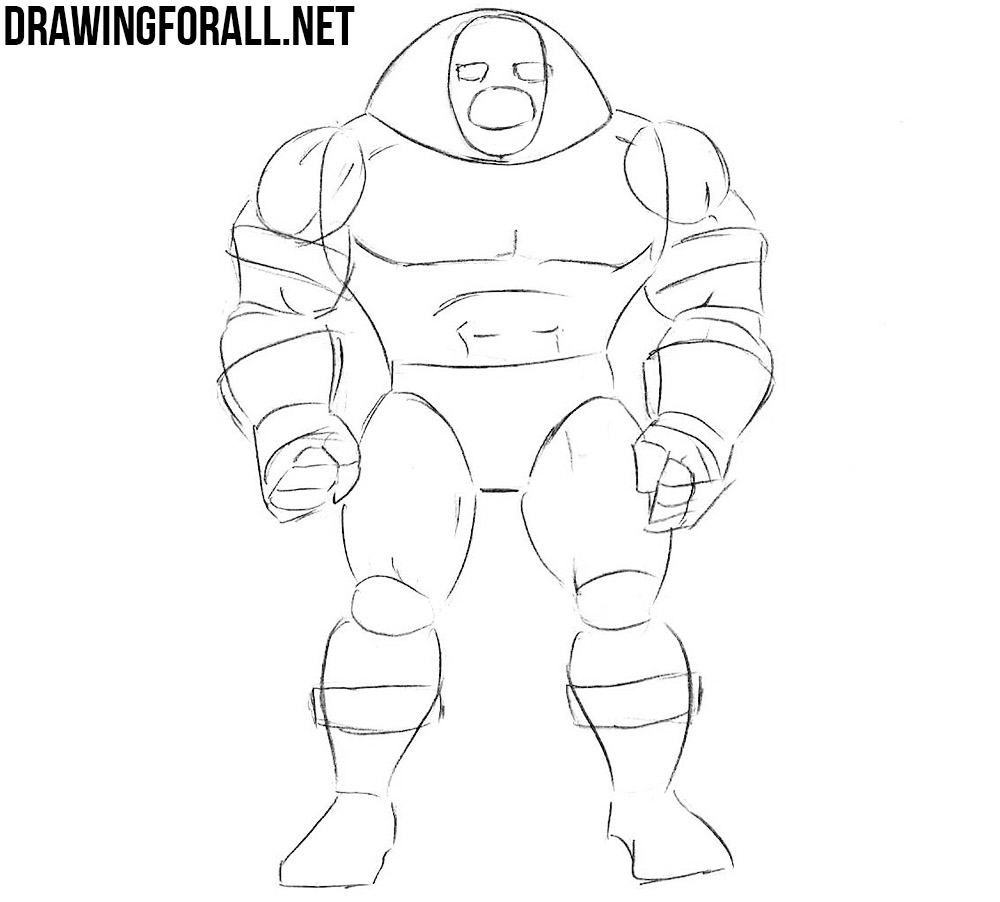 Erasing unnecessary lines from the head carefully draw out the outlines of the helmet and the openings on the helmet. Next, draw the eyes, nose and mouth with a pair of wrinkles around the mouth. Add rivets on the helmet. 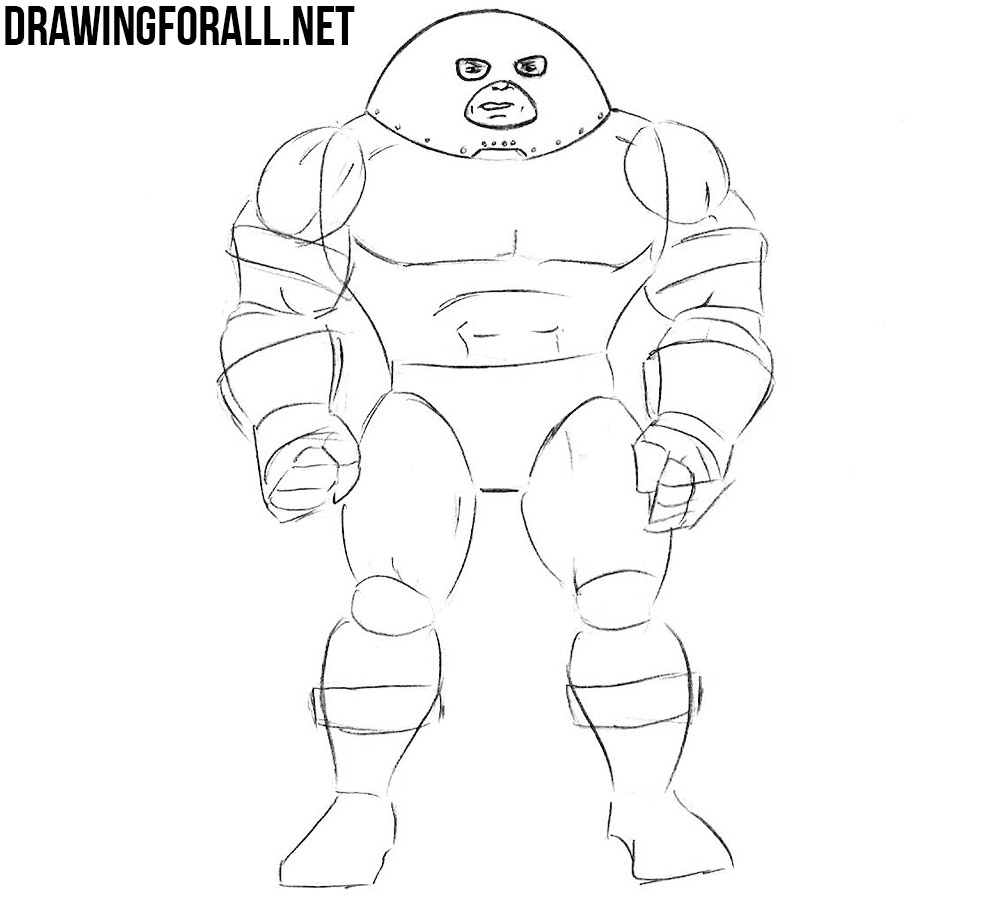 Let’s start adding details to the torso. First of all, we erase all the extra lines from the torso. Next draw huge pectoral muscles and abdominals. Outline the lines of the suit and move on. 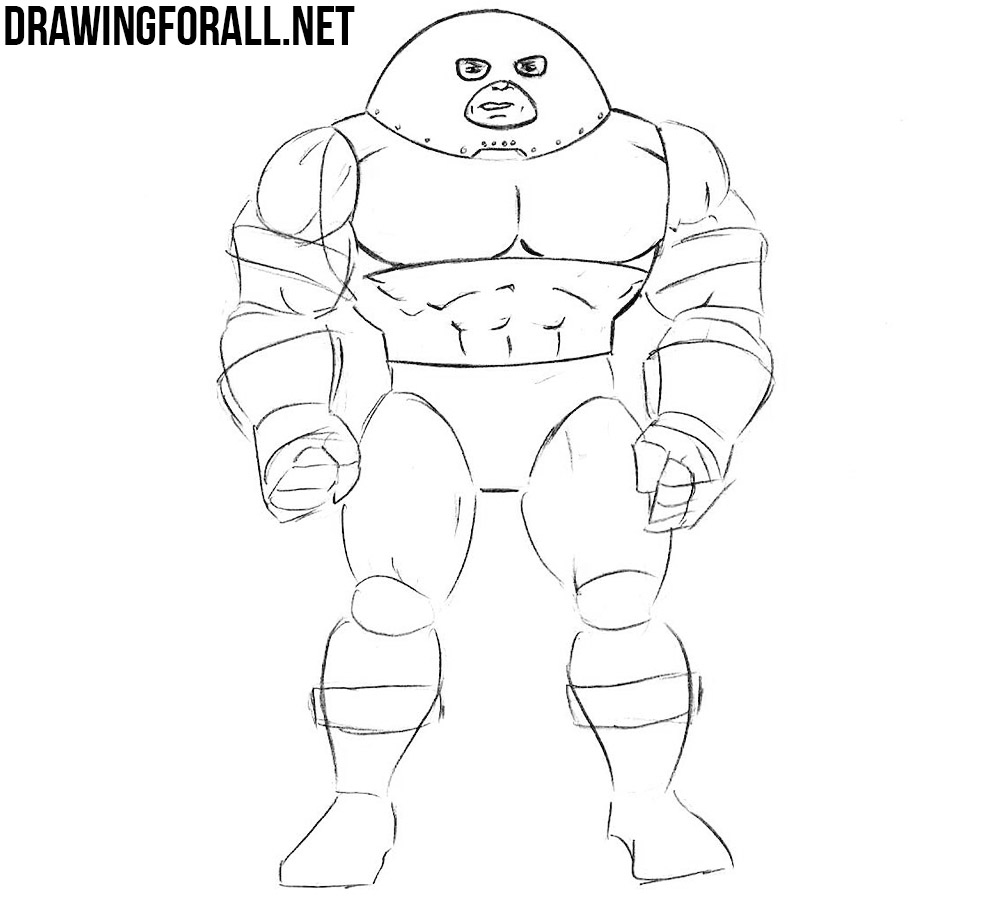 Erasing unnecessary lines from the arms draw out the muscles and details on the arms, such as metal hoops on the upper arms and gloves. Carefully draw tightly clenched fists. 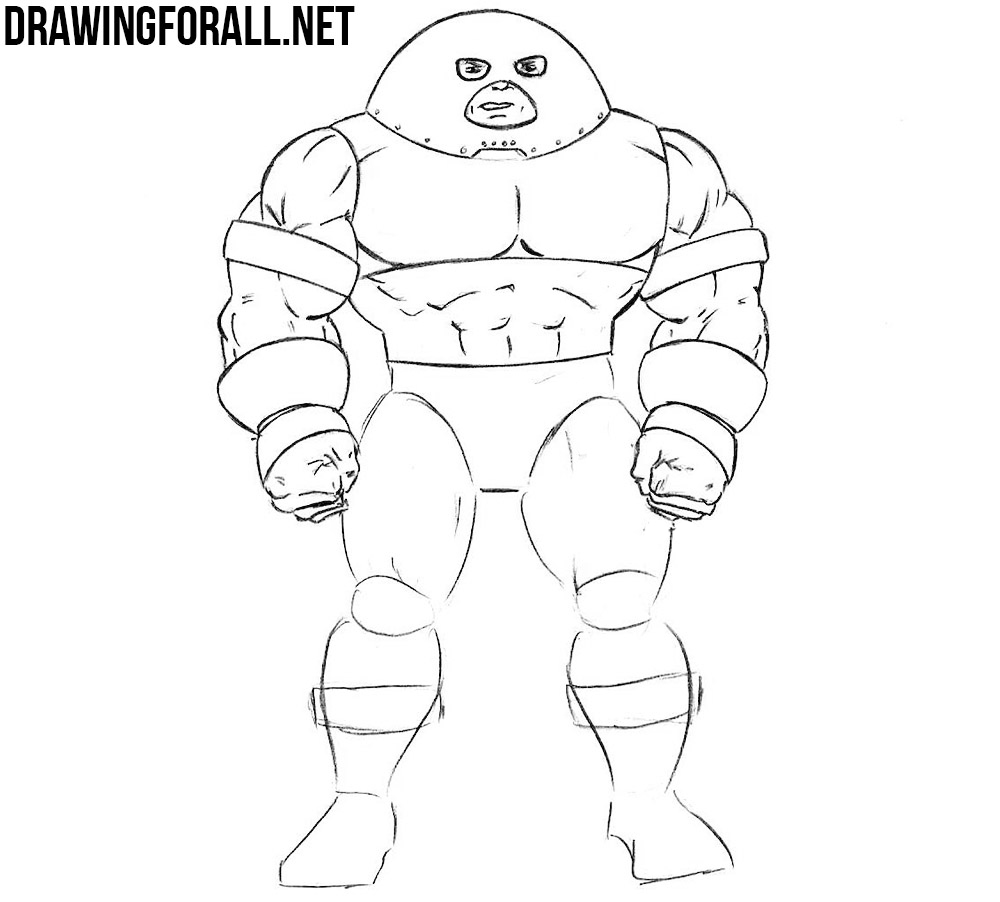 Now let’s draw the legs. We will draw the legs in approximately the same way as the arms in the previous step. That is, we have to erase superfluous lines and draw muscles of the legs and such details as boots and folds on the legs. 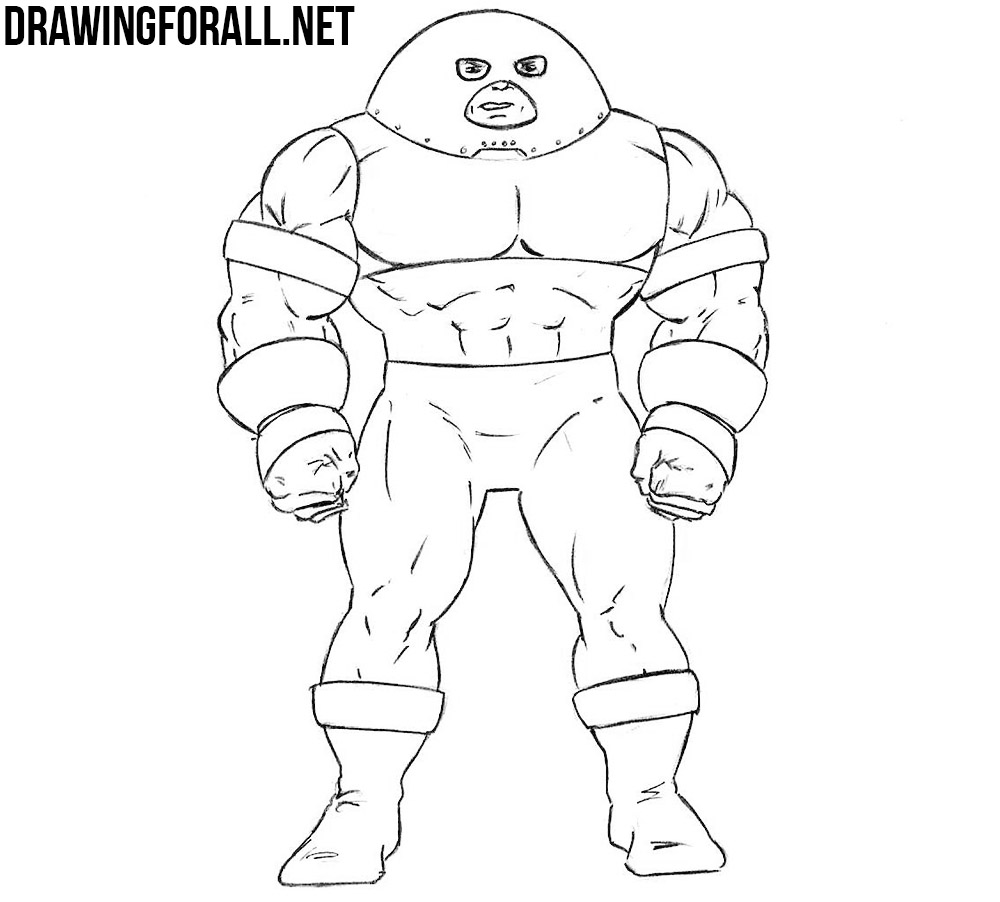 So we on the last step in the lesson about how to draw Juggernaut. Using very dark and thick lines and strokes add shadows. In the same step with the help of shadows we also add a metallic luster to the suit.

We really hope that this lesson was useful for you. If so, then do not forget to share it with your friends and subscribe to us on social networks. Also do not forget that we have a whole section about comics, where you will find lessons about Spider-Man, Wolverine, Iron-Man and many others.