Hello! Today we’ll show you how to draw classic Iron Man! The present name of our today’s hero – Tony Stark, the first time he appeared in the comics in 1963. However, his creator Stan Lee, later admitted that the idea of ​​creating such a character had already appeared in 1939.

Be that as it may, the Iron Man is one of the most famous characters in the Marvel Universe. Along with Captain America and Thor, he is a member of the Avengers team. So, here is the drawing tutorial on how to draw classic Iron Man, scroll down and start learning!

As in other drawing tutorials we start with a stickman, i.e. man made of sticks and circles. Stickman needed to sketch out the position and pose of our today’s character. First sketch out the head, in the shape of an oval, then the torso and limbs, using simple lines. Remember that all the lines should be drawn very lightly, so that later it was simply erase them. 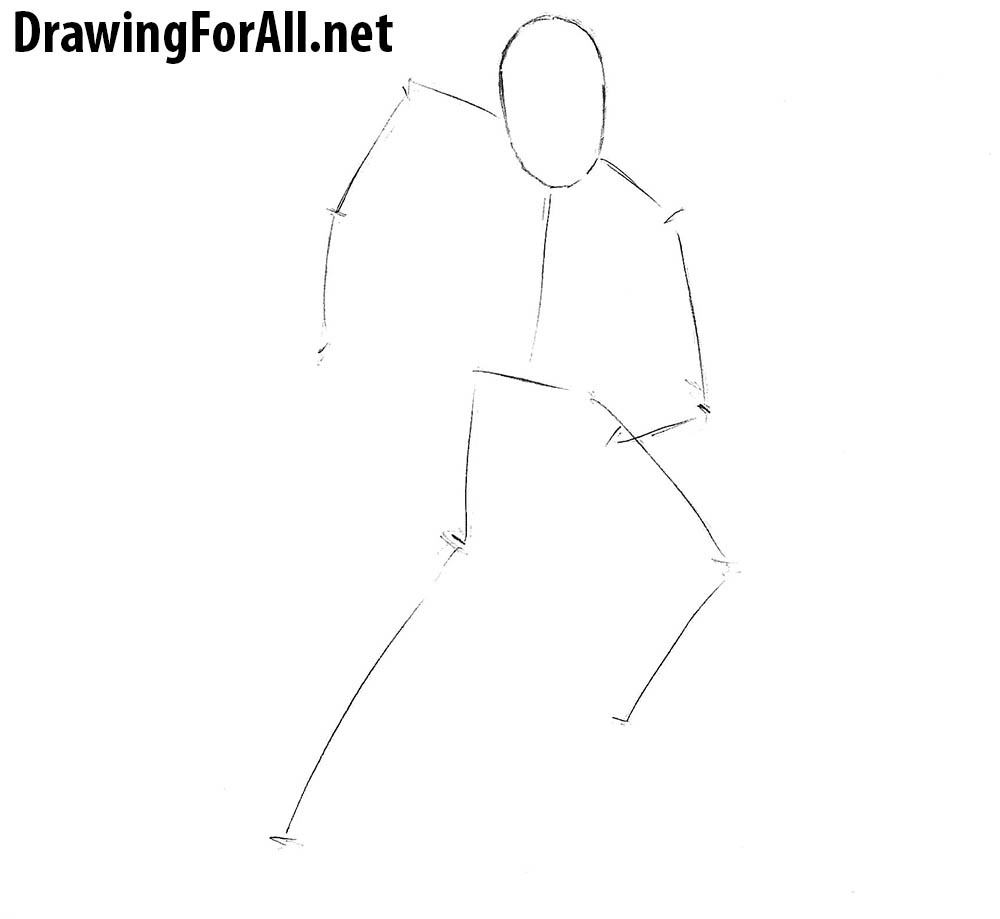 In this step we start adding volume to the figure of Iron Man. But at the first we work with the lines of the face – we need to identify the vertical line of symmetry of the face and the horizontal line of the eyes. Then sketch out the outlines of the torso. On the torso draw a horizontal line, that will help to draw pectorals. Then using circles draw the shoulders. Using figures, similar to cylinders, draw the outlines  arms and legs. 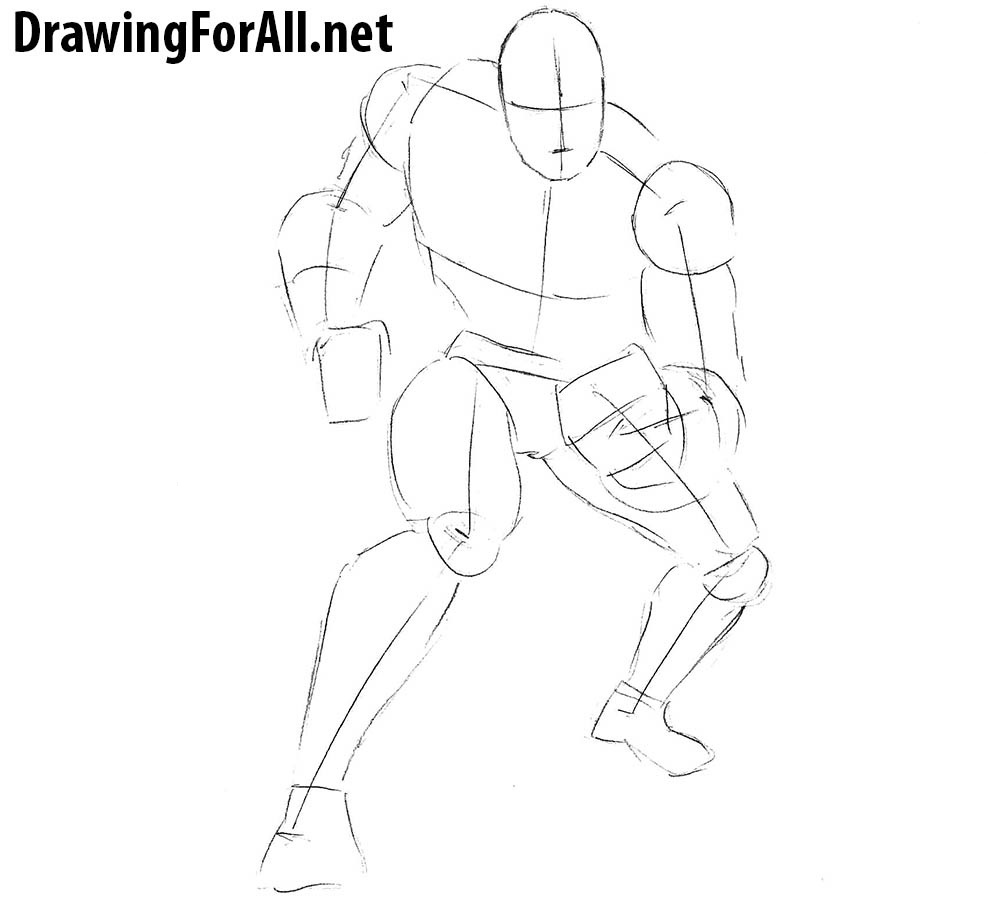 In this step we draw the helmet of Iron Man. It may seem that the helmet is too many lines, but in fact it is not. First, draw a line of the face on the mask, which is similar to the letter “M”. Then, draw the openings for the eyes and the mouth in the form of rectangles. Mark the protruding parts of the mask (forehead, cheekbones and brow lines) with simple lines. And also don’t forget the draw the ears of the mask and line of the neck. 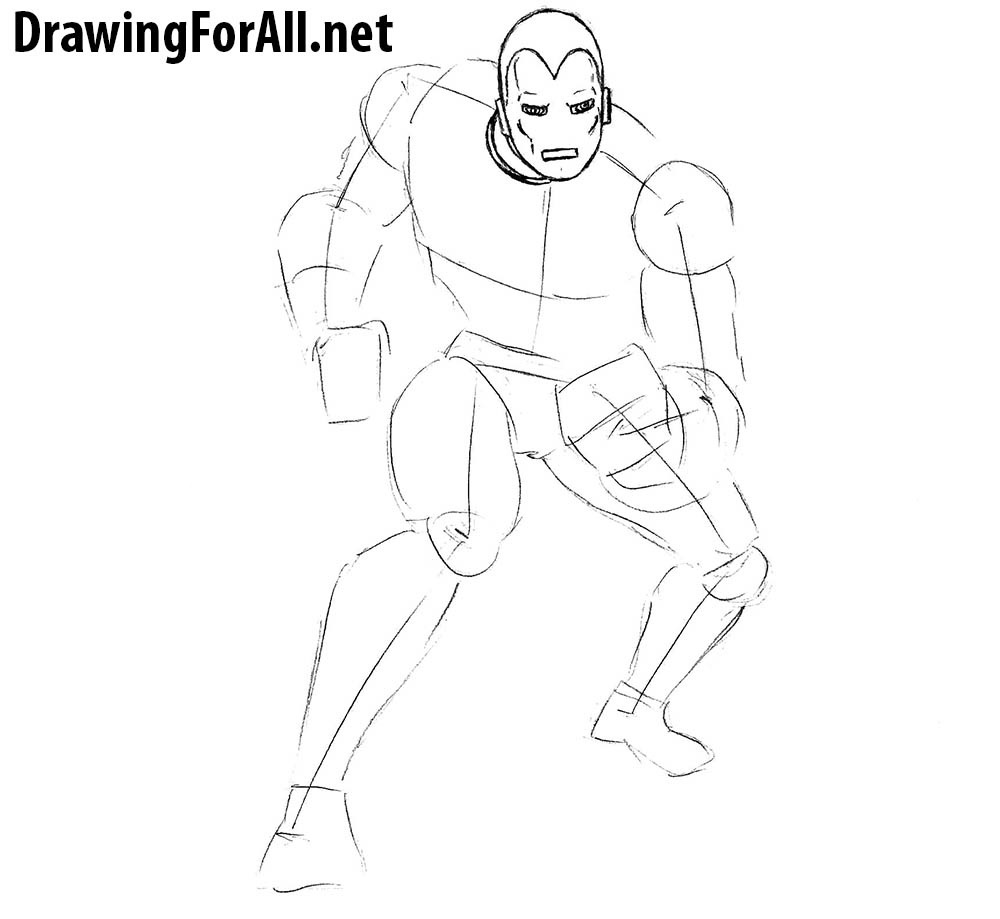 In this step we add details to the torso. Since the costume of Iron Man is the very convenient and repeats all forms of the body, then we draw all the major muscles of the body. First, draw the semicircular metal elements are at the beginning of the deltoids. In the center of the chest draw famous chest plate. On each side of it draw circular elements of armor. Using simple lines draw the pectoral muscles and the lines of the abdominals. 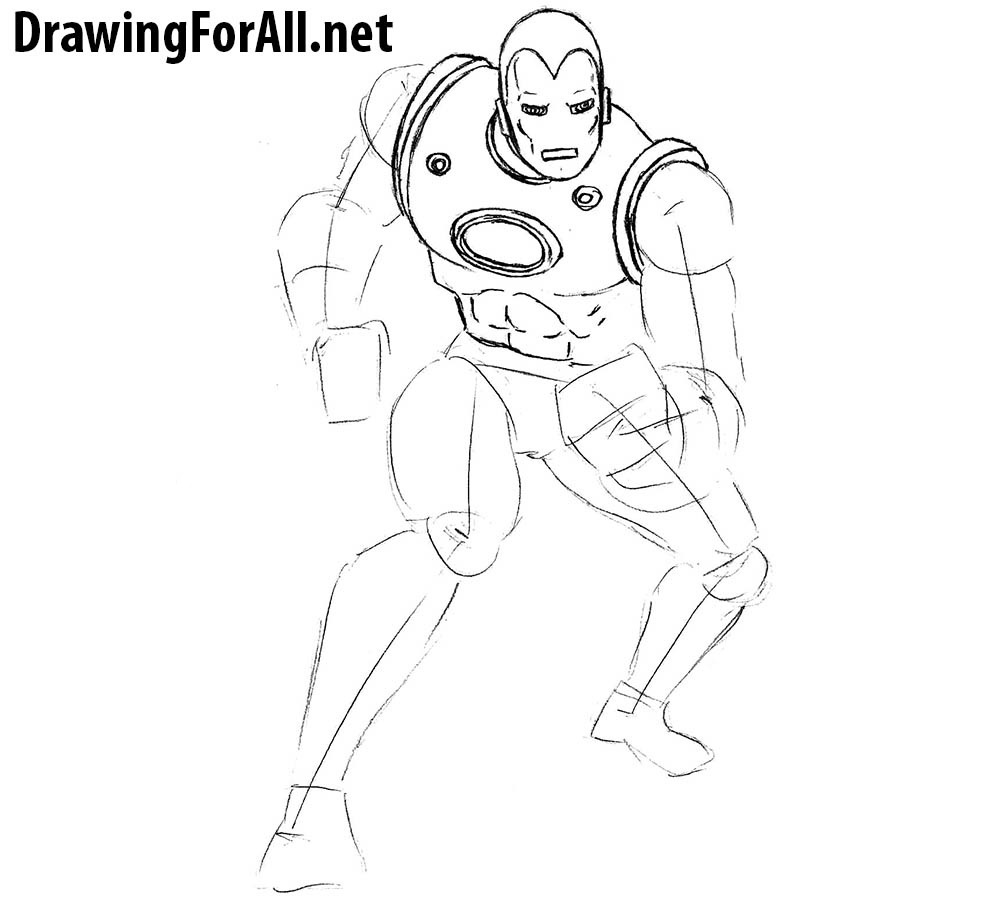 At this stage we will draw the arms of Iron Man. In this step, it seems as if we do too much actions, but in fact it is not. Draw the lines of muscles – deltoids, biceps, triceps. Next, draw the portions of the gloves, protecting the forearms. Draw the fingers and knuckles, as in our example. Using longitudinal lines draw patterns on the forearms and hands of Iron Man. And of course, don’t forget to erase the guidelines, to make the drawing cleaner. 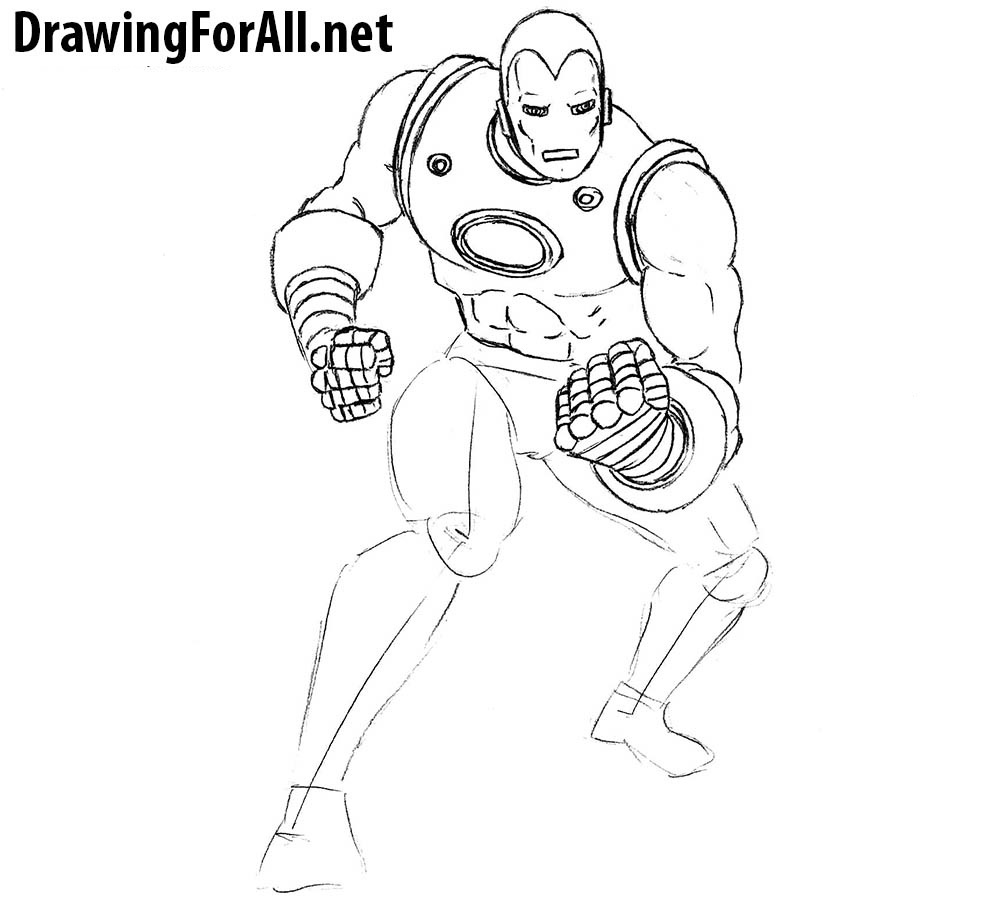 In this step we draw legs of Iron Man, but first we draw the horizontal lines on the groin area. Draw the outlines of the legs – need to give these limbs physiologically correct, smooth shapes. Using a few short lines mark the muscles on the legs of Iron Man. Draw the elements of the costume of Iron Man, located on the calf muscles (these elements are similar to those that we have drawn in the last stage on the forearms). And just as in the previous step, draw the horizontal lines on the shins and feet of Iron Man. 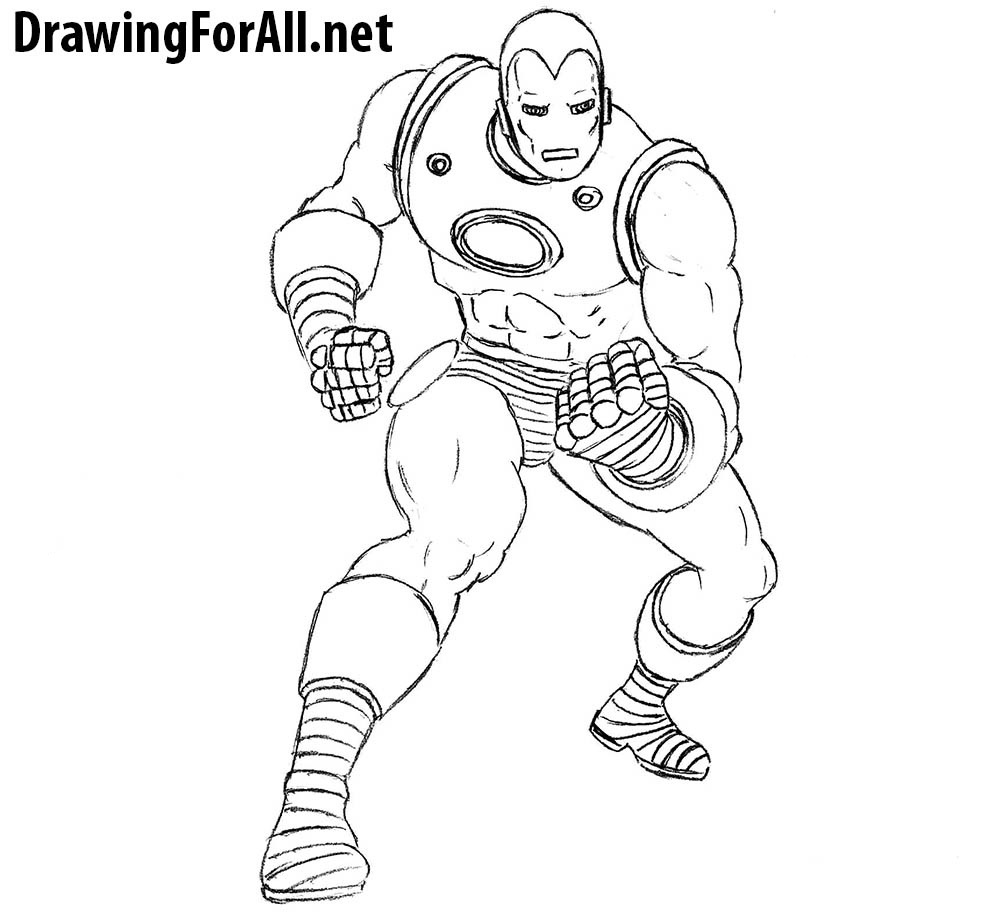 In the final step of the tutorial on how to draw classic Iron Man we draw the shadows. In fact, the imposition of the shadows there will be a fairly simple procedure, because today’s Iron Man is a classic representative of comics style. In the comics are usually used very contrast and dark shadows. Shadows in today’s drawing tutorial should be applied in two stages – first draw the outline of the shadow, lightly clicking on the pencil, then paint over the areas of shadows. Partly complexity of this drawing lesson is that the shadows should emphasize the metallic gleam of the Iron Man suit. 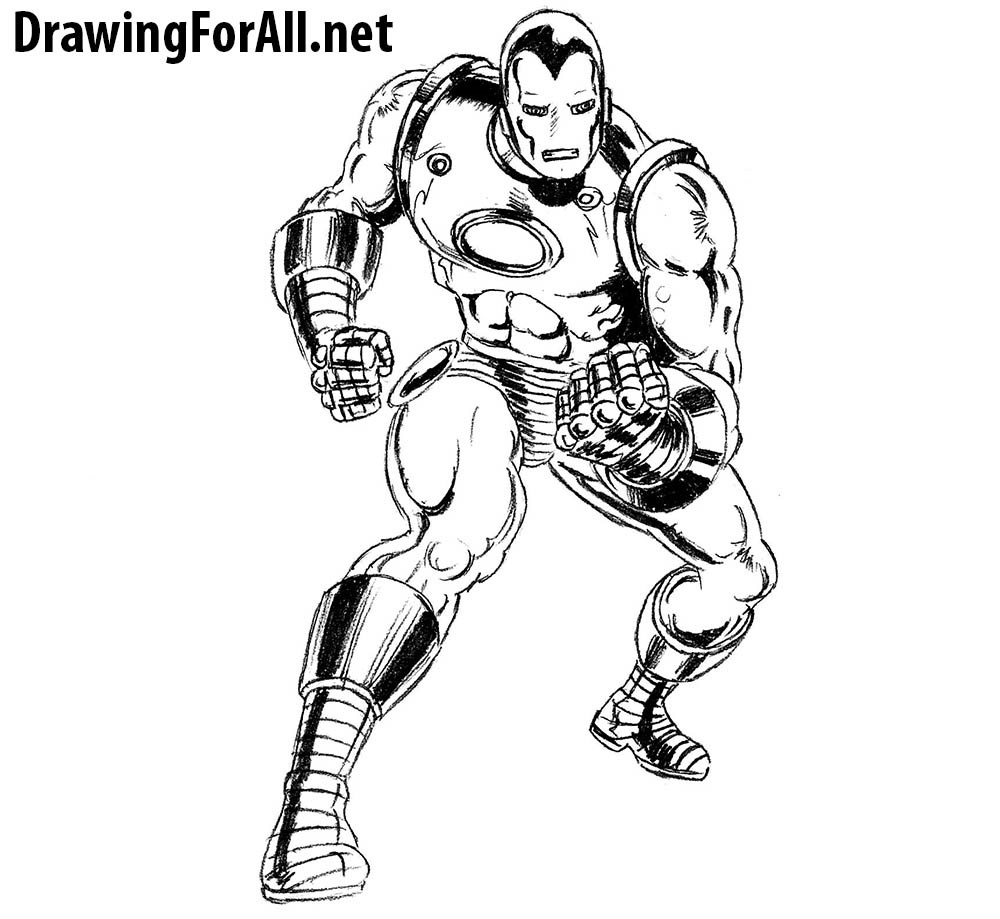 It was a drawing lesson by artists of DrawingForAll, stay with us and learn to draw even steeper and more difficult!