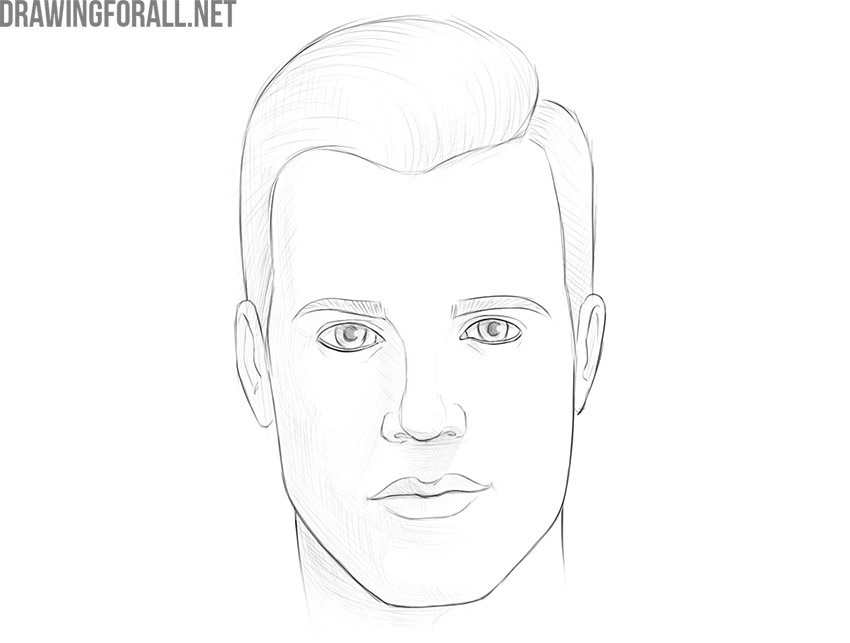 In this tutorial, we will show you how to draw a male face. Here we will tell and show all the features of drawing a male face.

All faces are similar in structure, but they have many small differences. It is thanks to these differences that we distinguish some people from others.

Male faces, like female faces, have their own characteristics. In this lesson on how to draw a male face, we tell you in detail about all these features and characteristics and how to convey them on paper.

So, if you are ready, then let’s proceed directly to the steps and learn how to draw a male face.

Start drawing a male face by sketching an oval for the head. Already at this stage, we set the outlines of the future head. One of the first and most important differences between a male face and a female is that usually, a male face is larger and has a larger chin, while a male face tapers quite noticeably in the chin area. 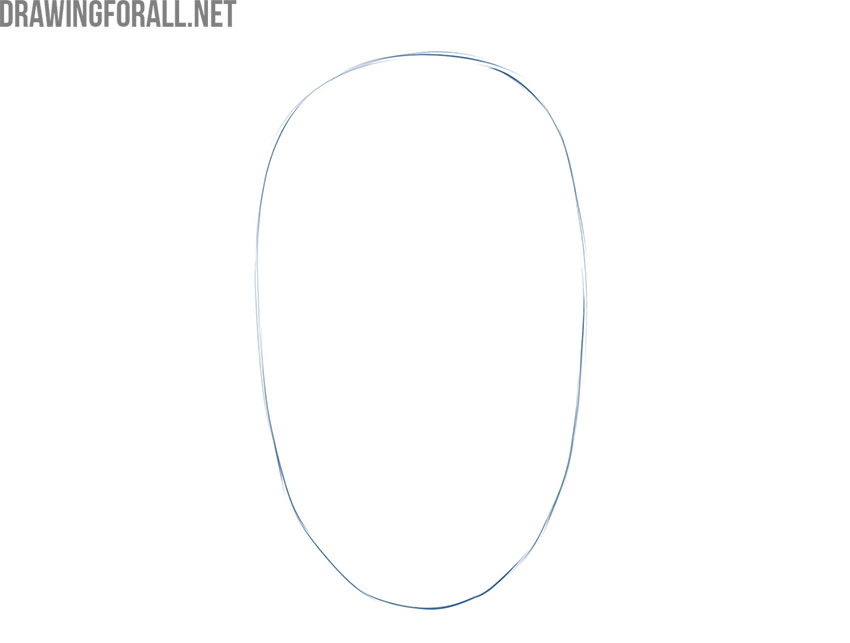 In order to draw the details of the face, and not be mistaken in the proportions, it is necessary to sketch some constructive lines. Start with a vertical line that runs straight through the center of the face. Next, sketch out a horizontal line. On a vertical line, mark the location of the beginning of hair growth, nose, and mouth. Mark the location of the corners of the eyes on a horizontal line. We talked about all this in detail in our article on the proportions of the head

Using the construction lines drawn earlier, draw the eyes. With smooth lines draw the upper eyelids first, then the lower ones. Mark the lacrimal caruncleы in the inner corners of the eyes. Try to make the eyes look voluminous, as shown in our example. In the lesson on how to draw eyes, we talked in great detail about this. 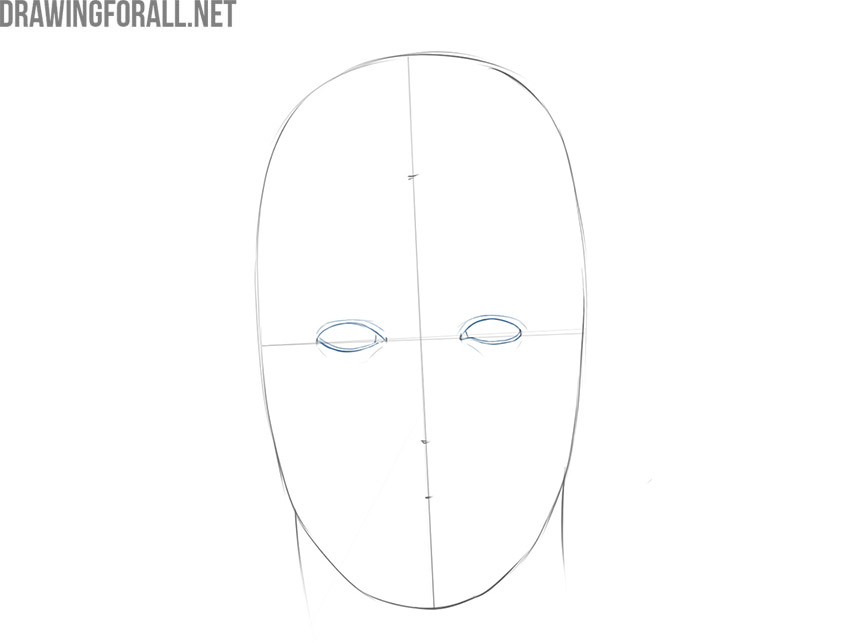 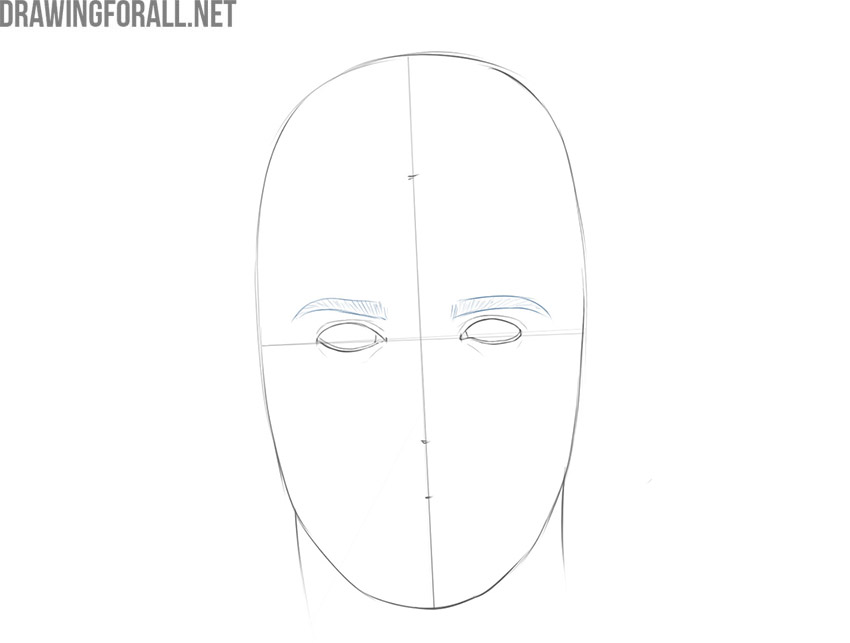 Now it’s time to draw the pupils inside of eyes. Start by drawing the outlines of the irises. Next, draw the pupils, which should have a perfectly round shape. The upper and lower edges of the irises should be slightly covered by the eyelids. When drawing symmetrical details such as eyes, do not focus on one part. Constantly move from one to the other so that both parts are equally correct and symmetrical. 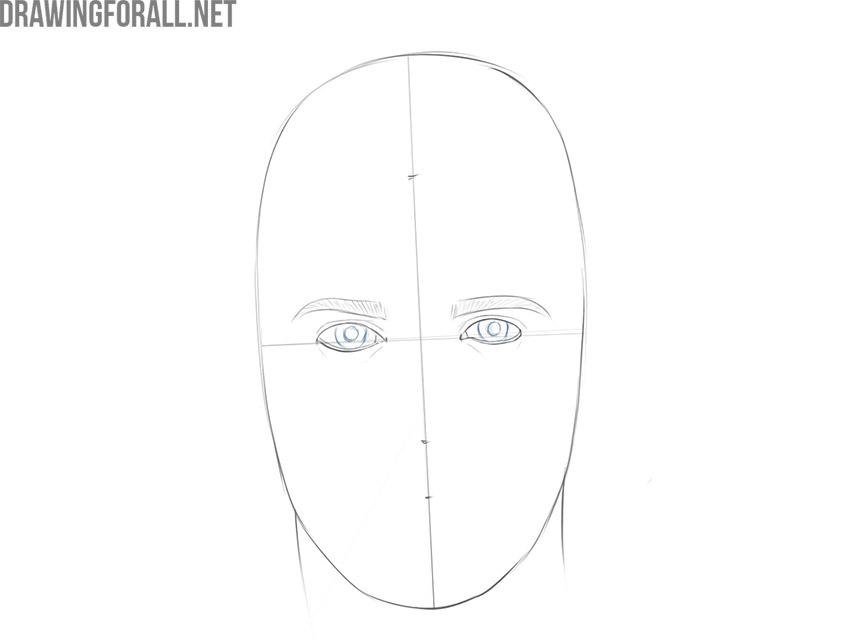 Draw the nose. Start by drawing the tip of the nose, using the construction lines sketched earlier. After that draw the outlines of the nostrils. Draw the contours of the back of the nose with smooth and long lines. Another distinguishing feature of the male face is that the male nose is often larger than the female. 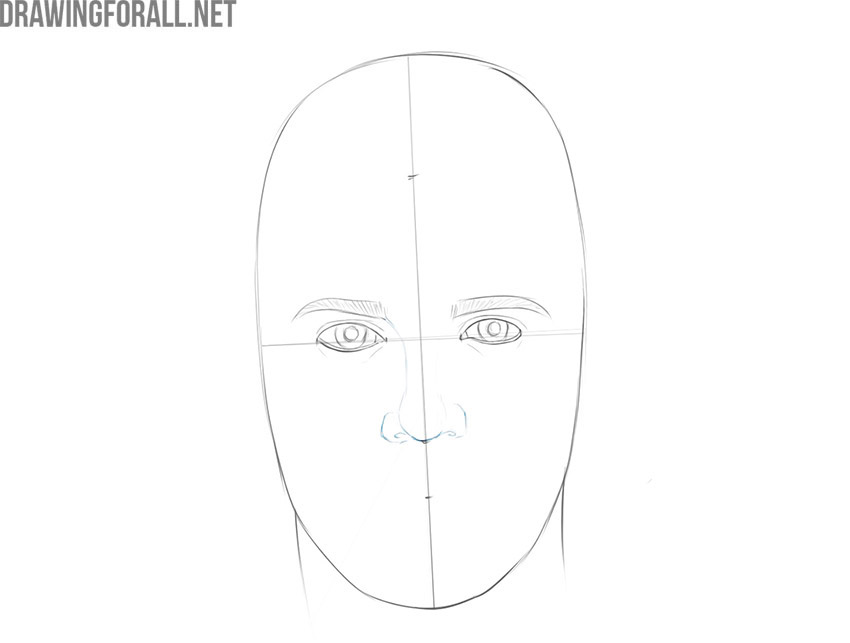 Draw the mouth. First of all, using the construction line sketched earlier, draw the middle line of the mouth. After that draw the contours of the upper lip and lower lip. Male lips are often thinner than female lips. But this, of course, is not an unbreakable rule. As you can see, the man in our drawing has quite plump lips. 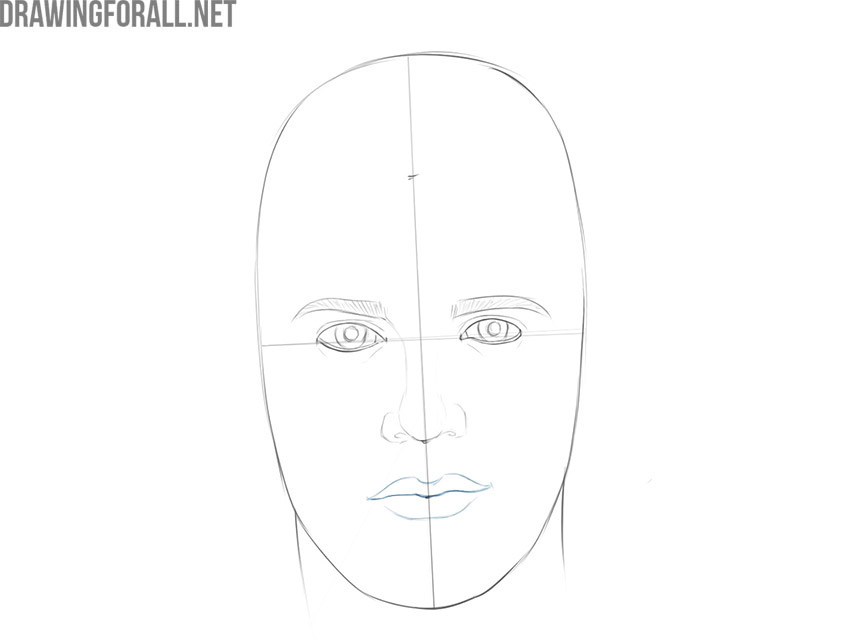 Draw the jaw and ears. First, draw the jawline making the lower part of the face more angular. As we have said, the male jaw is usually larger and more angular than the female. In this step, this feature should be depicted. Draw the outlines of the ears, then the lines of the cartilage. 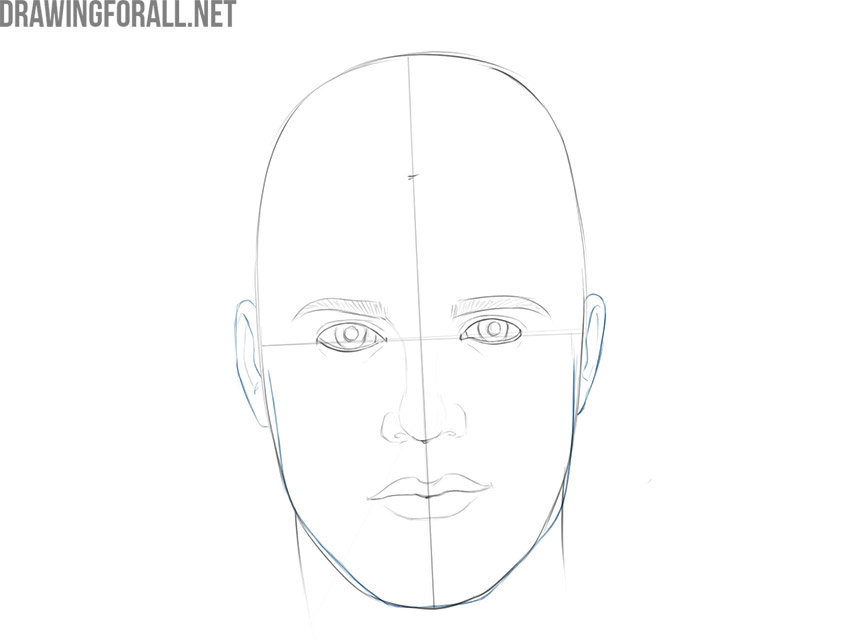 Now go back to the top of the head again to draw the hair. Here we decided to draw a classic men’s hairstyle with a side comb. On the sides, the hairstyle should be less voluminous than on the top. You can of course draw any other hairstyle. You can also add a beard. 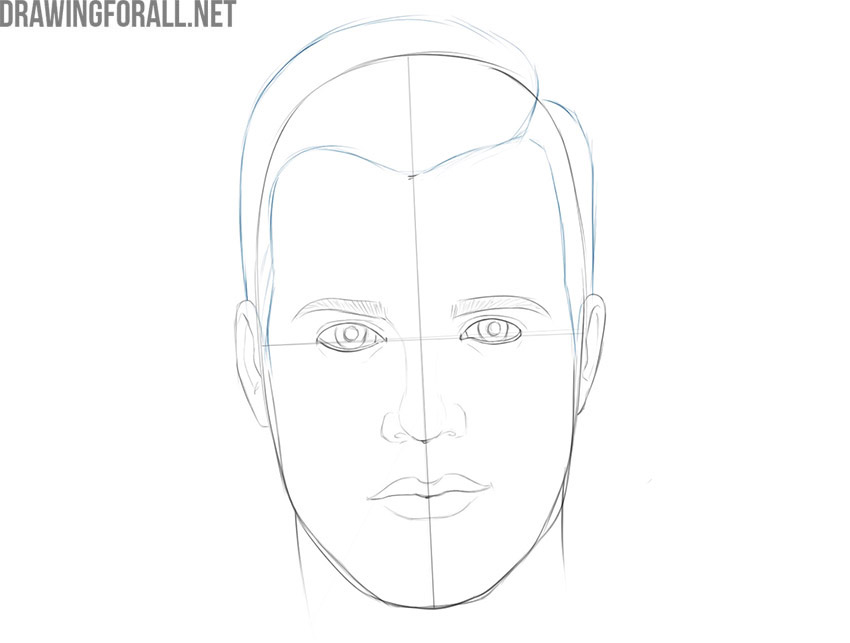 Now, let’s give the male face drawing a more complete look. To do this, first, carefully erase all the auxiliary construction lines we drawn earlier. Next, using a lot of long and smooth lines draw the texture of the hair on the head. To make the hair look more natural, draw them from roots to ends. 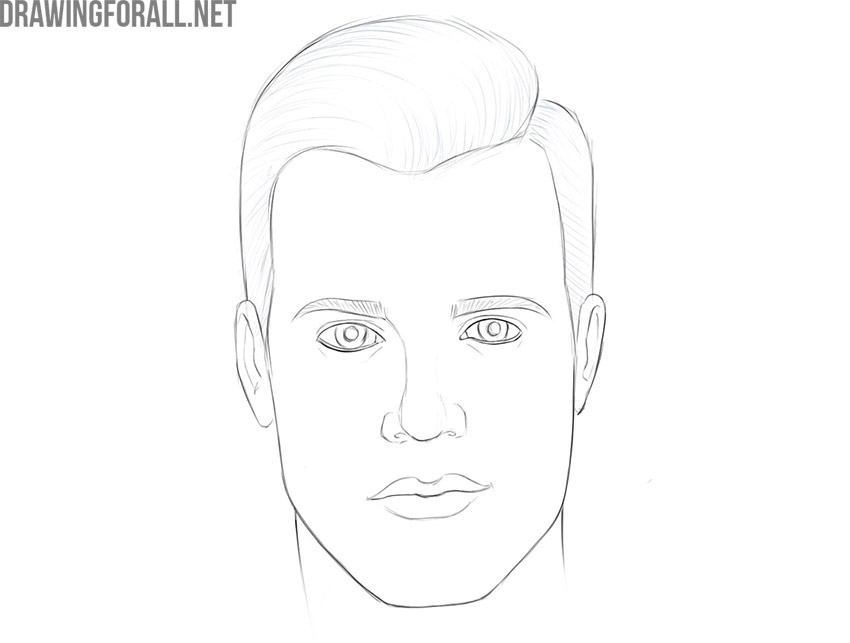 To make your drawing of a male face look truly voluminous, lively, and convincing, you should draw shadows. Start from the darkest areas, gradually moving towards lighter ones. Don’t forget to paint the pupils. We talked about what shadows are made of and how to draw them in our article on light and shadow.

As you can imagine, the process of learning to draw a male face does not end there. To draw a male face without any difficulty, we advise you to repeat all the steps several times, adding small changes. This will help consolidate the knowledge gained in this tutorial on drawing a male face.