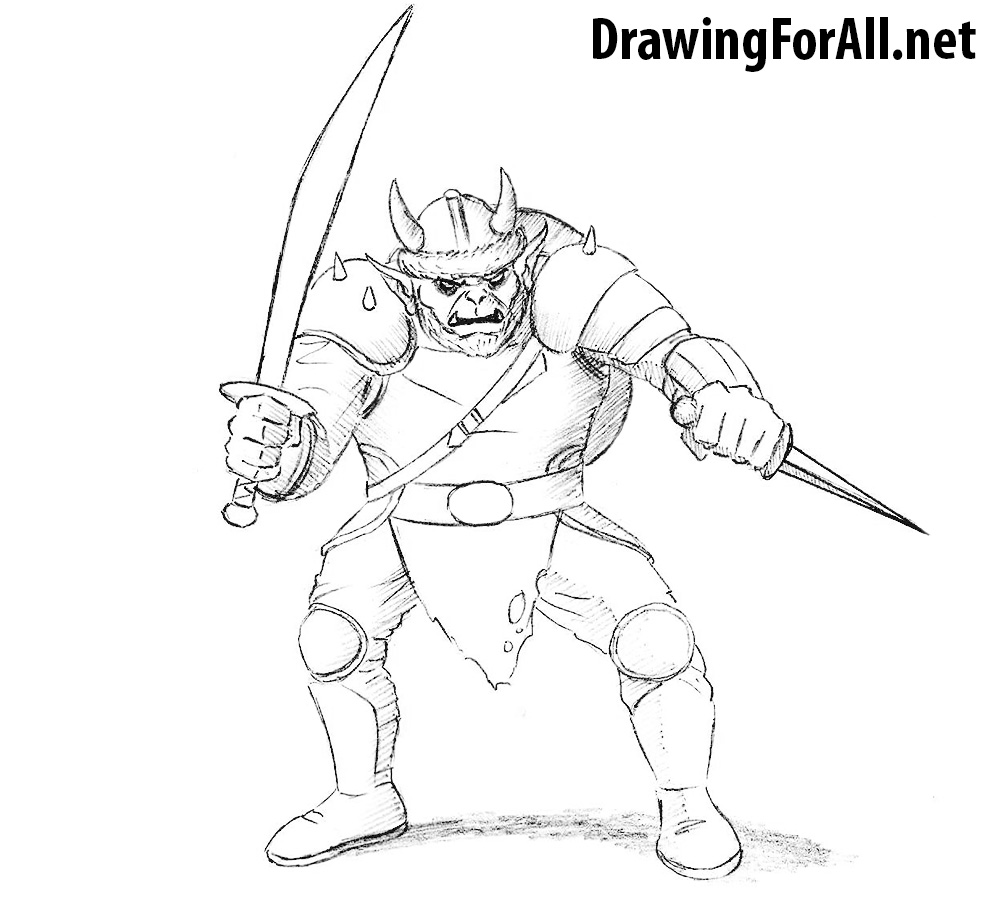 Hello, dear readers! Today we will show you how to draw hobgoblin from fantasy, i.e. from such worlds as Dungeons & Dragons, books of Tolkien or computer RPG games. By the way, we already have a lesson on how to draw Hobgoblin from Marvel Universe.

At first we draw the skeleton of future hobgoblin. Start with the head in a shape of a circle. Then move down and draw the spine suing simple line, chest and pelvis. And and at the end draw the arms and legs. Remind that all the lines should be very light. 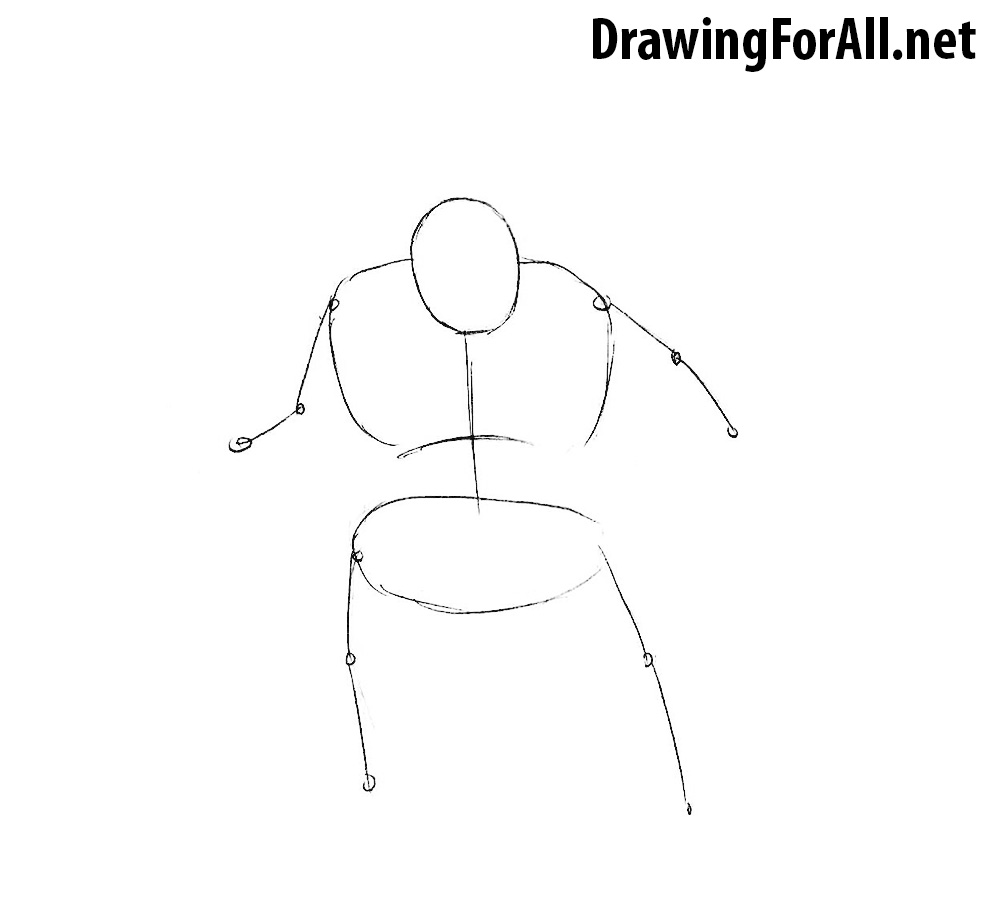 This step looks too cumbersome but don’t be afraid of it. Just draw the parts of the body using simple geometric forms. Also in this step we need to draw draw the lines of the facial symmetry and sketch out the scimitar 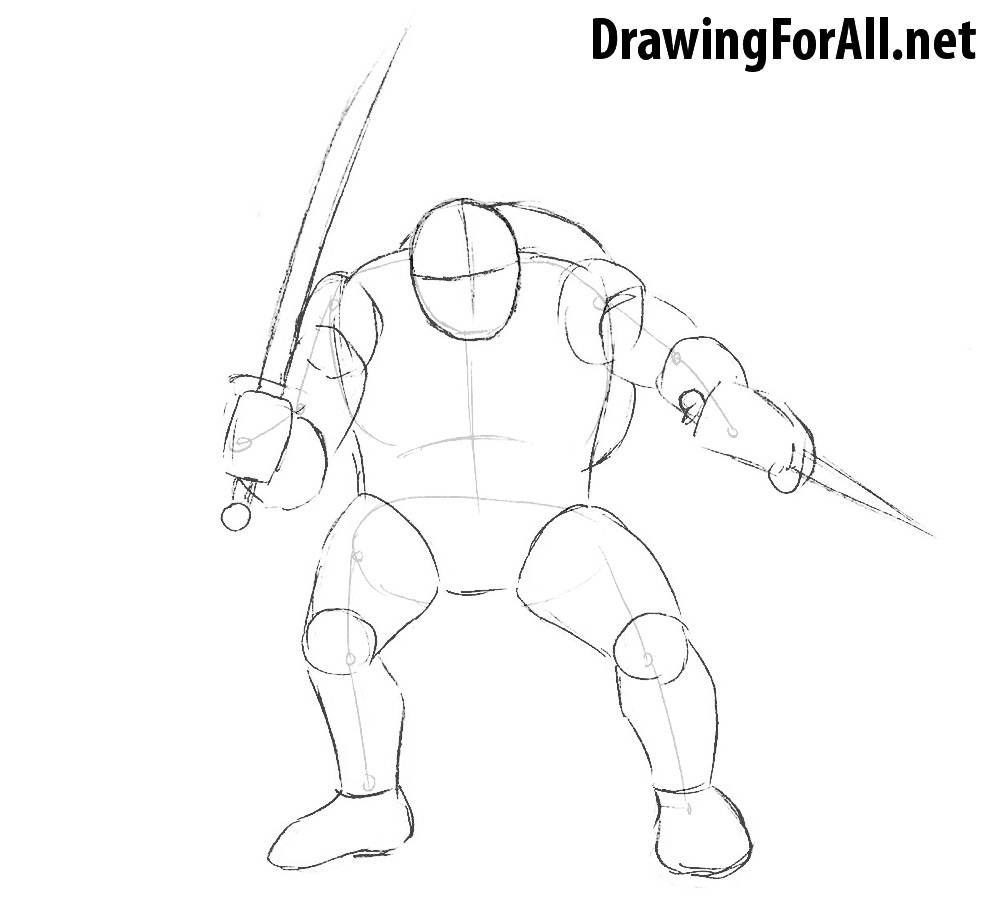 Let’s proceed to details, namely the face of our hobgoblin. At first we draw the eyes, that should be placed on the horizontal line from the previous step. Below draw the small nose and mouth with protruding fangs. Sketch out some wrinkles on the face and move to the step 4. 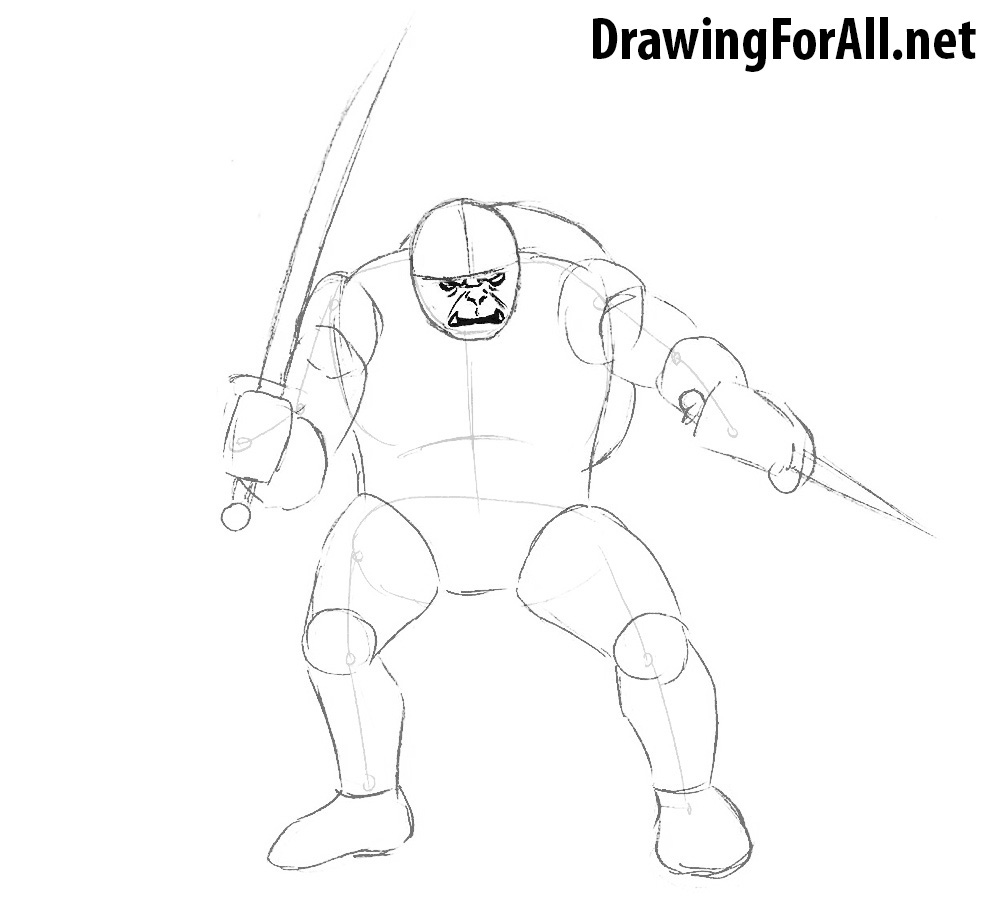 Here we are finishing the head of hobgoblin. Draw out the hat with fur and horns. Then draw big pointy ears. The ears are very similar to the ears of Goblin. And at the end of the step we draw the beard. 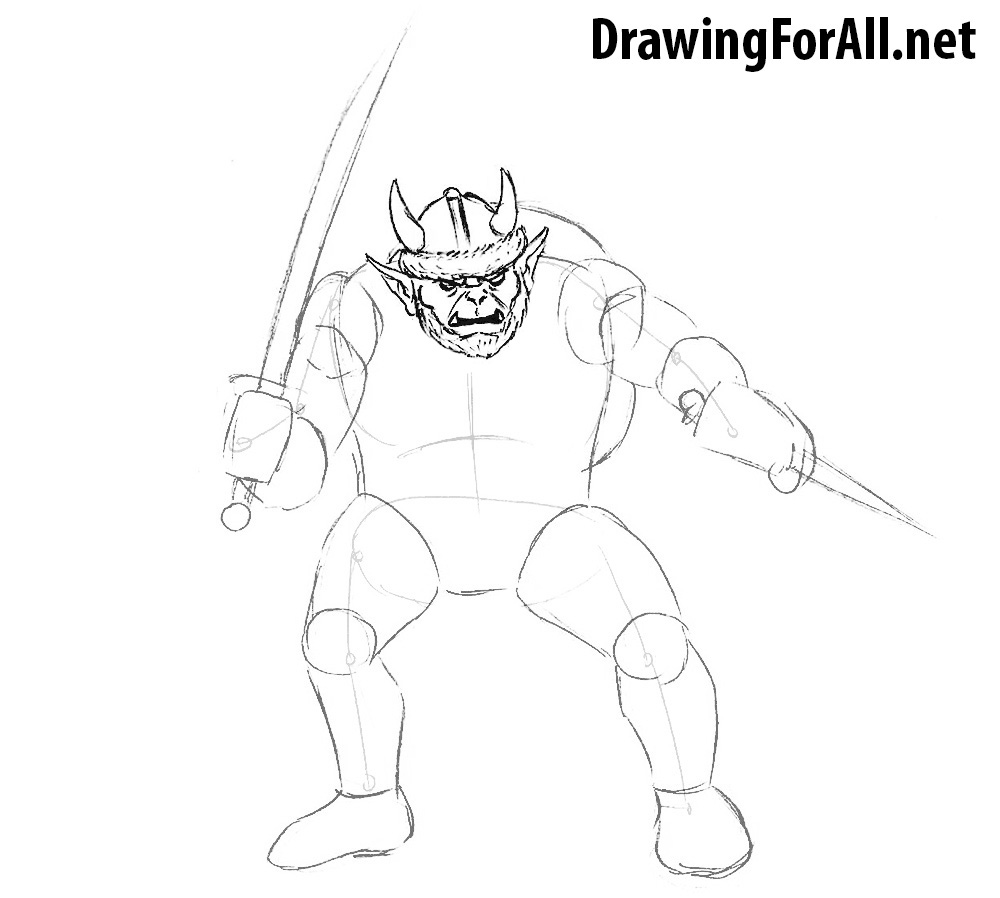 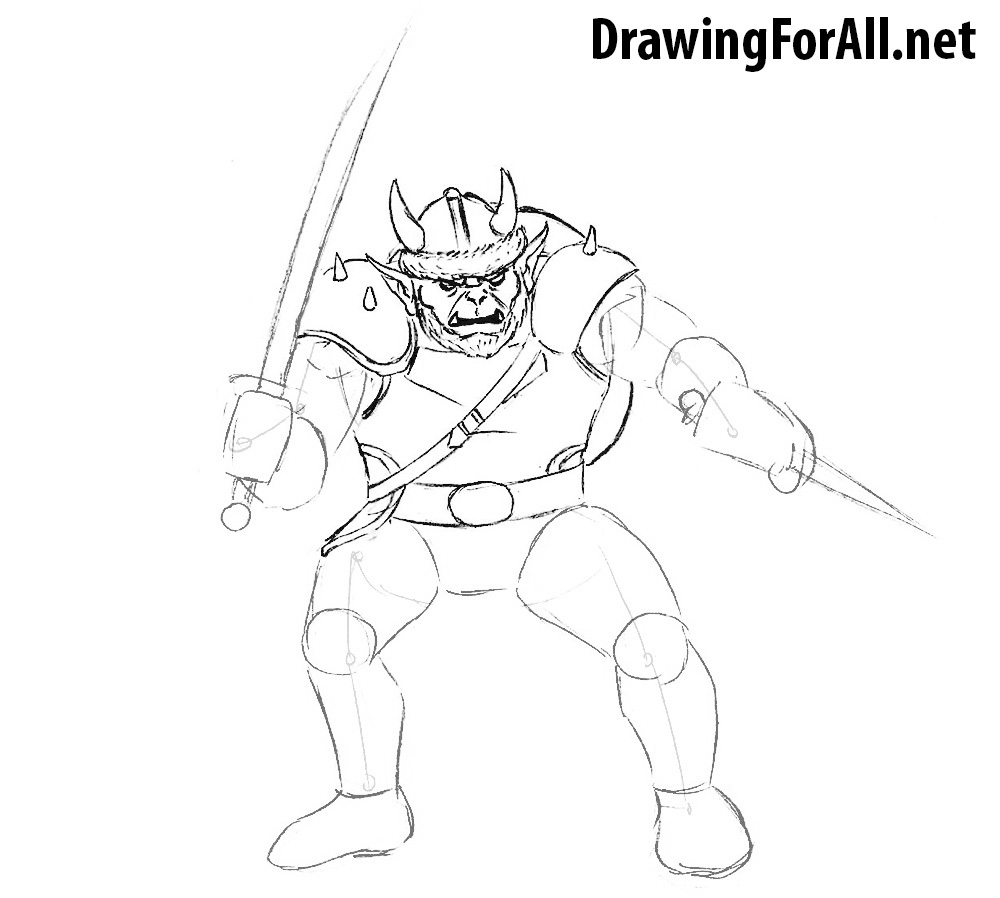 Let’s work with the arms. Continue drawing armor on the shoulders and forearms. Then draw the hand with weapons. Try to make the lines clean. And don’t forget to erase the guidelines. 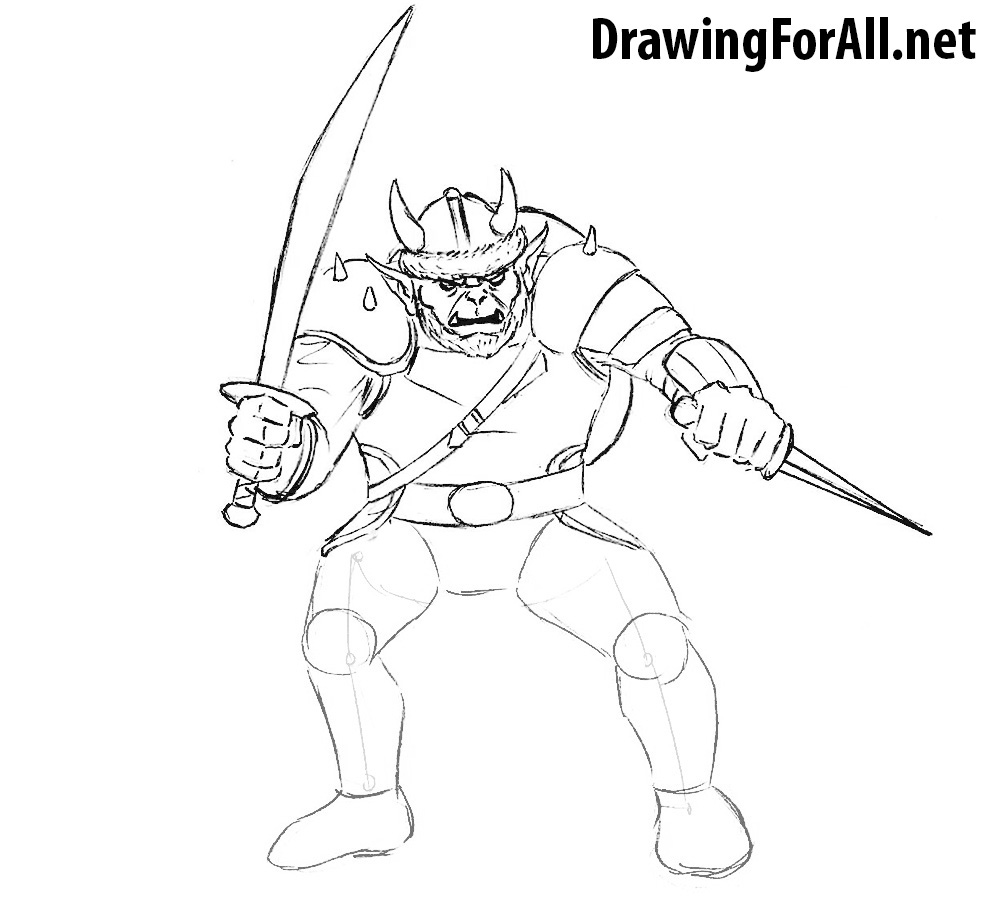 Continue drawing hobgoblin. Do the same actions but with the lower body. Draw the fabric hanging down from the belt. Then draw out the armors of the knees and shins. Add some folds to the pants and draw out the shoes. 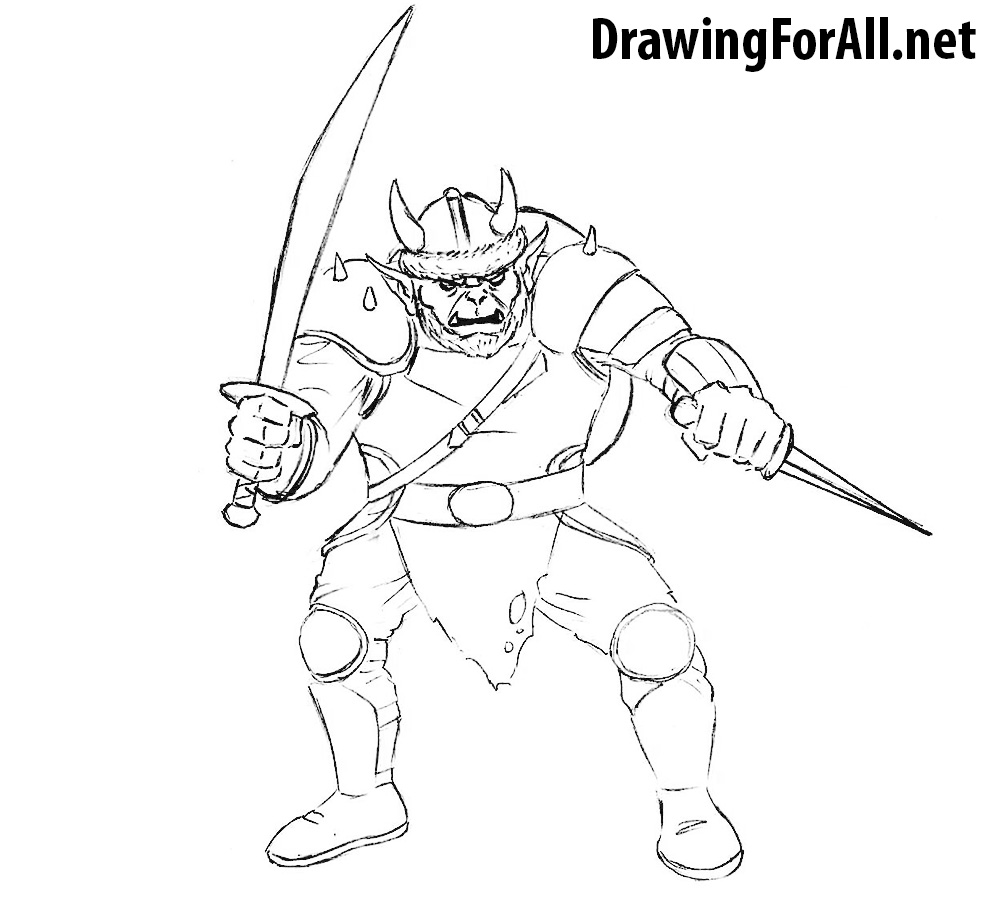 And the traditional final step where we add shadows. As we always say – first determine the source of the light and add shadows to the opposite sides of body parts. And as always the shadows here added using classic hatching.

Don’t forget to share the lesson on how to draw hobgoblin and subscribe to us in social networks. Also if you love fantasy visit the category about Myths and Legends.