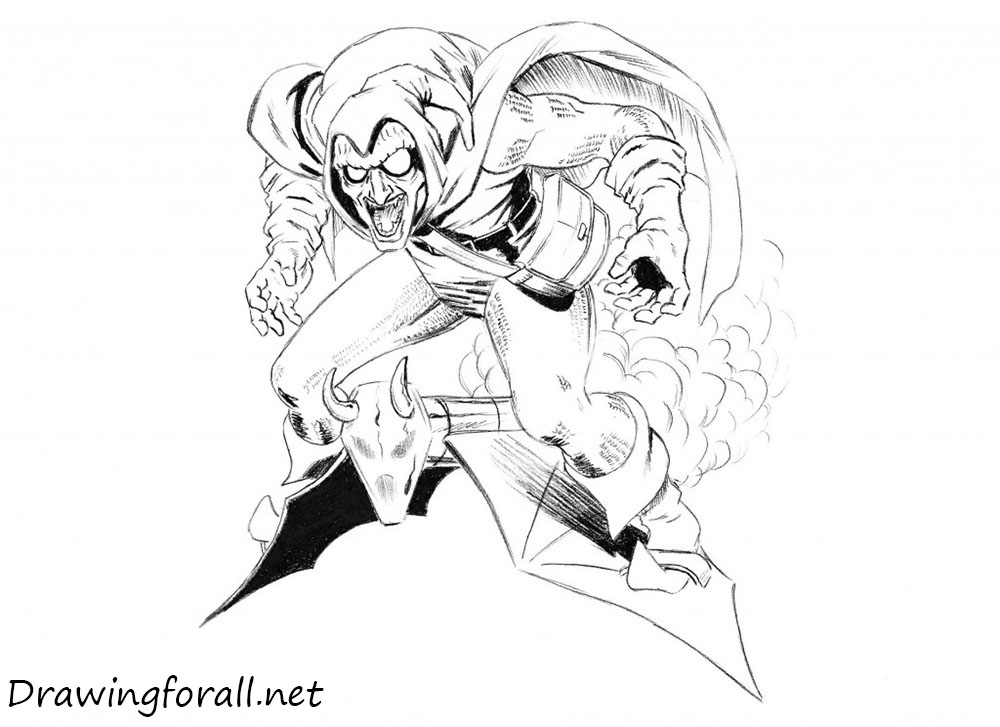 Hello! It’s time for a new article on the Marvel universe – we have prepared for you a lesson on to how to draw a Hobgoblin! Our today’s super villain is a very colorful and unusual character. Many remember him more from the cartoon about Spider-Man, which came out in the 90s – there he was drawn in very high quality and had all the necessary attributes such as pumpkin bombs, glider, scary mask and orange cape.

Incidentally, in this cartoon, he was actually very similar to the original Hobgoblin, drawn in 1983 by John Romita, Jr. on. But today we will draw the  usual, classic version. Let’s start the lesson and learn how to draw the Hobgoblin!

Let’s start with stickman – man made of sticks and circles, which shows us the basic proportions of the character, his position on the sheet of paper. Our hobgoblin must be very bent in the body, the legs should also be bent. I think our regular readers already know the basic rules of proportions – total body length is equal to the sum of the lengths of the seven heads, of which 3.5 – 4 are the length of the legs, depending on the constitution.

As in other drawing lessons, we start from the head and draw an oval. Then sketch out the lines of the body, using very light lines. 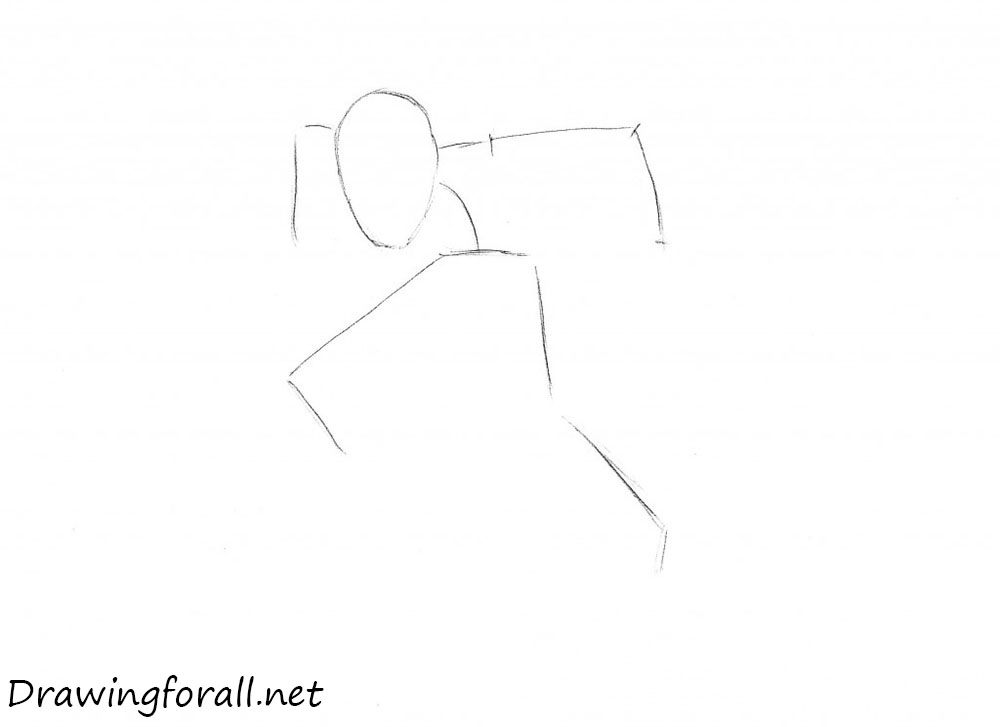 We mark the evil hobgoblin’s face and outline the contours of the cloak. First draw two perpendicular lines, of which one (the vertical) will denote vertical symmetry of the face, it should be slightly biased towards the head rotation. And another, horizontal line – the eye line. Below the eye line will be placed the nose and mouth lines.

Use smooth and light lines to draw the outlines of the cape. 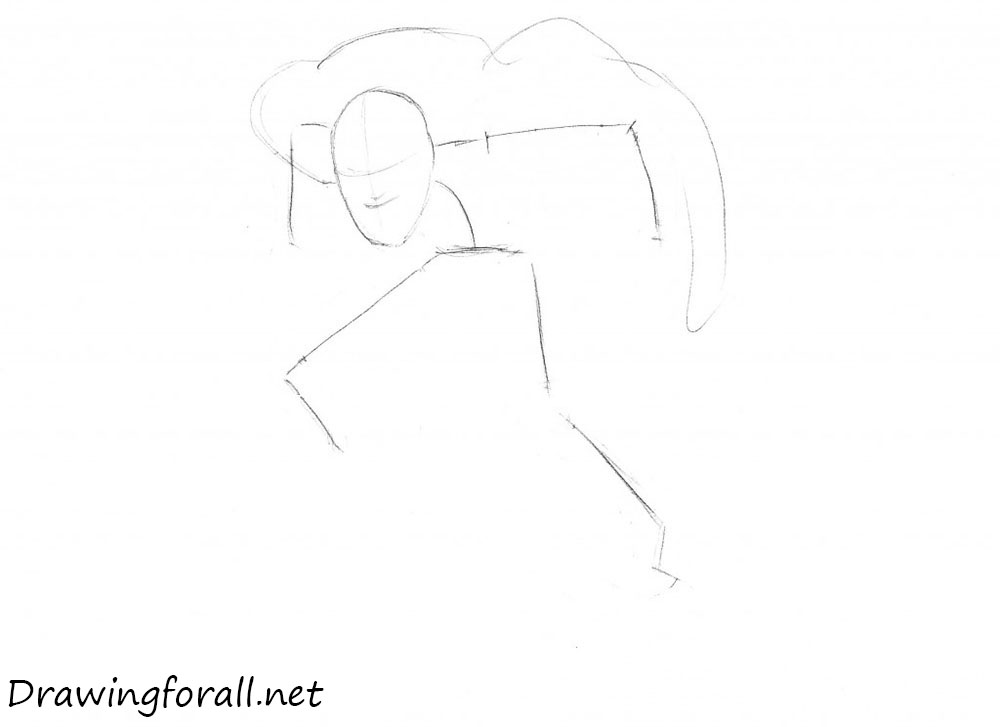 Let’s start adding “flesh” to the “bones” of Hobgoblin. So, here, we are continuing to do so – we draw the outlines of the visible parts of the body and add volume to the hands. 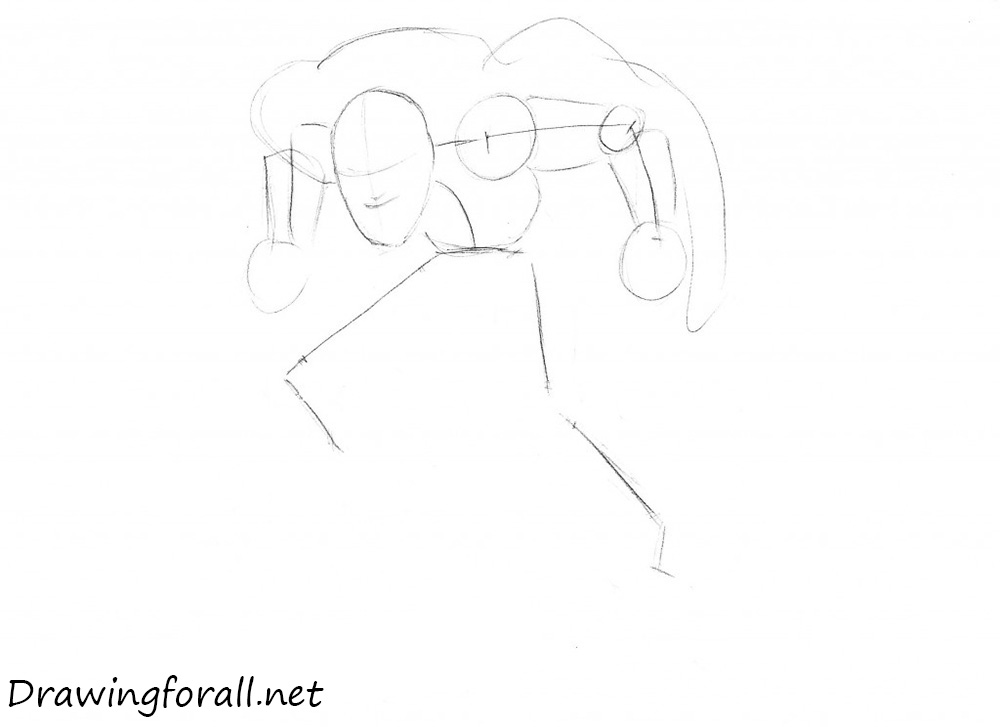 Yes, do not forget about the vehicle of Hobgoblin – glider. Sketch out the glider, using light lines. Incidentally, this vehicle he borrowed from Green Goblin, which we drawn in one of our other lessons. 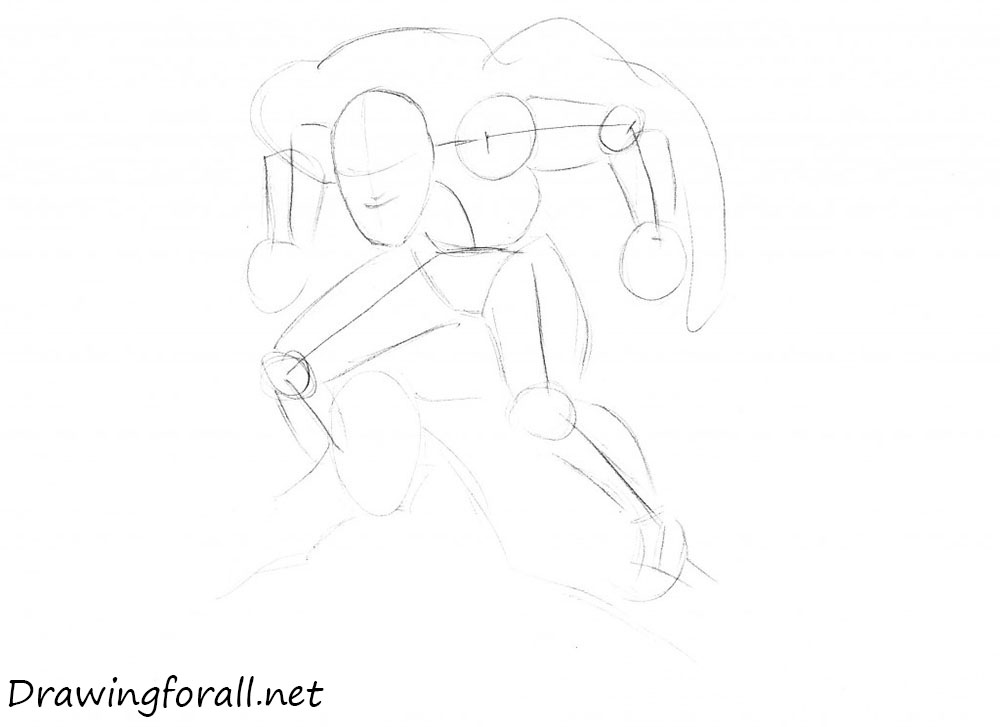 Silhouette is ready, let’s start adding final details. We will draw in the direction from the head to the feet, therefore, start with the face. Draw the contours of the face, that is similar to a scary mask.

Draw facial features – demonic semicircular eyes, a long, hooked nose and mouth curved into a grin. When you will draw the hood pay attention to a large number of folds on the sides and to the fold, which is located in front of the tip of the neck. 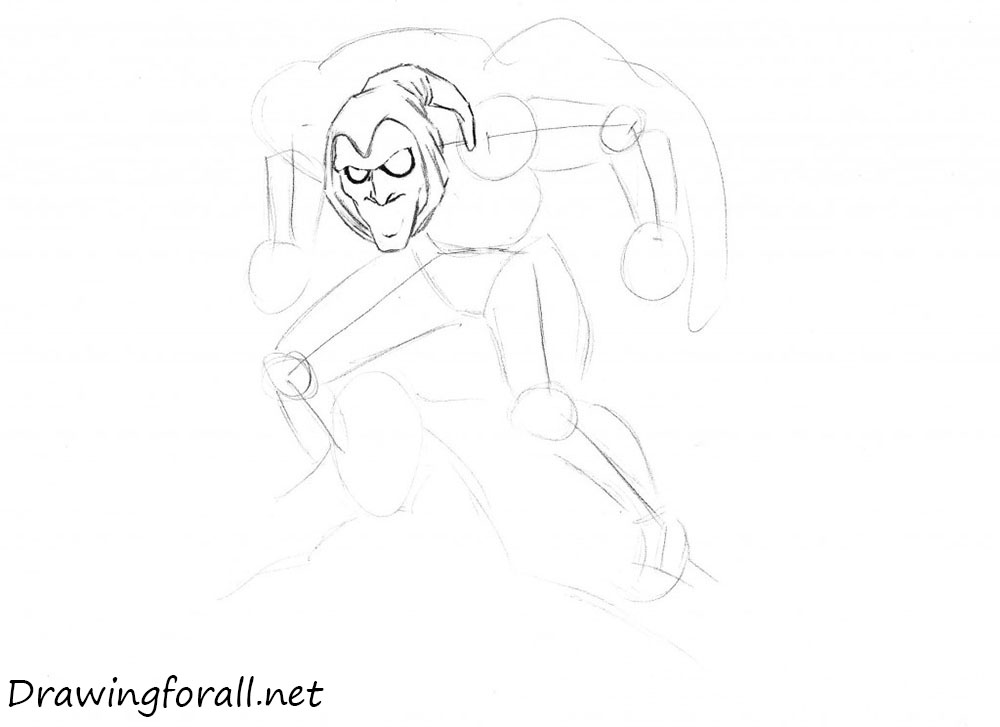 Now draw lines on the mask. First, draw a seam line, located in the area of the forehead. Draw the vertical lines on the entire length of the brows, and then proceed to wrinkles.
Draw a line of pointed terrible teeth. 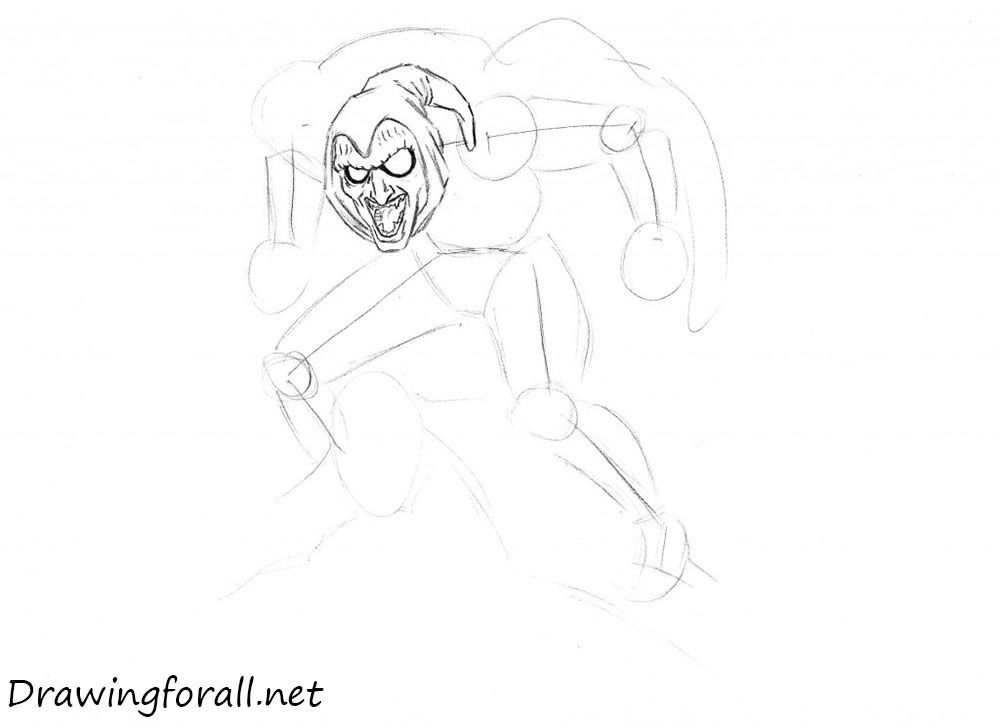 Next we turn to the right hand from us. Before you draw it, draw a part of the cloak, located in the neck on the right side from us. Then, using the guide lines, draw the outline of the hand and shoulder muscles, then go down below and draw forearm, dressed in high glove.

Incidentally, the muscles of the hands we discussed not long ago in a lesson about the werewolf. Now glove – note that it is significantly expanding toward the elbow, and this extension is covered with short horizontal pleats. 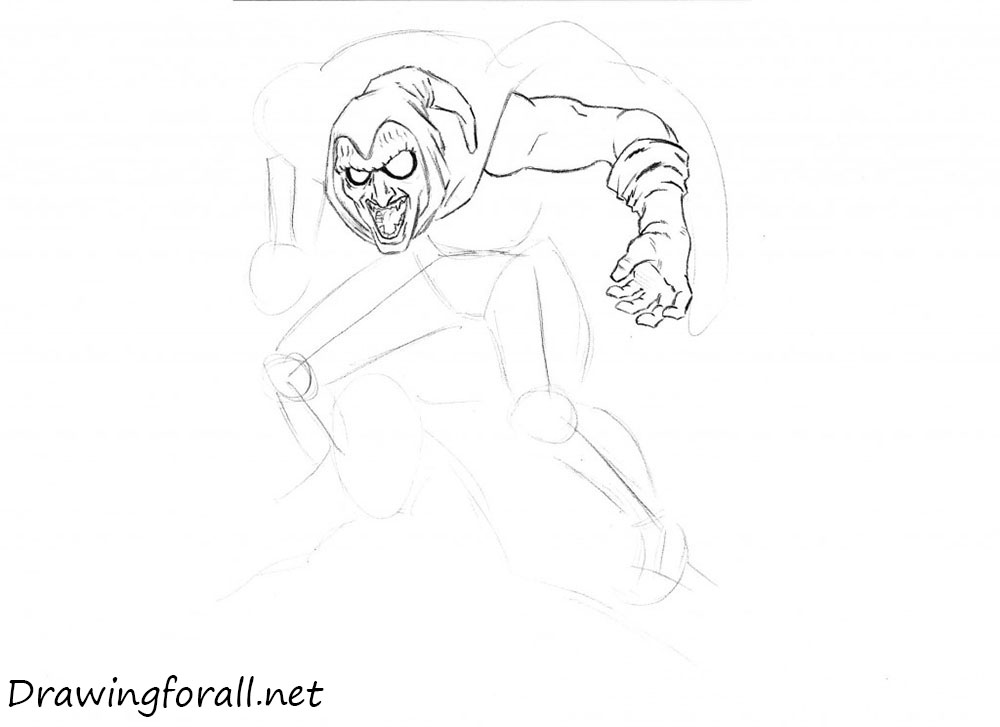 The left hand from us it will be easier, because we can only see the hand and forearm – the rest is hidden by the cloak. It is necessary to properly convey the folds on the glove, because they create the desired effect. Do not forget the folds on the bottom of the gloves in the wrist area. 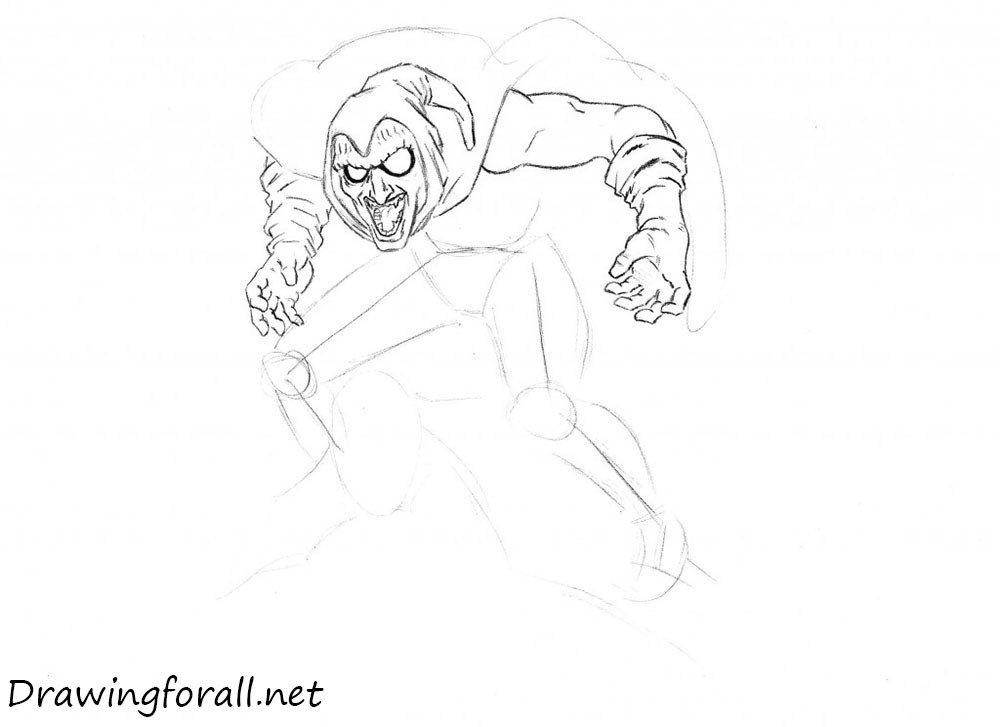 Draw the cape, or rather, that part of the cape, which is located behind the back. Circle the contours of the cape and add the folds of fabric – the most intense folds located in the area of the shoulders. To draw the folds use smooth, confident lines. 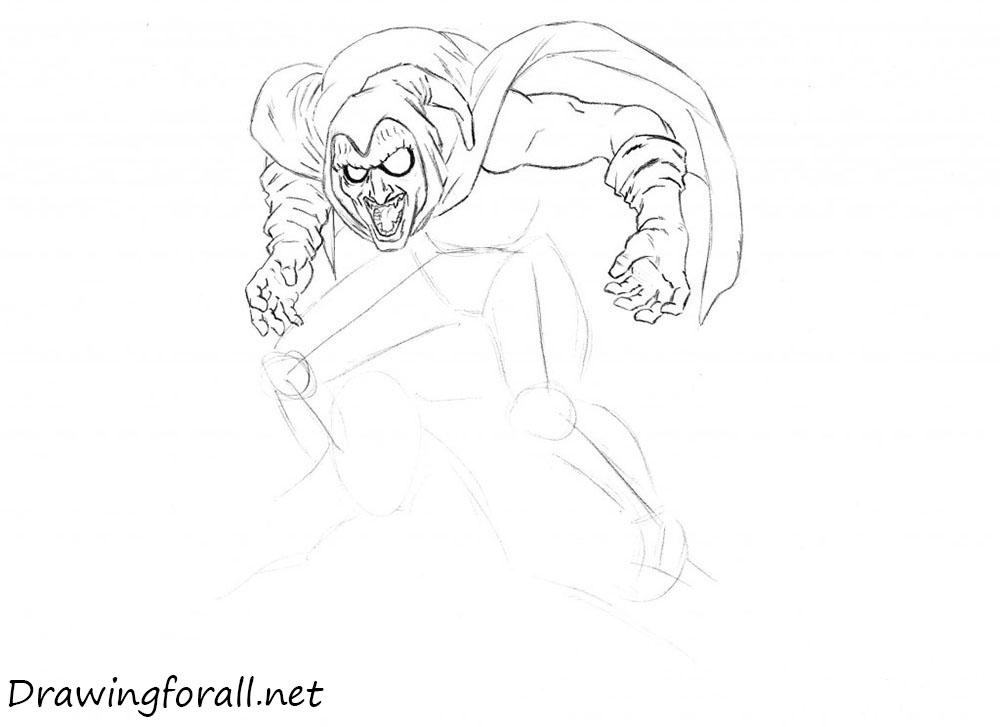 At this stage, we draw the torso and the bag. Circle the lines of the torso and add some folds. Draw the strap that mounted on several straps. Do not forget to outline the central belt buckle, the bulk of which is hidden. 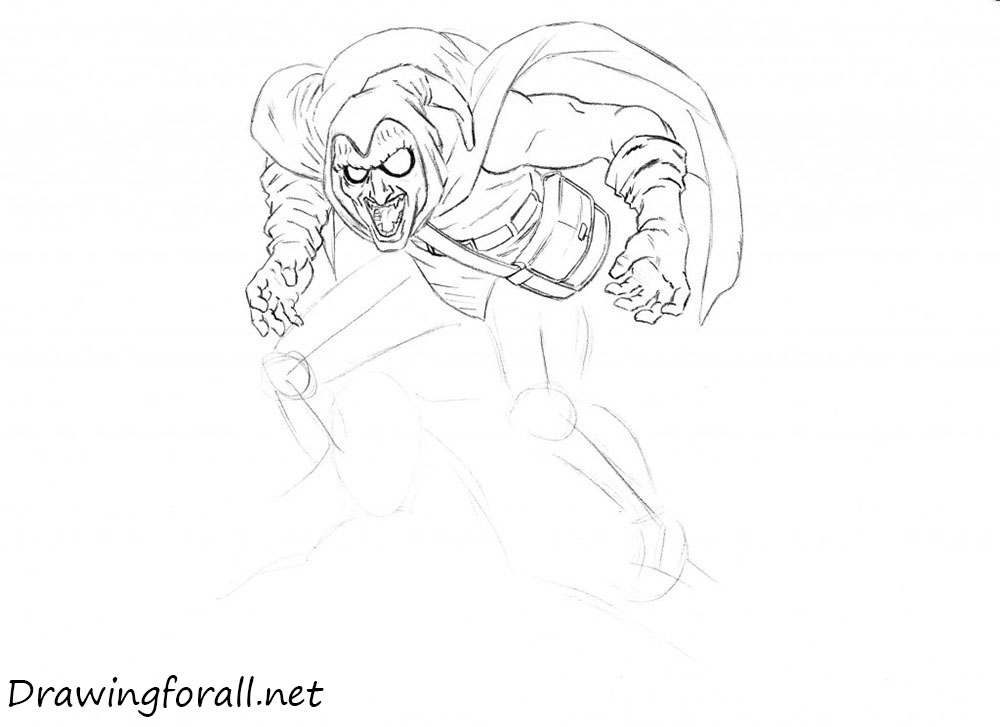 Draw the legs of Hobgoblin. This step will be very simple. Circle the lines of the legs. By the way, do not forget to mark the boot flap, located on the calf muscle. Another detail – wrinkles. Their little, but they are present in the ankle area and look like short horizontal strokes. 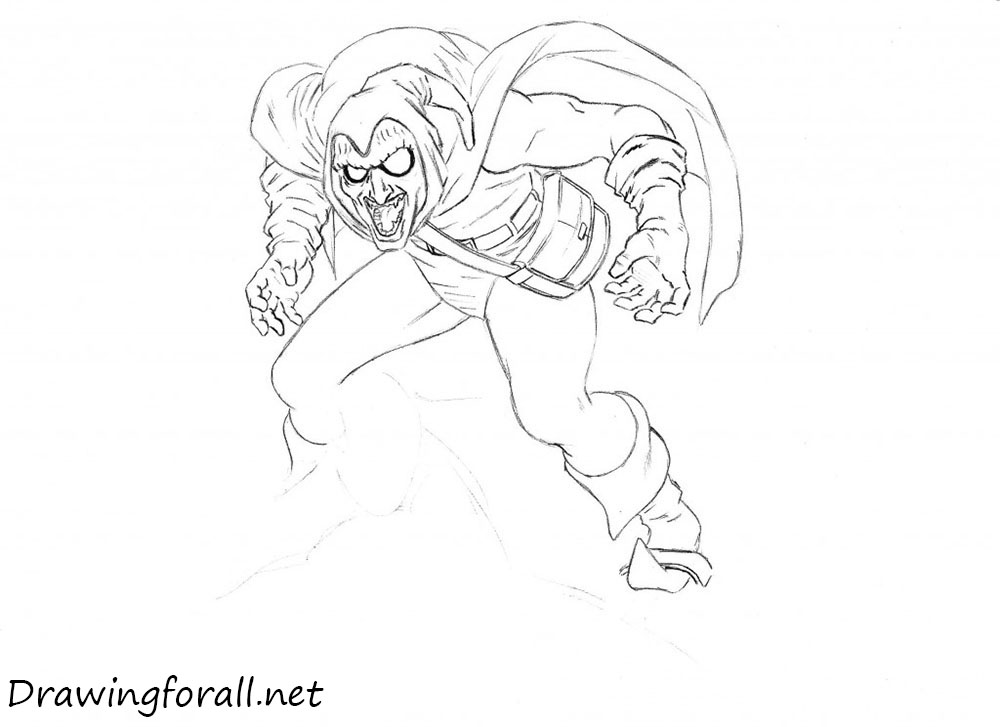 In the final stage we draw the legendary glider of Hobgoblin. The wings of this device have shapes similar to dragon’s wings. On the outer side of the wings there are smooth lines in the form of veins, which further strengthens the similarity. An important detail – the horns, mounted on the front of the glider. At the very front of the draw three spots, which should be similar to the ghostly face.

Also in this stage, we put the shadows. We will do it in comic style – that is, the shadows will appear as rough, contrasting black spots and lines

It was a drawing lesson created by team of Drawingforall.net. Write your wishes for the new lessons right in the comments to this article, goodbye!