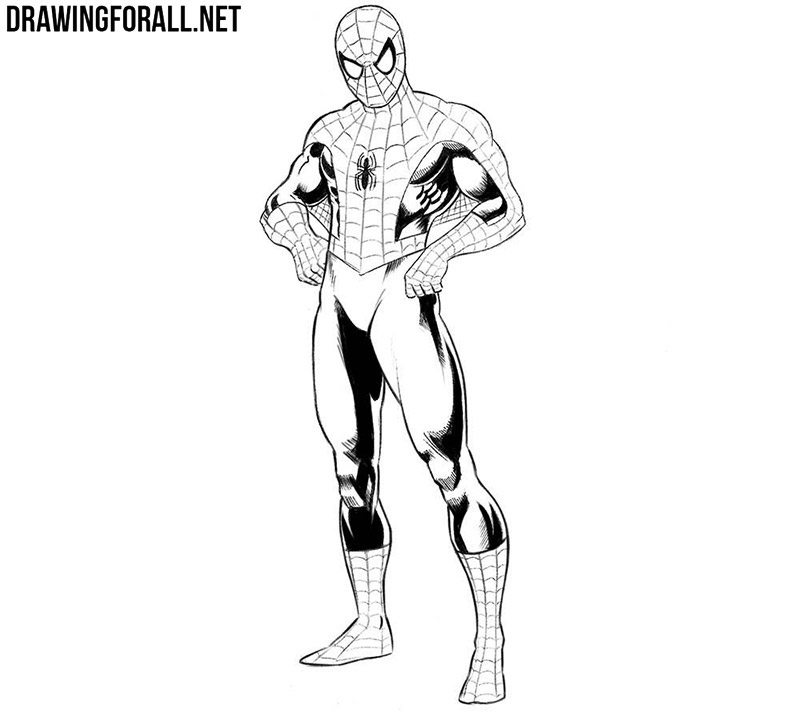 We are pleased to present you for an article about one of the greatest heroes ever. We are talking about Spider-Man. Spider-Man has become the very first and most important landmark in the world of comics for many generations of people. In fact, this is not just about comics. The story of a man with his troubles and weaknesses has become a real sensation in the world of billionaire superheroes and indestructible gods.

All members of the drawingforall team grew up on comic books about Peter Parker. We received basic ideas about good and evil, about honor and disgrace, about morality precisely from these stories.

That is why we are pleased to present you for a lesson on how to draw Spider-Man step by step. Now he has a web under his arms. It is really a classic version.

First we draw the stickman contours. You can see the figure of an adult athletic man. The chest should be significantly wider than the pelvis. Height should be equal to the sum of the lengths of the seven heads. You can read about the features of drawing a male figure in this post. 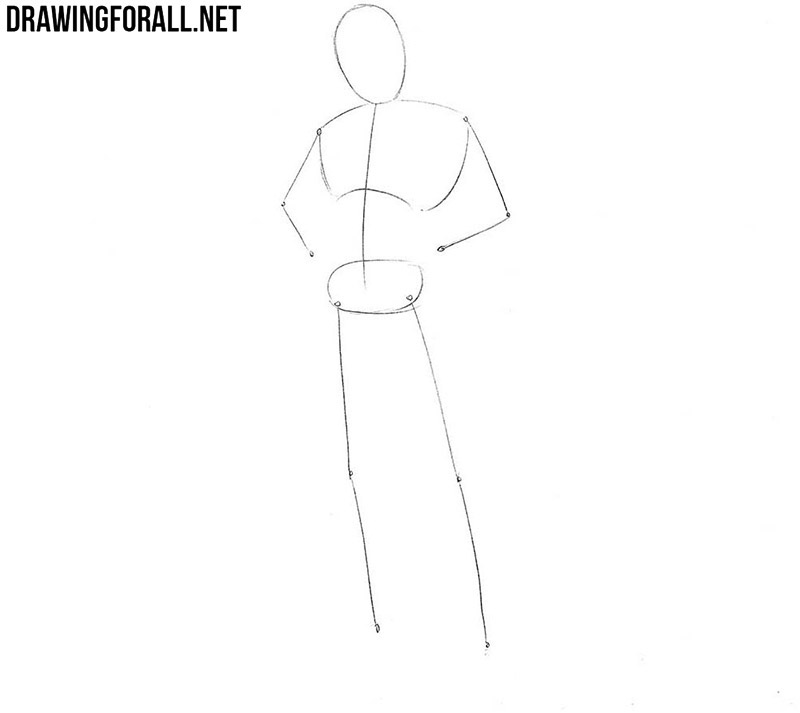 Let’s draw the silhouette of our superhero. First, draw two intersecting lines on the head. These curved lines will help us draw Spider-Man’s mask

. After that, draw the contours of the torso. You can see the broad shoulders and broad chest, which smoothly move into the narrow waist.

Draw the neck. This is a short cylinder that connects the head and torso. In our case, this cylinder is slightly overlapped by the contour of the head. 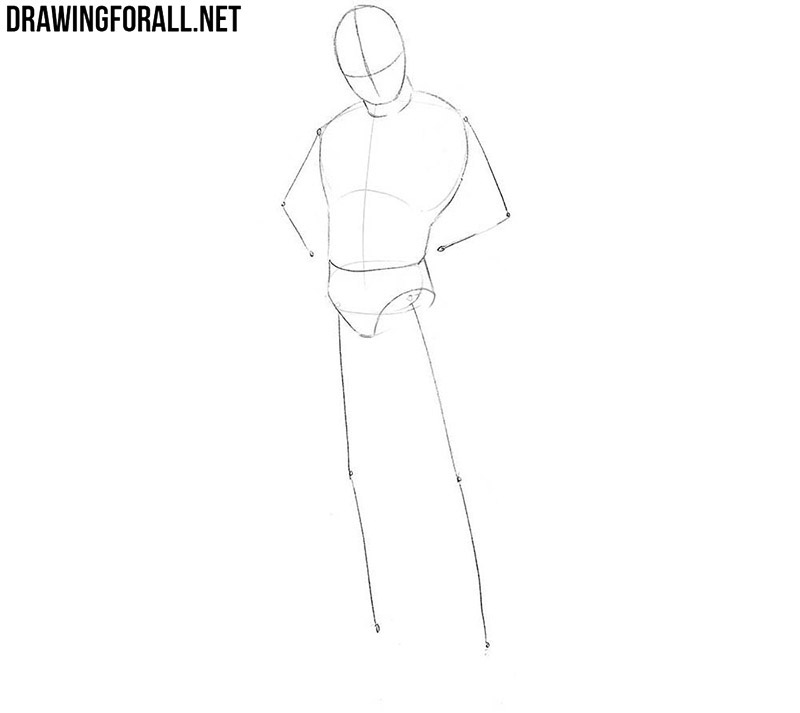 One of the comic book characters once said that Spider-Man does not look like huge, muscular superheroes. According to him, Spider-Man looks like a master of oriental martial arts.

Therefore, in this step we draw relief but not huge arms and legs. Avoid sharp bends and too wide contours. Note that the arms of the elbows are bent at a right angle. 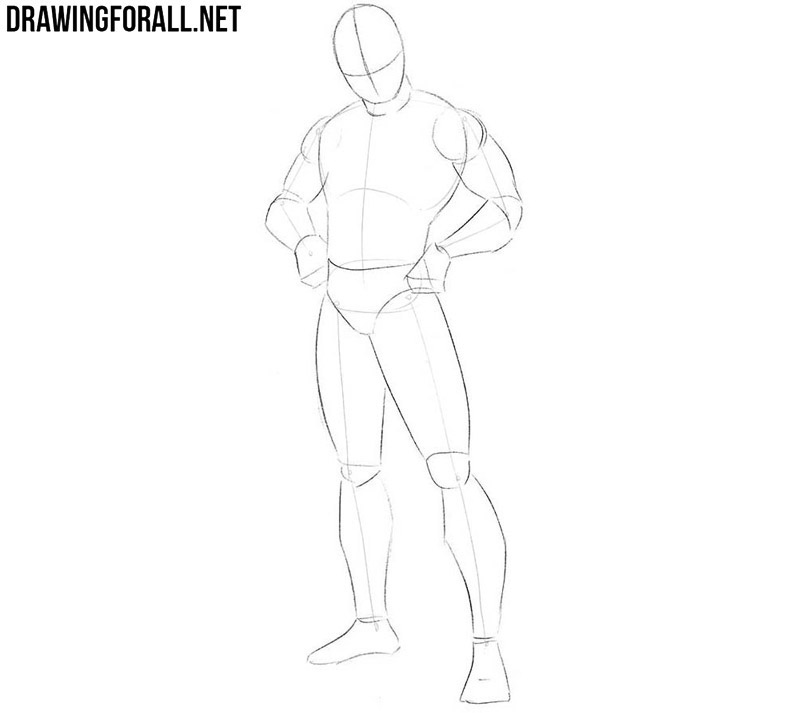 So, we did a great job with the silhouette. Now we will draw Spider-man’s costume.

First we draw the contours of the eyes on the mask. Each eye consists of two lines. The top line is straight. The bottom line is very rounded.

As you remember, the Spider-Man costume consists of red and blue colors. Now we draw the outlines of the elements in red. These are lines that narrow from chest to belly. These lines form a belt near the abdomen. You can also see the borders of red and blue on the arms and legs of our superhero. 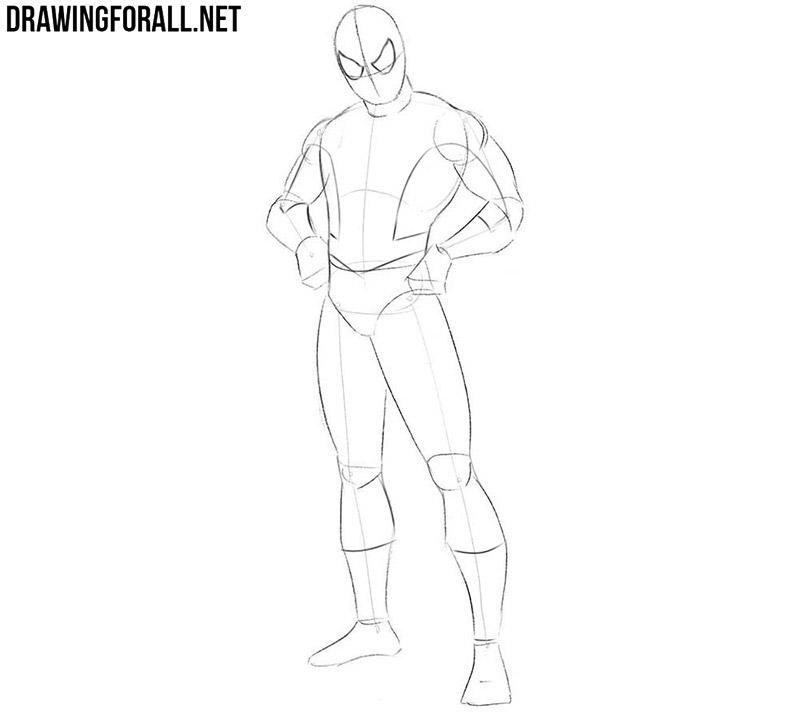 So we continue the drawing tutorial on how to draw Spider-Man easy. We erase the extra lines from Spider-man’s mask. We also trace the final contours of the eyes. The upper parts of the eyes should be done darker and more contrast. 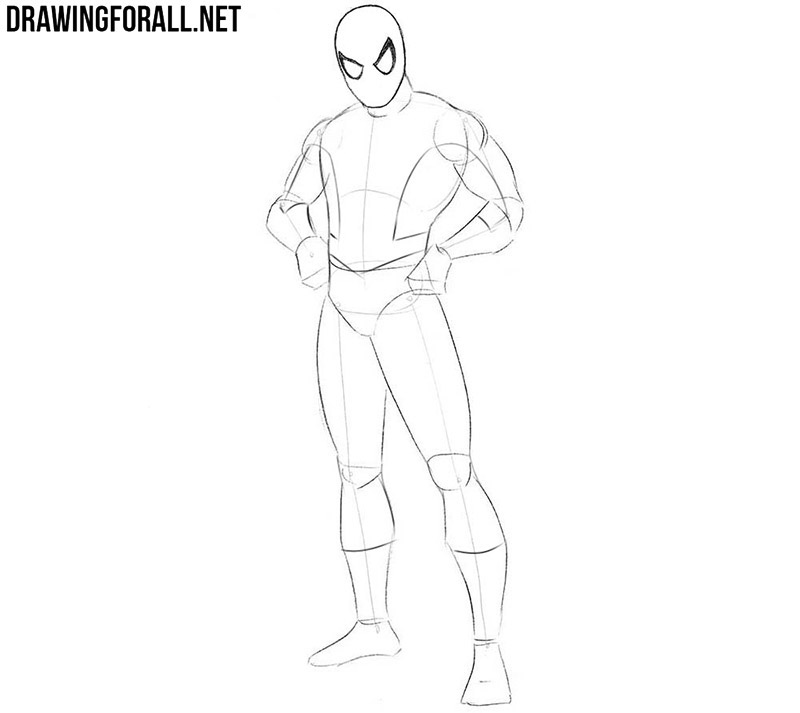 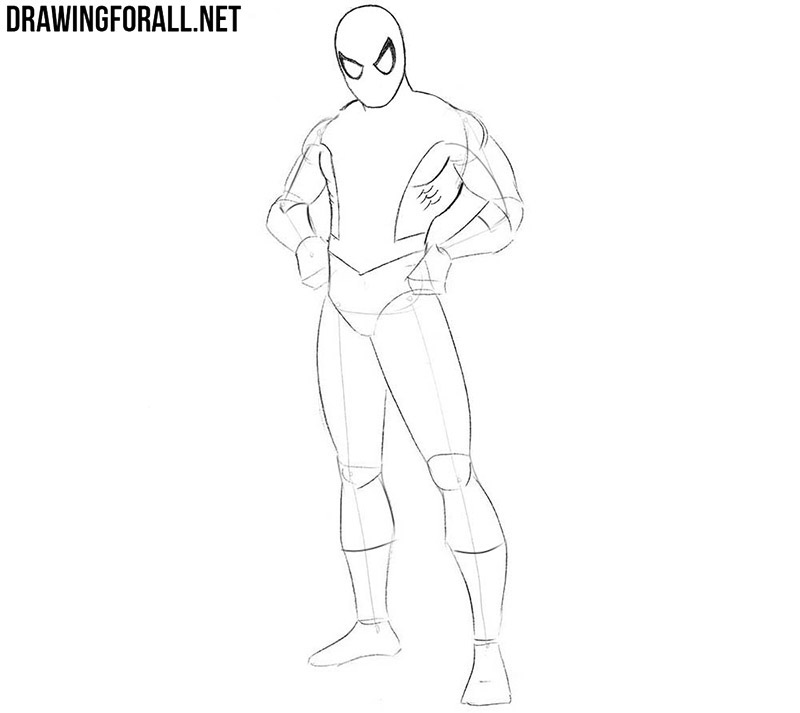 In this step we will work with the arms of Spider-Man. Draw the final contours of the shoulder, forearm, and hand. Pay attention to the costume line. These lines look differently on the left hand and the right hand. Read this drawing lesson to make it easier for you to draw fingers. 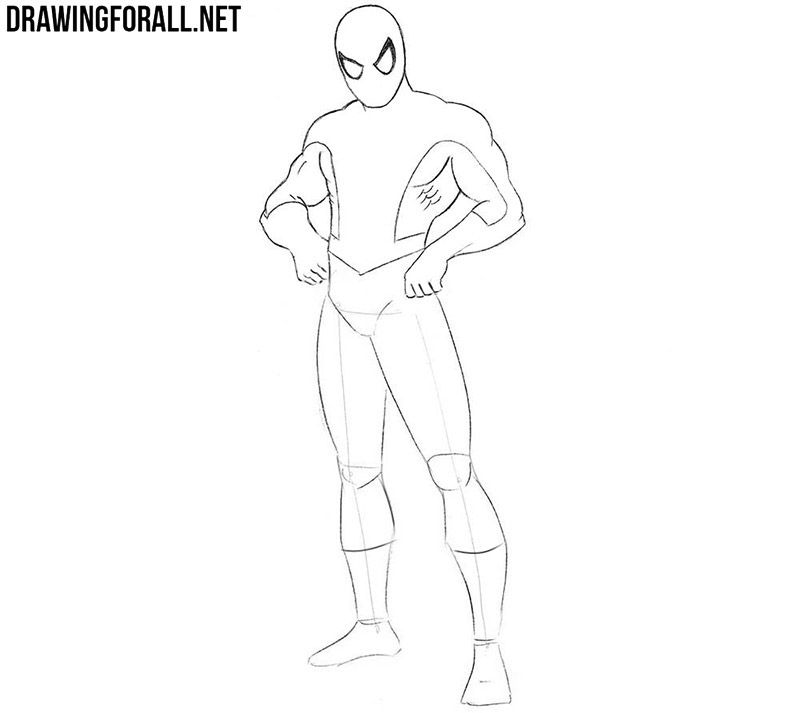 In this step we will draw the final contours of the legs of Spider-Man. Denote the contours of the knee joints and thigh muscles. At the end of the step, we erase all the extra guide lines. 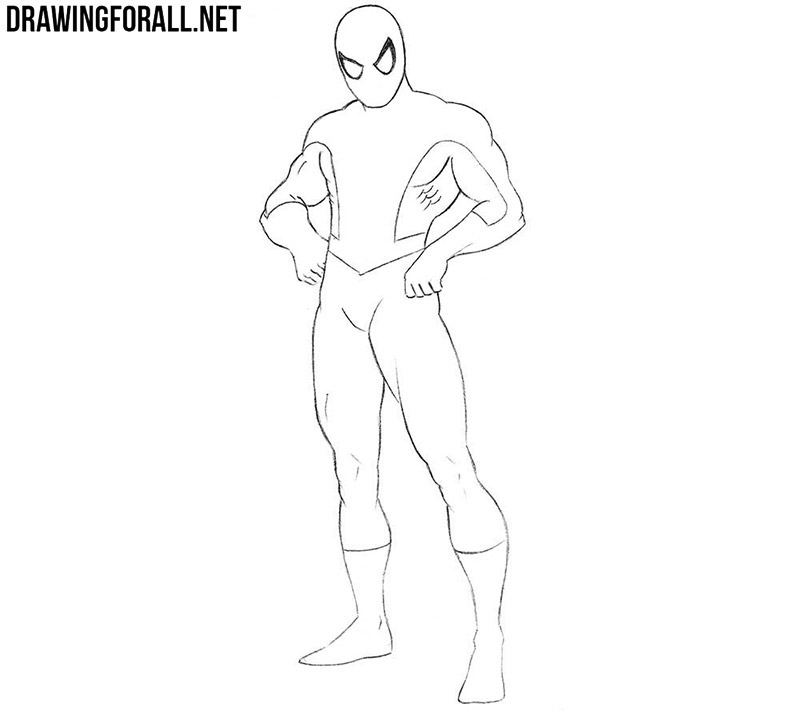 Now is the time to work with the web on the suit of our character.

By the way, did you notice the main difference of this lesson from other drawing tutorials about Spider-Man on our site? We are talking about the web that is located under the arms. 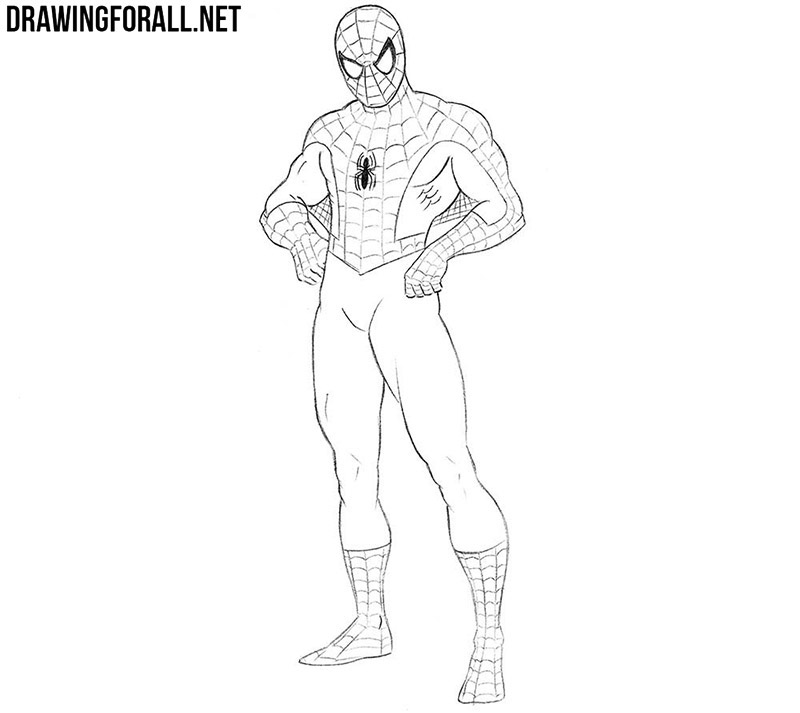 You can see many ways to draw Spider-Man. However, the classic way is to use the comic drawing style. According to this style, the shadows should look like black contrasting spots.

It was a rather difficult lesson. We took into account the experience of previous lessons about superheroes and tried to correct our mistakes and shortcomings. If you do not like our new way to do drawing lessons, write about it in the comments. We will try to make the content even better for you.