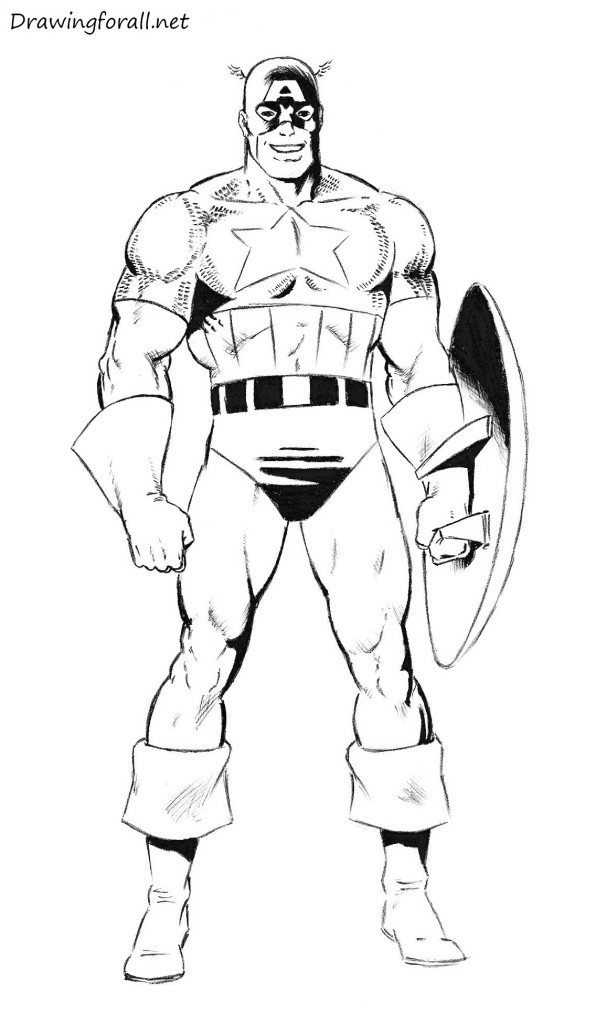 Hello! We have a new drawing lesson devoted to drawing comic book style drawing. As you can see, today we will draw one of the greatest heroes from Marvel Universe. Today we will draw Captain America.

You can use this rules for practically any superhero. For example, Thor have practically the same proportions. 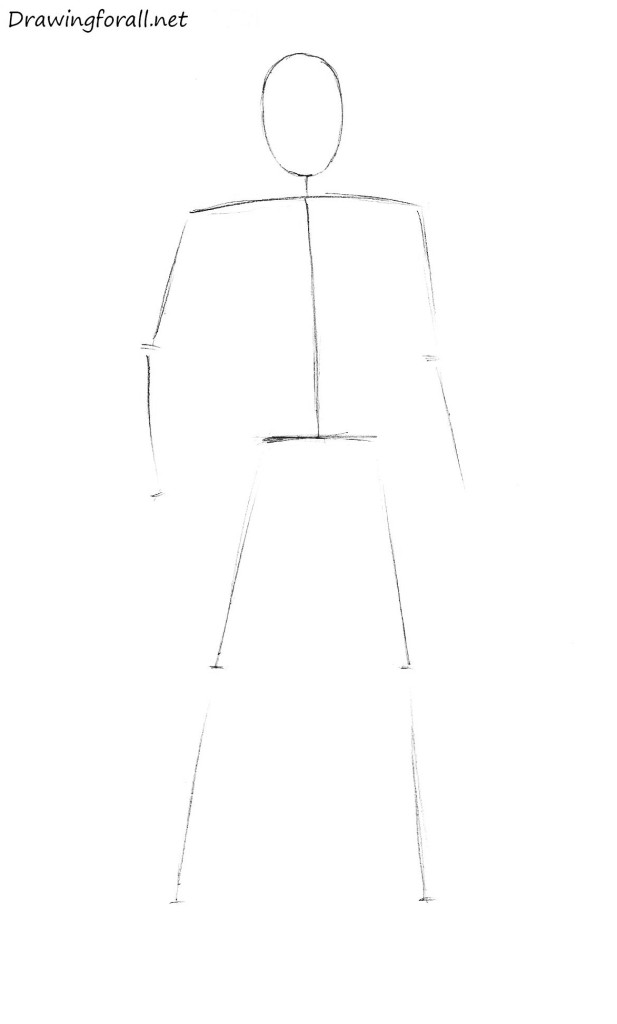 Ok, let’s add some flesh for our stickman. The main parts of the body look like simple geometric shapes. For example the neck is the short cylinder (we can see only part of it). The torso should be quite narrow from top to bottom. The pelvis area looks like a triangle.

We decided to make this scheme for comfortable drawing the contours of the hands. You can see shoulder muscules:

It was the main muscules form the contour of the shoulder. Number four denotes forearm. Please note the forearm should be narrow to the palm (number five). 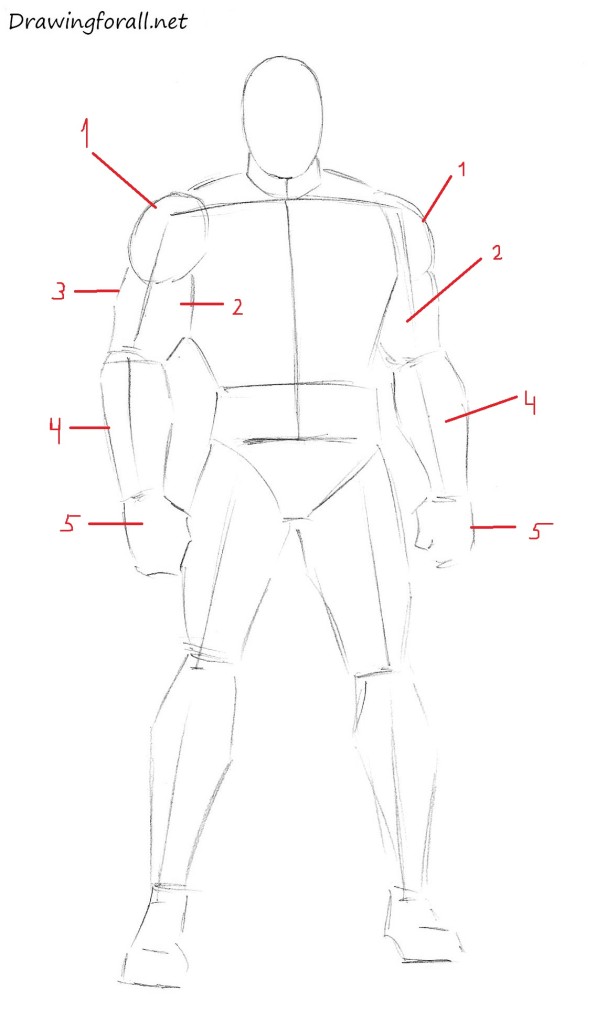 Now a few words about the legs. As you can see, the leg is divided into:

Every part has the unique form. The hip is very wide near the body, but this part of the leg has a smooth narrowing to the knee. The shin has a very typical bending, forming by the calf (another name is gastrocnemius) muscle. By the way, exactly muscles like gastrocnemius or forearm’s group muscles or core muscle are forms full athletic figure. 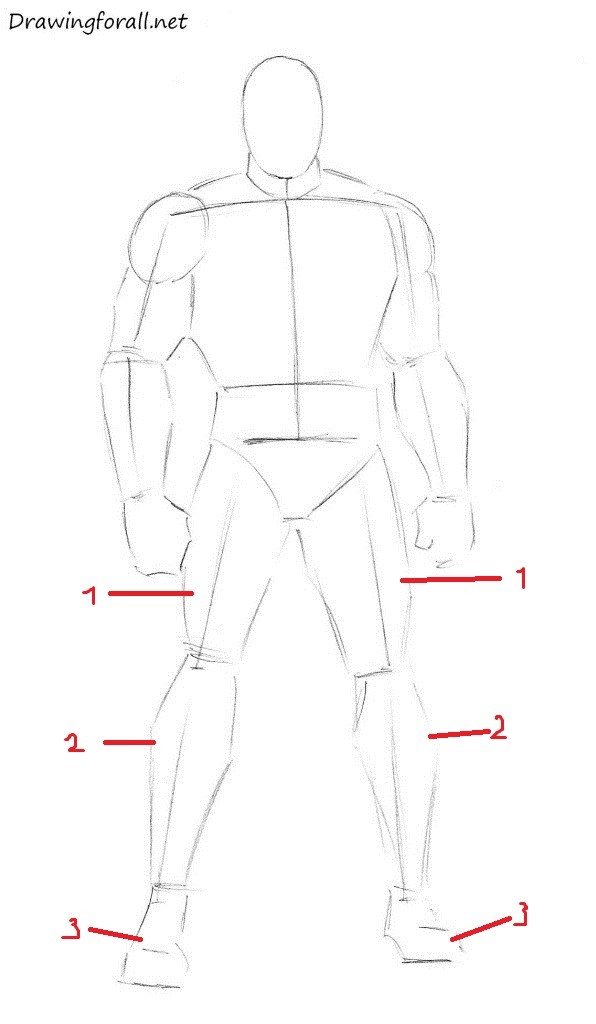 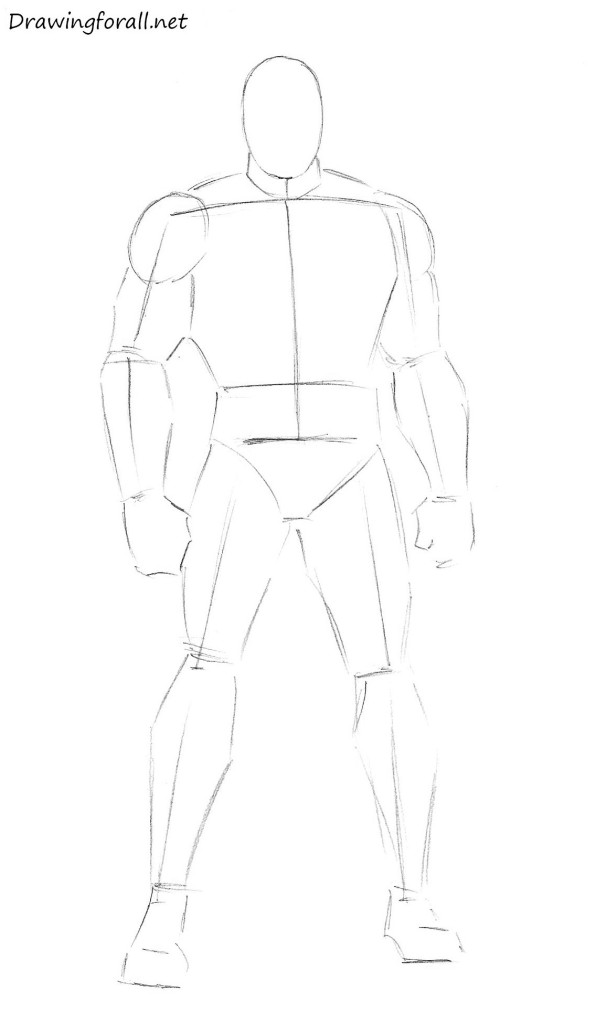 Ok, let’s continue tutorial in which we asked how to draw Captain America, the lider of the Avengers team. Now we have the contours of the figuire. Let’s make a little marking of the face. First, you should draw the vertical line of the facial symmetry. We have a full-face view so this line locates in the exact center of the face.

Then draw a horizontal line indicated the location of the eyes. This line is the highest of the horizontal lines. The line of his nose and mouth, are located underneath. 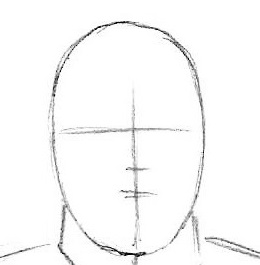 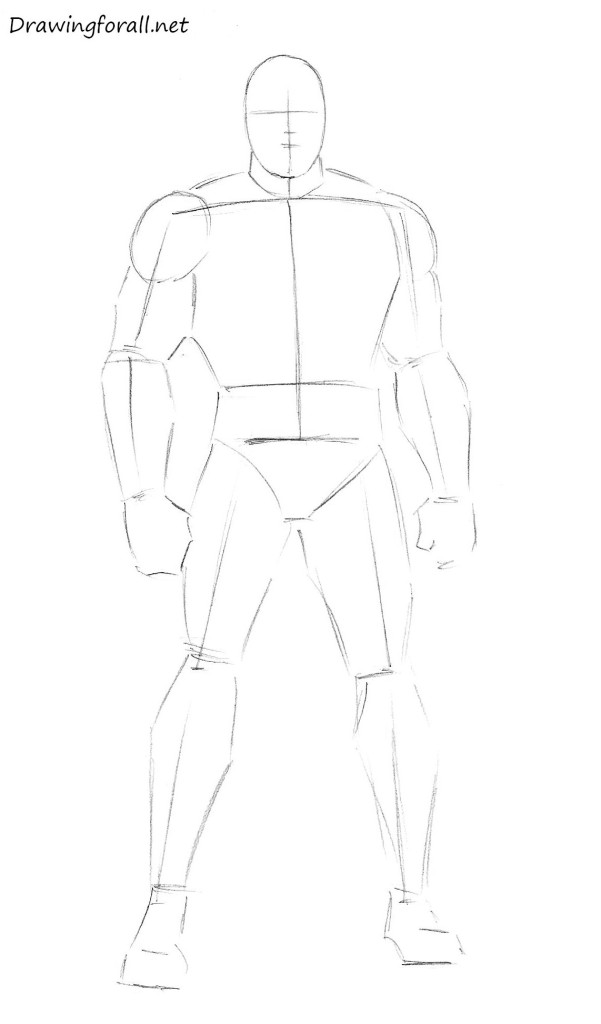 In step we continue to draw the face. Use lines from the previous step as a guide. Draw the mask. In the area of the nose and lower part of the face the border of the mask is a straight lines and the angles. Don’t forget about the little wings and foramens for the eyes. 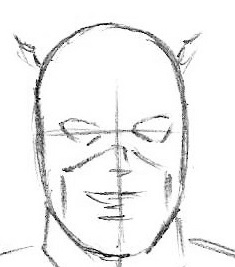 The general plan is: 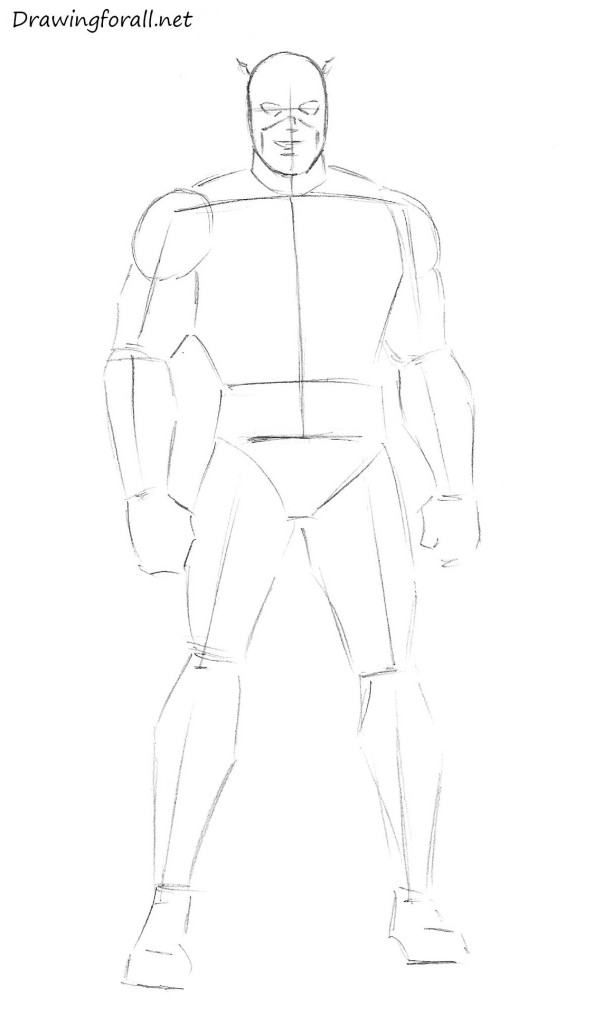 In this step we should draw the face in details. Darken the lines from the previous step. Draw the ears and detail the eyes. 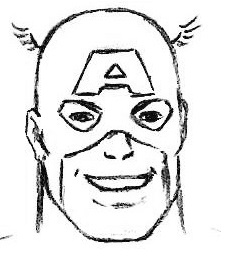 And the general plan: 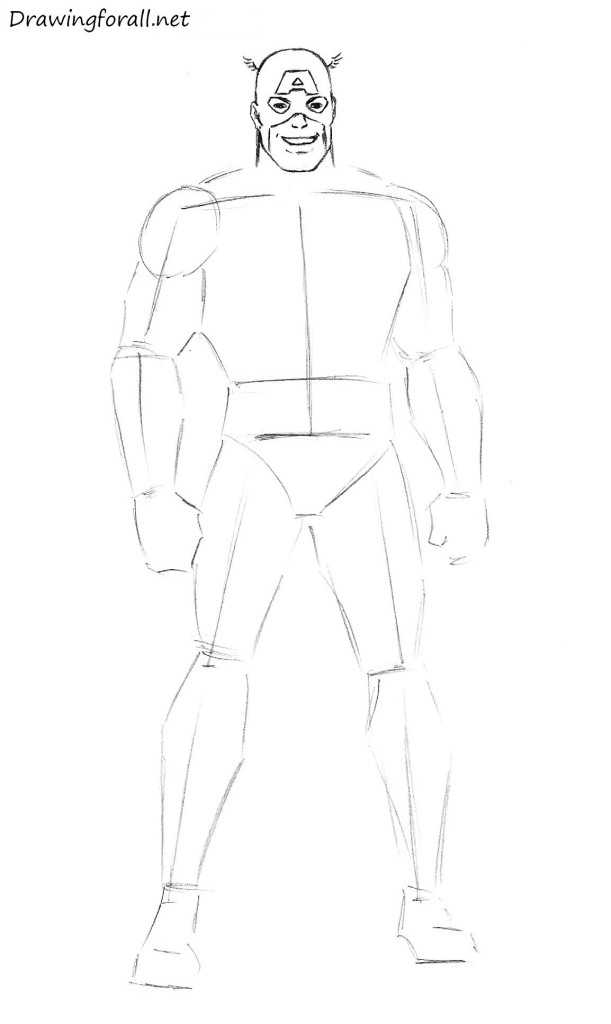 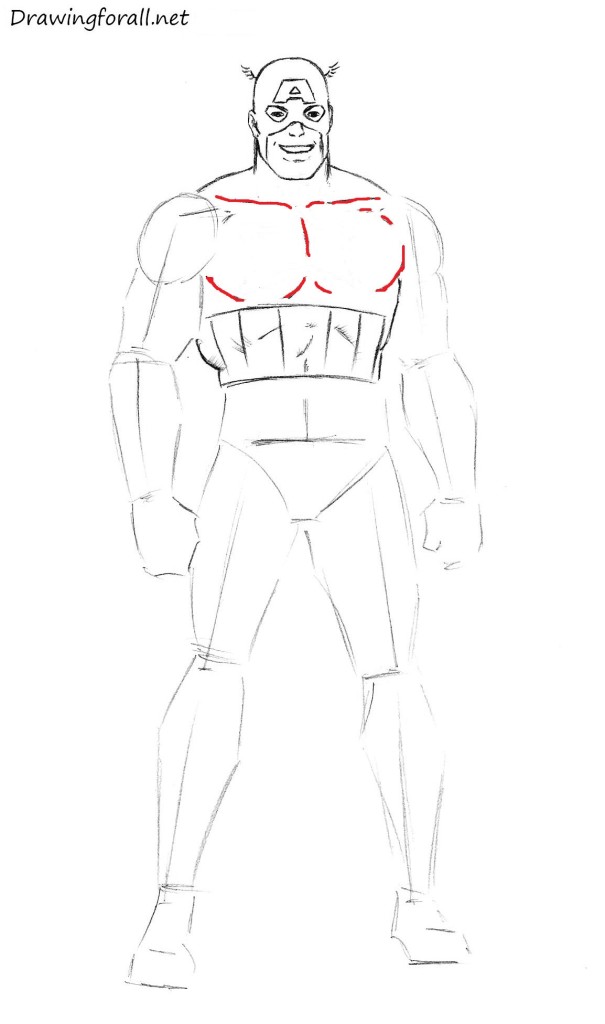 Then draw a contour of the neck. In this case neck looks like several vertical lines located between the mandible and the chest muscles. The last action of this step is drawing of the big star.

Practically all the forearm is hidden by the glove. So we should draw only contours of the glove and the fist. It is not easy because the human palm is most moving part of the human body. 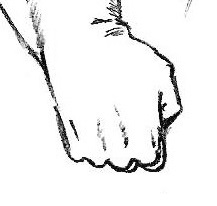 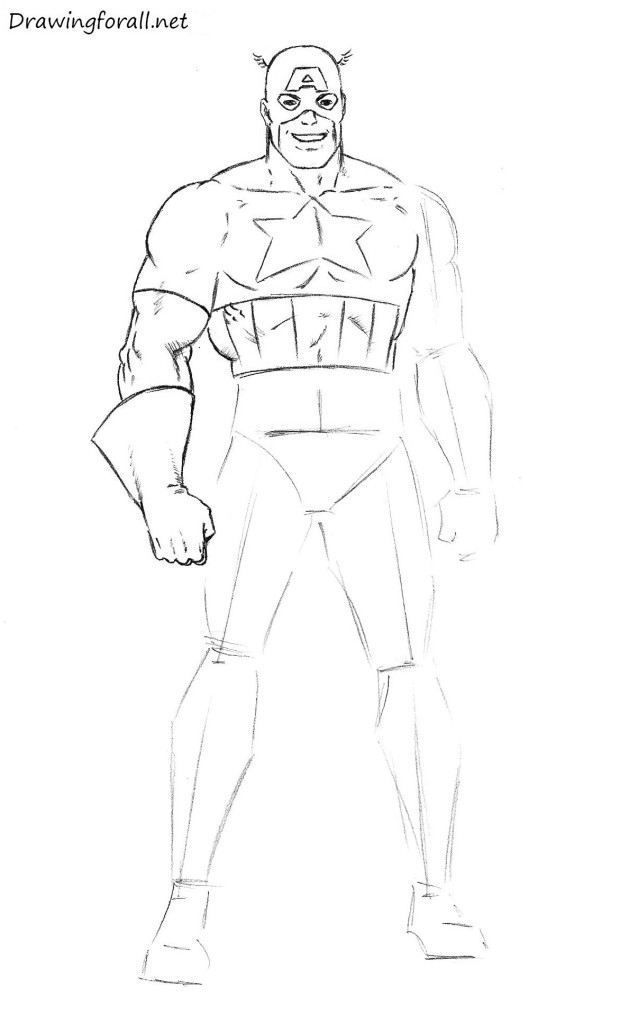 In this step we draw the other hand of our hero. We can see the more pronounced roundness of deltoid muscle. Don’t forget about lines in the cubital fossa area. This lines looks like the letter “Y”. Using the rounded lines draws Capitan America’s shield. And in this step we have a little bit different view of the fist: 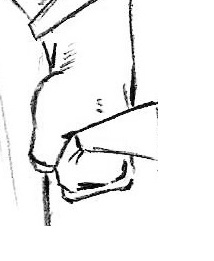 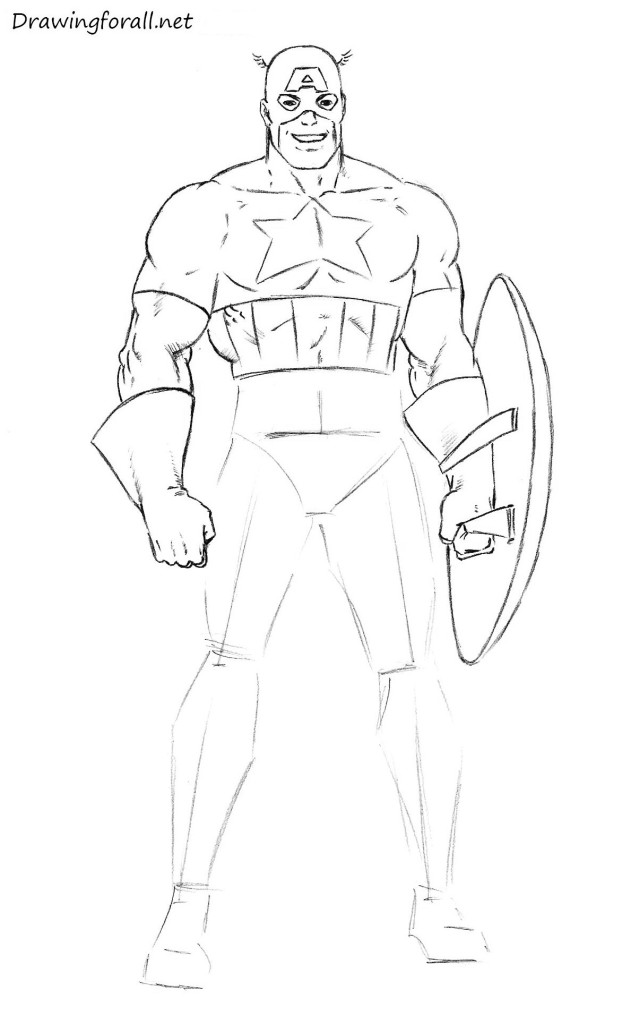 Now we have practically finished picture of the first avenger. In this step we should draw the pelvis area and the legs. Firts draw the belt, the darken the triangle of pelvis area. 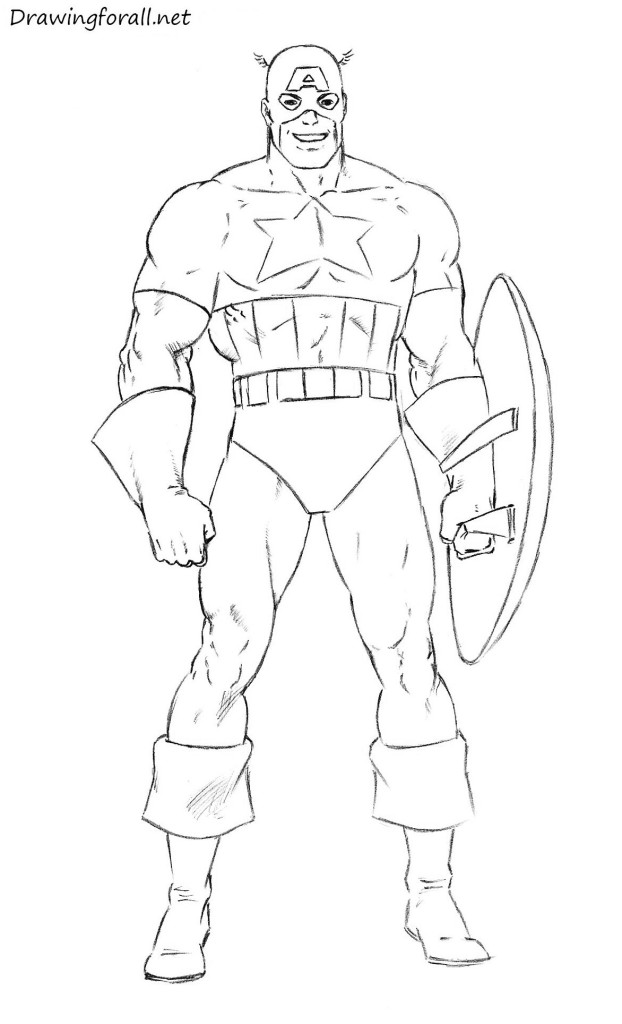 It’s pretty hard to believe, but we paractically made it, we draw Capitan America. Now we have only one task – the shadows. The final result of our drawing lesson looks like the classic example of the comics style’s drawing. So the shadows are bright black contrast stains. The right way to draw this shadows is 2 steps of the drawing:

Drawing tutorial on the most American superhero is over. Don’t forget to share this lesson if you like comics and drawing.