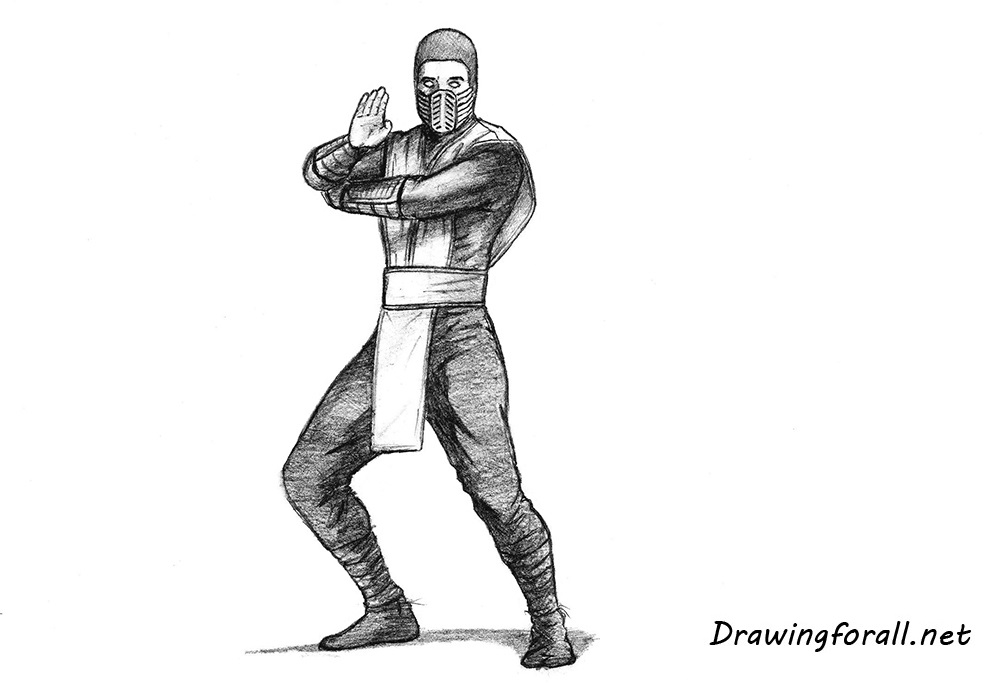 Scorpion is dressed in a black and yellow ninja suit, his mask hides naked (sometimes burning) skull. In general, there are many different kinds of scorpion’s suits. Today we will draw Scorpion in the suit in which he was dressed in the first Mortal Kombat movie. So, let’s start the tutorial and learn how to draw Scorpion from Mortal Kombat!

As in all our tutorials, we begin with stickman (a man-made of sticks and circles, by which we sketch out the position and main proportions). It stands in a fairly typical posture – he took a fighting stance and is preparing to release the spear out of the hand (get over here!).

Scorpion legs slightly bent and arms bent very much, so now it may seem that they are shorter than necessary. Notice, that in the first steps you should not press down too hard on a pencil. Use light lines and strokes for sketching. 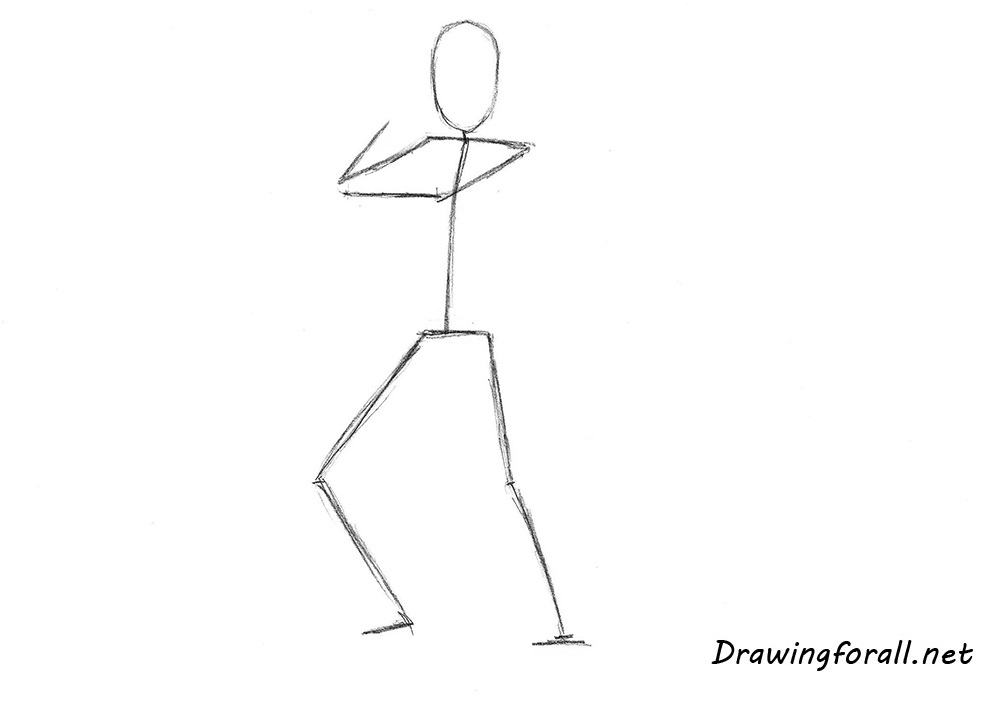 Now we add volume to the figure (add muscles and flesh to the bones). Sketch out the contours of the body and limbs of Scorpion using the stickman from the previous step.

First, sketch out the torso using a figure similar to the cylinder. Sketch out the hands and legs by using cylinders and draw knees and elbows using circles. Sketch out the palms – his right palm is opened and the left palm is hidden under the right elbow. Sketch out feet and move to the next step. 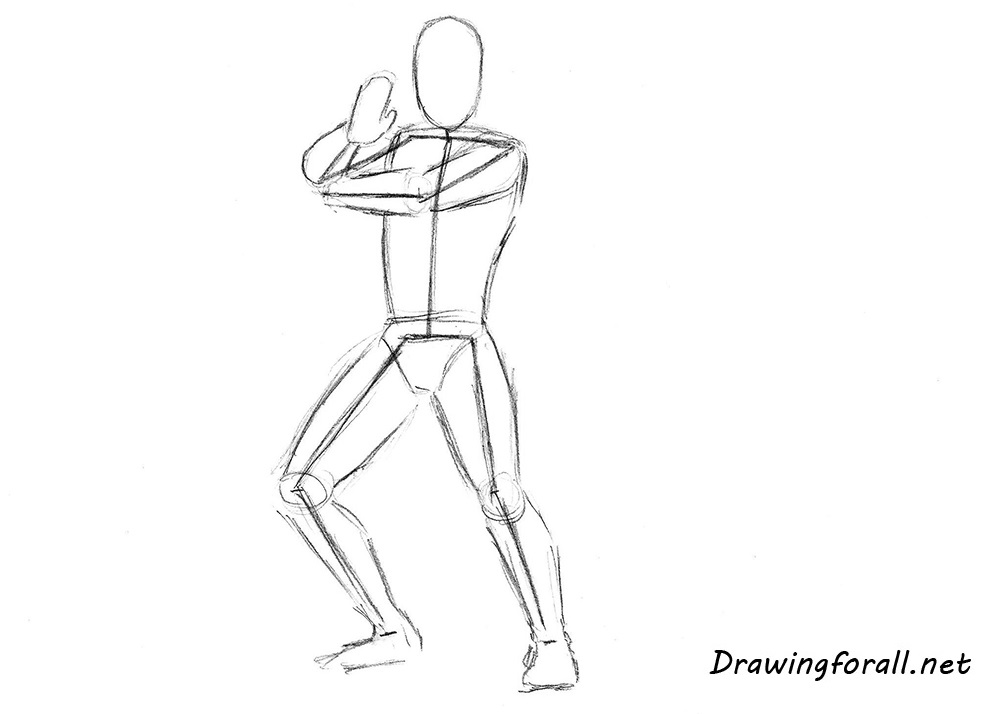 From this step, we will start to add details to Scorpion, but first, draw lines of the facial symmetry. The vertical line divides the face into two parts and will help us to find the center of the face and the horizontal line will help us to draw eyes.

Draw the upper part of kataginu (a traditional samurai vest). It is two strips of fabric that start from the waist, then move over the shoulders and end in the lower back. Sketch out the hands and arm protectors. Erase the guidelines of the torso and hands. 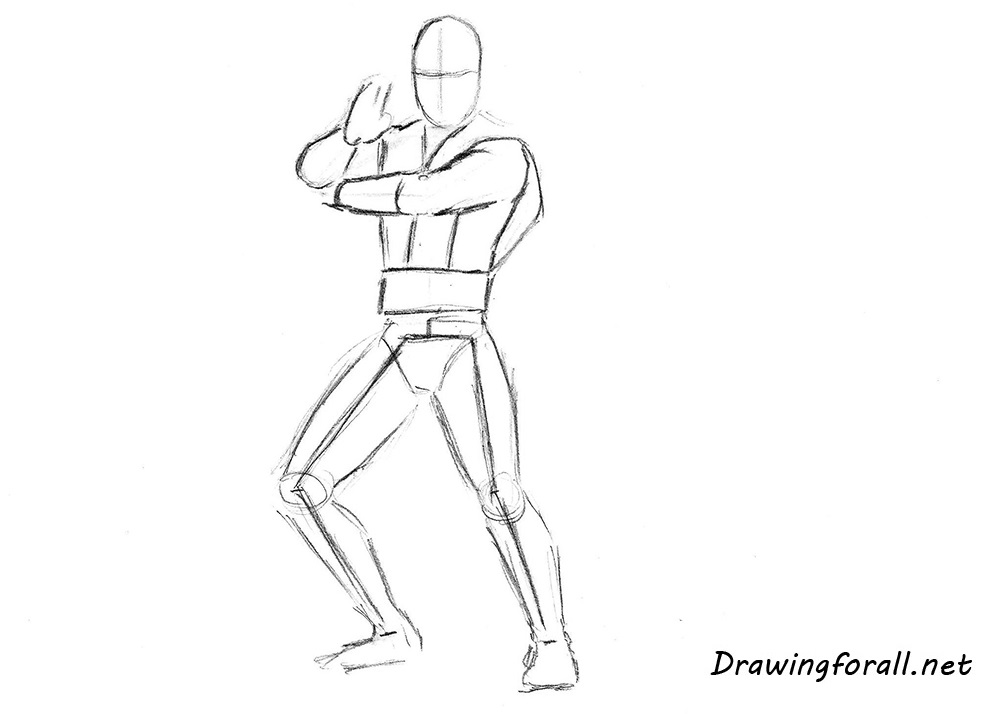 Continue what we started in the previous step – at this step we draw the legs. First, draw a hanging down part of kataginu using a rectangle. We need to convey the shape of the legs under the pants, so do not forget to sketch out the thigh muscles and calf muscles. Erase the guidelines from the legs and add some folds of fabric. 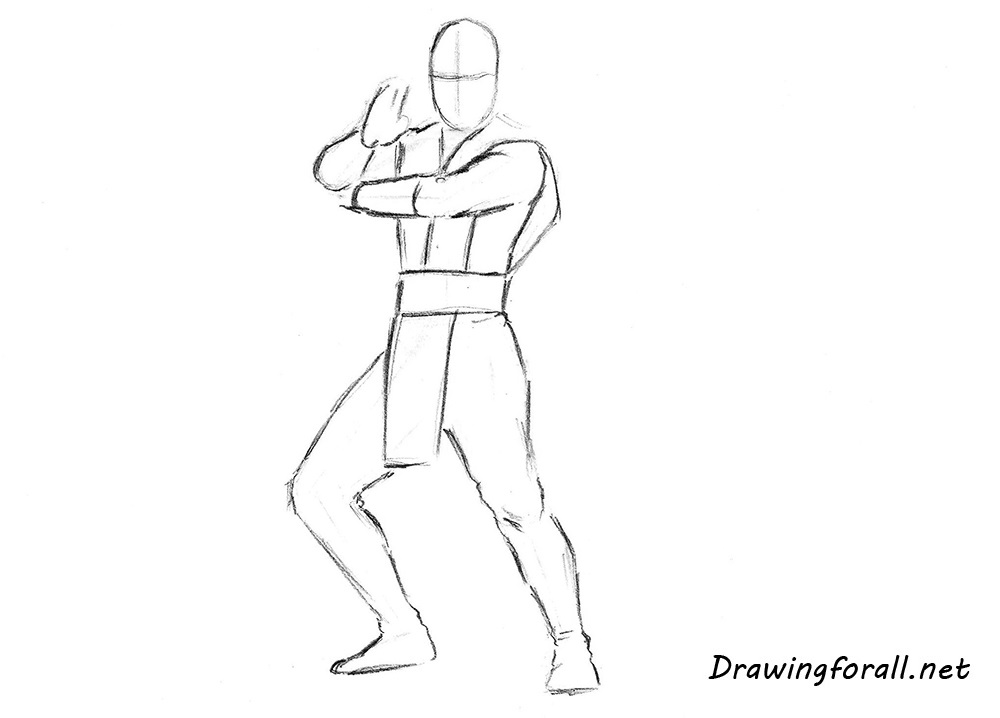 At this step, we continue to add details to Scorpion. Sketch the mask and eyes using the guidelines. Also in this step, add some folds to the suit. Pay attention to the folds of the parts of the suit that are on the torso – these folds are formed due to the bent arms and turn of the torso. Then add folds at the waist, knees, and ankles. 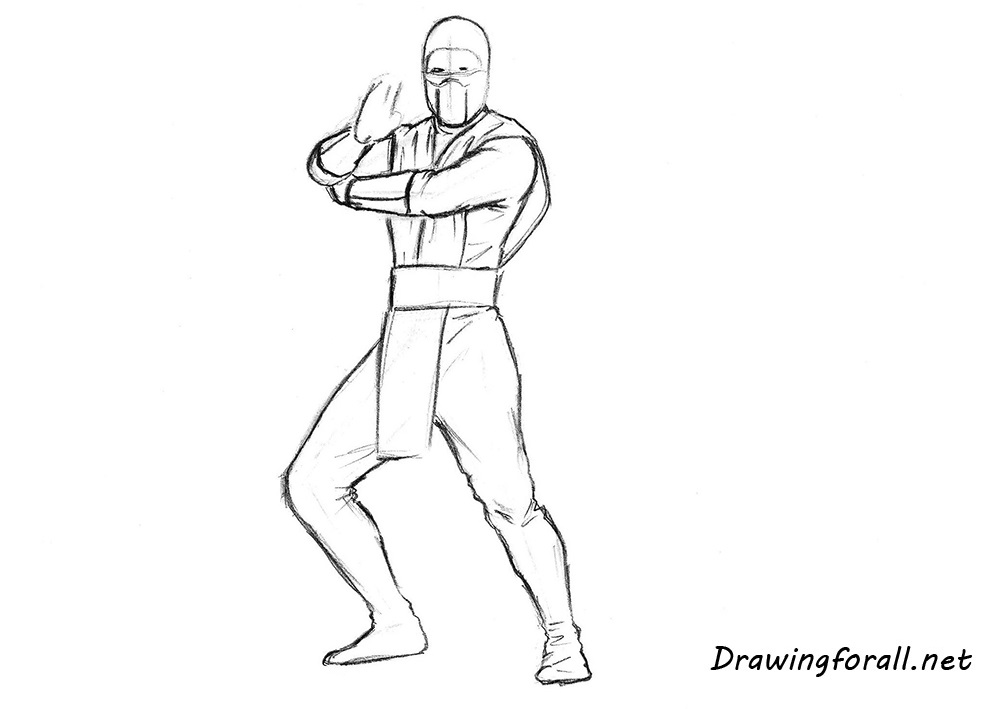 At this step, we finish the details. Start with the head of Scorpion. First, draw the blank and lifeless eyes. By using the dark and curved lines draw eyebrows. Draw the upper part of the nose and add some wrinkles around the eyes.

Using a curved line draws the opening of the mask. Draw the mask that hides the entire lower part of the face.

Then add folds of tissue right under the mask in the area of the neck. Draw hands. Here we need to draw the open palm and suit elements that hide the forearm of Scorpion. Draw seams on the kataginu. Draw the wide crossed strips of cloth on the shins of Scorpion. 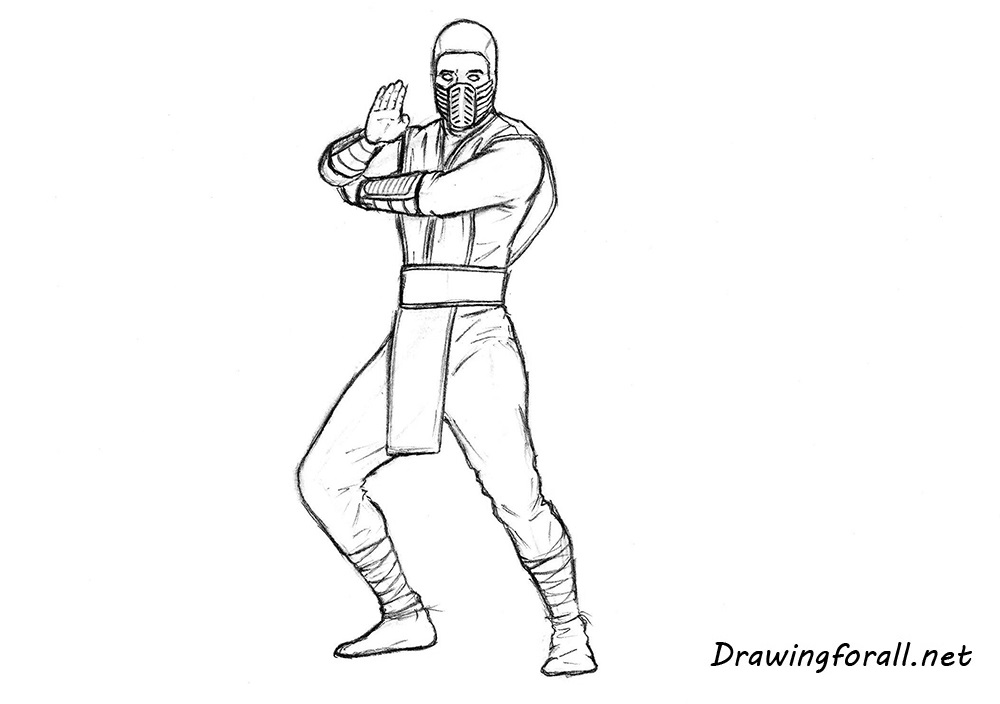 At the last step in the tutorial on how to draw Scorpion, we will add shadows and create the illusion of three-dimensions on paper. We recommend you to add shadows by using the hatching. At first hatch the dark parts of the suit.

Then determine where the light source – in our example, it is in the upper right part of the drawing. Once you have identified the source of the light, start to draw shadows in those areas where the light does not fall. 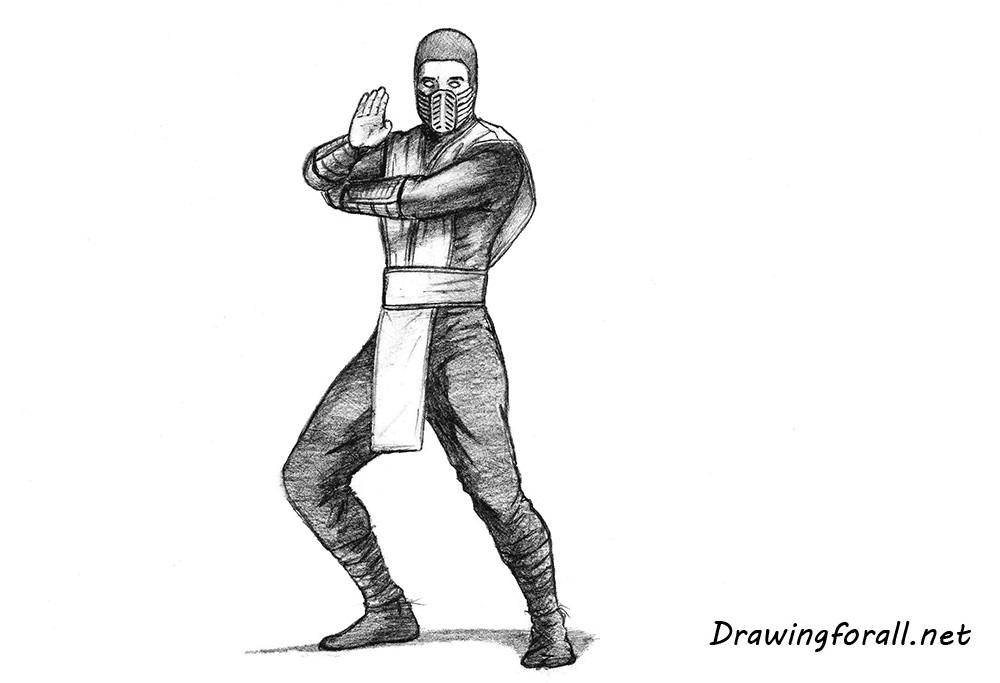 That was a tutorial on how to draw Scorpion from Mortal Kombat. We hope you enjoyed this tutorial. If you like such complex drawing lessons we recommend you tutorial in how to draw Wolverine. Stay tuned and wait for new drawing tutorials!