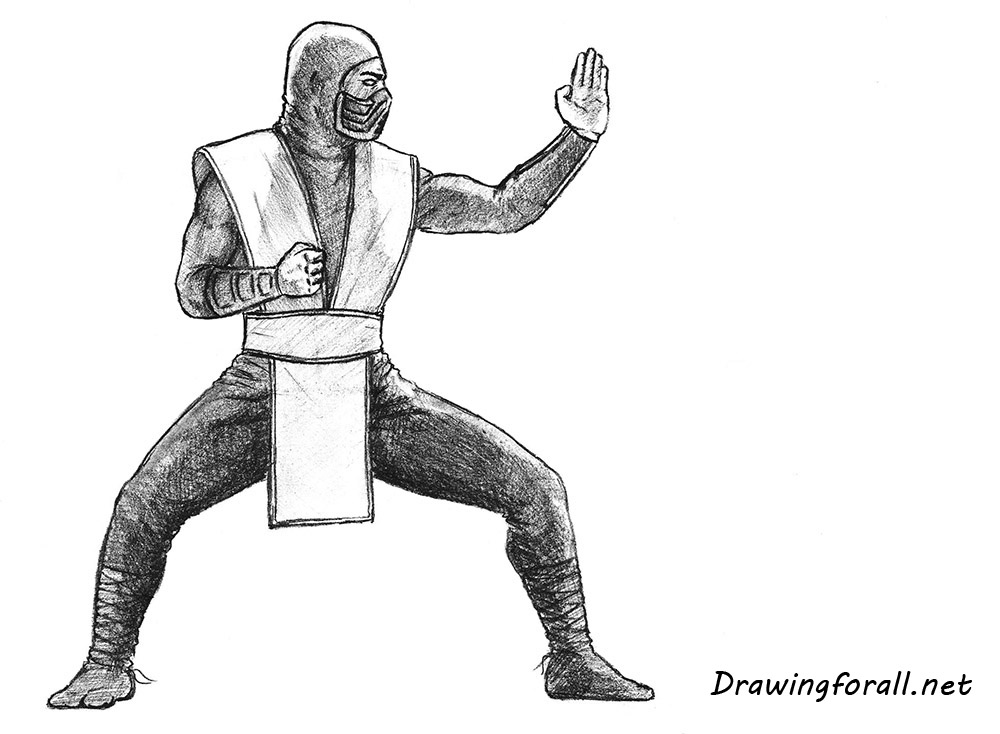 Hello everybody! It’s drawingforall.net with new drawing tutorial on one of the most famous characters from Mortal Kombat. This character appears in each game of the series, starting with the debut in 1992 in the first game Mortal Kombat. Today we will show you how draw a master of the ice and cold – Sub-Zero. There are two Sub-Zero in Mortal Kombat – the masked and unmasked. Both are the ninjas in blue suits that have the ability to generate and control the power of ice, although they were both born in the world ordinary people. And today we are going to draw Sub-Zero in the mask, rather Sub-Zero from the first  Mortal Kombat movie. So, let’s start the tutorial and learn how to draw Sub-Zero!

First of all outline the general proportions and pose of Sub-Zero. Note that Sub-Zero is in the waiting position – he is slightly crouched, arms bent at the elbows, his head slightly tilted forward. Start to draw with the head – outline the oval as a guide for the head. Using simple lines draw spine, hands and legs. Let us remind you one of the basic rules of proportions –  growth of the average human is seven heads.

And, as in our previous drawing lessons we want to remind you, that in the first steps you should try to not press down too hard on a pencil. Use light and smooth strokes for sketching in this steps. 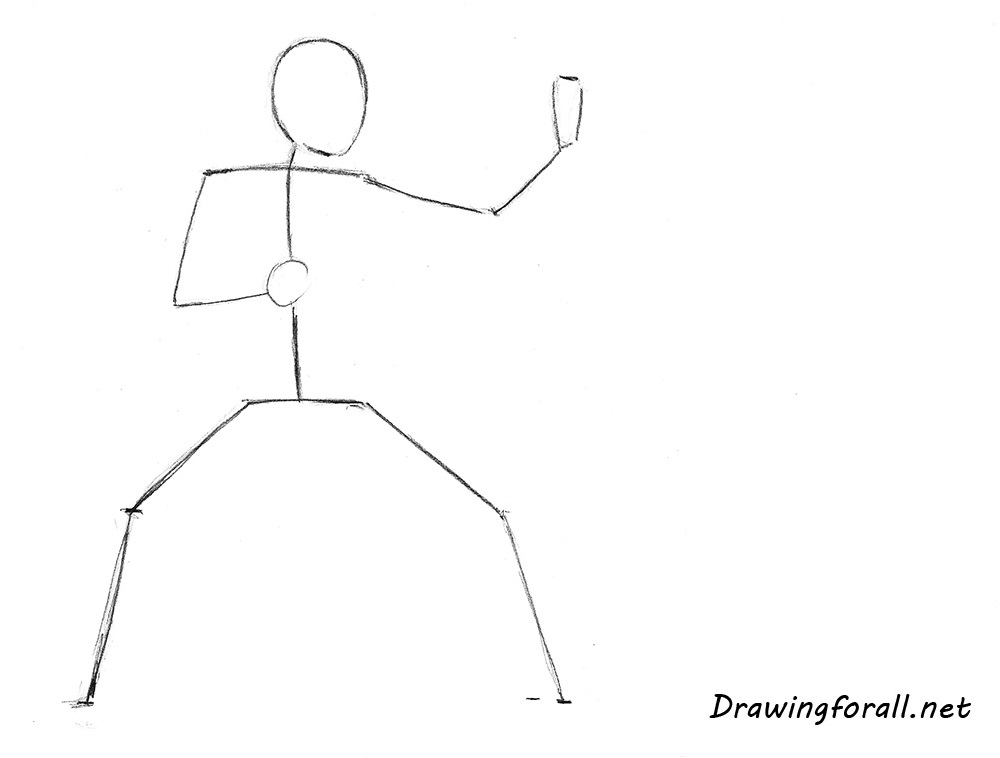 From this step we will flesh out Sub-Zero’s body, i.e. add volume to the figure using simple geometric shapes. Here we will add volume to the upper part of the body. But first sketch out the line of the eyes, which is located approximately in the middle of the oval. Then draw the upper part of the samurai’s vest – kataginu. In the further steps we will try to visually convey its structure and texture which is made of pretty tough tissue. 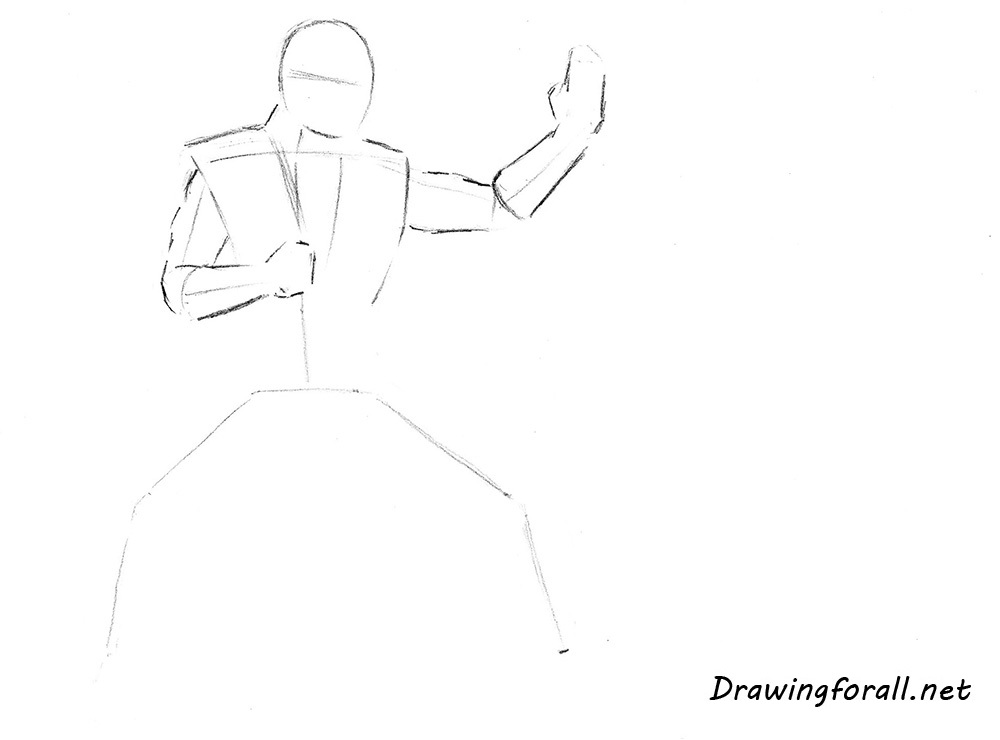 Shapes and guidelines are ready. From the next step, you should press harder with your pencil in order to get darker lines on your drawing. 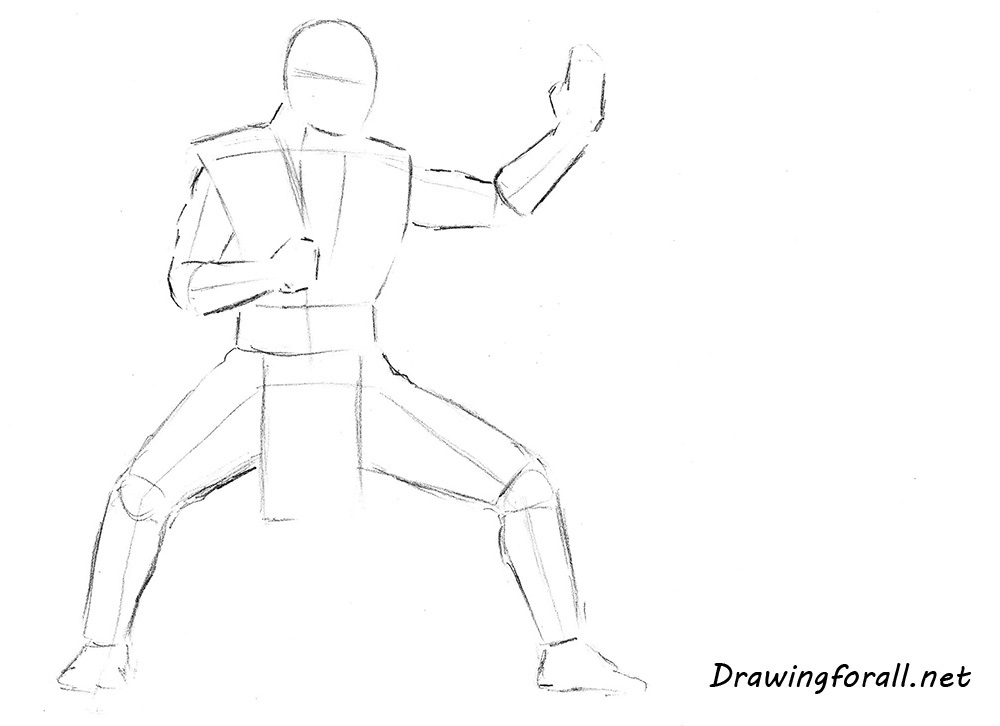 And we continue our tutorial on how to draw Sub-Zero step by step. In this step we will add details to the head. Make the upper and left sides of the oval a bit more narrow (do not forget that the head is not round). Draw the line of the neck and add to it some folds. Sketch out the shapes of the nose and chin under the mask. Then draw line above the eye line for the hood’s opening. 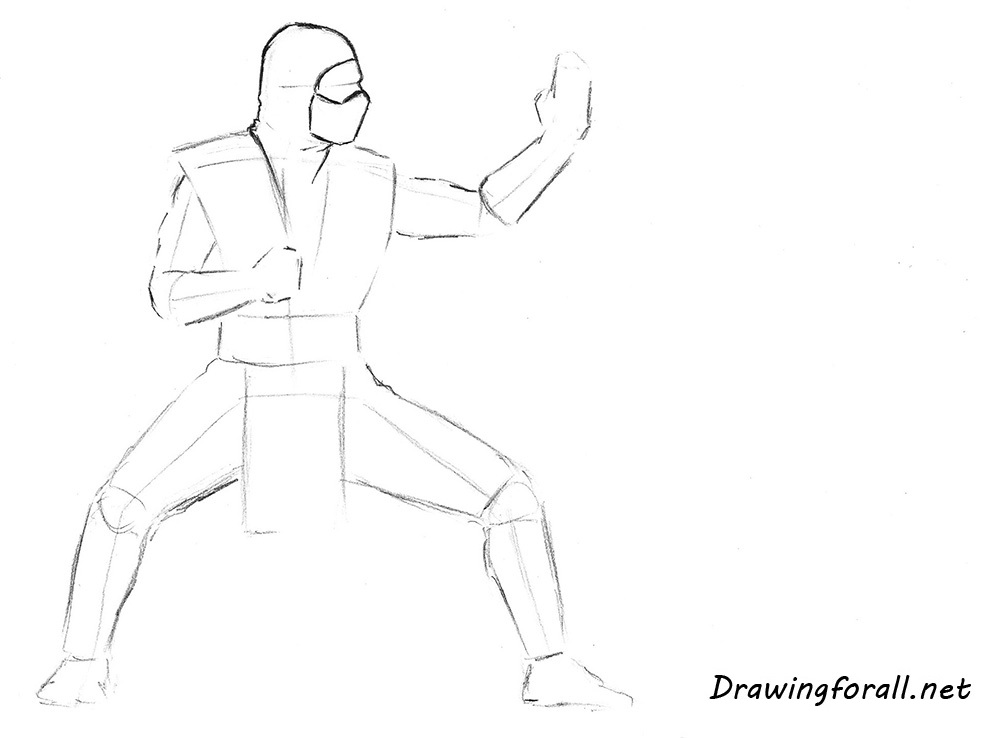 Now detailed draw Sub-Zero’s head. First draw eyes, using the eye line from the second step. Draw it in the form of a narrowed oval. Draw an eyebrow using a curved line. Notice, that Sub Zero’s look is very concentrated and focused. Add wrinkles above the brow and below the eye. Draw the contour of the ear under the hoodie. The top edge must be on a same level with the eyebrow, and the bottom of the ear – at the same level with the tip of the nose. Start to draw the mask. There are a lot of types of Sub-Zero’s masks. From the simple mask as in the first Mortal Kombat to super detailed as in Mortal Kombat X. And as we draw Sub-Zero from the movie, the mask is also will be as in Mortal Kombat movie. Draw the creases on the bottom edge of the mask, which are just below the neck.

We have made a larger version of the picture on this step, so that you can see all the details of the head and a mask:

And the full version of the image: 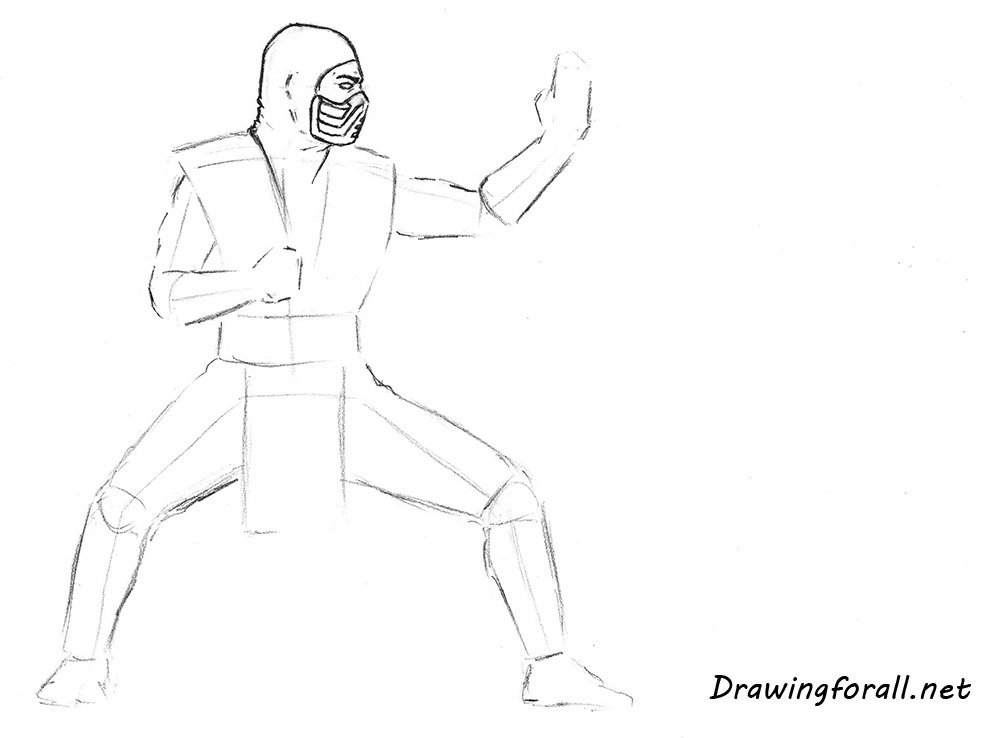 At this step we draw the neck and torso of Sub-Zero. First, draw the folds on the neck using the short strokes. The head is turned to the side, and therefore formed a lot of folds in the area of the neck and upper part of the chest. Move on to drawing the body. Darken the lines of the vest and draw the shape of the shoulders. Notice, that the belt in the middle of the abdomen is slightly wider than the sides. Darken the hanging down part of the kataginu and move to the next step. 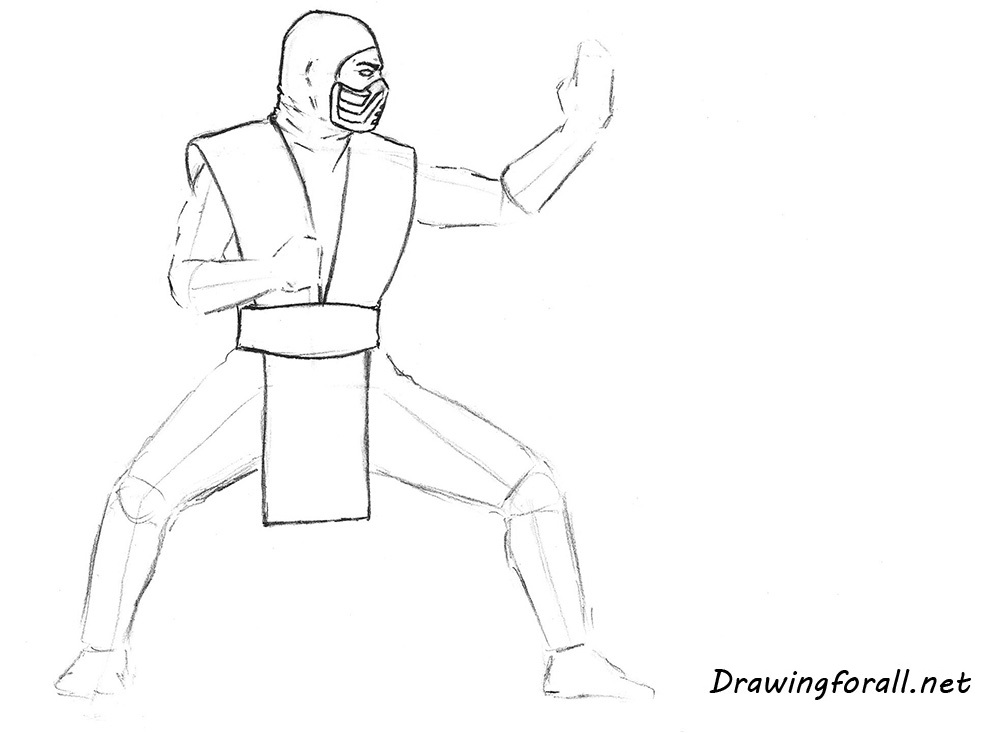 At this step we draw the hands of Sub-Zero. Let’s start with the deltoid muscle of the right hand (left delta is under the vest) – depict it in a semicircle. Then draw biceps, triceps, elbow and forearm. Notice, that the arms are widened in the mid-biceps, and the forearms tapers to the palms. Draw folds in the areas of the elbows and armpits.  Outline the sleeve protectors and start to draw palms. First draw the right hand. Draw the back of the fist, knuckles, and clenched fingers. Move to the left hand. Draw an open palm with the fingers. Draw an open palm with the fingers. Outline the phalanges and wrinkles inside of the palm. 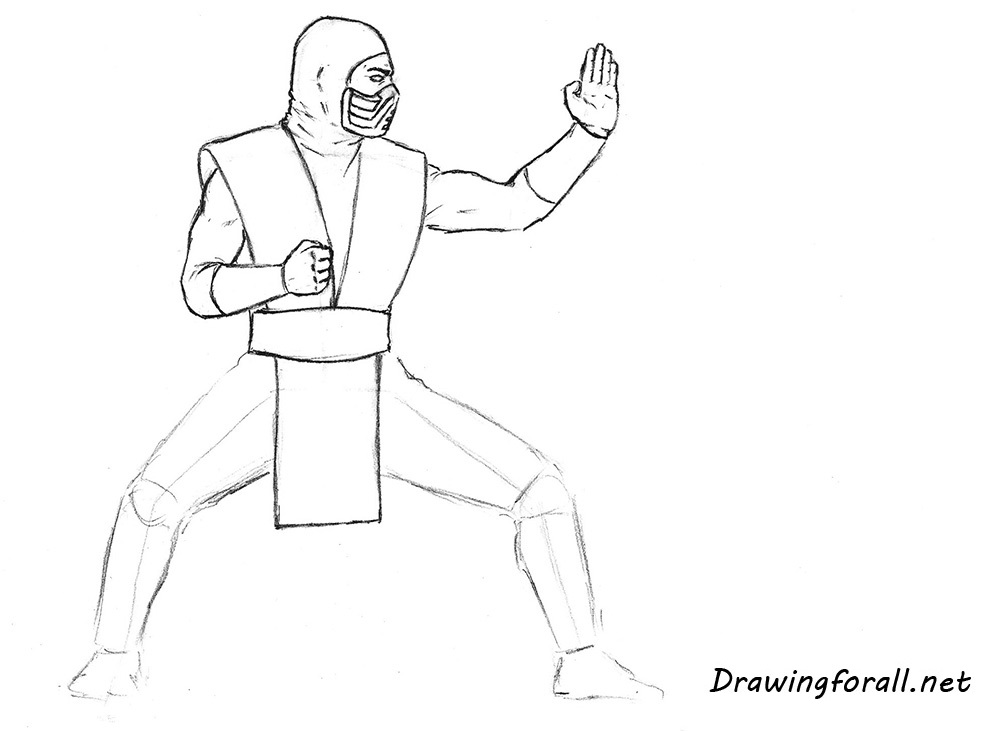 The upper part of Sub-Zero is finished and we start to draw the lower part. So, we have already identified pose of the legs and gave it a volume in previous steps, now the time for the details. We need to convey the shape of the legs under the pants, so do not forget to draw the thigh muscles and calf muscles. Now about the folds of tissue – they are formed in places where the fabric is pulled tight or compressed. Draw the folds inside of the hips and in the area of the knees. In the same step, draw wide strips of cloth on the shins of Sub-Zero. Erase all the guidelines, draws the feet and move to the last step of how to draw Sub-Zero. 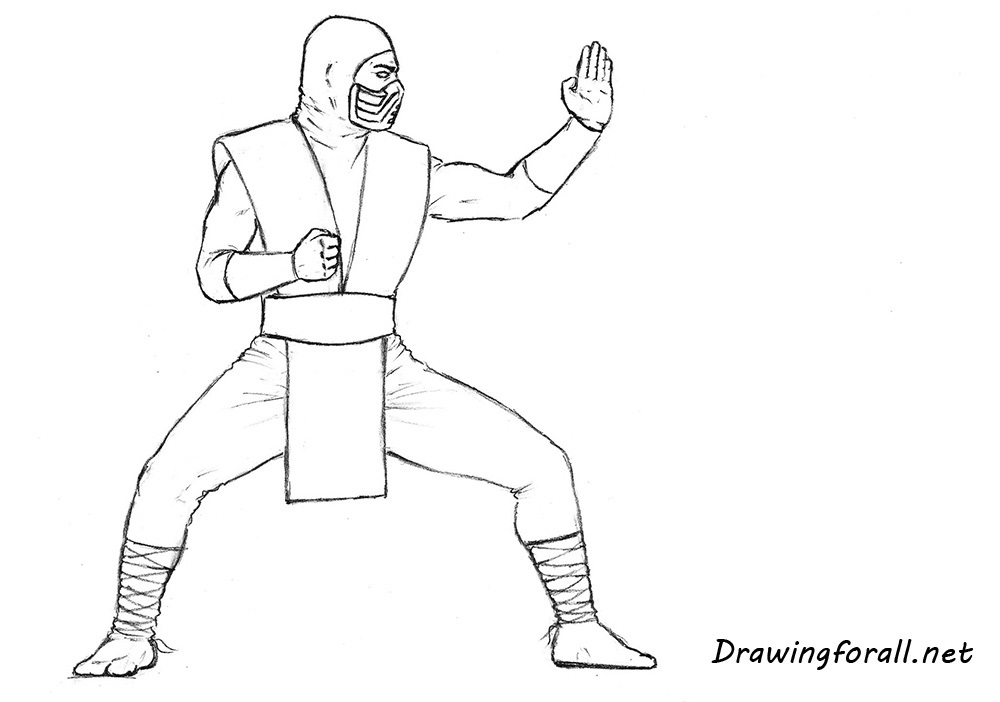 Remains the last stage – adding the shadows, but first we need to erase all unnecessary guidelines and strokes. Now look at Sub-Zero and determine where the light falls. In our example, the light source is behind the warrior, and to convey it, we hatch the inside of the head and body, leaving a strip of the light around the figure. Start with head. Hatch the internal part leaving a little strip of light around the head. Draw the strip of shadow on the chest using a light hatching. Add the shadows to the hands and legs the same way as you did it with the head. In order to figure was as realistic as possible, add more shadows in places of folds and leave more light in convex areas.

It was the tutorial on how to draw Sub-Zero step by step. We hope you enjoyed this drawing lesson. Ahead you will find a large number of drawing lessons about Mortal Kombat universe. Subscribe on us in social networks, stay tuned and wait for new drawing tutorials on drawingforall.net!