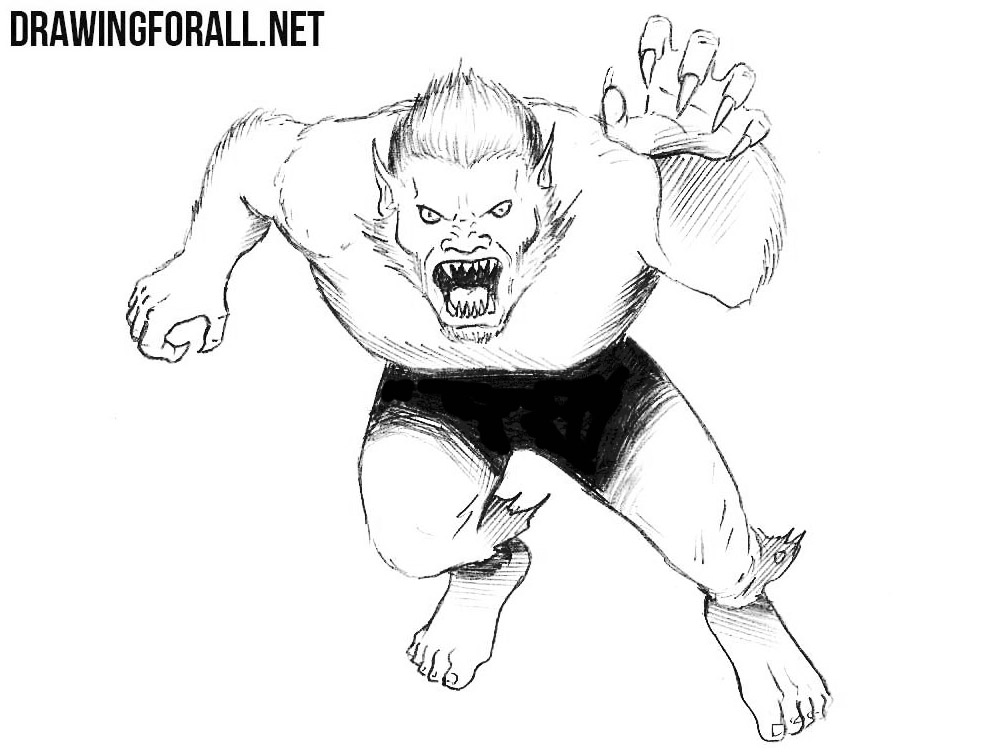 On the planet Earth there is a huge number of different cultures, and each of them has its own myths and legends. They tell of bold heroes, beautiful ladies and terrible monsters. And it’s about such a monster that will be today’s lesson.

We decided to make a collective image of the monster, and in this lesson we will describe the basic principles of drawing monsters. So let’s start the tutorial on how to draw a monster.

If we draw a monster, resembling a human (not some kind of cthulhu), we need to start from the skeleton. Using very light, almost invisible lines, we need to sketch the outlines of the “stickman” – a man consisting of circles and lines. As you can see, everything is very simple – the head, thorax and pelvis are drawn in the form of ovals, and the arms, legs and spine in the form of simple lines. 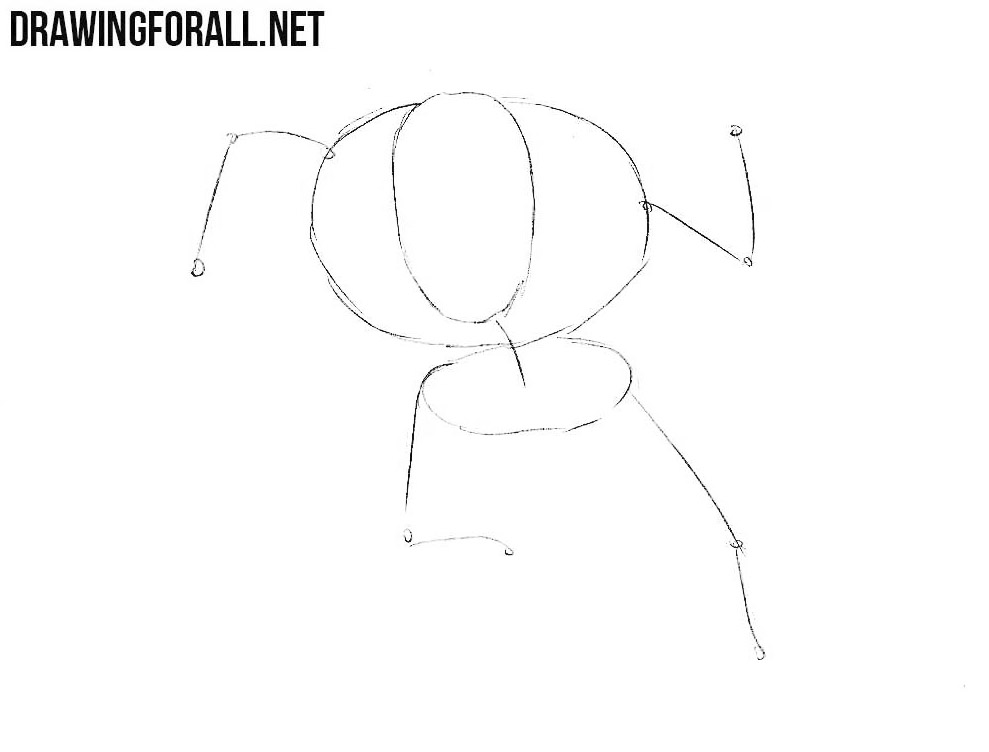 In order to make it easier for us to draw details of the face, we need to sketch two lines intersecting in the center of the head. Next, outline the shape of the torso and limbs with simple geometric shapes. Sketch out the outlines of the hands and feet and move to the next step of the lesson about how to draw a monster. 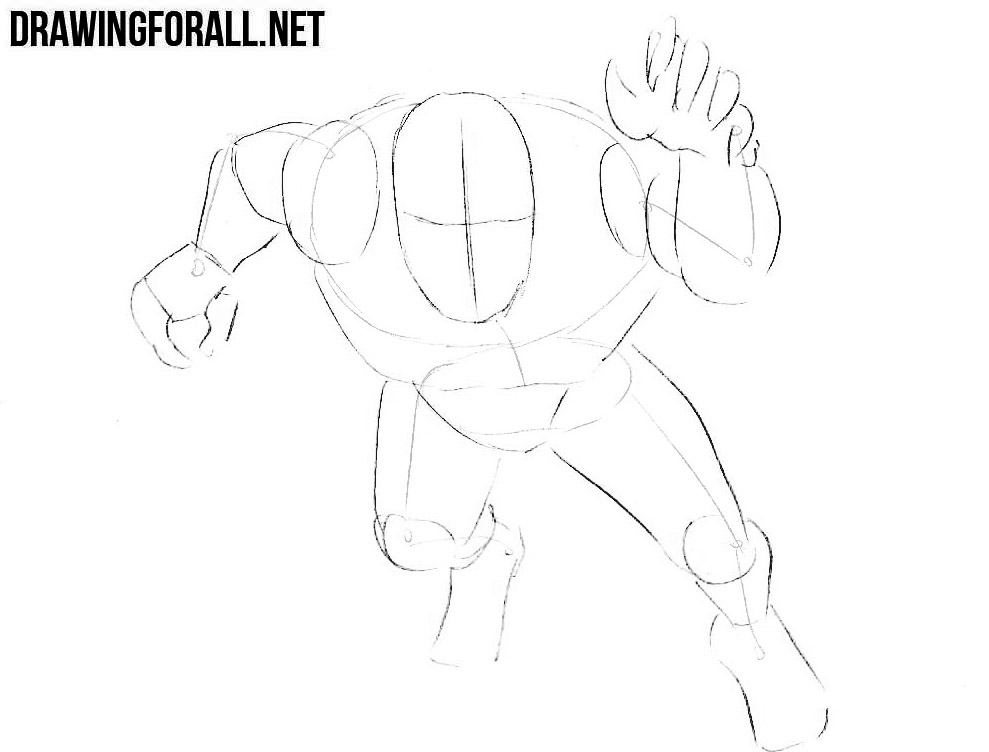 Now it’s time for us to works with the details. Starting with this step, we will use dark and clear lines. Orienting the horizontal lines from the previous step, draw out evil eyes. A little lower draw out the nose and a wide-open mouth dotted with teeth. We add wrinkles on the face and move further. 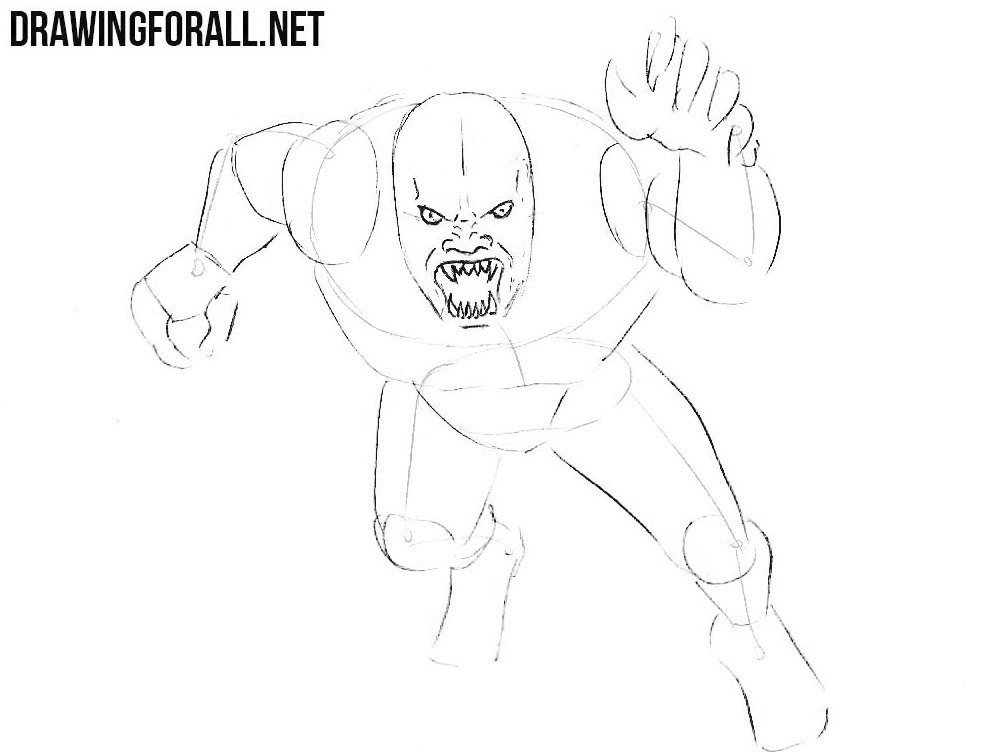 We continue to draw the head of the monster in details. First of all draw out pointed ears and outlines of the face. Using clear lines draw out hair and beard, as shown in our example. Remove all unnecessary lines from the head and move to the next step. 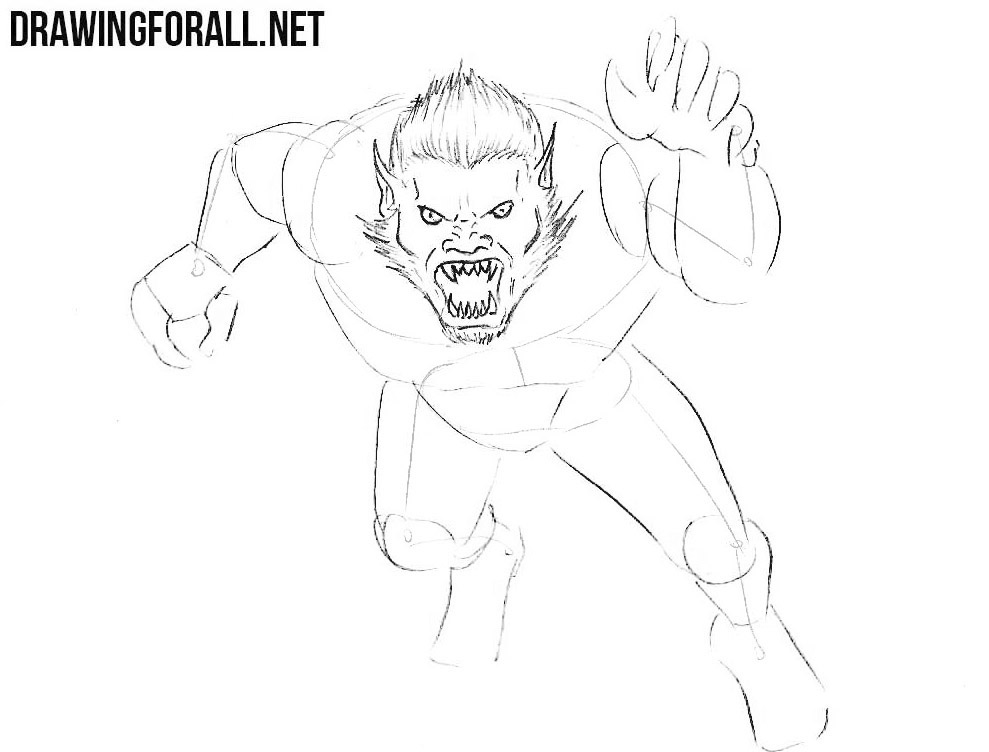 A fairly simple step in which, with the help of smooth lines, we need to draw out the outlines of the torso. You can add a few details to the monster’s body. For example, you can draw armor or wings, to make your monster more interesting. 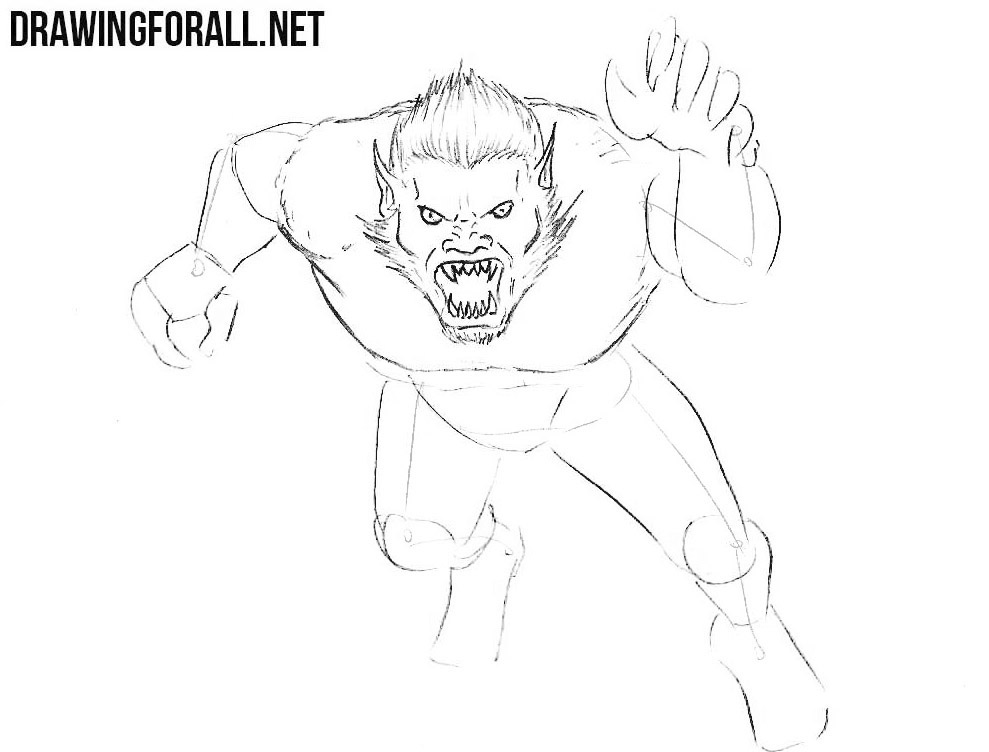 Now let’s work with the arms of our monster. Using short strokes draw out the outlines of the hairy arms of the scary monster. Arms  must turn out to be powerful and muscular. Next, draw large hands with sharp claws. 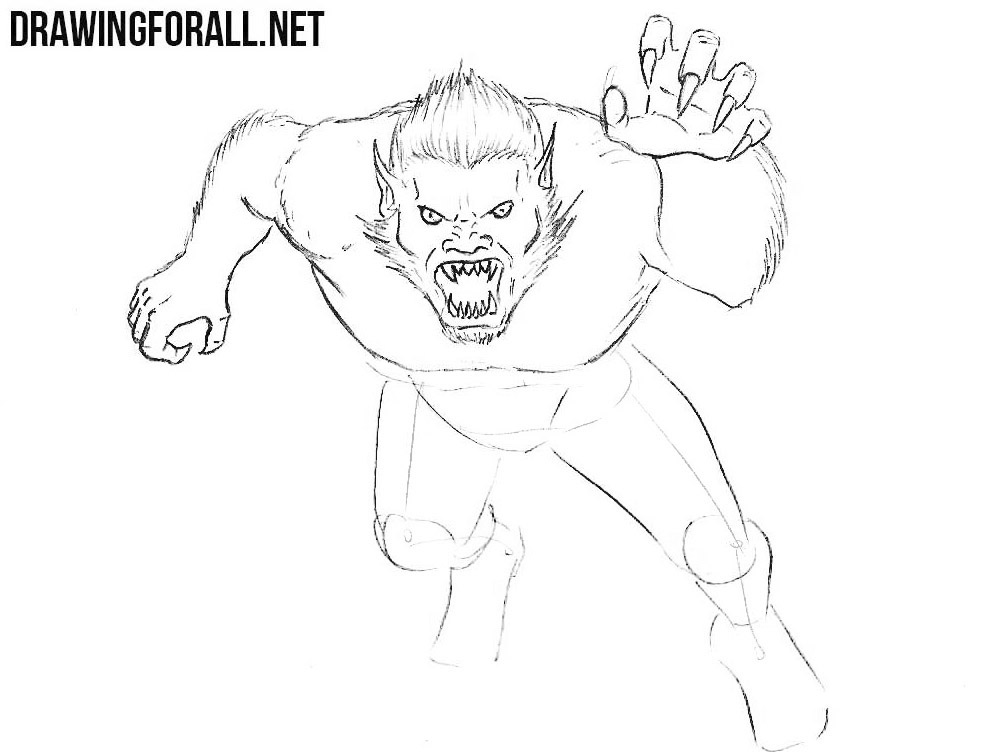 In this step, we will work with the lower part of the monster body. Draw out the outlines of the feet, dressed in tattered pants. Next, draw large feet (you can draw long and sharp claws on them like on the hands) and remove all the remaining unnecessary lines. 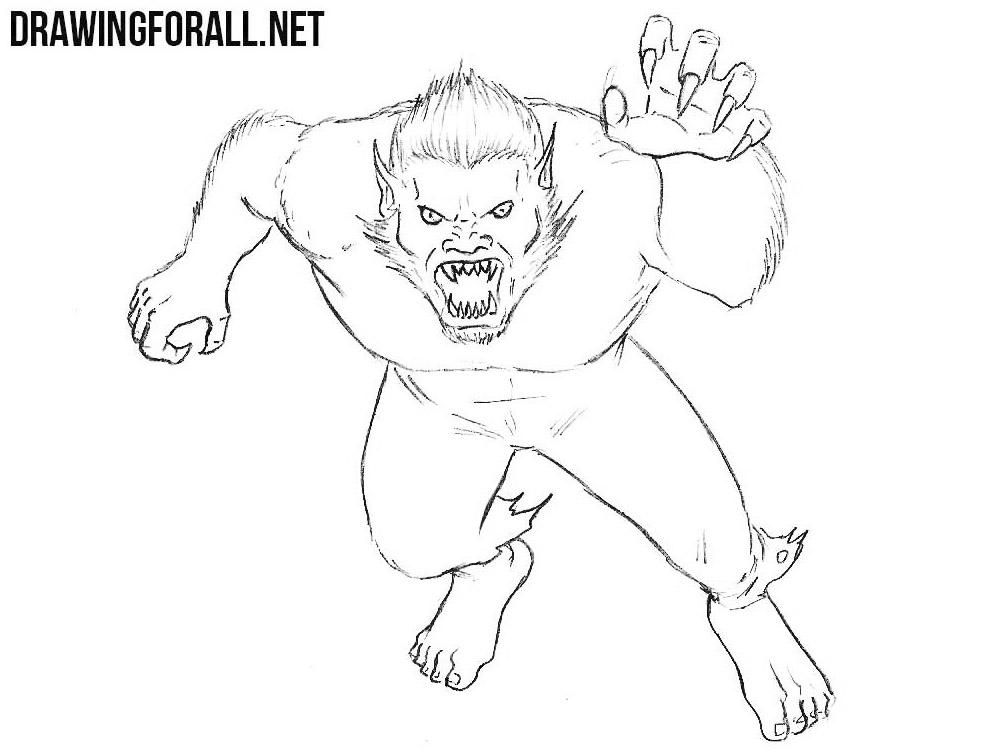 The monster drawing is almost ready, but it looks very flat. In order for the drawing to look more lively and voluminous, we will add shadows. In our example, we made black and contrast shadows like in comics, but you can draw shadows in a different style.

Recall that in this tutorial we drew a collective image of a monster. Using the principles and techniques shown in this lesson, you can draw any other monster, such as a werewolf or minotaur.