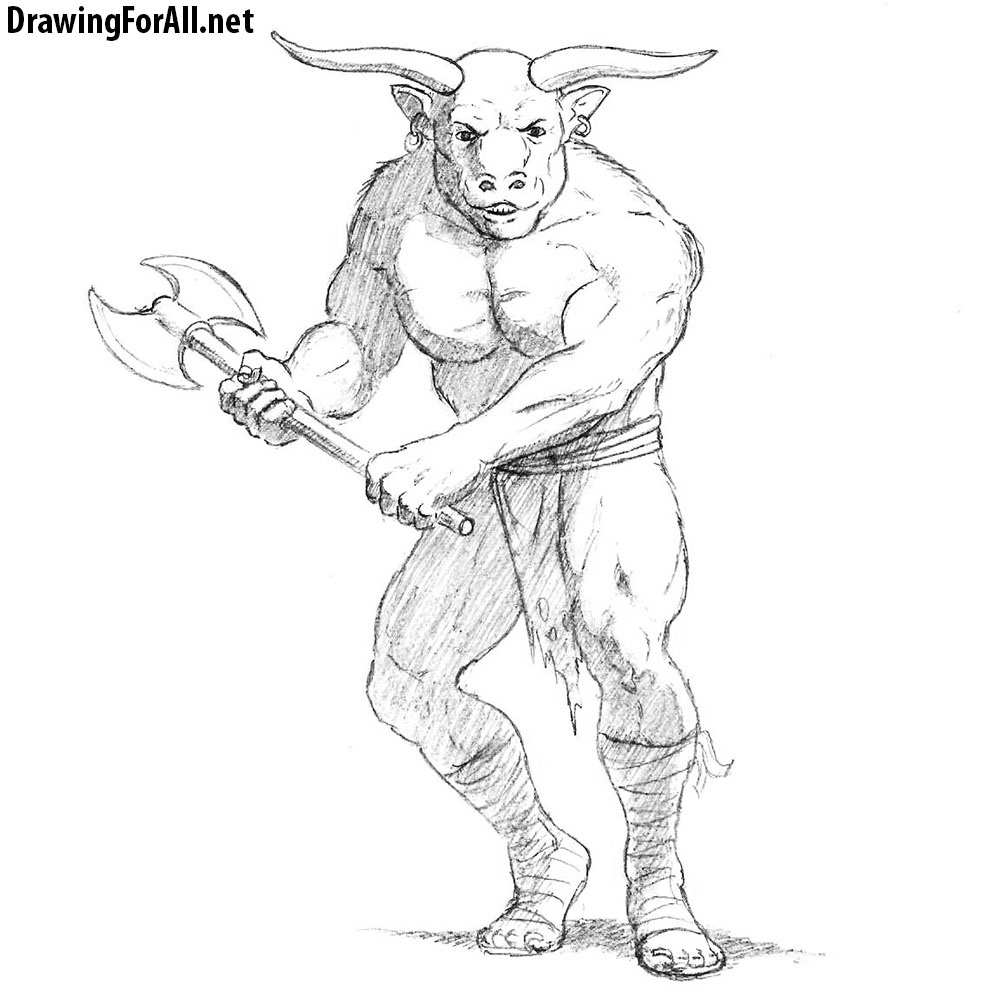 Hello, dear artists, lovers of fantasy and myths. In this drawing lesson we will show you how to draw minotaur. Initially it was a beast from Crete, a man with a bull’s head, who lived in the Labyrinth and killed by Theseus. But over time minotaur got out of the Greek myths and began to appear in various works, including books in the fantasy genre, and computer games.

Here we start like in all other drawing lessons – with a man, made of circles and lines. The main difference from human figure here will be that at this stage the head will have a circle form, rather than oval. In the rest do the same as always – sketch out the head and body with very light lines. In our example, the minotaur is holding a battle ax and walks in our direction, but you can choose any other pose. 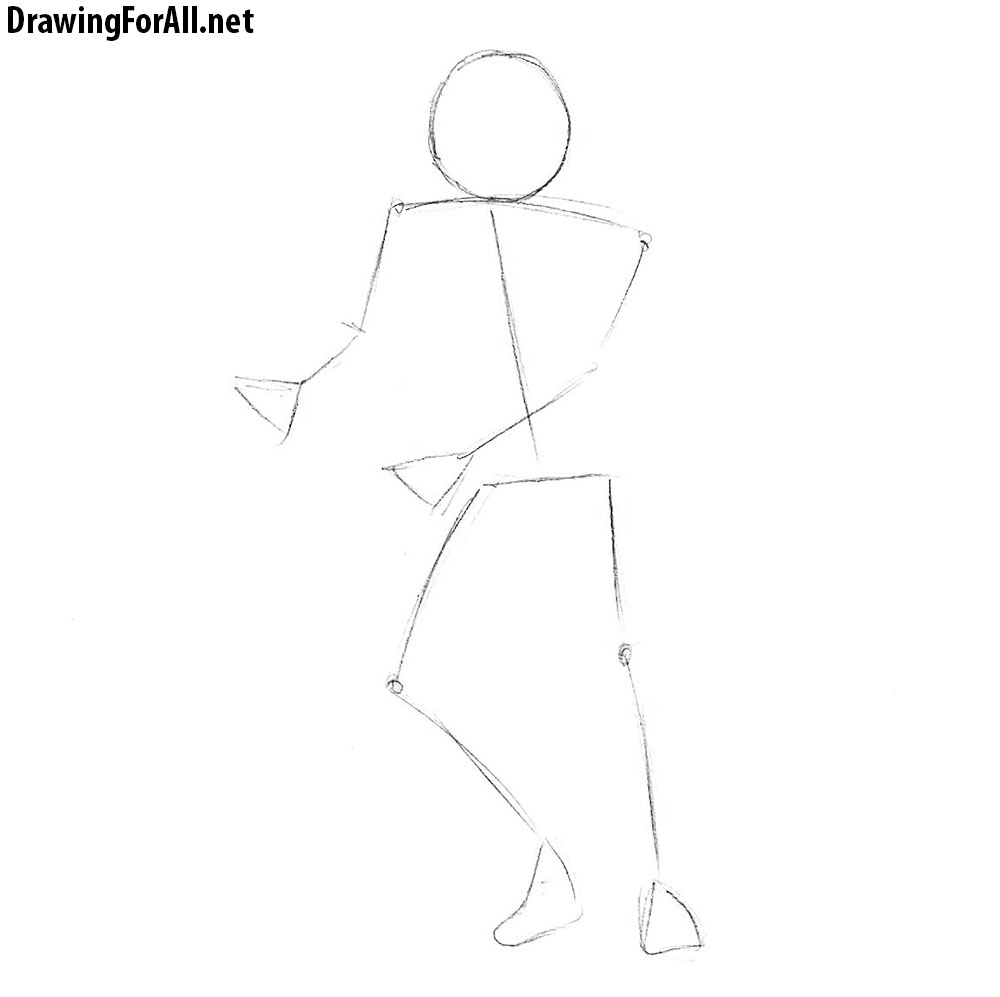 Here we add volume to the figure of minotaur. Using simple geometric shapes sketch out the hands, torso and legs. But first of all, sketch out lines of symmetry of the face (horizontal and vertical lines intersecting at the center of the face) and sketch out a muzzle using a circle. 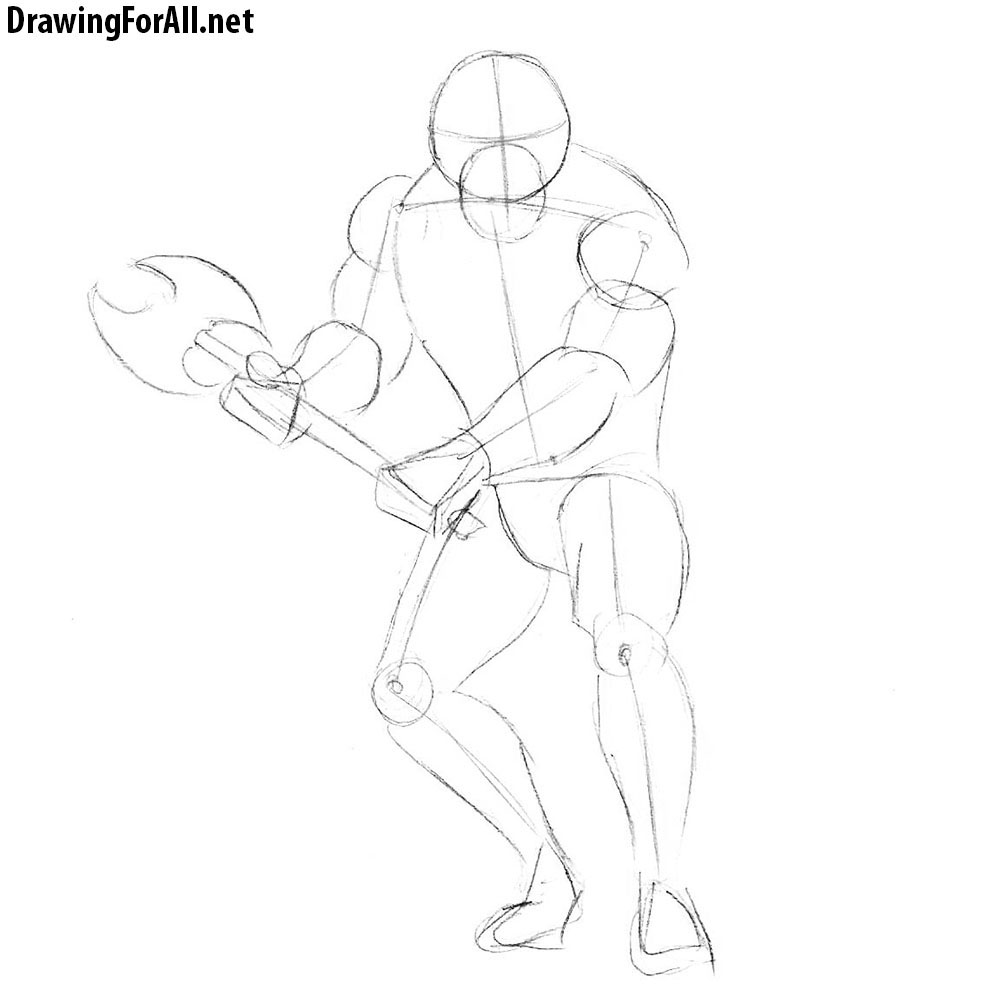 Let’s add some details to the face of minotaur. At the sides of the head sketch out the large horns and ears. Using the horizontal line on the face draw the eyes and brows. On the muzzle draw the nostrils and mouth. 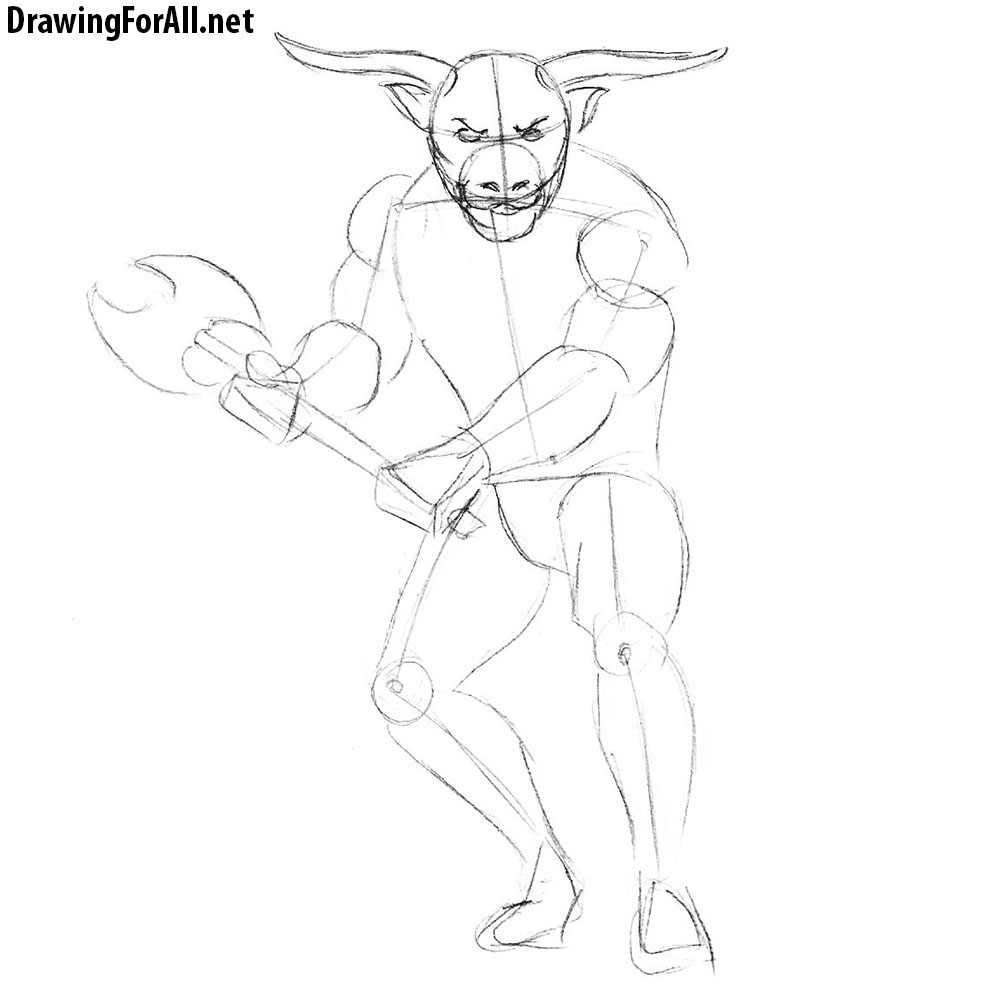 Erase the guides from the face. Draw out the lines of the horns, ears and facial features. Add some wrinkles to the face. Also you can add some details, such as earrings. 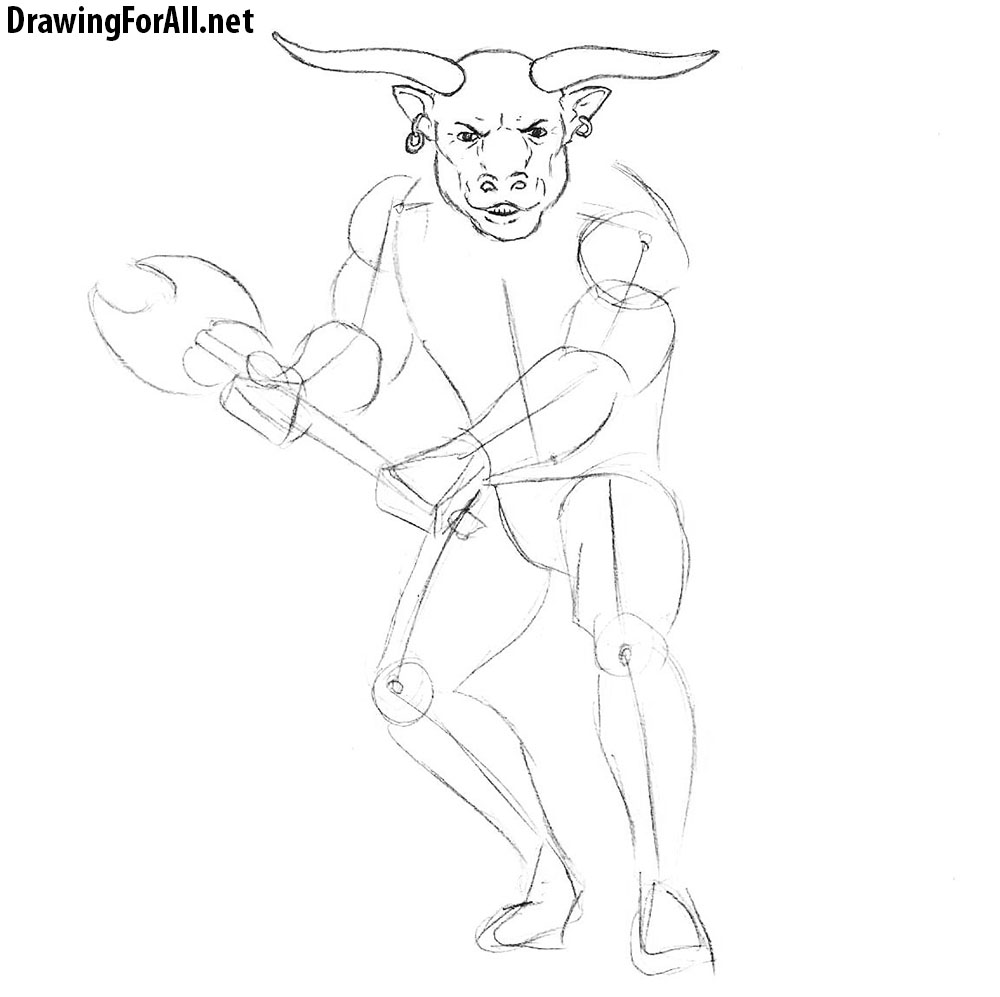 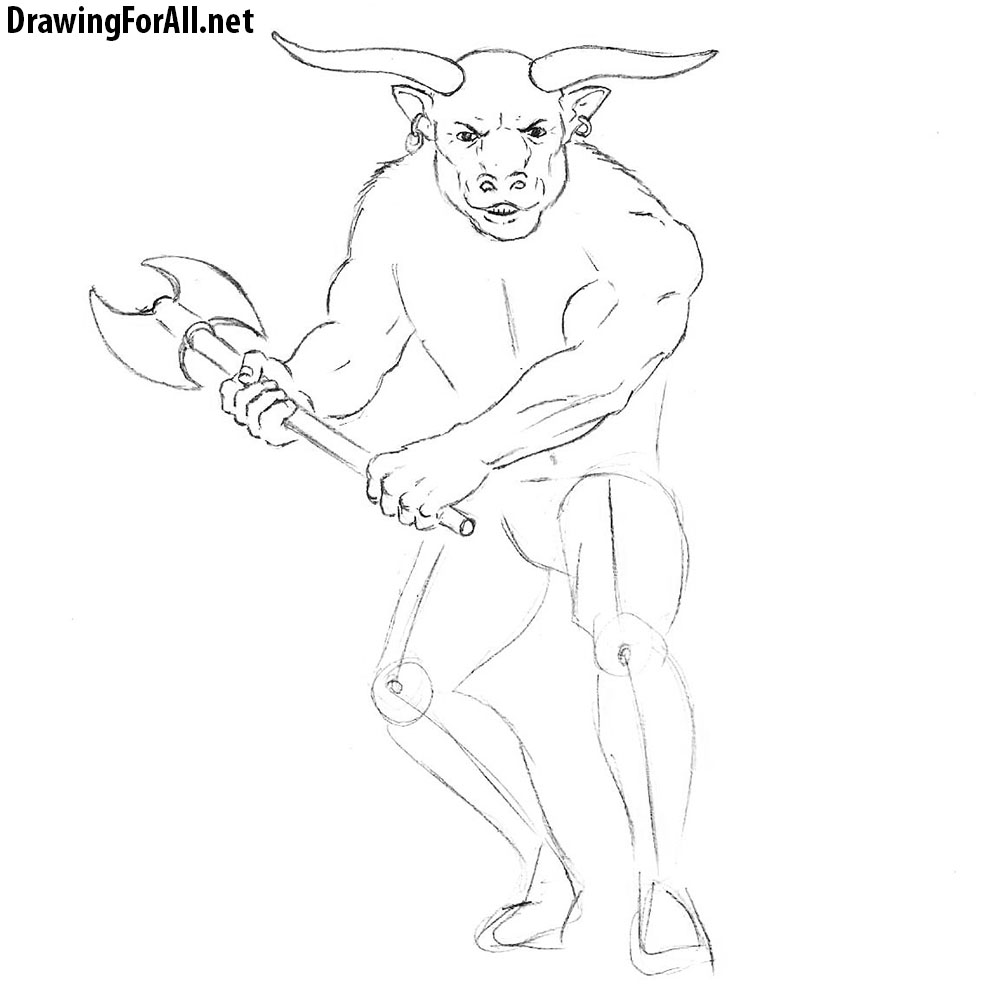 Draw the large pectorals. Draw some lines of the muscles on the pecs. Some lines on the torso should be furry, as in our example. 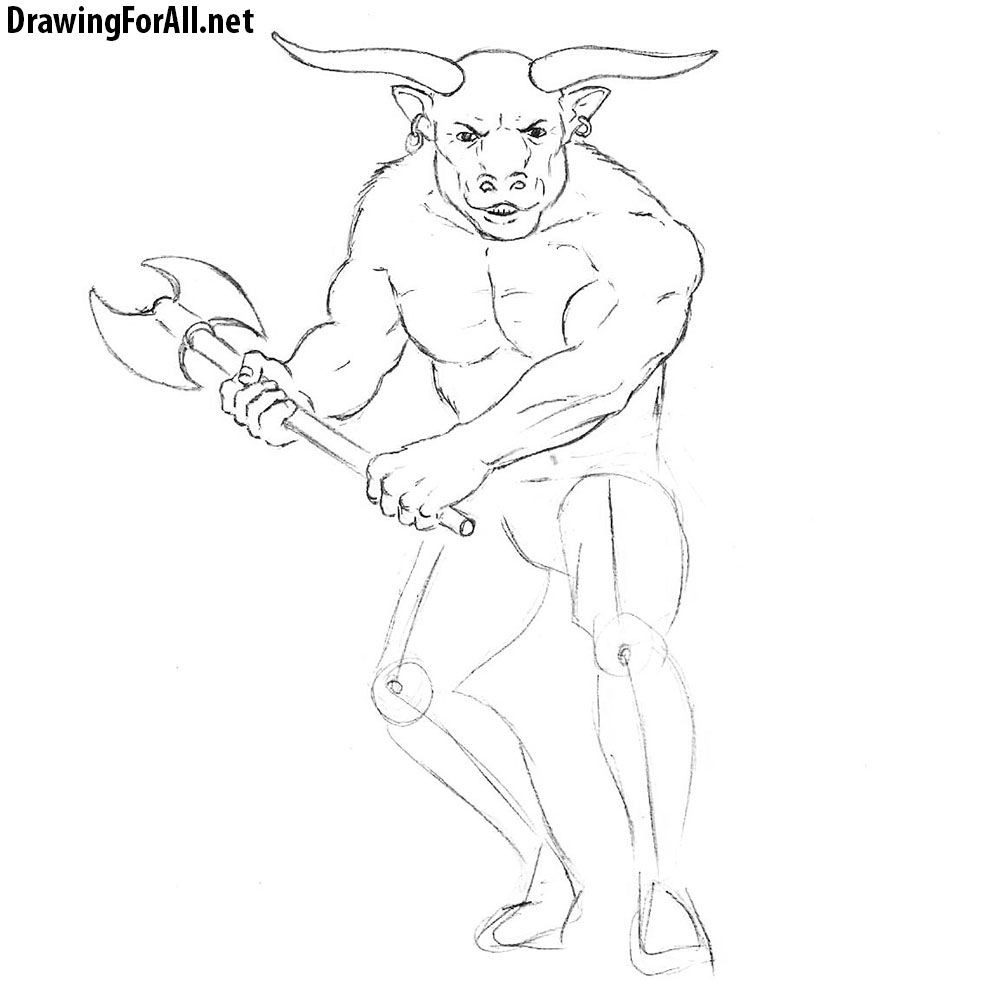 Draw out the lines of the legs. In all works of literature and computer games minotaurs wear loincloths. Draw it as in our example. Note, that the contours of the legs should be furry. 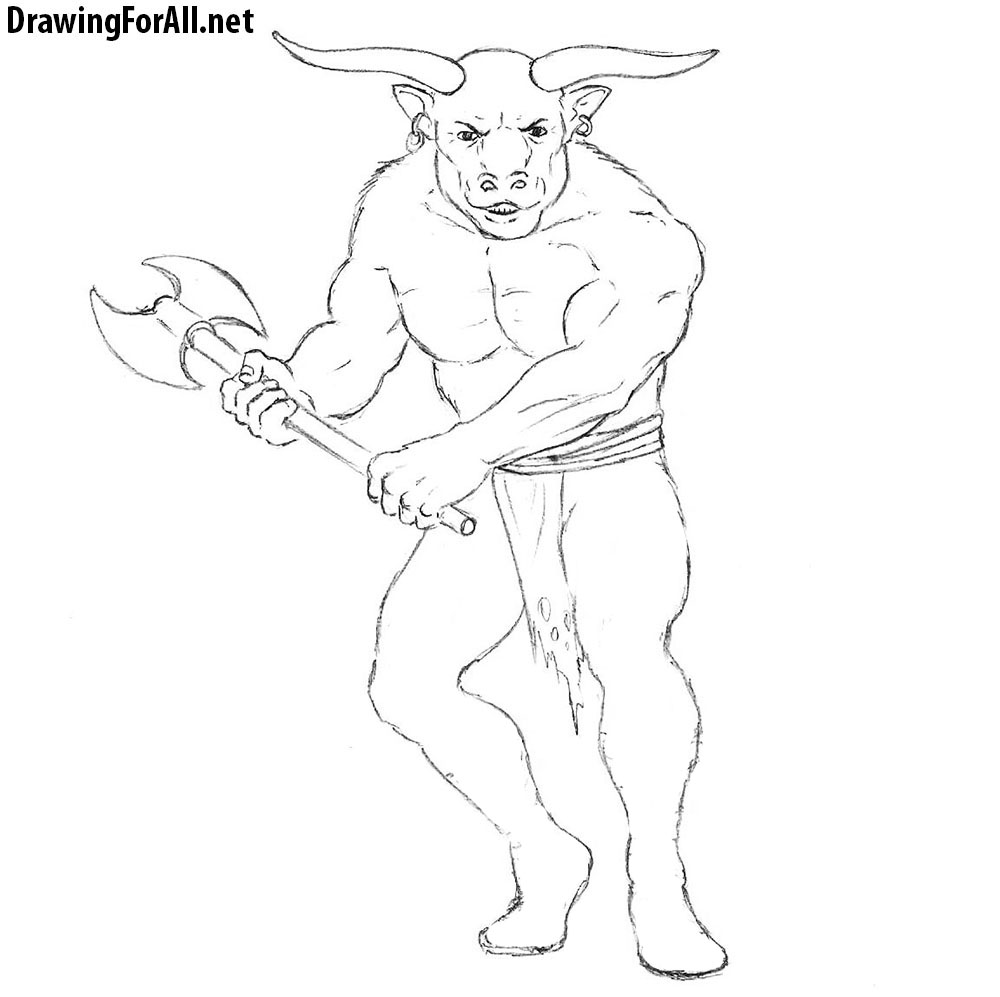 Draw the lines of the muscles. Draw the stripes of fabric on the shins. Draw out the toes and nails. Similar furry contours we have drawn in the lesson on how to draw a werewolf. 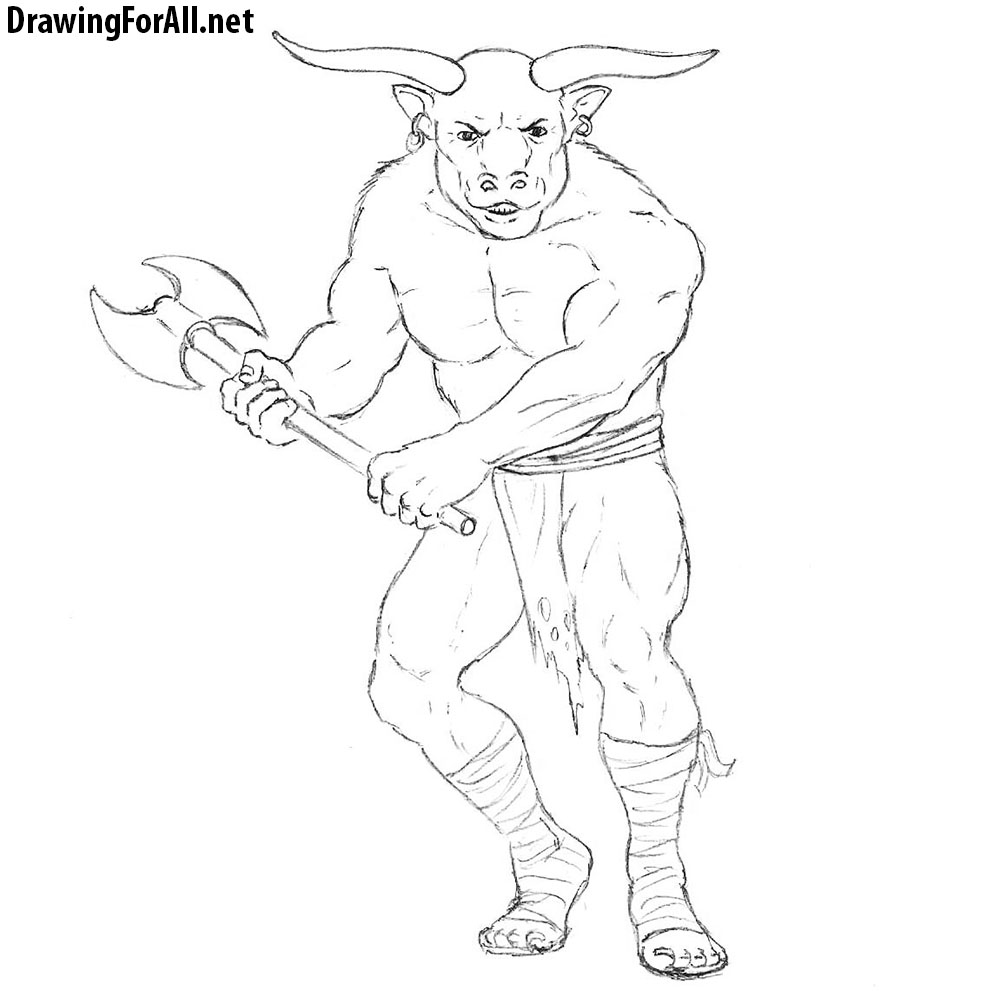 Here we add shadows. First, determine the source of light. The light in our example falls from the upper right side of us. So add shadows to the opposite side. With light lines sketch out the contours of the shadows. Then using hatching paint the shadows. Also draw the cast shadow.

Drawing lesson on how to draw minotaur came to an end. We make for you a huge amount of lessons on different subjects and with different complexity. And in the future you will find more interesting and informative lessons. So support us, share this lesson, subscribe to us in social networks and write your opinion in comments section below this article.