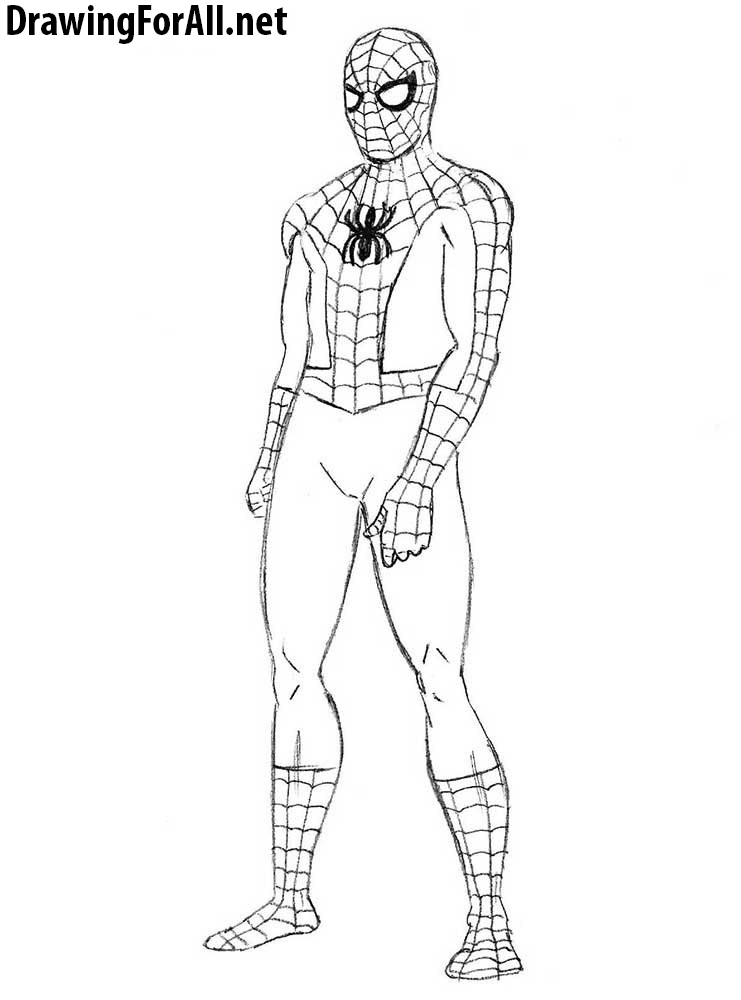 Peter Parker went back to our website, and so today’s lesson will be exactly about him. A feature of today’s lesson is a pose of Peter – as you can see, it is static. Previously we drew Spider-Man jumping or swinging on the web, today will be a superhero in a usual static posture.

Also of the features of the lesson may be noted that here are no shadows and complex muscles. So, we can say, that it is the easiest way to draw Spider-Man. Let’s start the lesson and learn how to draw Spiderman in a static posture!

First draw a stickman – man, made of lines and circles, which we needed to denote the basic proportions, posture and position of the hero on a sheet of paper. As we know, Peter Parker is an ordinary person who has acquired the abilities of spider after the spider bite in the laboratory of Norman Osborn. Peter gained incredible abilities, he was able to climb over the walls, he was endowed with spider agility and superhuman reflexes, but his appearance has not changed (except that it has become more athletic).

In fact, it is an ordinary person, so first we sketch out the outlines of the head, then the lines of the body. 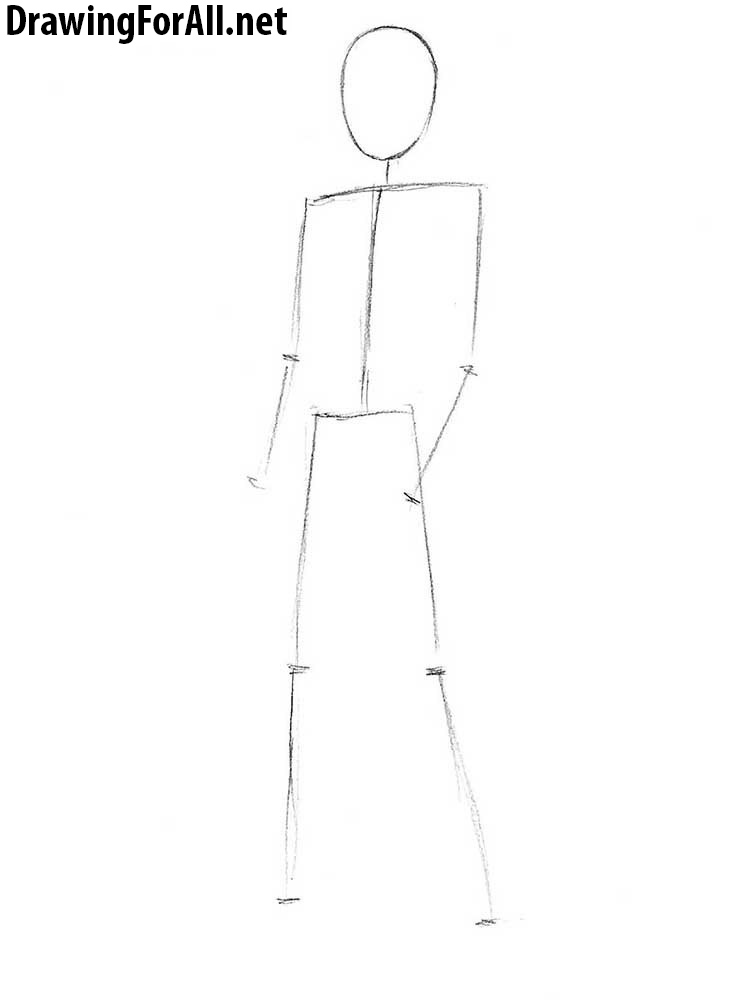 This step seems very voluminous, but it is not so. First, mark up the head with a couple of lines, vertical and horizontal. The vertical line shows the front of the symmetry and the horizontal shows the position of the eyes. Note, that the vertical line is shifted to the left relative to us.

Next, we outline silhouette of Spider-Man, representing the parts of his body in the form of simple geometric shapes. Then, draw a short cylinder neck. Just below draw the torso in a shape of rectangle. At the upper corners of the rectangle draw circles. In the future, these balls will be used to draw deltoids. Below the shoulders we draw elongated rectangles of upper arms, circles of elbows and slightly tapered rectangles of forearms. Also sketch out the hands.

Below the torso draw the groin in a shape triangle. From the sides of the triangle are draw two elongated cylinder, as guides for thighs. Note, they taper in the direction from the waist to the knees. Then draw the knees as circles and shins as tapered down cylinders. Sketch out the feet, and move to the third step. 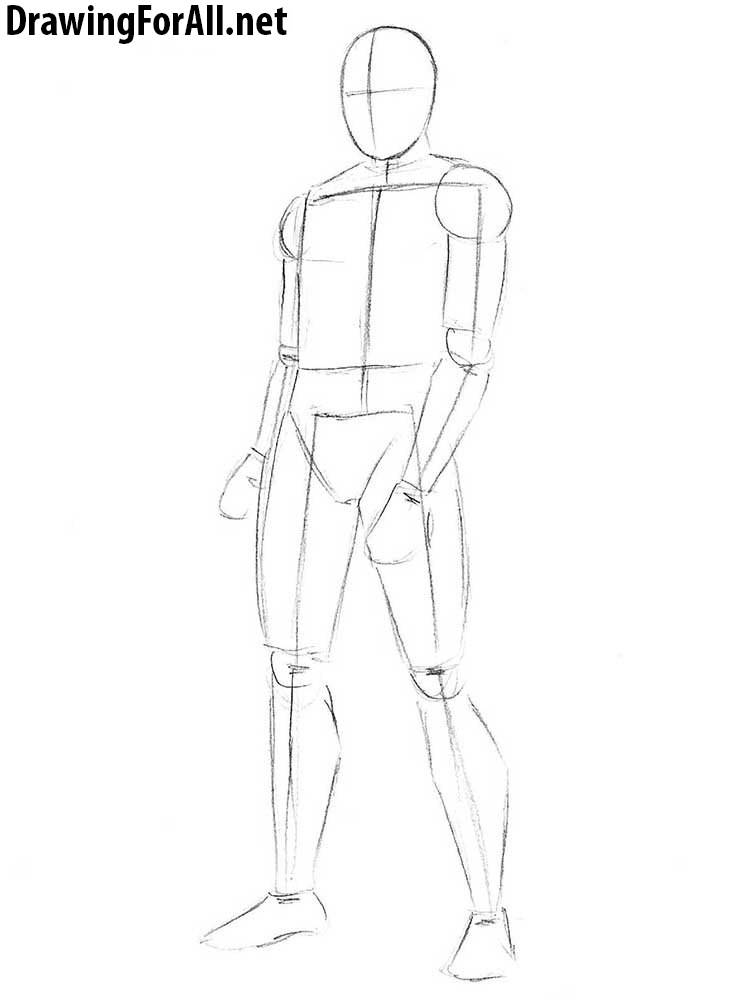 A pretty simple step in the and without that the easiest drawing tutorial about Spider-Man. Using the markup from the previous step, draw Spider-Man’s face, or rather, his mask. It is done in very simple way. First draw the well-known eyes of the Amazing Spider-Man. Note, that the eyes should be thicker at the sides than in the center of the face. Then circle the outlines of the head, giving it finished view. Also do not forget to erase the guidelines. 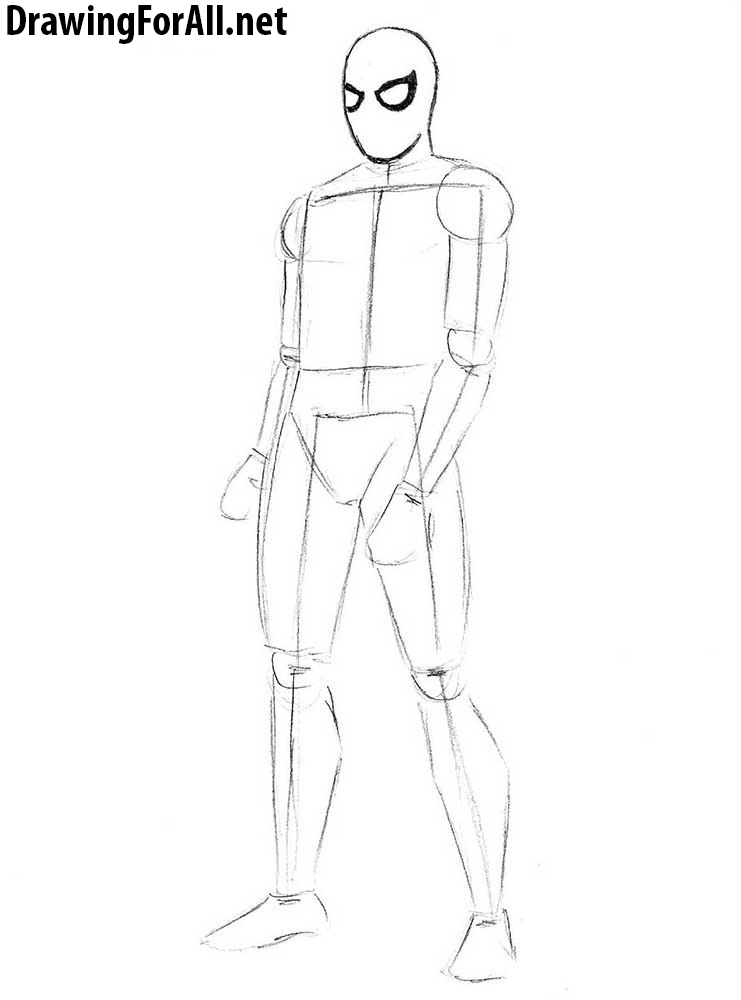 Now erase the extra lines from arms of Spider-Man, and will outline their contours. Do the same actions with the torso of SpiderMan. Pay attention to the arms – round shoulders go into the upper arms, which narrow in the elbow area, and then expand a little in the area of forearms and narrow at the wrist areas. 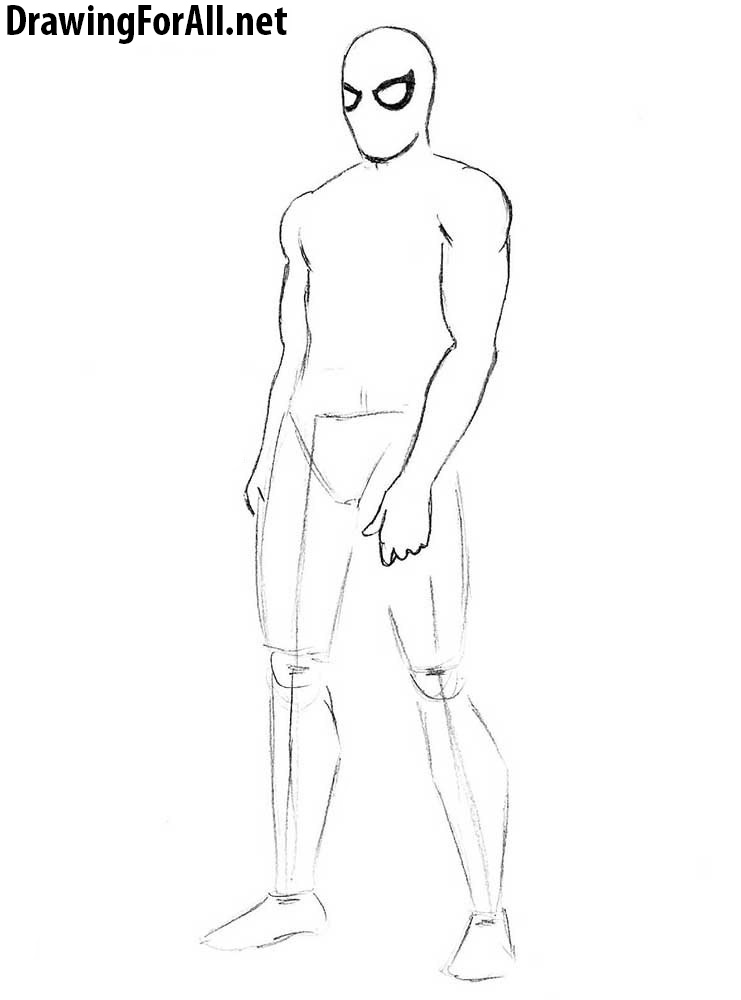 As we all remember, the costume of Spider-Man is made up of two colors – red and blue. So, here is the boundary separating these colors, we now have to draw it on the body of our hero. Here we erase extra lines from the groin area and circle this part of the body. 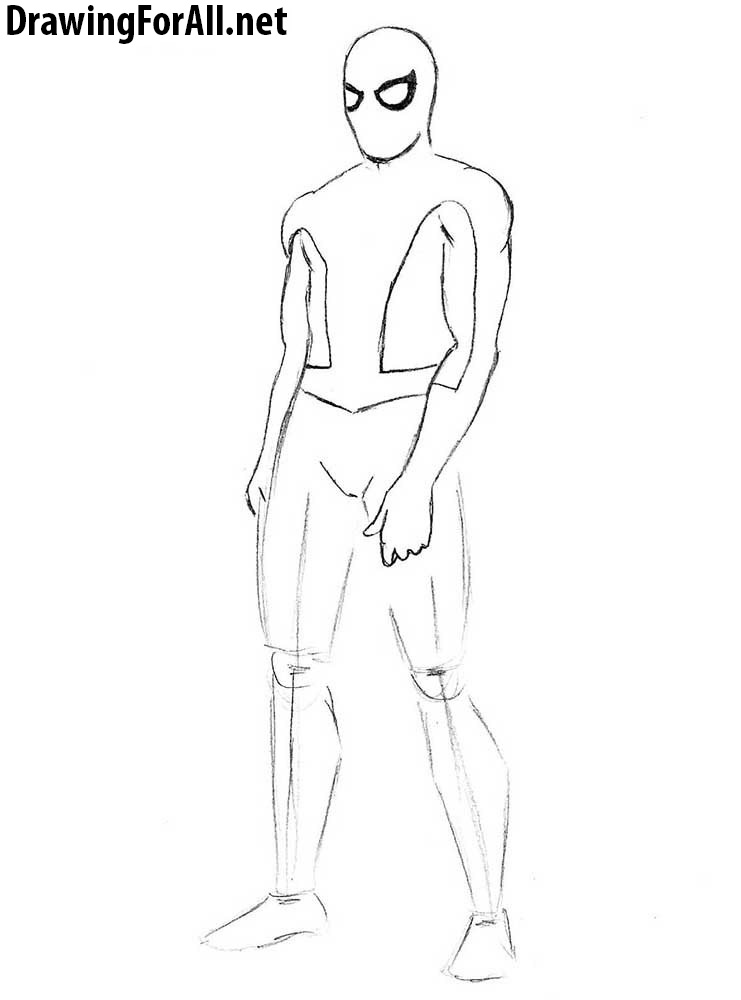 In this step we erase the extra guiding lines from the Spider-Man’s legs. Using very short lines denote the knee joints, then circle all external outlines. In the area of the lower leg, just above the conditional midpoint of the knee from the ankle, draw the border of red and blue parts of the costume. 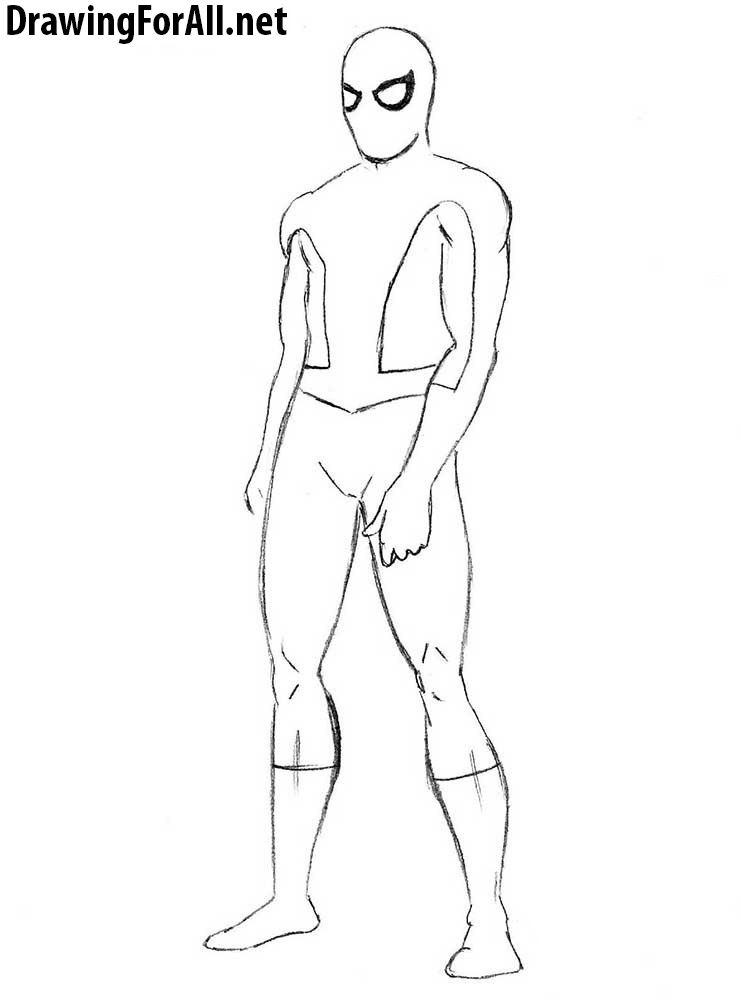 The figure of Spider-Man is completely outlined, now is the time to do a pattern on his costume. First draw longitudinal, ie, vertical stripes. They seem to come from the notional point between the eyes and disperse throughout the body. Note, that these lines must be curved in accordance with the curves of the body of Spider-Man 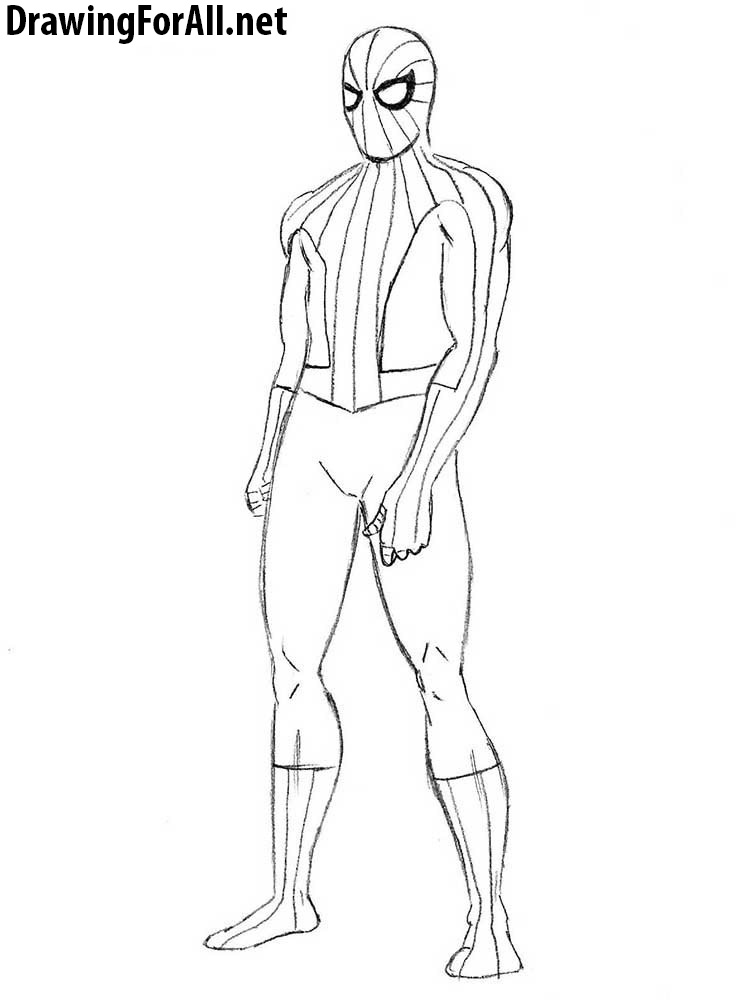 We finish our lesson drawing drawing the horizontal part of the pattern. Note that these lines also come from a conditional center between the eyes of Spider-Man. At the end of this step and the whole lesson draw the sign of the Spider-Man. 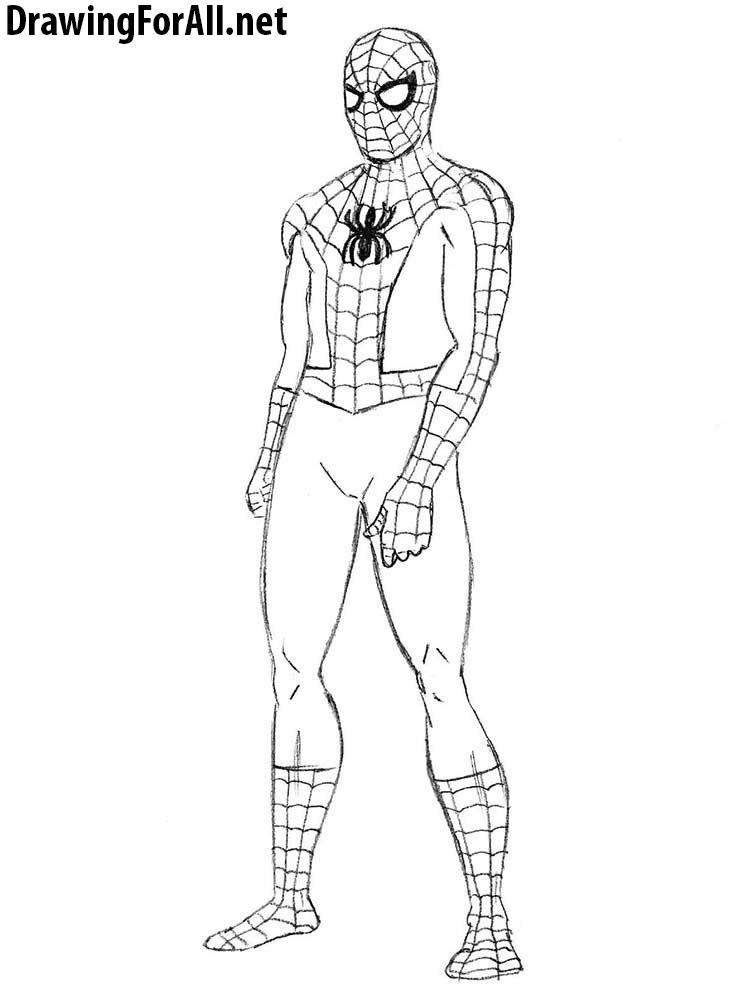 We hope that this drawing lesson was simple for you. In general, it was very simple, with the exception of the first two stages, which was drawn stickman and applied the rules of construction of the human figure. Generally, in the early stages, regardless of the fact that we are drawing, you must be especially careful, because the mistakes made there, will be very hard to fix. And of course, don’t forget to share this lesson with your friends and subscribe to us in Facebook, Google Plus, Pinterest and other social networks.