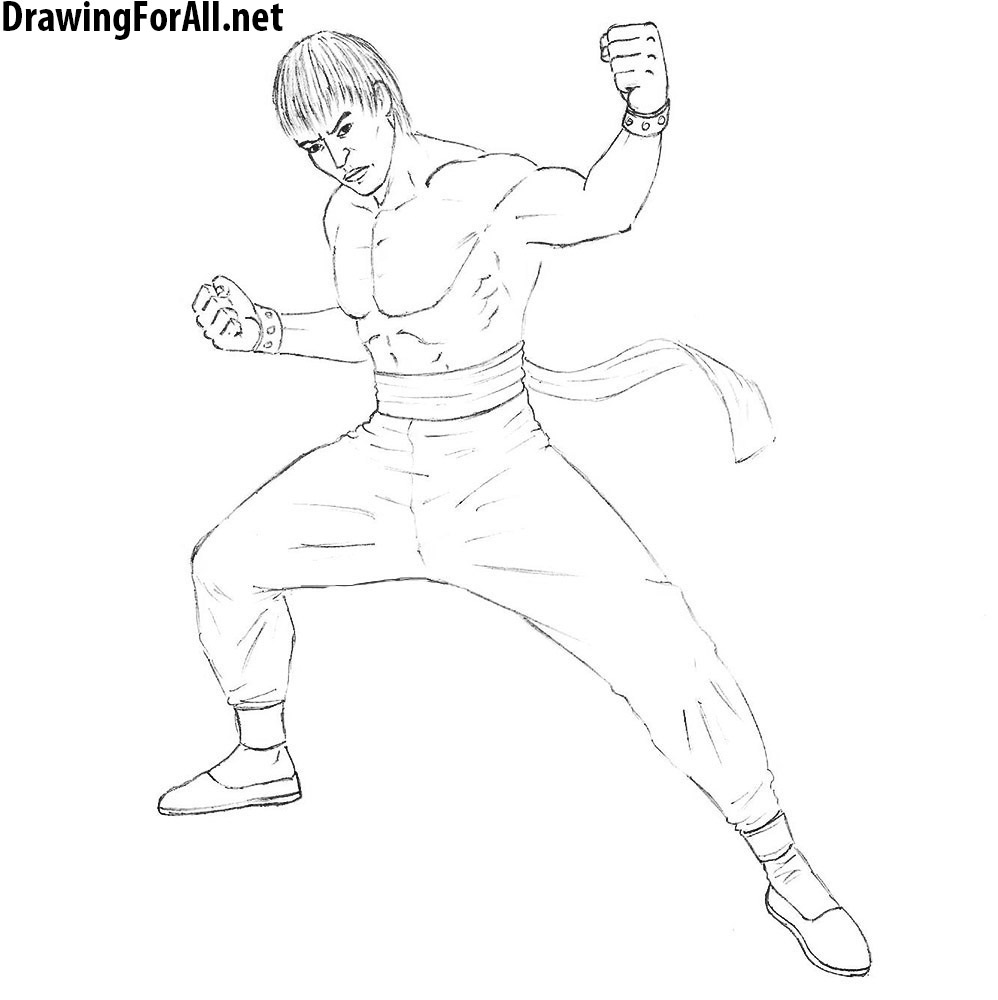 We love games in genre of fightings, we hope you too.

In previous lessons we have drawn such characters as Gon and Kazuya Mishima.Today we are going to draw one of the classic characters from the fighting games – Marshall Law.

Marshall Law is really very similar to Bruce Lee – look at the hairstyle of Law and one of his suits, which opens in the game for him, namely, yellow trousers with black stripes. So, let’s start the lesson on how to draw Marshall Law.

We have a drawing tutorial on how to draw a karateka, and so, the first two steps of the lesson today is almost completely repeat the two steps of the lesson about karate fighter. So, at first we draw the head of Marshall Law, then sketch out the lines of the body. We want to recall, that this step we draw in order to outline the proportions and pose of the character. 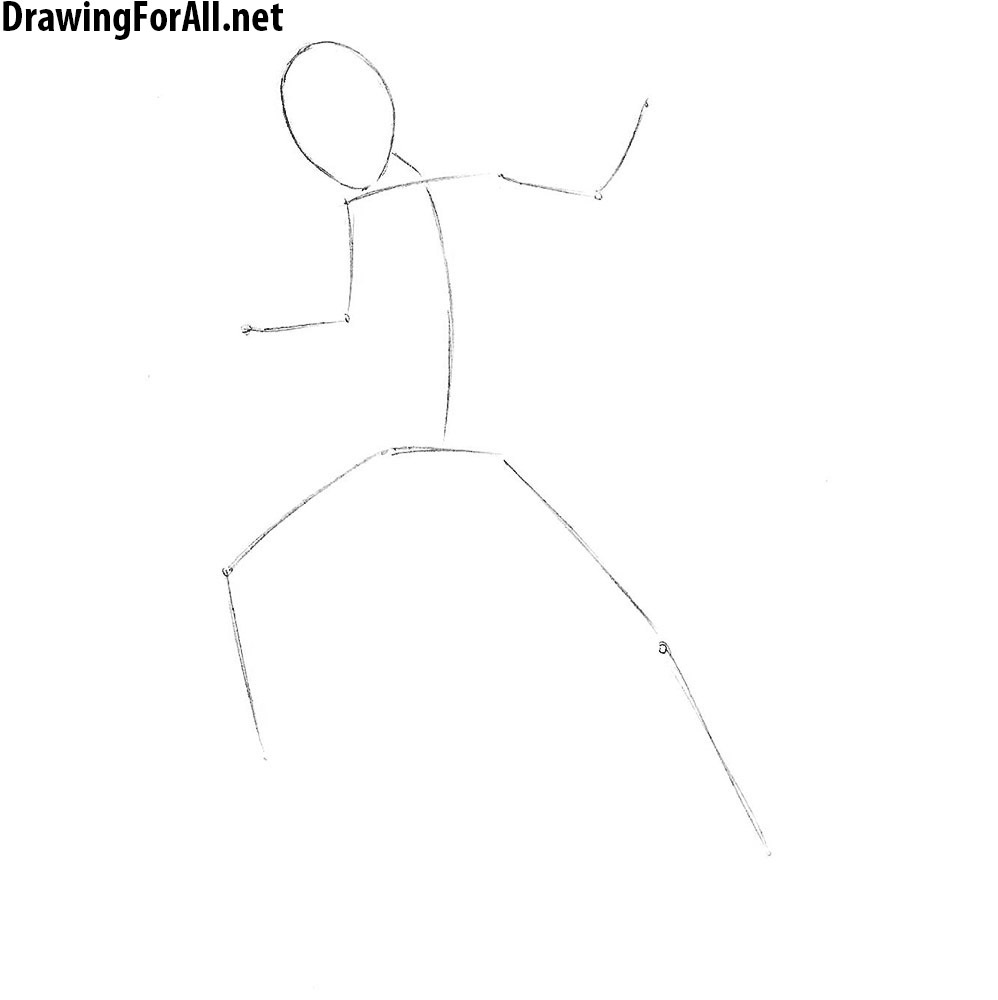 As in every other drawing lesson in the second step we will add volume to the character. But first we sketch out the guidelines on the head of the Marshall Law – vertical line of the symmetry and horizontal line eyes. 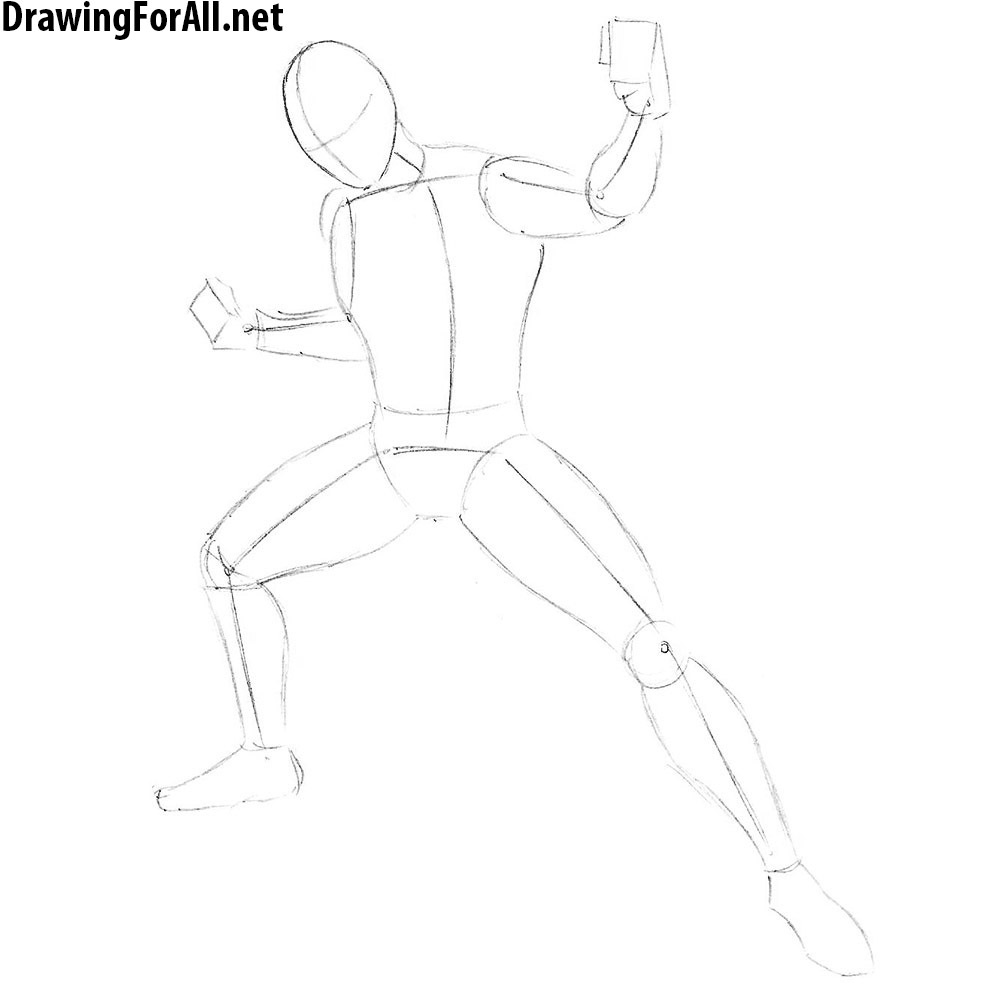 Using facial markings from the previous step we outline the eyes, nose, mouth and ears. Then sketch out the outlines of the hair. Using short lines draw the lower part of the hairstyle of the Law. The hair we shall draw in the direction from the roots to the ends. 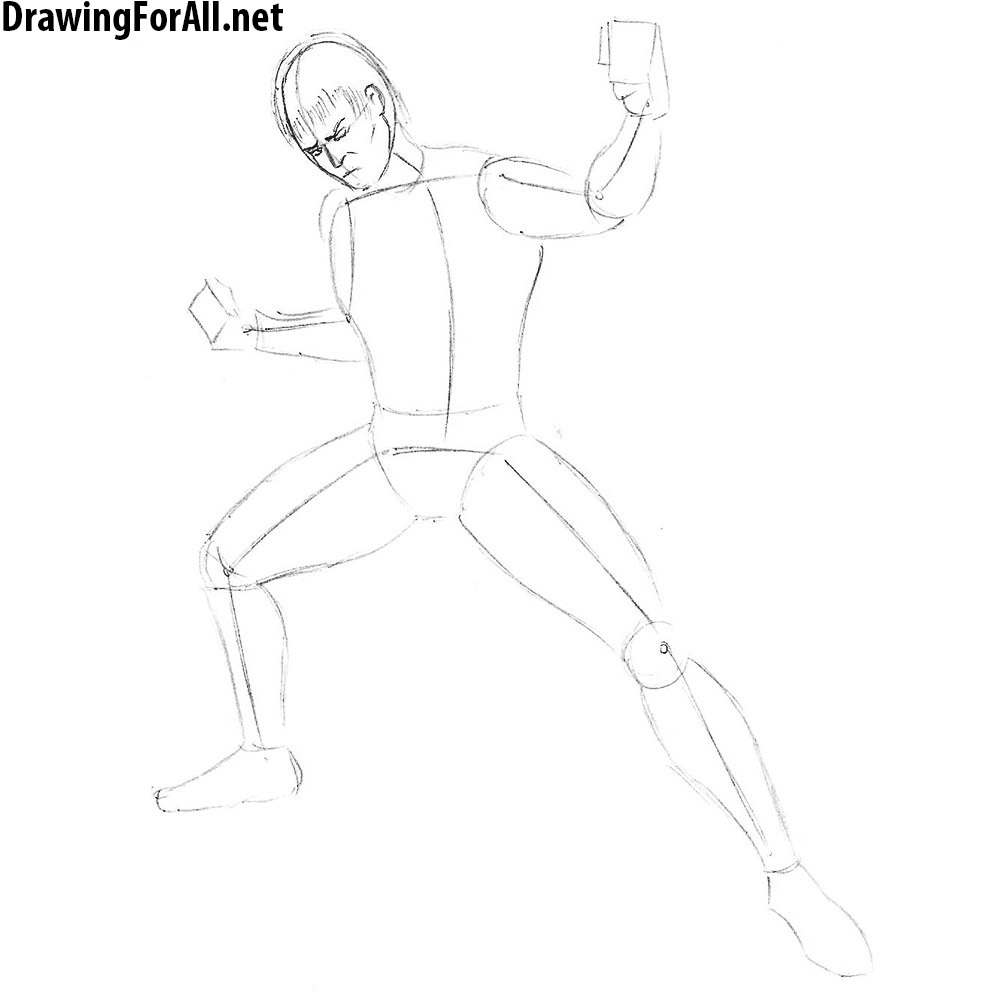 Here we draw the face of Marshall Law. First we finish drawing hairstyle (in the same direction as the last stage), then draw the pupils (look at their location), circle the nose and draw the lips. Make sure, that face of the character was like to our example. Finish this step by drawing some wrinkles on the face. 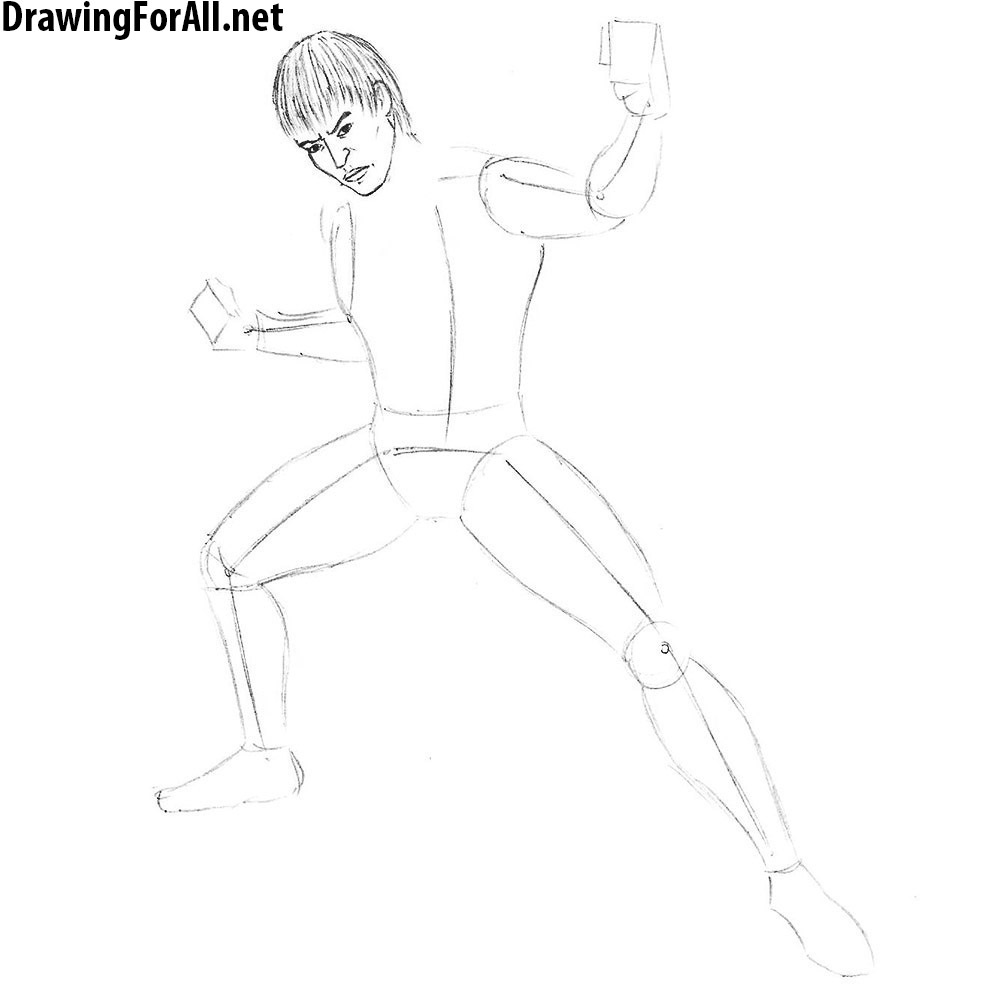 The head is ready, it’s time to start working with the body. In this step, using the guidelines from the previous steps, we will draw the core muscles of the torso. The largest – pectorals, look like two powerful plates.

The upper contours of these plates are formed by horizontal lines of the clavicle, over which draw the lines of the muscles of the neck.

Below the pectorals draw the abdominals and obliques. 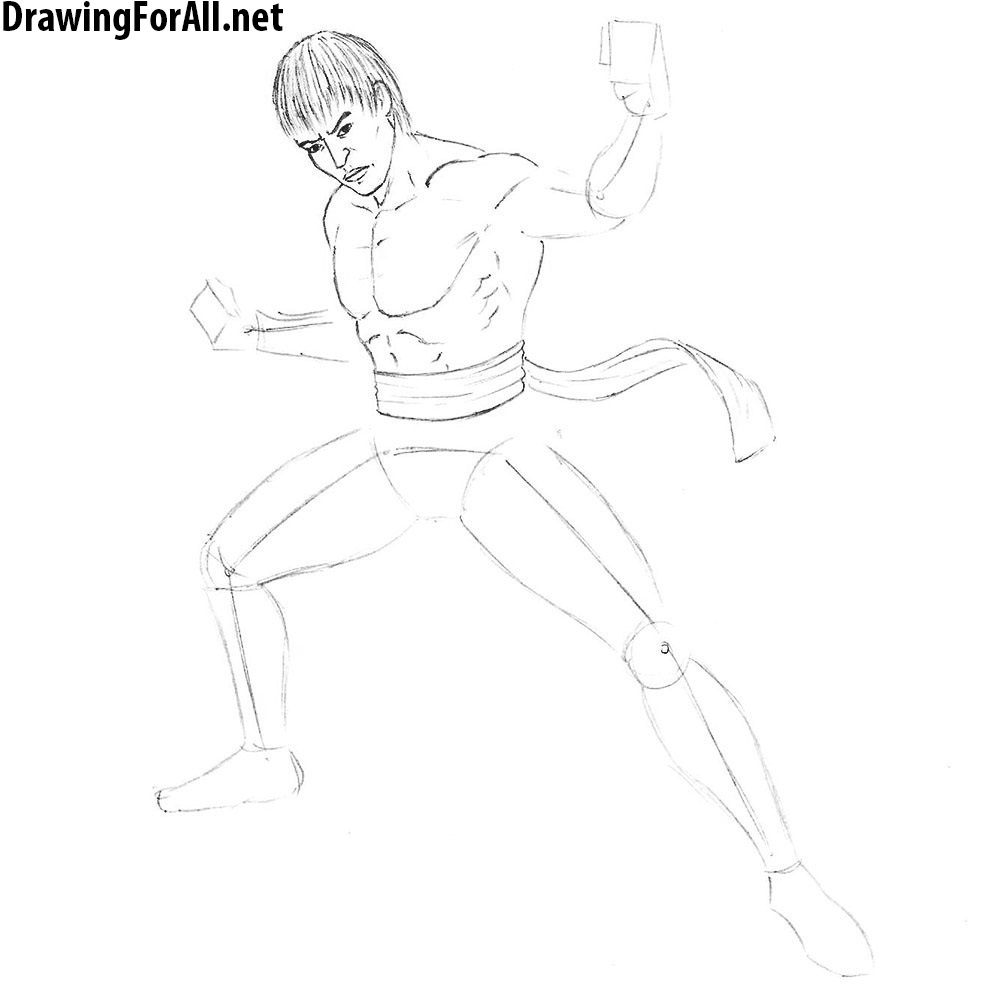 In this step we draw the arms of Marshall Law. We attach them smooth, natural contours and erase corners. First we draw the lines of the muscles of the deltoids, then do the same actions with the biceps and forearms.

Draw the hands, clenched in fists. Try to repeat the position of the knuckles. And don’t forget to draw the bracers. 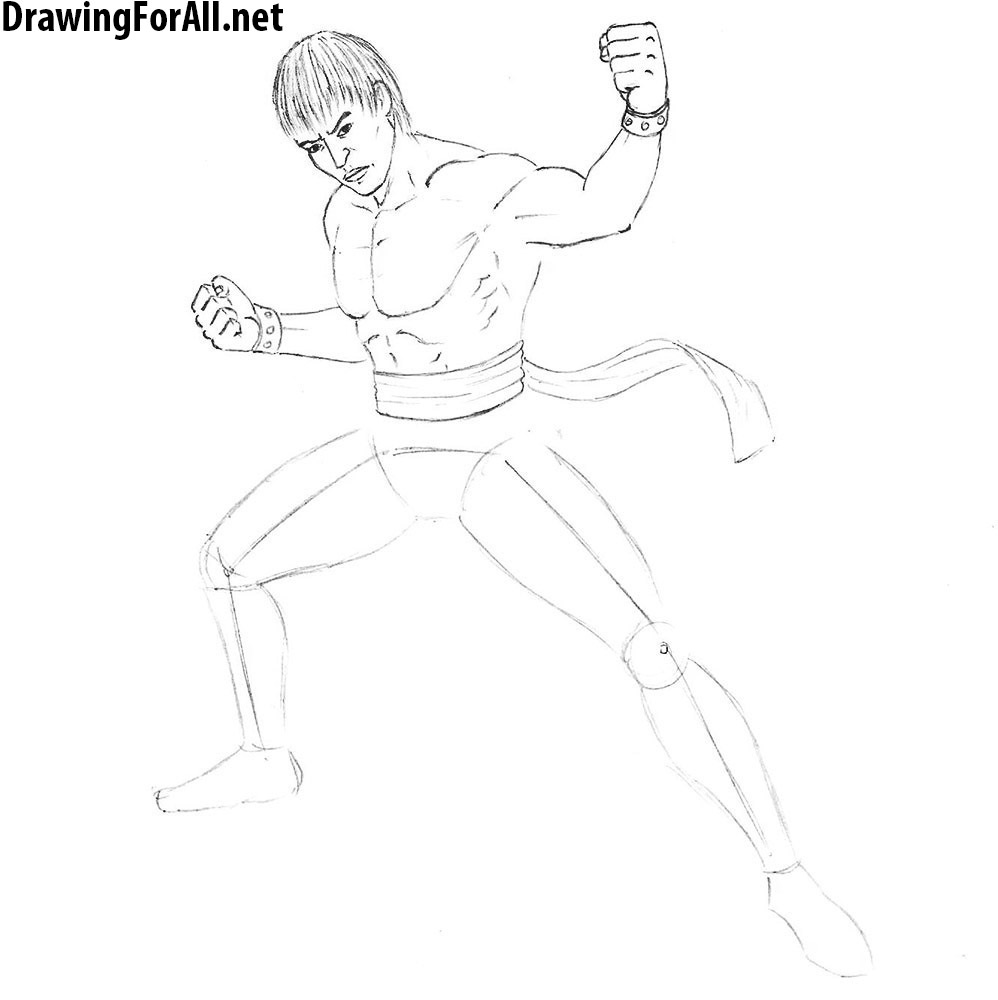 We have reached the penultimate step of the drawing tutorial on how to draw Marshall Law from Tekken. Here we outline the contours of the pants over the legs.

As you can see, they are very spacious top (when you draw the pants, be guided by the contours of the legs). Also note, that the pants are narrowing in direction of the feet. 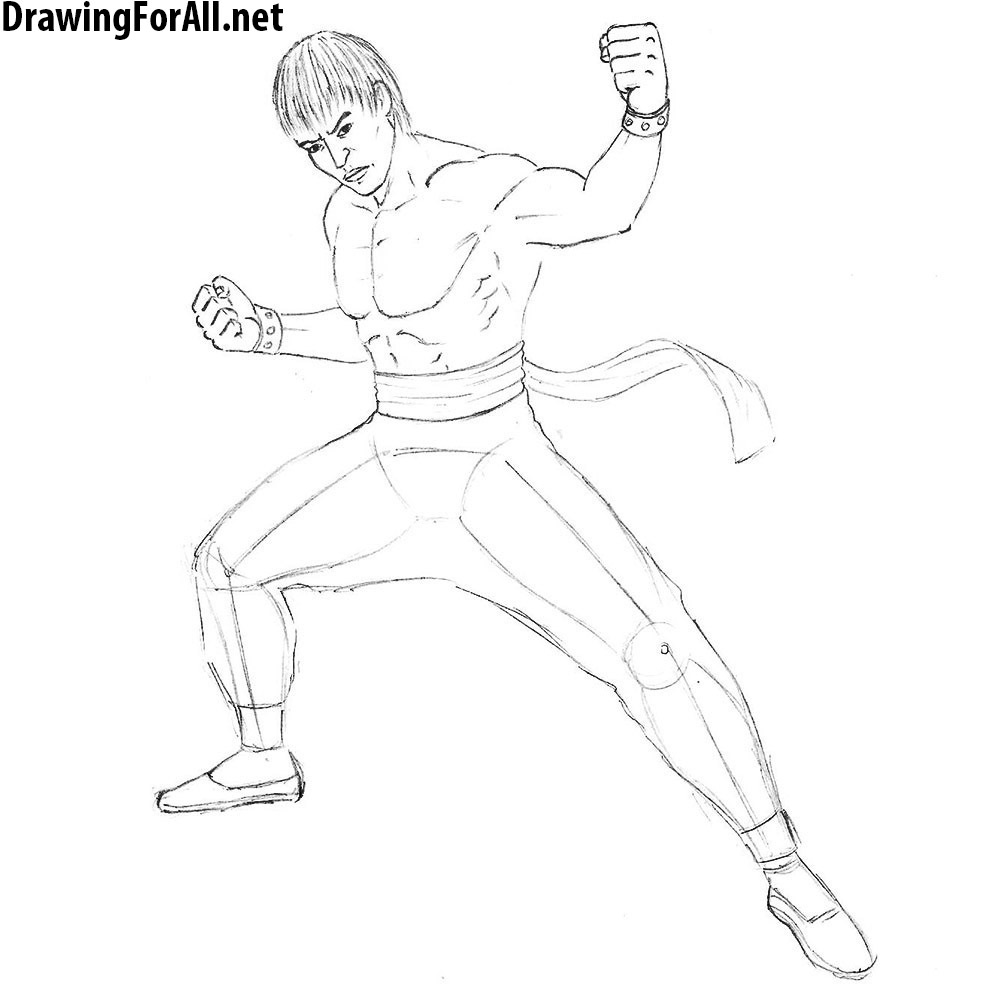 In the final stage circle the pants and shoes. Sketch out the folds on the pants, that located mostly in the areas of hips, groin, knees and ankles. Add seams to the pants and draw the sole of the shoes. And if you did everything correctly, your Marshall Law will have to look something like this: 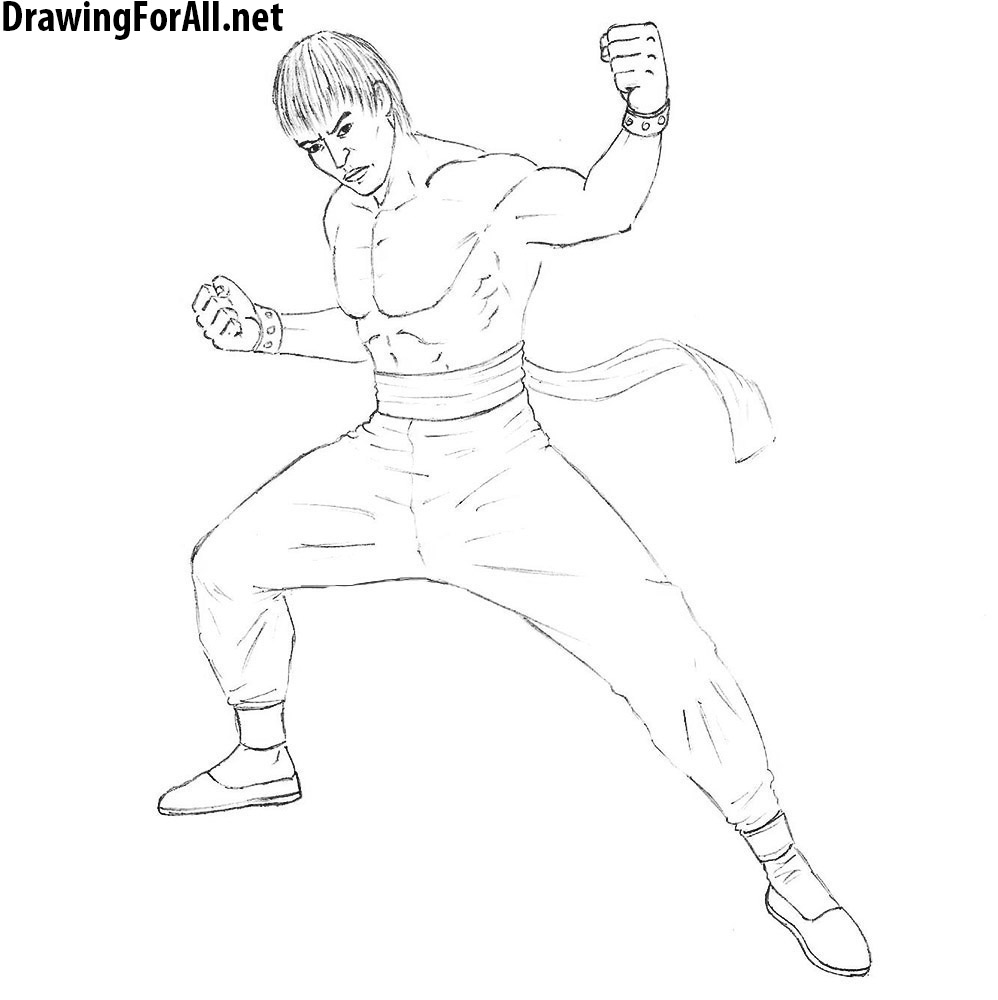 We hope that anyone who wanted to learn how to draw Tekken, more precisely, main characters of this fighting game, will like our drawing lesson. Do not forget to find us in Facebook, Google Plus and other social networks, where you will find are a lot of artifacts, announcements of lessons and other interesting things!