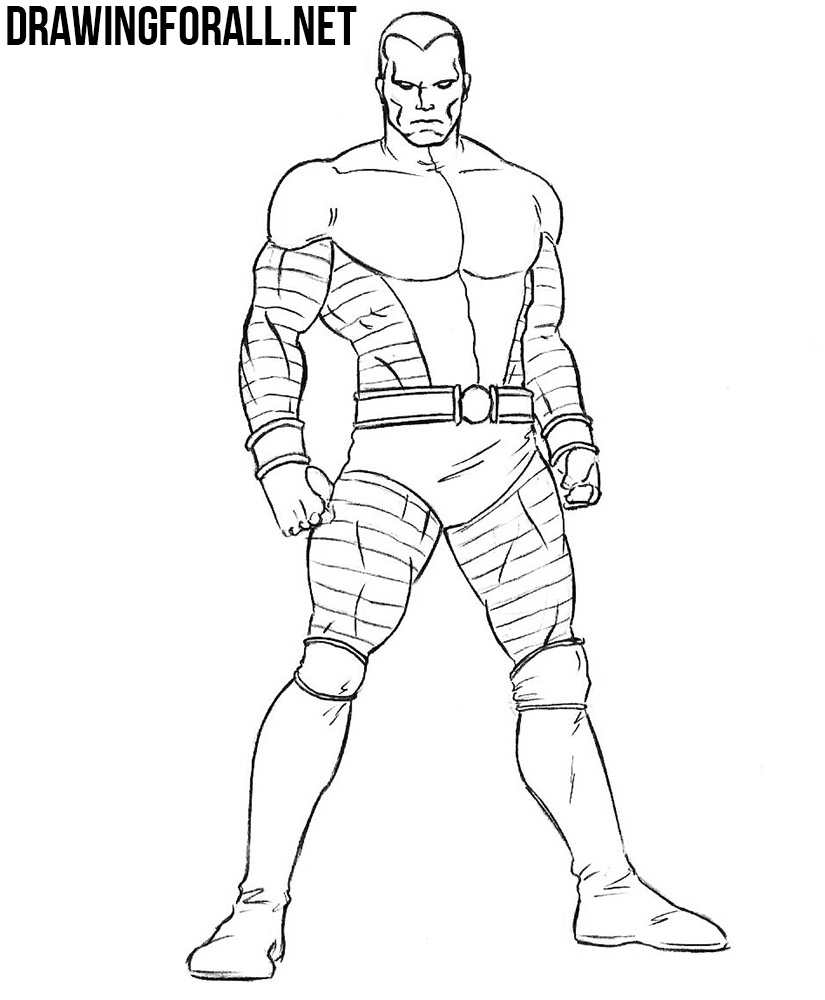 Hello everybody and welcome to the drawing tutorial in which we will show you how to draw Colossus from X-Men. As you know, this is a superhero of the Marvel Comics universe. A Russian mutant, a member of the X-Men, and so far the strongest of them is physically.

So, despite the fact that our today’s superhero is a mutant, he has a skeleton of an ordinary man. As always, we start with the head, drawing it in the form of an oval. Next, draw the spine with a simple line. Then sketch out the chest and pelvis. At the end of the step we draw the arms and legs with simple lines. 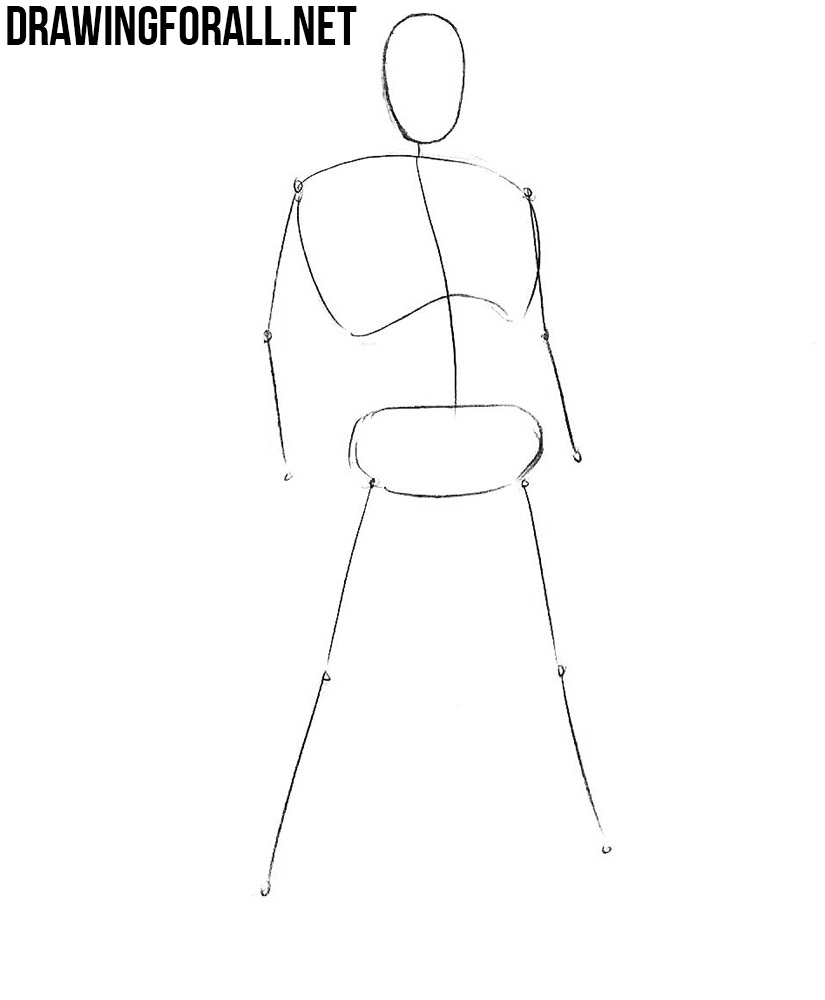 Let’s add some “flesh” to our iron bogatyr. First thing first we draw the lines of facial symmetry. Next, outline the neck and torso, which narrows in the waist area. After that we draw arms with simple geometric shapes. Next go down a bit and sketch out the pelvis and legs. 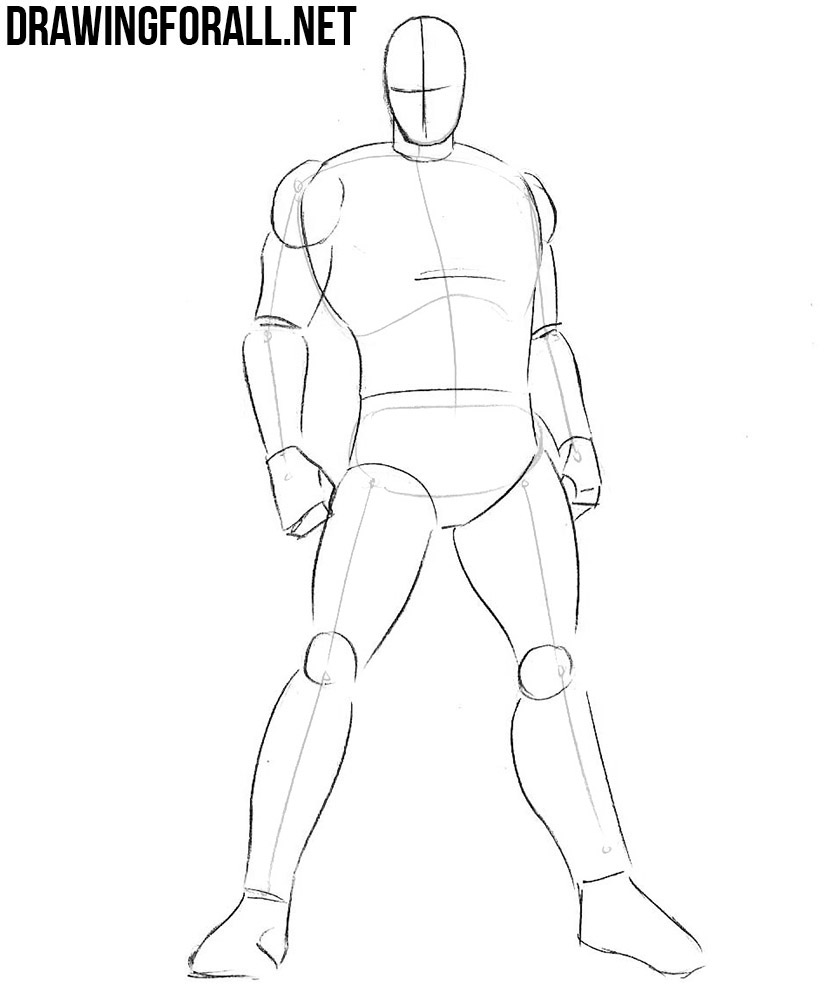 Let’s start working with the details, or rather with the face of our Colossus. On the horizontal line from the last step we draw frowning eyes. A little below draw the nose on the vertical line and the mouth, which is exactly in the middle between the tip of the nose and the line of the chin. 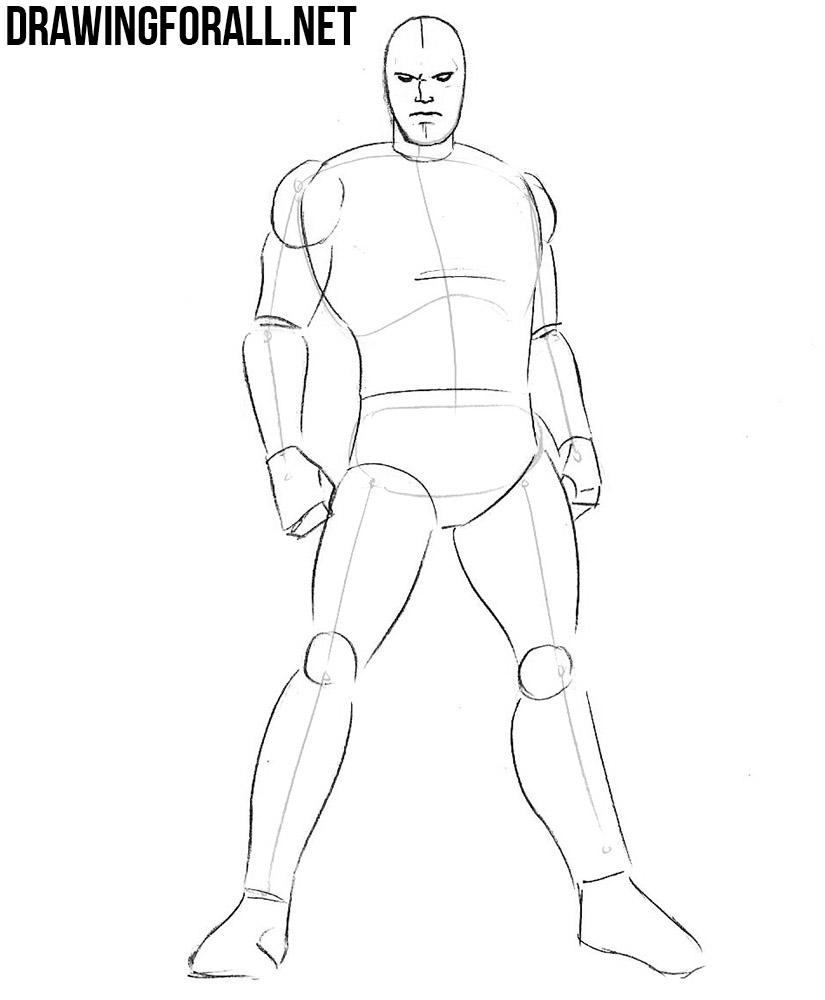 In this step we will finish drawing the head of our Colossus. Draw the outlines of the head, forming the line of the skull, cheekbones and chin. Next, draw a line of hair and ears. Add wrinkles on the face as in our example
and move to the next step. 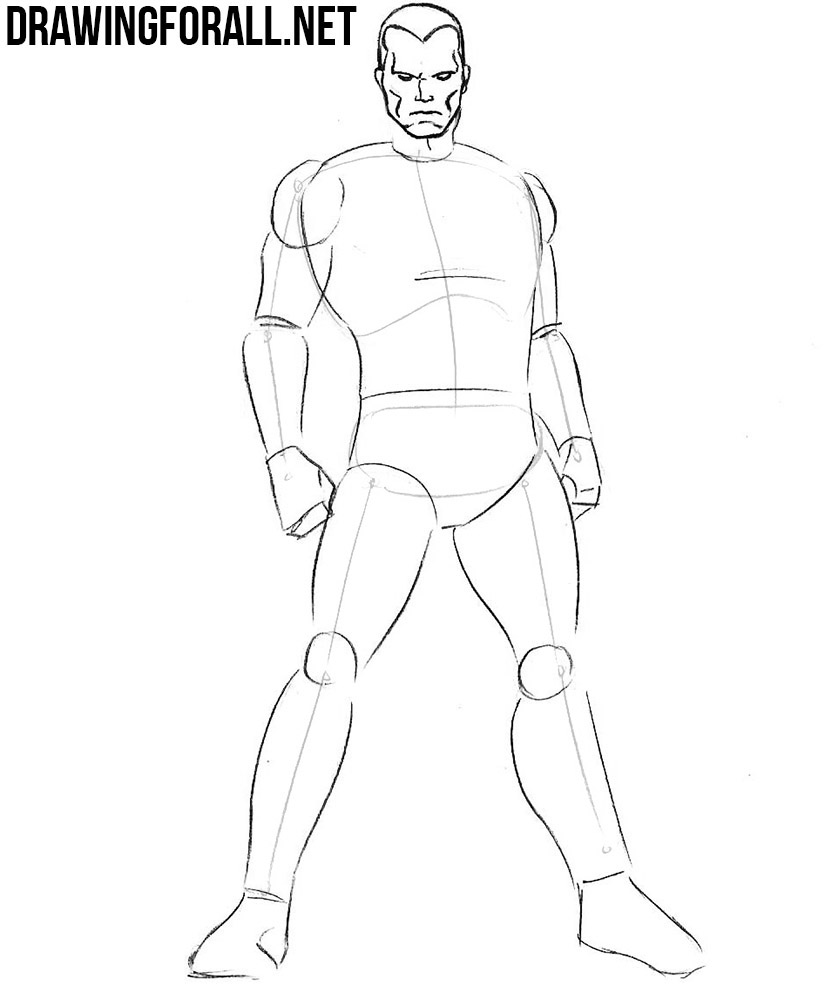 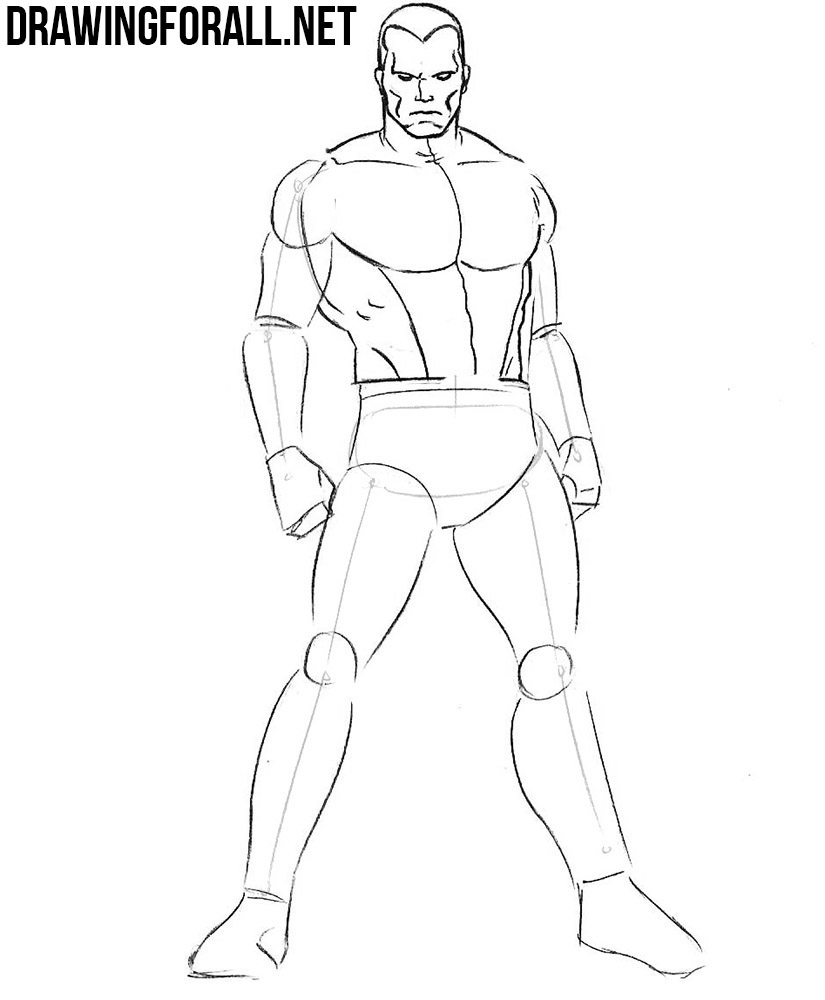 In the penultimate step of the lesson on how to draw Colossus we draw the lower part of the body. As well as in the previous step we draw out the lines of the legs and muscles on the legs erasing all remaining guidelines. In the same step draw out the boots and wrinkles on the shorts and boots. 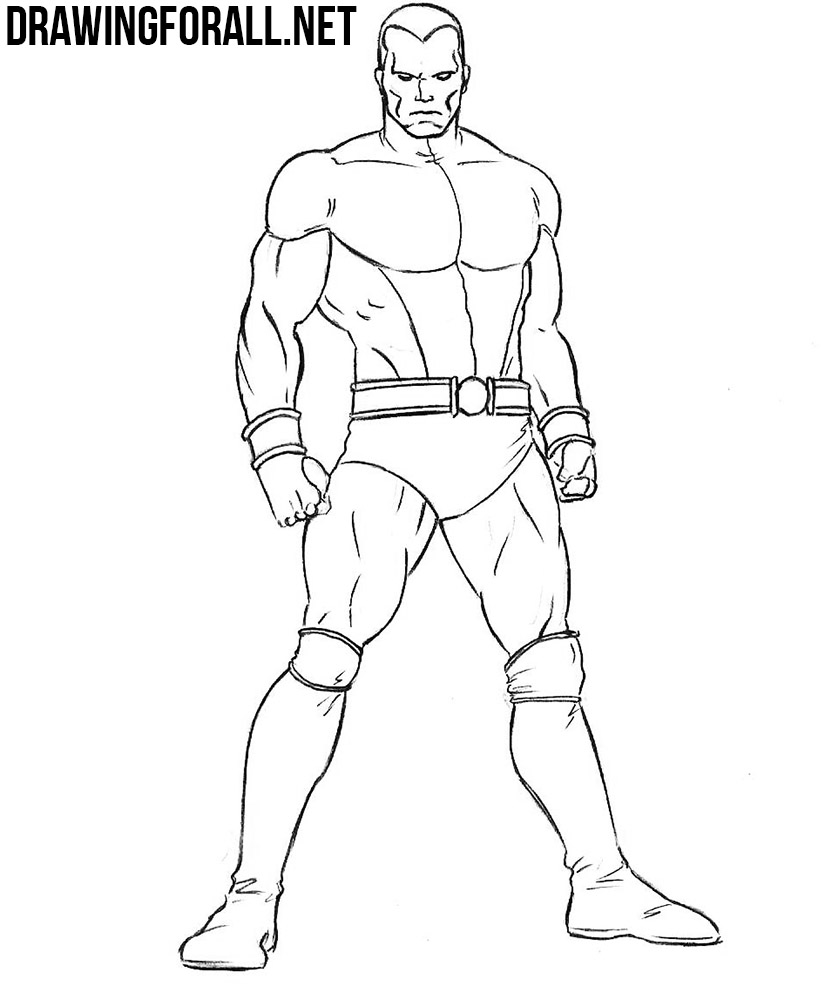 So we reached the last step of the lesson on how to draw Colossus from X-Men. This is a very simple step in which we simply draw transverse lines on open areas of the body.

Do not forget that we have a whole category with drawing lessons about comics, where you will find characters such as Spider-Man, Wolverine, Cyclops and many others.