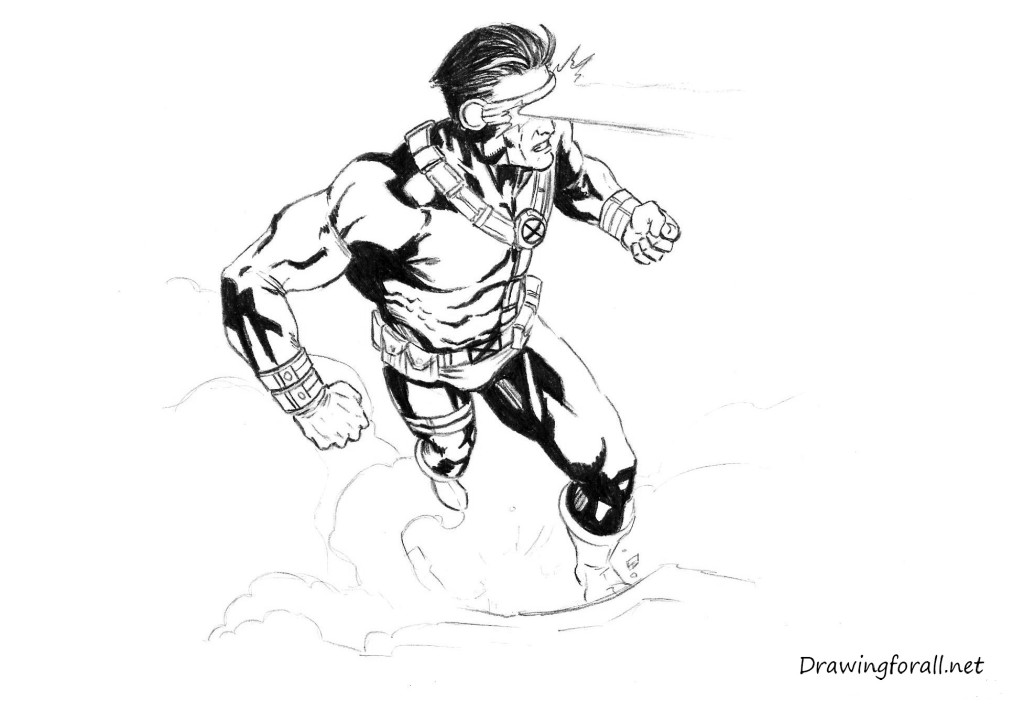 Hello! Today, the main hero of our drawing class will be the team leader of the X-Men, Cyclops. “Cyclops” is a nickname, the actually name of this character is Scott Summers. Cyclops is a wise and discreet man. It is the Cyclops comes up with different action plans and tactics for the whole team X-Men.

Cyclops have a lot of respect among the X-Men members, the only person he has occasional quarrel is Wolverine. But today we will talk about how to draw Cyclops. So, let’s start the tutorial!

Draw a stickman figure of our hero. Note that in this drawing lesson we are dealing with a very unusual angle. This perspective greatly distorts the proportions in the early stages. Using an oval draw the head. Using simple lines draw torso, hands and legs. Note, that in this step you should not press down too hard on a pencil. 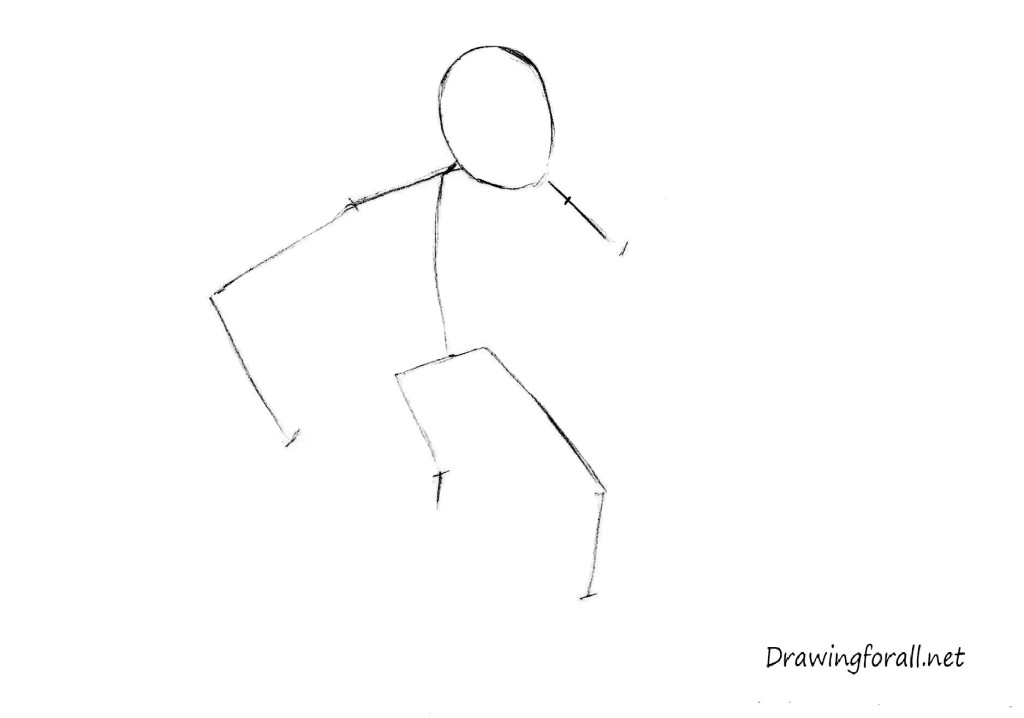 Start to add volume to the body of Cyclops. First sketch out the outlines of the body (upper part). Hands are very powerful and large, especially shoulders, that look like circles. Don’t forget to draw the guidelines of the face of our hero which show the location of : 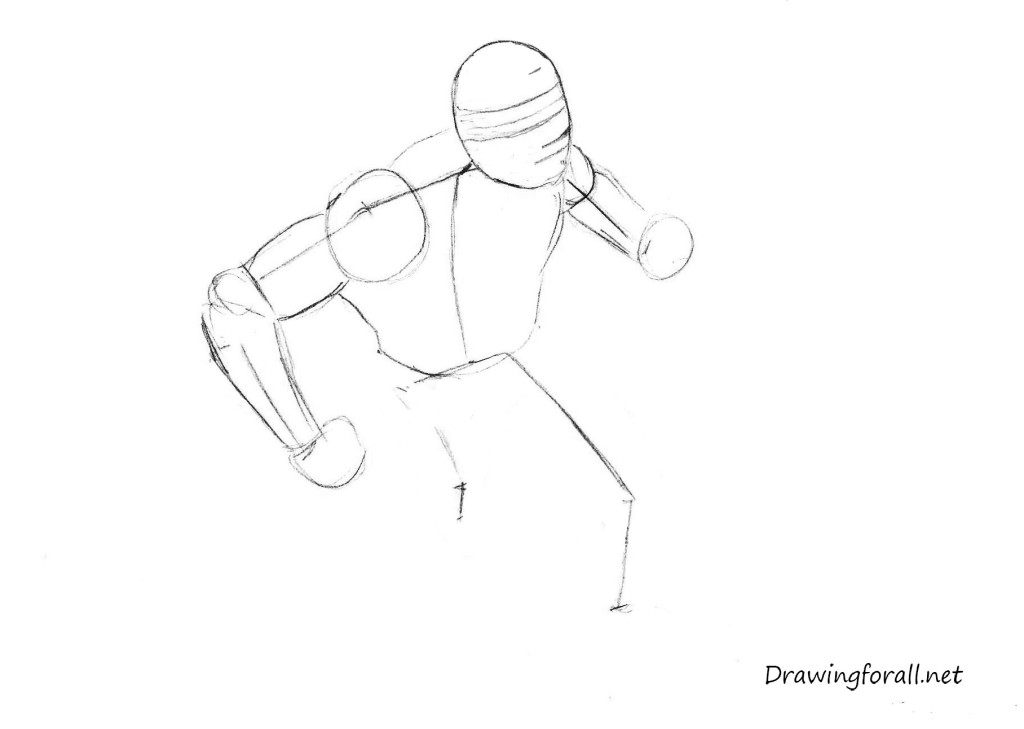 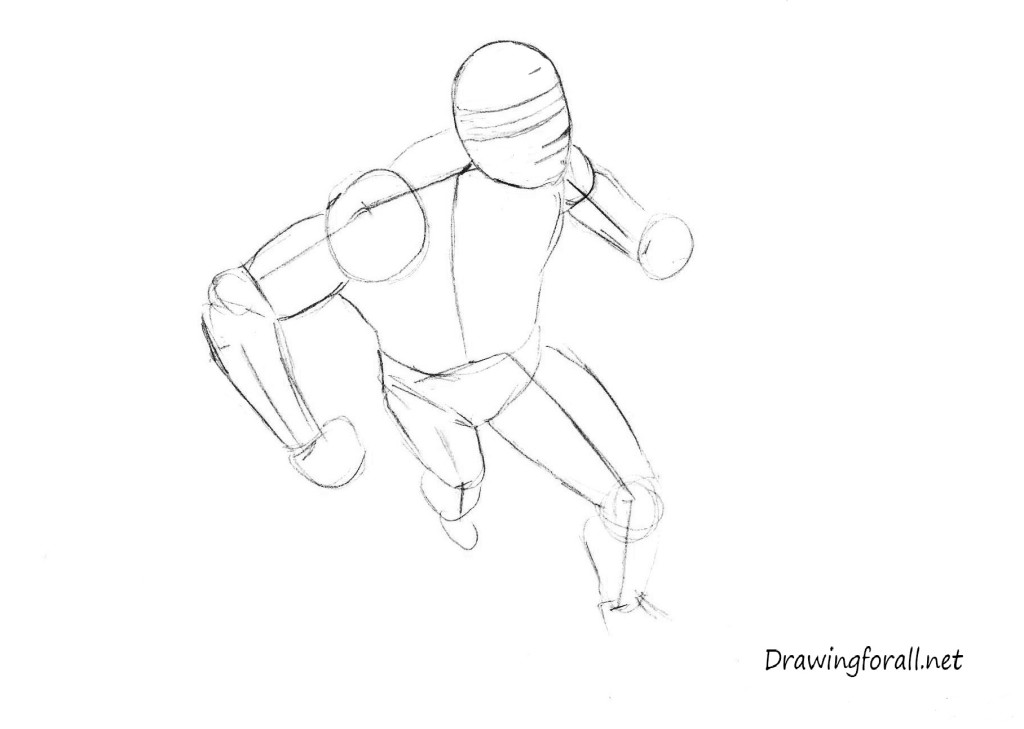 Using the lines from the second step, we will draw the details of the face of Cyclops. Note, that hair should be drawn from the roots to the tips. Don’t forget to draw nasolabial fold. 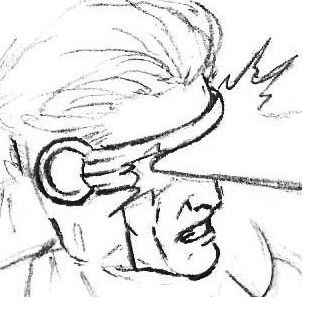 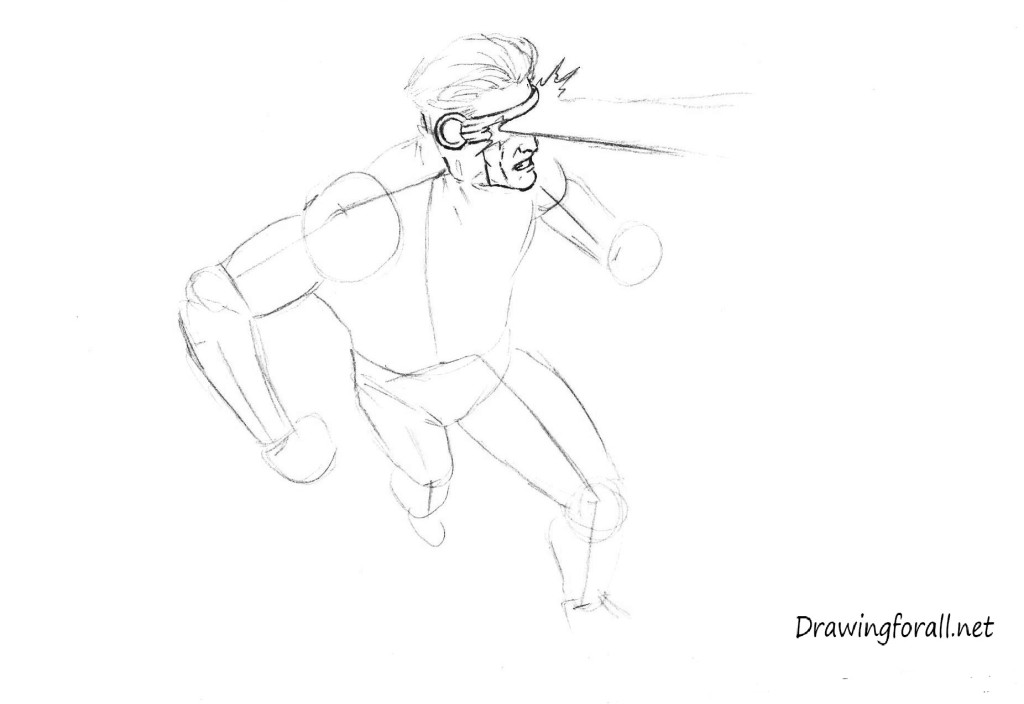 In this step, draw the Cyclops neck, clavicle area and the main part of the torso. 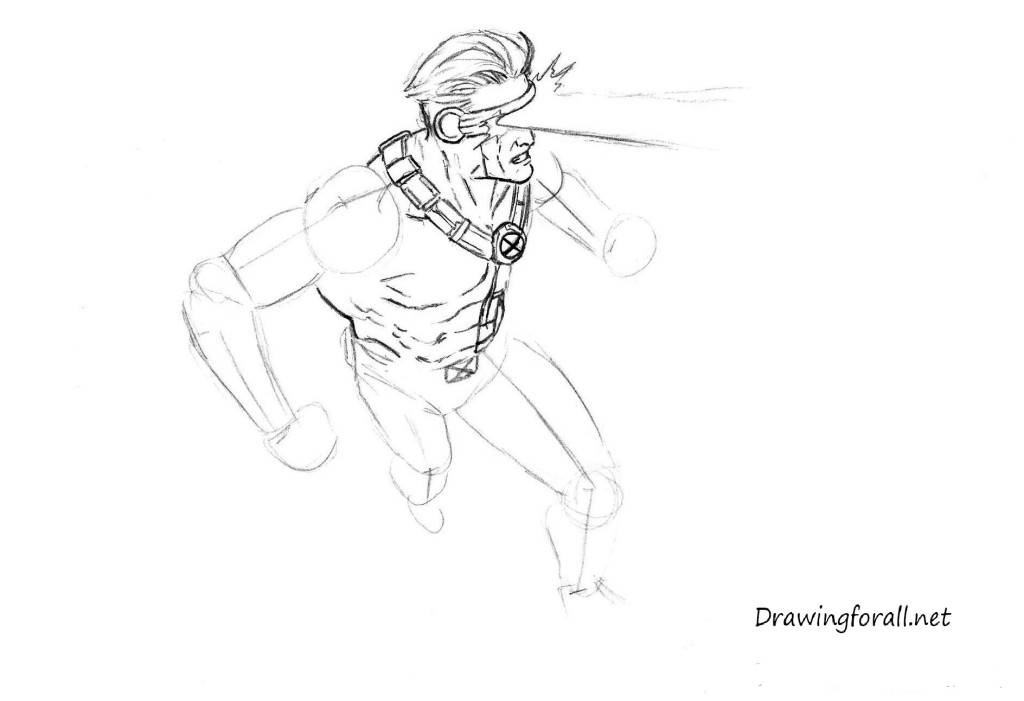 Now draw the right hand of the Cyclops. Here it is necessary to focus on the lines from the second step. To make it easier, to draw a fist, we decided to make the big plan: 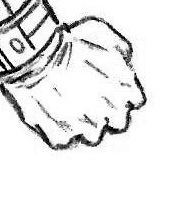 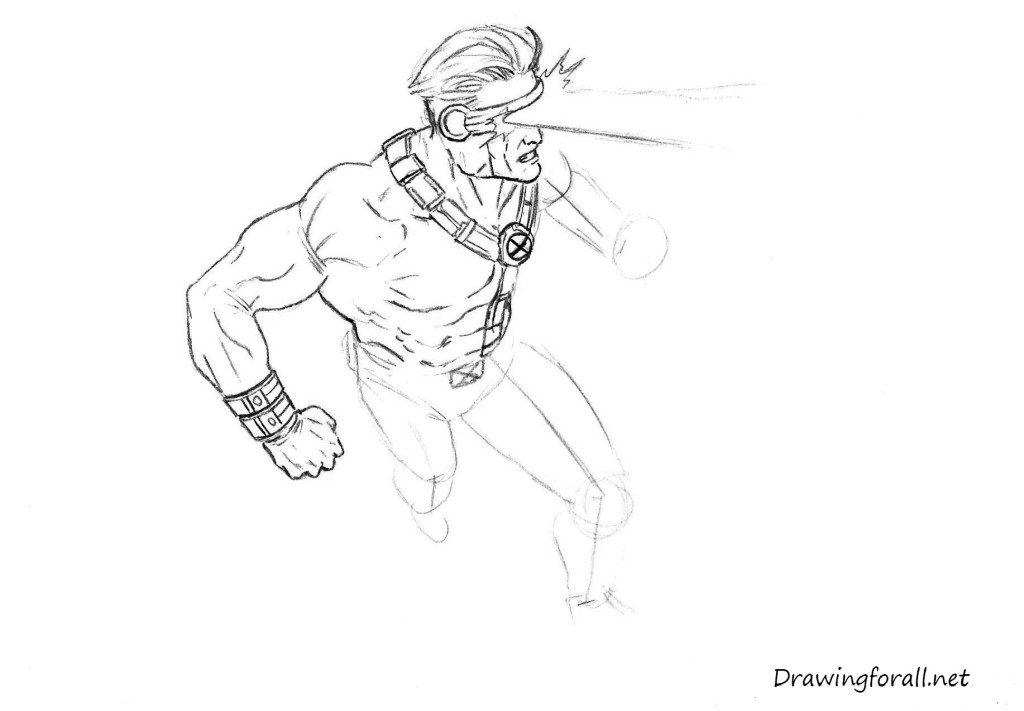 Draw the left arm. The wrist is one of the most moving parts of the human body, it is difficult to draw and therefore we again took it to the big plan: 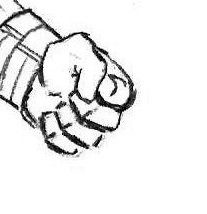 And look at this general plan: 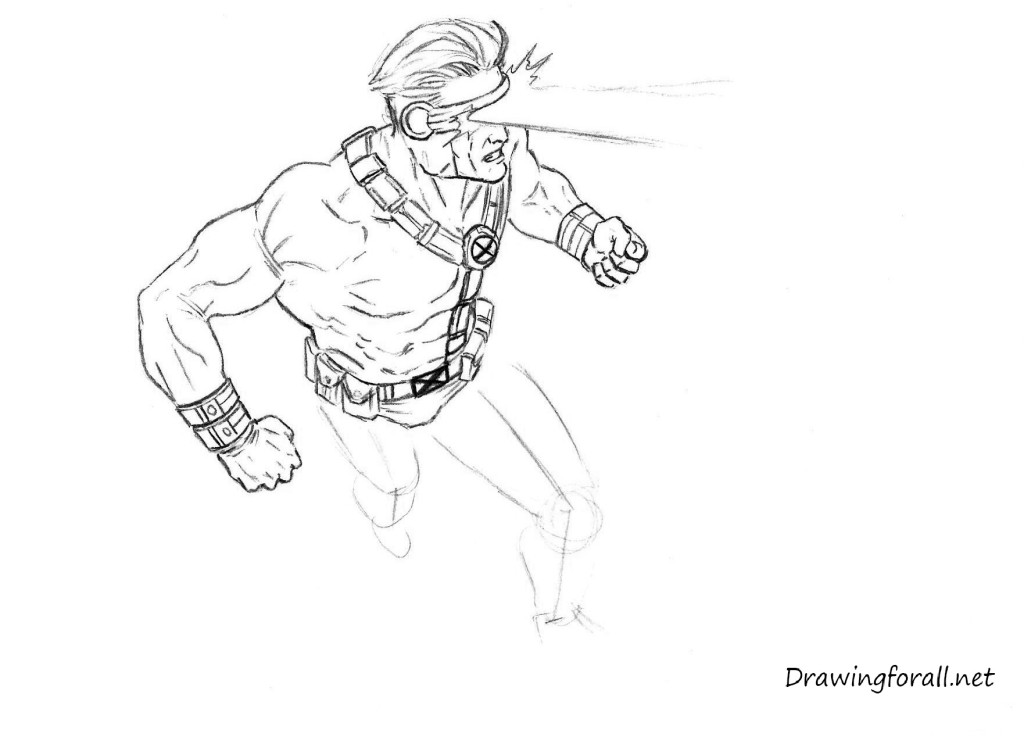 Draw out the outline of the legs. Draw the boots and straps on the left leg from us. Also in this step, draw the smoke. 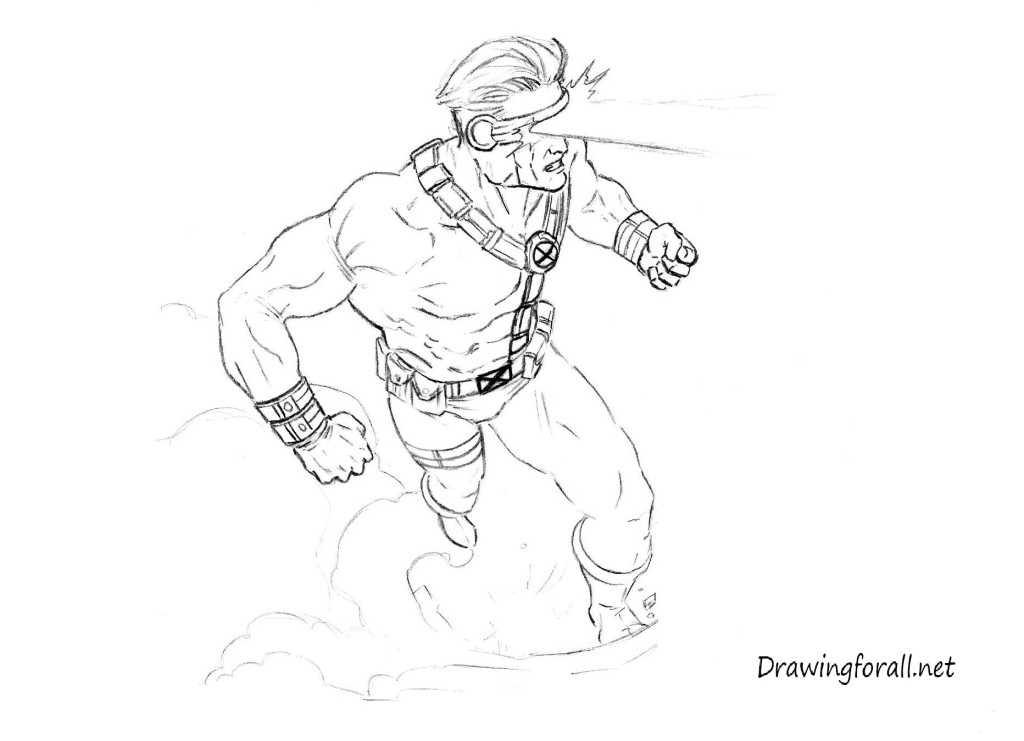 Lesson on how to draw Cyclops from X-Men, concludes the work with the shadows. Shadows overlap here also, as in the drawing lesson Iron Man.

It was a good work – in this drawing tutorial we have a really difficult perspective and proportions. We’ll see you next week. Goodbye!