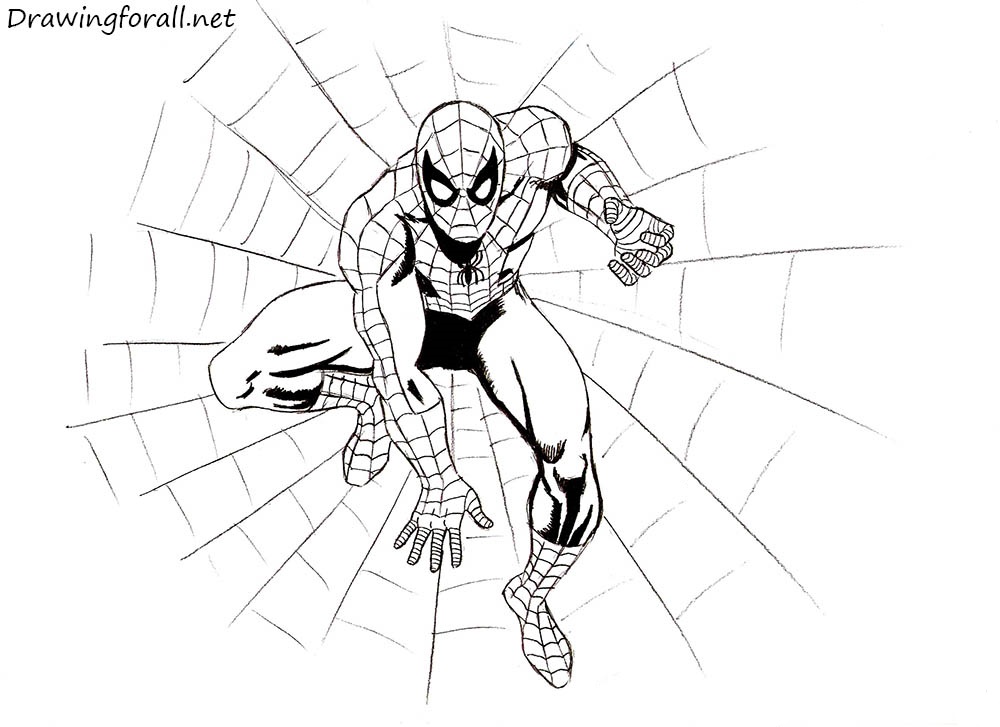 Hello! Today’s drawing tutorial will be devoted to the one of the most recognizable superheroes on the planet – Spider-Man!

Peter Parker, aka Spider-Man, appeared on the pages of comic books back in 1962, has become incredibly popular. Let’s begin this lesson and learn how to draw The Amazing Spider-Man!

Let’s start with a stickman – man made of sticks and circles. Using the stickman we denote the position of the character, the proportions of his body and the position on the paper. Note the unusual angle and position – because of these factors the stickman Spider-Man seem disproportionate. 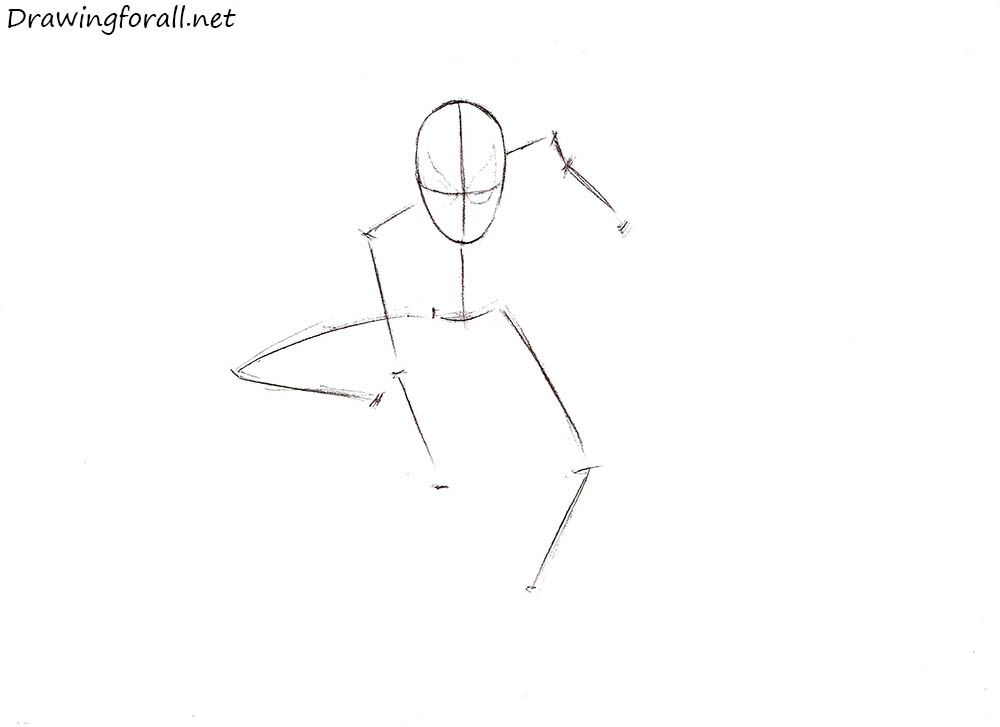 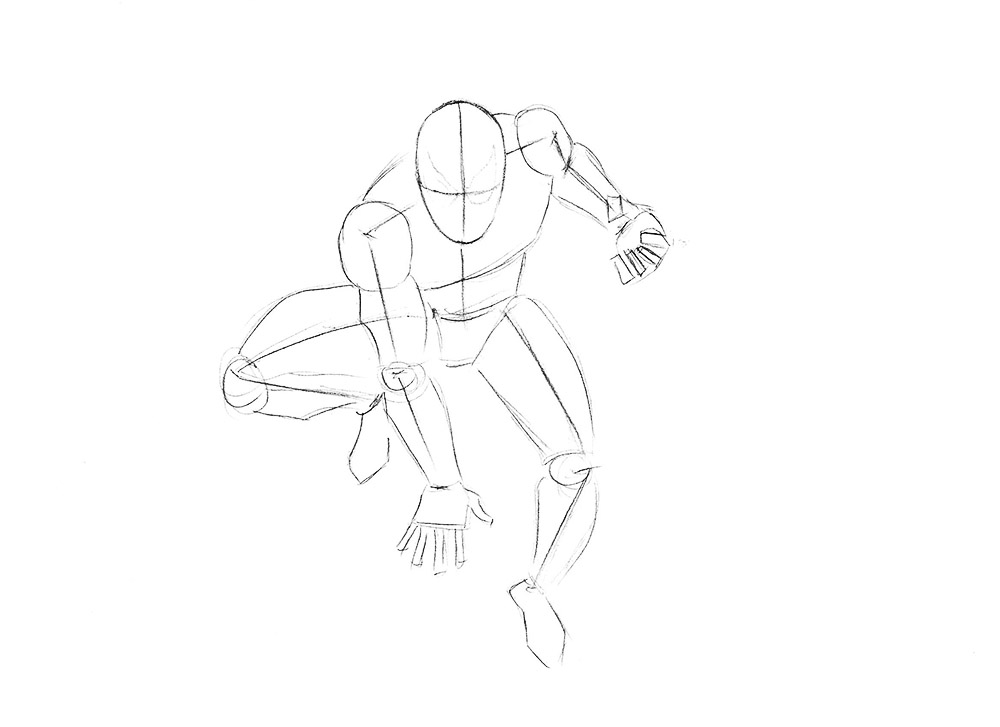 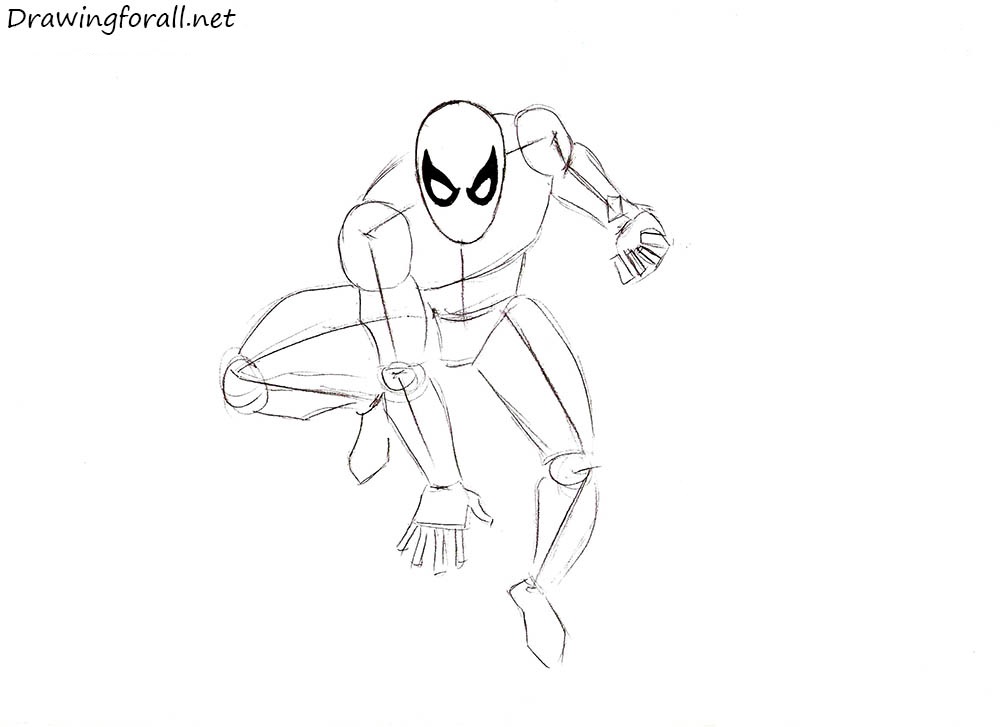 Erase the guidelines from the torso, then circle its contours, making them smooth and clean. Besides the external contours and we can clearly see the outlines of massive pectoral muscles and light lines of the clavicle.

At this stage sketch the lines of costume, or rather, the boundaries of the red and blue. In the subsequent steps in this area we will draw the pattern in the form of a web. 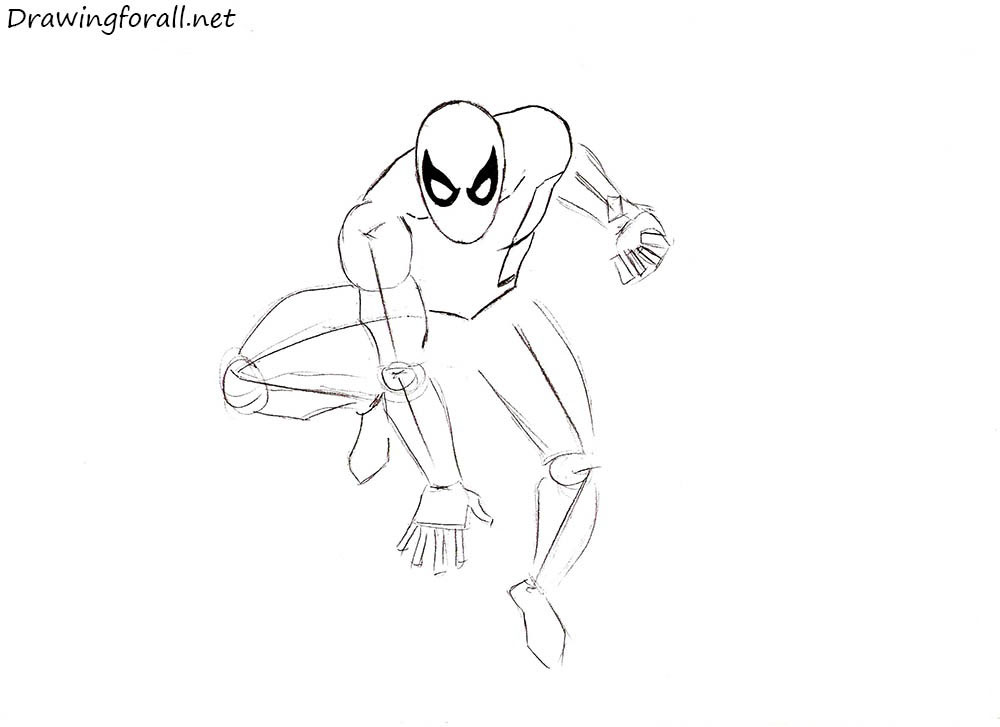 Erase unnecessary guidelines of the first steps from the arms of Spider-Man, circle the contours and give correct anatomical form to the arms. Draw the fingers and mark the knuckles. Don’t forget to draw the boundaries of blue and red, which begin in the middle of the forearm, and passing through the arm connect with the boundary on the torso. 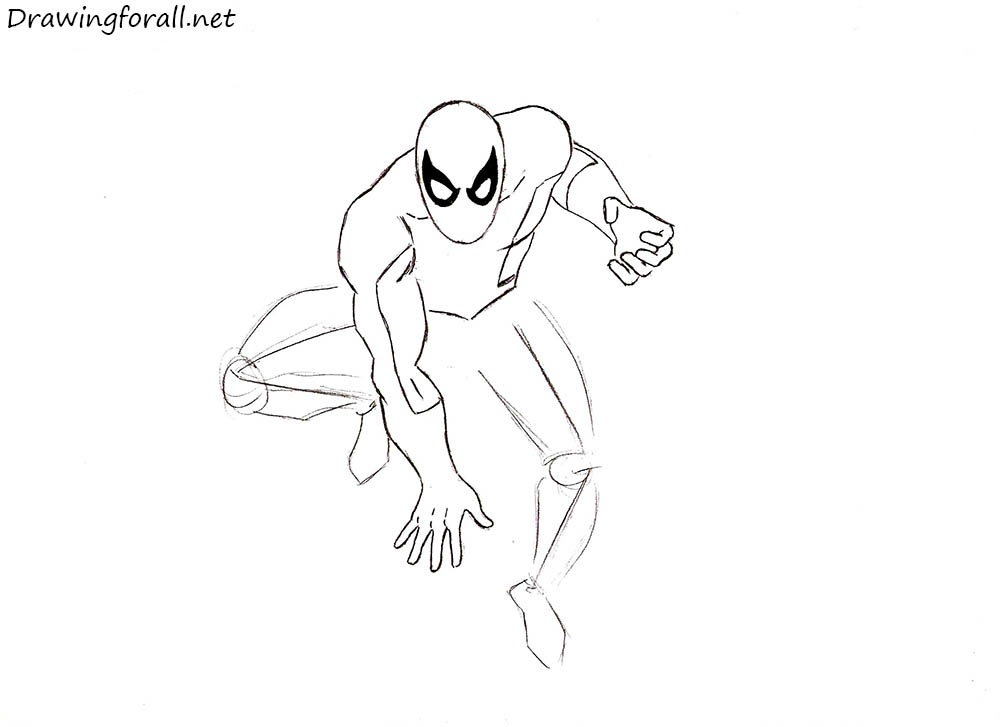 In this step we draw the legs of Spider-Man. As in previous stages, we will need to erase the guiding lines and circle the contours. In addition to the outer contours of the legs, mark the lines of muscles on the thighs and shins. Pay special attention to the knees – there are many lines in which it is easy to get confused. The final touch to this step, draw a lines of the shoes of Spider-Man. 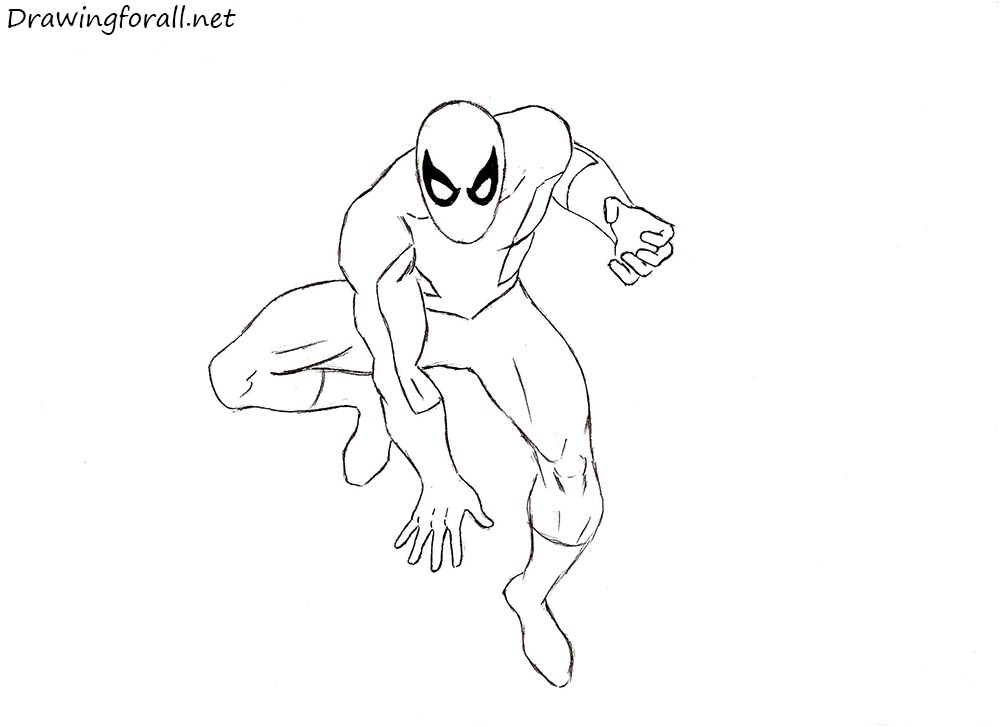 In previous steps, we drew the boundaries of red and blue colors on the suit. In this step we will draw vertical lines inside the red areas. All lines depart from the conditional center of the web, which is located between the eyes on mask. At the same step draw the web pattern on fingers – lines should be placed close enough. 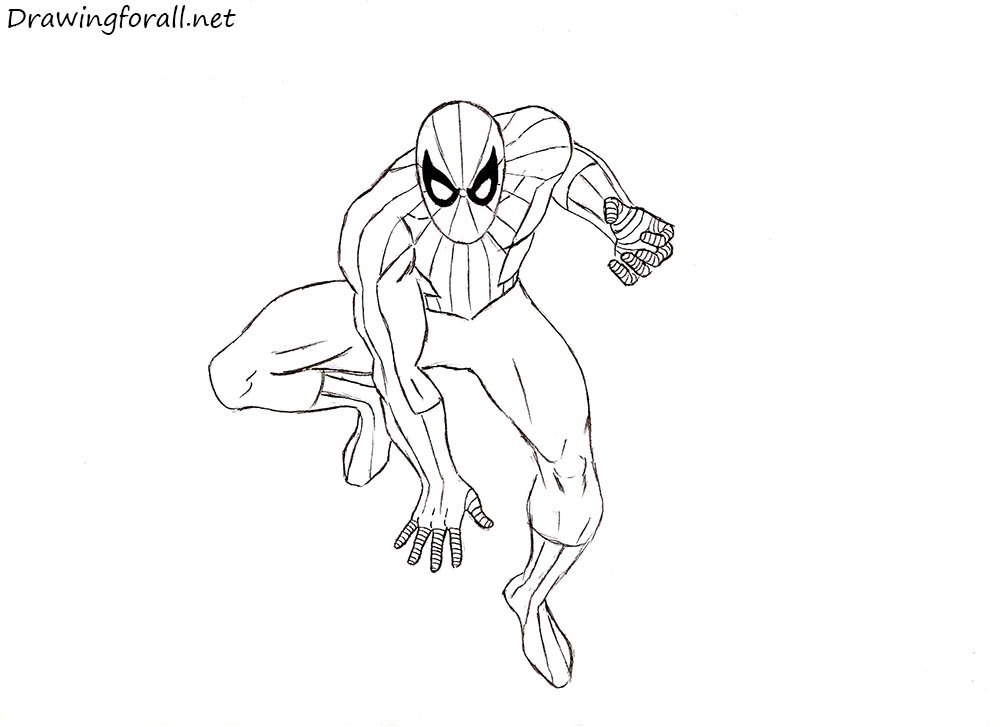 Add second web layer, which is positioned horizontally. Rings of this layer as well as vertical lines, moving away from the central point between the eyes of the mask and diverge across the red part of the costume. Note that each line has a slight bending. 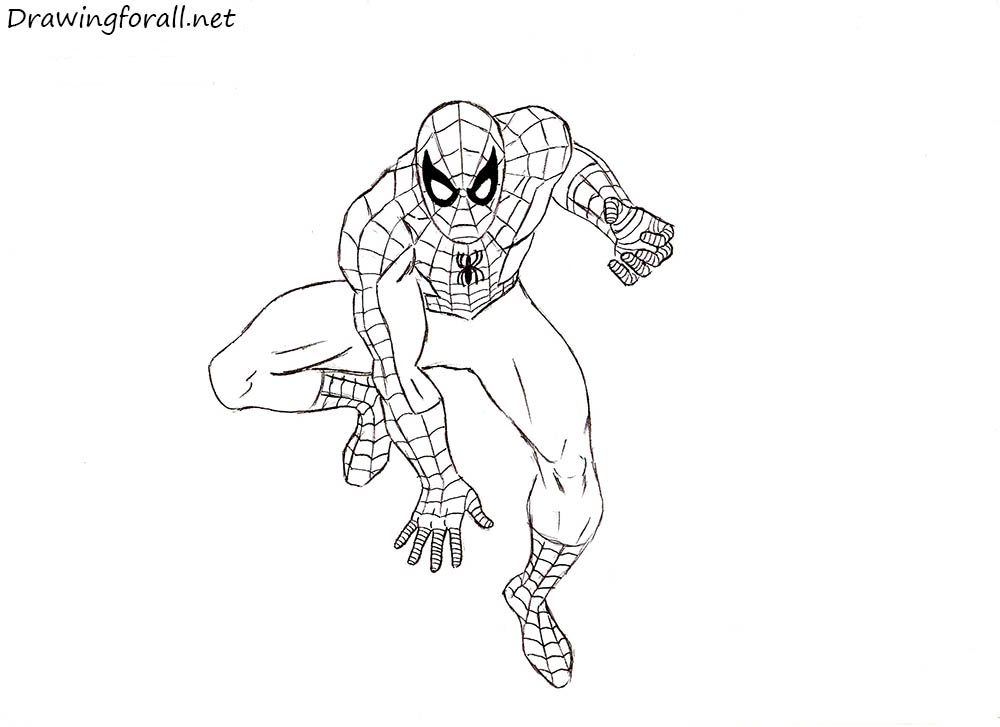 In this, last step of the lesson on how to draw The Amazing Spider-Man, we add shadows. Shadows in this tutorial are made in comics style – they are contrasting and look like black spots.

Draw the shadows in two steps – first, outline the contours of the shadows and then paint the shadow areas, using very dense hatching. To make the picture more interesting, you can draw a web on the background, as in our illustration. 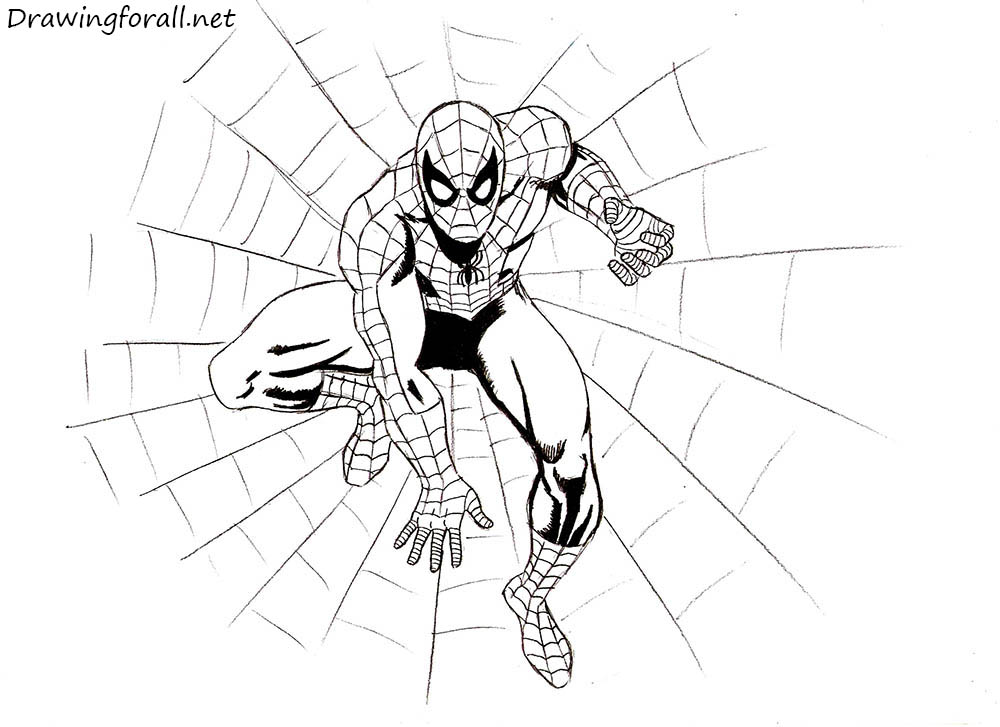 In this lesson, our artists have shown you how to draw one of the most famous superheroes – The Amazing Spider-Man. If you want a little more complex lesson, try our first Spider-Man drawing lesson.