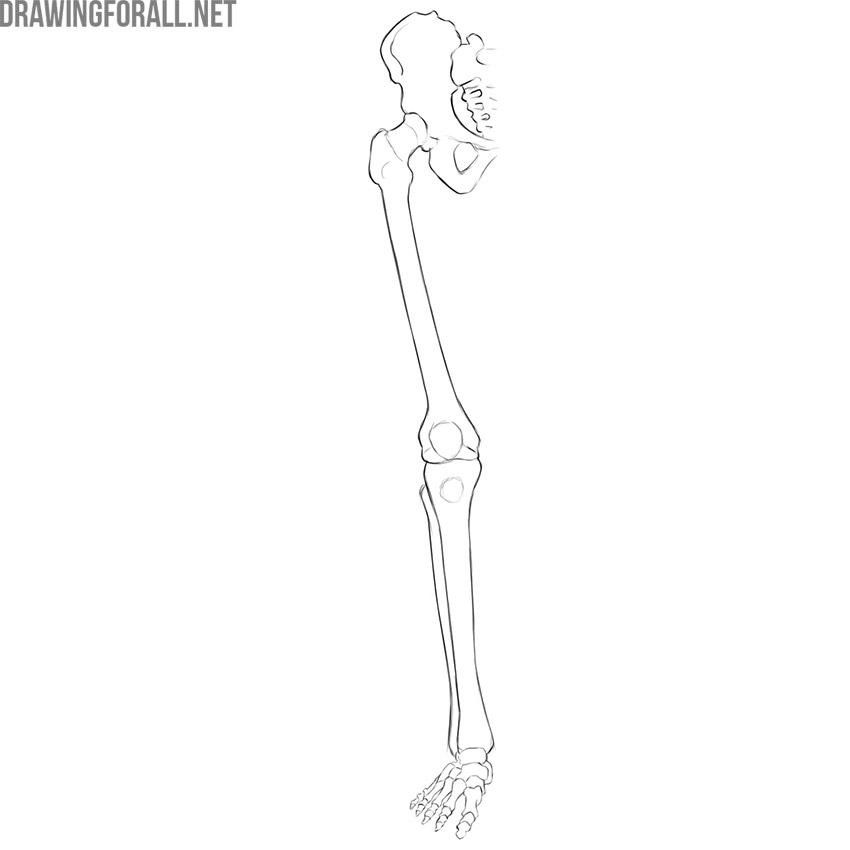 The skeleton of the lower limbs and the vertical spinal column is a unique evolutionary device that allowed a person to raise his head above all other living creatures on our planet. 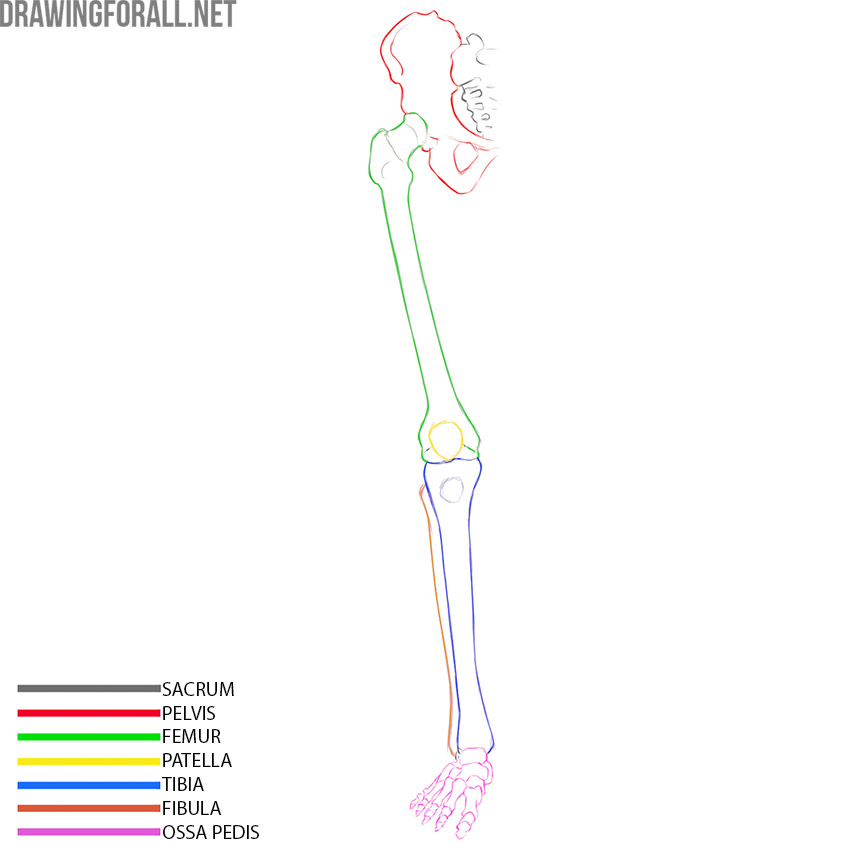 So let’s take a look at each component of the lower limb skeleton. 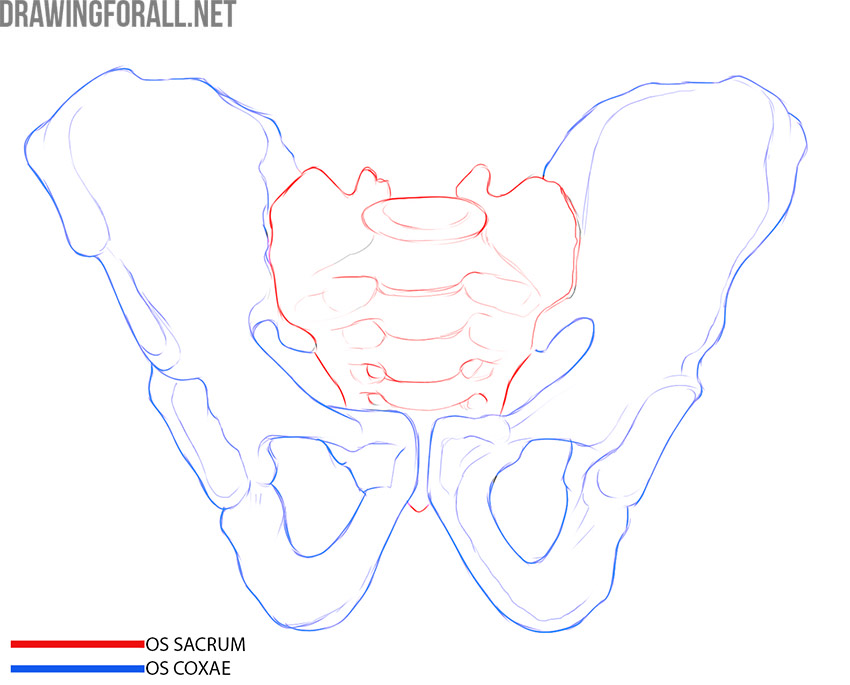 The pelvic bones are of great physiological importance. The pelvic bones form the cavity of the small pelvis, in which the vital organs, great vessels, and large nerve trunks that innervate the entire lower limb are located. Also, the pelvic bones are involved in the process of childbirth. It is very important for obstetricians and gynecologists to correctly measure the distance between certain points of the pelvic bones of pregnant women in order to predict problems that may arise during childbirth. 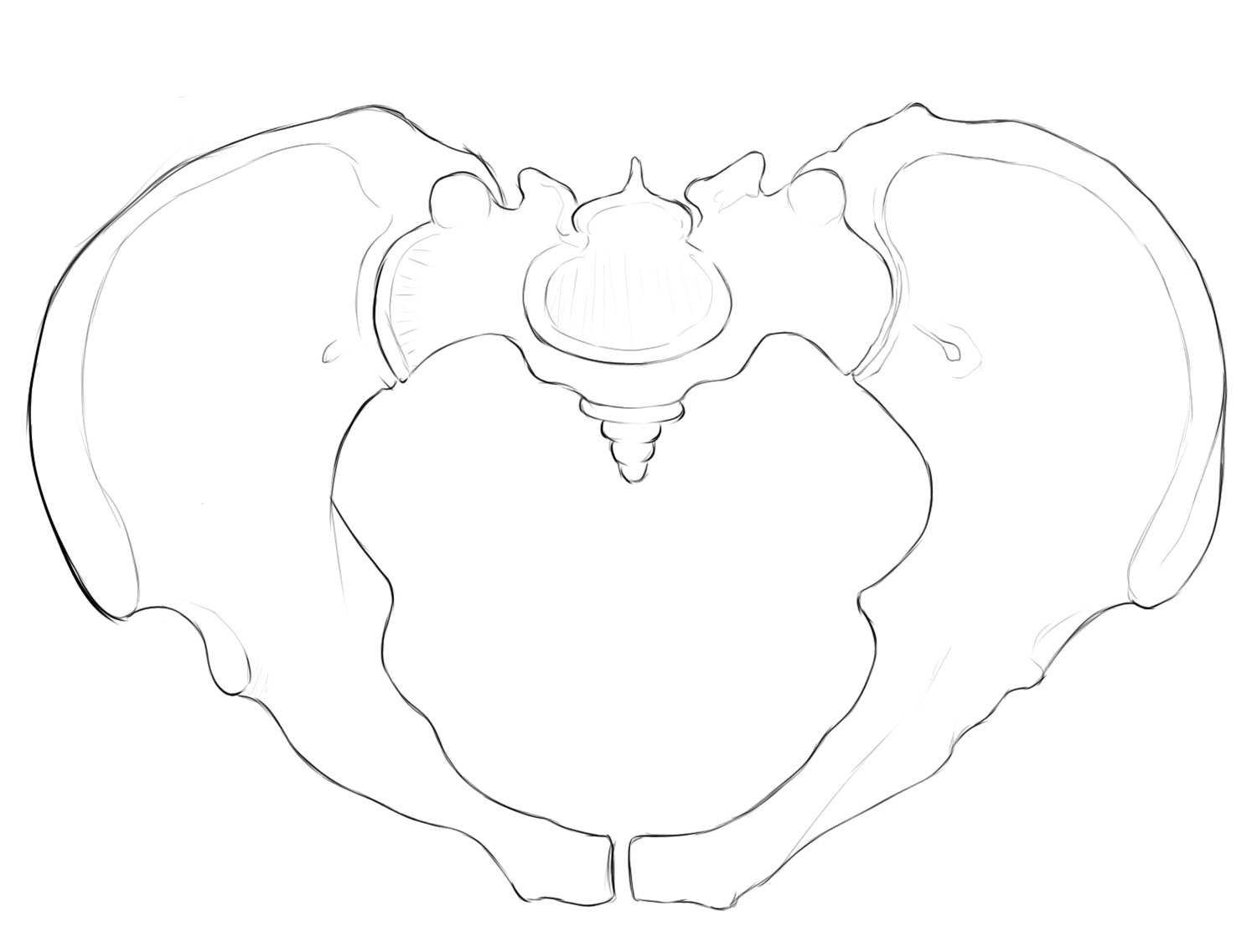 So, the pelvic bone consists of the ilium, ischium, and pubic bones. These three bones are connected by cartilage in childhood, and in adolescents, they grow together into a single bone. 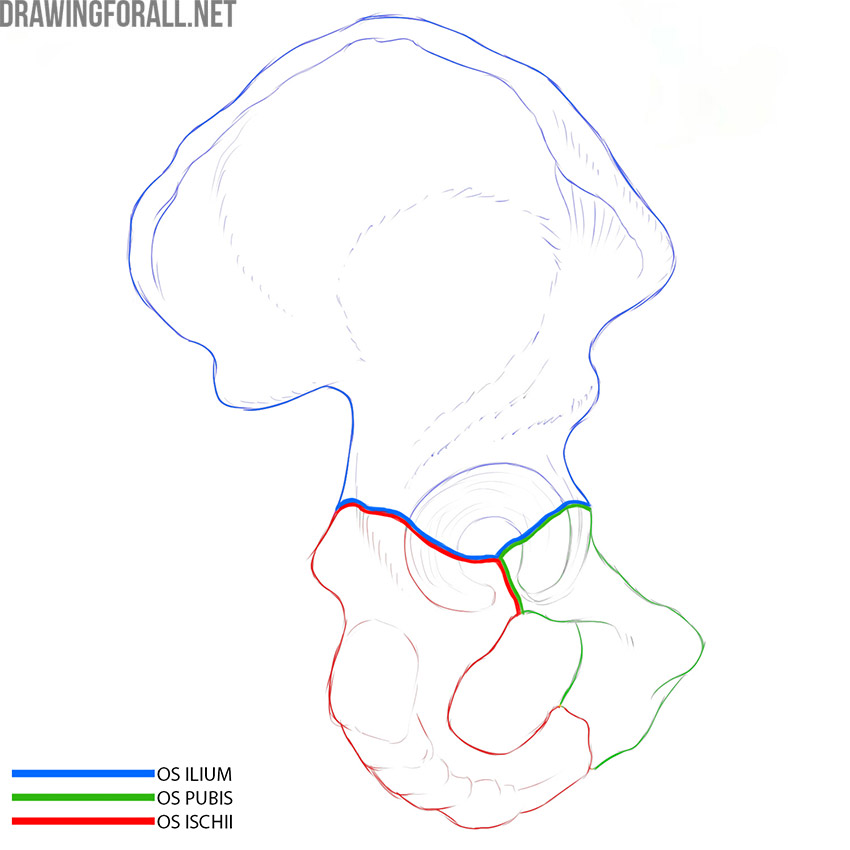 The bodies of the three bones grow together, forming the acetabulum – the junction of the pelvic bone and the rounded head of the femur. This forms a highly mobile and multifunctional hip joint.

The female pelvis has several differences from the male pelvis. We will focus on two of the most notable ones:

It is always very important to determine the characteristics of the figure of the person you are drawing. The female pelvis is always wider and larger. This is especially noticeable in relation to the width of the shoulders – a typical male figure is characterized by wide shoulders and a narrow pelvis, and the female is on the contrary.

The femur (or the thigh bone) is one of the most massive and strong bones in the body. The femur is articulated with the pelvic bone at the proximal end and with the shin (tibia) at the distal end. There is a large rounded protrusion at the proximal end of the femur, it is the head of the femur (caput femoris). This shape allows for maximum mobility of the hip joint.

The connection of the femur to the pelvis has a different shape in men and women. If you look at the men’s skeletone, you can see the head and body of the femur form an angle close to the right angle. An obtuse angle is more typical of the female skeleton. This affects the contours of women’s hips – it is because of this feature that women’s hips look wider and rounder. 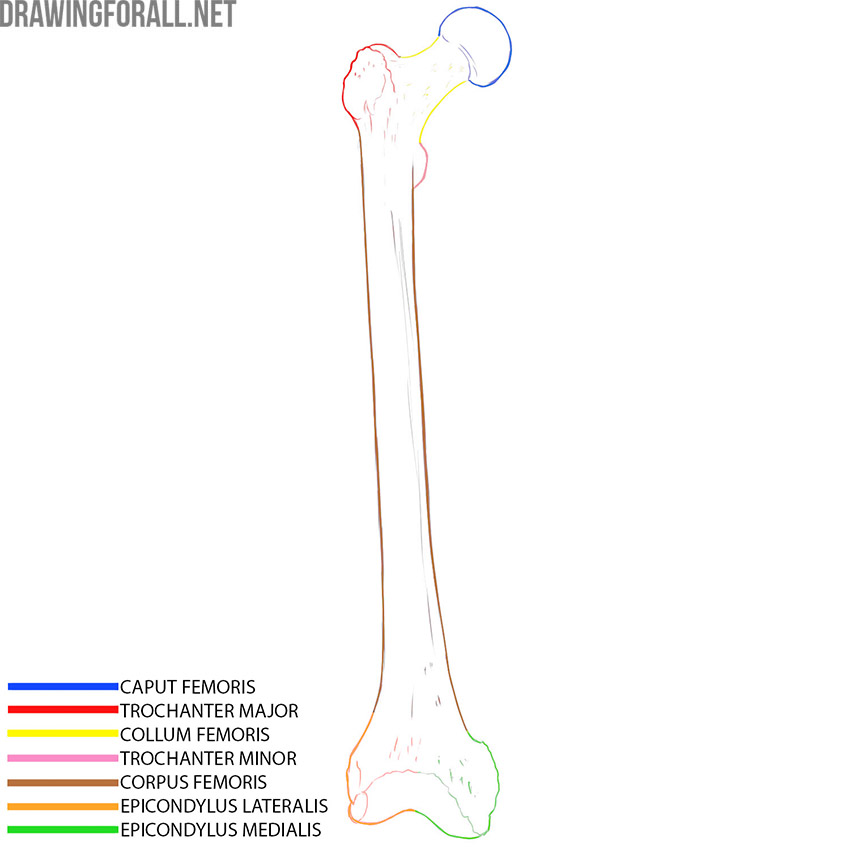 The patella is a small but dense bone that is part of the bones of the knee joint. The patella is fixed by the tendons of the thigh muscles, it covers the knee joint and makes it more stable, preventing unnecessary movements in the medial and lateral directions. 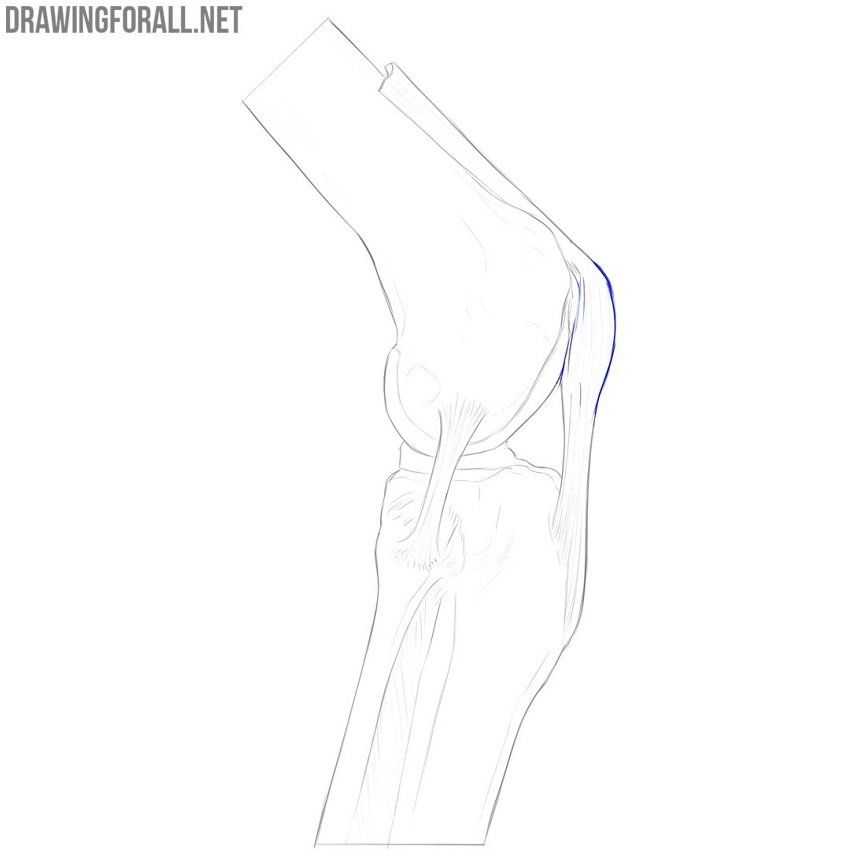 The patella also connects to the powerful cruciate ligaments that provide additional stability to the knee joint. 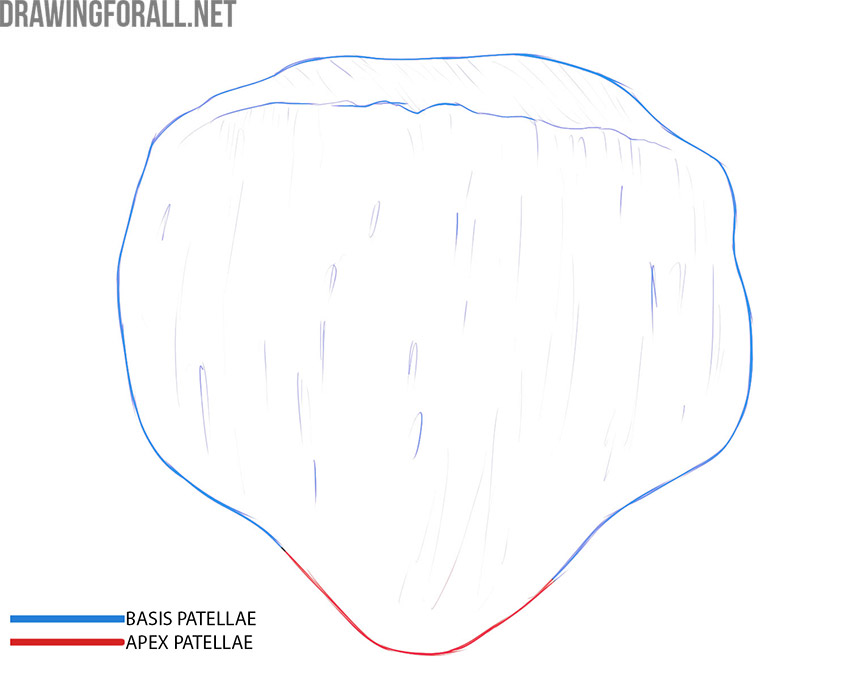 The patella has a base, an apex, and two surfaces. This small bone looks like a flat stone with a distinct edge on one side.

The tibia is a very massive, strong bone that connects to four bones at once. The proximal end of the tibia articulates with the femur, the distal end with the talus of the foot. On the lateral side, the fibula adjoins the tibia. 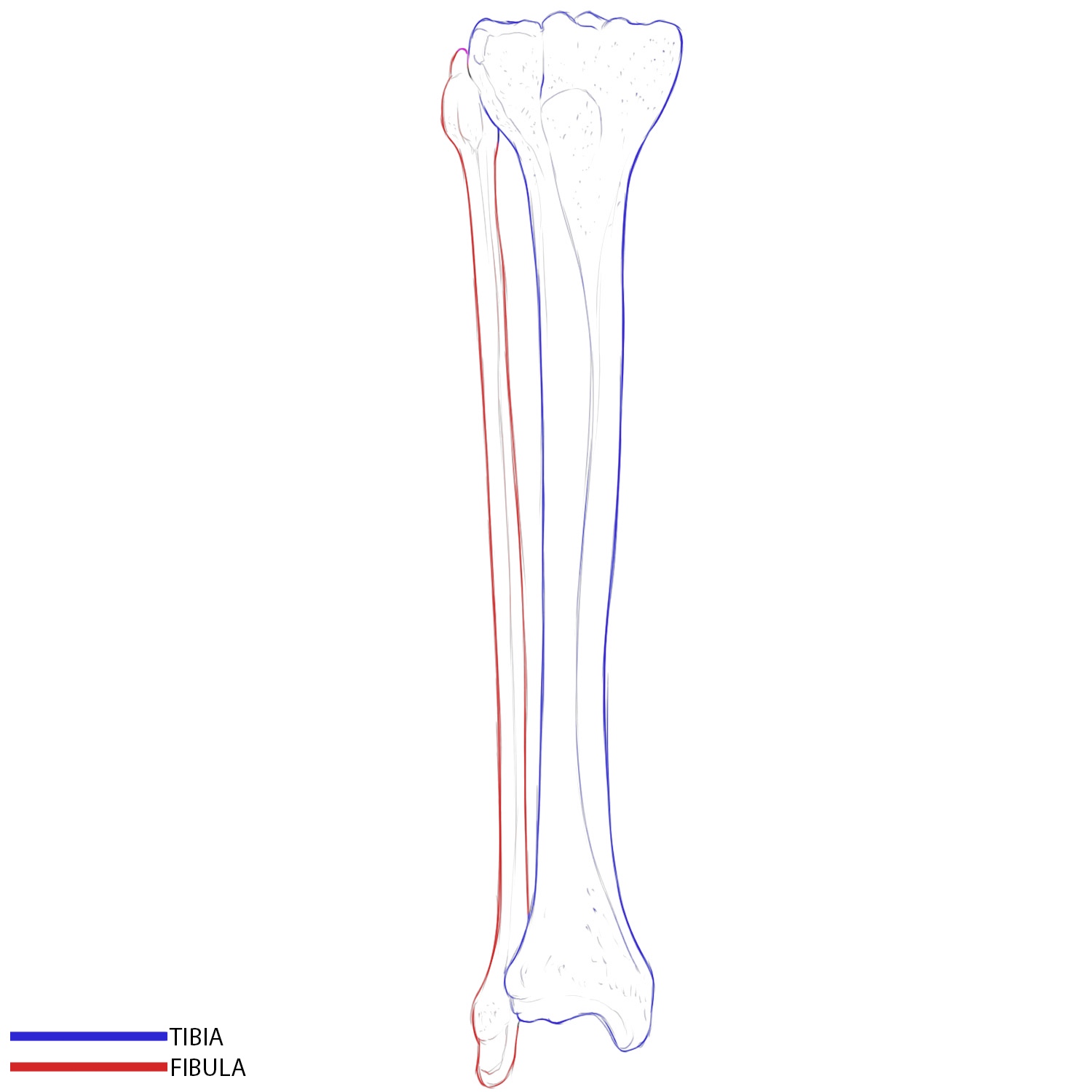 Like all tubular bones, the tibia has a body (corpus tibiae) and two ends – the upper and lower. The powerful body of the tibia expands upward to form two large condyles to connect to the femur (condylus lateralis/ condylus medialis). 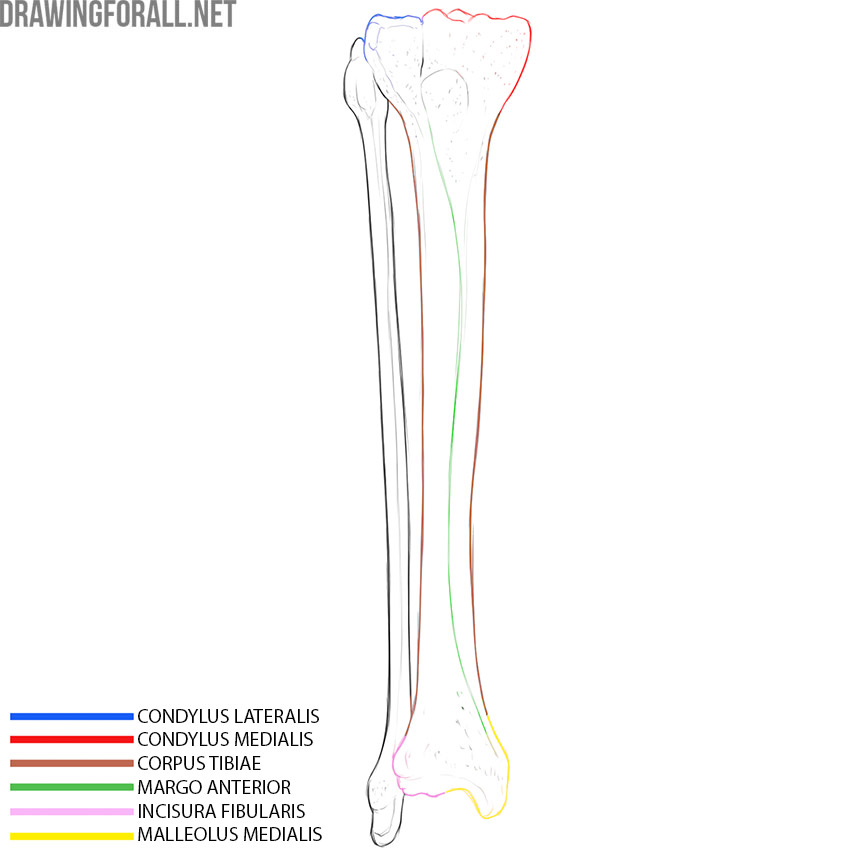 The tibia has a trihedral form for most of its length. The front edge of the tibia (margo anterior) is contoured through the skin. You can also palpate it easily.

By the way, Muay Thai fighters (a popular form of the strike martial arts) use the shin as a shield, protecting themselves from hits and exposing the hard front edge of the tibia to attack. 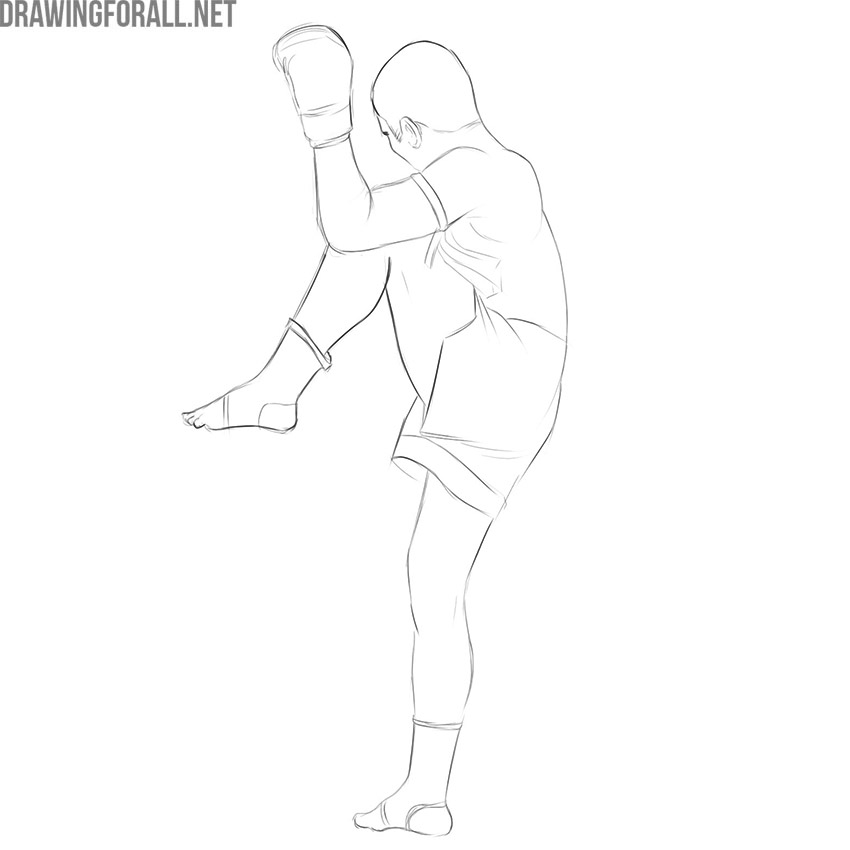 I think that the structure of the fibula will not be a surprise to you because this bone has a body, an upper end, and a lower end. The body of the fibula is much less massive than that of the tibia.

The proximal end of the fibula is slightly rounded outside – this is the head of the fibula. Inside this end, there is a small depression for articulation with the tibia. 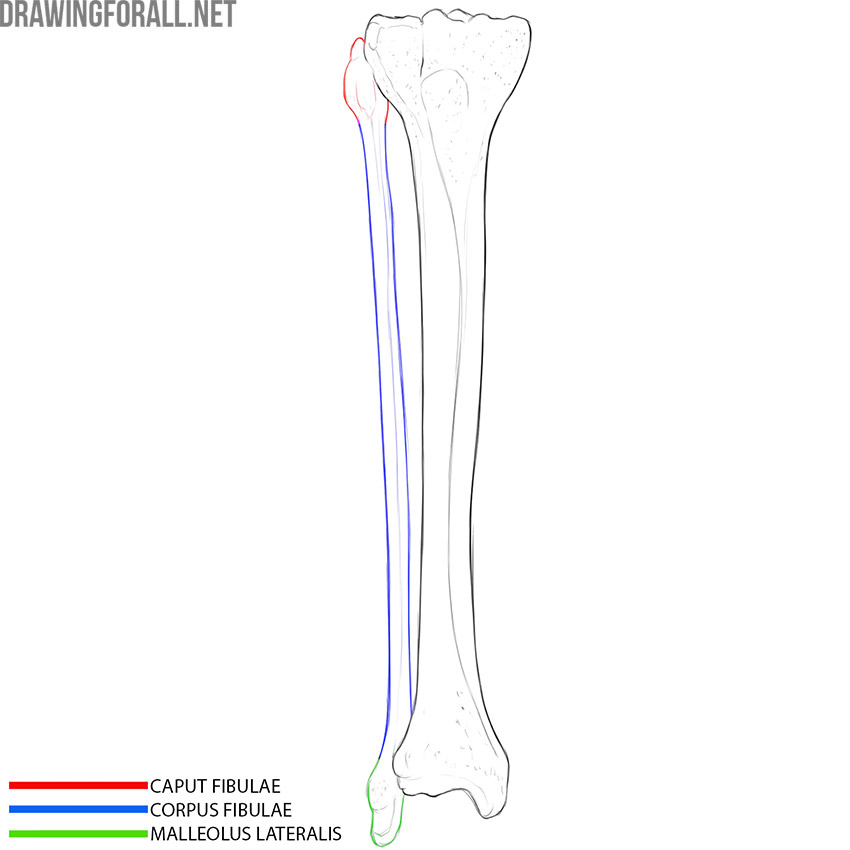 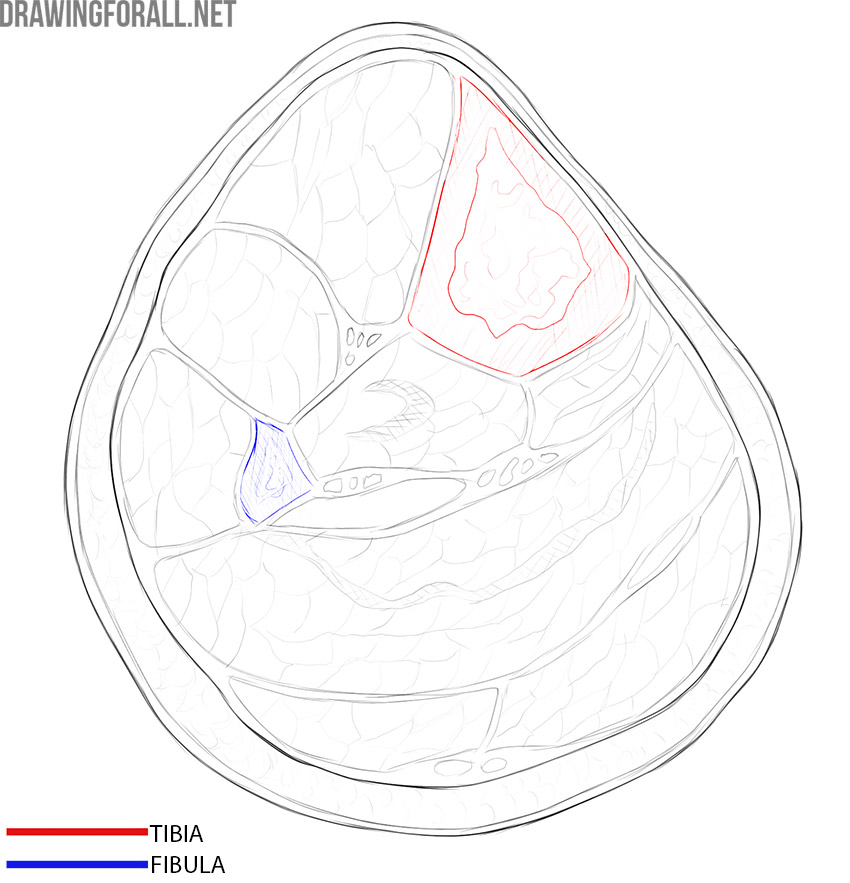 The human foot is a unique evolutionary device designed for running, jumping, and walking on two legs. The foot consists of the bones of the tarsus, metatarsus, and phalanges of the toes.

The talus and calcaneus are very strong and dense bones. The talus is grasped from above by two tibial bones, forming the ankle joint. The tibia wrap around the medial and lateral ankle surfaces in a fork-like manner.

In addition to the two tibias, the talus articulates with the calcaneus, as well as with the scaphoid and cuboid bones.

If you look at the calcaneus, you immediately see a large bump that goes into a slight curve. This construction, reinforced by muscles and ligaments, allows us to jump from a sufficiently high height and run at high speed without injuring the bones of the upper limb or spine. 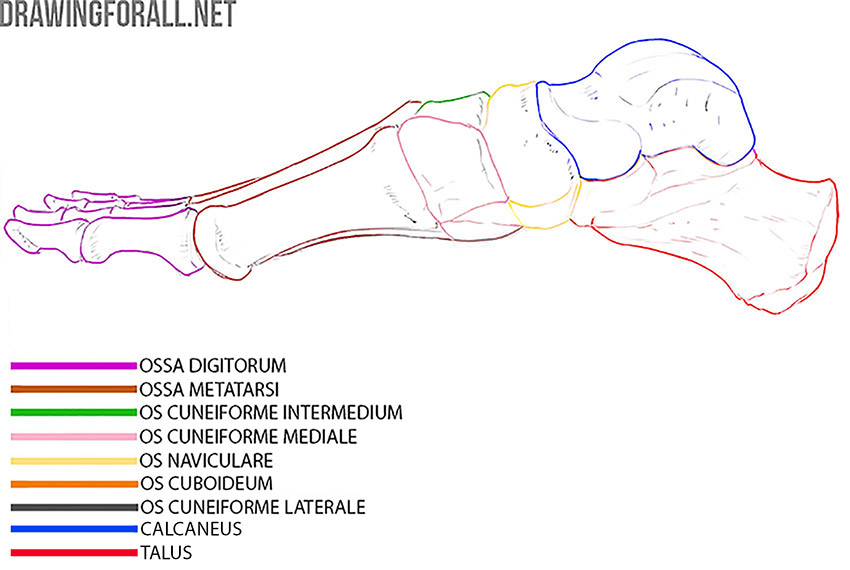 The metatarsal bones are very important. It is they that form the characteristic bend of the foot, which is also called the arch. This bend is necessary to cushion jumps and other shock loads.

This bend is especially noticeable when we look at the foot in profile: