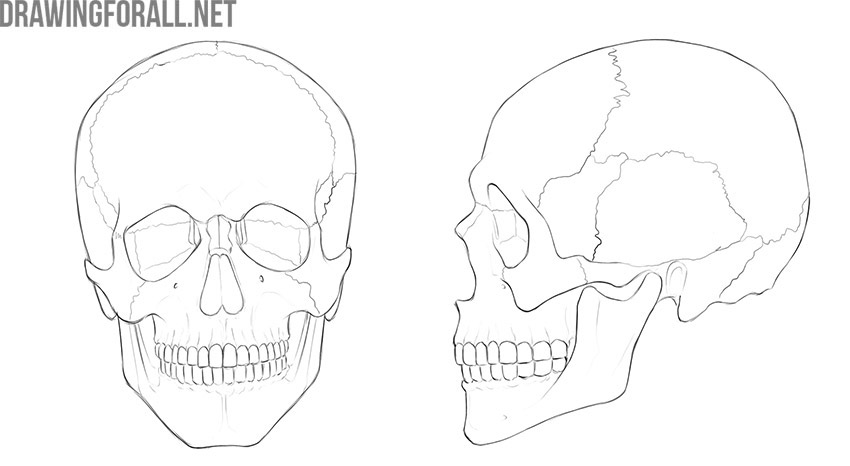 The skull is the skeleton of the head. We can also say that the skull is an extremely important bone structure that protects everything that helps us live and exchange information with the world. The skull forms reliable protection for the brain, organs of vision, hearing, smell, touch, and taste. It is also necessary to remember about the pyramidal tracts, the control of vital centers, and the glands. In general, the skull is a very useful thing. 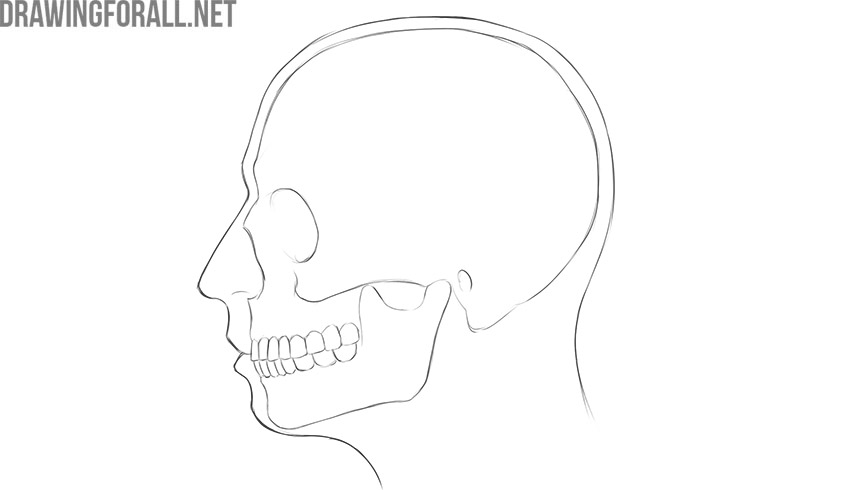 And today the team of Drawingforall.net will tell you the basic anatomy of the skull in order to make it easier for you to draw a skull, and also to better represent the bone base of the human head.

So, the human skull consists of 23 bones. The human skull is divided into two major sections – the cranium and the facial skeleton. 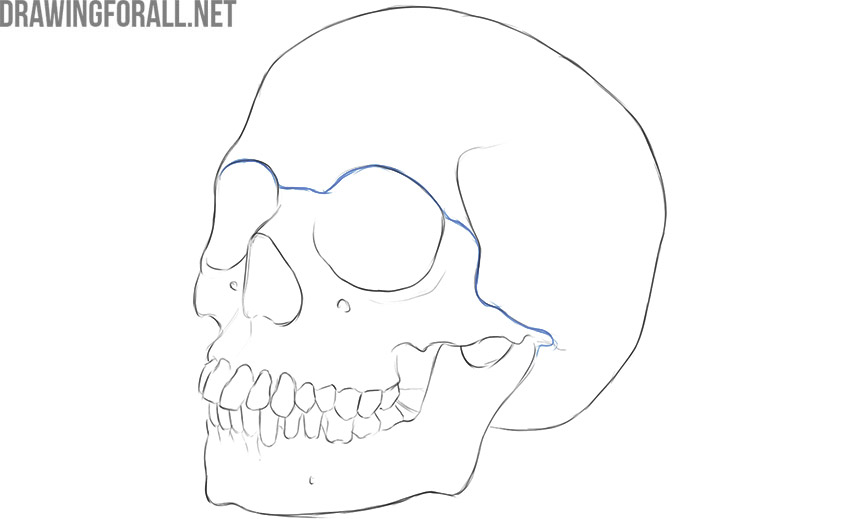 The cranium forms the cavity of the skull in which the cerebrum is located.

To see the sphenoid and ethmoid bones, we need to remove off the top of the skull.

The frontal bone plays a huge role in shaping the image of a person. Small mistakes in drawing the superciliary arches or incorrect calculation of the height of the frontal bone can distort even the best portrait beyond recognition. 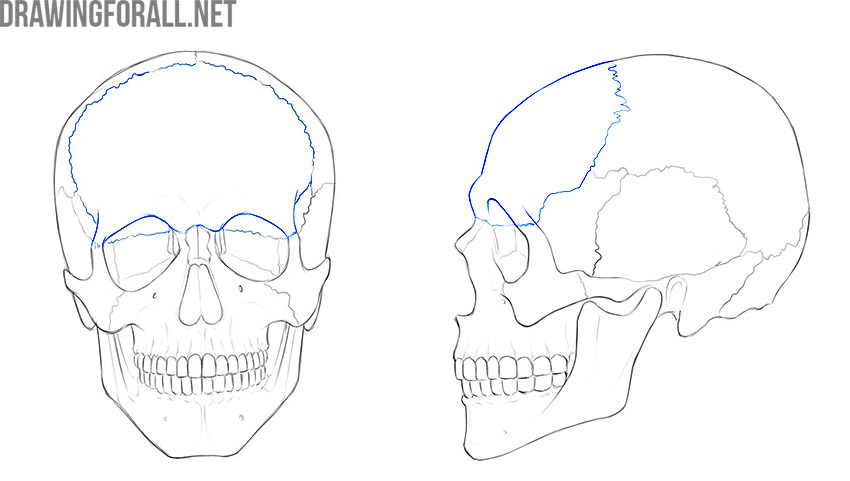 These are paired bones. Thus, there are right and left parietal bones that form the upper part of the top of the skull. The parietal bones connect with the frontal bone in front, with the occipital bone in the back and with the temporal bones laterally. 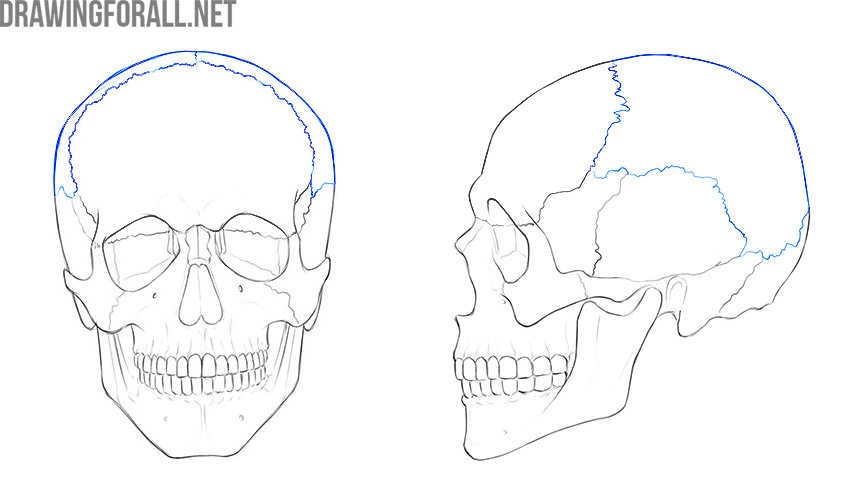 If we remove the top of the skull, we will see that the cavity of the skull looks like three pits (fossa) – front, middle, and back. 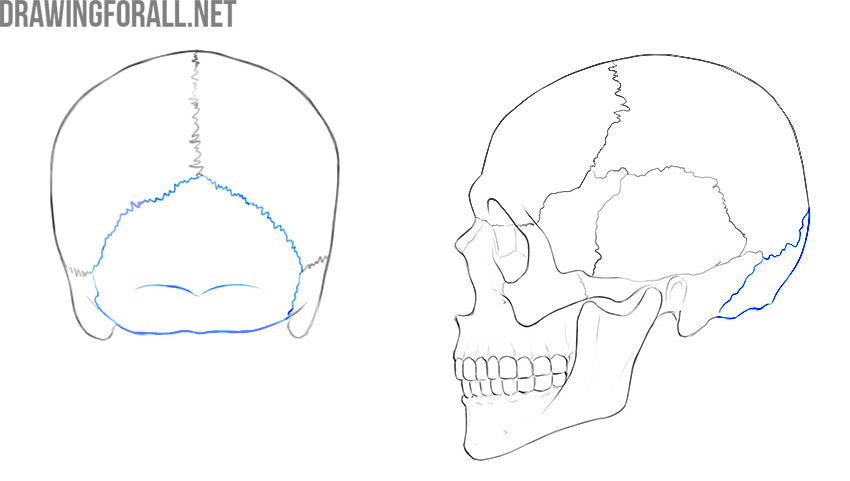 The temporal bone has two clearly visible parts – the pyramid and the squamous part, as well as the tympanic part, which does not matter in plastic anatomy. In the thickness of the pyramid are the channels of the temporal bone, in which the most important vessels and nerves pass, such as, for example, the internal carotid artery and facial nerve.

However, the channels of the temporal bone are also not important for plastic anatomy.

The temporal bone has several clearly visible processes that form the appearance of the skull. First of all, it is the zygomatic process, which is directed towards the facial skull and connects to the zygomatic bone. You can also see and even feel the rounded mastoid process, which is located directly under the ear. There is also the styloid process that is covered with soft tissues and does not create visible contours on a living person. 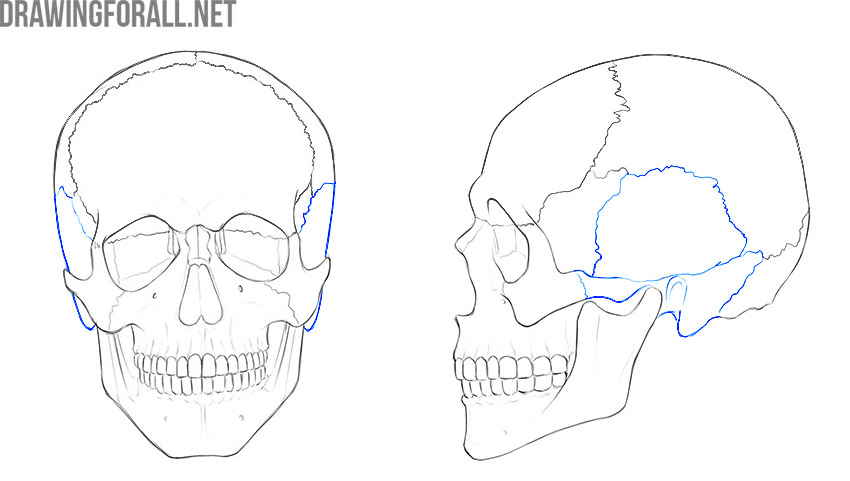 Many artists forget about the sphenoid bone because when we look at a whole (un-sawn) skull, we can see only small parts of this bone.

In the corpus of the sphenoid bone is located a very important bone deepening. This bone, called the sella turcica is a small cozy hole in which the pituitary gland is located – the most important endocrine gland. 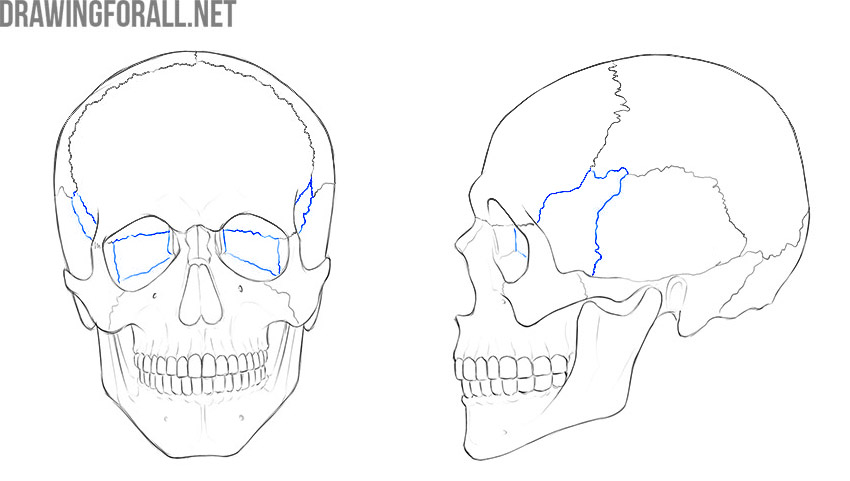 The ethmoid bone is located in the anterior cranial fossa. This small bone is pierced by numerous openings through which vessels and nerves pass – mainly the fibers of the olfactory nerves. The ethmoid bone does not have much significance in plastic anatomy, because it cannot be seen on the whole (un-sawn) skull.

The facial section of the skull forms several important holes at once. The eye socket is a reliable wall for the organ of vision, the oral cavity is the beginning of the digestive system, and the nose is the first echelon of air purification that enters our lungs. Let’s see which bones form the basis for these anatomical structures.

⦁ The frontal process is located on top. This process connects the zygomatic bone with the frontal bone;

⦁ The temporal process is directed back and laterally to connect to the zygomatic process of the temporal bone.

The zygomatic bone also connects to the upper jaw. A fairly long section of this joint is called the infraorbital suture. 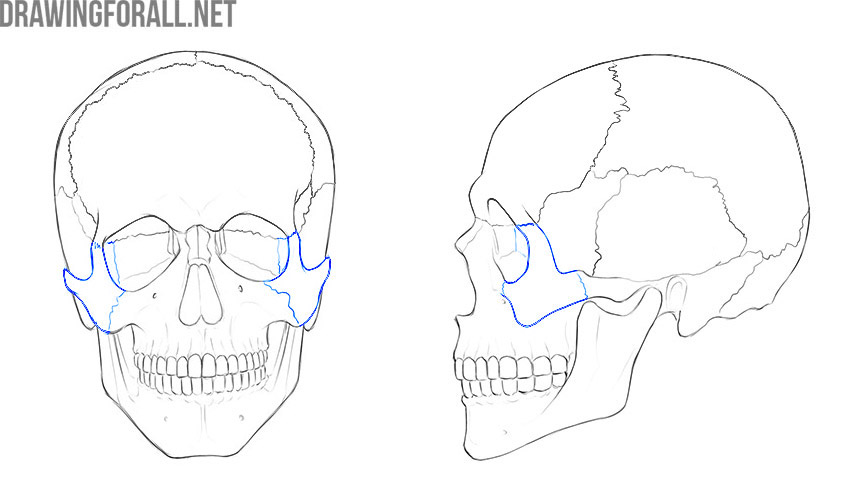 This small bone is clearly visible if we look into the eye socket of a well-prepared skull. The lacrimal bone looks like a small quadrangular plate that lies in the medial wall. The upper edge of this plate connects to the orbital part of the frontal bone, and the lower edge connects to the upper jaw. 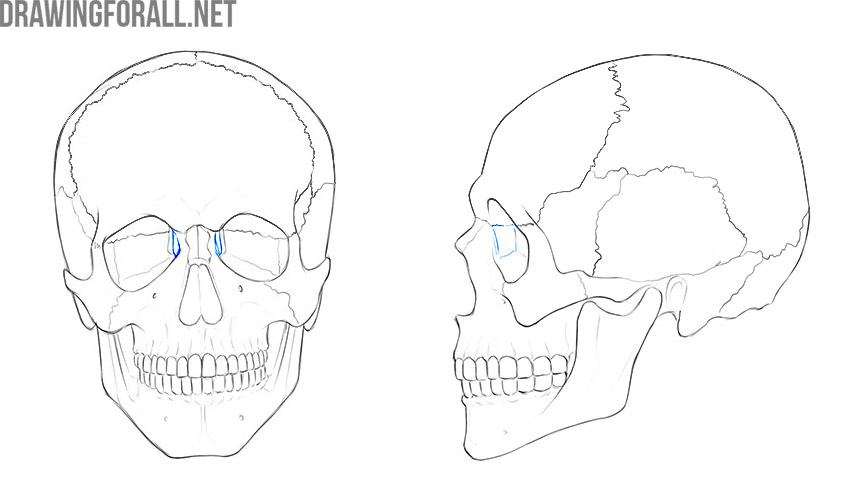 These are small, but rather important bones. For some reason, many textbooks on plastic anatomy do not mention nasal bones, which is rather strange. 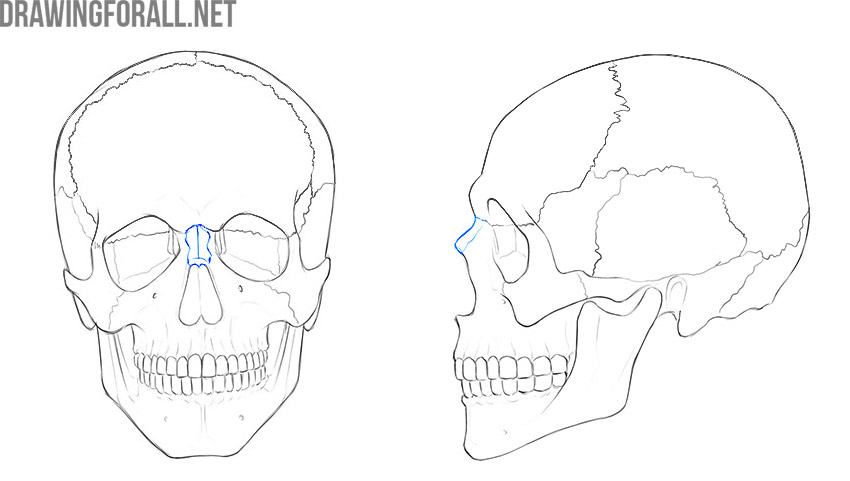 Contrary to the existing stereotype, the upper jaw is not one solid bone. There are two upper jaws that connect in the center of the face. So, the upper jaw is a large paired bone that forms a significant area of ​​the face from the orbits to the oral cavity.

Each upper jaw has a body and four processes. One of these four processes we can not see on the whole skull, and the rest are clearly visible and accessible for palpation:

⦁ Frontal process. This is the highest located process of the upper jaw, its upper edge is connected to the frontal bone;

⦁ Zygomatic process. With this process, the upper jaw connects to the zygomatic bone;

⦁ Alveolar bone. This is the lower surface of the upper jaw, in which there are holes for the roots of the teeth;

⦁ Palatine process. It is this process that is hidden from our eyes. But then your dentist can palpate it because it forms the upper wall of the oral cavity; 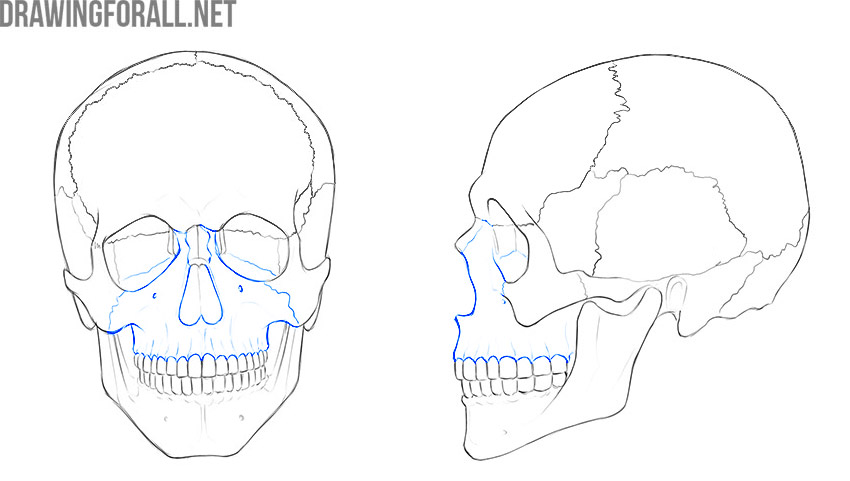 Unlike the upper jaw, the mandible is one solid bone. The lower jaw is quite remarkable. Among all the bones of the skull, only the lower jaw and temporal bone form a full-fledged, mobile joint.

In older people, the body and branches of the lower jaw tend to thin out – this is due to the gradual loss of teeth and a decrease in the load on bone tissue. In this case, the characteristic position of the lower jaw is formed, when it is noticeably pushed forward. 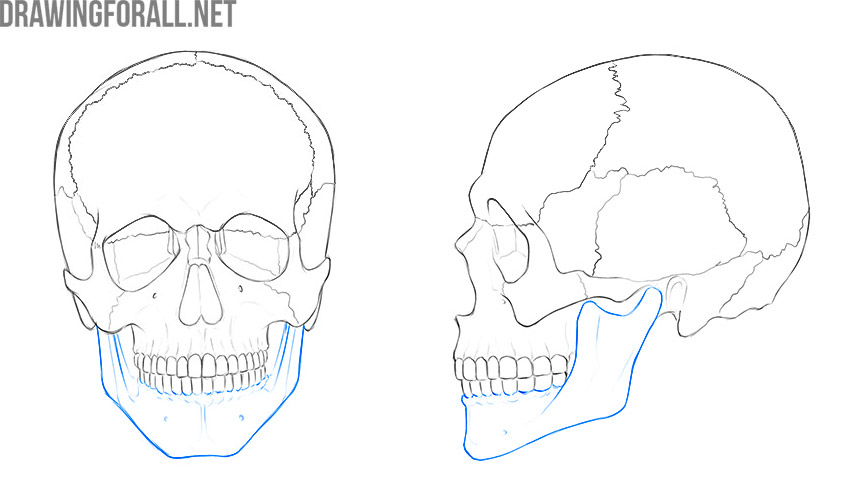 These bones are involved in the formation of the nasal and oral cavities. We cannot see them without a preliminary cut of the skull in the sagittal plane, therefore, in plastic anatomy, they are not of fundamental importance. 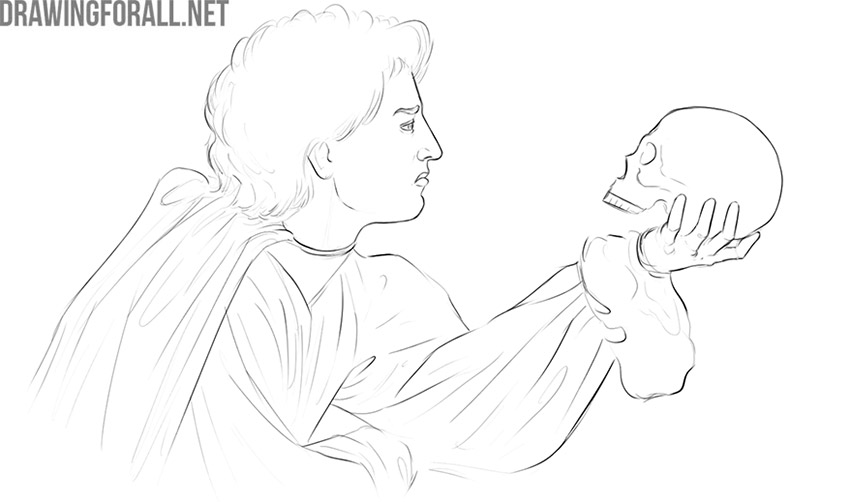 It is very important for the artist to know human anatomy in order to accurately draw portraits, making them voluminous and realistic. The information from this article, along with knowledge about perspective, proportions, light and shadow, is the basis for any artist. If you want to learn how to create compelling and realistic drawings, then be sure to study the articles from the Basic Drawing Lessons category on Drawingforall.net. And also do not forget to subscribe to Drawingforall.net on Twitter, Facebook, and other social networks to keep abreast of new articles on our website.