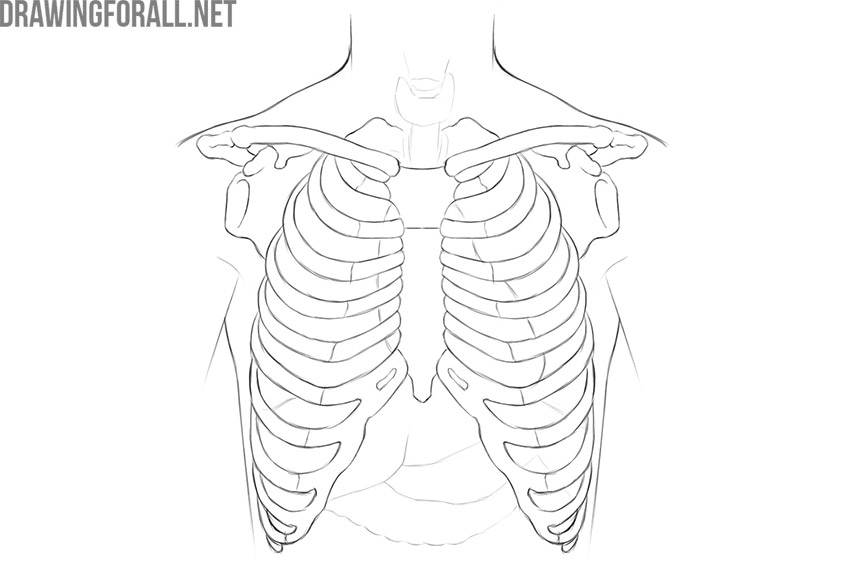 The body is formed by several cavities, their contents, as well as support from bones and muscles. These cavities are: 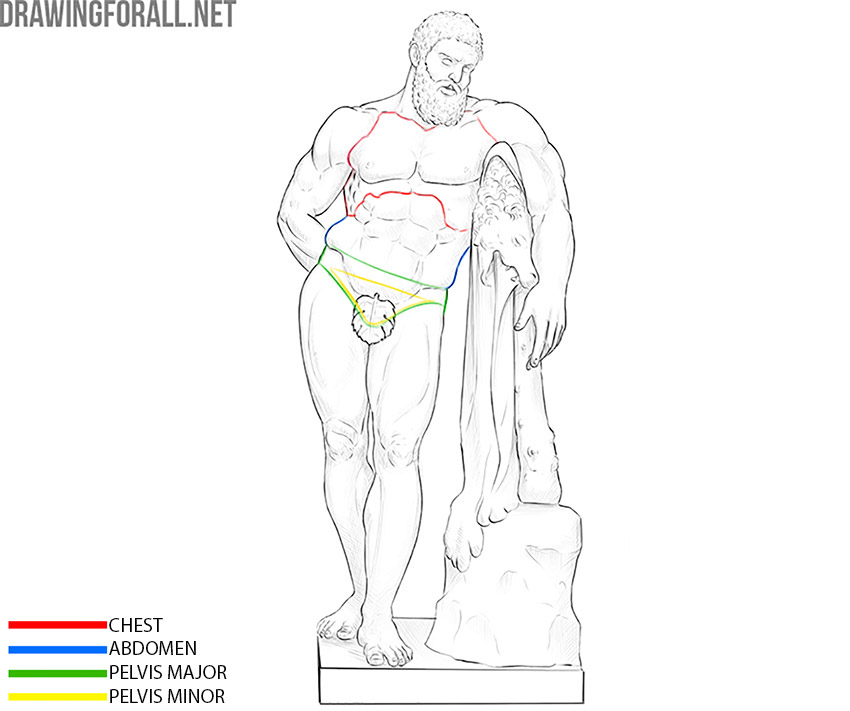 The skeleton of the chest cavity is formed by the thorax (the rib cage). The pelvic skeleton is formed by the pelvic bones, sacrum and tailbone. Pelvic bones we will analyze in a separate article about the lower extremities. The abdominal cavity has no bone support other than the spine. 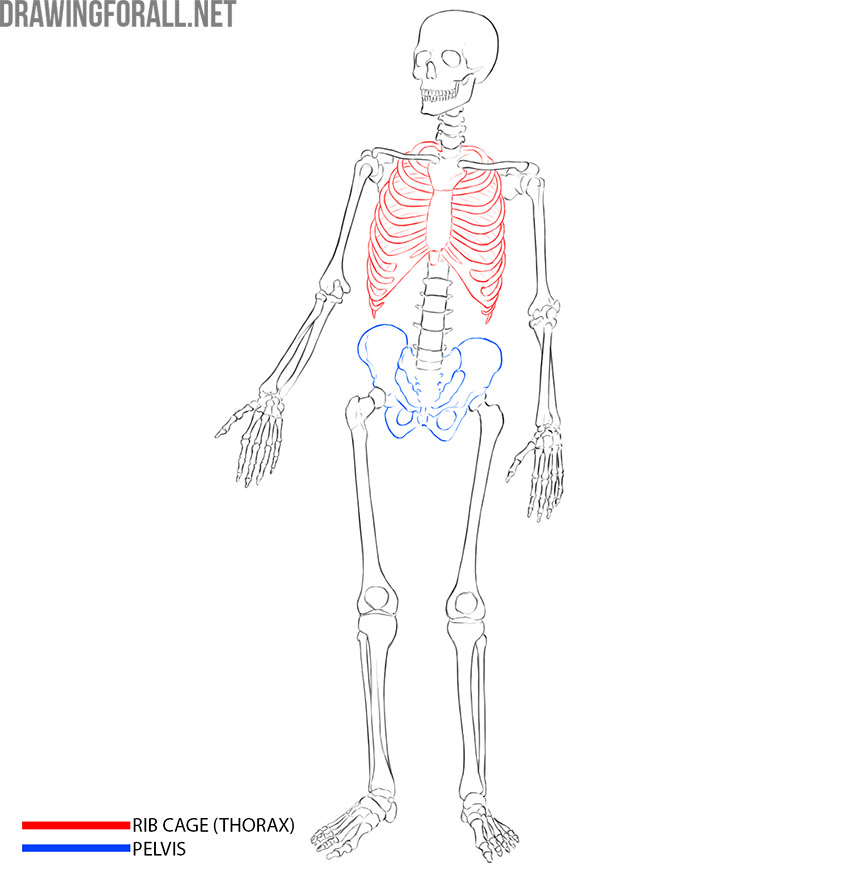 The rib cage protects against damage to such important organs of the chest cavity as the heart, lungs, bronchi, esophagus, and thymus, as well as the largest vessels and important nerve trunks. Finally, this bone structure protects the organs of the upper abdomen, especially the liver.

The rib cage has the appearance of a truncated cone. The upper and lower chest openings are called the superior and inferior apertures. 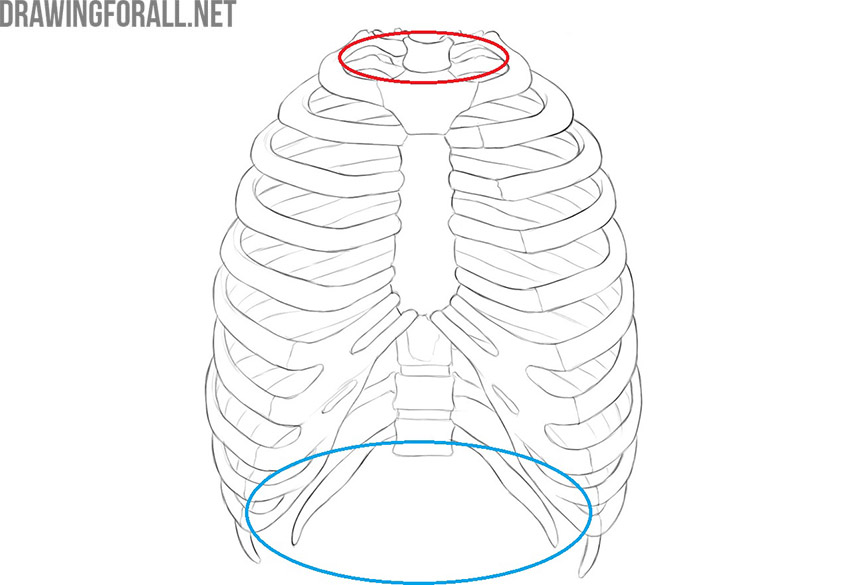 The lower opening of the chest is covered with a diaphragm – a powerful muscle that participates in breathing and separates the chest cavity from the abdomen.

The chest does little more than protect. The elastic joints of the bones of the chest – the ribs and sternum – allow the chest to expand during inhalation and taper during exhalation.

So, the rib cage is formed by the sternum, ribs, and vertebrae of the thoracic spine.

The sternum is a flat, sturdy bone that connects the front ends of the ribs. This is where the sternum is located: 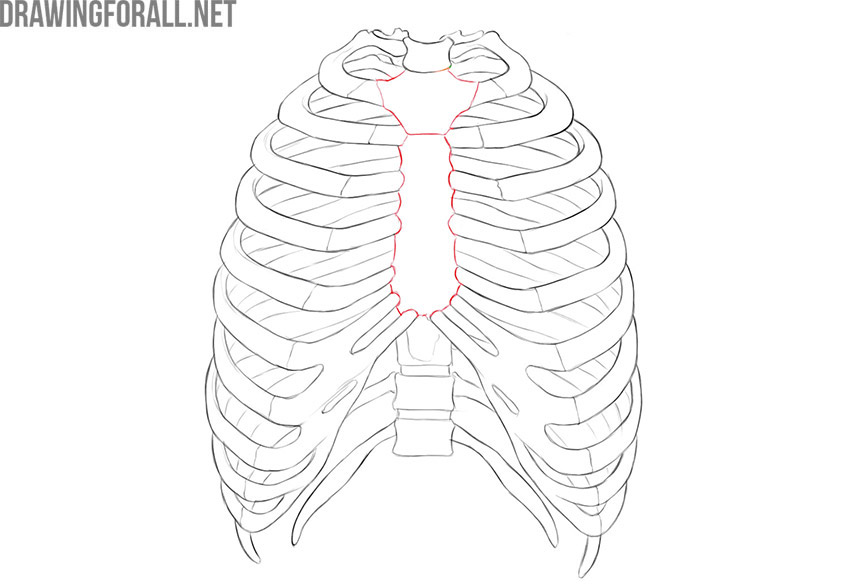 The sternum has a body (corpus sterni), xiphoid process, and manubrium.On the body and hilt of the sternum, there are clippings for connecting with the ribs, which are called rib clippings (incisurae costales).

Also, the sternum is a support and a fixing point for the upper limb, because the sternum connects to the clavicles. You can see clavicular notches (incisura clavicularis) on the manubrium. 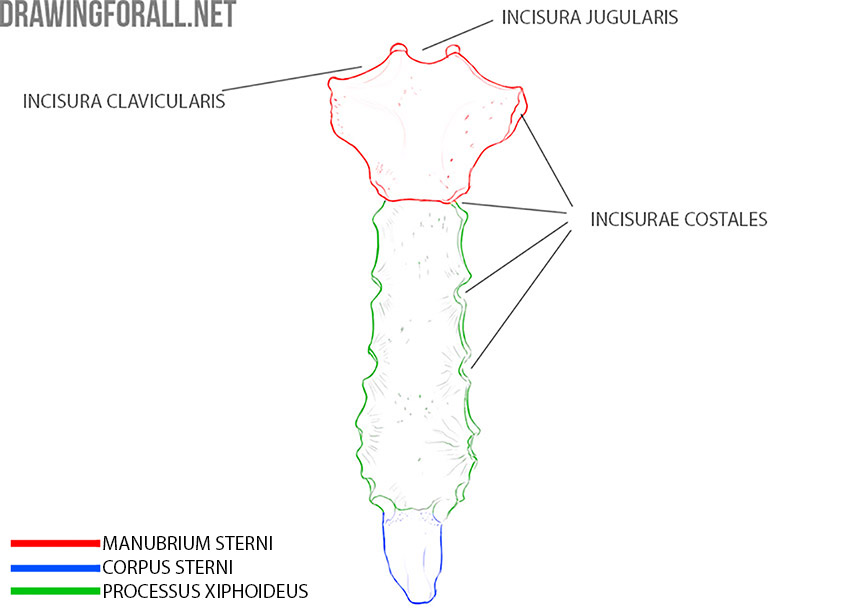 A rib is a flat, curved bone that connects flexibly to the vertebra and sternum. Each person has 12 pairs of ribs. The ribs have a typical structure, except for the first and last two pairs. These ribs differ from the rest of the ribs, first of all, in size and shape. The first two ribs are flatter and smaller. 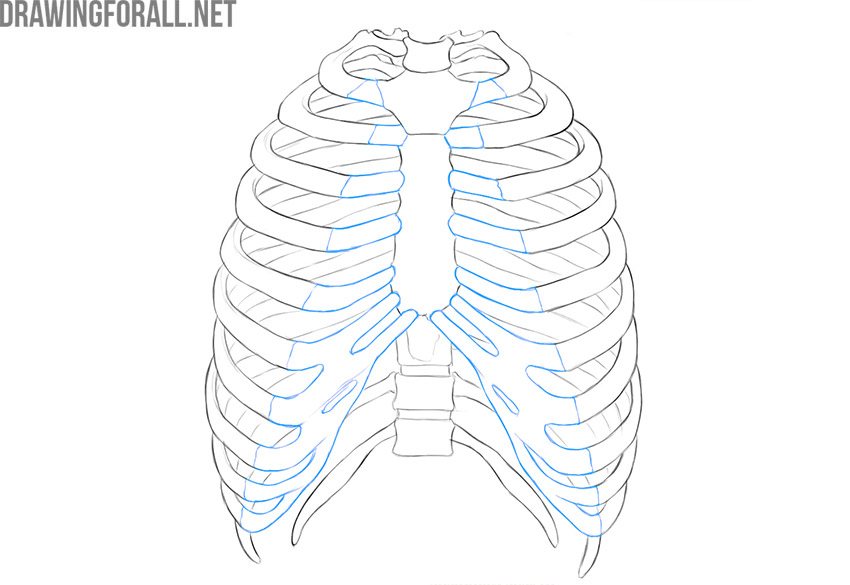 The bony part of the rib has a head (caput costae), neck (collum costae), and body (corpus costae). In fact, in anatomy, almost everything that has a head (i.e. the wide part) goes into the neck (i.e. the narrow part). Each rib is attached to the corresponding vertebrae with the help of the head. 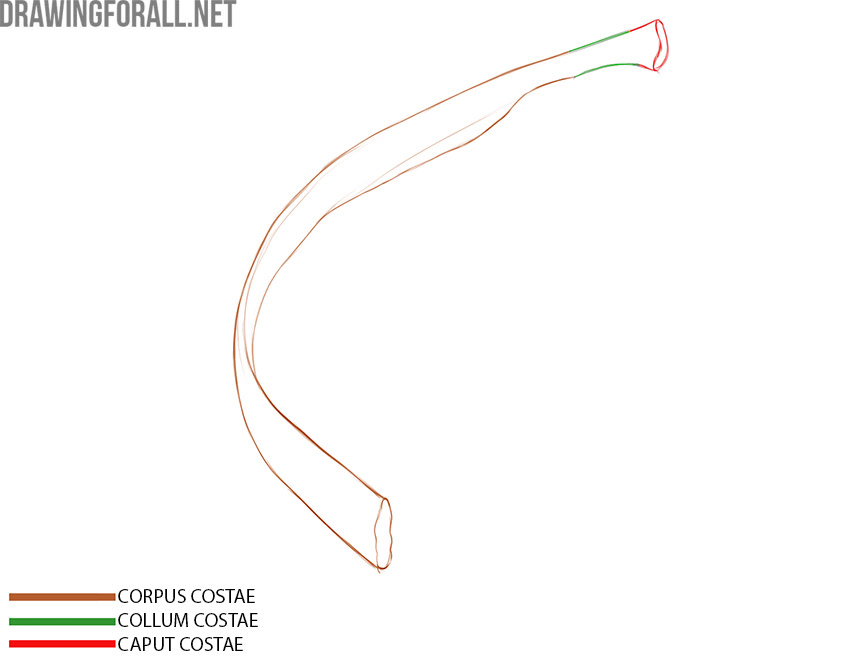 The connection of the lower false ribs with the sternum is called the sternal angle. This is a very important area in plastic anatomy because the size of the sternal angle is one of the indicators of body type.

People with a strong, stocky figure, prone to gaining muscle and fat mass, are called hypersthenics. As a rule, the sternal angle in hypersthenics is much greater than 90 degrees.

Asthenics are tall, thin people. One of the signs of asthenic physique is an acute sternal angle. Accordingly, in normosthenics, the sternal angle is approximately 90 degrees.

Asthenic can gain significant weight, and then we can incorrectly determine the type of his physique, so the sternal angle is a rather valuable indicator of the figure. 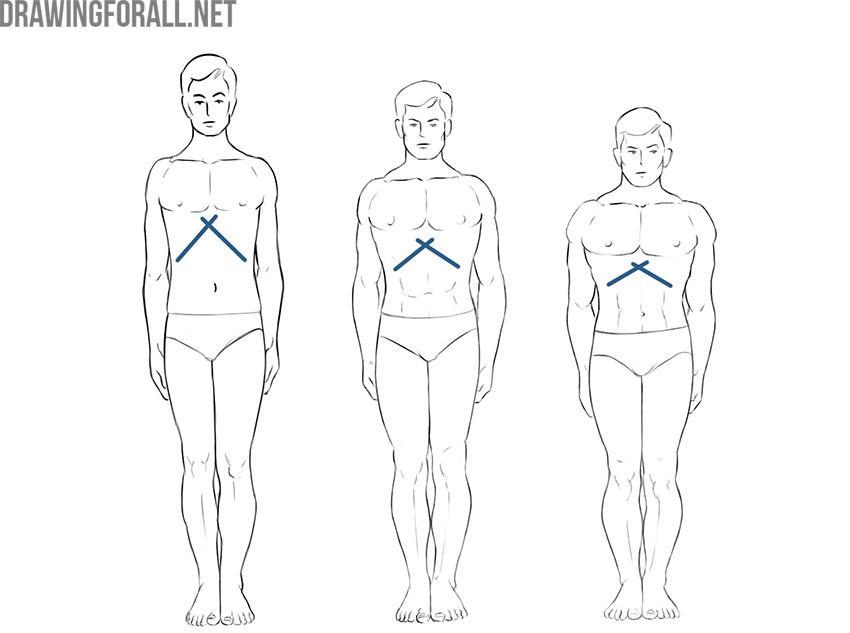 The vertebral column is a reliable bone framework, which is the main supporting element of the whole organism. The human spine has a specific shape due to the directness and vertical position of the head.

The spine consists of 33-34 vertebrae – flat, strong bones that are interspersed with cartilage discs. They are also called intervertebral discs. Fastening the vertebrae through the discs and the presence of additional elements, such as muscles and ligaments, allows this strong bone column to be resilient and elastic, absorbing jumps, shock loads during running, or weight lifting.

The vertebral column is divided into several departments: 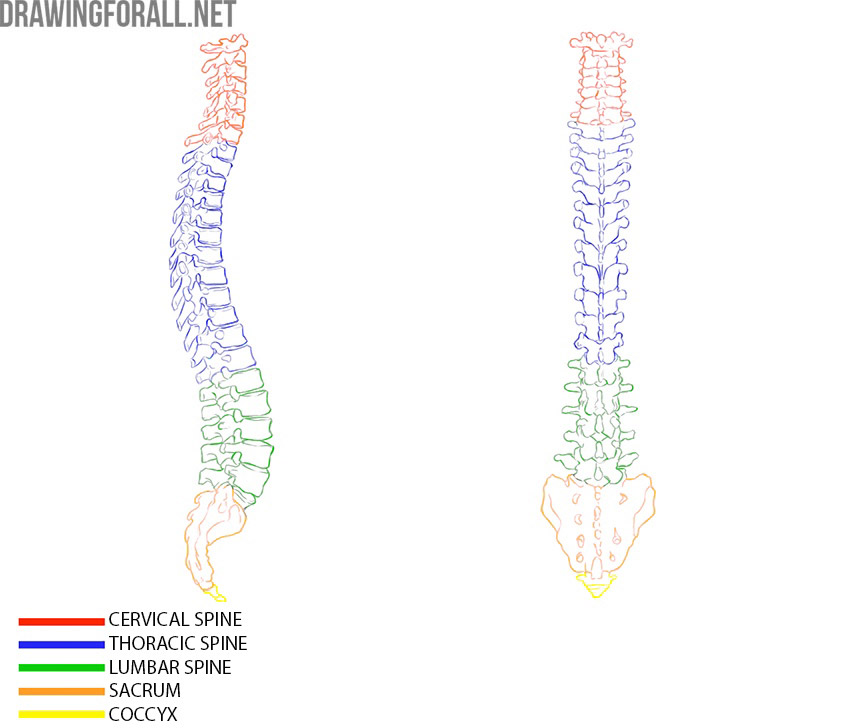 The first bend we see in the cervical region. Here, the spine looks filled forward. Bending the spine forward is called lordosis. You can easily remember this term by association with the word “lord”, because if we slightly increase the lordosis of the cervical spine, our head will proudly throw back.

Even lower, we again see lordosis of the lumbar. At the very bottom of the spine, we see coccyx kyphosis. 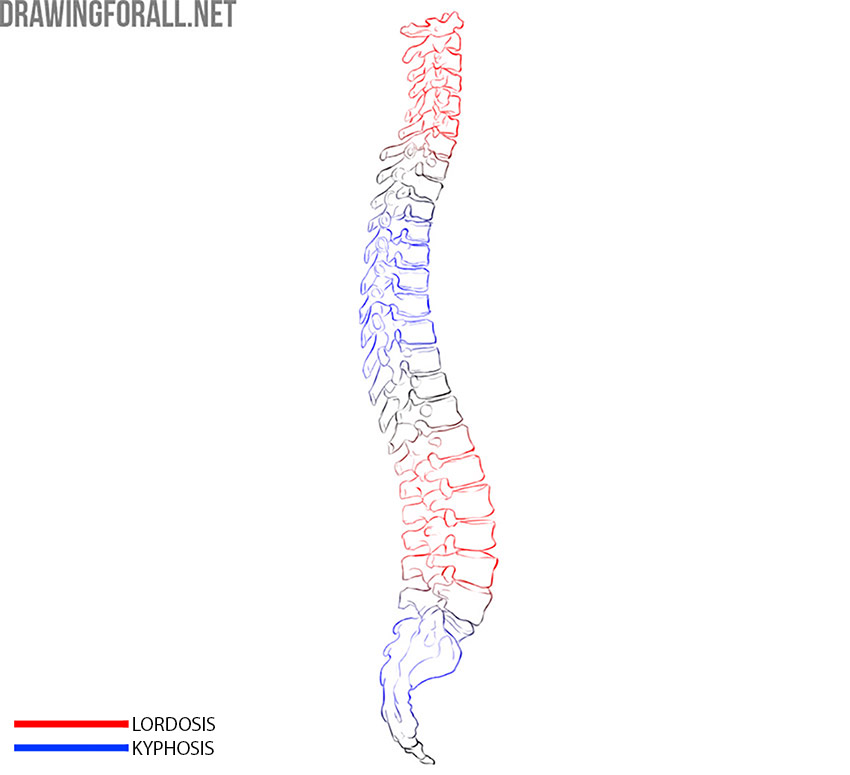 Let’s analyze the structure of a single thoracic vertebra.

The thoracic vertebrae are much more massive than the cervical vertebrae, and as they approach the lumbar region they become larger.

The thoracic vertebra, like the cervical vertebra, has a large dense vertebral body (corpus vertebra) and an arch (arcus vertebra), between which there is a vertebral foramen (foramen vertebra). When the vertebrae are located on top of each other, these holes form a channel in which the spinal cord is located. 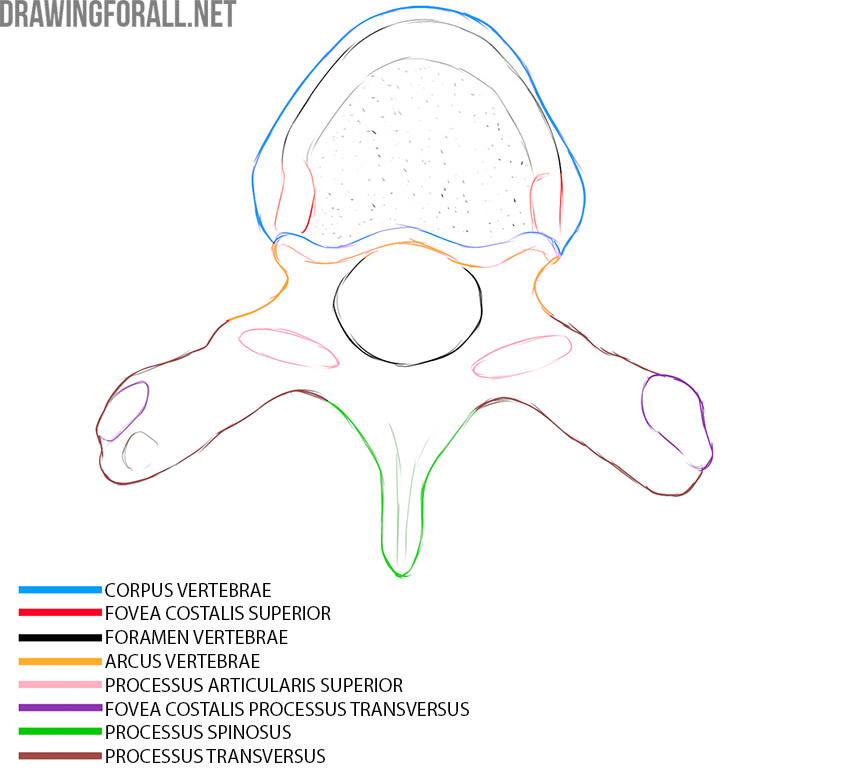 A characteristic feature of the thoracic vertebrae is that they articulate not only with each other, like the rest of the vertebrae, but also with the ribs. Therefore, we can see the areas that are intended for articulation with ribs – rib pits.

On the body of the vertebra from the lateral sides, there are costal fossae – upper and lower (fovea costalis superior/inferior). Each rib is articulated with the lower fossa of the overlying vertebra and the upper fossa of the underlying vertebra, except for the first thoracic vertebra, which is articulated with the first rib as a whole and with half the head of the second rib of the lower fossa. Also, 11 and 12 vertebrae have only one rib fossa. 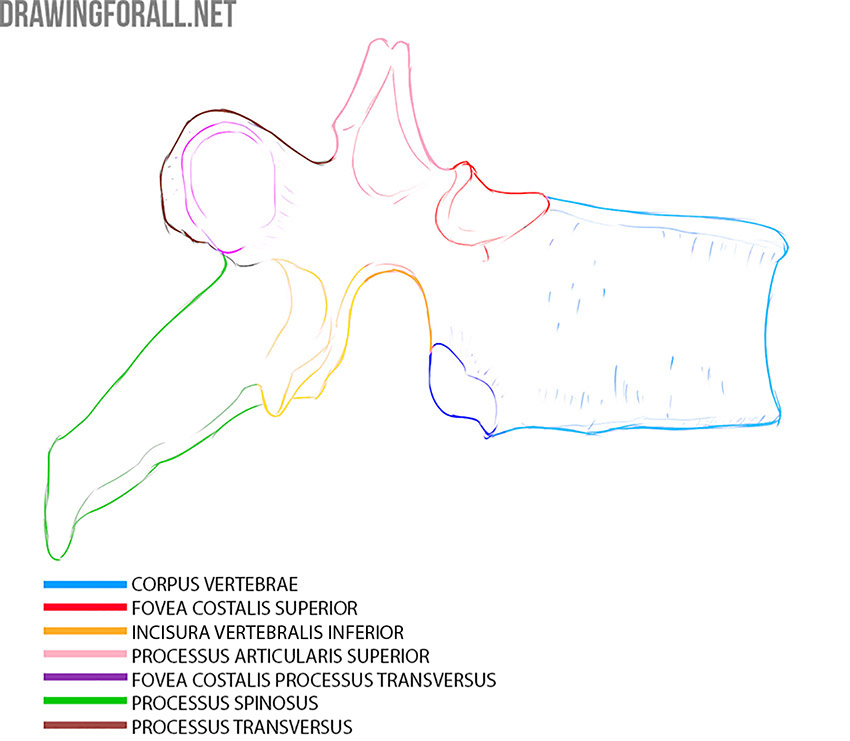 In addition, the ribs articulate are connected with the costal fossae of the articular processes (fovea costalis processus transversus). 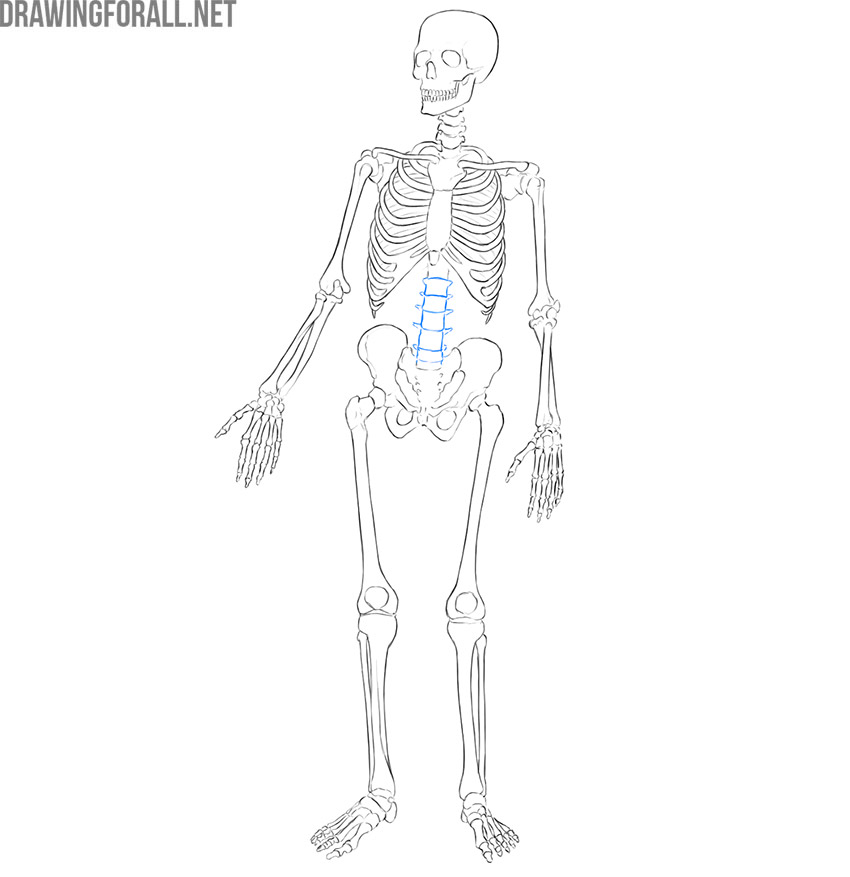 You can compare the sizes of the cervical, thoracic and lumbar vertebrae: 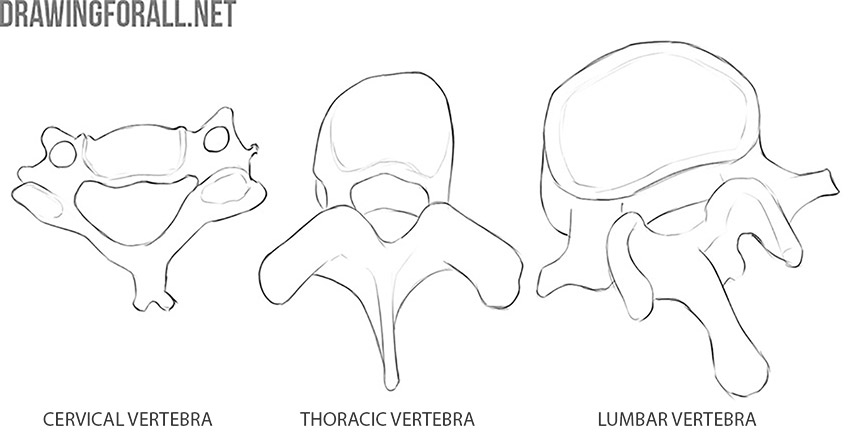 The spinous process (processus spinosus) here is also in place, but it is very short, thickened, and rounded in comparison with the spinous processes of the thoracic and cervical vertebrae. 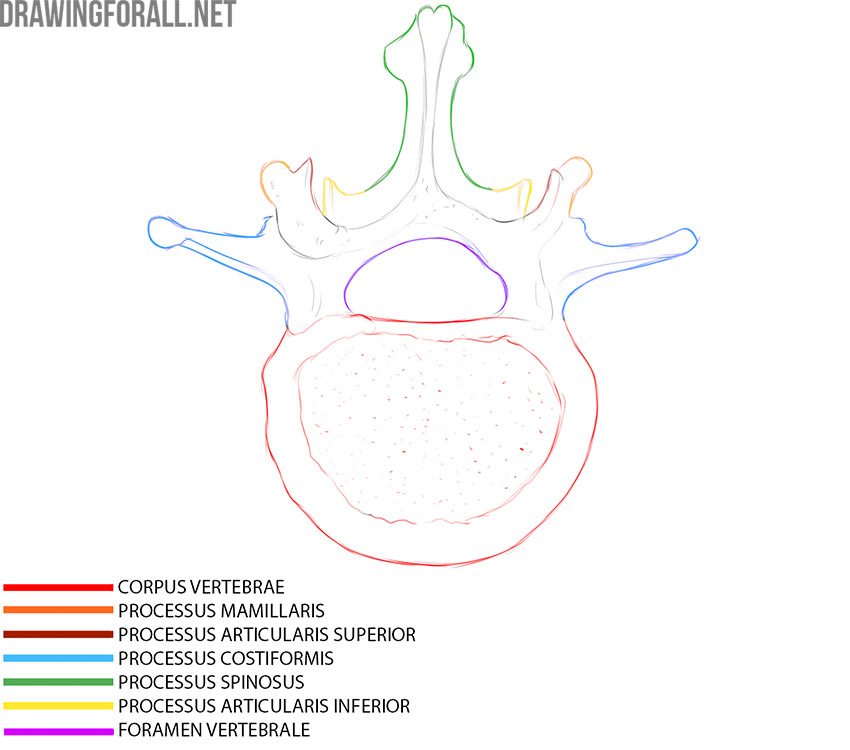 Upper and lower articular processes (processus articularis superior/inferior) extend up and down from the vertebral arch. With the help of these processes, the overlying and underlying vertebrae are articulated.

However, we do not see here full transverse processes. Instead, small rib processes (processus costiformis) are located laterally, which are the rudiments of the ribs. 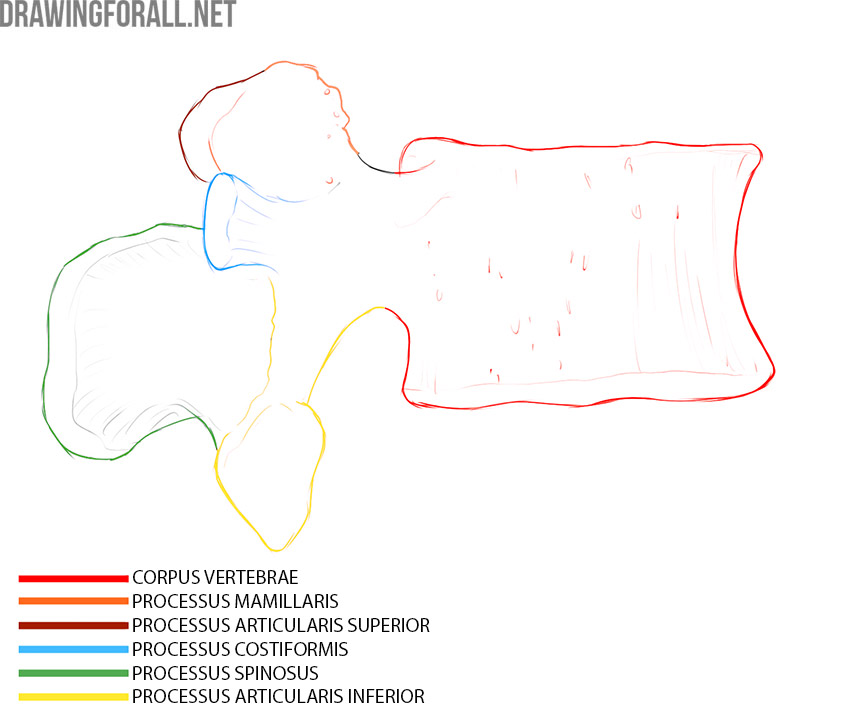 The skeleton of the trunk is also represented by the pelvic bones, which are the support for the bony part of the trunk. The pelvic bones will be discussed separately in the article about the anatomy of the lower limbs.

In fact, drawing a skeleton is a very difficult task. A common mistake of aspiring artists is excessive attention to small details against the backdrop of serious problems with basic shapes. Try to learn how to sketch the shape of the ribcage and spine in general terms. Avoid detailing that is not needed at the beginning of the skeleton drawing study. Start drawing the spinous processes or costal cartilage only after you feel confident in drawing the basic shapes.