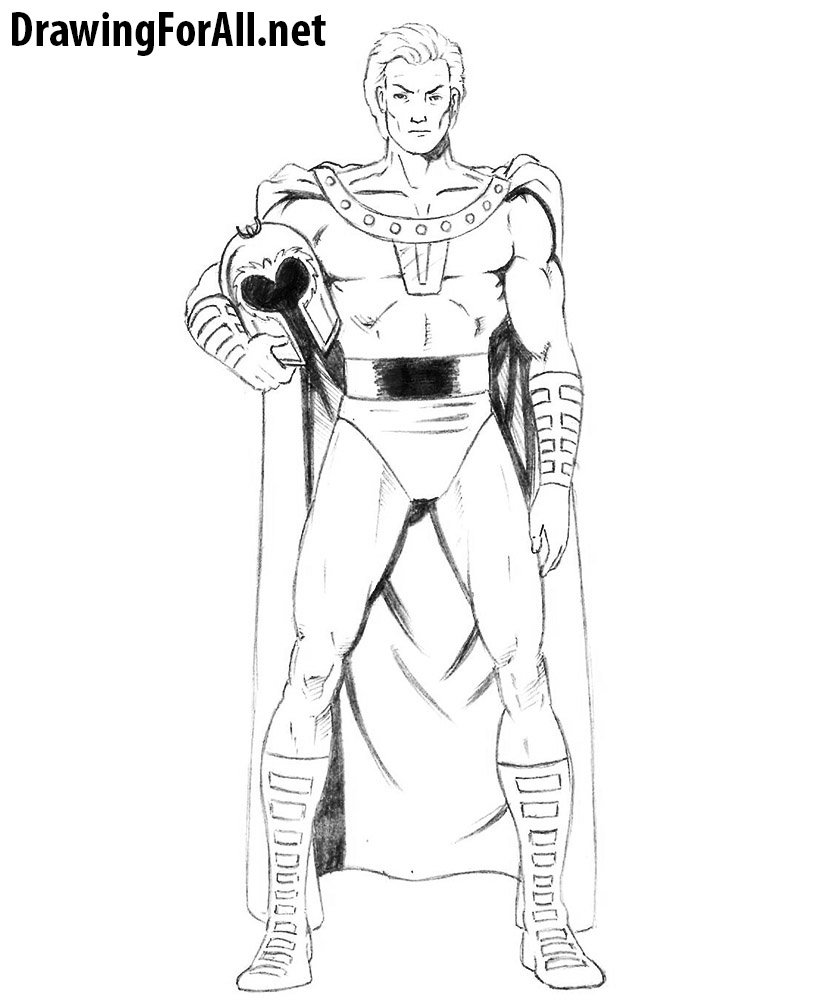 Hello, dear readers of DrawingForAll! Today we draw the greatest fictional villain of all time. In this drawing lesson we will show how to draw Magneto. Erik Magnus Lensher, one of the central characters in stories about the X-Men, was established in 1963. Since then he becomes the main antagonist of the stories, as it were, for example, in a lot of parts of the movies about the X-Men.

This lesson will be difficult, but interesting. At first we need to choose the pose of our character. In our example Magneto stands straight and holds his helmet in his arms. Then we start drawing with a stickman of Magneto. Here, everything is standard: the growth is equal to the sum of the lengths of the seven heads.

As always we draw the figure from top down. So first we draw the head in a shape of an oval and then other parts of body using simple lines. 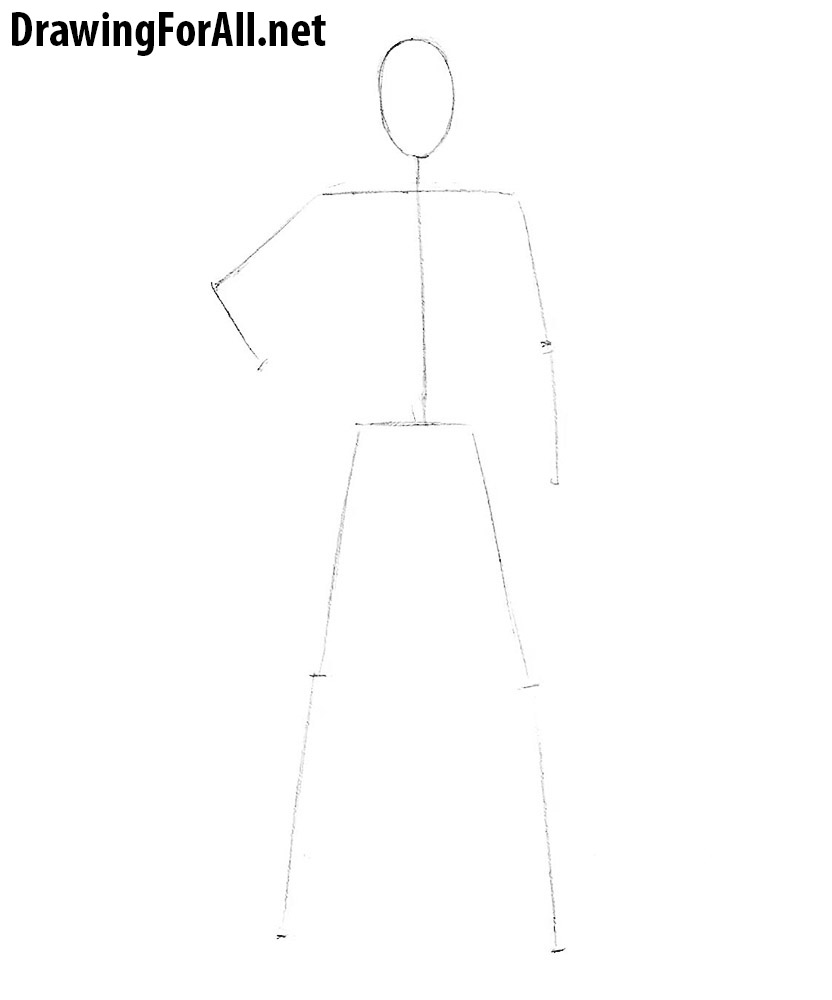 First in this step draw a line of symmetry of the face (it is vertical) and the horizontal line of the eyes. Above the eye line outline the line of hair and below the eye line draw nose and mouth lines.

and helmet. Sketch out the pelvis in the shape of a triangle. Then proceed to the legs, which should be drawn with the same method as arms. 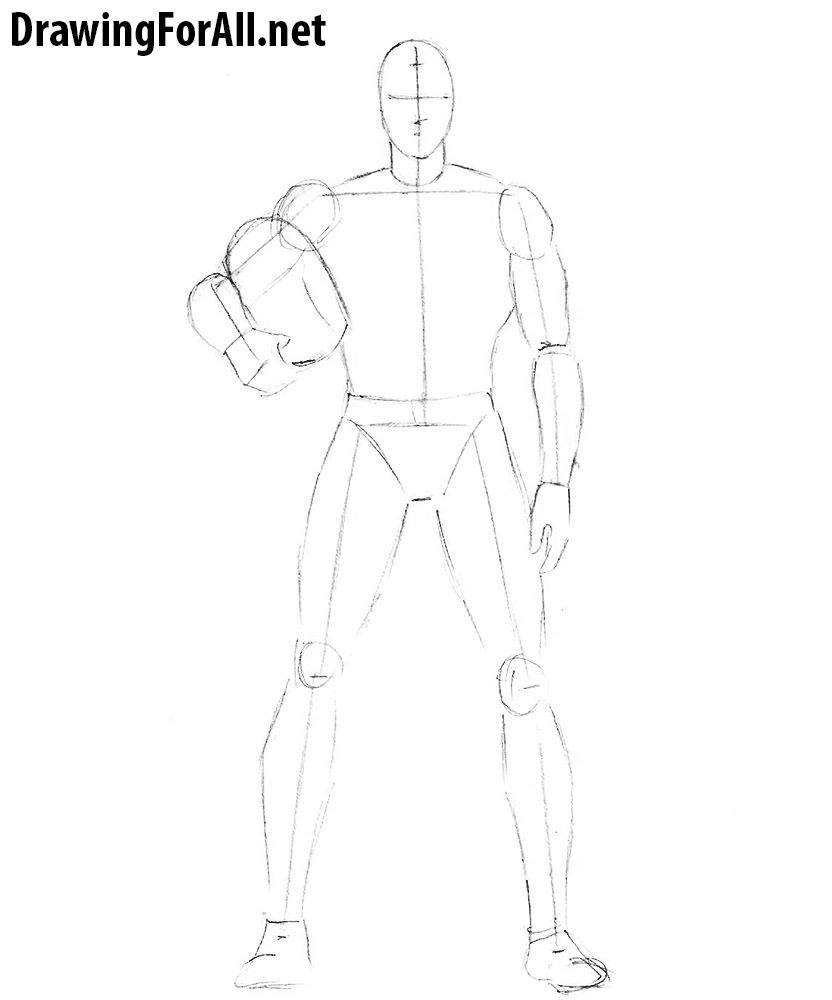 In the fourth phase we outline strokes in which we will add details to the face. First we outline the eyes and gently curving eyebrows. Then we outline the ears and nose. However, in our lesson about Magneto you can see the difference – it’s not a bug, just our hero tilted his head slightly.

Then we proceed to the hair. More precisely, the shape of hair. Use smooth lines, be sure to leave an open high forehead. Just do not forget to draw the shape of the jaw and draw lines of the cheekbones. 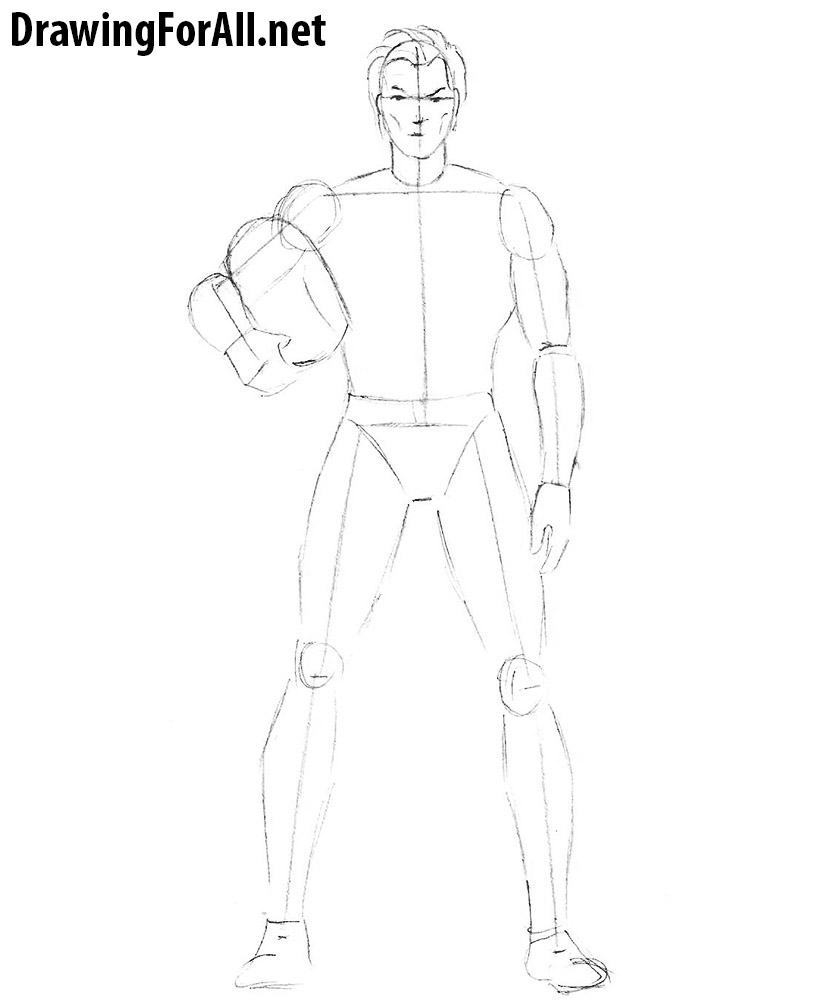 We continue to draw Magneto. Now draw the face of the leader of Brotherhood of Mutants in the details. We stopped in the previous step on hair – now we start with them.

We have contours of hair of Magneto, you now need to draw the texture of hair themselves. Use gentle, short lines (note they are interrupted and do not go from the edge to the edge). Hair lines should be drawn in the direction from the roots to the tips. Next, draw the contours of the eyes, if necessary, adjust the pupils.

At the end of stage draw the ears, wash extra guidelines and clean the entire area over which we have worked. 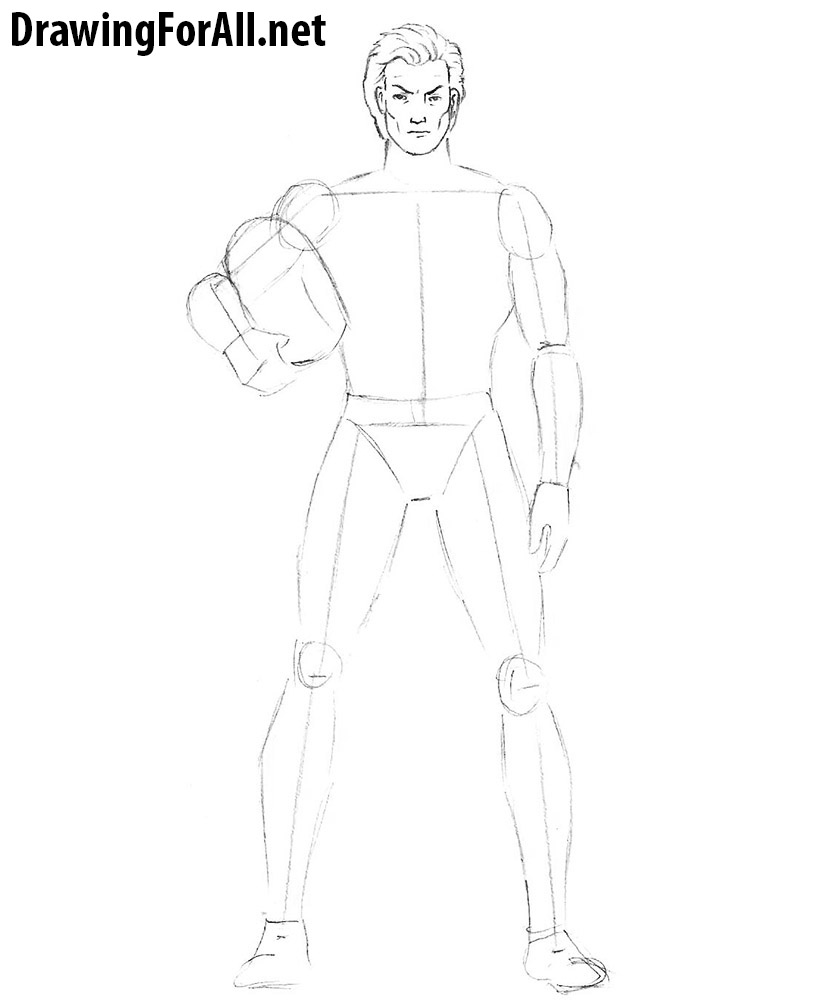 The torso and the mantle – this is what we will draw in this step. Just below the collarbone draw an arc with a fairly high degree of curvature, which is to go up to the shoulders. Next, draw the top edge of the cape, which Is located directly behind the shoulders. 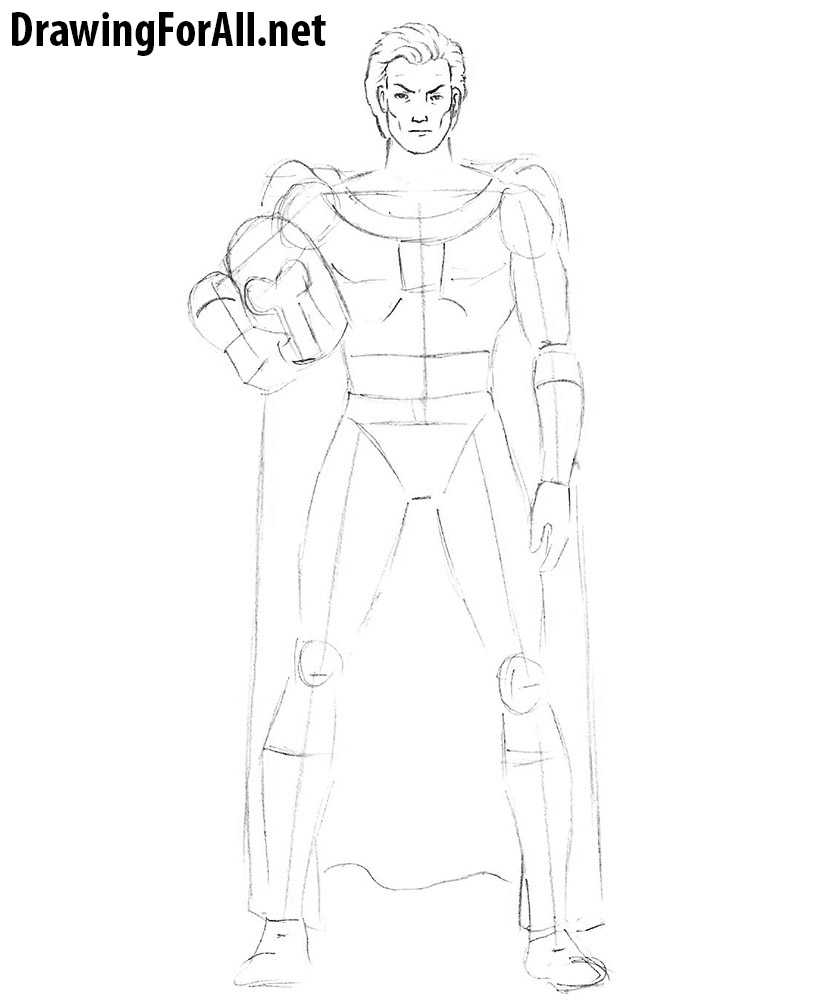 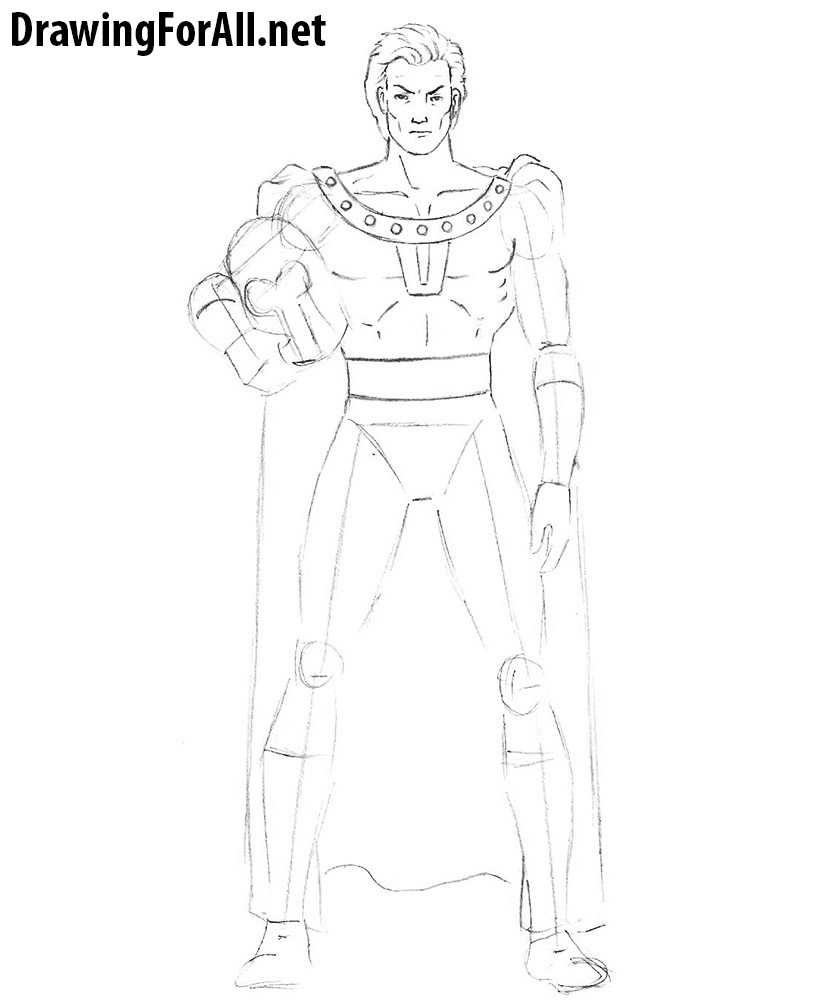 Now a pretty simple step of the tutorial on how to draw Magneto. Using curved lines connect the pieces from the first steps, to draw a final shape of muscles. First, draw the contours of the shoulders, biceps, triceps and forearms. Erase the extra lines with the hands and helmet and draw out the contours. Carefully draw the outlines of the fingers and the opening of the helmet. 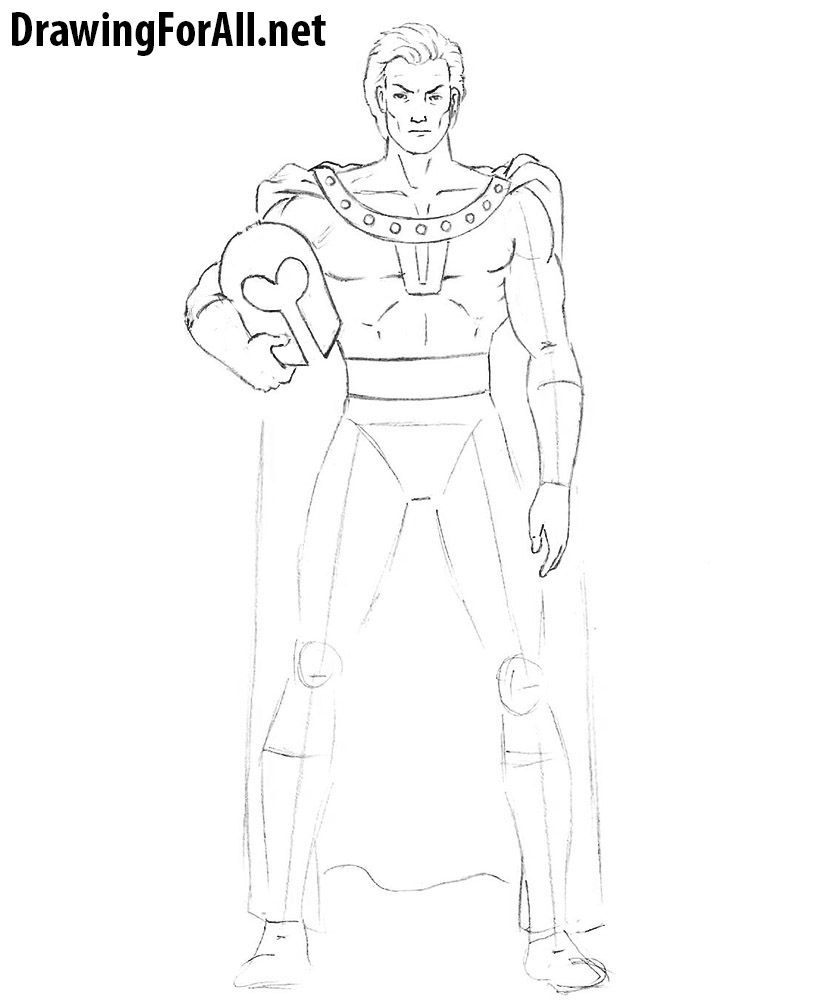 At this stage we finish working with the upper part of Magneto’s body. First, remove all the rough lines of the first steps. Then draw lines of the muscles. Draw decorations on the helmet which are located around the opening and on the top. Note that in our example we draw classic Magneto, which you can see in the old comics. But of course you can draw him any other way, such as in the movies about the X-Men. 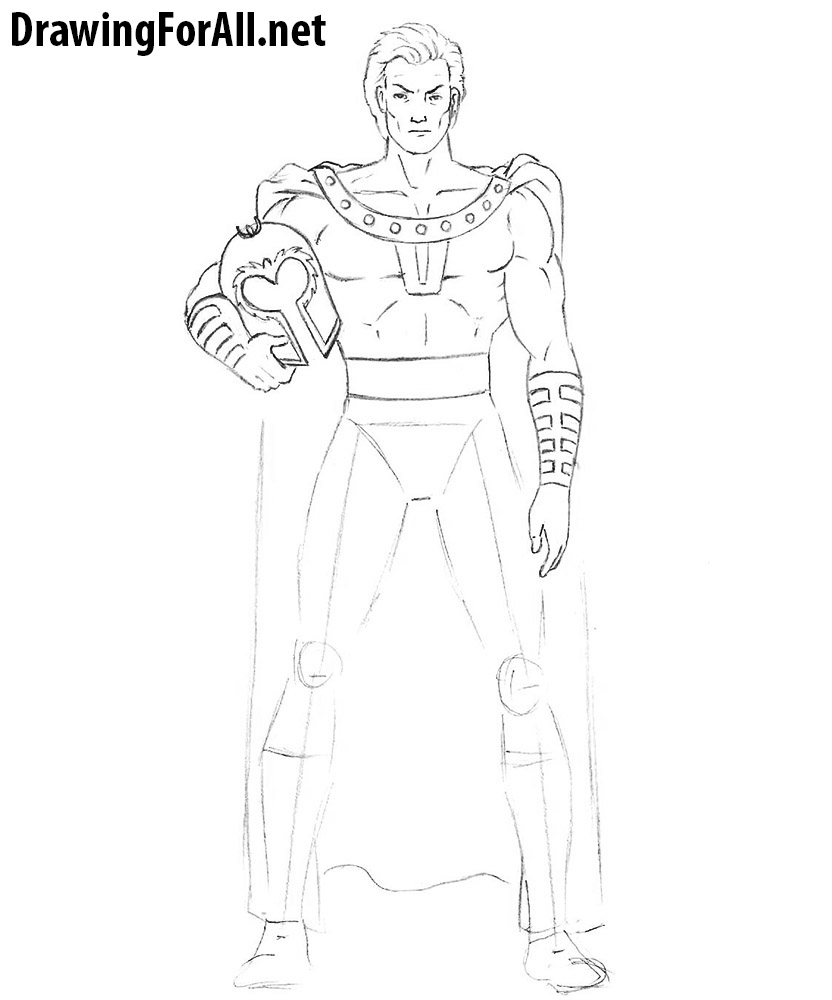 Now we should do the same actions that we did in the step 7. With smooth lines connect the pieces that make up the legs. As you can see, here we draw leg muscles such as the quadriceps and calf muscles. Do not forget to sketch out knees and draw the foot, as well as sketch out shorts. By the way, write in the comments why comic characters wear underwear over the pants. 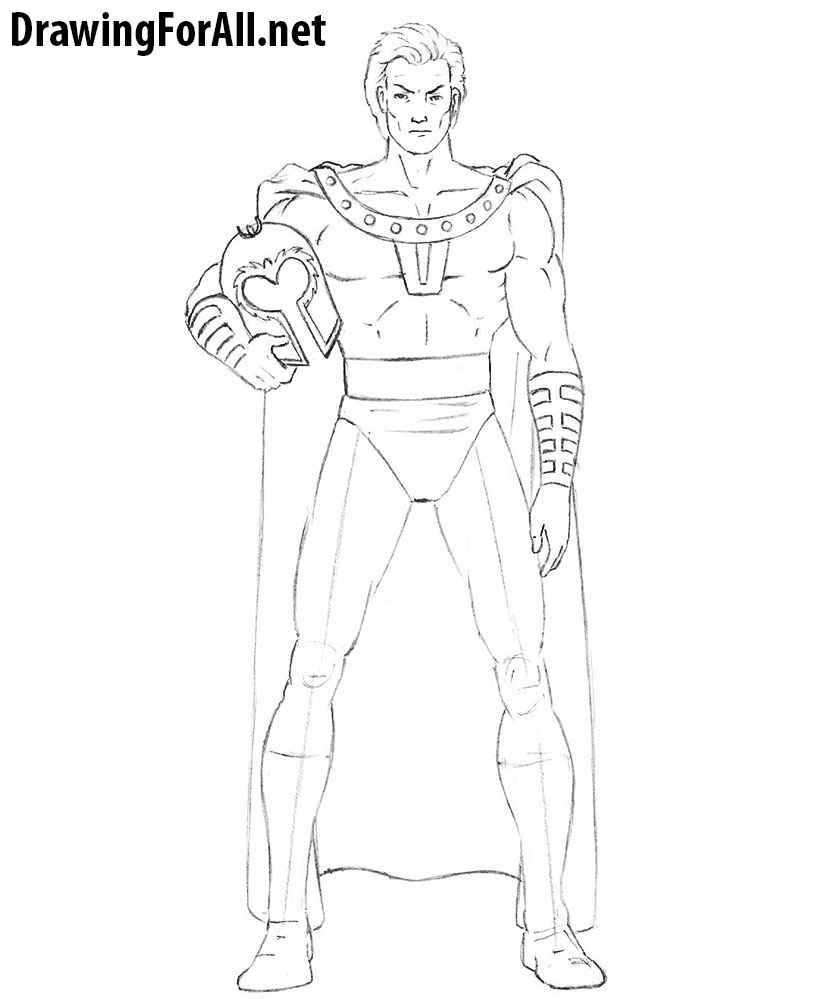 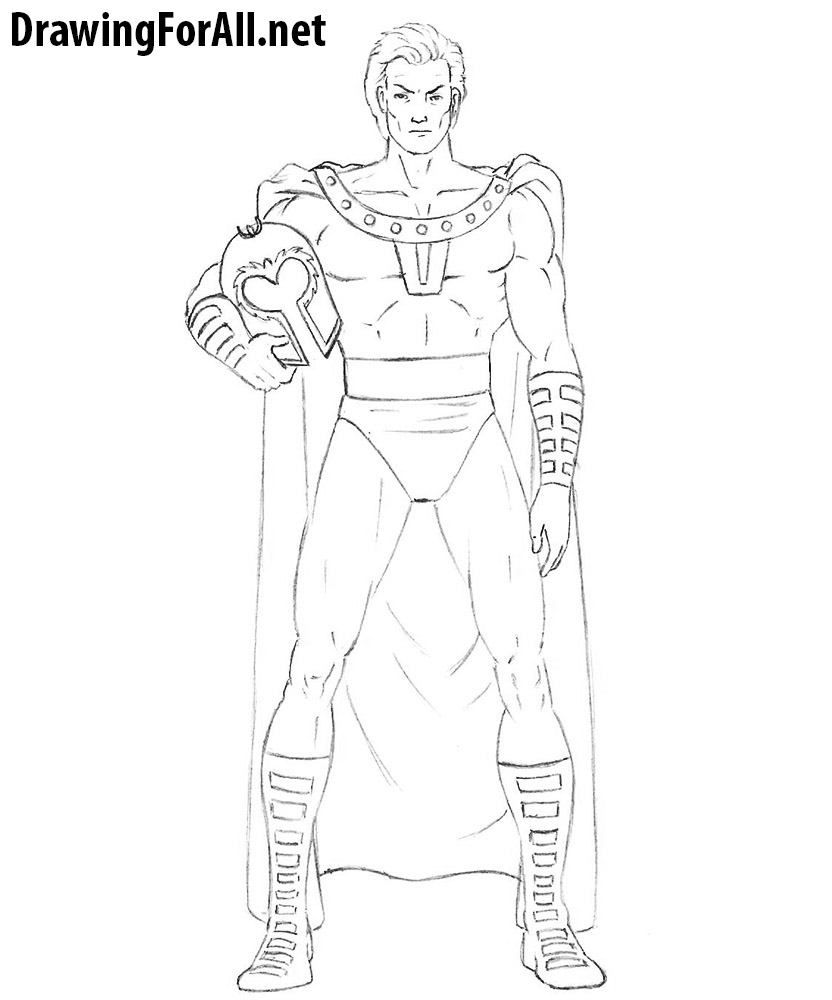 The lesson on how to draw Magneto gradually coming to an end. And now we on the final stage, in which we add shadows. As in other lessons in comics style (see, for example, drawing lessons about Wolverine and Spider-Man), shadows here should be applied in two stages – first outline the contours of shadows and then thickly paint over within. Halftone are adding with light hatching.

Do you like this drawing a lesson on how to draw Magneto? If yes, do not forget to share it, subscribe to our social networks and write your wishes in the comments.