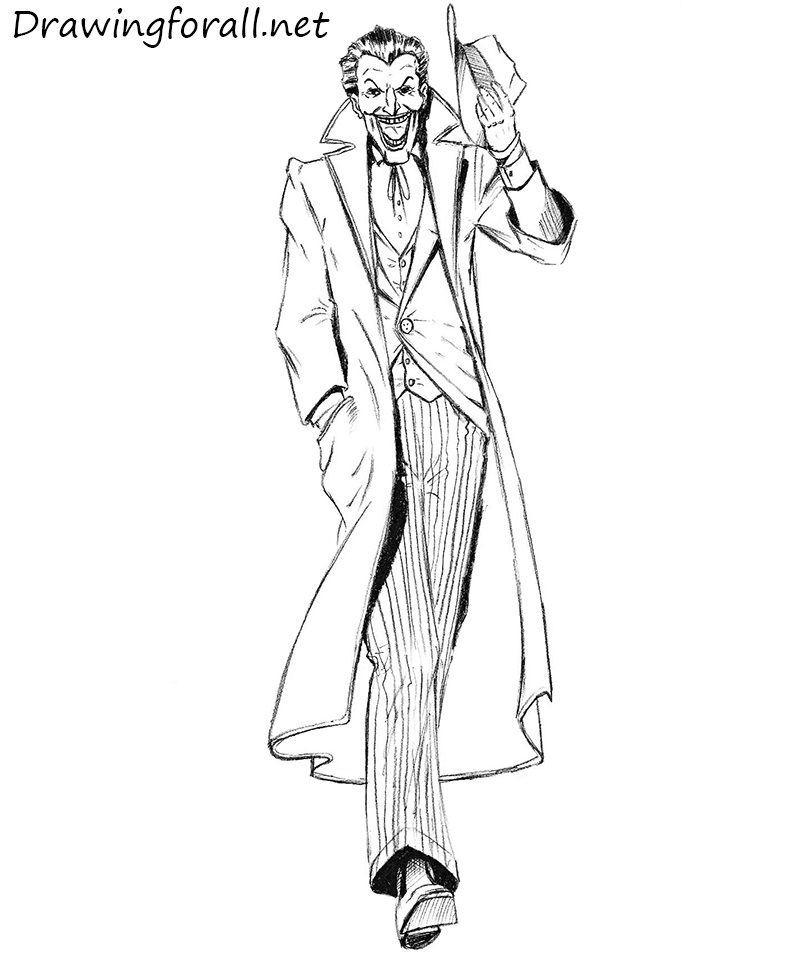 Hello! Today we will draw one of the most charismatic comic book villains of all time. So today we have prepared for you a new drawing lesson in which we will draw Joker – the most frightening and terrible enemy of Batman.

He first appeared in the comics back in the 1940s. Since then, his appearance has changed little. But be that as it may, in this tutorial we will show the most classic version of this crazy villain. So, let’s start the lesson, and learn how to draw Joker. 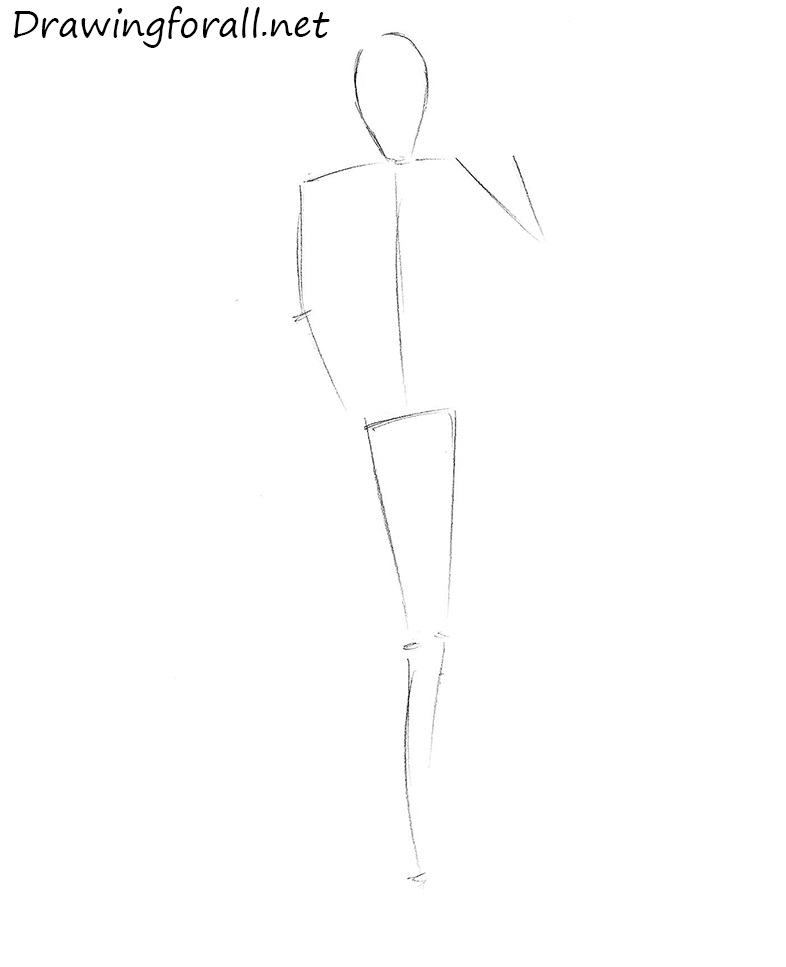 Let’s give some volume to the body of Joke, but first, mark up the face. Draw a vertical line of symmetry of the face, the horizontal line of the eyes, eerie silhouette of smile and hair contours.

Then outline the limbs and trunk of stickman using rectangles and ovals, as in our sample. Be guided by the lines from the previous step, but do not forget that in the previous stage we are not drew the hands and feet. All actions are very similar to one of the stages of the lesson on how to draw Slenderman 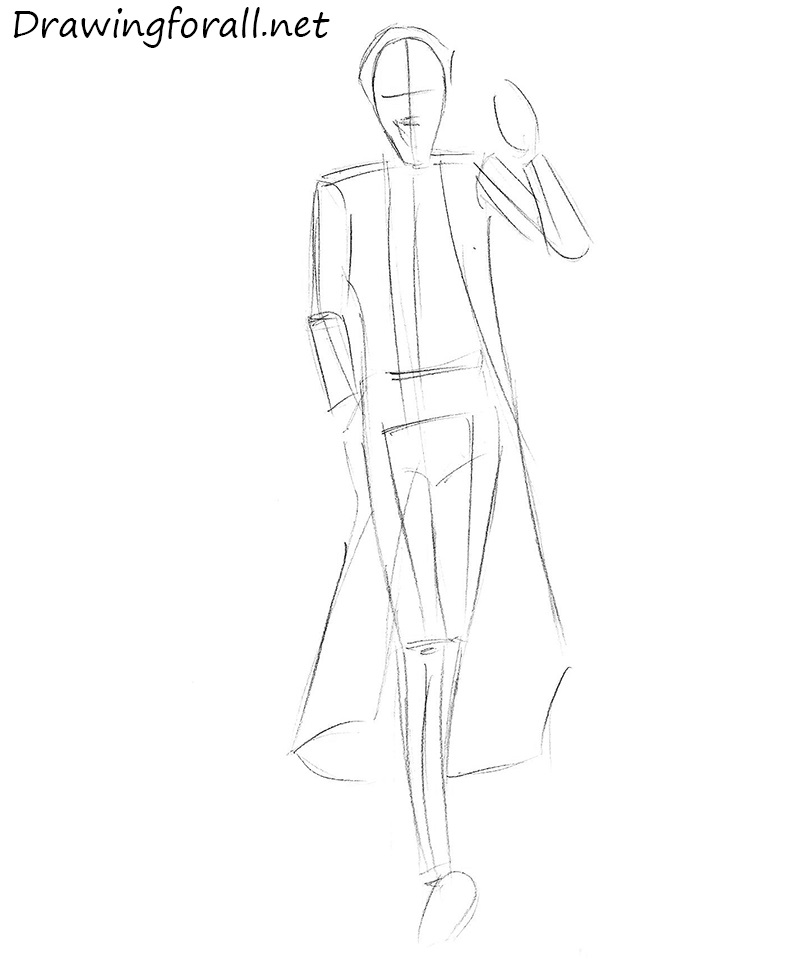 Draw raised collar of the coat, sketch out the hairstyles. In the same step we outline the contours of eyebrows and lips (they look like smooth, curved lines that converge in a conditional point between the eyes). Outline the ears and nose, draw a hat, which our hero gallantly takes to greet someone. 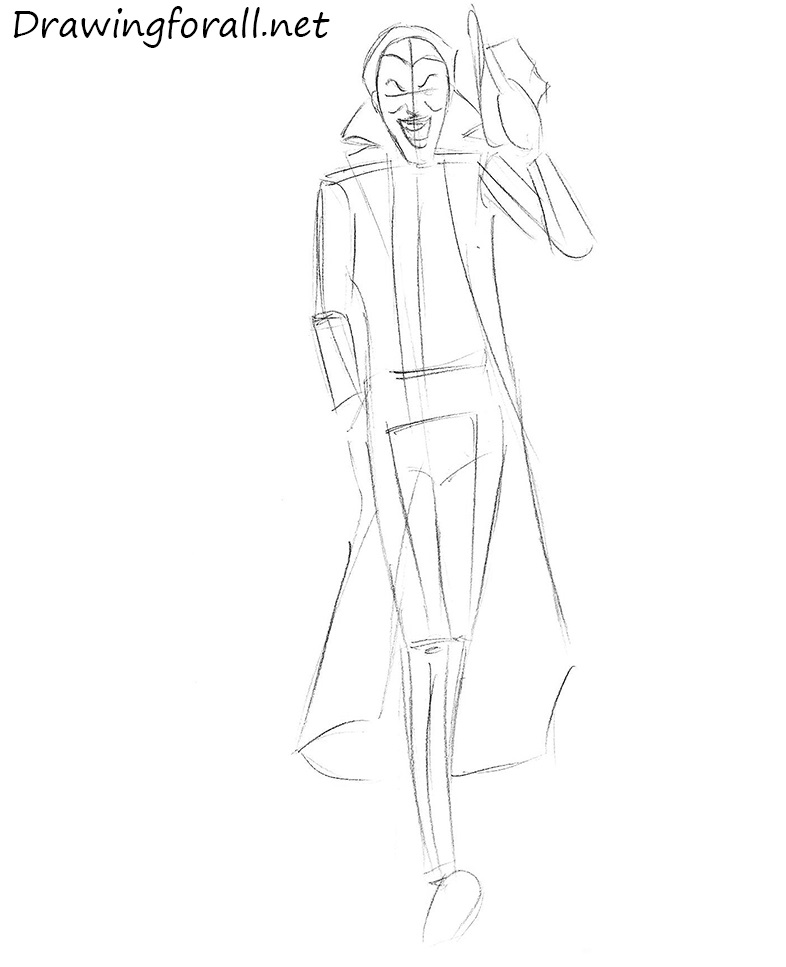 Using guidelines from the previous steps draw the face. Speaking of hairstyle, we note that it should be drawn in the direction of the hair roots to the tips. When you will draw the eyes, do not forget the wrinkles located in their corners – they perfectly capture the tension of the face, which occurs during an unnatural smile.

Also, draw a large, pointed nose and ears, do not forget the rule of proportions – the tip of the nose should be in the same plane with the lower tips of ears. Draw the mouth curved in an unnatural smile. And don’t forget to draw the wrinkles around the mouth. 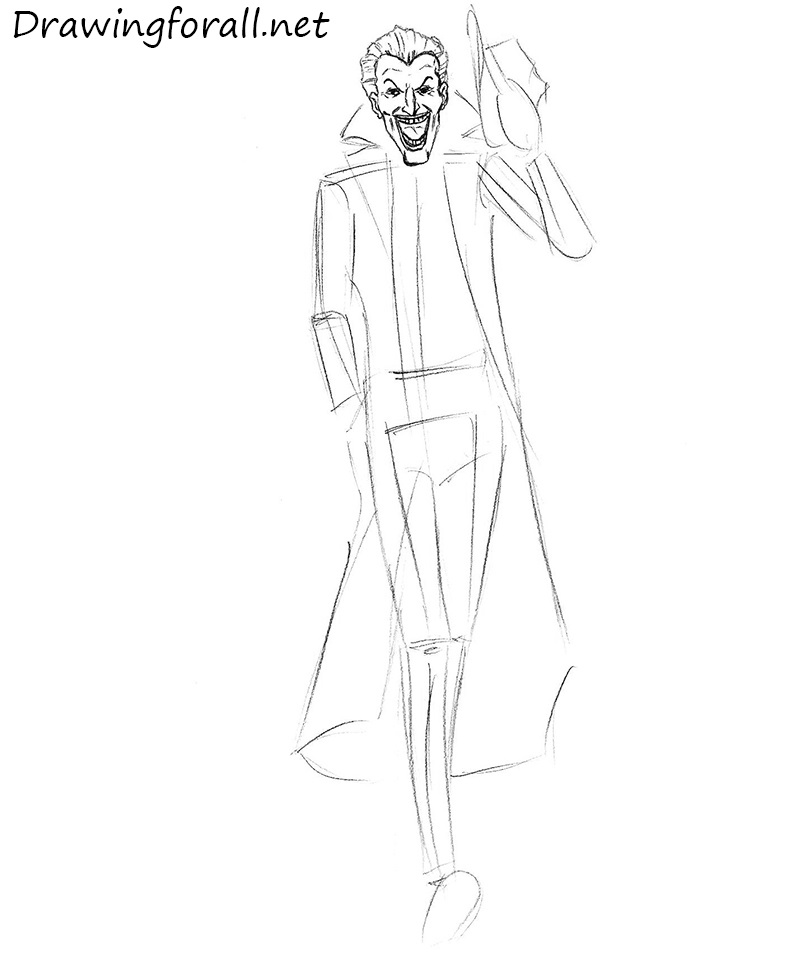 Erase the excess line from the coat and circle the lines. Pay attention to the strong expansion of the sleeves. We recommend at first outline the silhouettes of pocket, circle the flaps of the coat in the trunk, and then add the creases. The main place of their location – is the elbow bend and pocket. Use smooth lines to draw the folds. 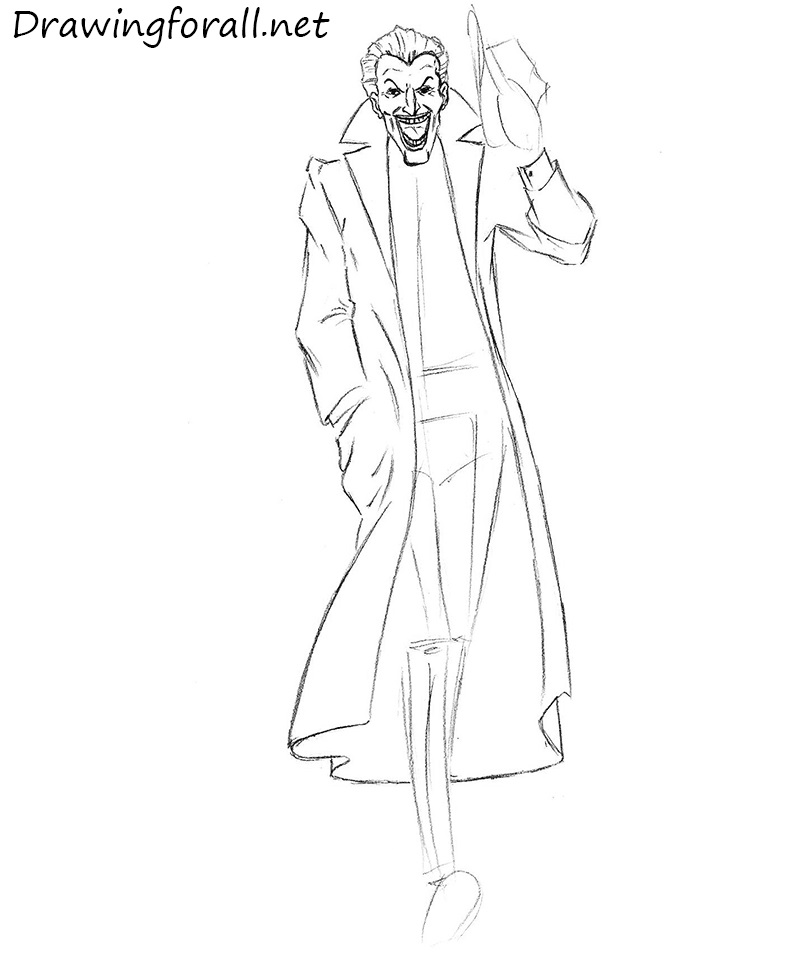 It’s time to draw at first sight is not very noticeable, but very important details. Draw seams on the coat as in our example. Using smooth lines draw the hat. Also, draw the hand gloved. Draw the outlines of knuckles and tendon on the hand. 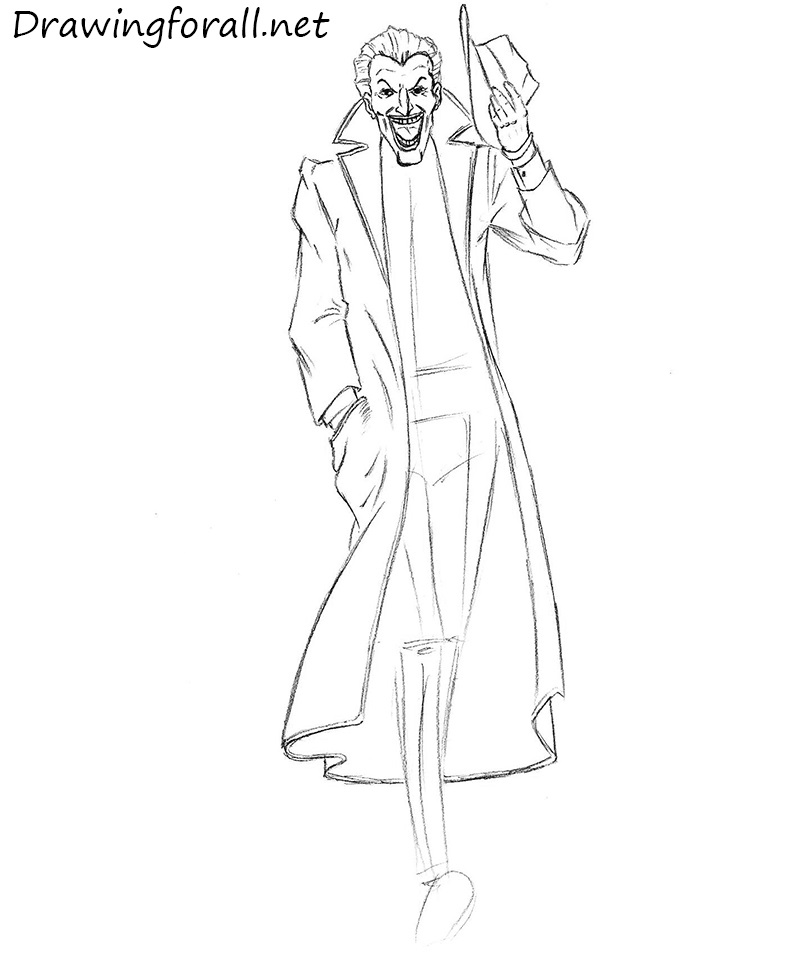 This step seems complicated, but it just needs a good make out. We can see several layers of clothing on Joker – the cloak, beneath it – a jacket, then – vest, then – shirt. We need to draw all the clothes in the direction from outside to inside, ie first draw the coat, buttoned on one large button (note the creases that extend from it), and then – a waistcoat and shirt.

About details – draw the tie and buttons, also add some folds in the areas of compression of fabric. 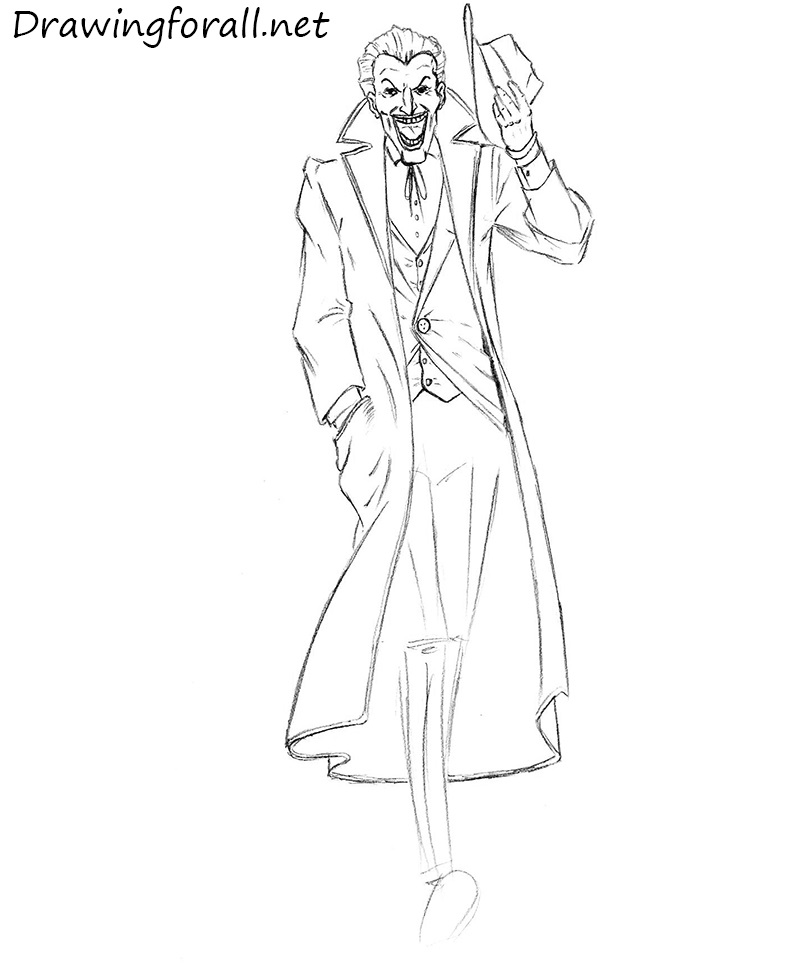 Erase extra guidelines from legs of Joker and circle their contours. Using some straight lines draw the folds. Draw the sole of the shoe – visible lower part of it consists of a large trapezoid and a small semi-circle. 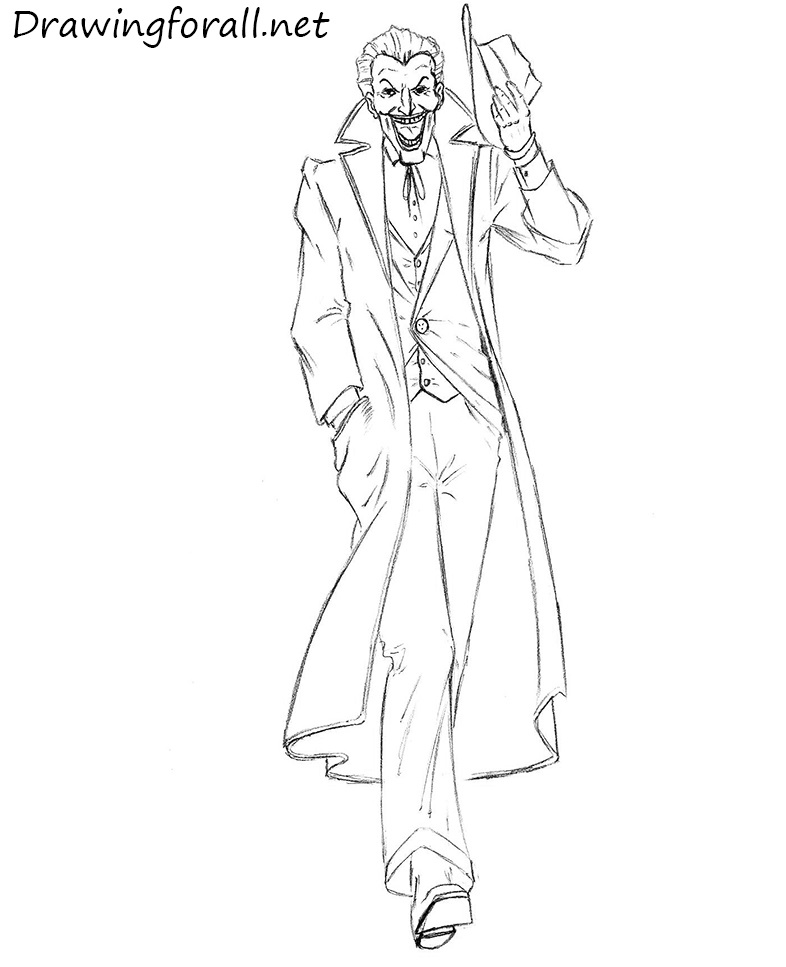 With long lines, draw stripes on the pants. Shadows in today’s drawing made in the comics style, which means that they are contrasting and catchy. Best to add them in two stages – first outline the contours of the shadows, and then cover it by tight, intense shading.