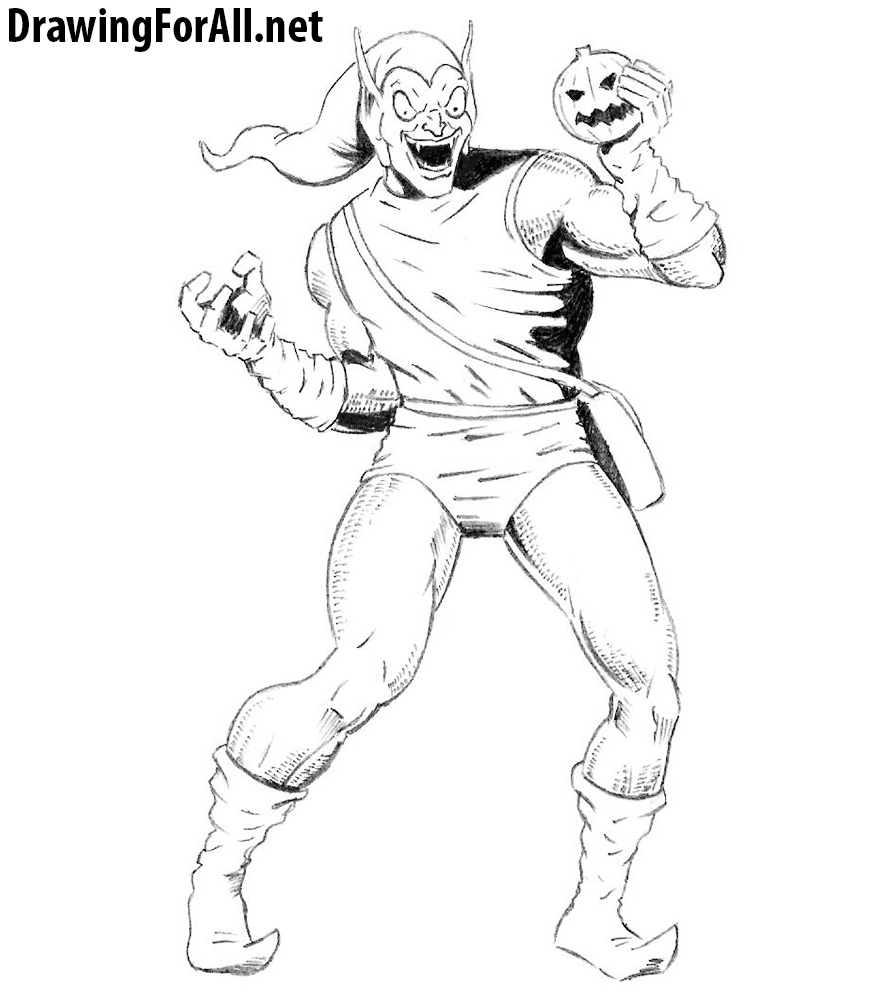 Hello! We decided to draw the classic Green Goblin. First, because it is the classic and the Golden Age of comics, and it rocks. Secondly, we already have the Green Goblin, but with very unusual appearance – as we saw him in Ultimate Spider-Man. 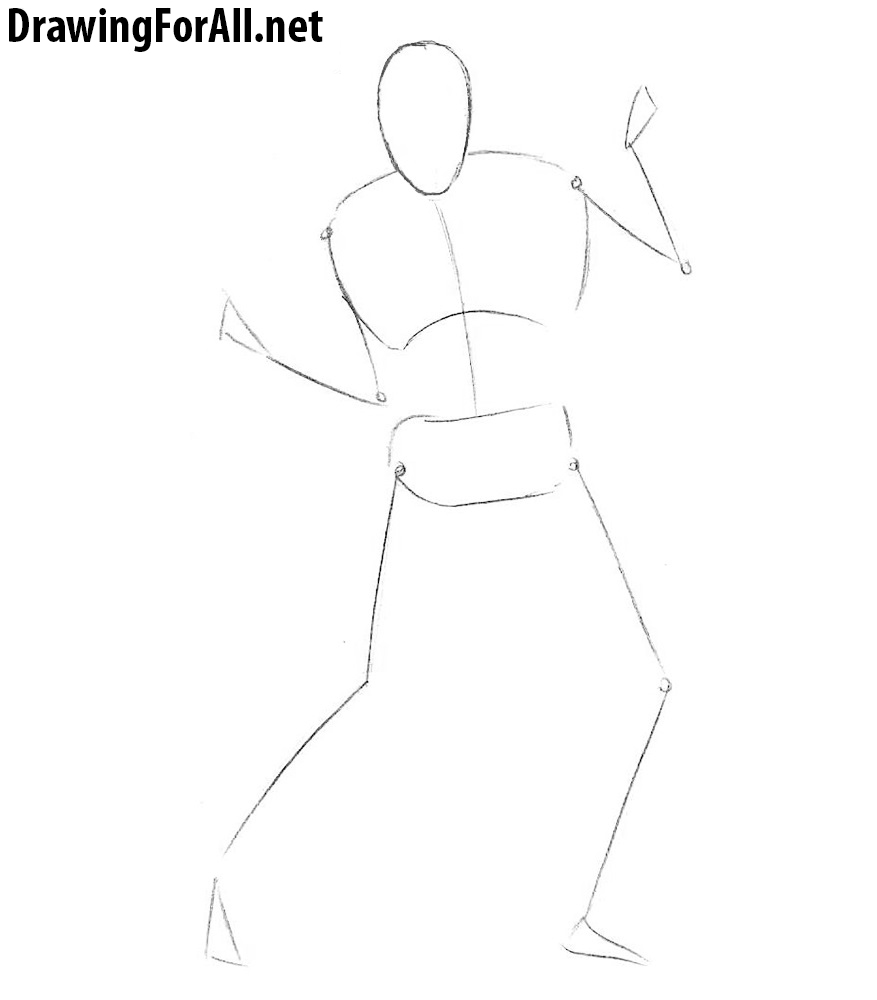 In this step we add volume to the body Green Goblin. But first draw the lines of the facial symmetry, which will help us to draw facial features. Connect the chest and pelvis. Draw the shoulders, elbows and knees using circles. Draw arms and legs using modified cylindrical shapes. In the same step give hands and feet more right form. 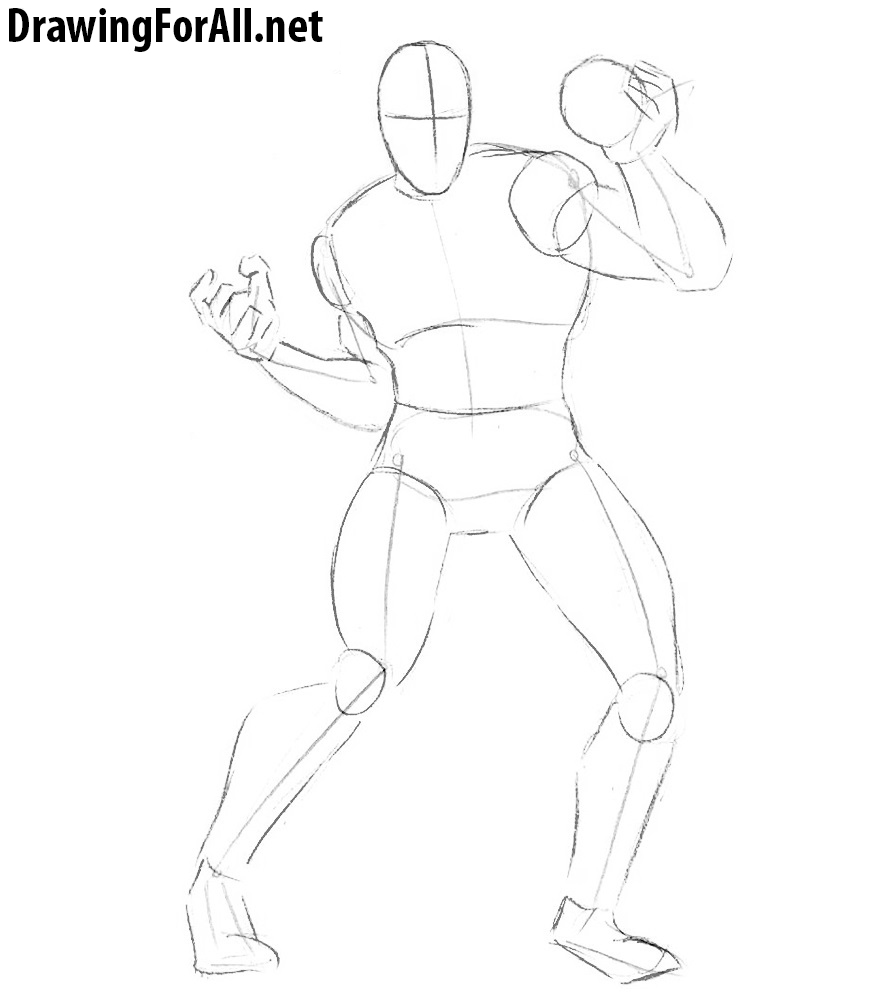 Let’s work with the face of the Green Goblin. First draw bing and demented eyes. They should look really scary and crazy. Then draw the hooked nose and big mouth with sharp teeth. Add some wrinkles to the face. By the way, the similar face and image in general you could see in our lesson on how to draw the Hobgoblin. 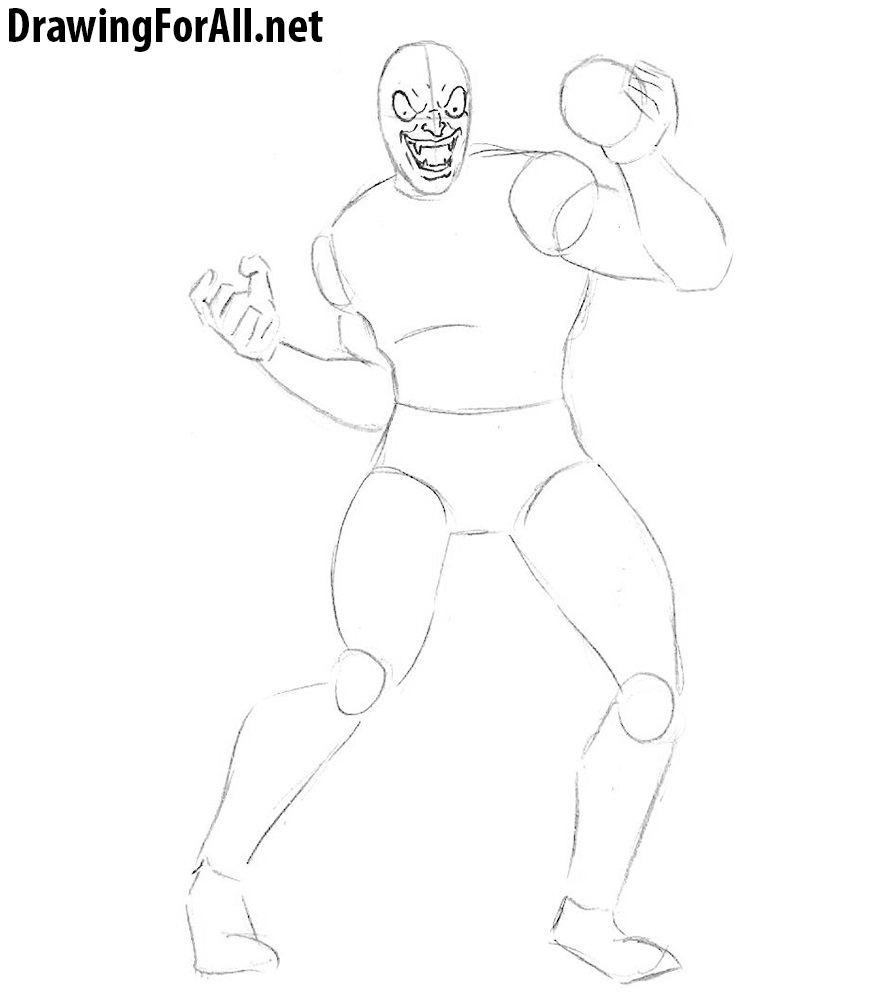 Here we are finishing to draw the head of the Green Goblin. Draw out the shapes of the face – draw the cheekbones and chin. Then draw the long and sharp ears. Once you drew the ears, draw the long headdress, which tapers to the tip. 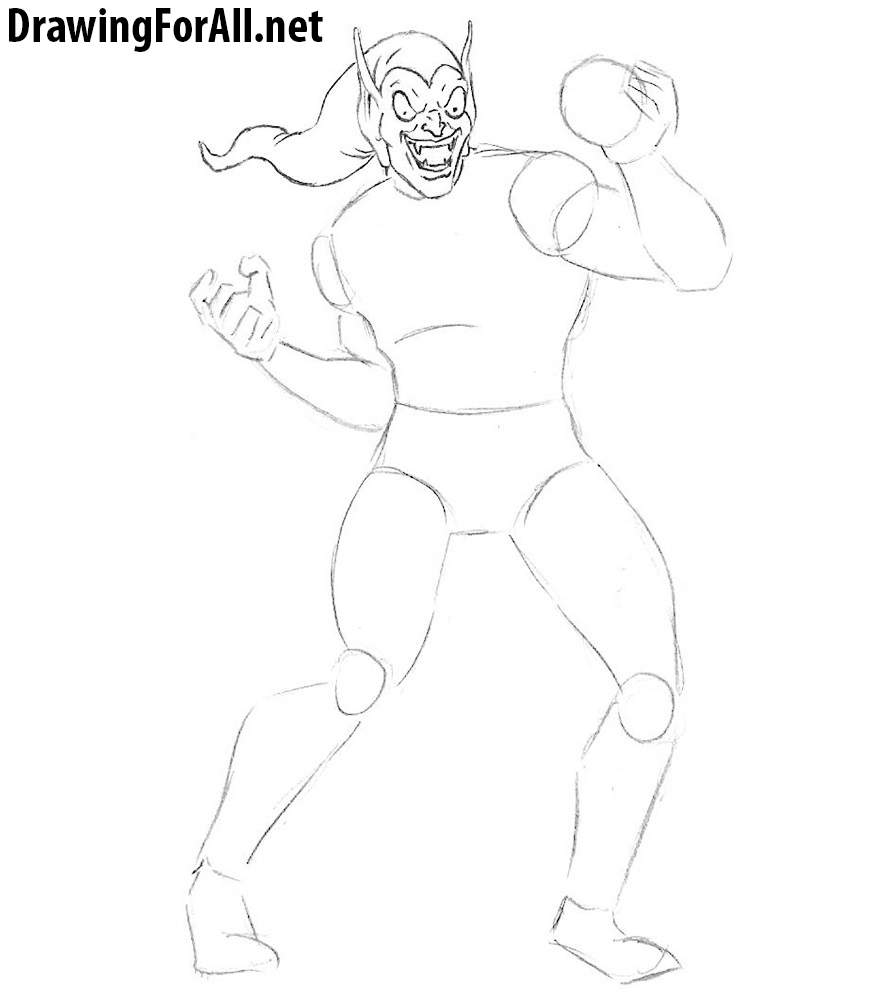 Draw out the torso of the Green Goblin. Add a lot of folds as in our example. Draw the bag, that hangs on the strap. Draw the thin belt and draw out the clothing on the pelvis. Add some folds as you did it with the torso. 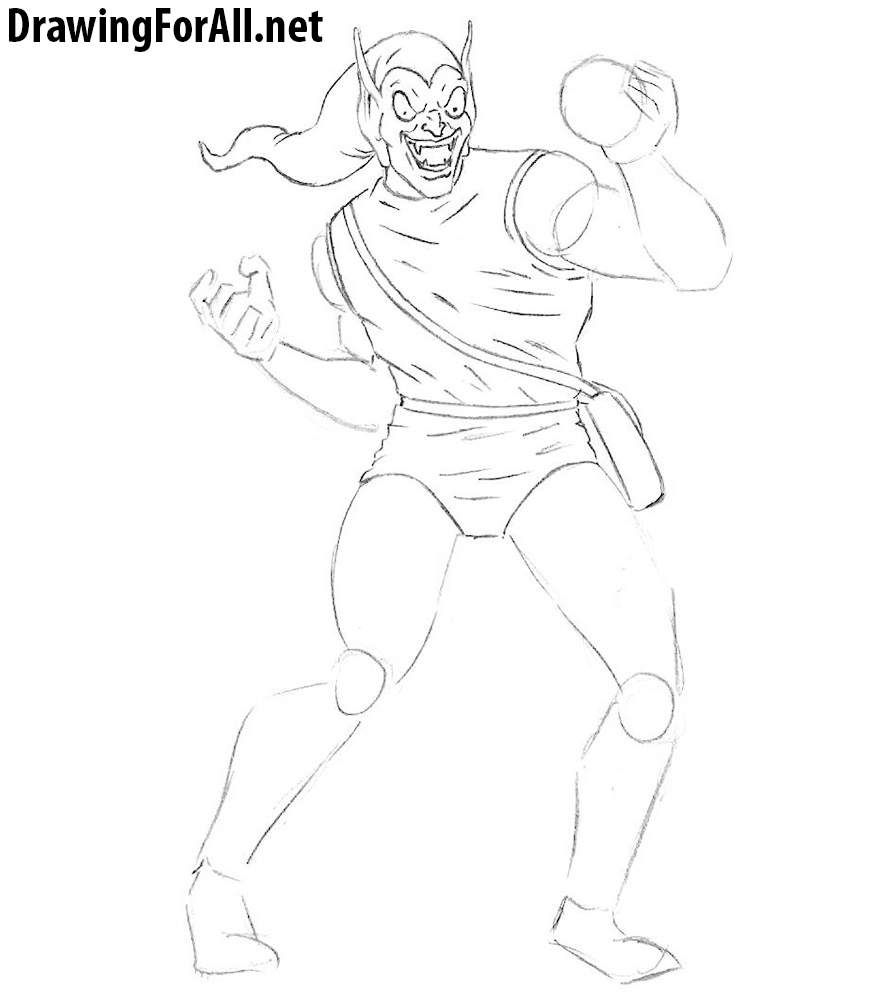 Draw out the arms. We can clearly see such parts of arms as deltoids, biceps and parts of triceps and muscles of forearms. Then draw out the long gloves, with a lot of folds. Accurately draw out the hands. At the end of the step draw the pumpkin bomb, that looks like a halloween pumpkin. 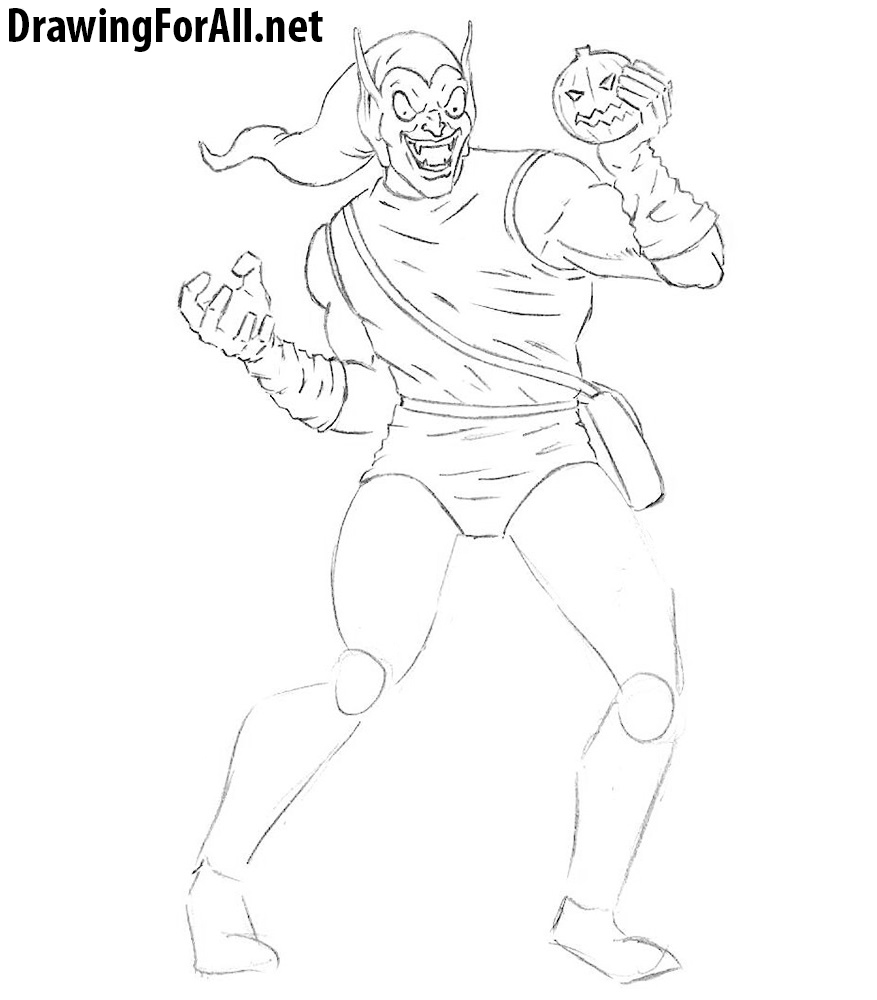 Draw the legs in the same way as you drew the arms of the Green Goblin. Accurately draw out the muscles of the legs. Draw the boots with sharp and raised up toe caps. Add some folds as on all other parts of clothing. 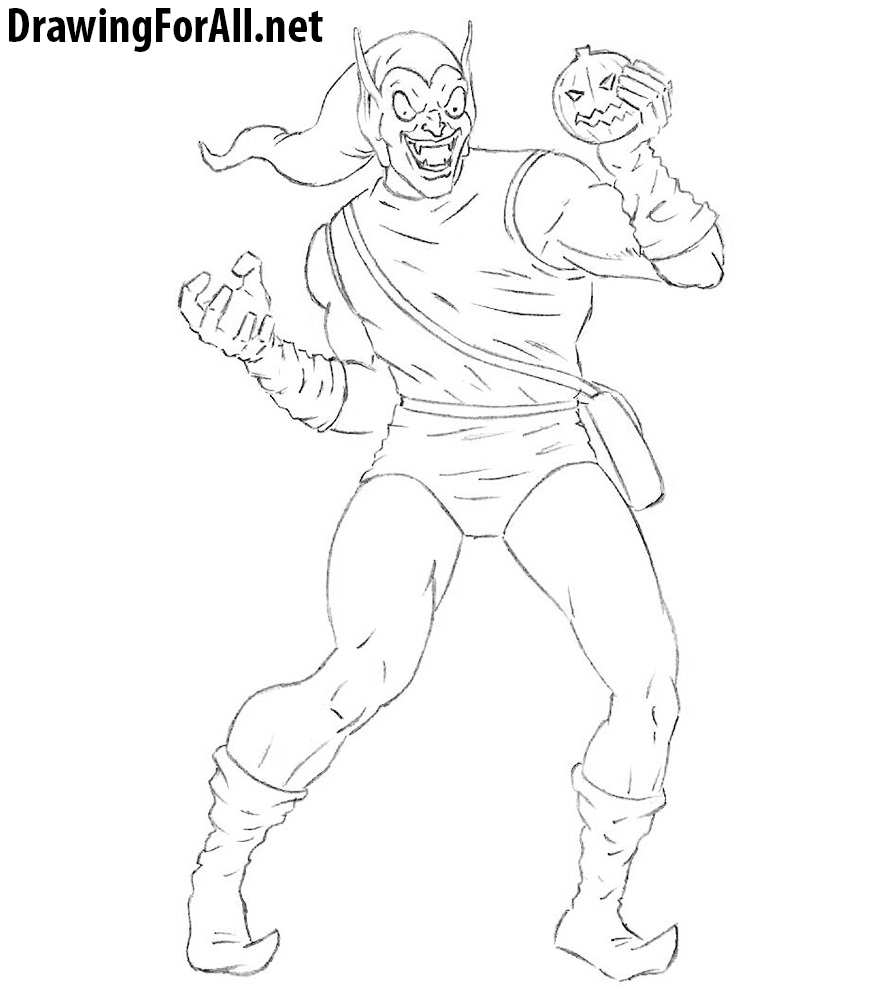 Remains only work with shadows. Here we see classic comics shadows. They are very dark and contrasting. To draw such shadows first draw the outlines of the shadows and then paint them out. And in the same step add texture of the skin (it is very similar to a fish scale) as in our example.

Drawing lesson on how to draw Green Goblin is over. Do not forget to subscribe to our social networks and share this drawing lesson, because only your support motivates us to work on new drawing lessons.