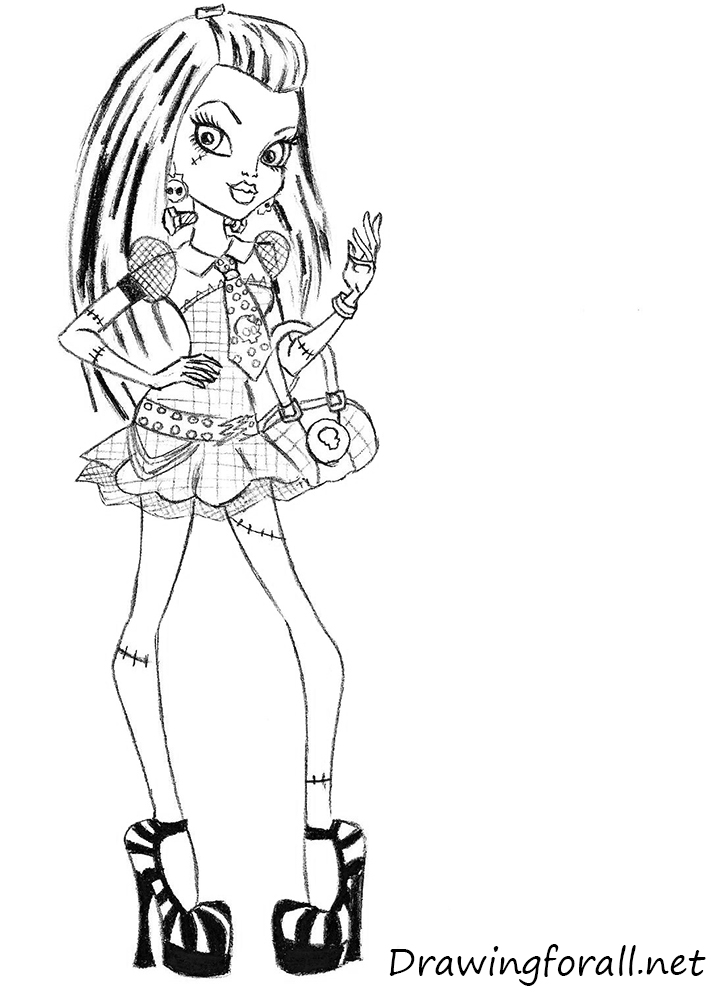 Hello, our artists finally got to the characters of the popular game Monster High universe, and today we present a new lesson drawing in stages devoted to one of the main students of the school monsters!

Let’s begin this lesson and learn how to draw Frankie Stein!

Draw stickman – the figure made of sticks and circles, which will help us to outline the main proportions and the position on the paper. Proportions of our today’s character a little unusual, very different from the proportions of an ordinary girl. First of all, it concerns the head – it is much bigger than the head of a real human. The proportions of the body are also different from real human – Frankie’s body length equal to the height of the head. And the legs are very long, as opposed to actual human proportions. So, draw the outlines of the head in the form of a circle, and the body using simple and very light lines. 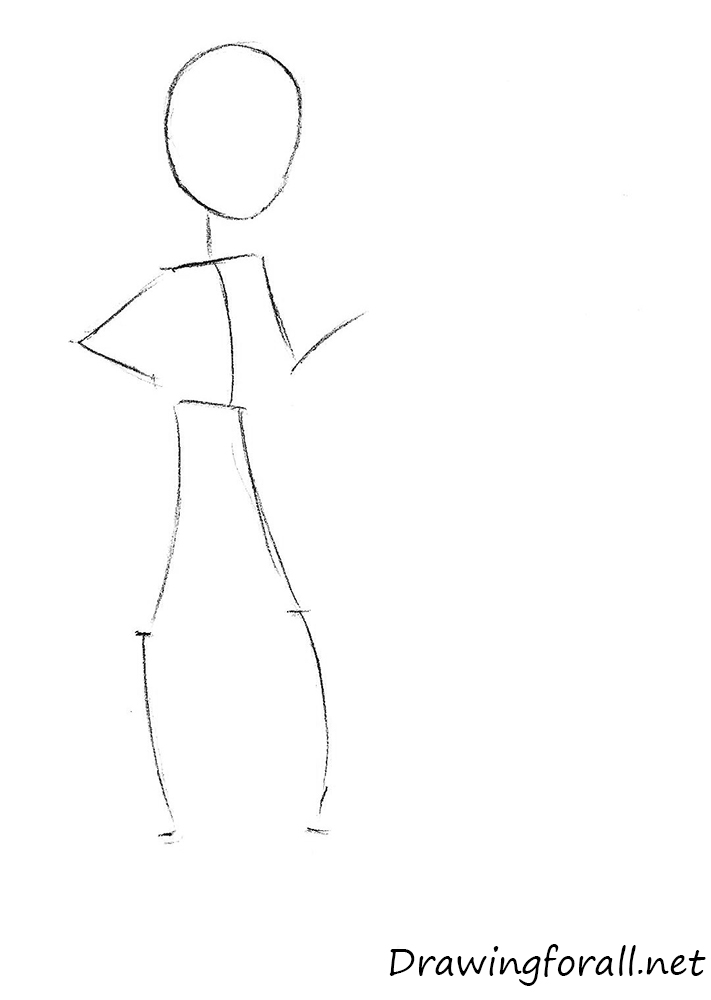 Mark the face. Draw a vertical line of facial symmetry. This line is crossed by several horizontal lines – the top and the long line is the line for the eyes. Below this line are lines for the nose and mouth. 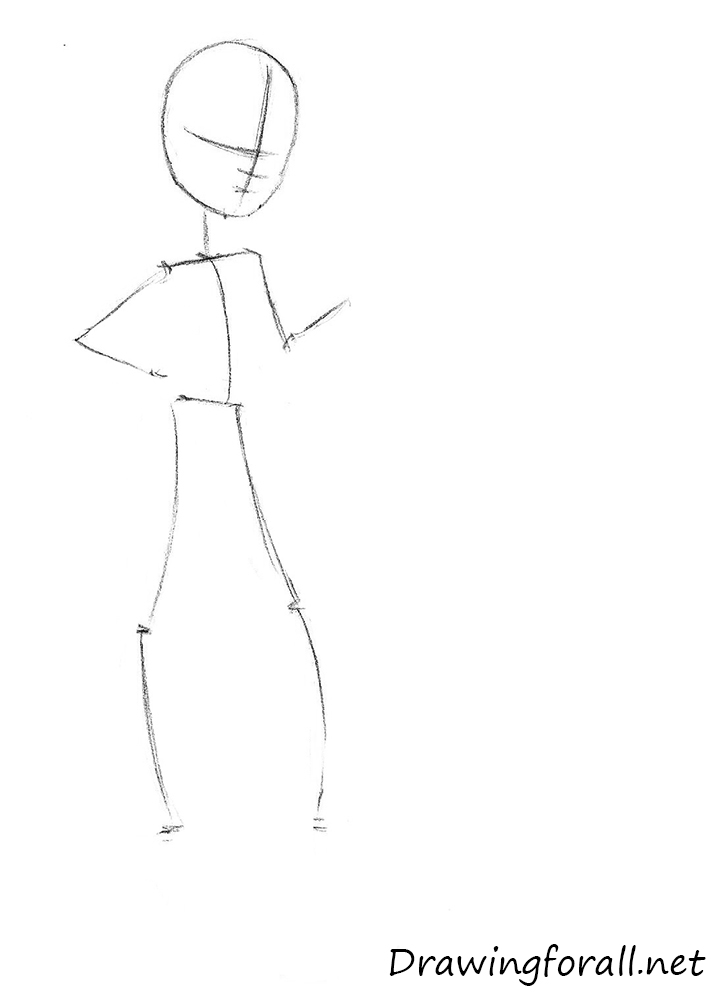 We attach a volume to the upper body of our charming monster. Draw the neck in the shape of the elongated oval. The body has an hourglass shape, the middle, the narrowest part of which is located in the area of the waist. The arms look like narrow, elongated cylinders. Sketch out the hands and move to the next step. 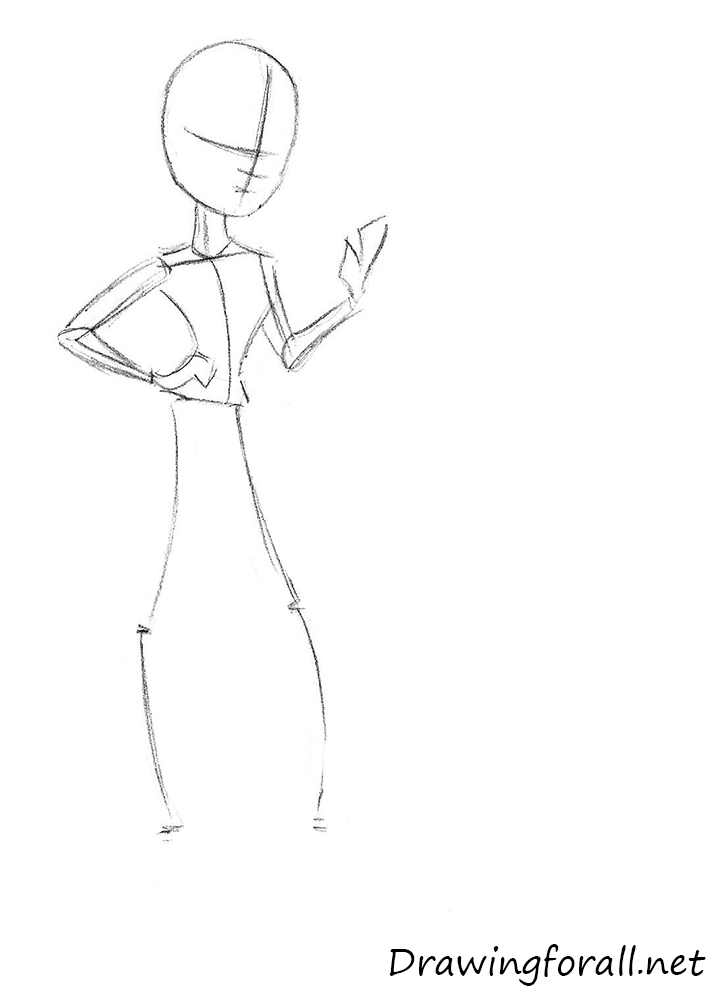 Repeat these actions with the lower part of the trunk and legs. Draw the legs in shapes of elongated and modified cylinders. Note, that legs taper in the areas of knees and ankles. Also, note, that the widest part of the legs is in the hips. Then go down and draw Frankie shoes. Again note on the proportions – these shoes are so high that practically coincide with the length of the shins. 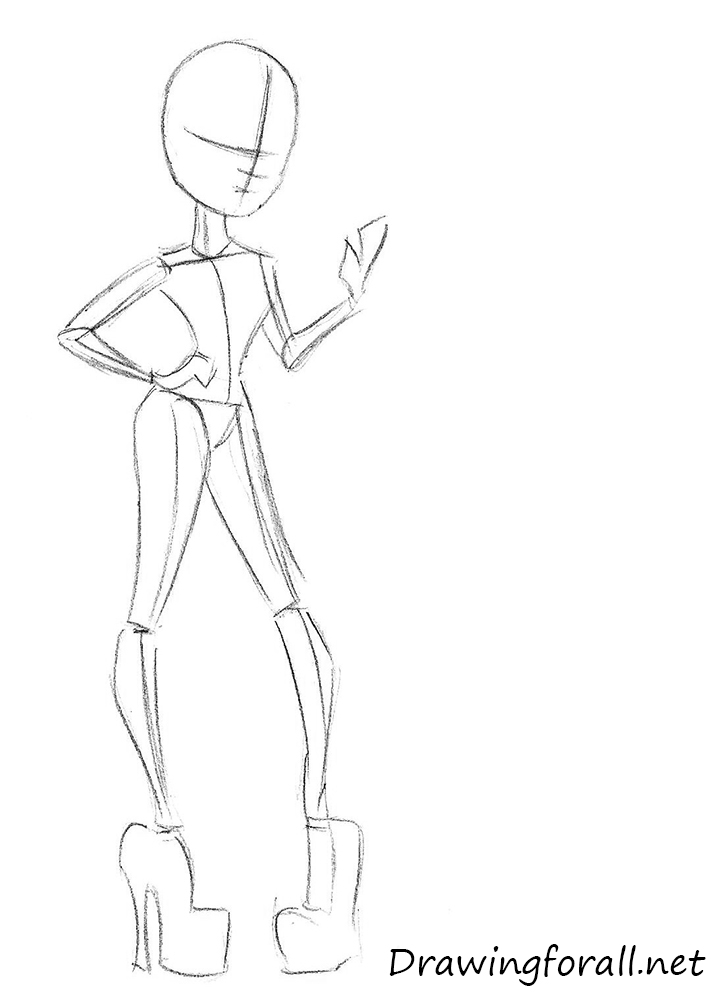 Using the markup from the previous steps, draw the large, almond-shaped eyes and full lips. Draw brows above the eyes, using lines in the forms of inverted check marks. 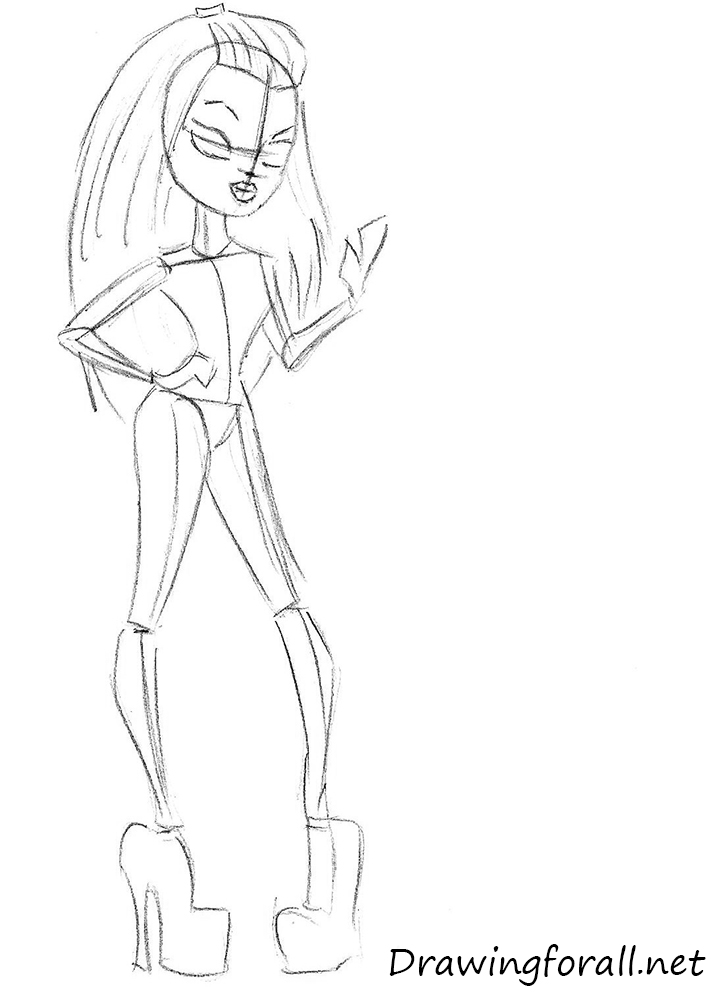 Erase from the face extra guidelines, and circle the lines of the face. Draw the pupils, leaving glares as in our example. Using short and curved lines draw the eyelashes. Draw the small nose and such details as earrings and screw on the neck. Circle the lines of the brows and lips. Complete this stage, drawing dark lines on the hair of Frankie. 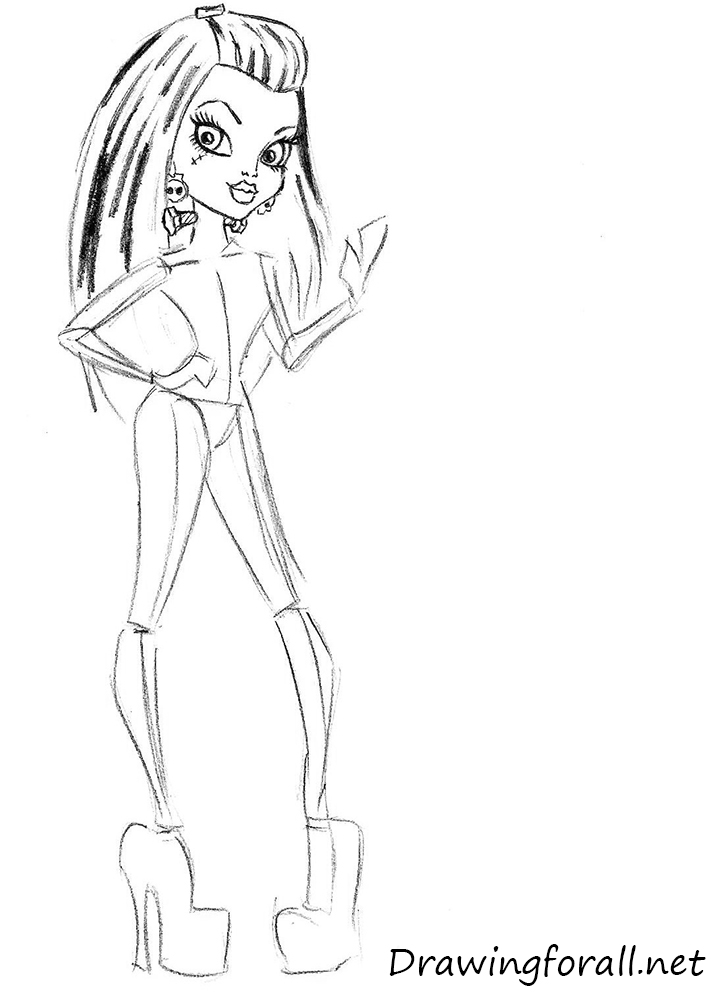 Now draw the torso. At the junction of the body and the neck draw collar and tie. Focusing on the shape of the torso, drawn in the previous steps, draw the dress. It should encircle the upper part of the hips and significantly expand downwards. 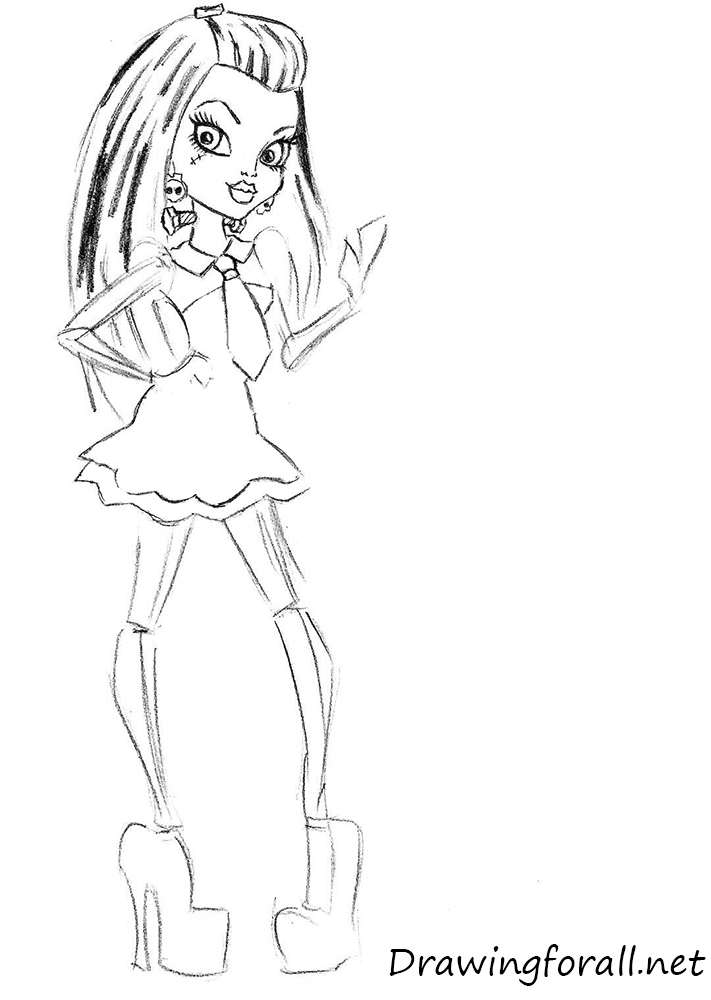 Add small details – draw a pattern on the dress of Frankie, as in our example. Draw a belt covered with small rivets in the form of beads. In place of the buckle of belt draw the shape of lightning, do not forget to draw hanging accessory in the form of a chain – it is located in the left part of the belt from us. Then draw patterns on the tie. 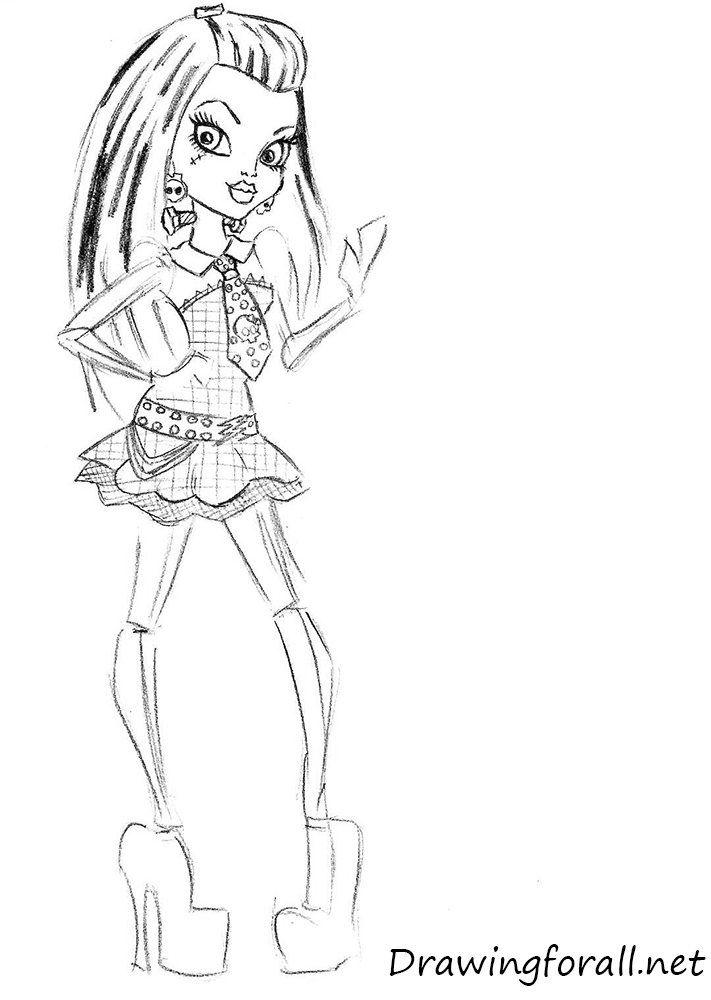 Erase extra guidelines from the hands and circle the lines. Draw circles in the areas of the shoulders. Draw seams and bracelet on the hands of Frankie. Draw the bag in the left hand add details to the bag. In the center of the bag draw round icon, similar in shape to the skull, and just below the handles denote square buckles. 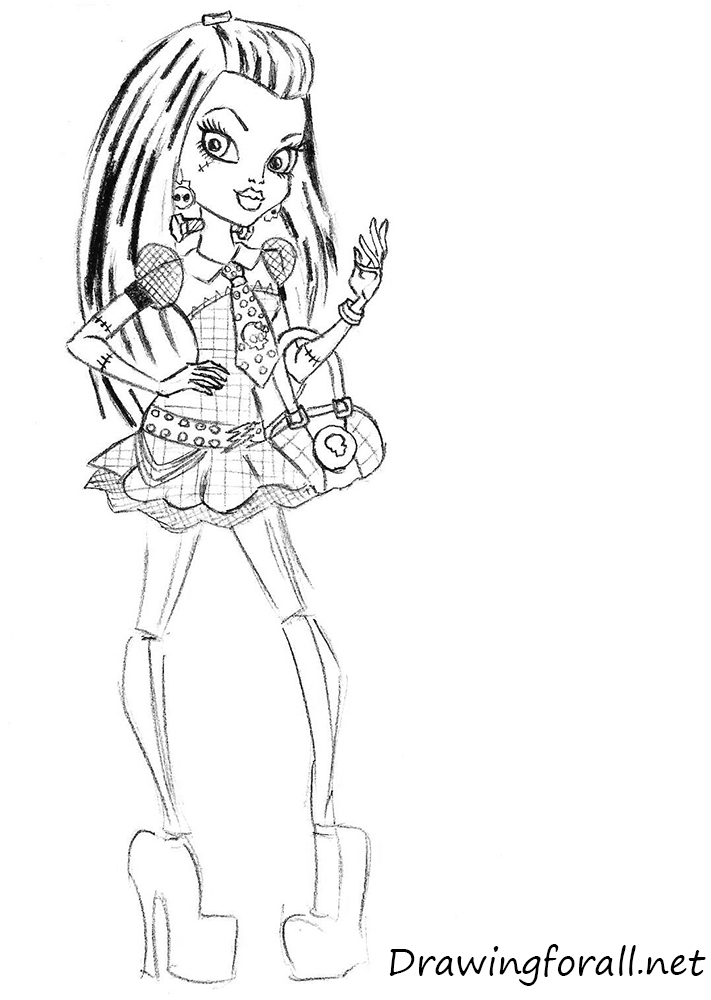 The upper part of Frankie Stein is ready, and we start adding details to the legs. Erase the guidelines and accurately circle the lines of the legs. Draw the seams on the legs. And complete the lesson on how to draw Frankie Stein, by drawing the dark stripes on the shoes.