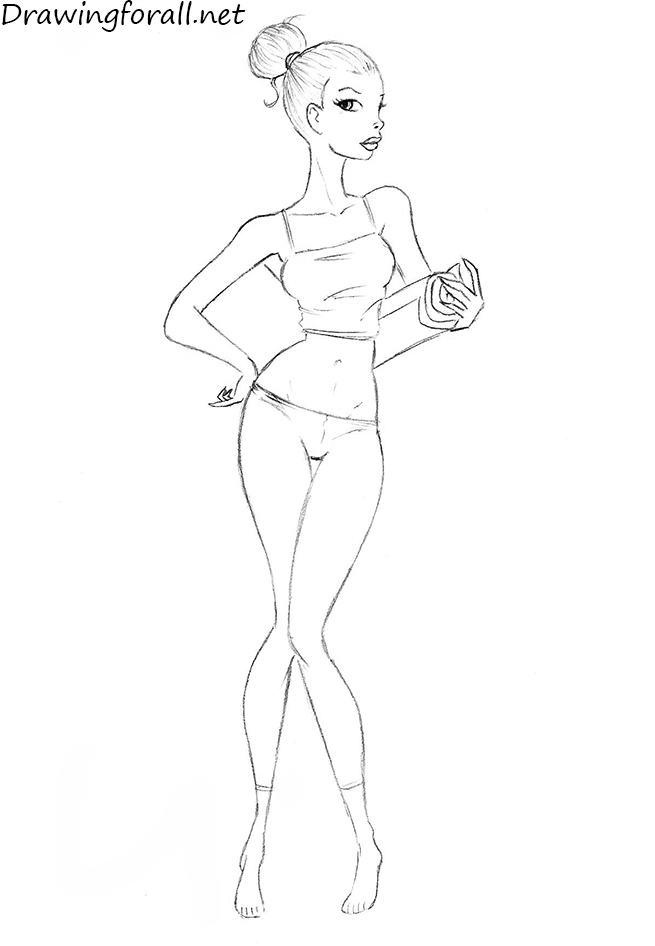 Hello! The theme of today’s article – how to draw a sporty girl with a pencil. Note that we are going to draw in a little-simplified style, even a cartoon style. On our site there is a significant gender bias in favor of men – indeed, we have a male doctor, a knight, an a samurai, and many others. But on our website is not so much girls. Let’s correct this situation, and learn how to draw a sporty girl!

Draw the stickman – a man made of sticks and circles, which we draw for the designation of main proportions of the character, posture and position on a paper. This is the first step, but it is important to consider the proportions of women, let’s try to remember them:

So, first draw the head in the shape of the egg. Below the head sketch out the neck, that goes in the spine. Using two equal lines draw the shoulders and pelvis. Sketch out the arms and legs. 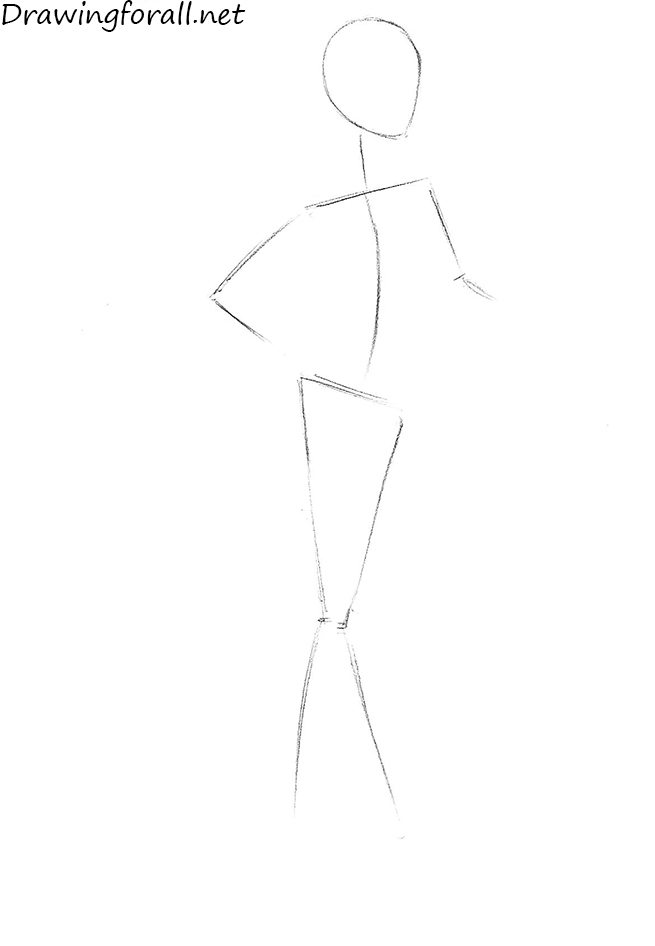 Add flesh to the stickman, but first mark up the girl’s head. Draw the vertical line, that shows us the center of the face. Then draw the horizontal lines of the eyes. Note that these lines should cross in the center of the face. Also, note that in our example the head is slightly turned to the right. Just above the nape, outline the ball, which would later become the topknot. Draw a thin, graceful neck and connect it with slender shoulders. Using long and thin cylinders draw the arms.

Using light and smooth lines sketch out the hands. Outline the body – it should take the form of an hourglass, tapered in the area of the waist. Using curved cylinders draw the legs, as in the picture below. Notice how the legs are narrowed in the areas of the knees and ankles. 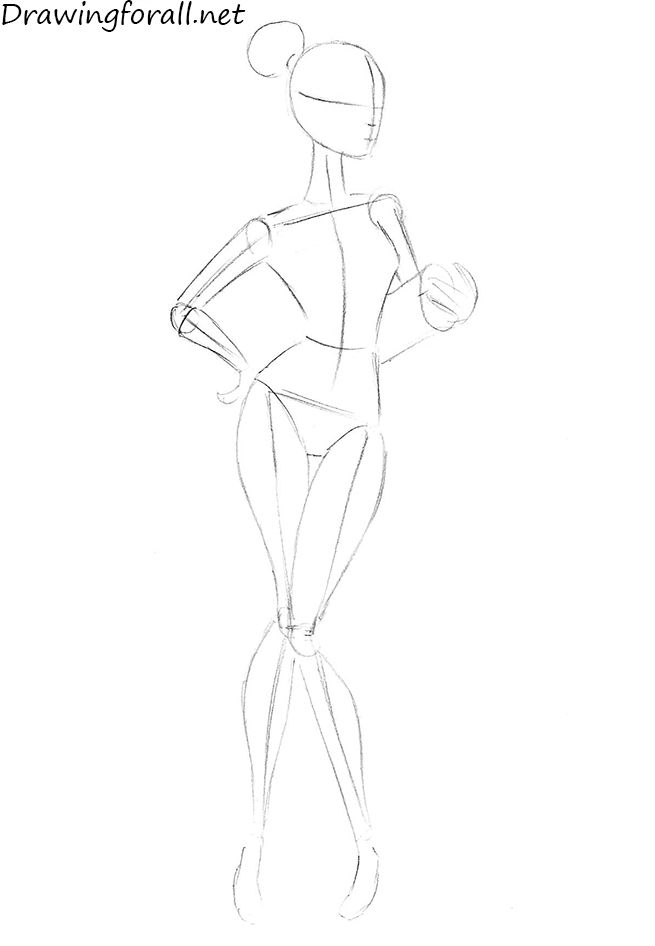 Using previously drawn facial markings, outline the eyebrows, the upper contour of the eyes, upturned nose, ears and mouth. At this stage, all denoted by simple strokes, which we will detail in the next stages. Draw the line of the hair and the scrunchy. Also, don’t forget to erase the guidelines from the face. 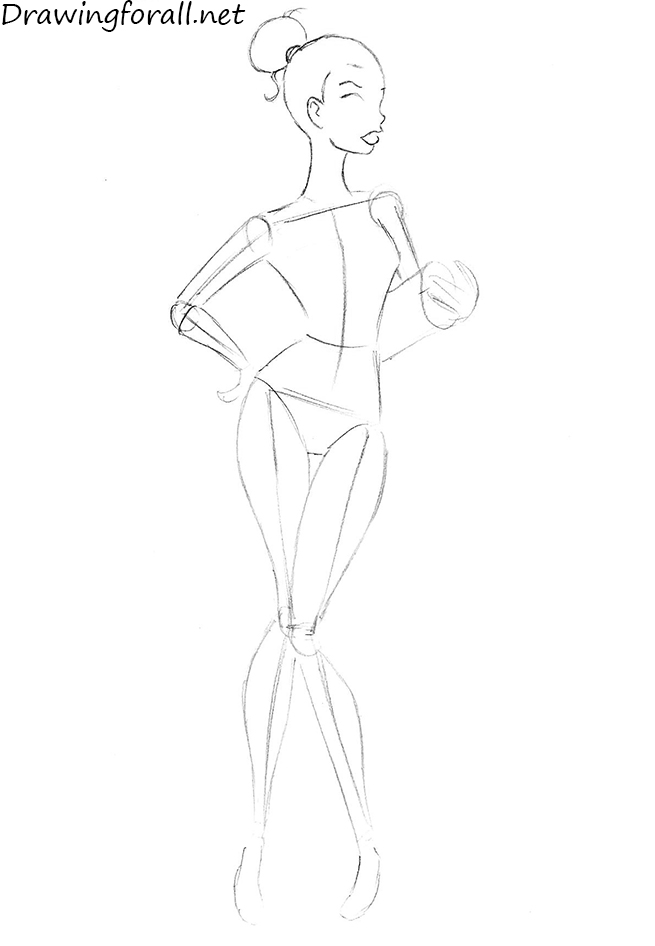 We continue to detail the face. Draw hair in the direction from the roots to the tips. Complete the eye contour, draw the curving up eyelashes. Here we divide the mouth for a couple of plump lips. Outline and contour of the nose and nostrils. 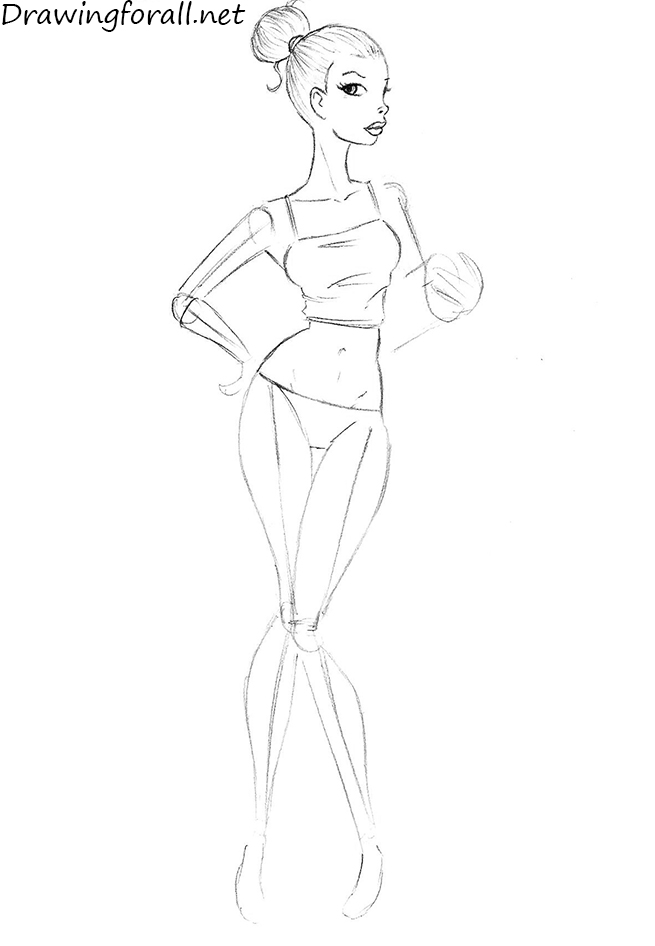 Now erase extra touches from the arms and circle their contours. Draw the hands and thin fingers. In the same step we circle the contour the roll of the mat for fitness. 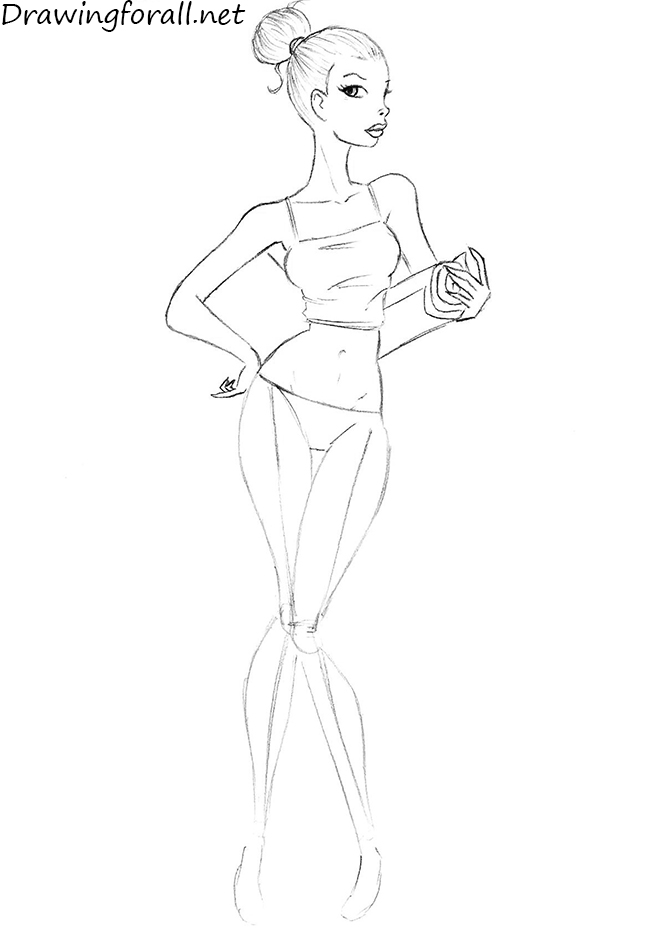 And in the final step of the drawing lesson on how to draw a sporty girl we draw the legs. It is simple – circle the contours of the legs using clear, visible lines and erase guidelines and extra touches from the previous stages.

It was a lesson in which we told you about how to draw a girl with a pencil step by step. If you want to get acquainted with such a sweet girl, try to surprise her, drawing a rose for her. Visit Drawingforall.net, to learn more about drawing and find a lot of interesting about art. Do not forget to follow us in social networks (Facebook, Instagram, Google+, Twitter and etc.), and goodbye!