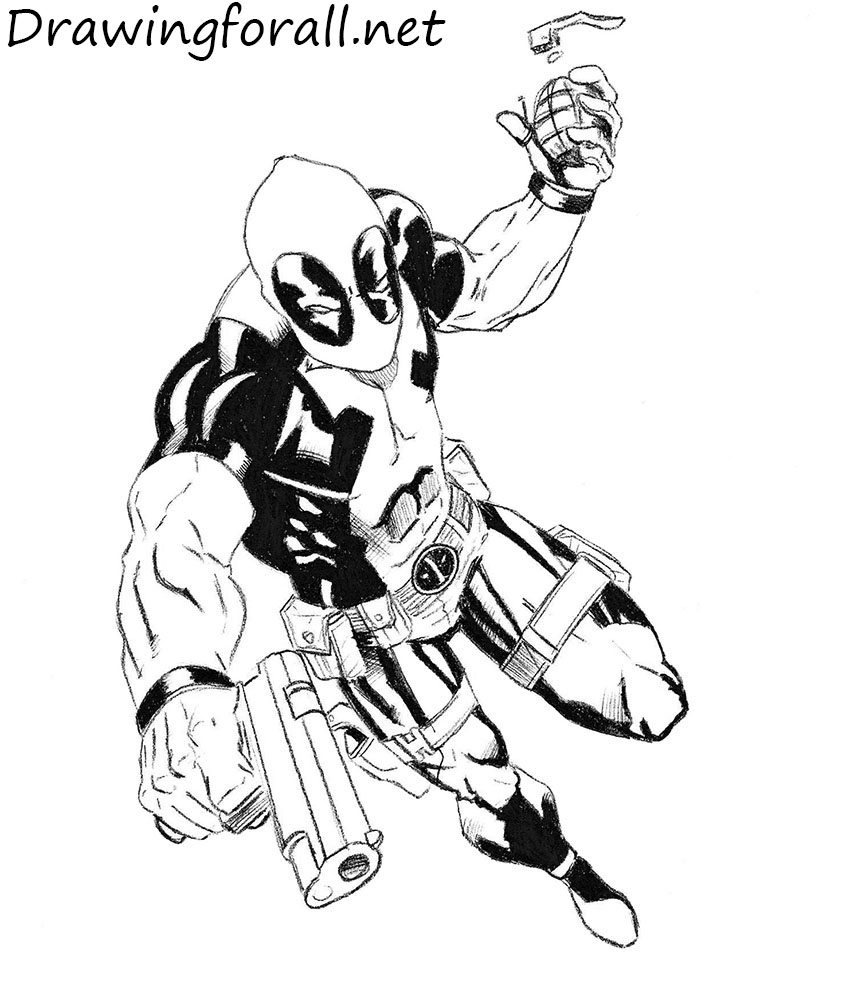 Hello everyone, today’s lesson is made at the request of our readers who are not indifferent to the Marvel universe, and today we will draw the mysterious Deadpool!

We begin, as always, with stickman – man made of sticks and circles, which we draw to designate the posture of the character, the proportions of the body and the position on the paper. Speaking of proportions – because of the unusual perspective, drawing (we look at Deadpool from the top down), the proportions will appear very distorted, particularly during the first step.

First of all, draw a head in the shape of an oval. Draw the line of the back and shoulders, using simple lines. Then with simple lines mark the hands and feet. Just do not forget that in the initial stages you should draw using clear, but very light touches. 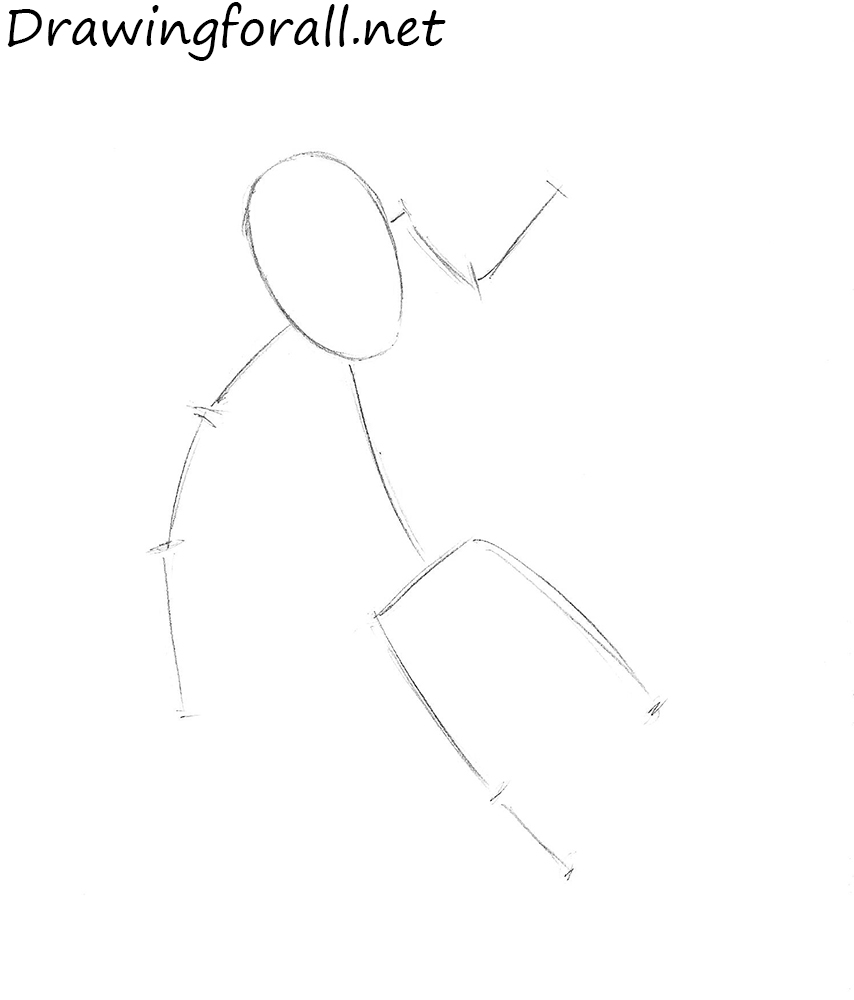 The stickman is ready. From this step we start adding volume, and in this step we will draw the lines of the facial symmetry. Draw the vertical line of symmetry of the face and the horizontal line of the eyes. Note, that these lines crossed in the center of the face. And these lines shows us the direction of view.

Because of the angle of view and posture of Deadpool we can not see his neck, so sketch out deltoids, using circles. And then draw the arms, which at this stage can be divided into three parts:

Conditional fourth part is the hands. Sketch out the contours of the torso, that tapers to the waist. Draw the gun in the right hand and grenade on the left hand. 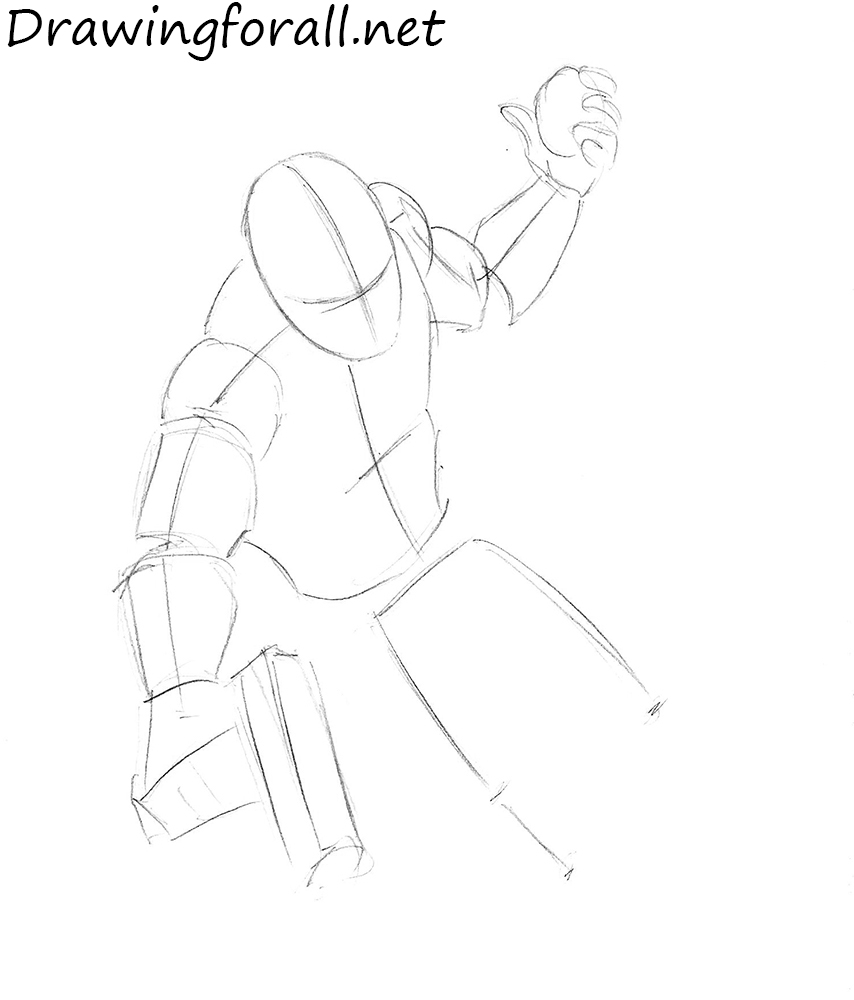 The upper part is ready. In this step we will start adding volume to the lower part of the Deadpool. Draw the pelvis area using the figure similar to the triangle. Draw the legs in the shapes of cylinders. About legs there is an interesting point in this lesson – the right of us is closer to us, so it looks bigger visually in spite of the fact that she strongly bent, and we can only see the hip. 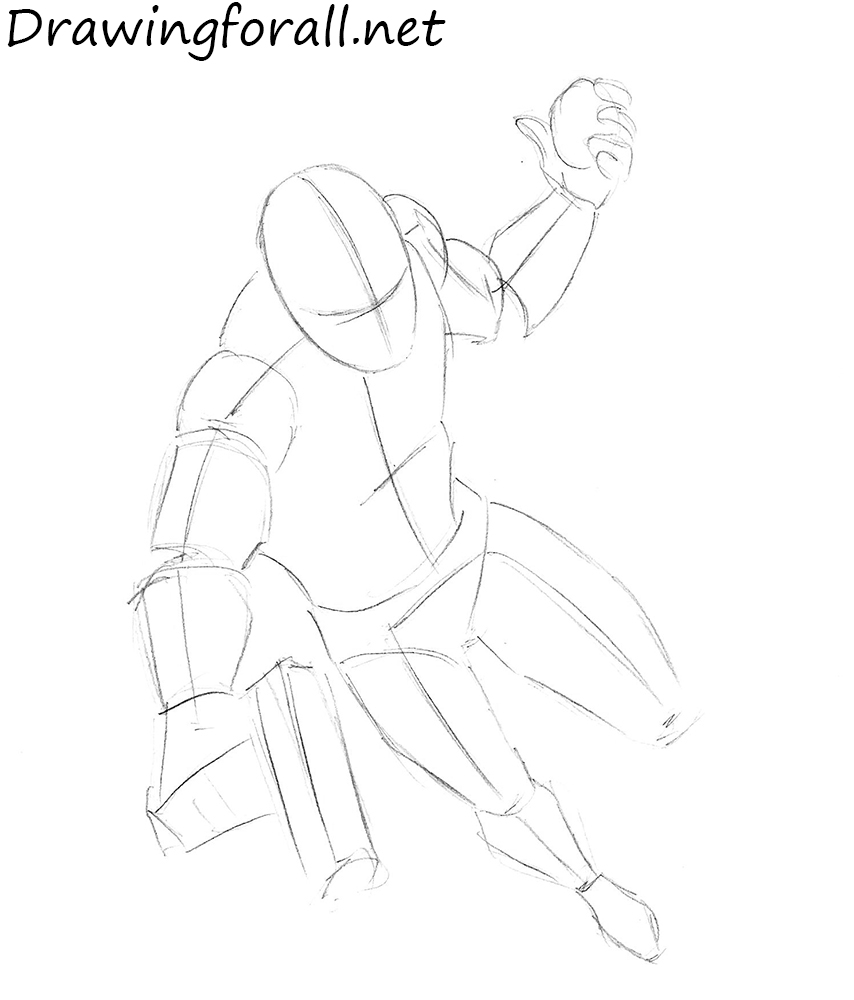 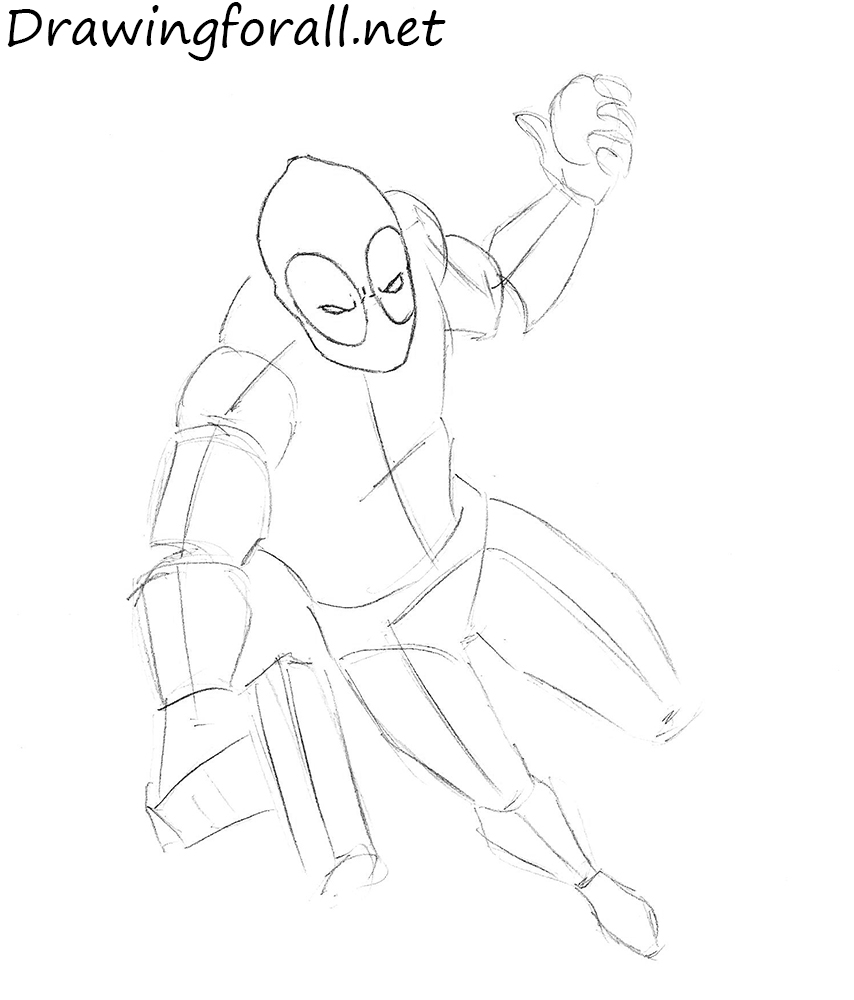 As we have said, Deadpool – an exotic and very interesting character. One of the interesting facts is that Deadpool is almost the only Marvel character, that realize that He – is the character of comics. So, continue drawing lesson, about how to draw Deadpool. Now draw the torso of Deadpool. First, draw the muscles, and then – patterns on the costume. The main muscles that are visible at this stage – is outlines of the pecs and abs. 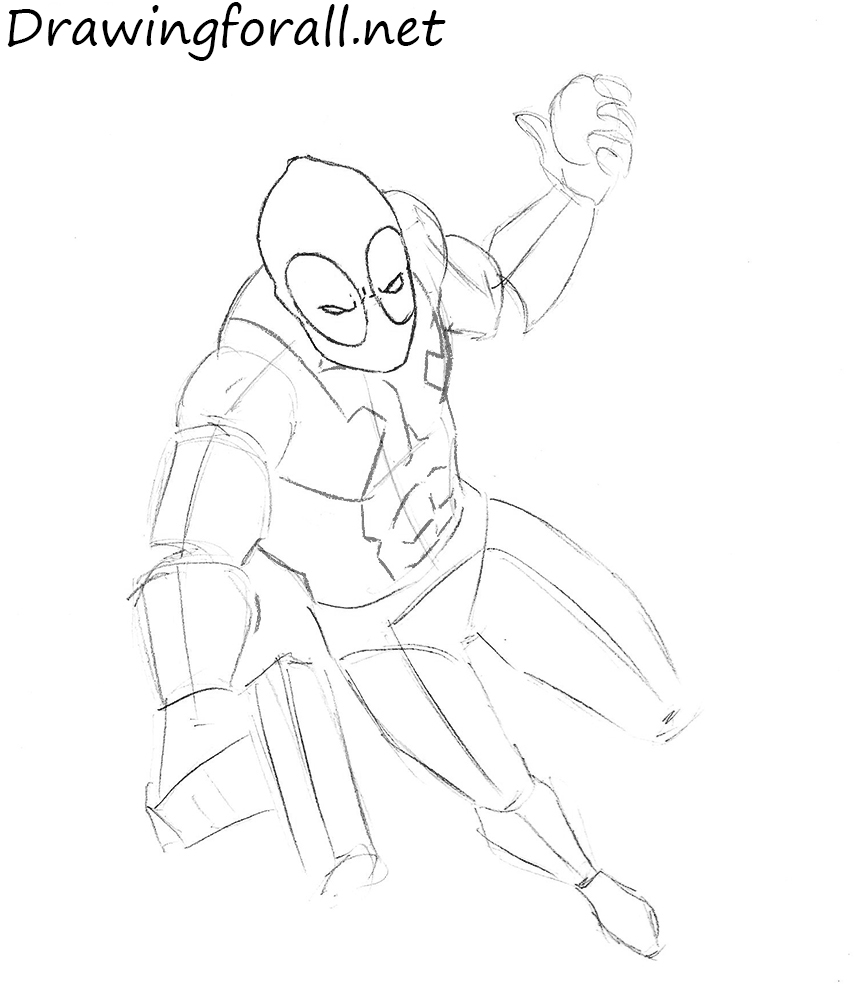 In this step of the tutorial about how to draw Deadpool we draw the hands. Our hero is clothed in a suit from head to toe, but this suit is very fitting, therefore need to draw the muscles in great detail. Mark undulating mounds of muscles, passing through the whole arm – from the delta to the forearm. Using straight lines draw the gun in the right hand. And in the left hand draw the grenade. Don’t forget to draw the lines of the costume and bracers. 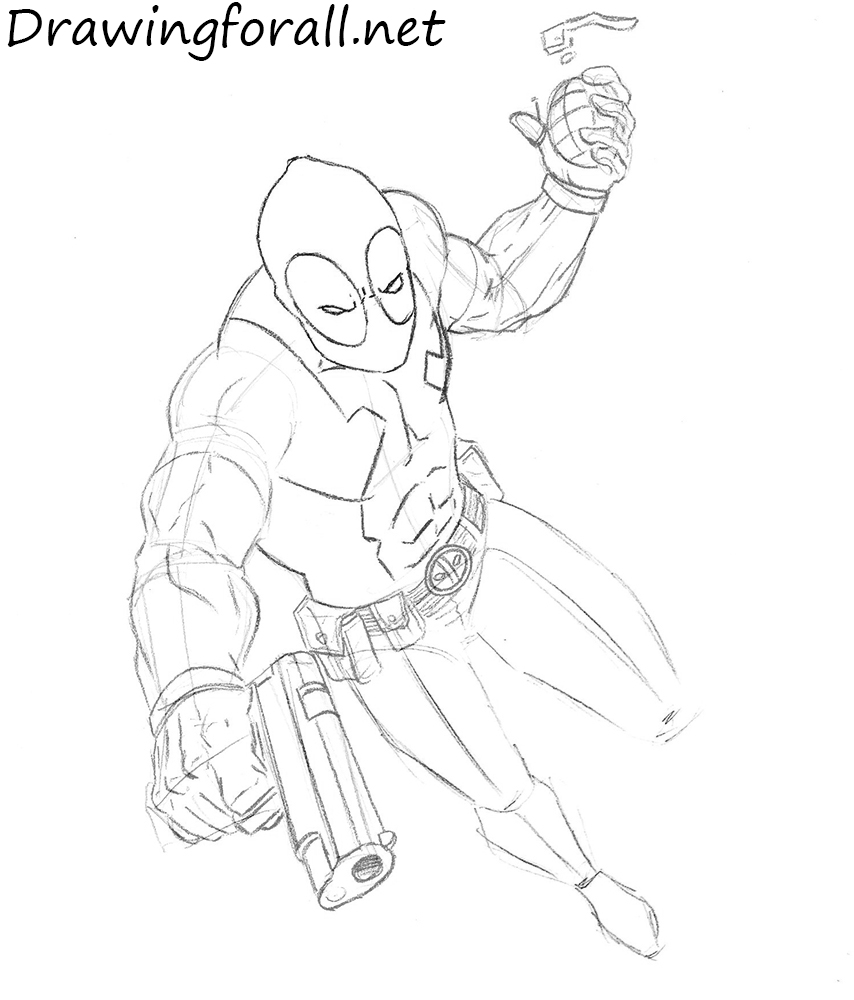 In this step we finish the upper part of Deadpool. Erase the guidelines and all unnecessary guidelines, as we did in the example below. Circle the lines of the torso and hands (to learn more visit our drawing lesson about how to draw hands), using clean and sharp lines.  Draw the belt, with a lot of pockets. Draw the logo of Deadpool on the center of the belt. 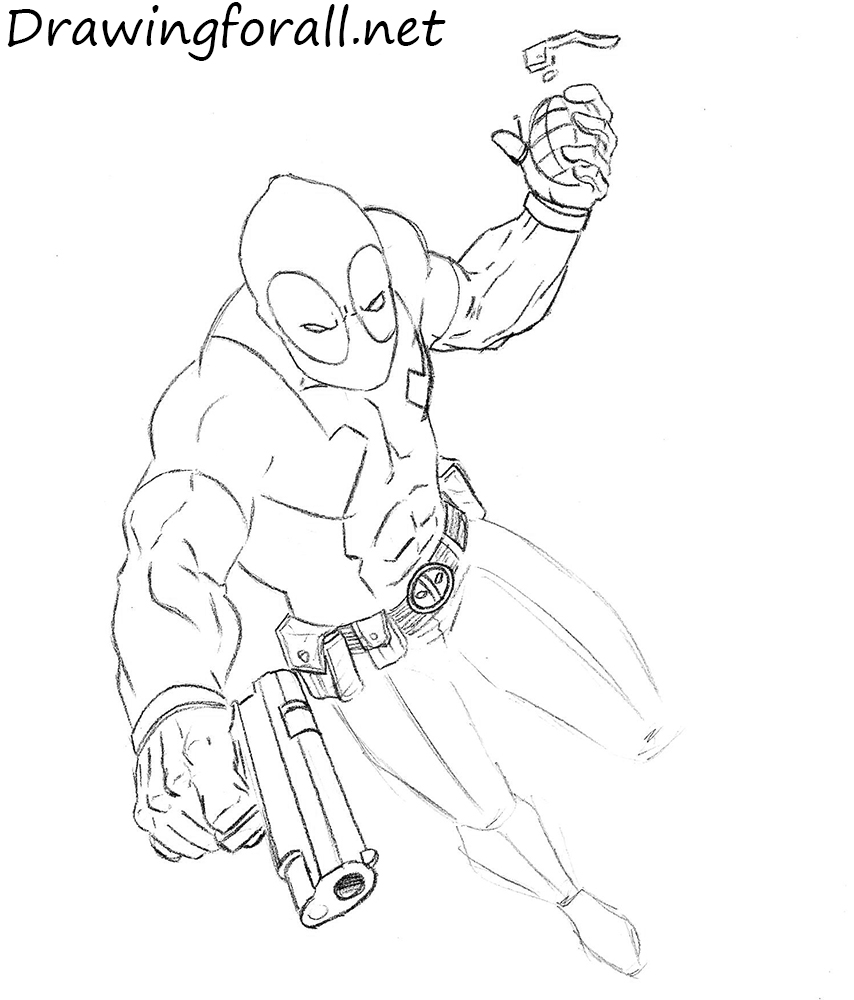 Note, that in this picture Deadpool appears to us without his most important attribute – the samurai sword.

So, continue to draw Marvel superhero. In this step we draw the legs of Deadpool. Erase the unnecessary lines of the previous steps and draw the vertical lines indicating the hilly and powerful thigh muscles. Actually, these lines are not so many, and they are all drawn from the waist to the knees. Draw the lines of the knees and sketch out the strap on the leg. 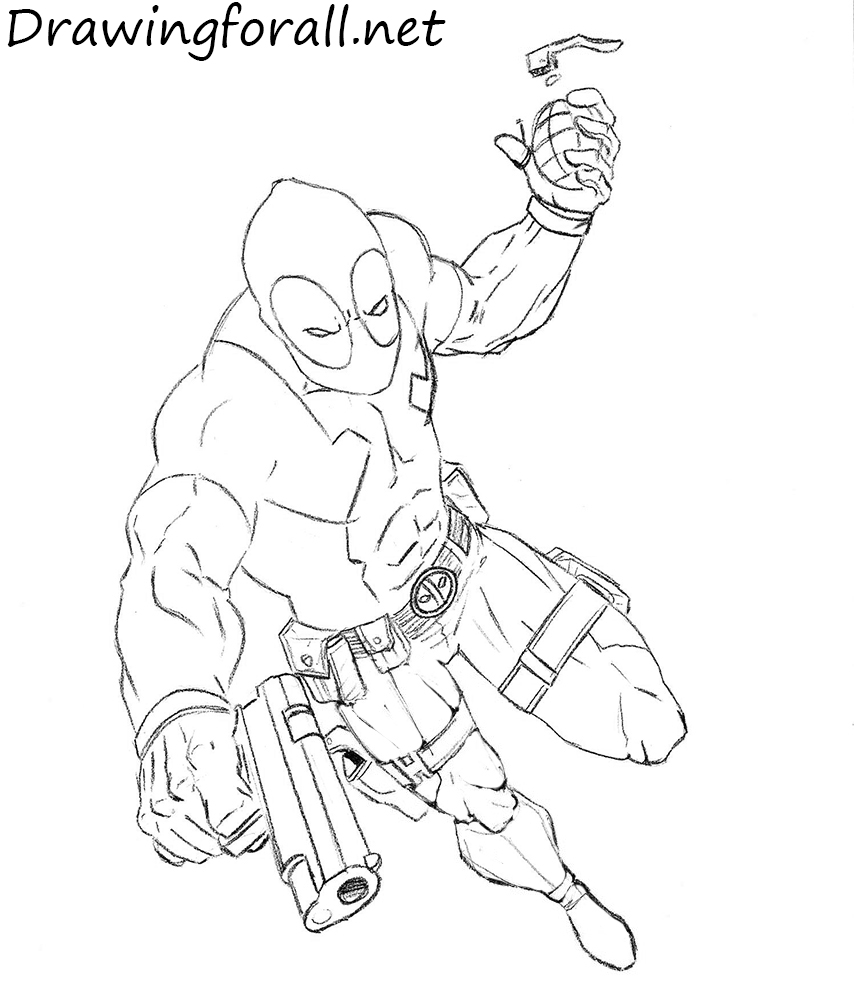 Here, our artists have used comics style of shadowing, which involves dark, contrasting shadows located on the large areas and consist of the usual thick hatching. In order to get such shadows, first draw the contours of the shadows, and then paint the areas of the shadows. To get halftones use thick hatching.

It was a lesson in which we told you about how to draw Deadpool. If you have comments about new lessons – feel free to write them in the comments, we will try to implement them. Good luck and see you at Drawingforall.net!