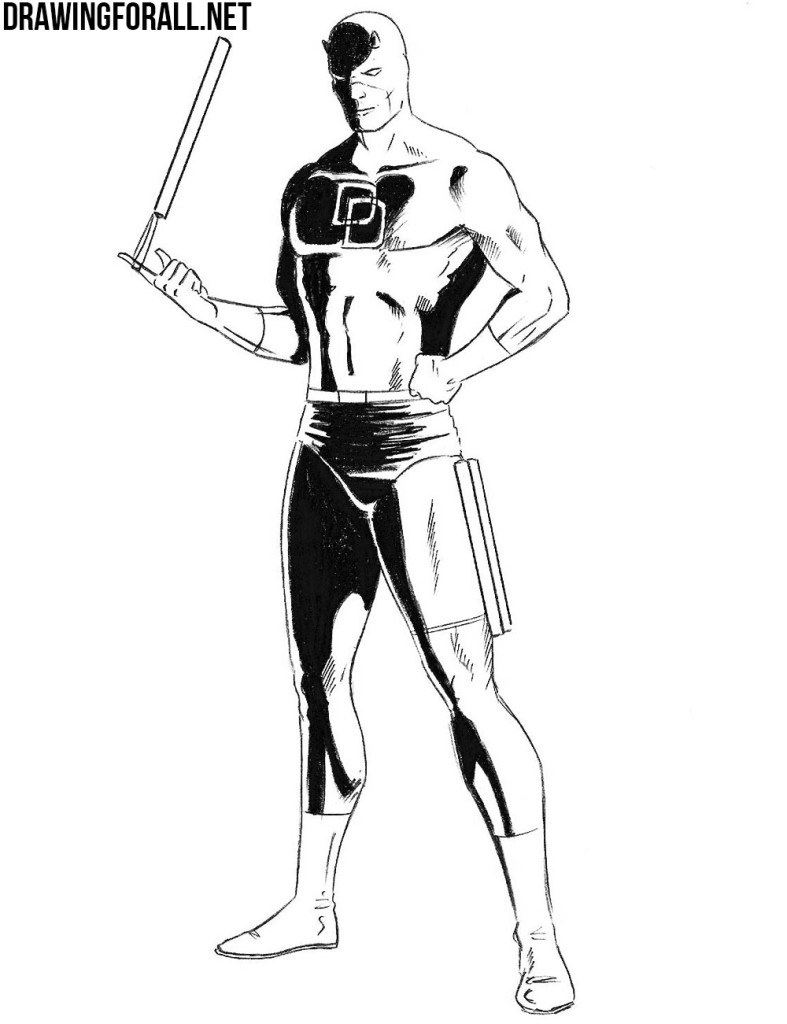 Kind time of the day, dear artists and comic book fans. In today’s drawing lesson we’ll show you how to draw Daredevil from the Marvel Comics. The character was created by screenwriter-editor Stan Lee and artist Bill Everett  and first appeared in the comic book Daredevil # 1, published April 10, 1964. The canonical Daredevil is Matt Murdoch.

First of all we need to draw the skeleton of our Daredevil. Take a pencil and with the help of light and translucent lines draw the head of our superhero with the help of an oval. Next, outline the neck which goes into the spine. Then sketch out the chest and pelvis. At the end of this step draw the arms and legs and move on to the next step. 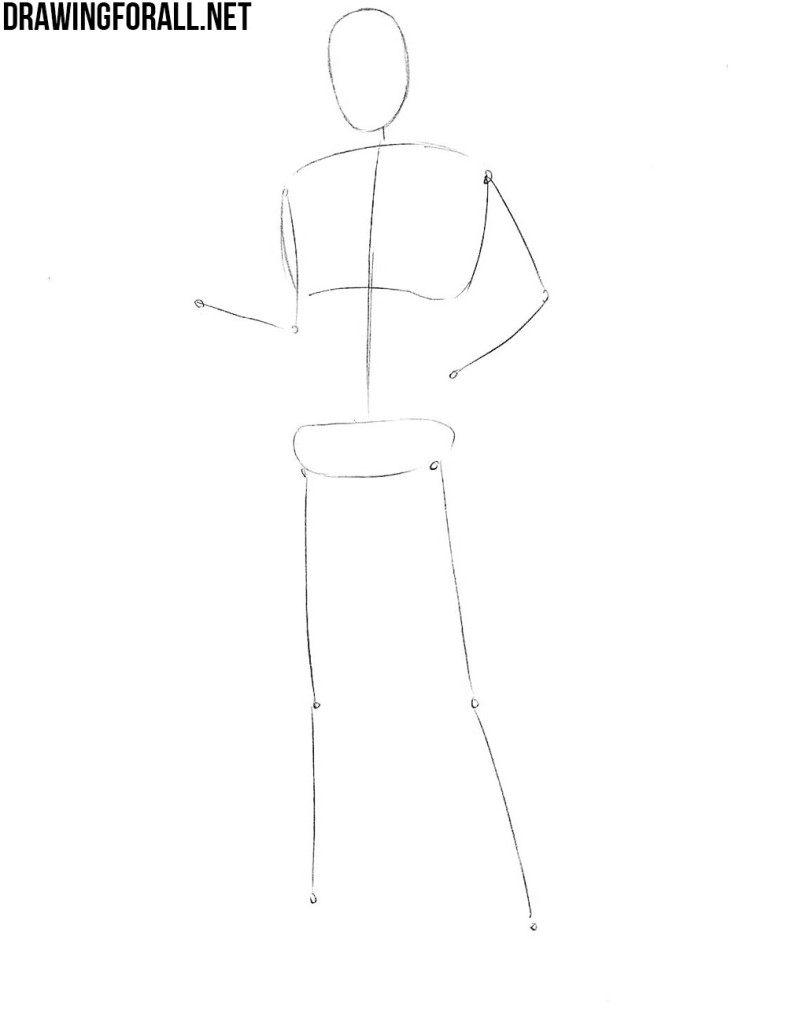 Outline two intersecting lines on the head, with which we will draw facial features. Next draw the neck in the form of a cylinder. After that, sketch out a torso that narrows in the waist area. Sketch out the shoulders in the shape of circles and arms using shapes of cylinders. In the same way we draw the legs and move to the next step. 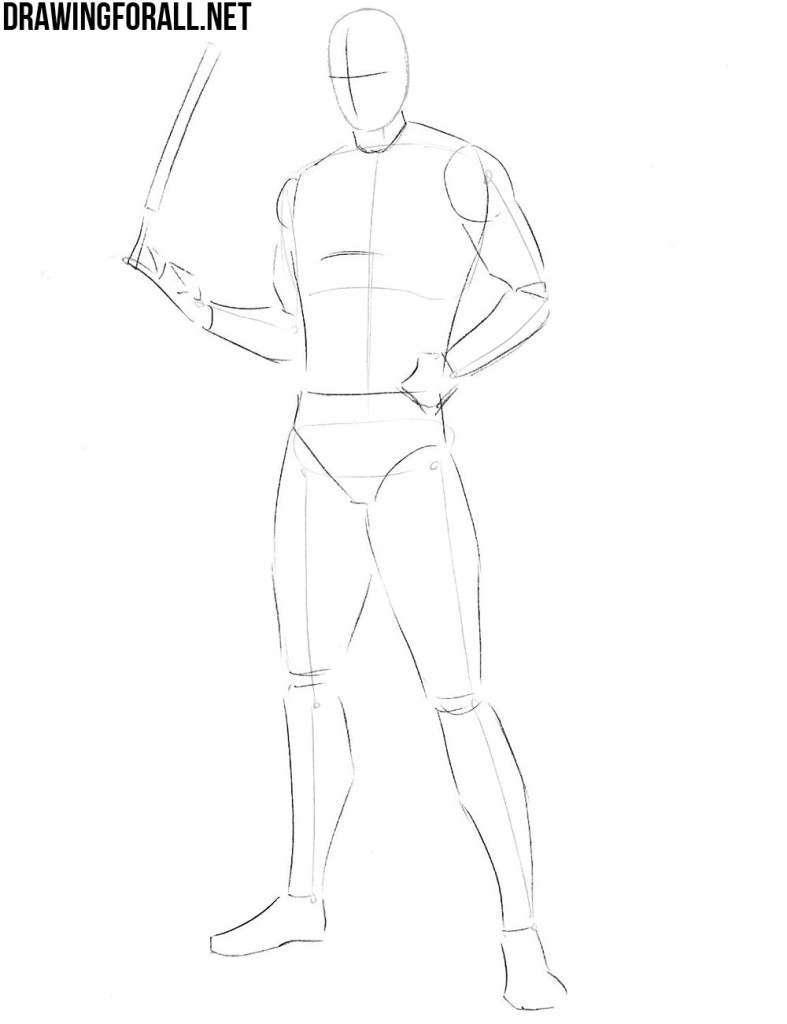 Now let’s move to the facial features of our Daredevil. Draw frowning eyes on the horizontal line from the previous step. Under the eyes draw a nose and mouth. 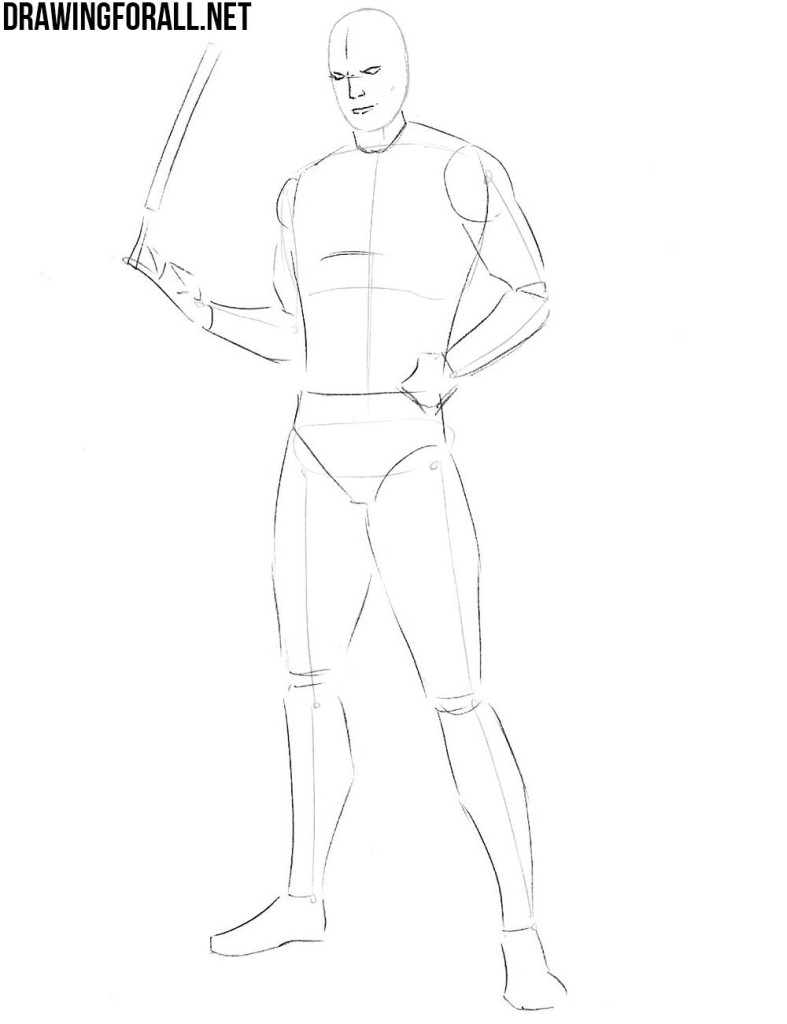 Continue the drawing lesson about how to draw Daredevil. Now we need to draw out the outline of the head with horns and a opening for the mouth. 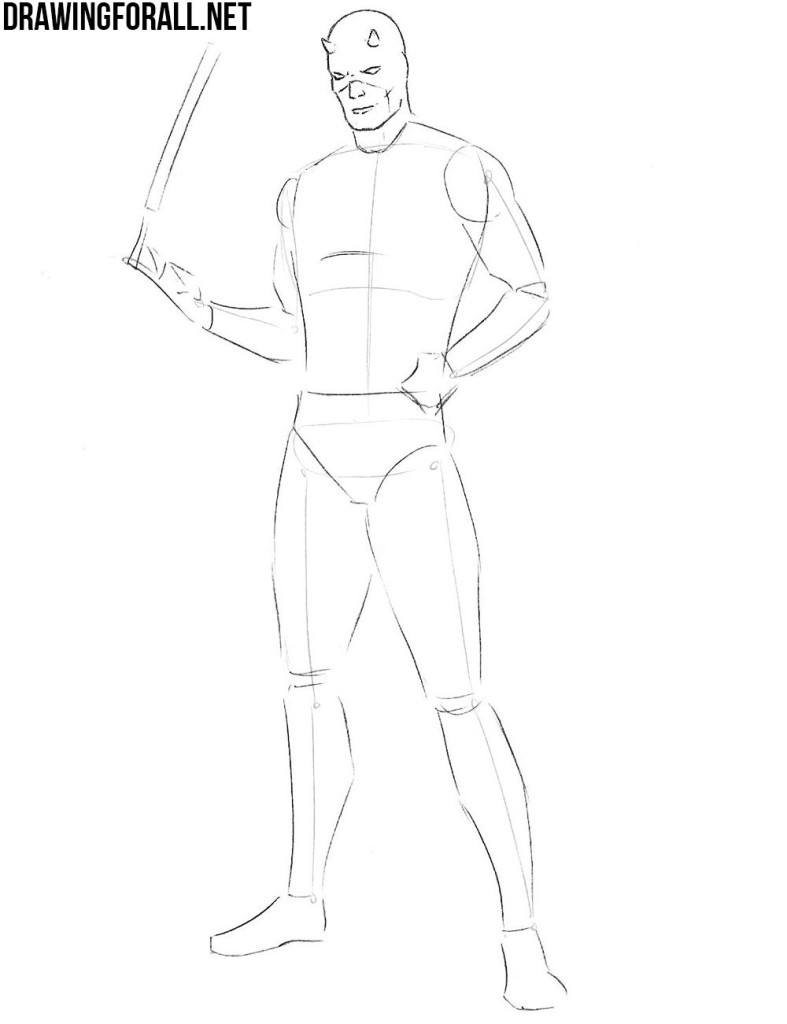 Draw the lines of trapezius muscles, pectorals, abdominals and the muscles of the back. Erase all guidelines from the torso of our superhero and draw the logo of Daredevil. 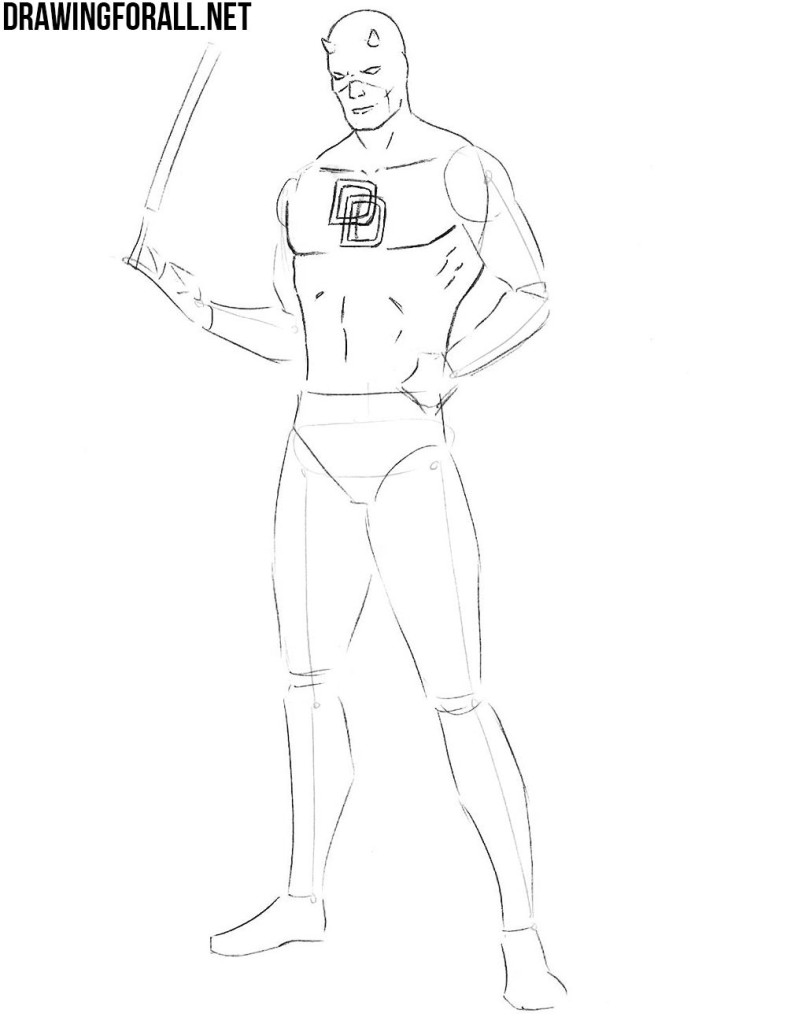 Draw the rounded muscles of the shoulders. Then draw the biceps, triceps and forearms. Add the outline of gloves and draw the stick in Daredevil’s hand. 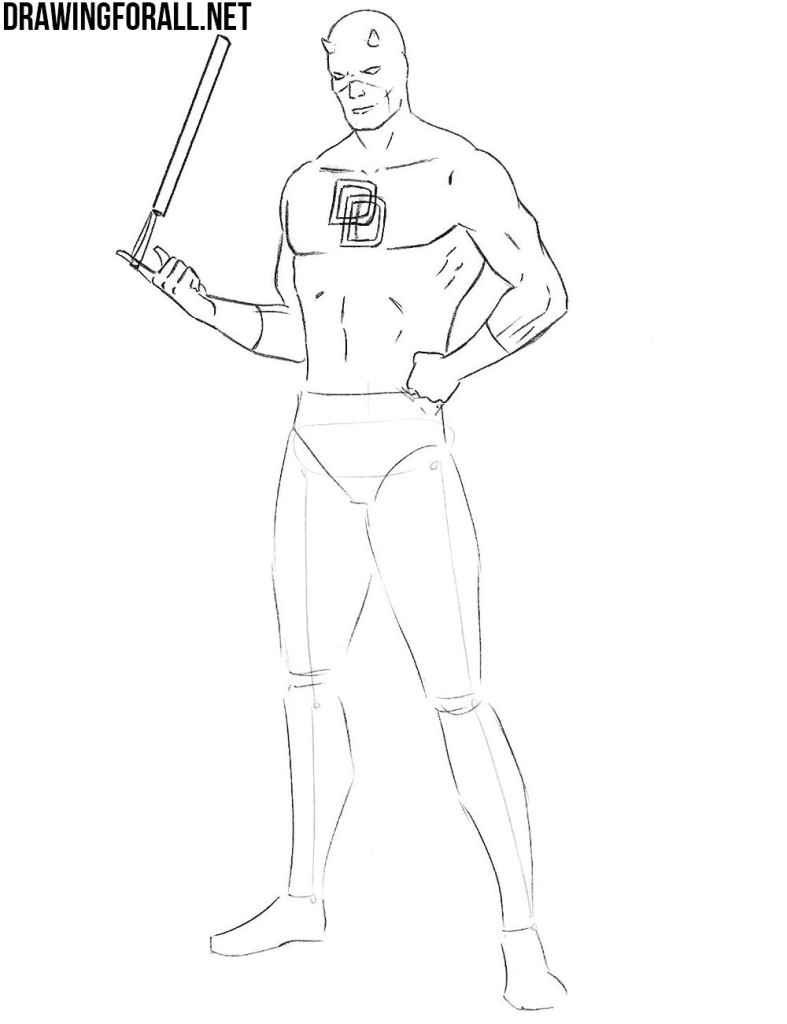 Let’s go down a bit and start working with the lower part of the Daredevil body. First draw shorts with folds. Next, draw the leg muscles erasing all the extra lines from the first steps. Draw the lines of the shoes and add some folds to the shoes. 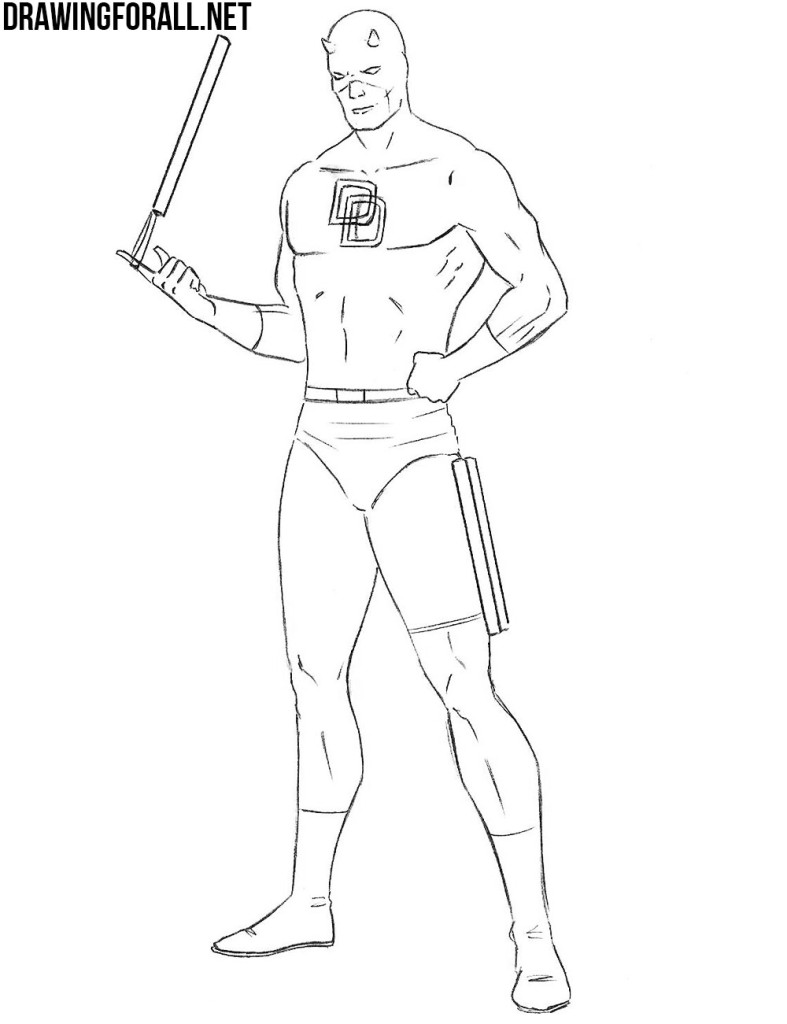 Let’s add shadows to our Daredevil. First of all draw the outlines of shadows that look like big spots. Then paint the shadows in solid black. In order to make softer shadows, use classic shading.