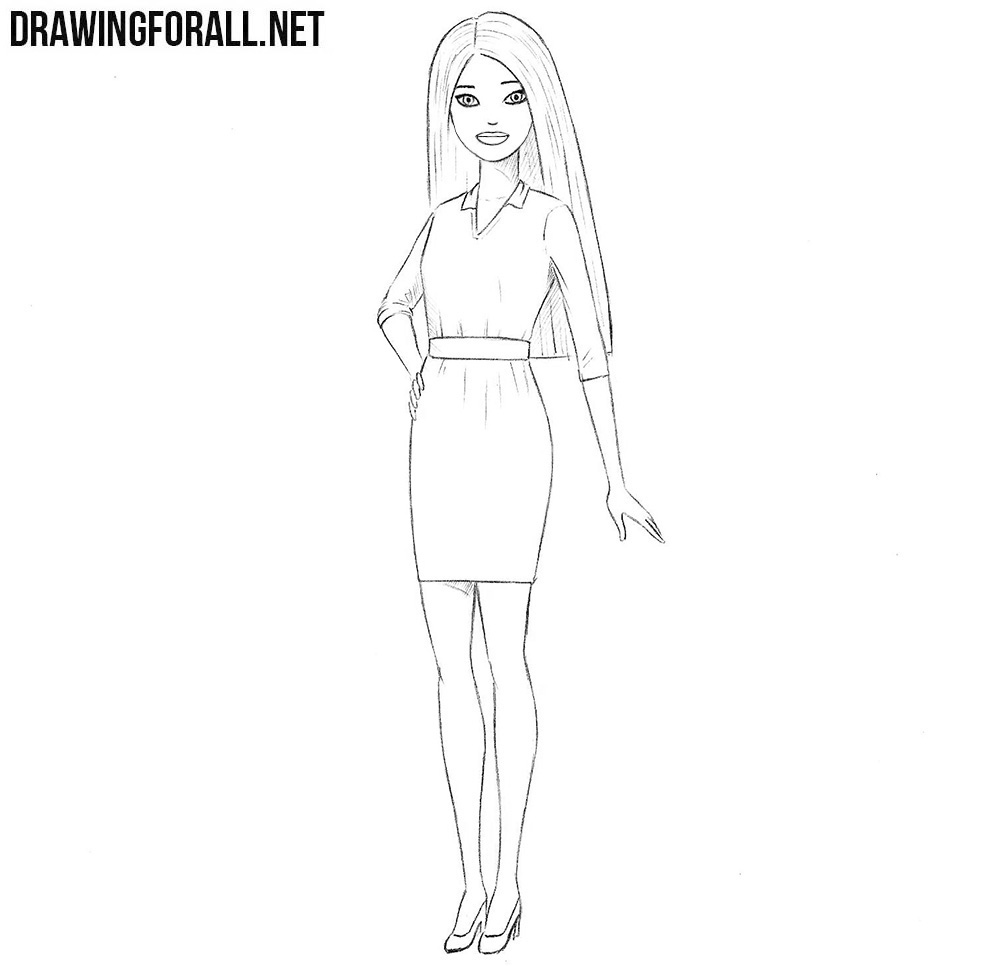 Who is the most famous doll of all time? Of course, it’s Barbie, a doll invented in the middle of the 20th century and known all over the world. Many of you may have played or are now playing with this doll. And in today’s drawing lesson, the team of Drawingforall.net decided to show you how to draw Barbie step by step.

Barbie is made taking into account almost all the features of the human body. So let’s draw the skeleton of an ordinary human. Sketch out the head in the form of an oval. A little lower depict the spine, on which the thorax and pelvis are located. Recall that the woman’s pelvis are slightly wider than the shoulders, unlike the pelvis of a man. 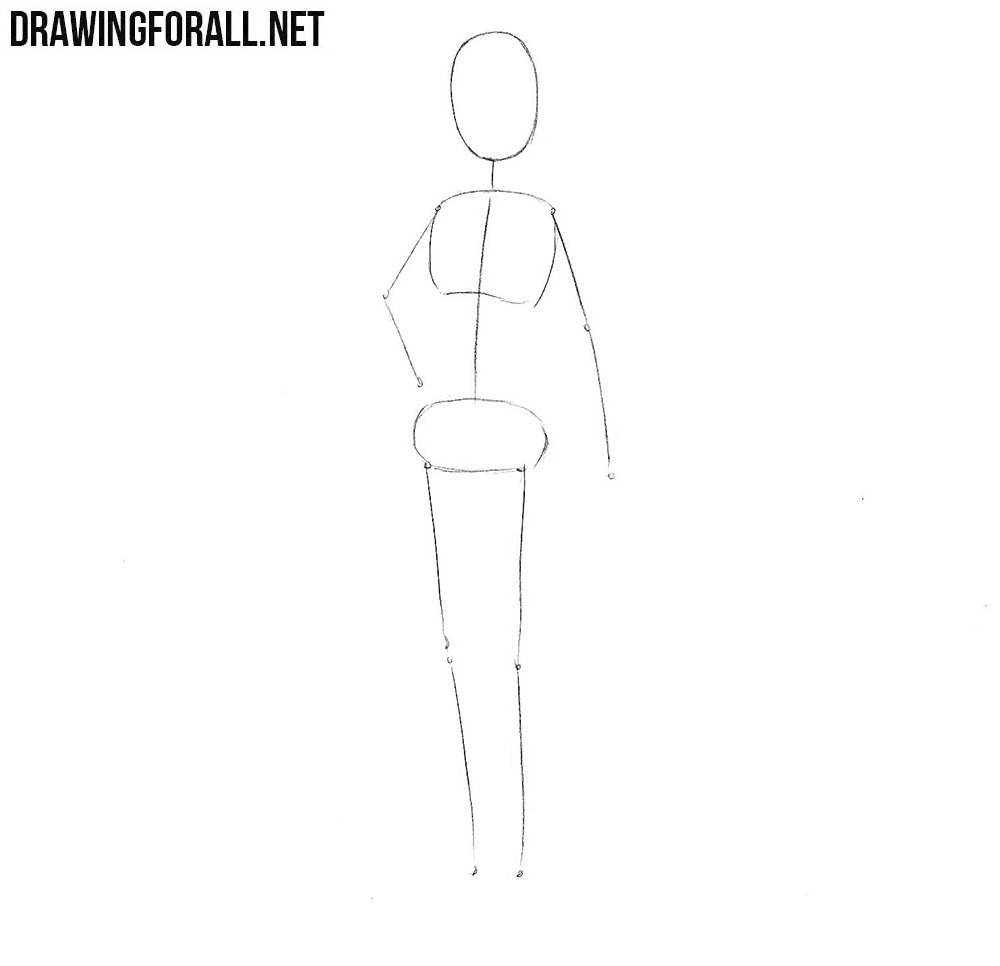 Sketch two lines that intersect at the center of the face, where the bridge of the nose is located. Now draw the neck in the form of a cylinder. Next, outline the torso, which narrows at the waist. Sketch out the arms in the form of cylinders and shoulders in the form of circles. Next draw the legs, which are wide in the hips and taper to the knees. 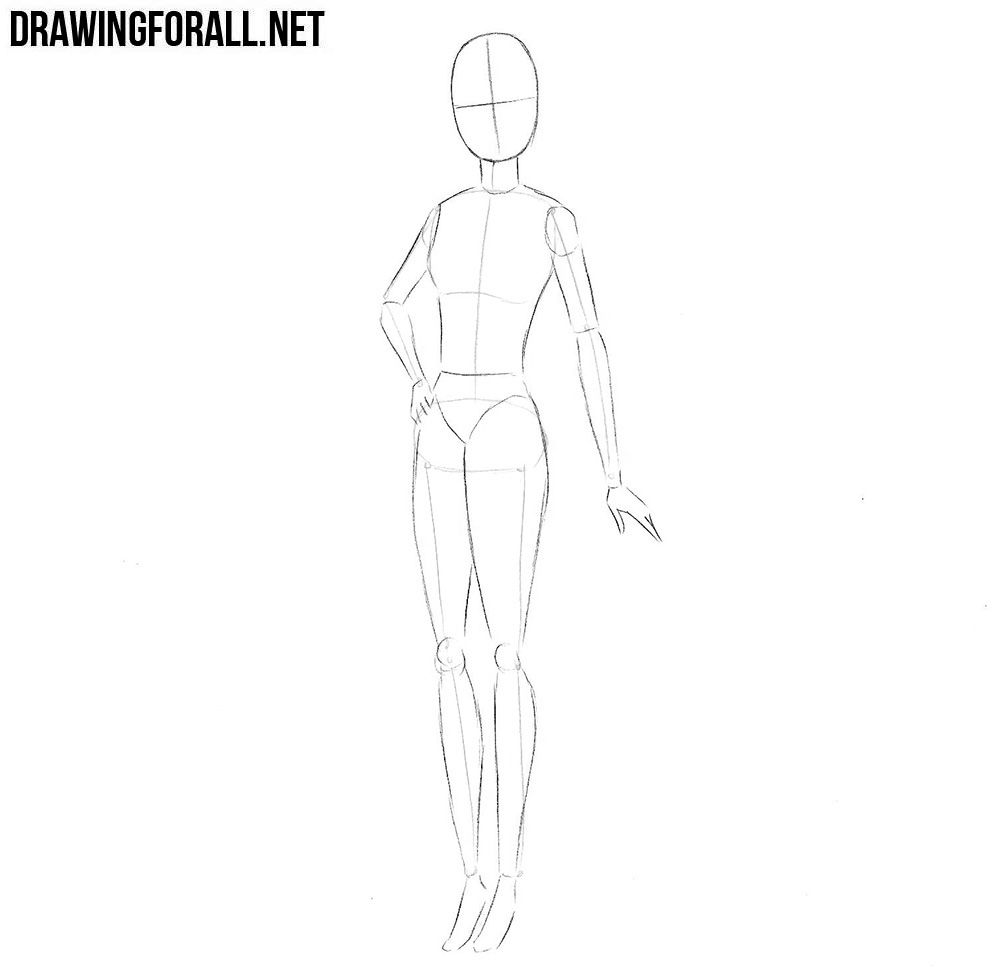 Draw the outlines of hair of our Barbie. Next, outline the eyes, located on the vertical line from the previous step. A little lower we draw a small nose and plump lips. At the end of the step draw the outlines of the dress and shoes. So, if your Barbie sketch looks like this, then you are doing everything right. 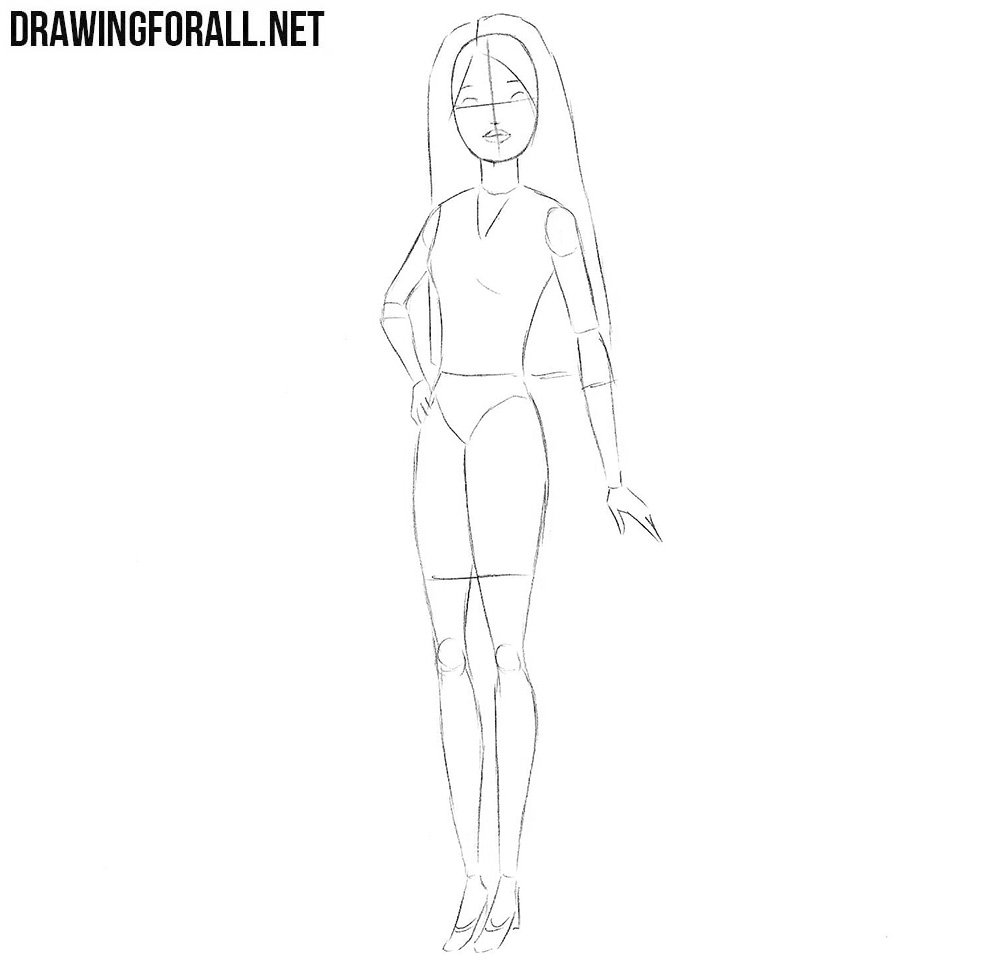 Now let’s work with the details. Carefully draw out the outlines of the eyes and pupils. We make the lines of the nose and lips clean and smooth. Remove all unnecessary guidelines from the face of our doll. 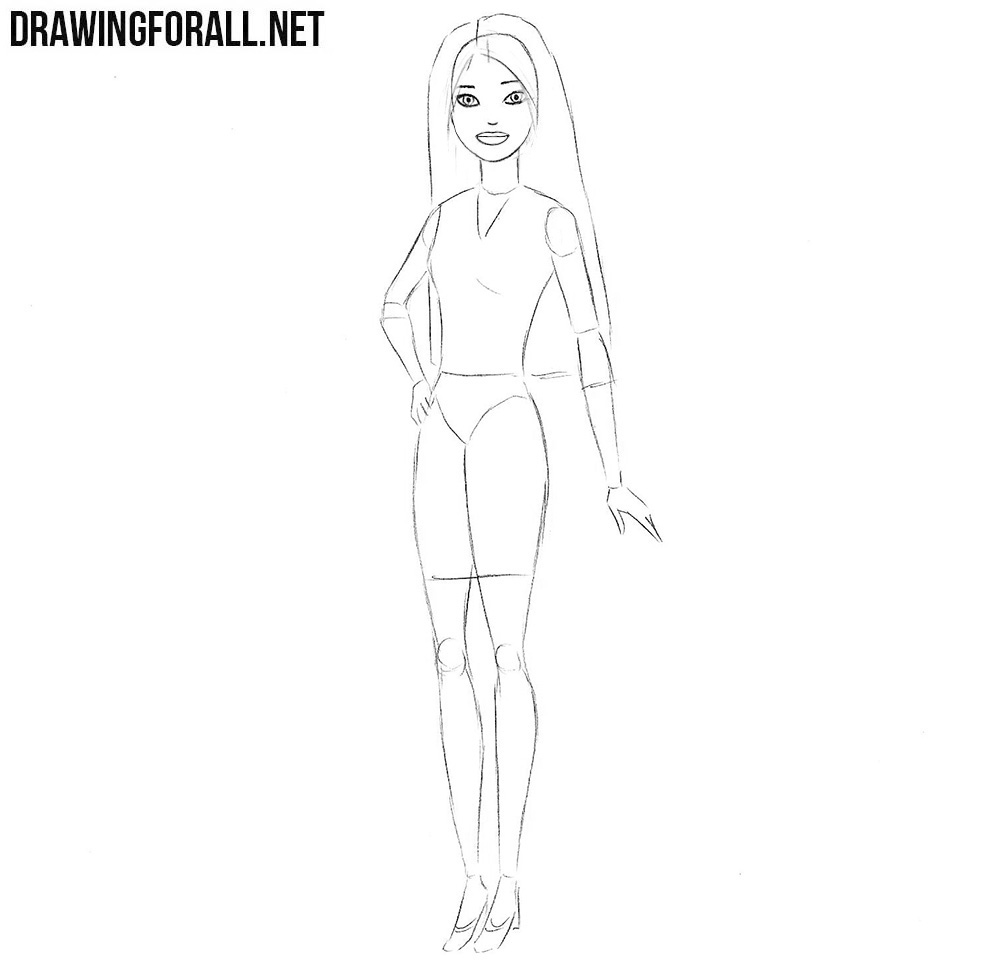 Now let’s take care of our Barbie’s hair. Make the outlines of the hairstyle clear, as in our example. Then add long and light lines that will make the hair more realistic. 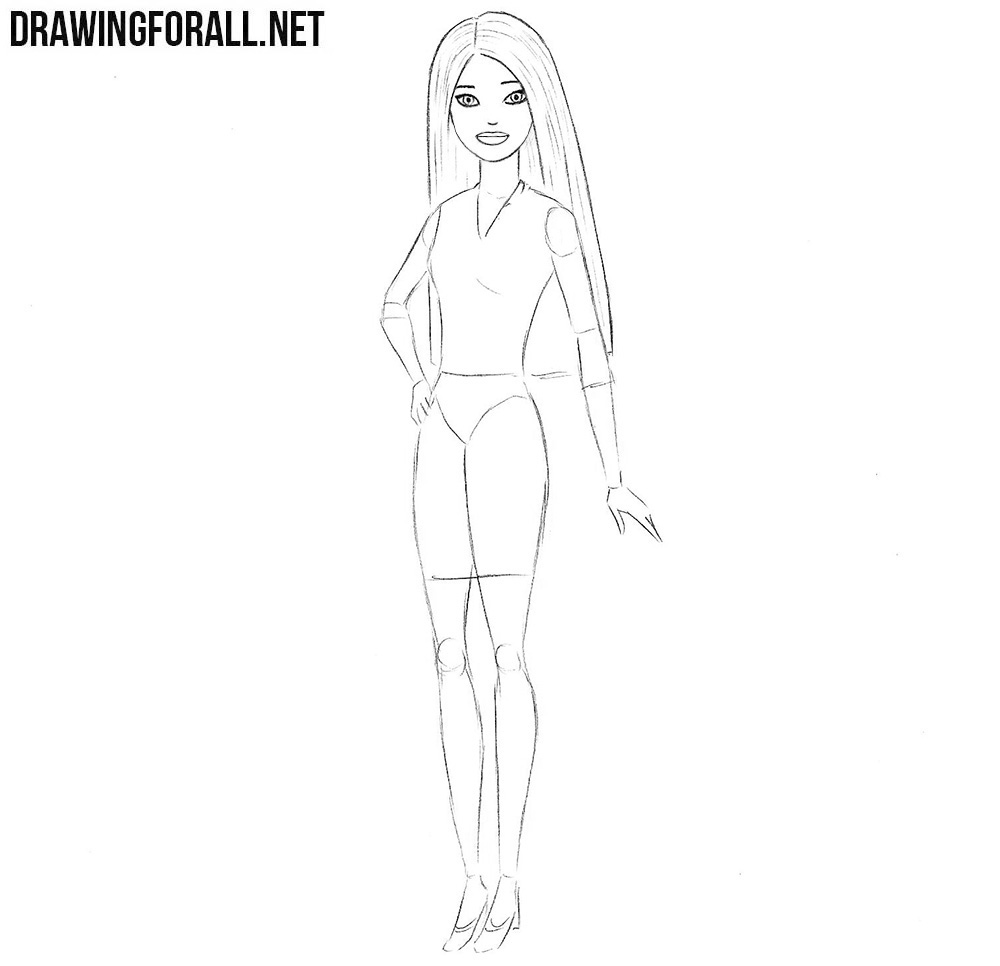 Removing guidelines trace the torso of our Barbie. Draw a neat collar and add wrinkles to the dress. When drawing a torso, take into account the curves of the body under the clothes. 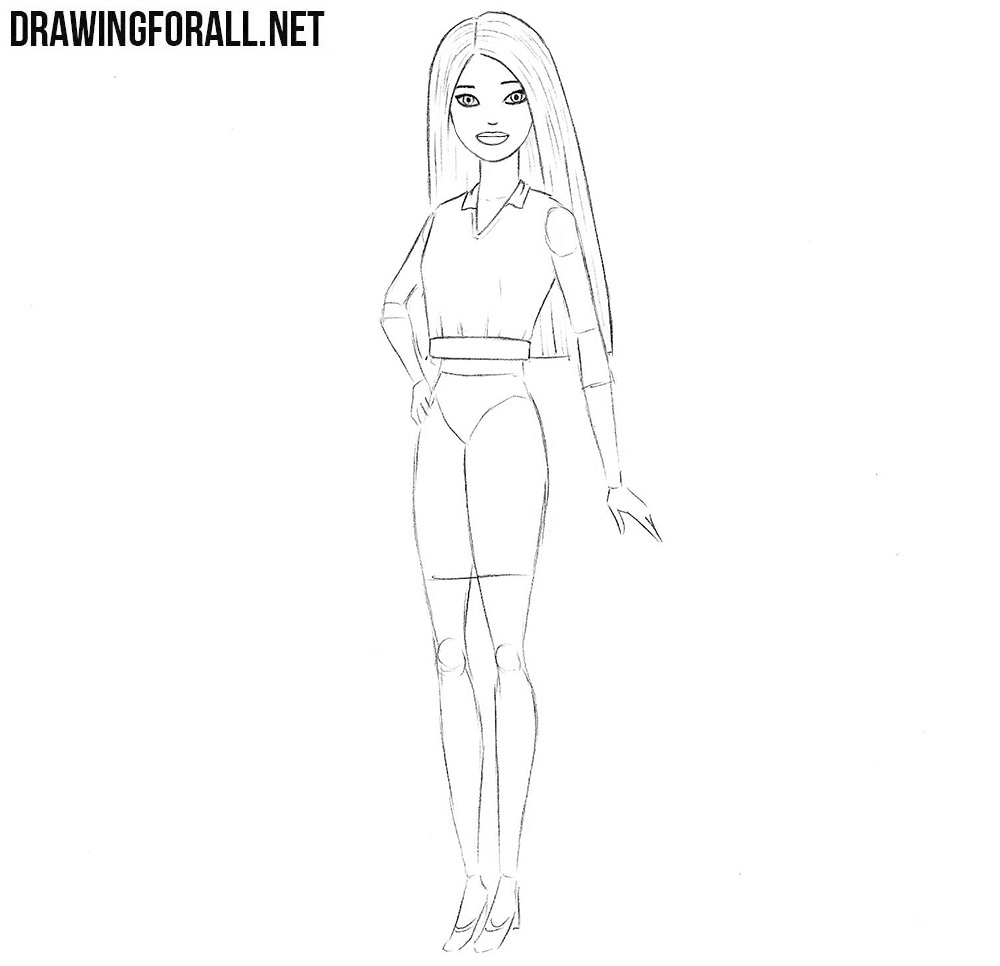 We continue to draw Barbie. Trace the sleeves and add some folds. Make the lines of  the arms clean and neat. And at the end of the step draw out the hands. If you did everything right, then at this step your Barbie drawing should look something like this. 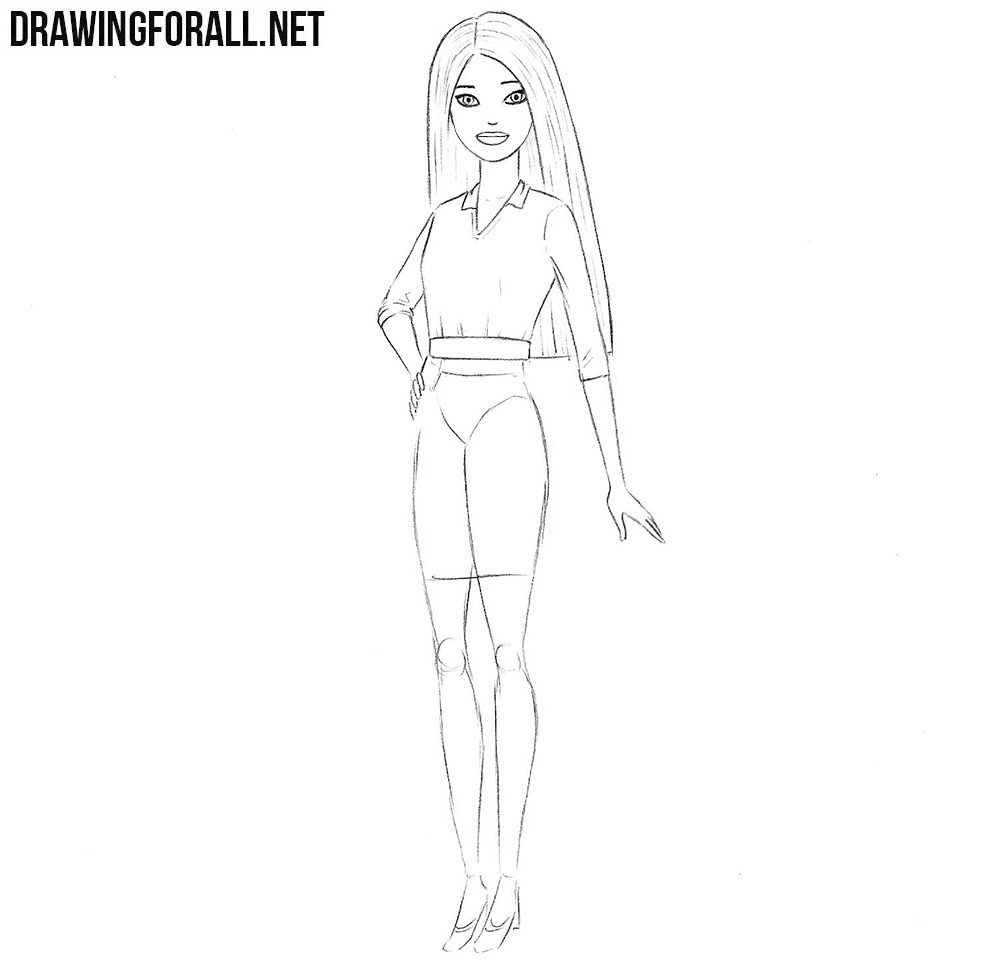 Now let’s move on to the lower body of our Barbie. Continuing the lines of the torso, trace the lower part of the dress. Add the necessary creases. Draw the legs as in our example and remove all the guidelines from the Barbie drawing. 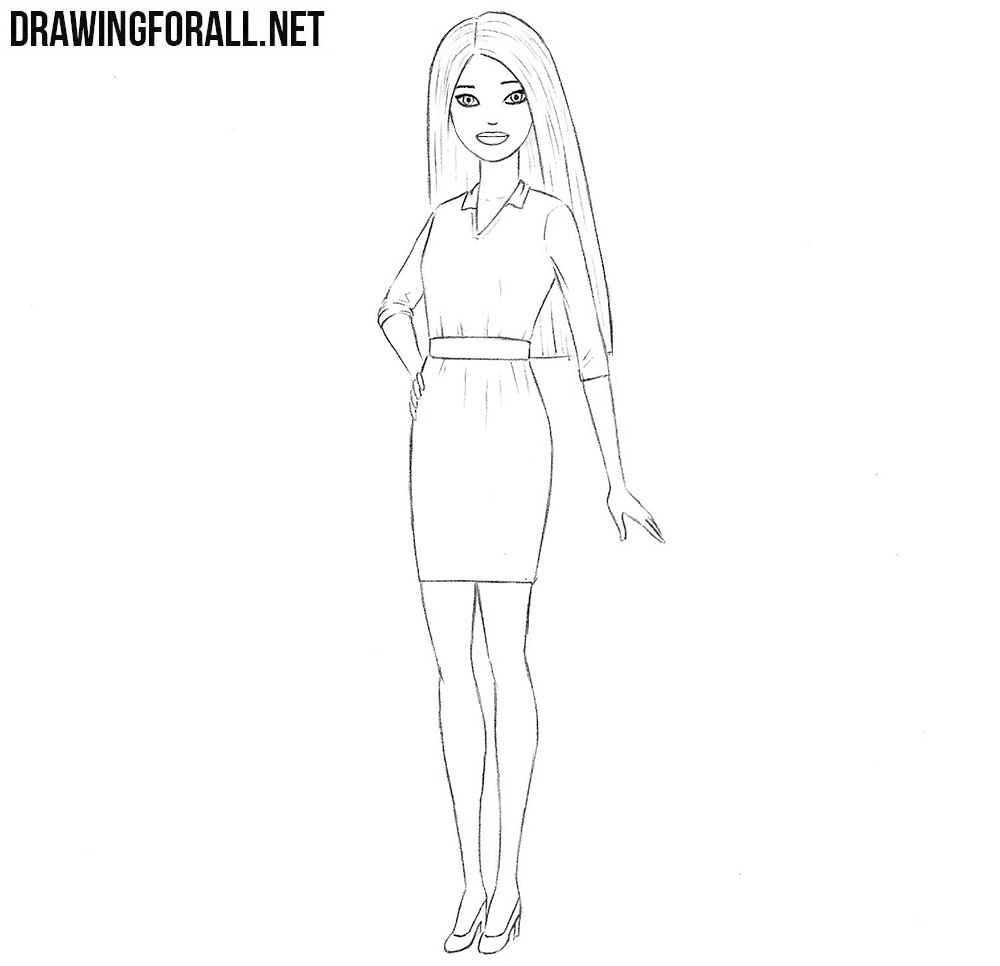 In order to give your Barbie drawing more volume, we need to add shadows. They are drawn using hatching, and lie in areas where the light does not fall. To darken the shadows, simply add some more layers of hatching over the first layer. 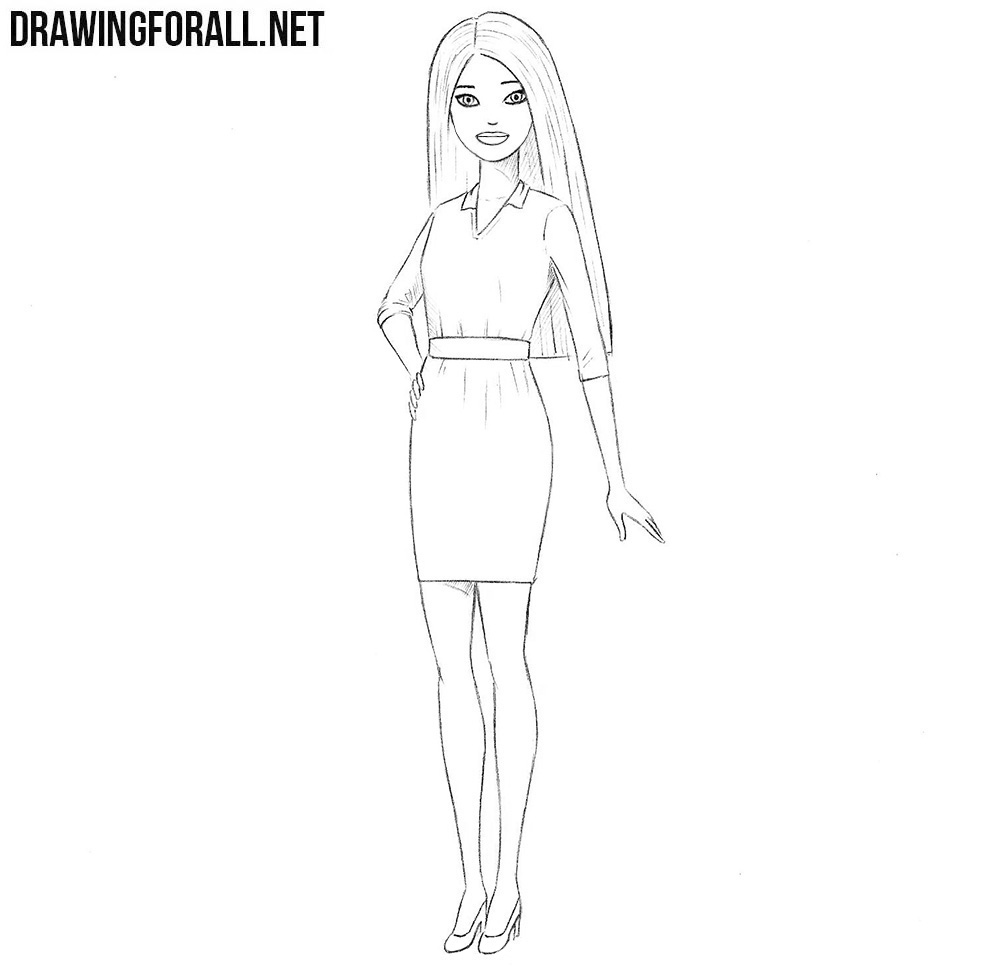 So, it was a sketching guide about how to draw Barbie, that was created by the artists of Drawingforall.net. Let’s remind about our pages in social networks – don’t forget to subscribe so you don’t miss out on any new lesson. In our pages in Pinterest, Facebook and Twitter, we constantly publish announcements of our upcoming articles, shortened versions of existing instructions and just interesting artworks from the artists of Drawingforall.net.