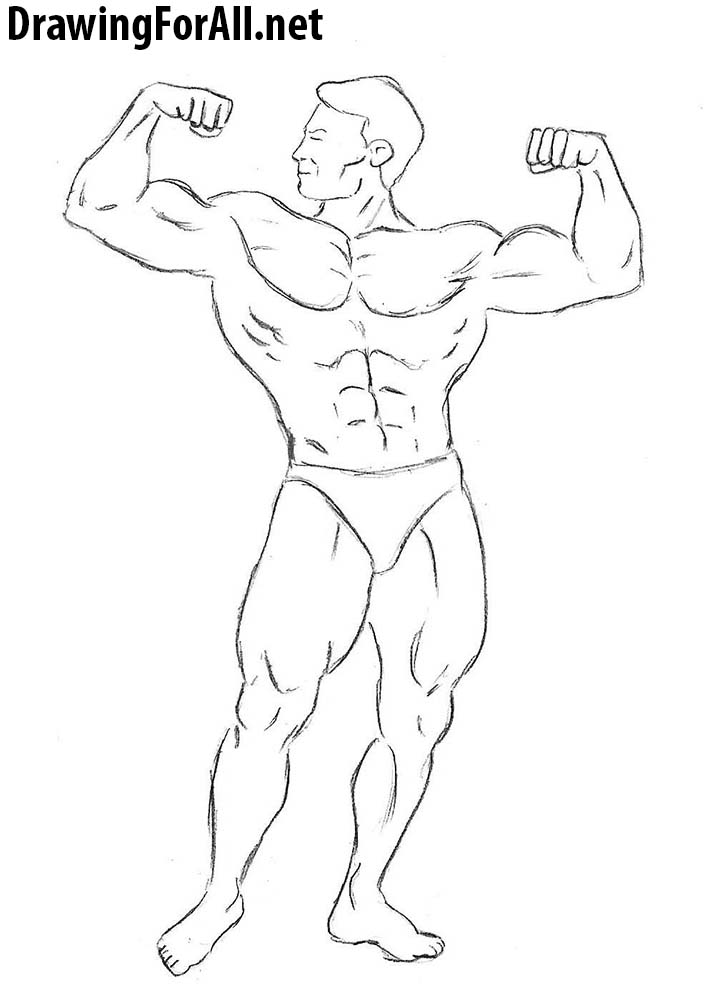 Hello, dear readers! Today, we start a new drawing lesson in which we will focus on how to draw an athlete. It should be noted that the work of our artists, which you can see at the beginning of this article is in some measure a golden mean between difficult, academic drawing and absolutely primitive technique of drawing. We have tried to make such a difficult figure could even draw a budding artists. So, let’s start and learn how to draw a bodybuilder for beginners!

We begin, as always, with a stickman – a man of the circles and sticks, which we draw in order to indicate the proportions, shape and position of our character on the sheet of paper. We draw a man, so we advise to rely on the rules of the image of a male figure, which we drew in the lesson on how to draw a man.

However, there are significant differences. Firstly, the shoulders are significantly wider (it becomes apparent in the next step). The head is an ordinary oval, as in all other drawing lessons. The lines of the body are also made by gentle pressing on the pencil. 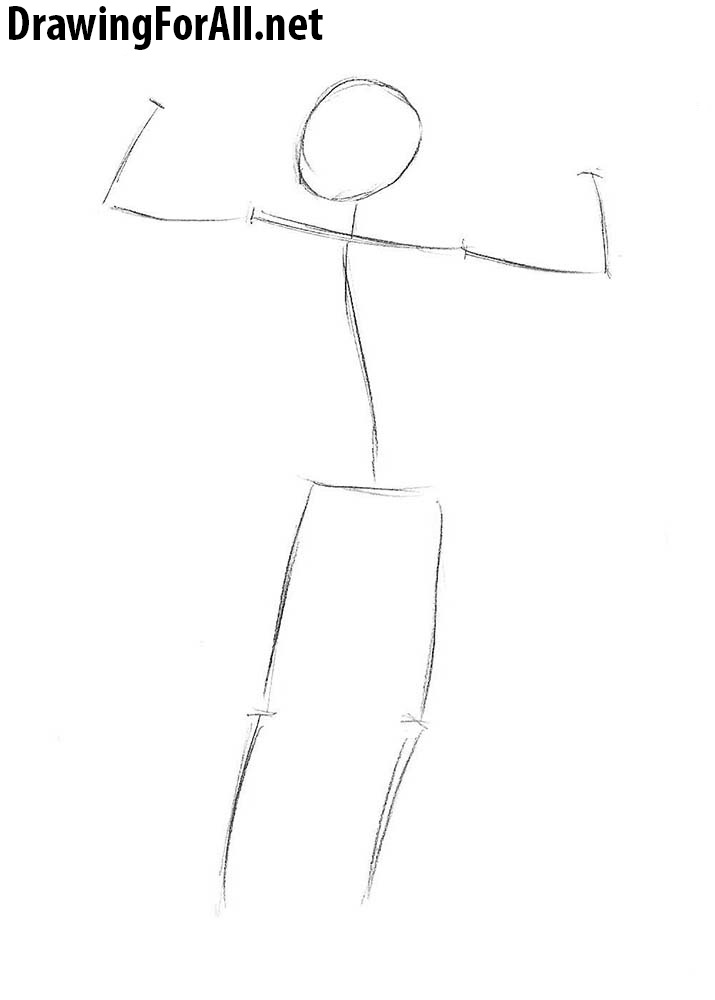 On the one hand, this step is the most difficult of all, we have in this drawing lesson. And on the other – it is very difficult to mistake in drawing the muscles of today’s character. Each arm is represented by two bulging roundness – is the deltoid muscle of the arm and biceps. Forearms, as you can see, are narrowing from the elbow to the wrist area.

The torso has a pronounced bend towards the waist. The area of the pelvis should be drawn in the shape of a triangle. Then draw the legs, that are expanding in the middle of the thigh and calf muscles, and are narrowing in the area of knees and ankles. 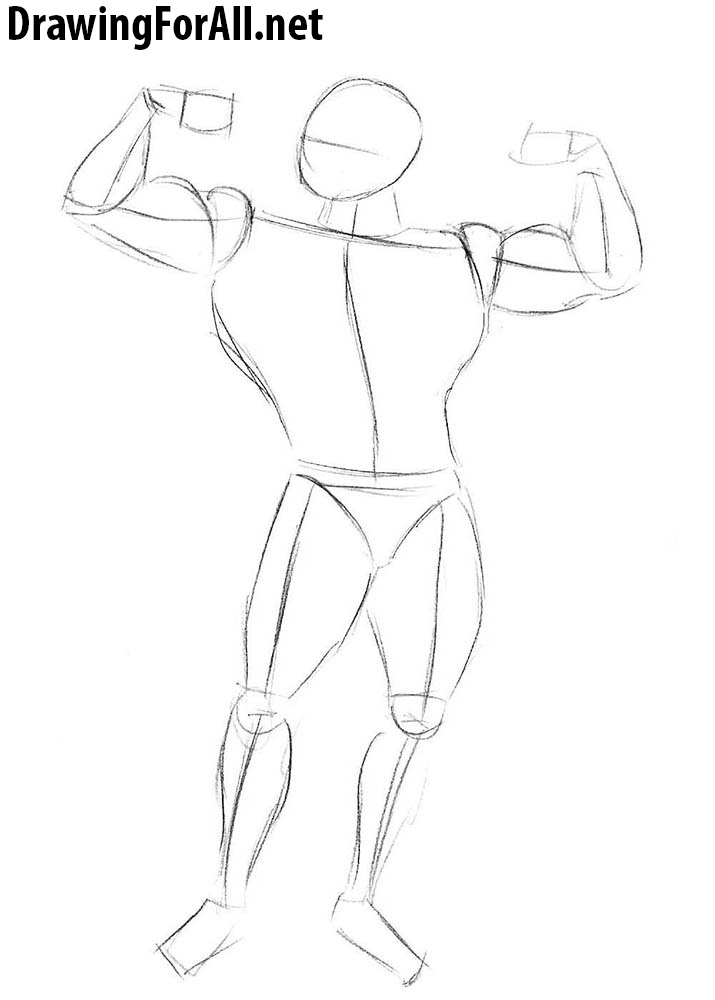 This step is very simple, but nevertheless very important. Here we outline the cheekbones, the chin and the nose of our athlete. Also denote the ear, and the contours of the hairstyle. Do not forget about the important rule: the eyebrows are situated parallel to the upper tip of the ear, and the tip of nose is parallel to the lower tip of the ear. 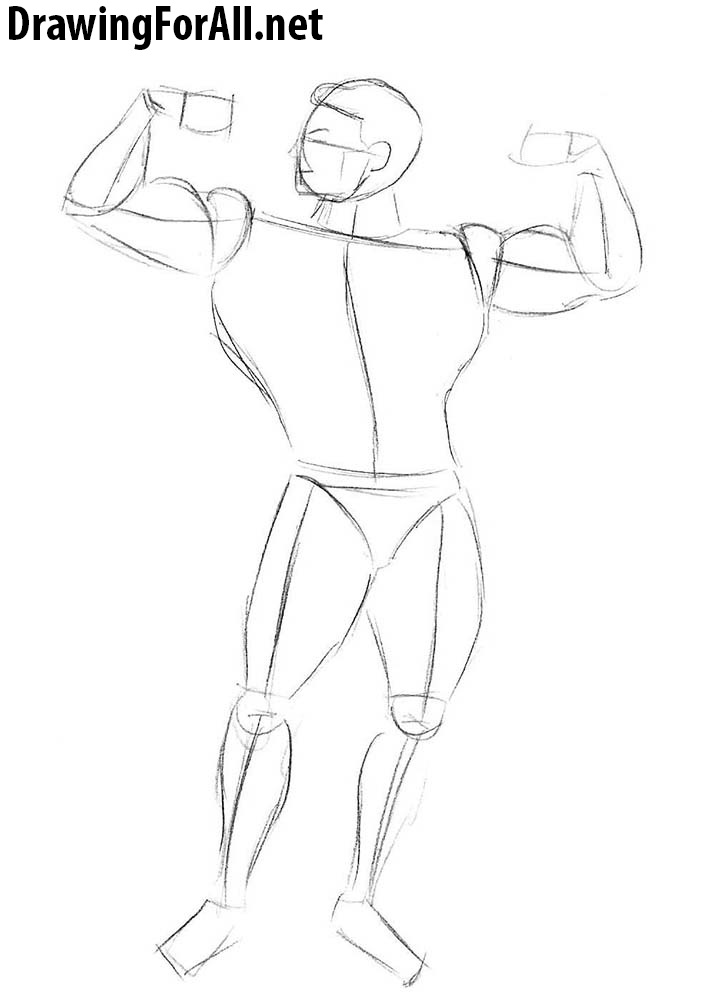 Erase extra guidelines from the head and draws the facial features. Draw slightly smiling mouth and nasolabial folds. Note that unlike the many other drawing lessons, for example on Jax or Wizard, here we can see very few details. This is one reason why this tutorial are for beginners. When you’re done with the face of an athlete, go to the next step of the tutorial on how to draw a bodybuilder for beginners. 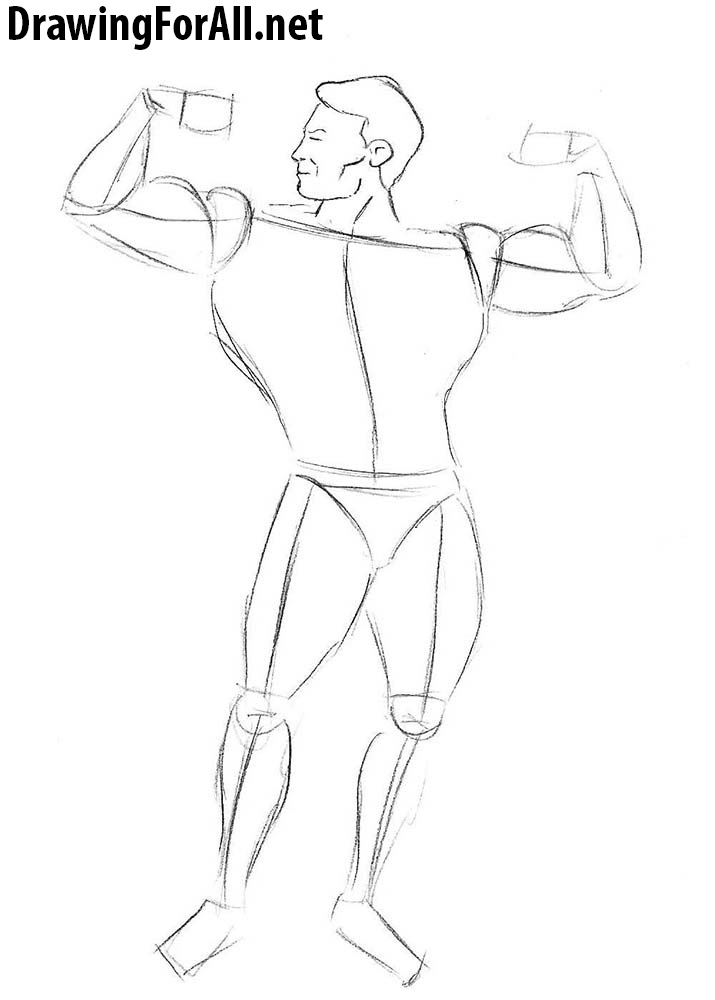 Here we draw a mighty body of our hero. At the top of the body draw two very large pectoral muscles (the correct name – pectoralis major). They look like two massive convex plates. At the junction of the muscle in the middle, we see four short smooth lines. Above the chest muscles in the neck area, also draw a pair of oblique lines.

Below them draw relief, well-defined muscles of the abdominal muscles. The contours of each “cube” are smooth and slightly curving. At the sides of the abbs draw a pair of oblique lines – is the actual obliques. 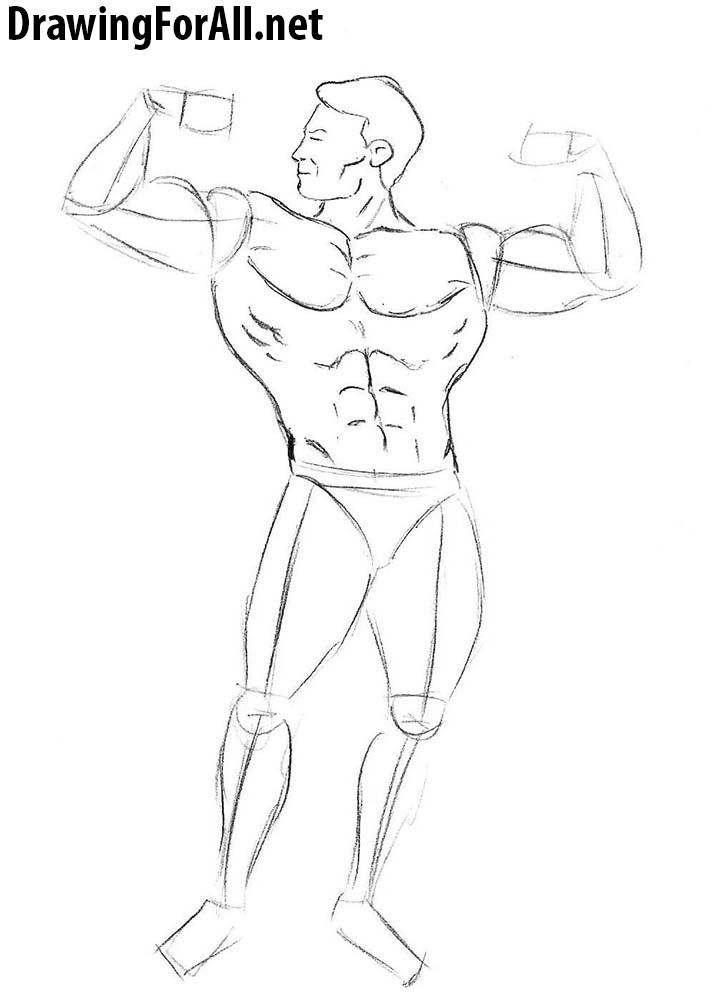 Our bodybuilder begins to acquire the completed look. Now we will work on his arms. Circle the contours of the biceps (the most visible muscles in this position) and triceps in opposite sides of the arms (in fact, the biggest muscles of the arms). 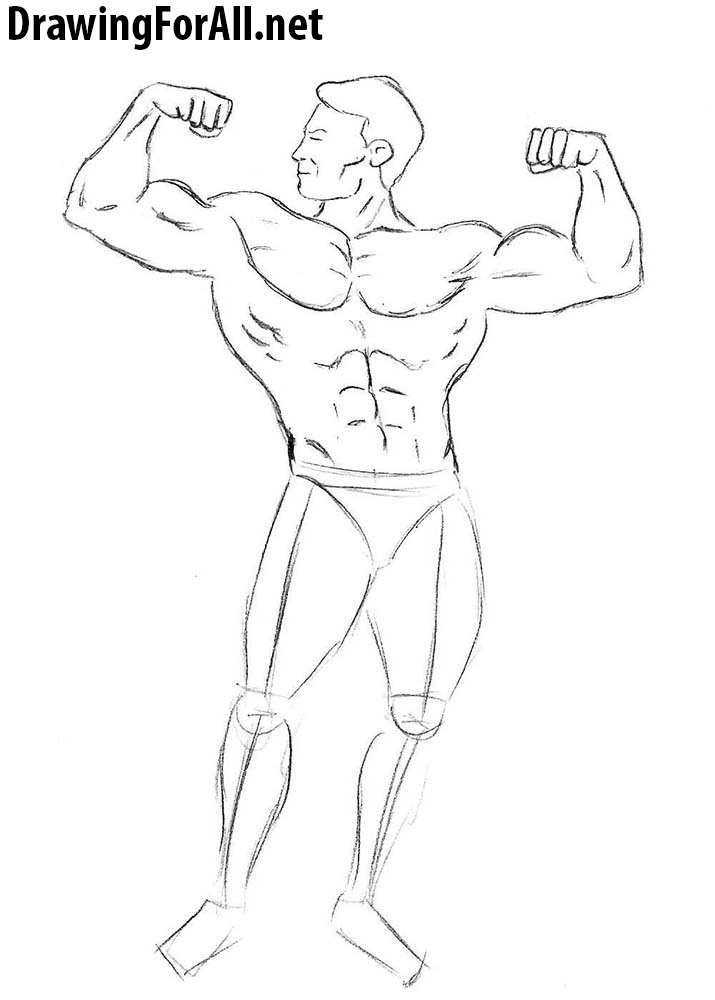 We finish our drawing lesson. Draw the cowards, erase from them extra guidelines and sketch out the muscles. The femoral muscles are designated by internal and external contours. Internal lines converge to the knee joints. Then draw the knee joints. Draw the lines of the calf muscles.

The and of this step draw toes and outlines a couple of flowing lines just above the feet. 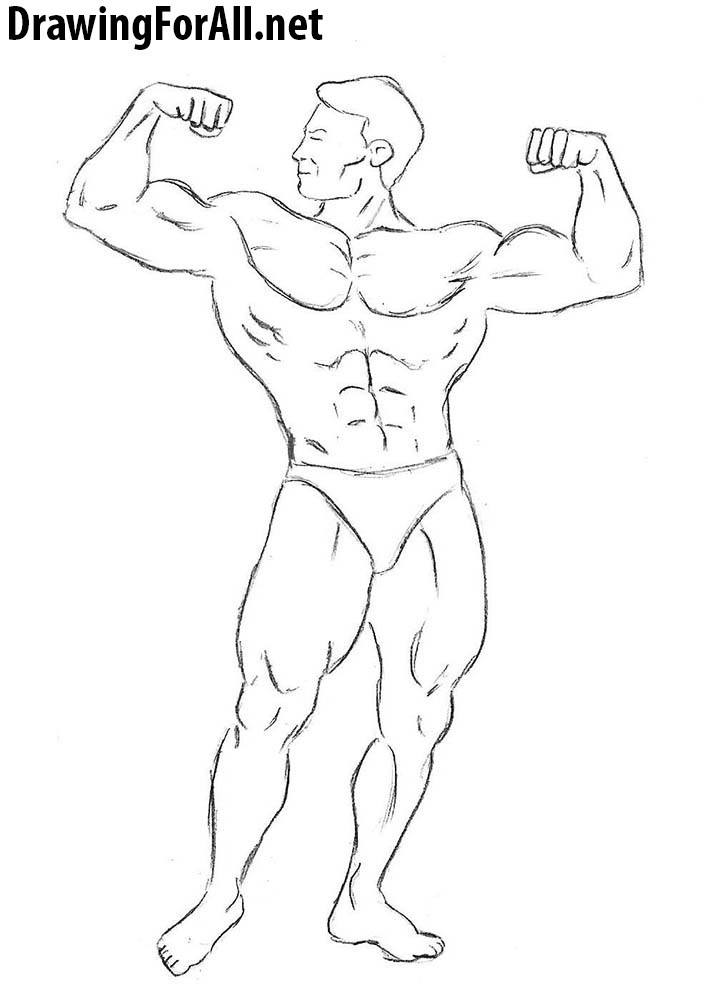 Drawing Lesson, in which there was a speech about how to draw a bodybuilder, as always, was prepared by artists and editors of DrawingForAll.net. Do not forget to subscribe to our us in different social networks, such as Google Plus, Facebook, Pinterest and etc. And don’t forget to share this lesson with your friends. Good luck!