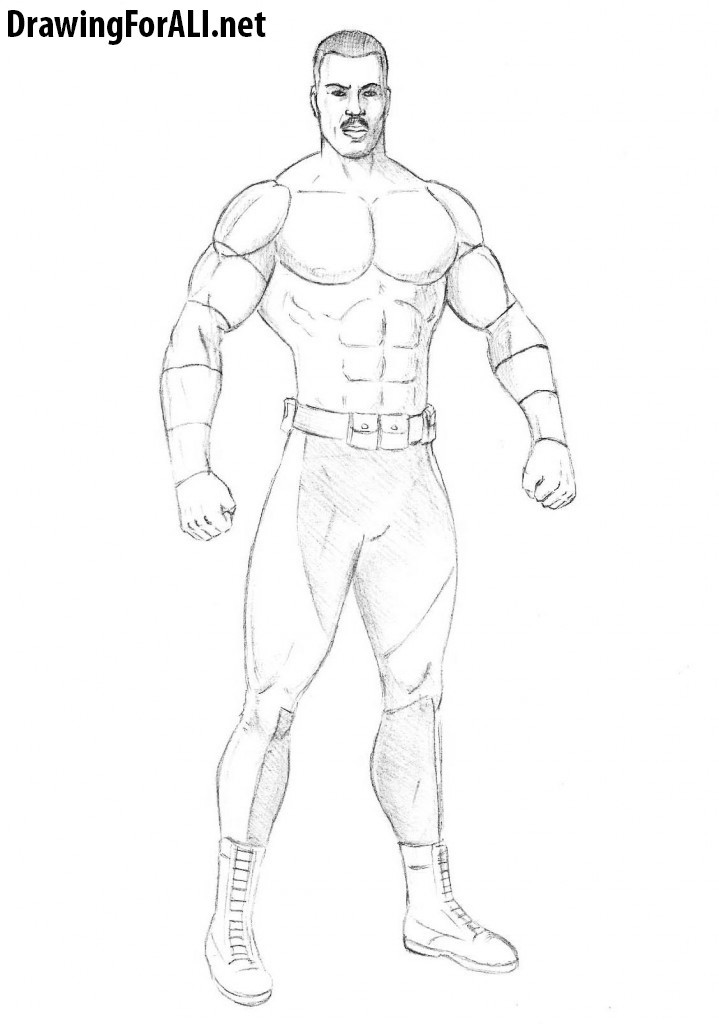 Let’s start with a stickman, ie man, needed to denote the main proportion of the character, his posture and position in our paper sheet. First we will outline the head in the shape of an oval and lines of the body of Jax. Pay attention to the posture – he stands straight, arms straight, the torso in half a turn and face looking at us.

We would like to remind you that in the theory the human growth is the sum of seven or eight his heads. Please note that its position is very similar to Sonya Blade pose, which we have drawn previously. 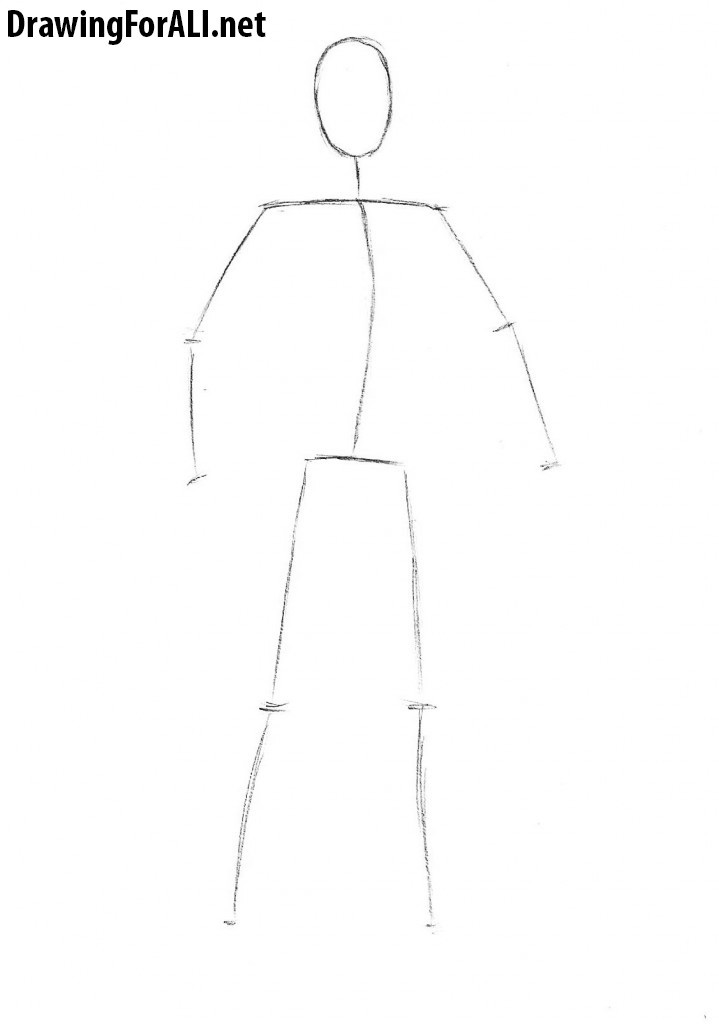 Now let’s work with the silhouette of Jax, but first mark up his head by a couple of lines, one of which denotes the vertical symmetry of the face, and the second – the eye line.

Under the head draw the cylinder of short neck. Then by light lines outline the contours of the body, which should narrow in the waist area. In the upper part of the body outline shoulders using ovals. Under the shoulders denote bulky upper arms and forearms tapering to the wrists.

Then outline the pelvis in a triangle from which we will draw the legs. Draw the thighs which expand in the middle and shins that narrow to the ankles. 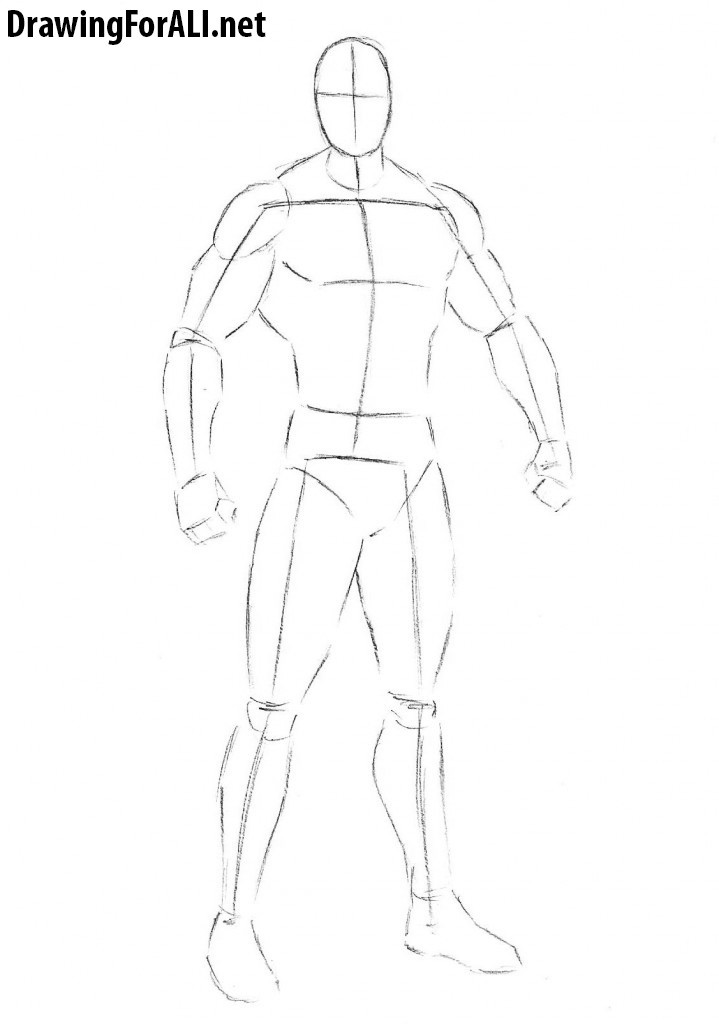 Very short step, especially when compared with the previous one. Here we will draw the guidelines of the face. So, here is the markup of the face from top to bottom:

We note an important point of this step – all facial lines is better to apply with light touches, so you could erase these lines later; 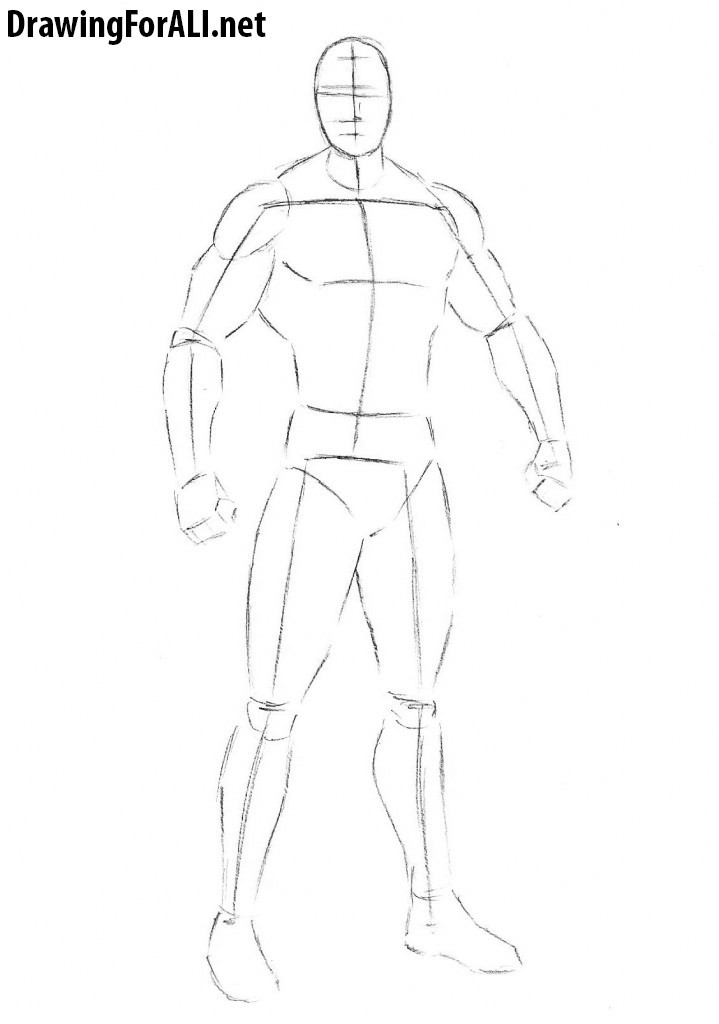 Using the markup of several previous steps, draw the contour of the nose (it is slightly concave in the middle of the line). Under the nose draw the outline of the compressed lips, the lower lip should be much wider than the upper. 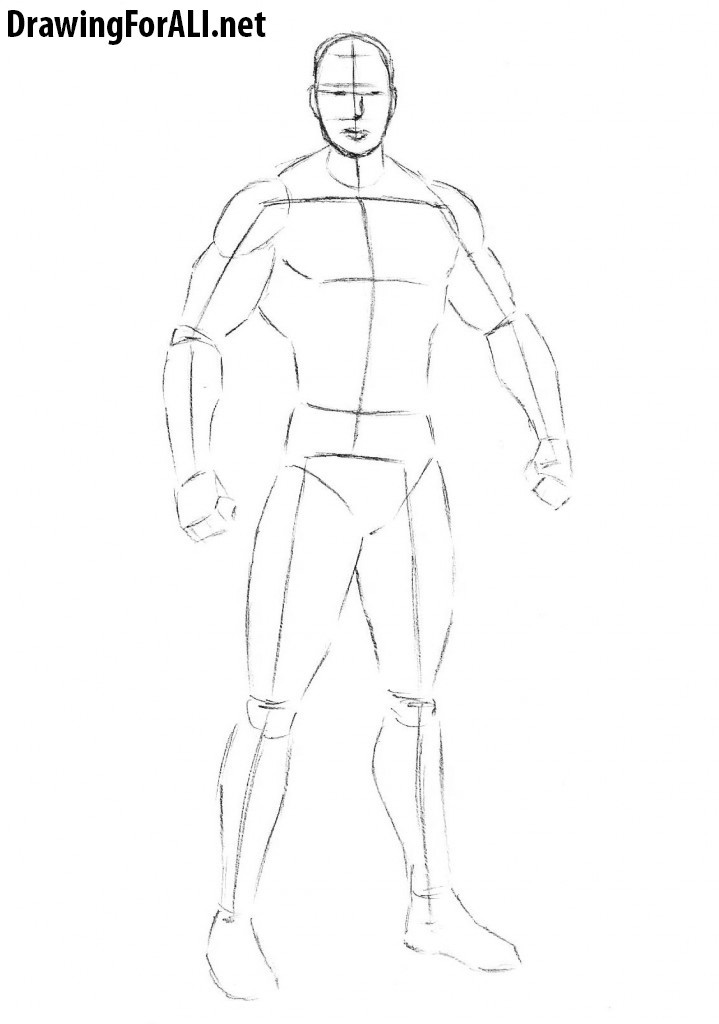 Here we finish the face of Jax. Using a smoothly curving shape draw the hairstyle, then along the guidelines draw facial features.

Using the thin, curved lines outline the eyebrows, the right of us goes into the nose. Circle the eyes, then the nose, mustache (they look like a right angle) and the mouth. Circle lines of the face, making them like in our example. 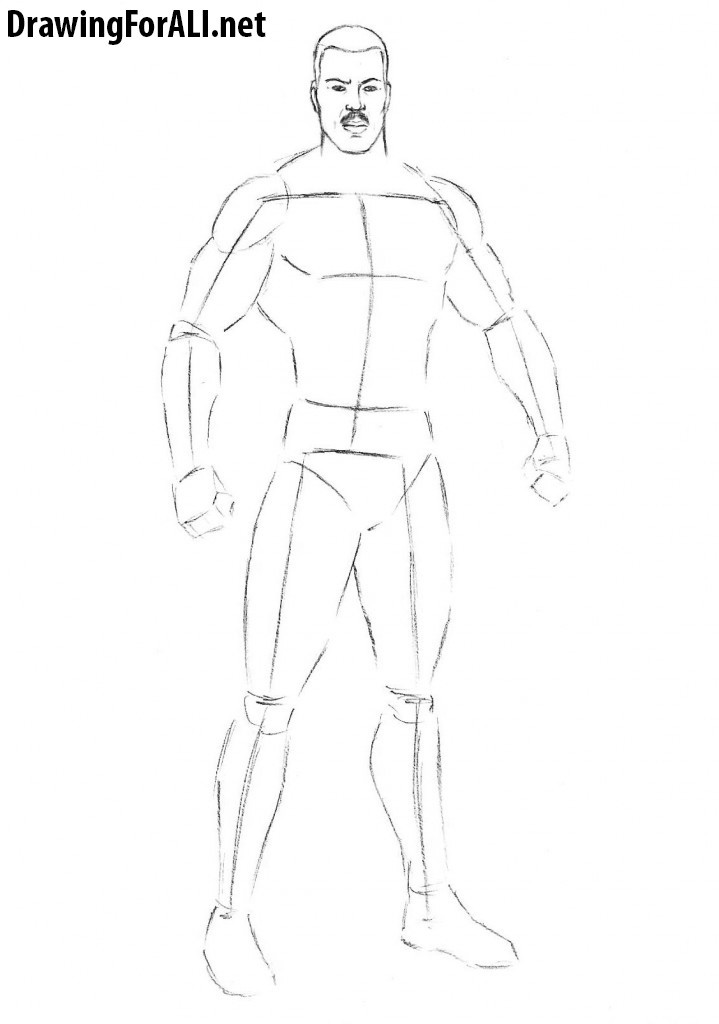 Now we go down below (as always we draw the details from top down) and draw following elements – neck and Adam’s apple, then circle trapezoid muscles – they connect the shoulders and neck. Draw chest muscles as broad, powerful plates. Draw the arms, that consist of deltoids, biceps and triceps and forearms.

Also in this step, we outline the contours of the fingers, clenched in a fists. Look down, if your drawing is similar to ours, then you can move to the next step. 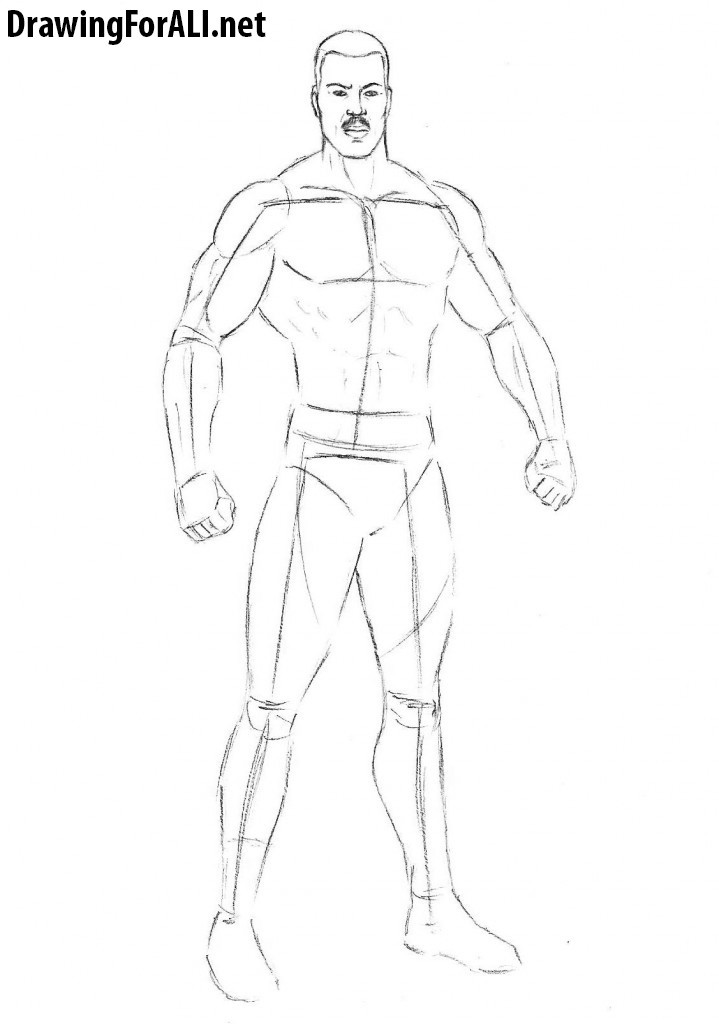 At this short step we want to remind you that on our website we have a tutorial on how to draw Goro. 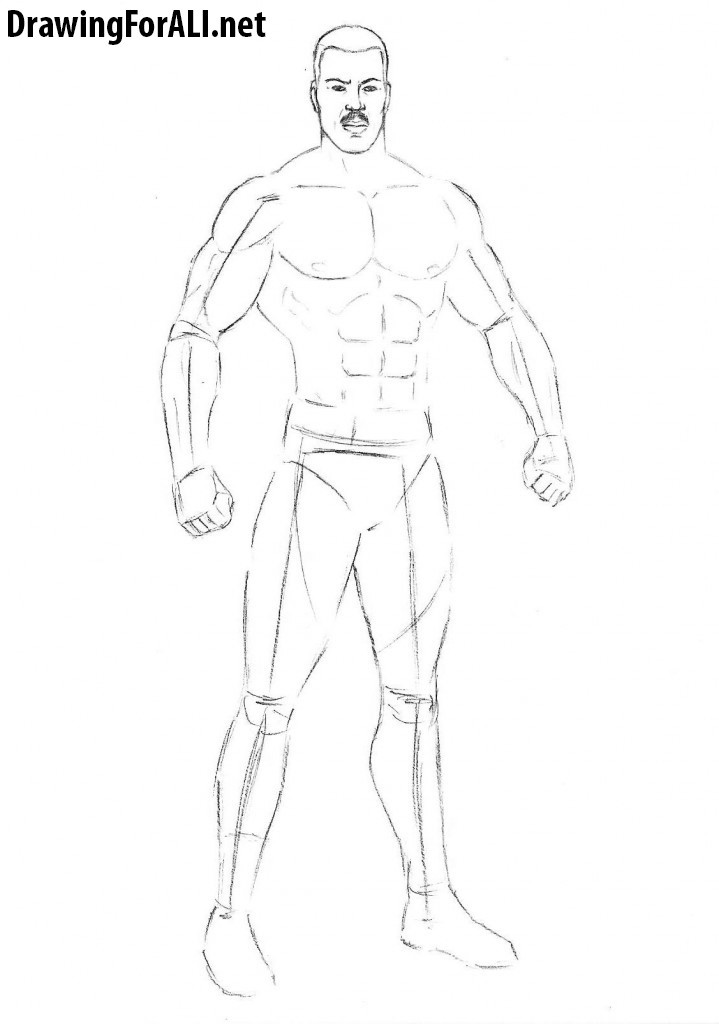 So, we continue the lesson in which we tell you how to draw Jax from Mortal Kombat. Erase the extra lines from the arms.

Circle the contours of these parts of the body by clear and confident lines. Then draw transverse lines on  arms, as in our example – do not forget that the arms of Jax are made of metal, and look like tentacles of Doctor Octopus. 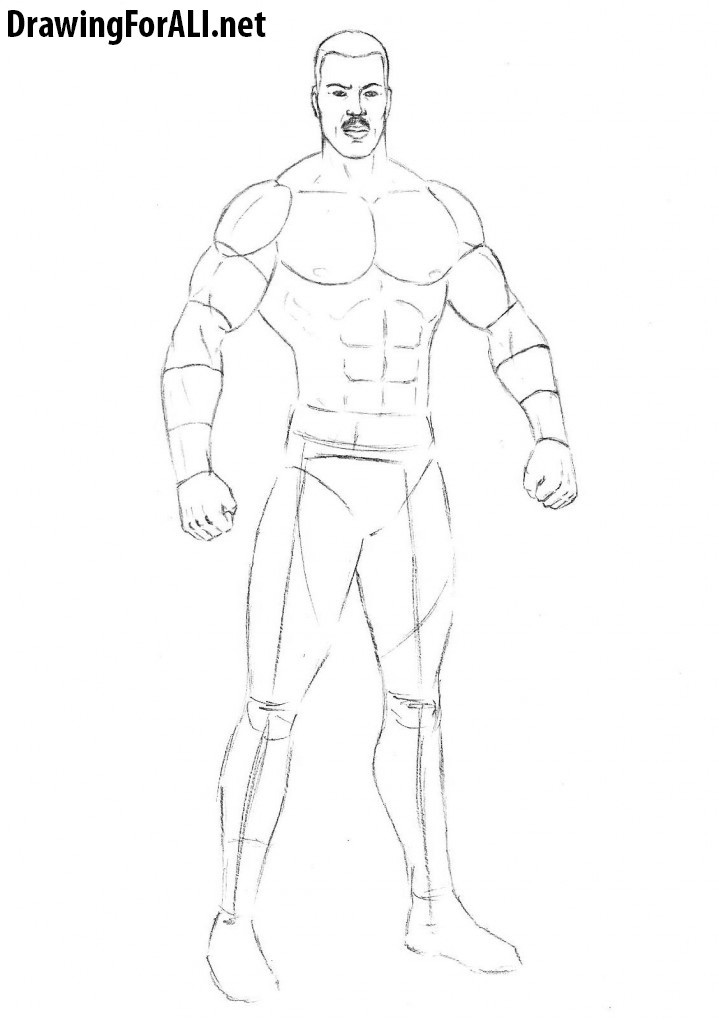 The legs unlike the arms are quite ordinary. First draw the belt with pockets – note the fasteners. Then erase extra lines from the pelvis, circle the contours of the black areas on the pants of Jax.

On the shins also draw lines of the black areas. Outline the location of the knees by simple lines, the draw the laces and soles of combat boots. 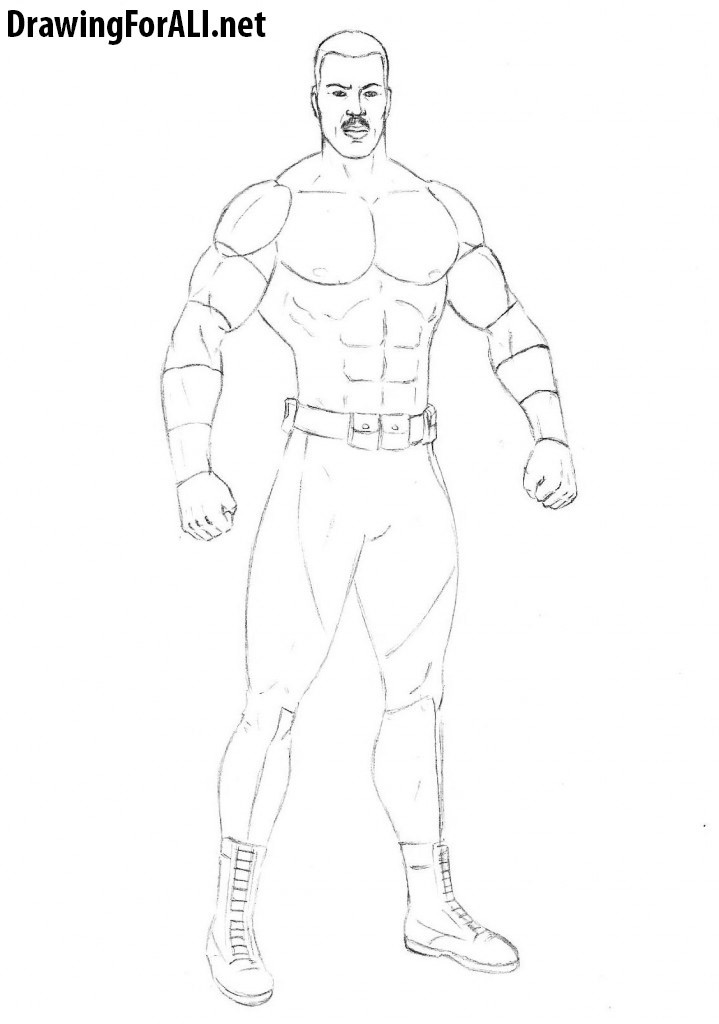 At the final stage we add the shadows. At first we, as always, define the source of the light, and thed start adding shadows to the areas where the light does not fall.

Remind, that we draw the shadow in two stages – first we outline the areas of shadows, then paint over it. To add shadows to Jax use classic hatching. Also don’t forget to darken the hair and areas on the pants. 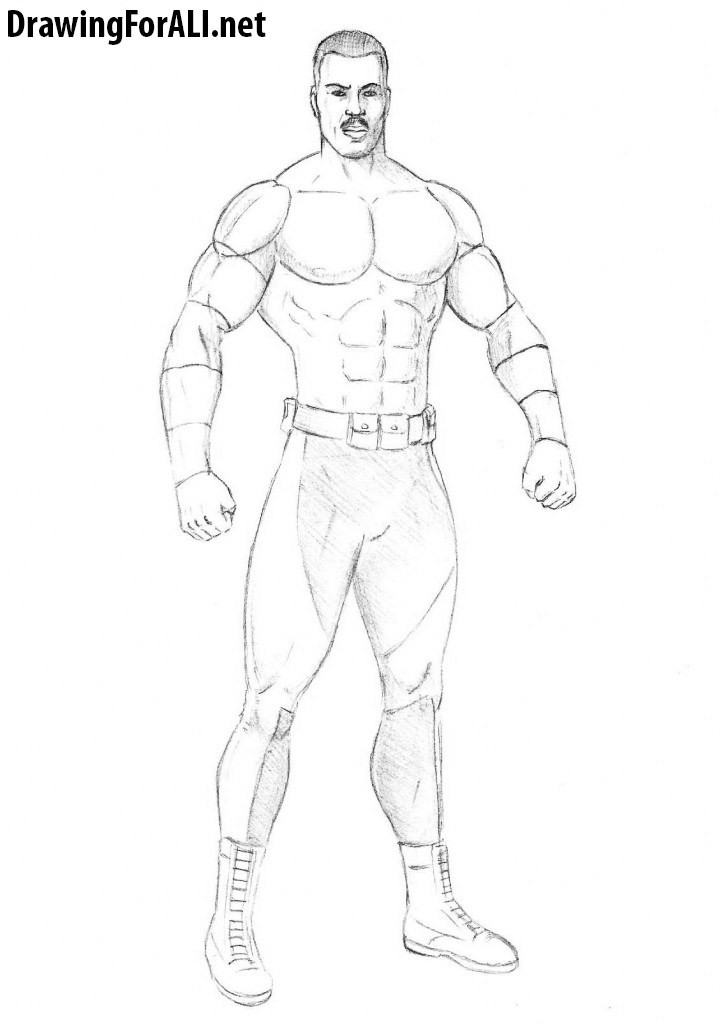 It was a lesson about the Mortal Kombat universe. If you missed it, we have drawing lessons for all the characters from this universe, such as Scorpion, Johnny Cage, Raiden and many others.