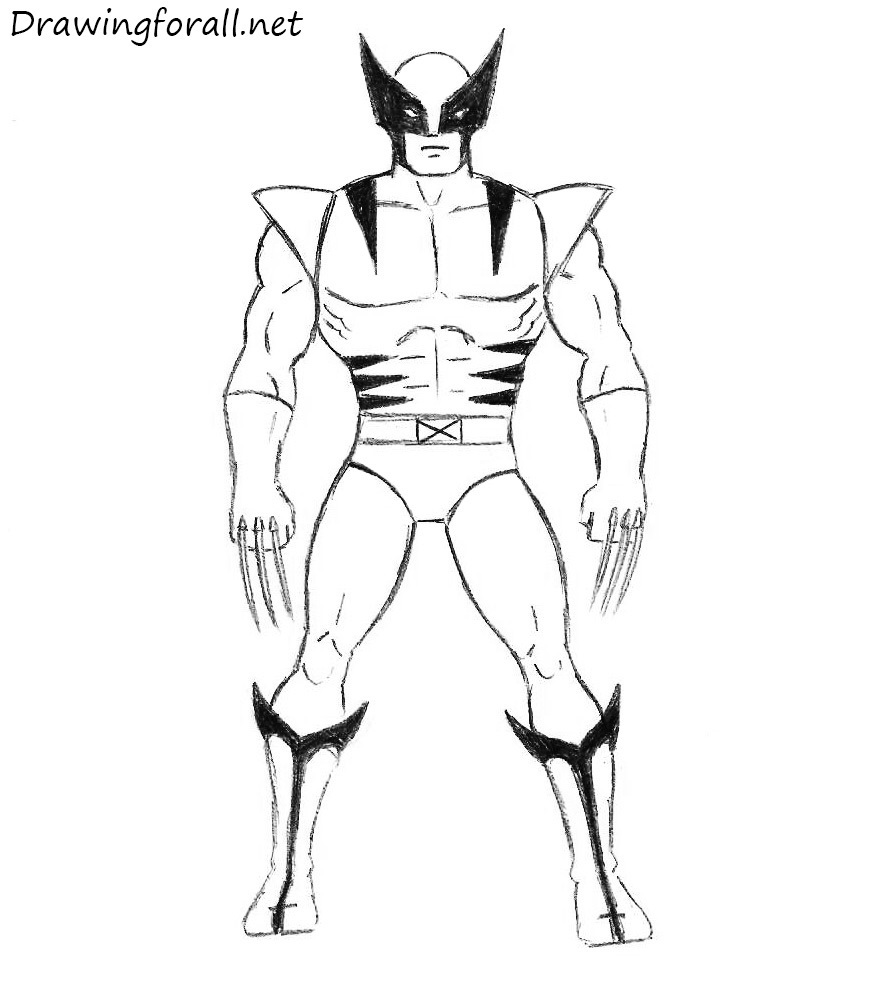 Hello, dear comics fans! Today we decided to do another lesson about our favorite character of Marvel Universe. Today we are going to draw wolverine. At our website we already have many lessons on how to draw Wolverine. But we decided that these lessons are pretty hard and not everyone cope with them. And so we created this tutorial. Here we will show you the most simple way to draw Logan. In this tutorial will be no shadows and complex lines. We will draw Wolverine in the classic yellow suit. So, let’s learn the easiest way to draw Wolverine!

As in our previous tutorials, for example in how to draw Ben Reilly, we need to draw a man made of sticks and circles. We draw this “stickman” to determine the position of the Wolverines on paper and not to be mistaken in drawing proportions. First draw a head using an oval. Then, using sticks draw spine and limbs. And as in previous tutorials, we recommend you to not press down too hard on a pencil. In the next steps we will need to erase all these guidelines. 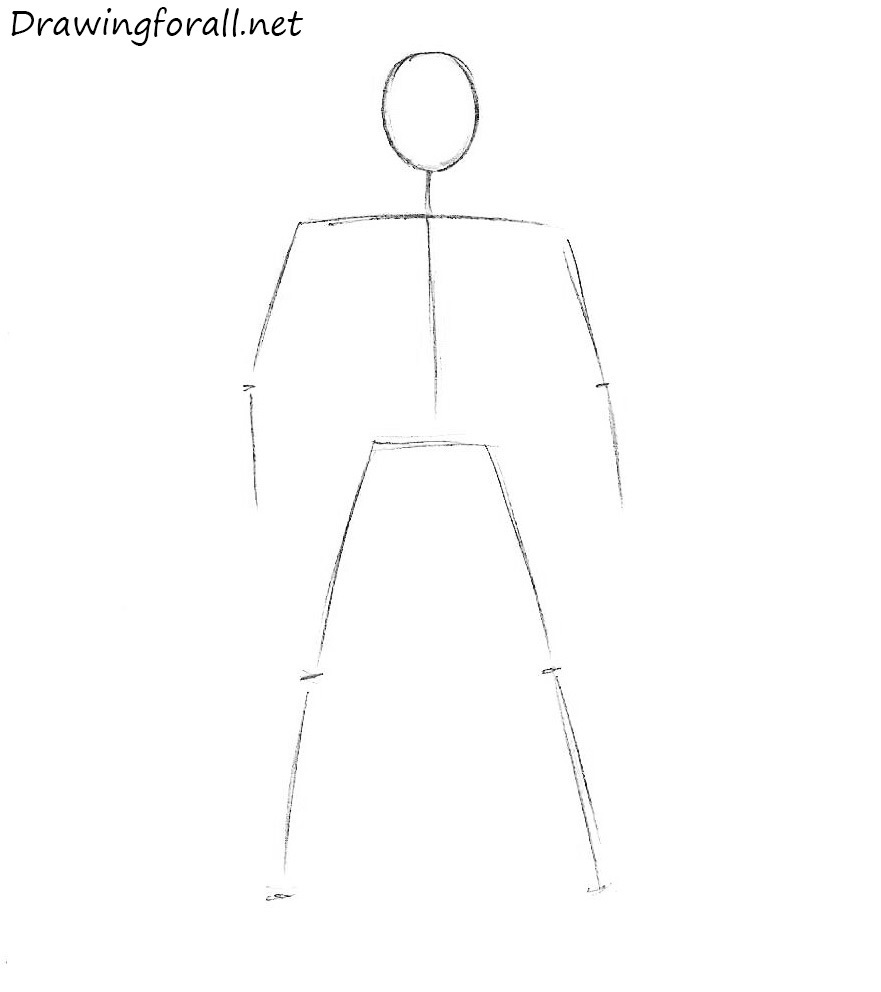 At this step we add some flesh. First draw the cross lines on the face. Note that the lines should intersect exactly in the middle of the face. Then using a cylinders and circles sketch out the neck, torso, hands and legs. In this step, as in previous one, you should try to press on a pencil as easily as possible. 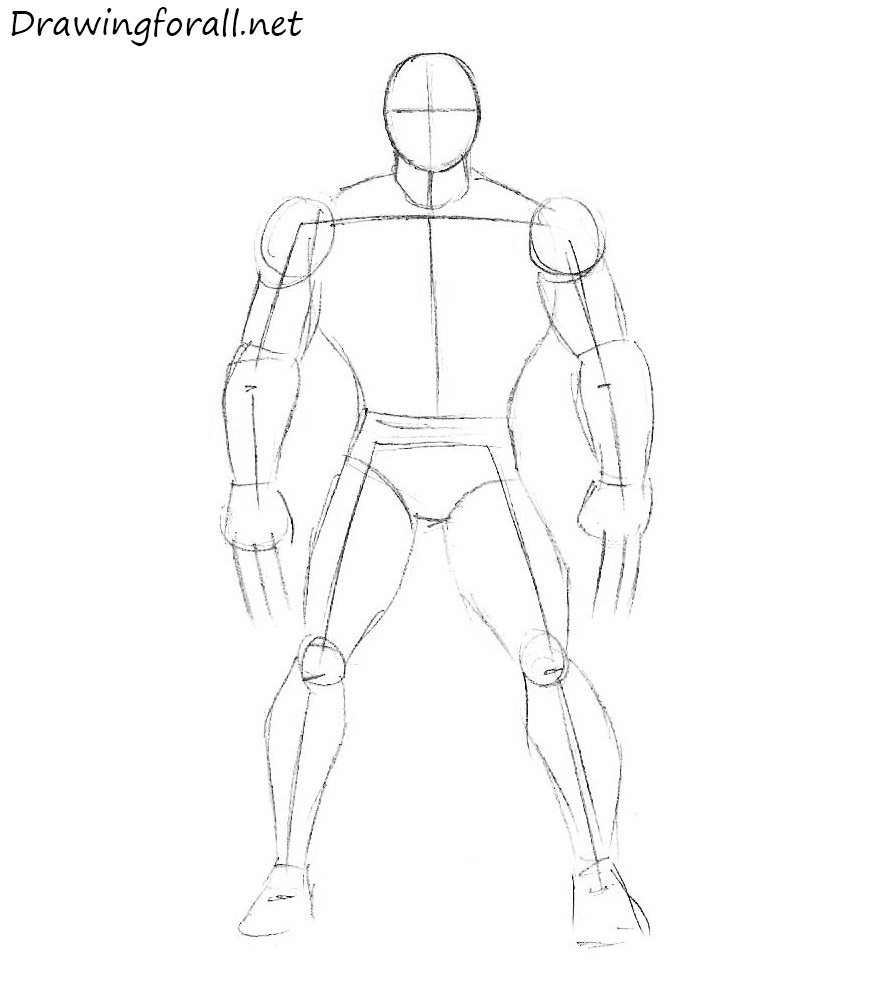 Start to draw the face. Draw ears of the mask. Both sides of the mask should be the same. Outline the eyes using the vertical line from the previous step. 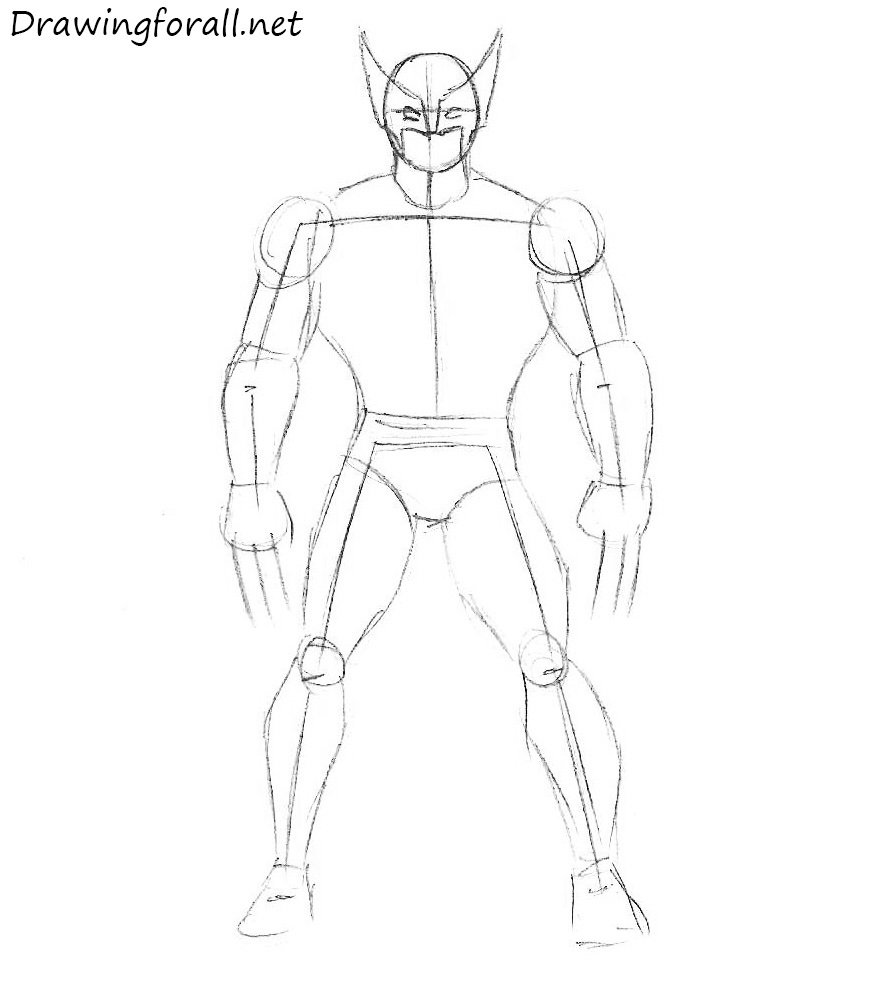 At this step we finish the face. Erase the guidelines. Draw opening of the mask, and using the usual lines draw the mouth. Highlight the lines of the face and erase all the extra strokes. By the way, if you want to draw a more complicated Wolverine’s face, then read our lesson on how to draw Wolverine’s head. 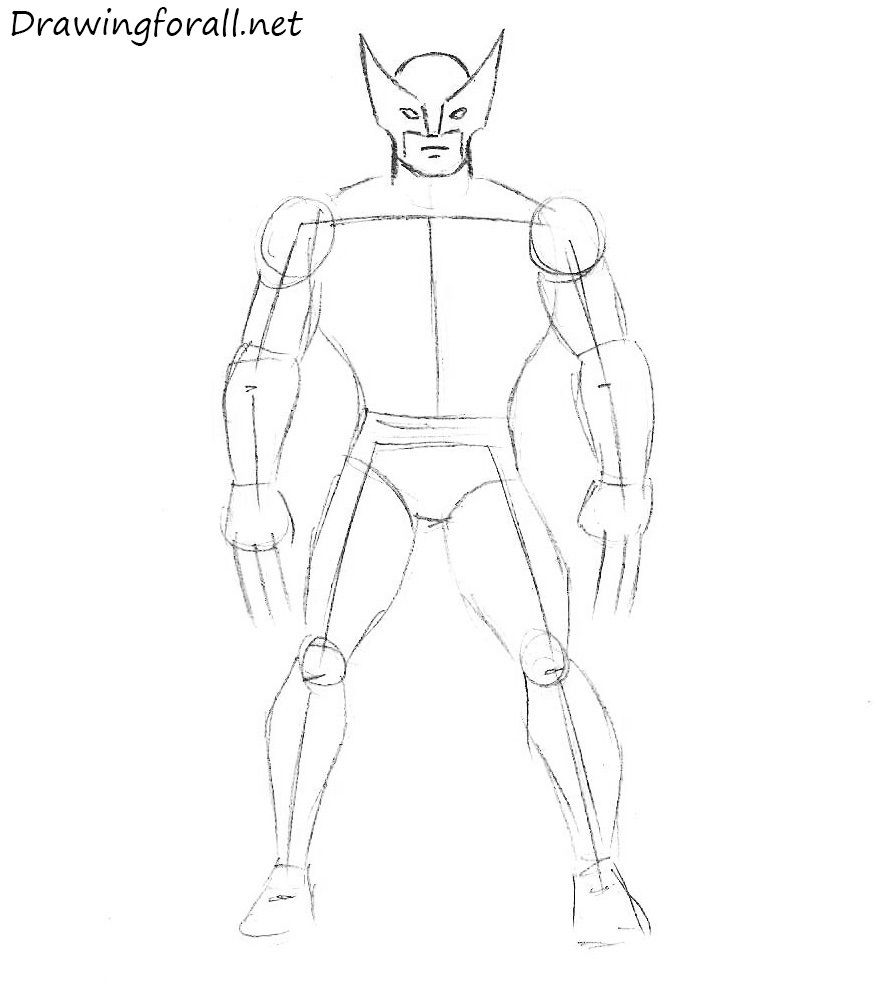 At this step we draw the torso. It is much easier than it seems. First draw the neck. Draw a pair of triangles on shoulders. Draw the pectoral muscles and the press as in our example. Notice how the body tapers from the armpits to the waist. At sides of torso slightly below the armpits draw obliques. Do not forget to draw a costume elements, located on the shoulders and waist of Wolverine, that look like elongated triangles. 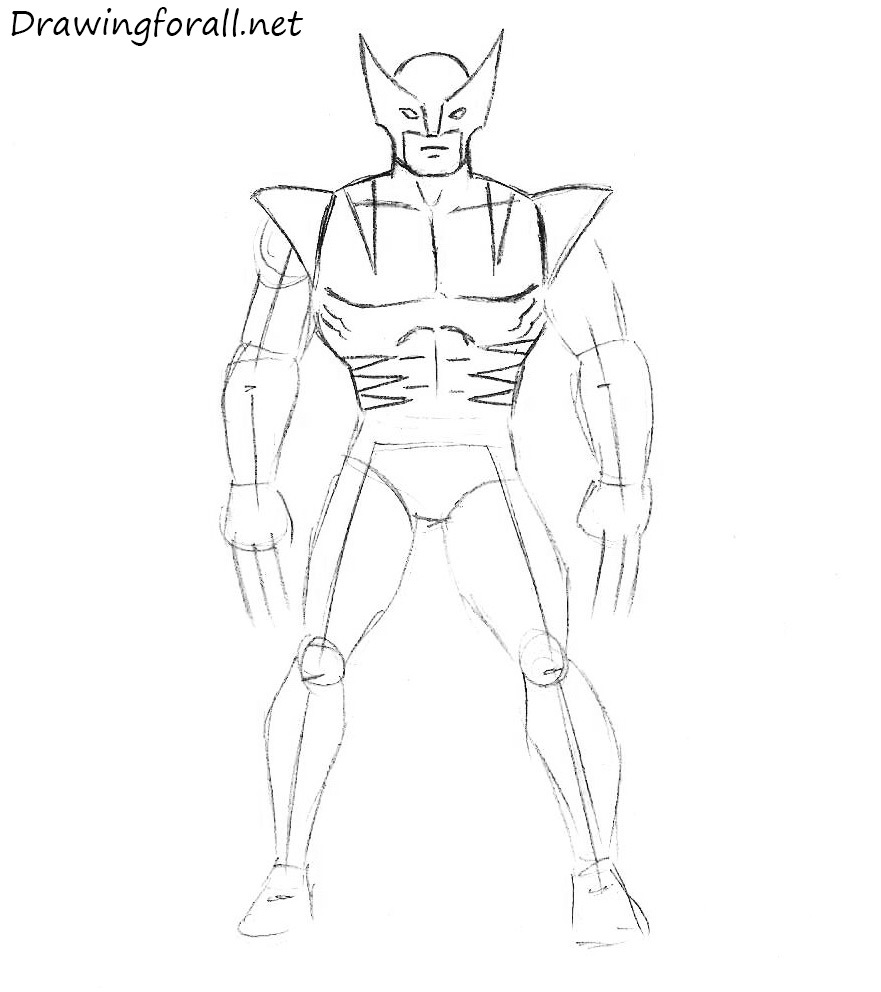 At this step we draw hands. It is also easier than it seems. In order to draw hands properly, remember that they are composed of the deltoids, biceps, triceps and forearm muscles. Draw all these elements as in our example. The claws should be the same length and the same distance from each other. This is the simplified version of Wolverine, but if you want to draw a more detailed picture, read our tutorial on how to draw Wolverine claws. 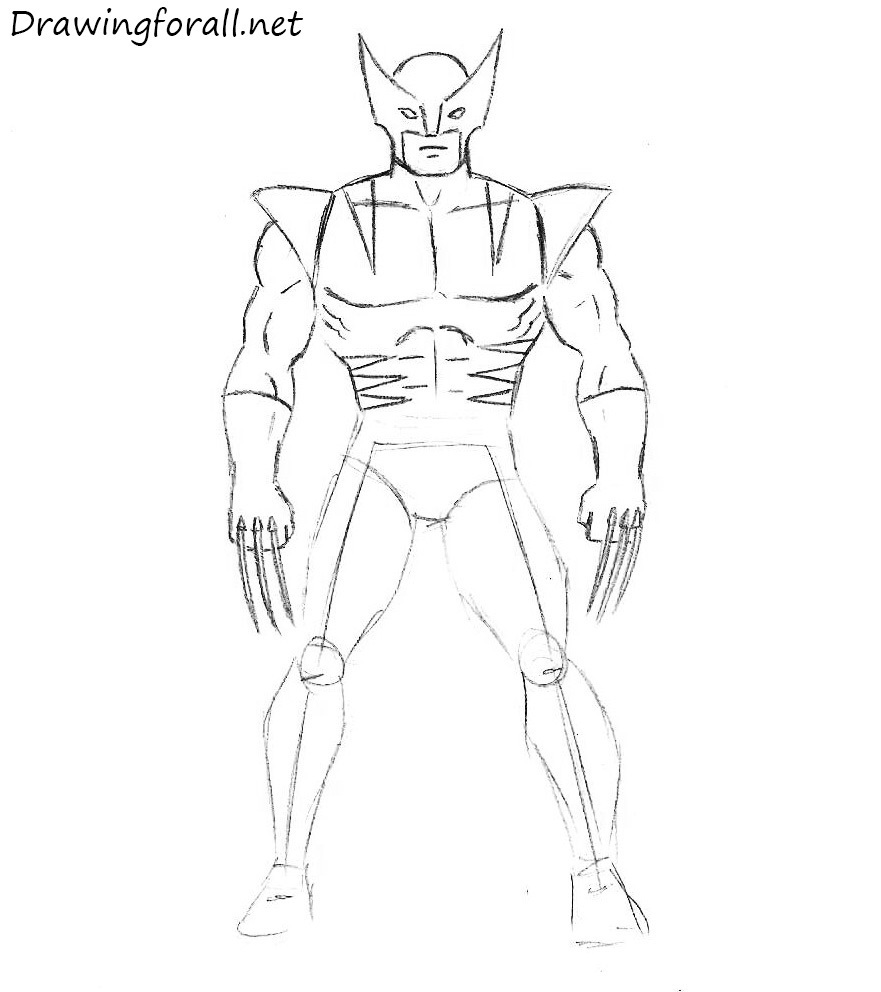 Now we draw the legs. And as in previous steps, it’s much easier than it seems. First, draw the belt and shorts, then draw legs as in our example. To properly draw legs, remember that they are composed of hamstrings, quadriceps and calf muscles.  Notice, that the legs are expanded in the middle of the thigh, then narrows near the knee, then expanded in the area of the calf muscles and narrows closer to the feet. 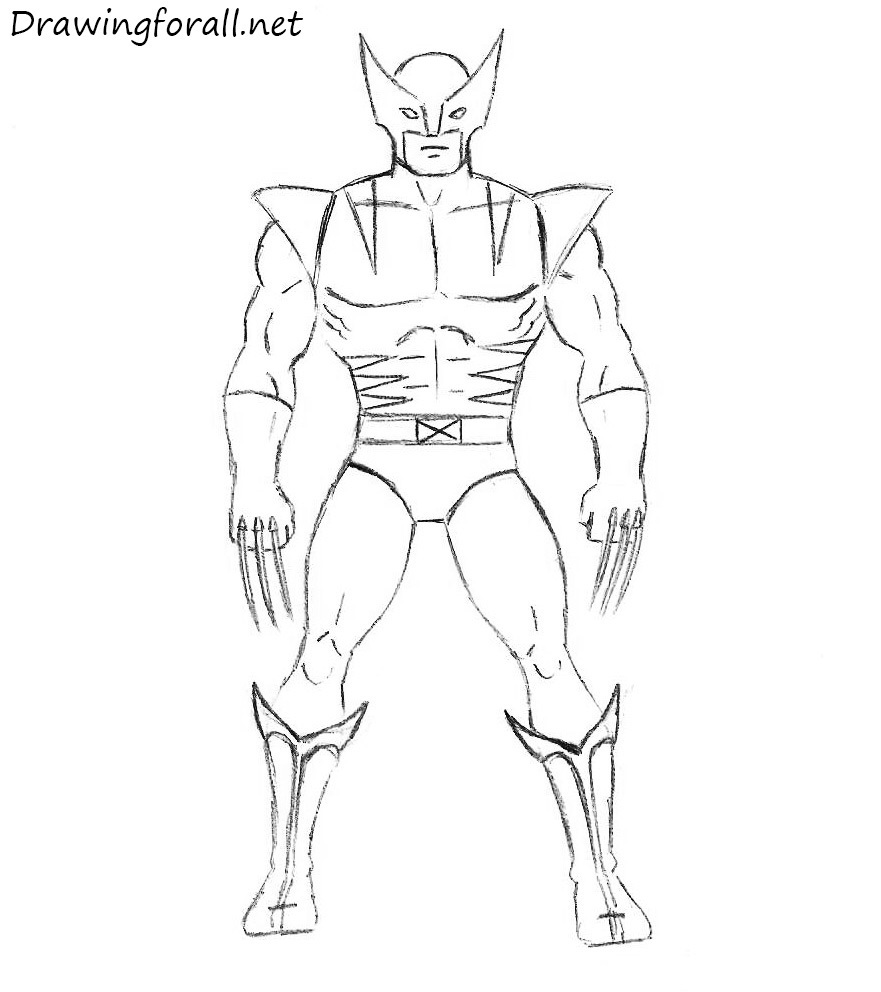 And we got to the last step. In fact, it is the easiest step in the easiest tutorial on how to draw Wolverine. Just paint in black the ears of the mask, strips on torso and shoes. Wolverine ready!

That was the tutorial on how to draw Wolverine easy. We think that it was really easy. If you are easily had drawn Wolverine guided by this lesson, try a more complex lesson on how to draw original Wolverine.Subscribe to our updates in Google +, Twitter, Facebook. Tell your friends about us and share our lessons. Goodbye!