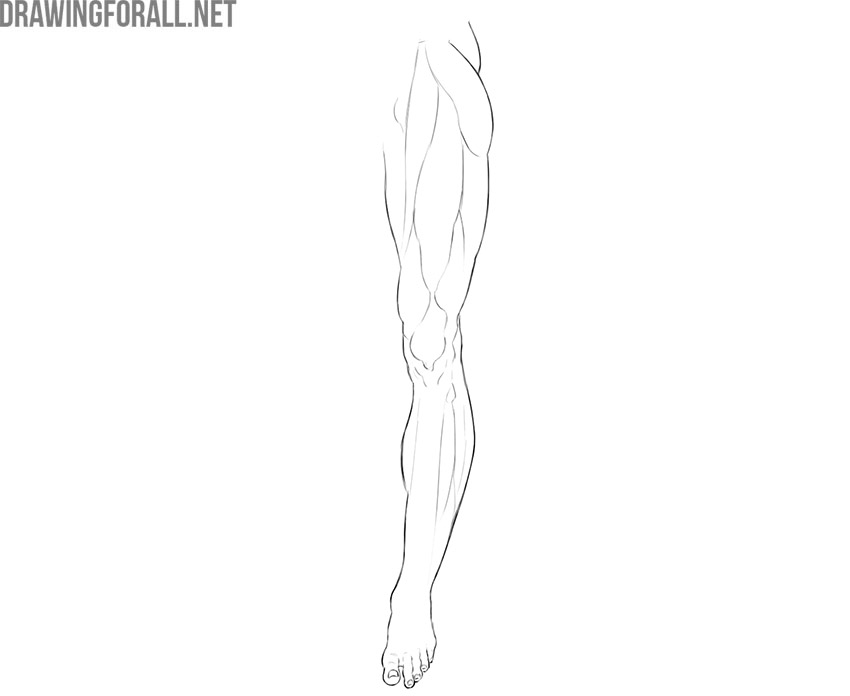 In this guide, we will tell you about the anatomy of the lower limbs. This is a very important topic for artists because the position of the legs shapes the pose and figure of the character.

Muscles of the Girdle of the Lower Limbs

This rounded, raised muscle forms the contour of the back of the pelvis. This muscle is especially developed in powerlifters and gymnasts. The gluteus maximus is the most superficial muscle of all the pelvic muscles and is located just under the skin and adipose tissue.

The gluteus maximus muscle begins from the back sides of all the bones of the pelvic girdle and from the tendon of the spinal erectors. The attachment point of this muscle is the gluteal tuberosity of the femur and the iliotibial tract. 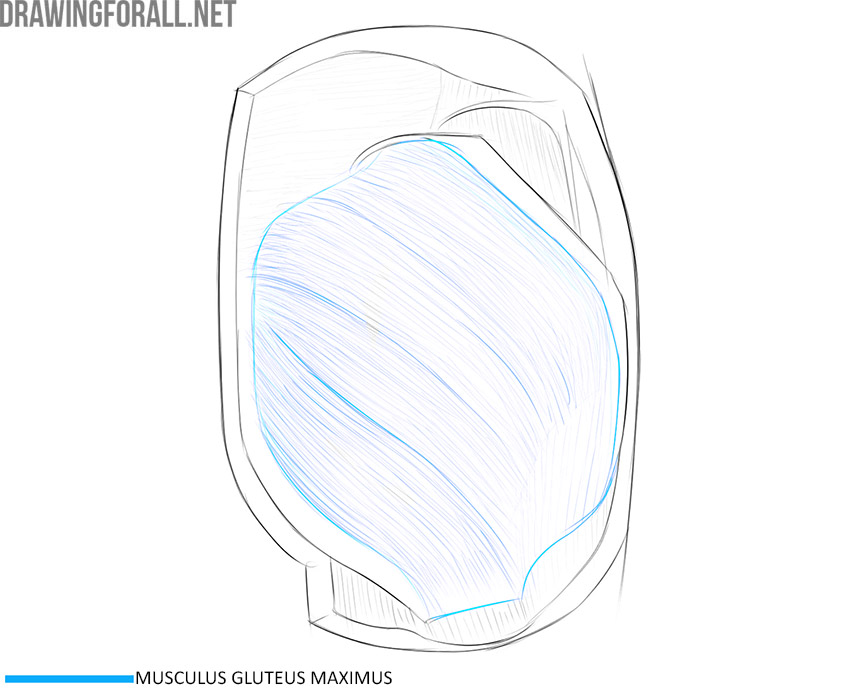 This muscle occupies the most lateral position of all muscles studied today. We can see a small muscle bundle that merges into a powerful tendon structure called fascia lata (iliotibial tract).

The fascia lata tensor begins from a small area on the wing of the ilium just below the superior anterior iliac spine. Going down, it is woven into the iliotibial tract, which reaches the knee joint. 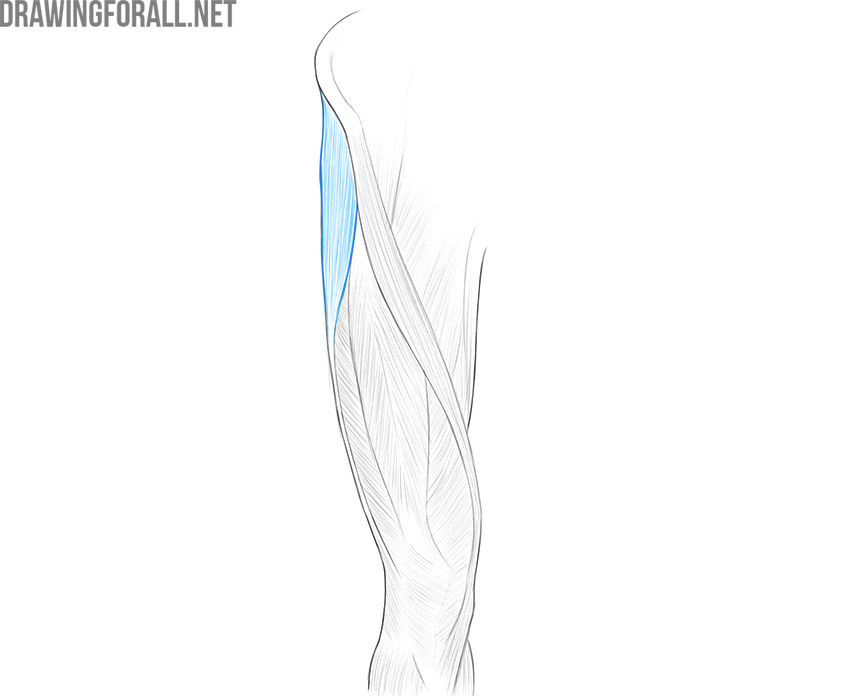 The muscles of the thigh are very strong and massive because these muscles take on a significant part of the load associated with upright posture. The thigh muscles are divided into the muscles of the front, back, and medial groups.

The constituent parts of the quadriceps muscle of the thigh start from different places, but, going downwards, these parts connect into a powerful tendon that spreads over the knee joint and attaches to the tuberosity of the tibia. The patella is located in the tissue of this tendon.

This muscle occupies the entire front of the thigh. Rectus femoris muscle begins with an elongated, thin tendon from the spina iliaca anterior superior (pelvis). Then the tendon passes into a wide, powerful muscle layer, which narrows again near the knee joint and is woven into the common tendon of the quadriceps femoris muscle.

This part of the quadriceps muscle is located lateral to the rectus muscle and occupies almost the entire anterolateral surface of the thigh. The lateral muscle is covered in front by the rectus femoris muscle. Also, this muscle is bordered by the fascia lata (iliotibial tract). The vastus lateralis starts from the trochanter major of the femur and from the intertrochanteric line. Like all other parts of the quadriceps muscle, the vastus lateralis muscle passes into the common tendon and attaches to the tibial tuberosity. 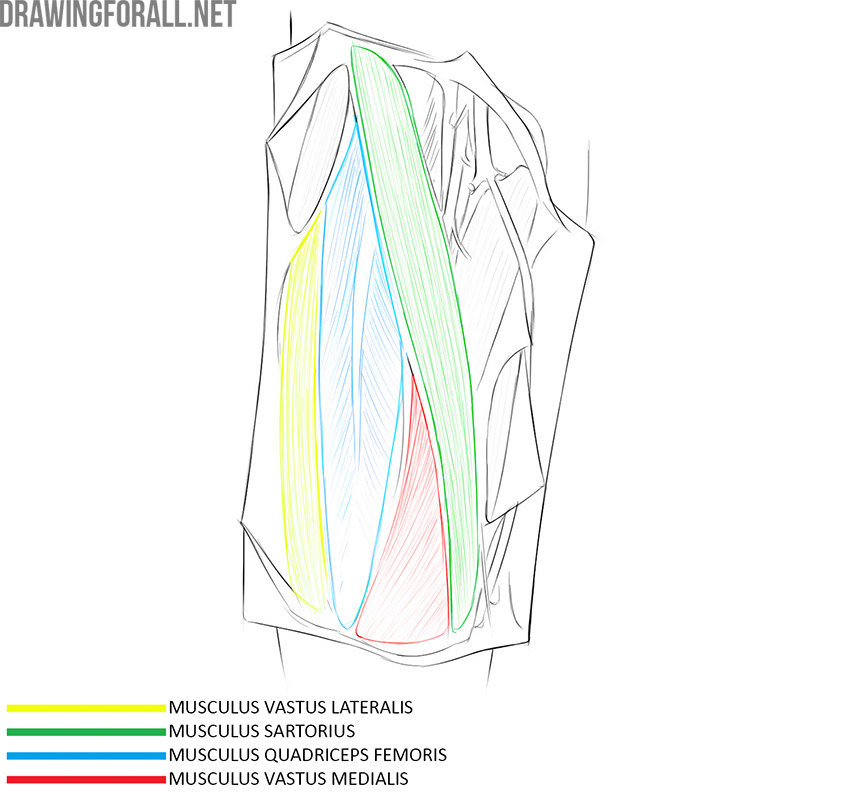 The biceps femoris has a long and short part. The short part is located under the long part, so it is irrelevant in plastic anatomy. The long part covers the most lateral position on the back surface. This part starts from the ischial tuberosity and attaches to the caput of the fibula.

This muscle is a long, elongated strap that runs along the medial edge of the back of the thigh. The semitendinosus muscle is located directly under the skin and partially overlaps the semimembranosus muscle. This muscle starts from the ischial tuberosity and attaches to the tibial tuberosity.

The semitendinosus and biceps muscles form a well-marked arch-like figure. This is especially noticeable if the person stands stretched out to his full height.

The semimembranosus muscle is located directly below the semitendinosus muscle. 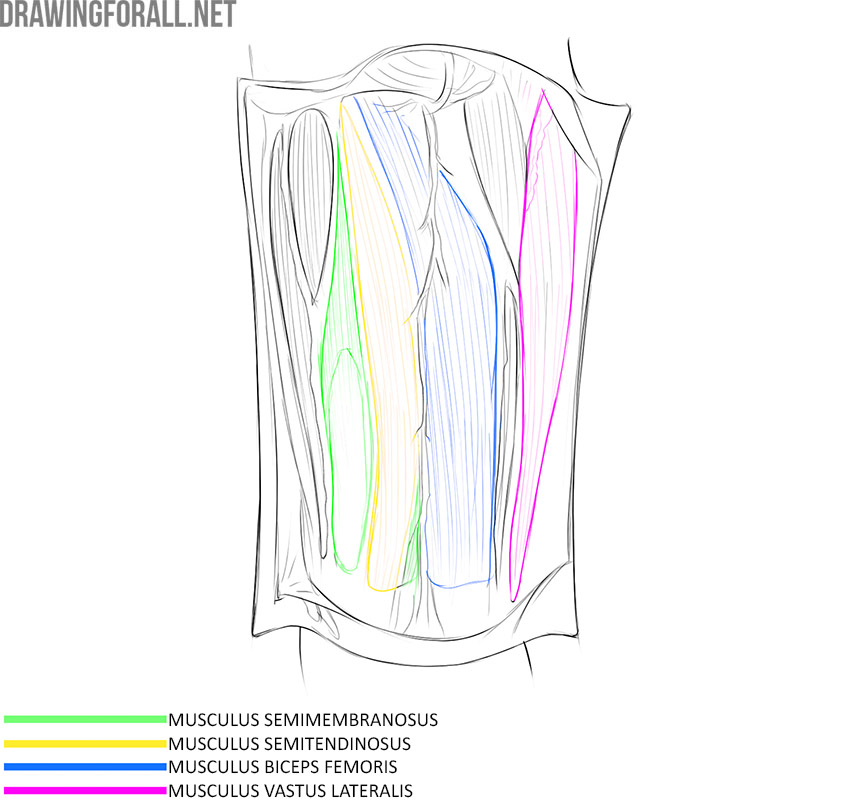 The shin is the part of the leg that is located between the knee joint and the foot. The bone base of the shin is made up of the fibula and tibia. The shin muscles control the movements of the foot and toes, so this is a fairly large group.

We will not study all the shin muscles, because among them there are very deep muscles that are not important for plastic anatomy. We will only study the superficial muscles that form the contours of the shin.

These muscles are located on the front surface of the shin and extend the foot and toes.

It is a very large and powerful muscle. The anterior tibial muscle forms the anterior rounded contour of the lower leg. This muscle fills the space lateral to the anterior edge of the tibia.

The anterior tibial muscle starts from the lateral condyle and from the upper half of the lateral surface of the tibia. Downward, this muscle passes into a long thin tendon, which attaches to the plantar surface of the medial sphenoid bone and the base of the 1st metatarsal bone.

The tendons of the extensor digitorum longus are clearly contoured under the skin when the muscle contracts.

Extensor digitorum longus muscle begins from the lateral condyle of the tibia and the anterior surface of the body of the fibula.

We cannot see the main part of this muscle due to the fact that it is almost completely overlapped by the anterior tibial muscle. However, the extensor hallucis longus is very noticeable under the skin, especially during times of muscle tension.

The extensor hallucis longus starts from the medial surface of the lower 2/3 of the fibula and attaches to the distal phalanx of the big toe. 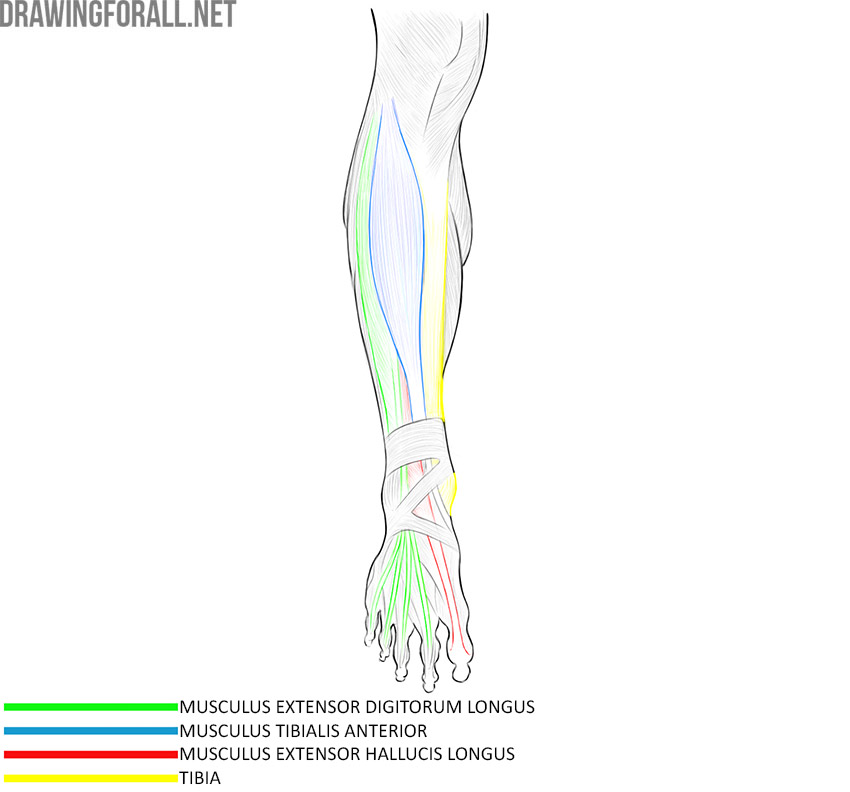 Back Muscle Group of the Shin

This group includes the most powerful and most visible shin muscles. Back muscles of the shin are located in several layers, and we will get acquainted with the largest and most superficial of them.

This is the only muscle of the superficial layer. However, it is a very large and wide muscle with several parts. In addition, it forms the entire posterior and partially anterior contours of the lower leg. The triceps muscle consists of three parts, and each part has its own name. We will consider only two parts that are more superficial.

The main function of the gastrocnemius muscle is to flex the foot. The work of this muscle is most noticeable when you look at professional ballet dancers in those moments when they are standing on their toes.

Under the lateral and medial parts of the triceps muscle of the lower leg is a flat, broad muscle called the soleus muscle. The soleus muscle is not visible unless the medial and lateral heads are removed, so we will not dwell on this muscle in detail. 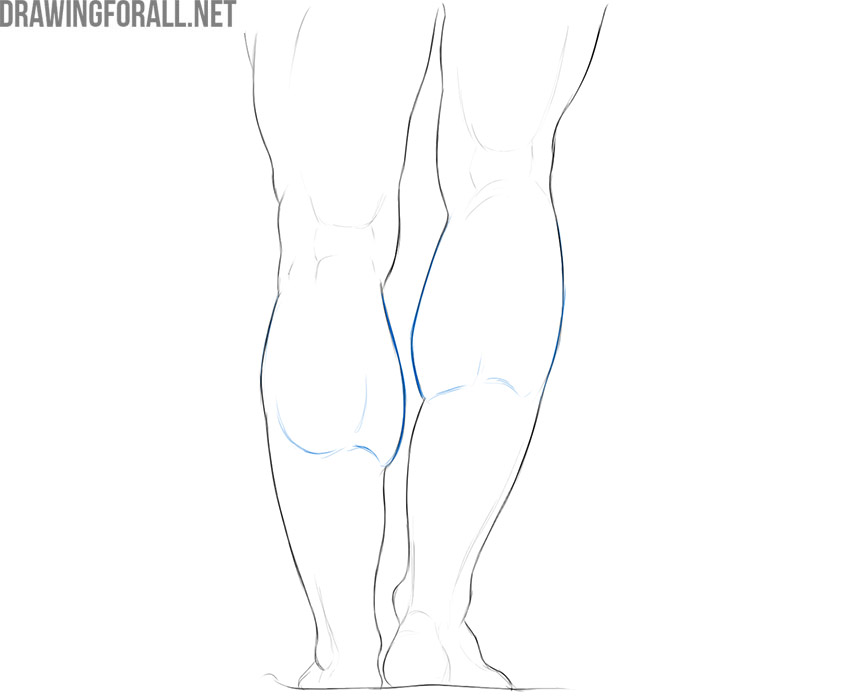 Achilles tendon is a tendon into which all three heads of the triceps muscle of the lower leg pass. It attaches to the heel and is therefore also called the heel tendon. The history of the name of this tendon is connected with the history of the Trojan War, more precisely, with the myth about one of its alleged participants. We are talking about Achilles – one of the main warriors of the Greeks who (according to the legends of Homer) besieged Troy.

Achilles’ mother, the goddess Thetis, bathed her little son in the waters of the Styx River. This gave the future hero complete invulnerability. However, while bathing, Thetis held Achilles by the heel. It was in this heel, in the midst of one of the last battles before the fall of Troy, Achilles was mortally wounded by the Trojan prince Paris.

In honor of this ancient myth, the heel tendon is called the Achilles tendon. 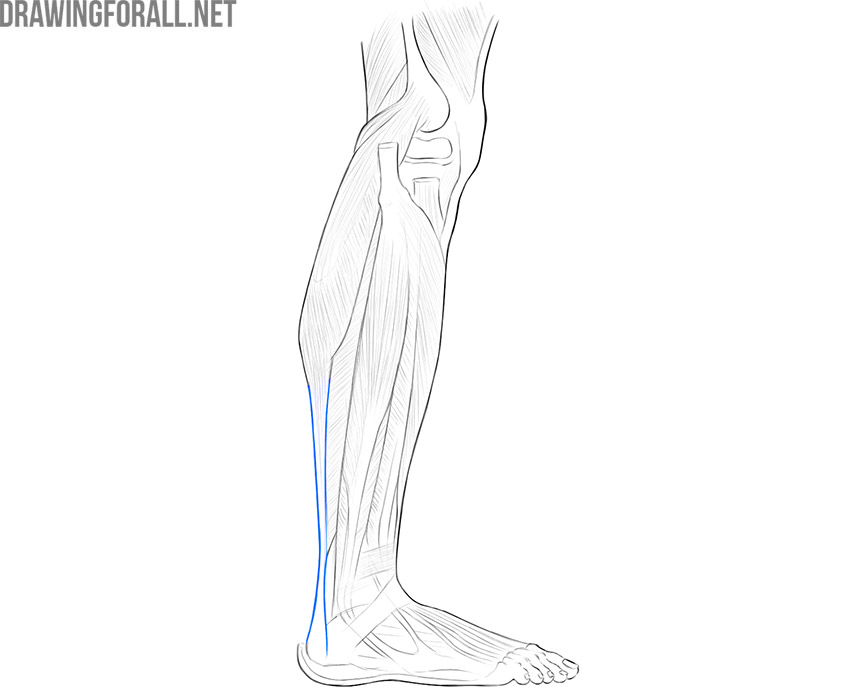 Muscles of the Foot

Muscles of the Rear of the Foot

The muscles on the rear of the foot are responsible for the extension of the toes. These muscles are located under the tendons of the anterior leg muscles and, in fact, duplicate their function.

It is a fairly large, broad muscle that divides into four sections. Each of the parts is directed to the corresponding finger, becomes a long, thin tendon, and attaches to the proximal phalanx of the finger. This muscle starts from the anterior surface of the heel bone.

There are usually separate muscles for the thumb. In this case, we also see a special muscle that controls the extension of the big toe. The extensor hallucis brevis starts from the superior surface of the calcaneus and attaches to the proximal phalanx of the big toe. 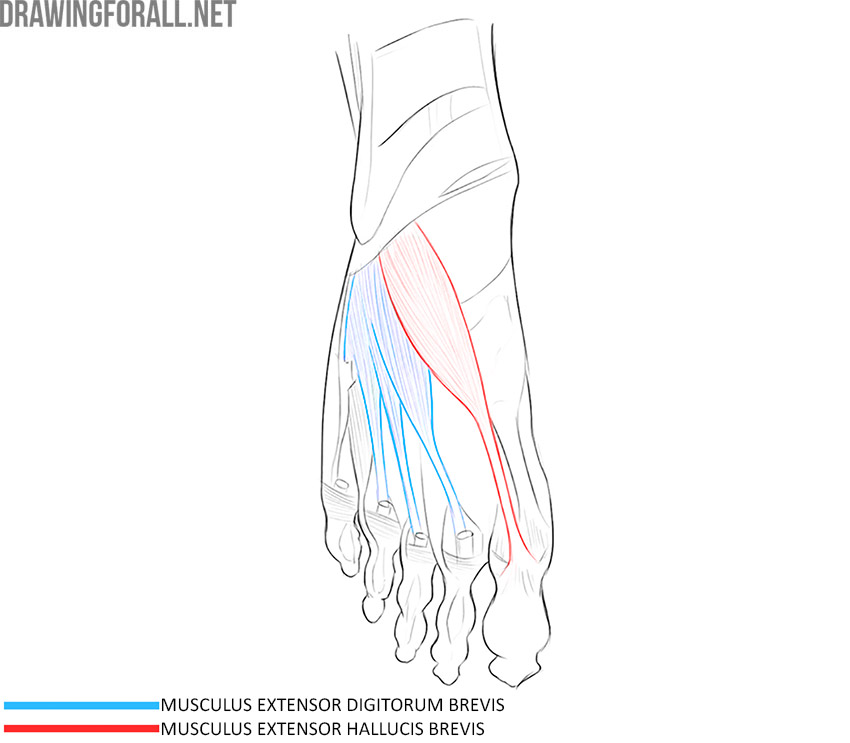 Almost all muscles of this group are located under the plantar aponeurosis. It is a very strong layer of connective tissue that sits under the skin and is divided into bundles corresponding to the fingers.

When extending the fingers or standing on toes, the plantar aponeurosis clearly appears under the skin. 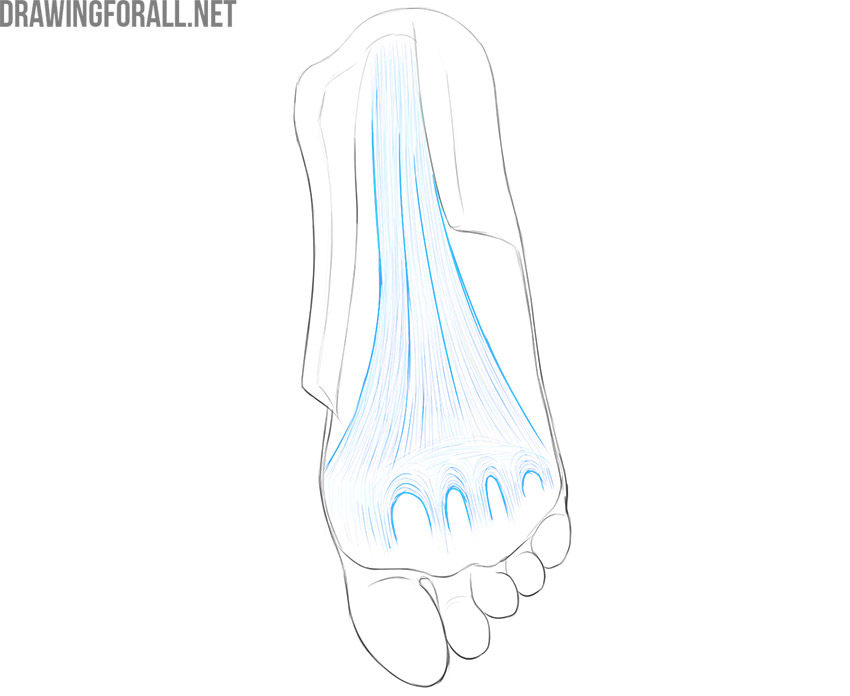 The gluteal region corresponds to the gluteus maximus muscle.

The thigh area has front and back surfaces. The front surface is bounded from above by the inguinal ligament, from below by a horizontal line drawn 3-5 centimeters above the patella. 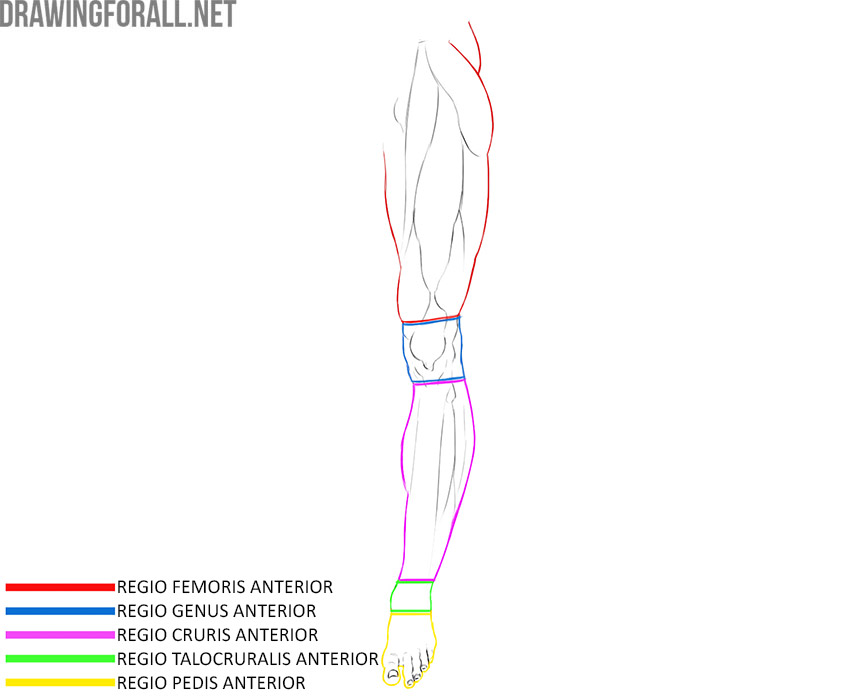 The knee region also has front and back surfaces.

This area corresponds to the location of the ankle joint.

The region of the foot is bounded at the top by a line connecting the lower edges of both ankles. 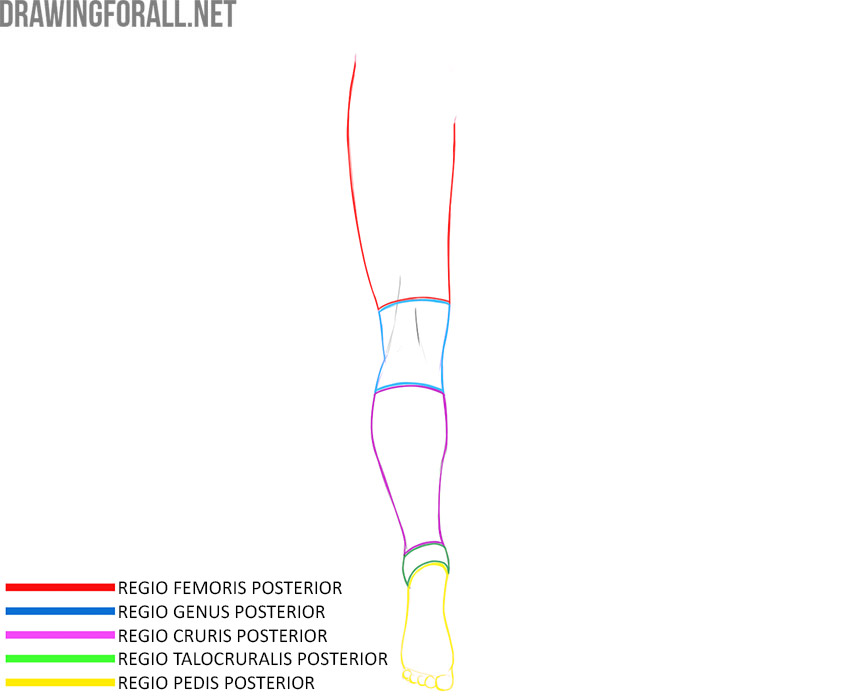