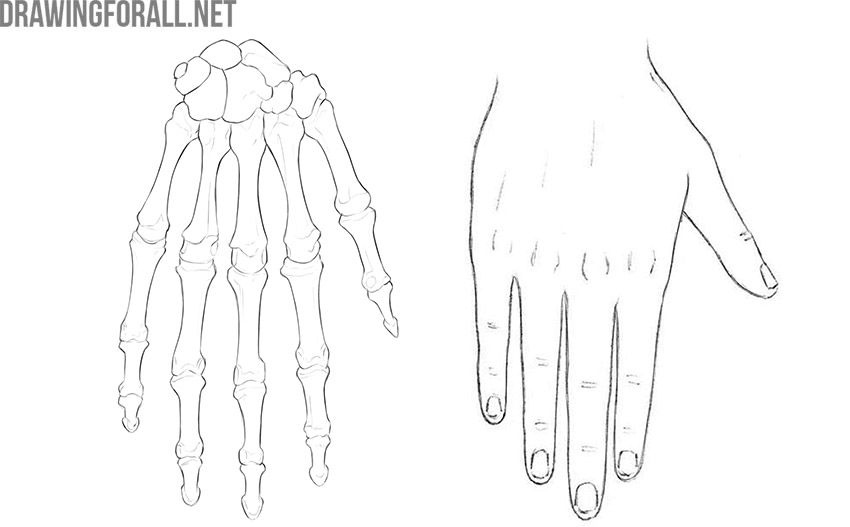 We can do pretty cool things with our hands. Surgeons can perform masterly operations on the brain, guys at Formula 1 pit stops change wheels in 2-3 seconds, and we can create new drawing tutorials for you, dear readers.

All these things we can do because of developed arms. This is indeed a very cool evolutionary device that we will be looking at in detail today. More precisely, we will consider the skeleton of the entire upper limbs. As a rule, the upper limb, especially the hand, is a very difficult thing for artists.

The upper limb belt is formed by only two bones – the clavicle and the scapula. It’s much easier than the pelvic bones, is not it?

The upper limb girdle is attached to the rib cage with numerous muscles and ligaments, as well as the sternoclavicular joint. This is what this joint looks like: 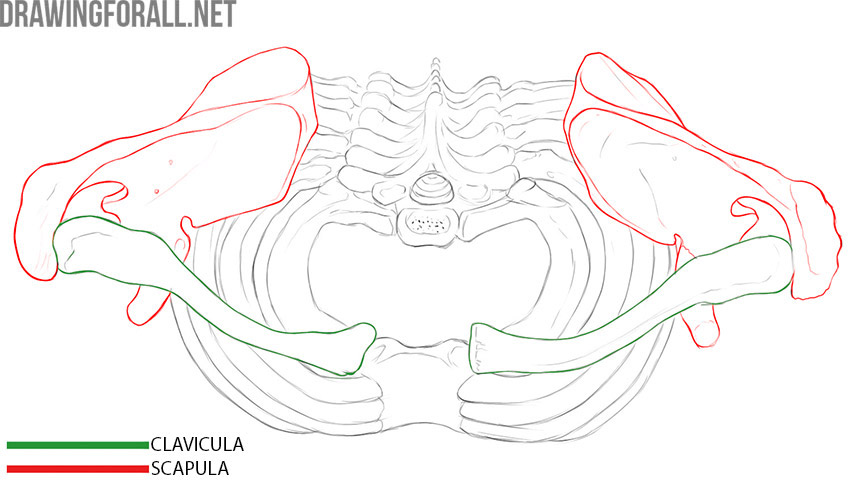 Let’s look at each bone individually.

The scapula is a large, flat bone that adjoins the back of the rib cage. The scapula is triangular in shape. Accordingly, we can see three corners on the shoulder blade, three edges, and several more rather important processes. 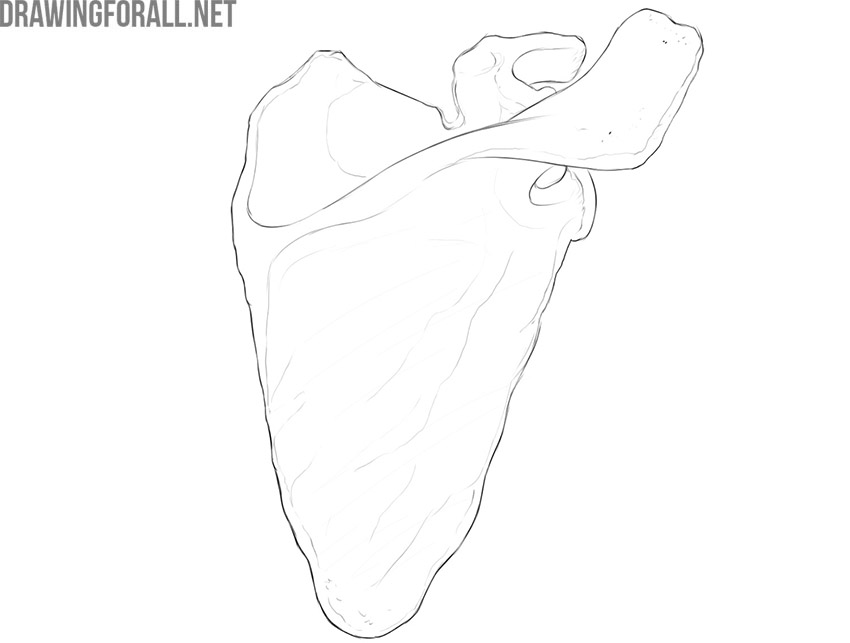 The edges of the scapula are the medial edge, the lateral edge, and the superior edge. The angles have slightly different names – upper corner, lower corner, and lateral angle.

On the costal surface, we see a large fossa that takes up almost all the space. This is the subscapular fossa (fossa subscapularis), which is filled with fibers of the strong subscapularis muscle. We can also see the upper (angulus superior), lower (angulus inferior) and, lateral (angulus lateralis) angles of the scapula. 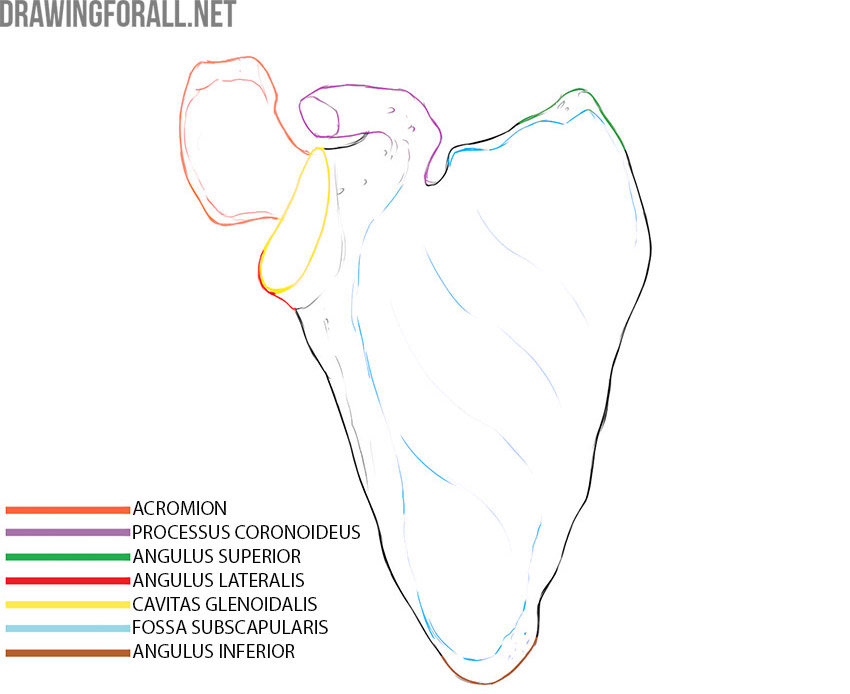 If we turn the scapula over and look at the dorsal surface, we see a large horizontal protuberance that is slightly oblique. This is the spine of the scapula (spina scapula). The space of the dorsal surface, which is located above the spine of the scapula, is called the supraspinatus fossa (fossa supraspinata), and the space under the spine is called the infraspinatus fossa (fossa infraspinata). Both pits are also filled with muscles of the same name, which are noticeably contoured in athletic people. 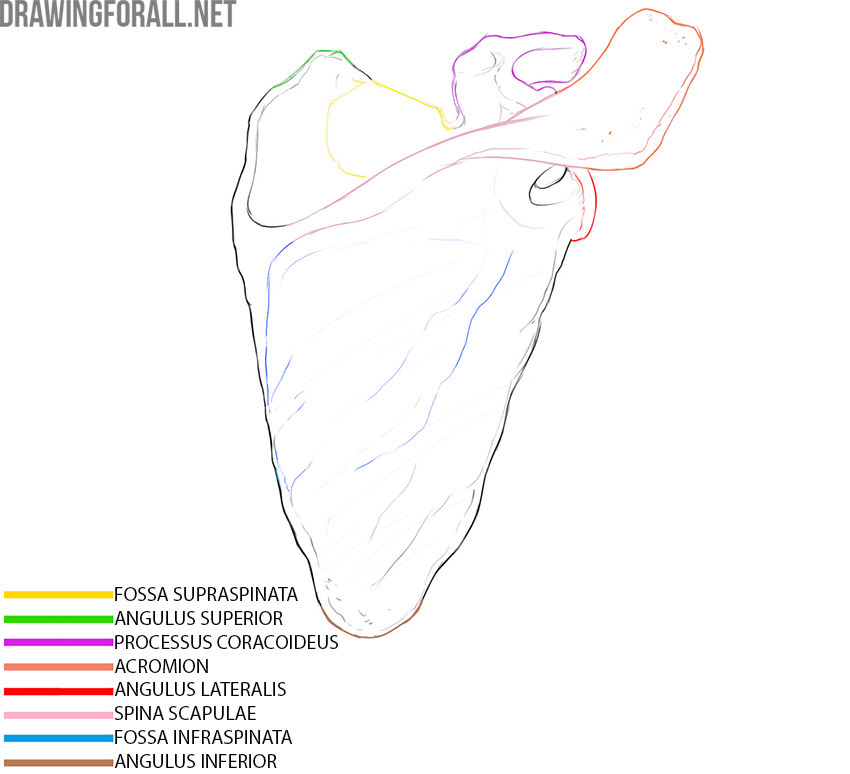 The сlavicle is a bone that is fairly visible in thin people. Moreover, in a person with this type of physique, the supraclavicular fossa is also clearly visible. 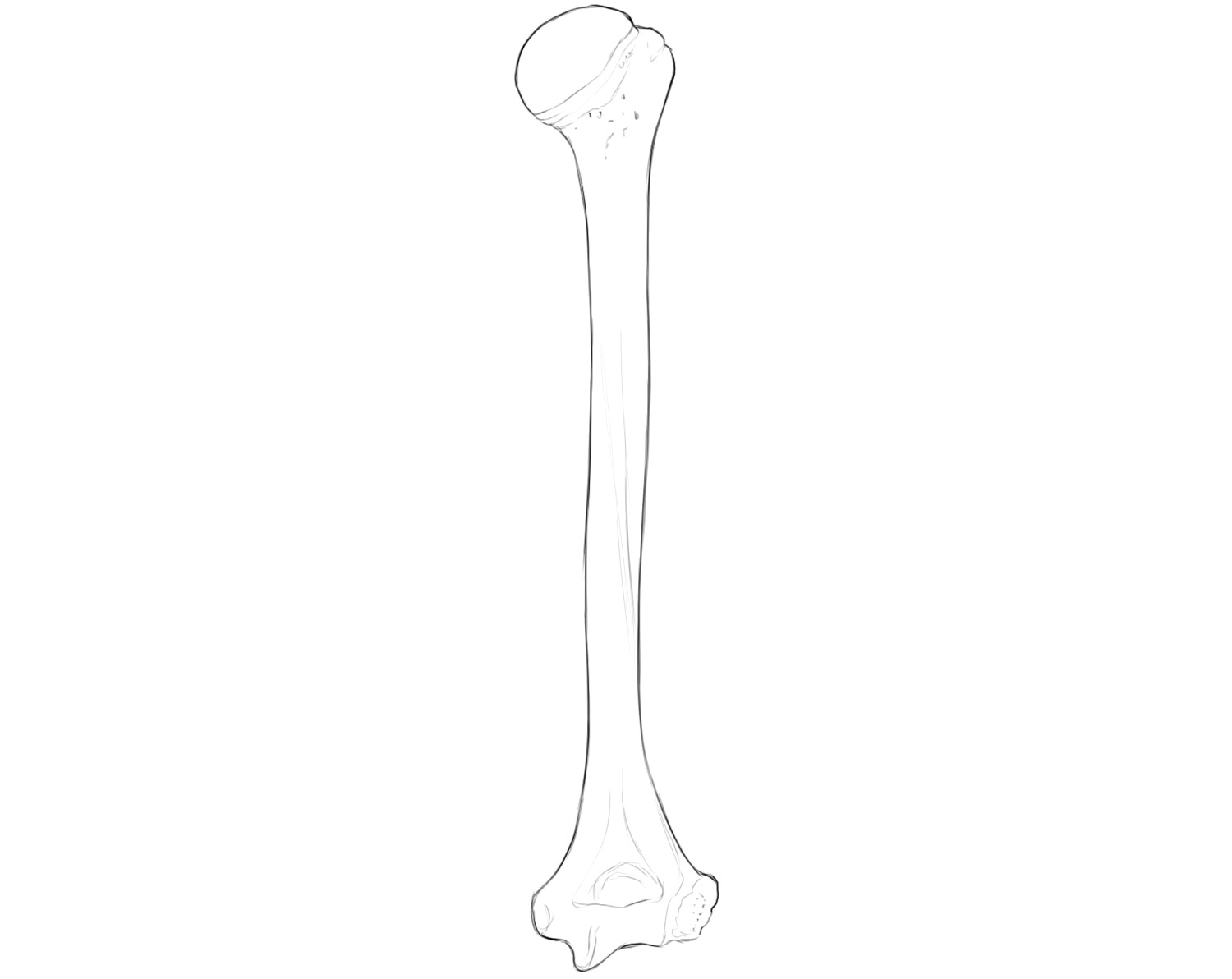 On the upper epiphysis is the head of the humerus (caput humeri) – a rounded part that articulates with the scapula. The head, as always in anatomy, goes into a narrower part – the anatomical neck. If we move even more towards the body, we will see an even more pronounced narrowing – this is the surgical neck. This part has such an unusual name because during falls, it is the surgical neck that most often breaks. 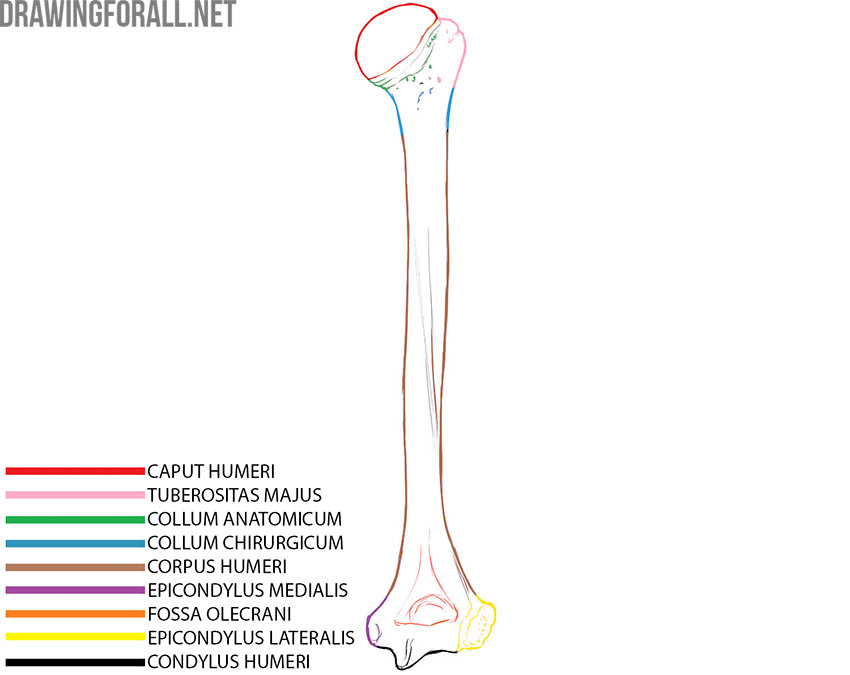 A large tubercle and a small tubercle are located behind the head. Combs of the same name extends downward from each tubercle.

In the mid-body area, you can see the deltoid tuberosity – a clearly visible area with a rough texture, to which the powerful and strong deltoid muscle is attached. 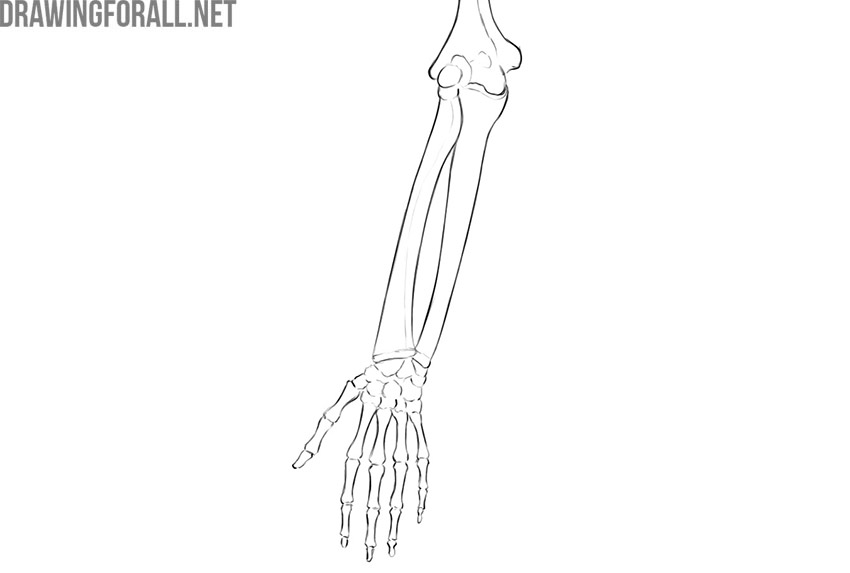 So, the radius is a long, tubular bone that lies between the humerus and the hand on the side of the thumb. The radius has a head (caput radi) that goes into the neck (collum radi). A little below the neck is located the tuberosity of the radius. 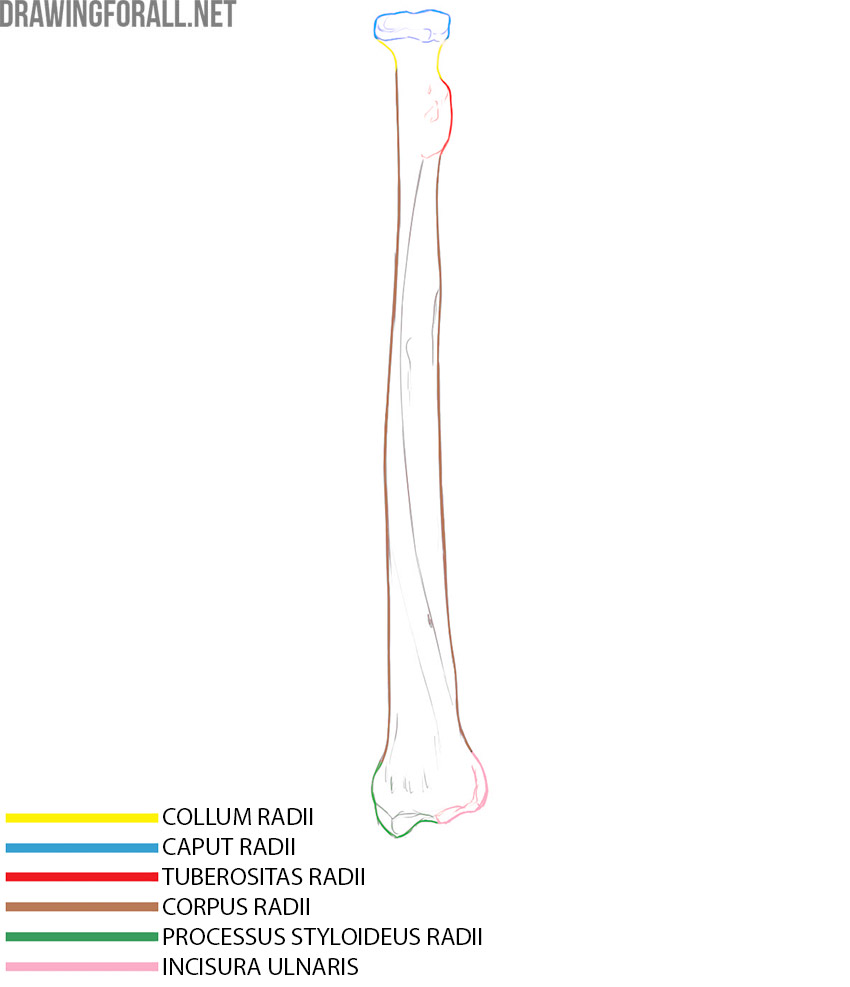 Even lower is the body of the radius, which ends with an extended lower end of the bone. On the lateral side, we see the styloid process (processus styloideus radi) of the radius for articulation, and on the opposite side, the ulnar notch (incisura ulnaris) for articulation with the ulna. On our diagram, we marked the place on the back of which the incisura ulnaris is located.

The ulna has an excellent landmark by which you will remember this bone exactly and will not confuse it with the radius, even if you have forgotten the rule of the little finger and thumb. We’re talking about a very large olecranon at the top end.

Also at the top end, you can see the coronal process, which has smaller dimensions. Just below these processes, on the body of the bone, is the tuberosity of the ulna. 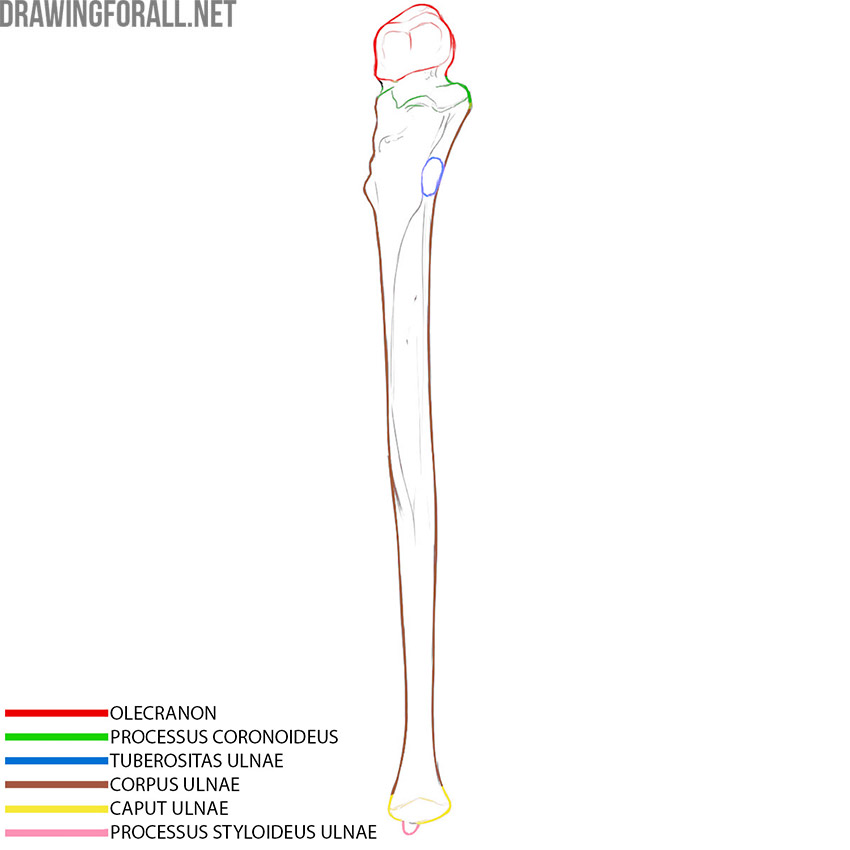 The body of the ulna looks like a triangular prism because of the interosseous edge protruding to the medial side.

The bones of the hand are the few bones that form the most mobile part of our body. It is with the help of the joints of the bones of the hand that we can make gentle and precise movements that are unattainable for all other living beings on our planet. 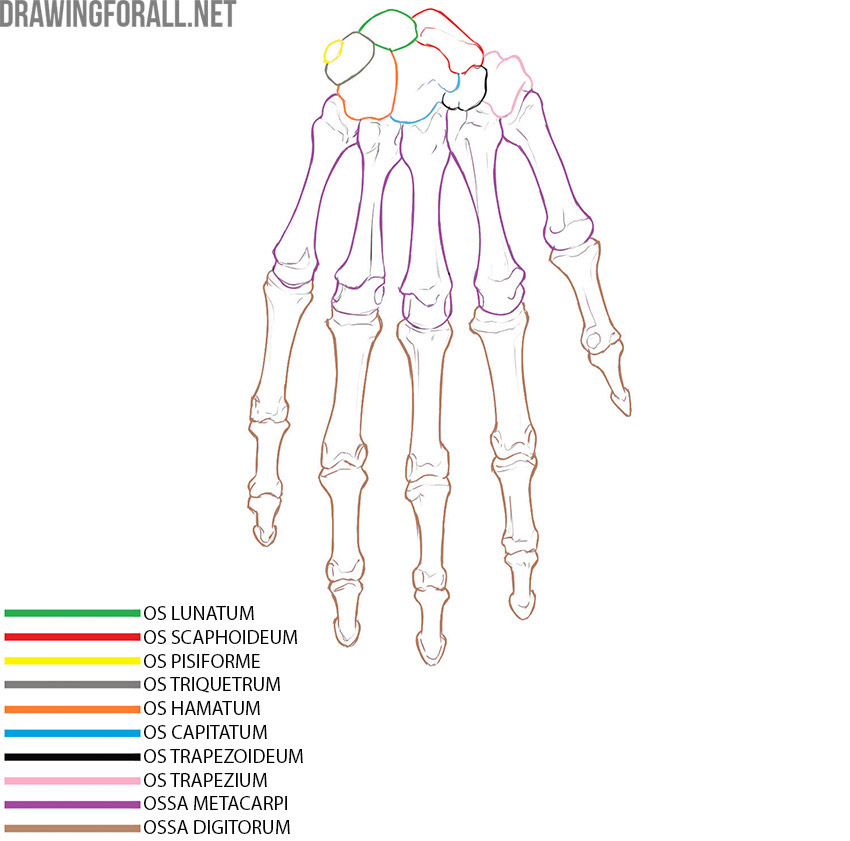