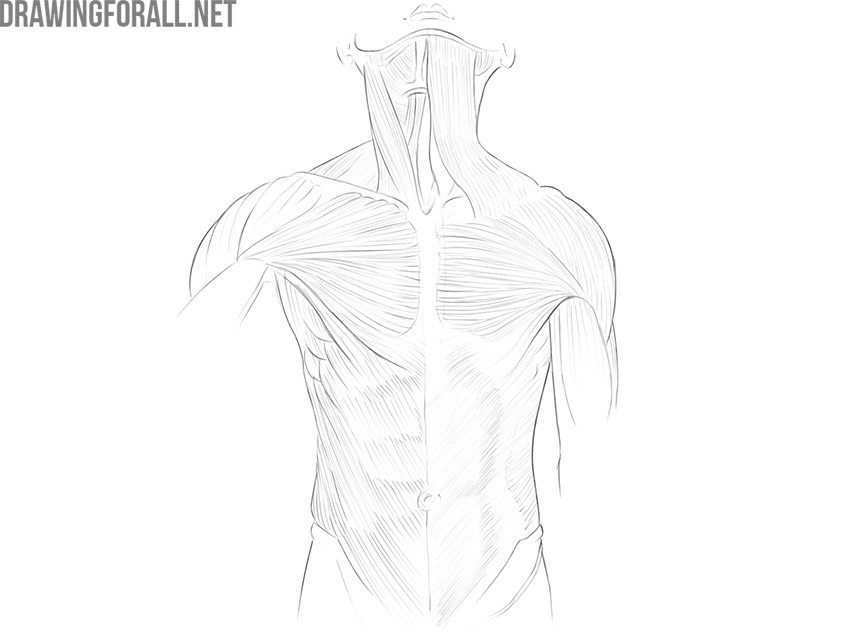 We analyze precisely the plastic anatomy, that is, the structure of precisely those anatomical structures that form the contour of the body. Therefore, today we will show you the superficial muscles of the back, chest, and abdomen.

The pectoralis major muscle starts from the clavicle, from the anterior surface of the sternum and cartilage of 2-7 ribs, as well as from the front wall of the rectus sheath. Below we will definitely analyze what the rectus abdominis sheath is.

The pectoralis major muscle attaches to the greater tubercle of the humerus. Remember, all the superficial muscles of the chest drive the bones of the upper limb. 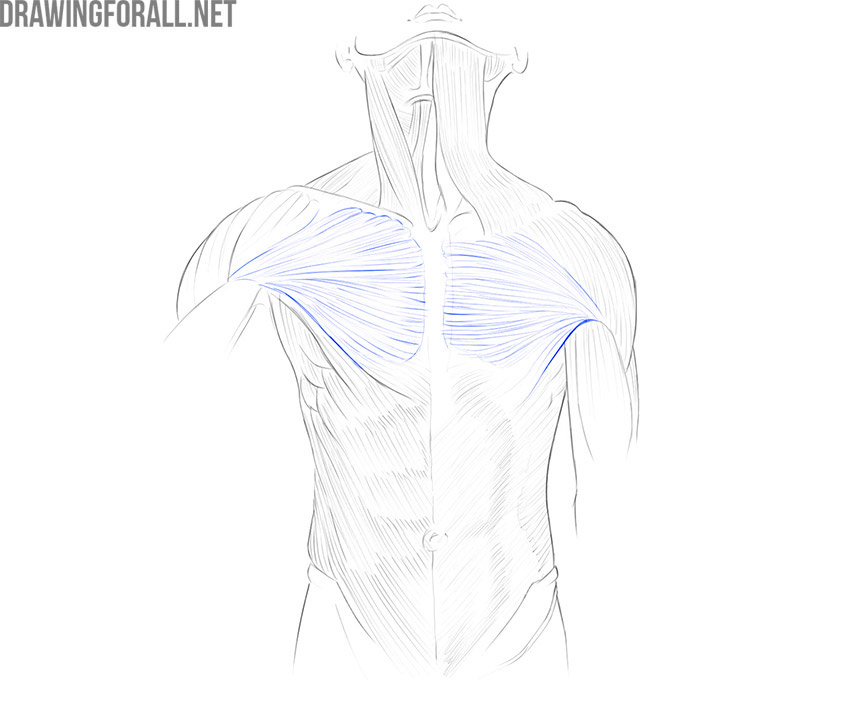 The long parts of this muscle cover the ribs. It is a fairly powerful muscle that sits superficially, so you can see the serratus anterior muscle in athletic people with a small amount of subcutaneous fat. The most important feature that distinguishes the serratus anterior muscle from many other muscles associated with the ribs is the location of the muscle parts just above the ribs, and not between them.

Serratus anterior muscle begins on the outer surface of 1-9 ribs and is attached to the medial edge and lower corner of the scapula. 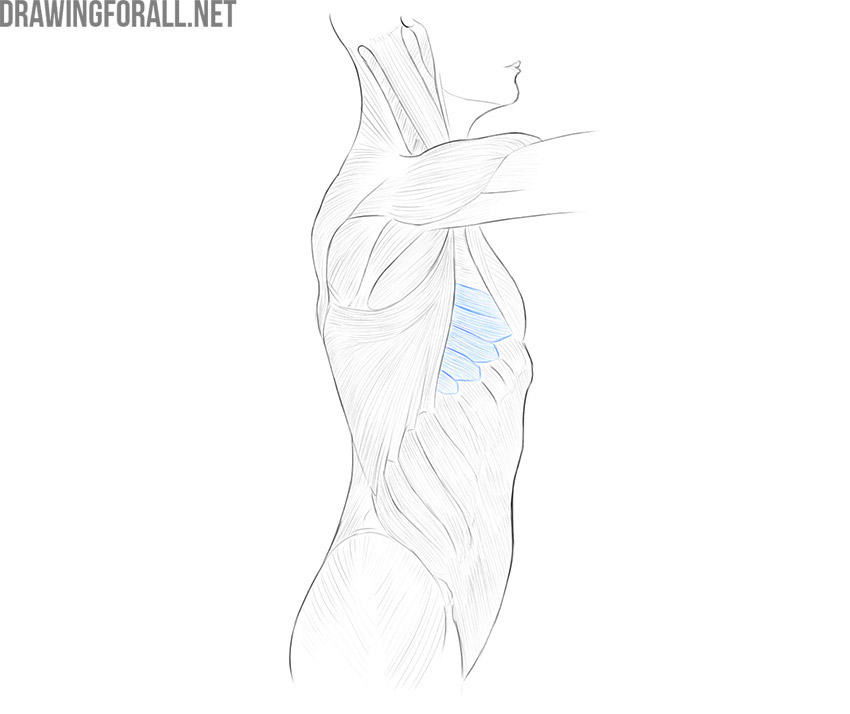 This group also includes the pectoralis minor muscle and the subclavian muscle, which we can only see if the pectoralis major muscle is removed, so these muscles are not particularly important for plastic anatomy.

Muscles of the Back

This is a paired muscle, and if we consider only the left or only the right trapezius muscle, we will see a triangular muscle fiber. If we look at the contours of both muscles together, then we really see a figure that looks like a trapezoid.

The trapezius muscle is located under the skin. It is noticeable when you strain your back, raise your shoulders, and tilt your head back slightly. In this position, this muscle contours even in people with a normal physique.

This is another powerful and large superficial paired back muscle. The latissimus muscles cover the entire back of the torso like a corset. In athletic people, this muscle is clearly visible even from the front.

These areas are sometimes referred to as wings. The developed latissimus dorsi muscle in combination with the deltoid muscles and pectoralis major muscles forms a masculine type of figure with a very wide upper body and a narrow pelvis. 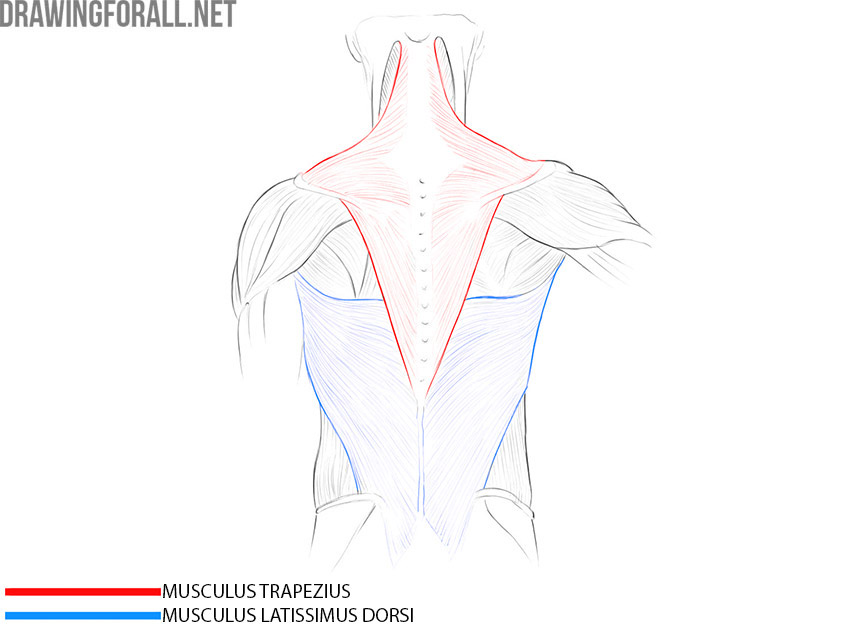 This muscle occupies a deep position, that is, it is covered by the skin, fascia, and other muscles. However, the muscle that straightens the spine is very powerful and large, so we can see it in a living person.

Massive bundles of this muscle start from the lumbar-thoracic fascia, the angles of the ribs, and spinous processes of the lumbar and thoracic vertebrae, as well as from the posterior surface of the sacrum. They are attached to the mastoid process of the skull, to the occipital bone and to the transverse processes of the overlying vertebrae

The muscle that straightens the spine holds the vertebral column in an upright position and unbends it, pulls the head back, and tilts it diagonally. Also, this muscle is involved in breathing, setting the chest in motion. 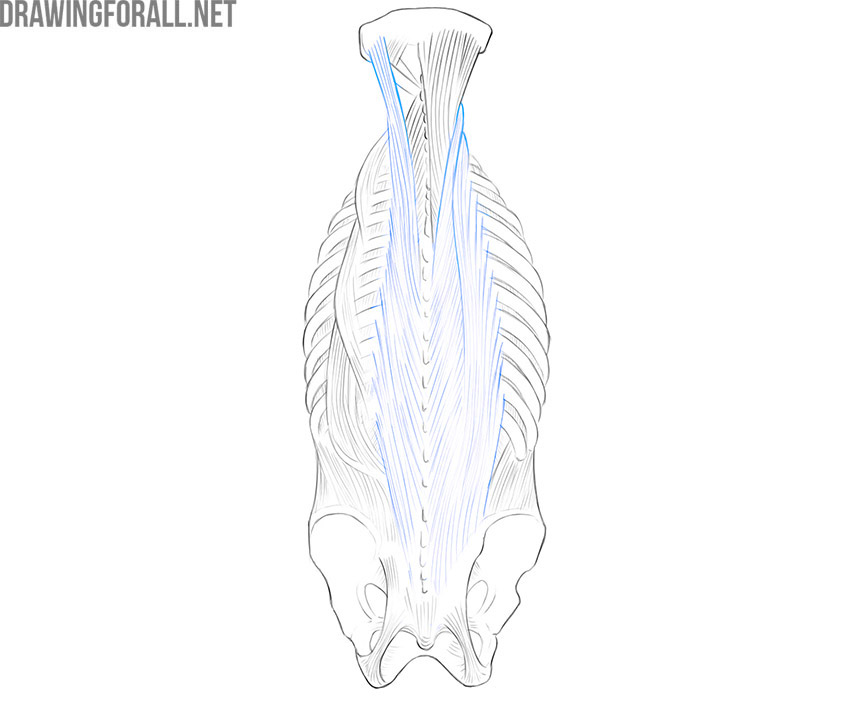 The abdominal muscles are divided into three categories – anterior, lateral, and posterior. For plastic anatomy, two muscles are of particular importance, which forms the anterior and lateral walls.

This muscle looks like a long, wide strap that extends from the pubic symphysis to the costal angle. Throughout its entire length, the rectus abdominis muscle is intersected by several bridges. This is how rectangular areas are formed, which are called abs. 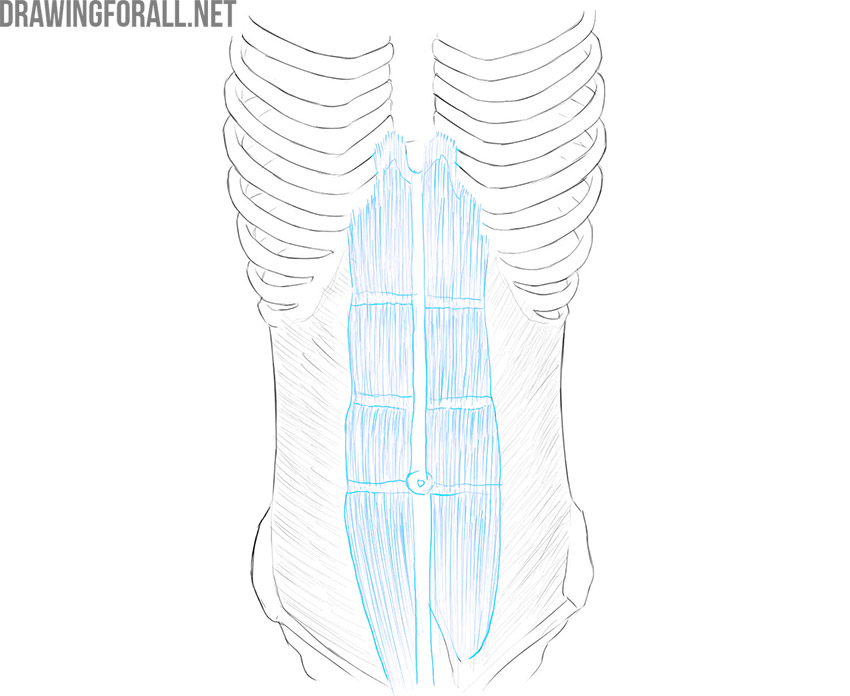 The fibers of this muscle are like a muscle corset that is stretched between the ribs and the pelvis. The external oblique muscle of the abdomen starts from the outer surface of the eight lower ribs, literally intertwining between the bundles of the serratus anterior muscle. This further emphasizes the convexity and relief of the serratus anterior muscle.

The abdominal external oblique muscle, like the rectus muscle, is clearly visible in people with a low content of subcutaneous fat or with very developed muscle mass. 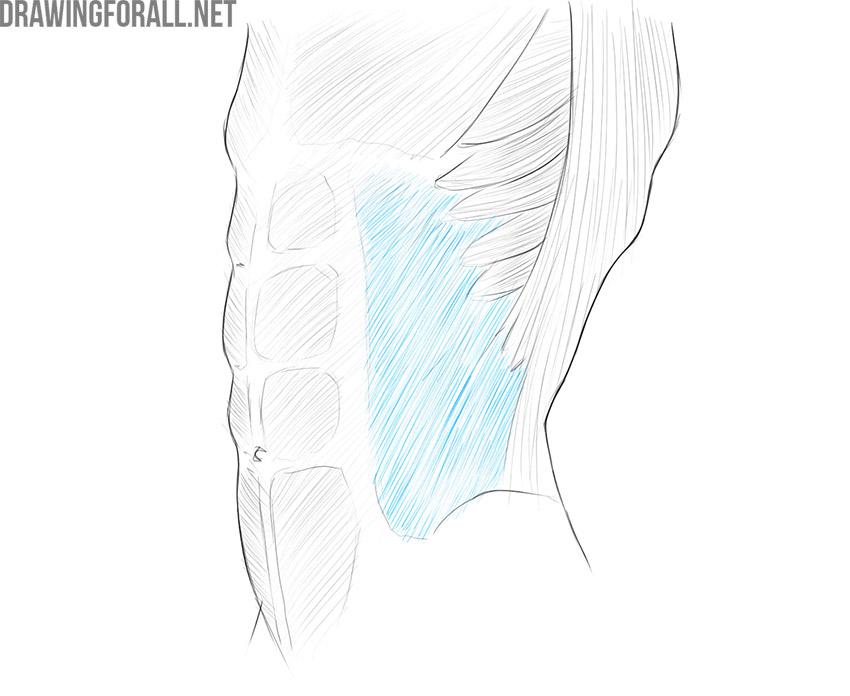 In this illustration, we can see the rectus abdominis muscle against the background of the deeper abdominal muscles: 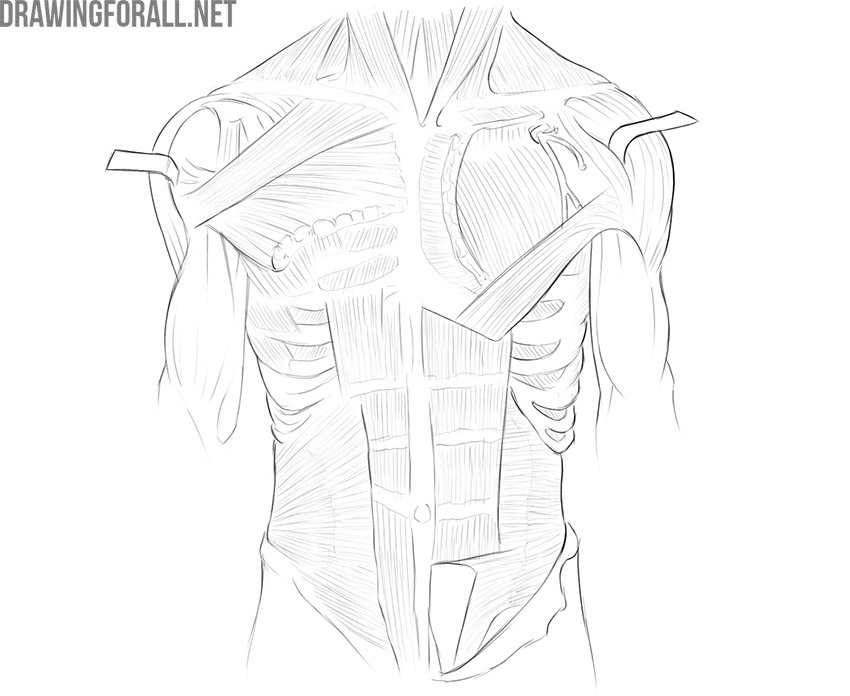 The border that separates the chest from the neck runs from the jugular notch of the sternum along the superior edges of the clavicles and the acromioclavicular joints. Further, the line passes to the back and continues to the spinous process of the 7th cervical vertebra.

The lower border of the chest is projected onto a line that goes from the xiphoid process of the sternum along the costal arch to the spinous process of the 12th thoracic vertebra.

The lateral border of the chest is the deltoid-thoracic groove, which separates the chest from the free upper limb.

The substernal region is bounded:

The scapular region has the following boundaries:

The scapular region has the following boundaries:

The vertebral region has the following boundaries: 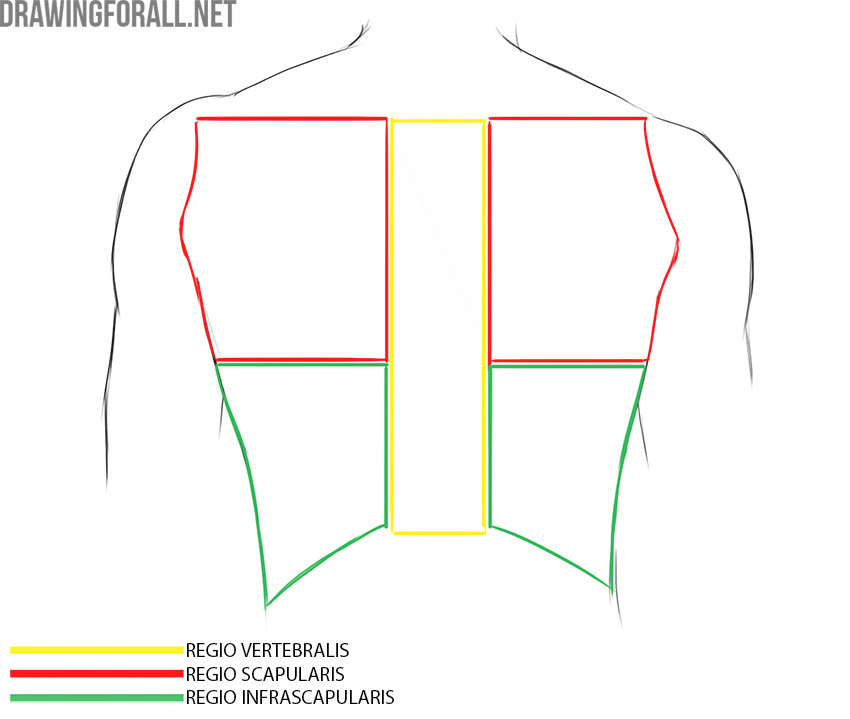 Like the chest, the abdomen has front and back walls, with the back wall corresponding to the lower half of the back.

The borders of the abdomen.

The anterior abdominal wall is divided into three areas – epigastrium, mesogastrium, and hypogastrium. To draw the boundaries of these areas, we need to draw two conventional horizontal lines. The upper line is drawn through the lowest points of the 10th pair of ribs, and the lower one through the spina iliaca anterior superior. Thus, the upper region is the epigastrium, the middle is the mesogastrium, and the lower is the hypogastrium. 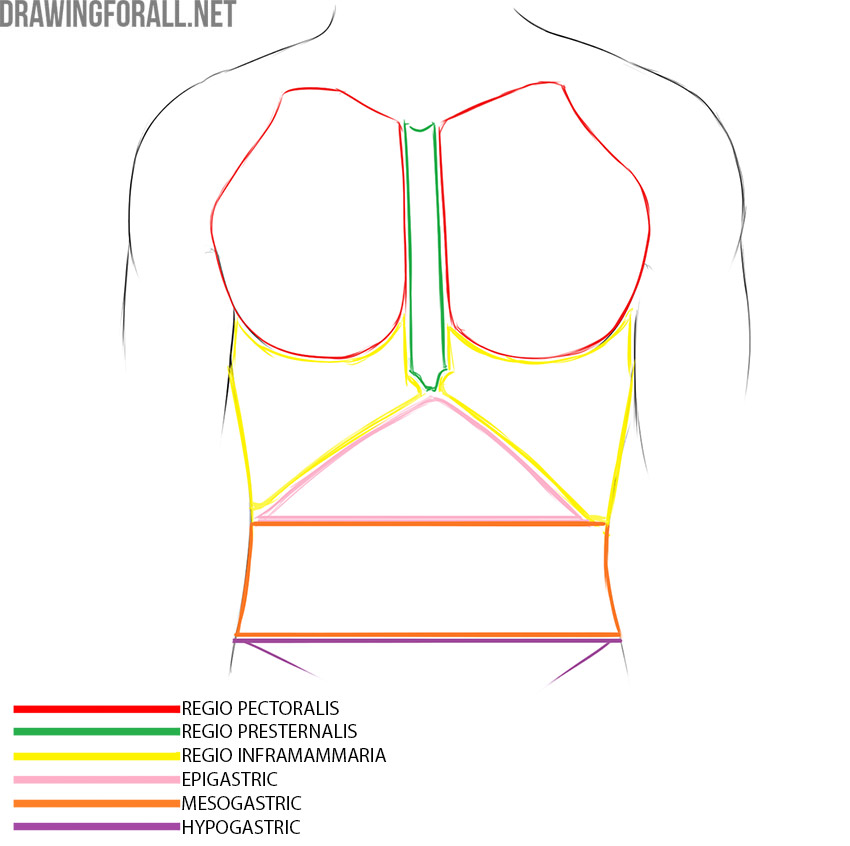