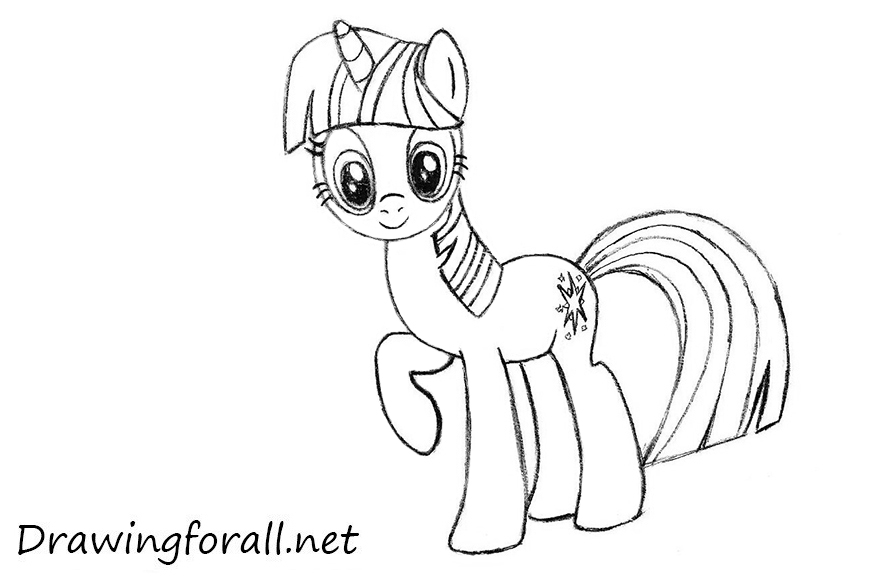 will be especially interesting for those who like to draw cartoon characters. In today’s drawing guide, we will learn how to draw a pony Twilight Sparkle.  By itself, the tutorial is not complicated, but we break it down into a large number of steps to make it easier to comprehend the drawing process. So, let’s start this tutorial.

First, we sketch the Twilight Sparkle’s head in the shape of a simple circle and sketch the lines of facial symmetry. A note of urgent importance – the lines of the first steps should be as light as possible. 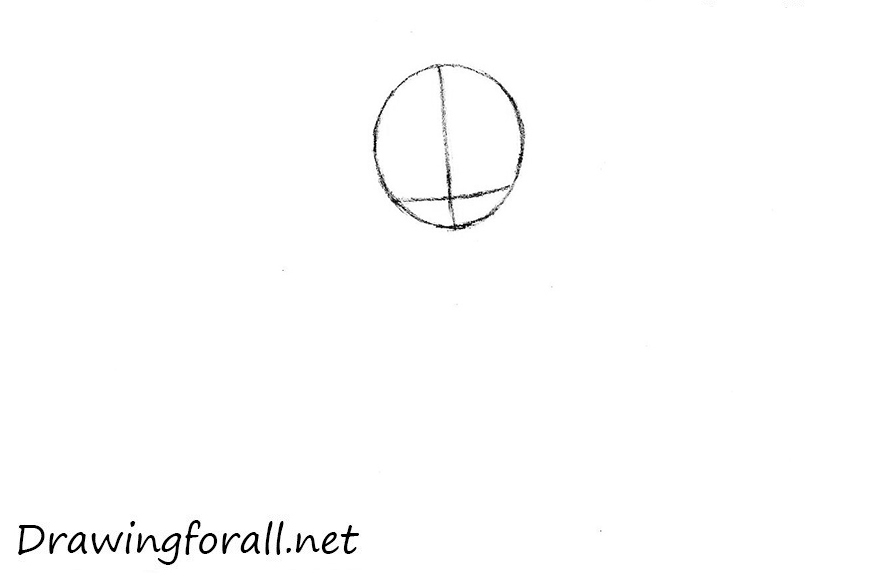 In the second phase, we will draw Twilight Sparkle’s torso. Draw a small oval just below the head. This oval should look like a small pancake

Now draw Twilight Sparkle’s neck using two short and curved lines, that connect the body and the head. The neck should expand closer to the torso of the pony. 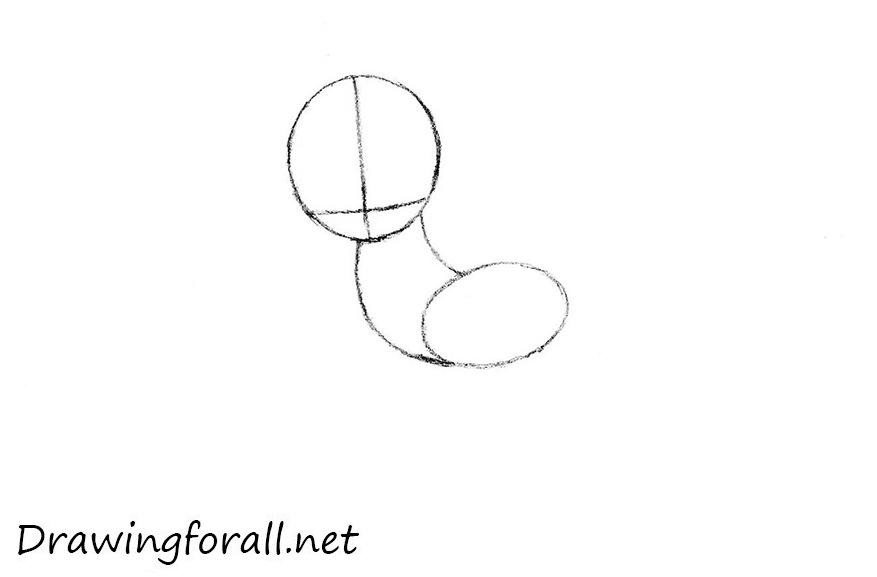 In this step using long ovals, we draw the front pair of legs of our pony. Recall that in the first steps we use very light lines. 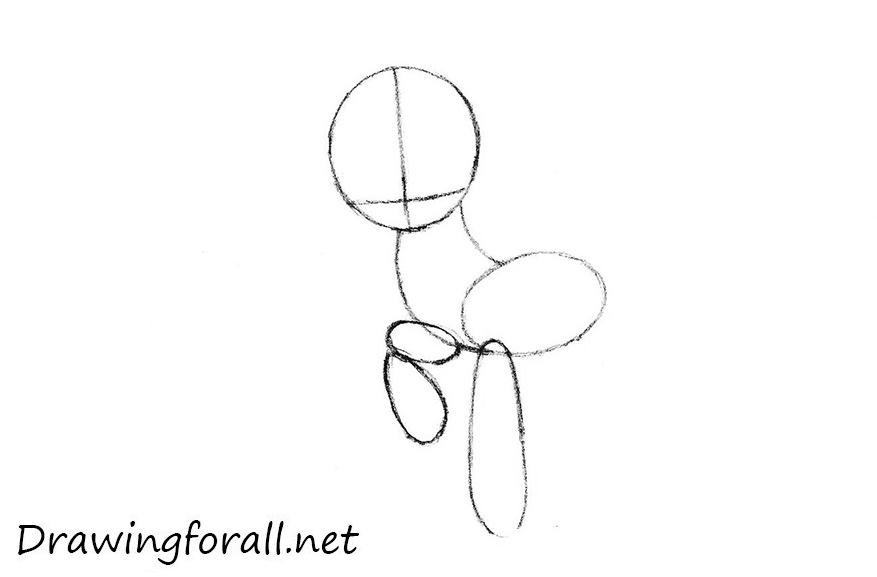 Now draw the pony’s hind leg and eyes. It’s very simple – leg is very similar to one of the front legs, drawn in the previous step, and eyes will be in the form of usual ovals. 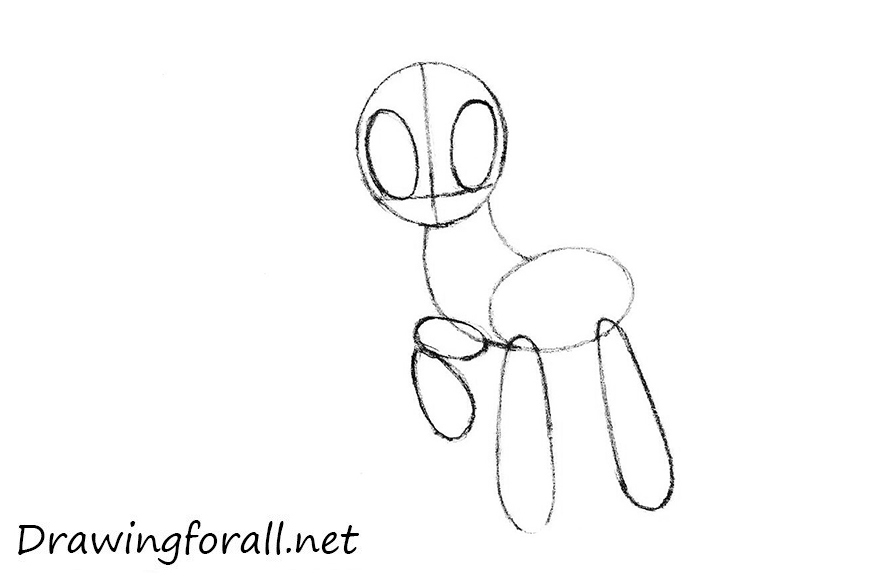 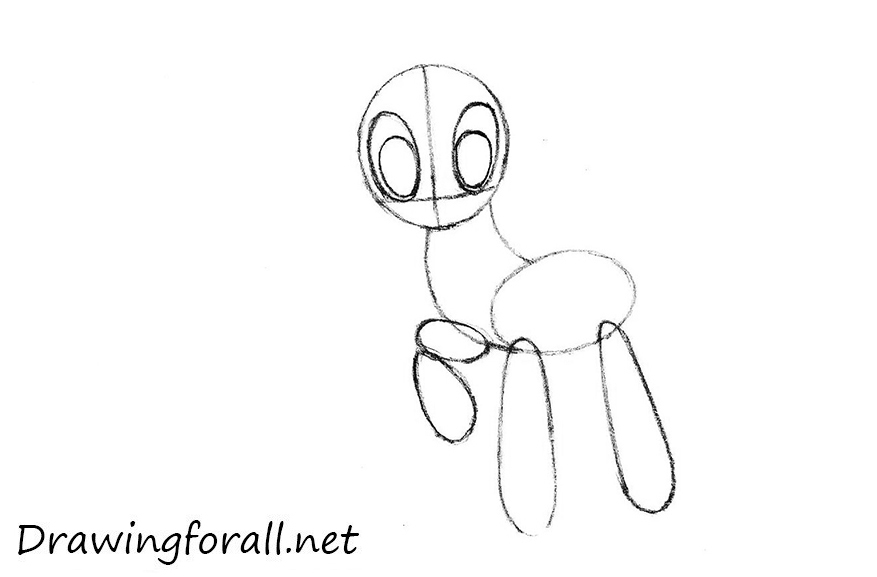 This is a simple step. Just draw highlights in the pupils and move to the next step. By the way, we are in the middle of the lesson on how to draw Twilight Sparkle. 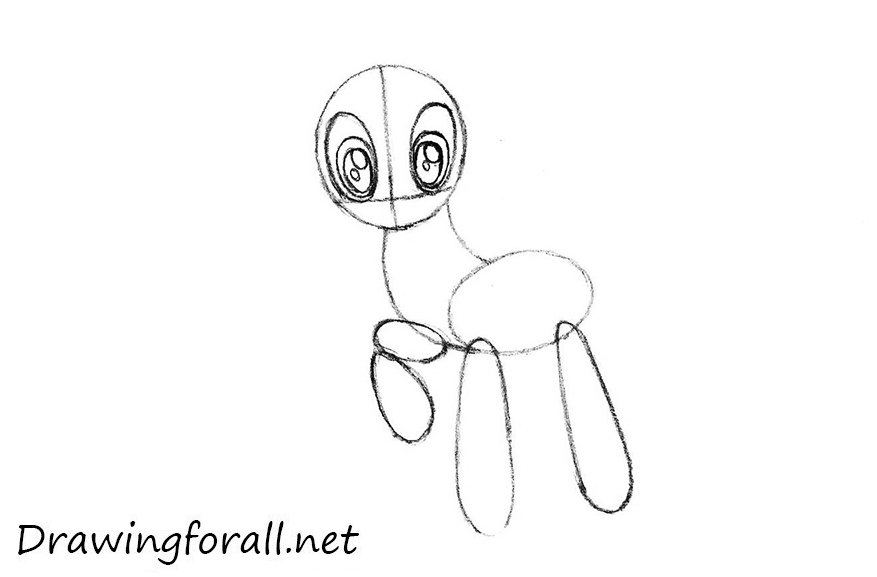 In this step, we draw Twilight Sparkle’s bangs and the ear. Try to draw the bangs as in our example and use very flowing lines. 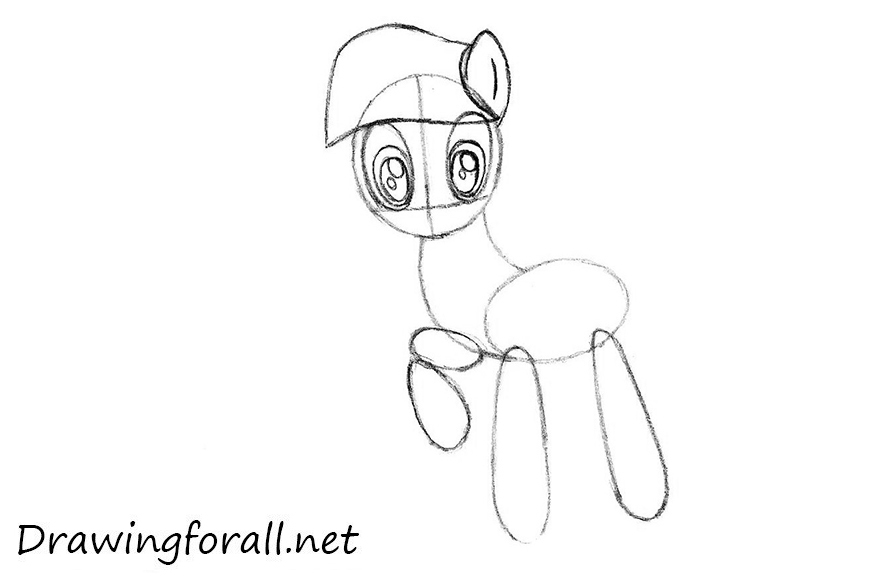 Now depict the horn and add the details to the forelock. It is very important to repeat the pattern as in our picture. 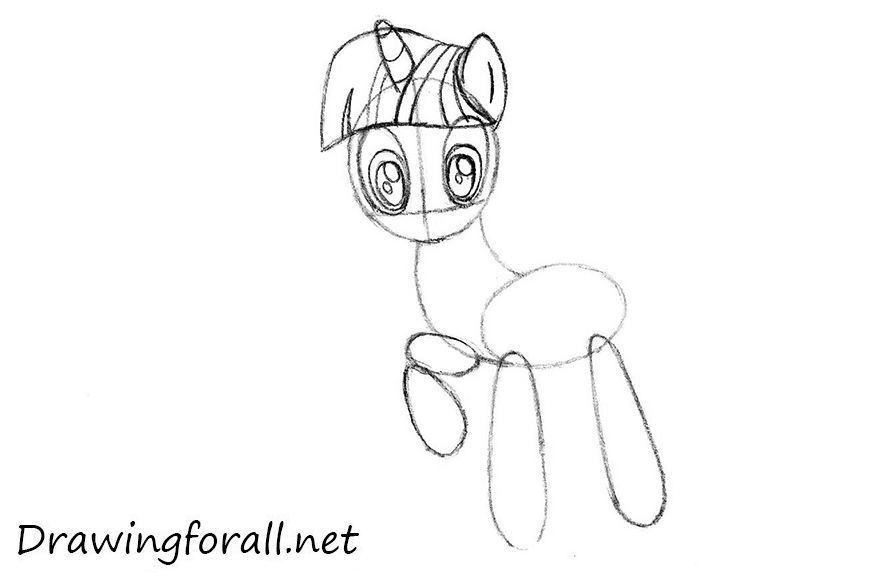 By curved lines draw the mouth and the nose. Draw my little pony’s nostrils and eyelashes. Our sketch slowly but surely becomes like a Twilight Sparkle drawing. 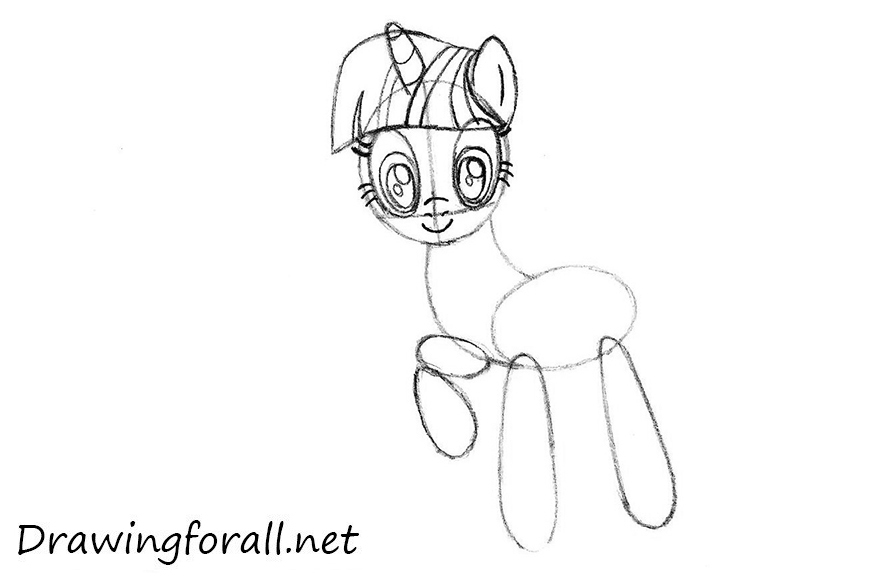 In this step erase the guidelines from the head and draw the mane of the cute pony. By the way, you can gradually begin to trace your drawing with ink or felt-tip pen. 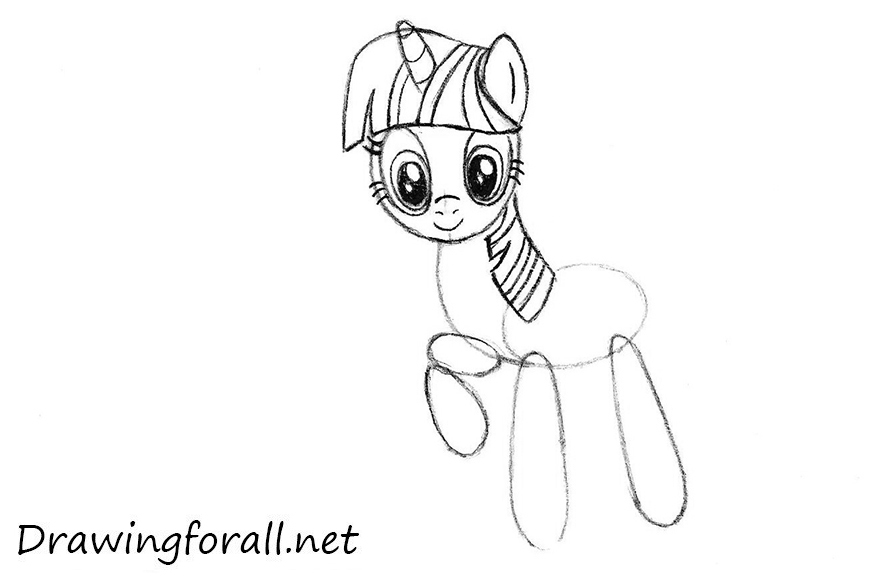 Here we draw the legs by using the guidelines. And don’t forget to add the remaining leg behind. 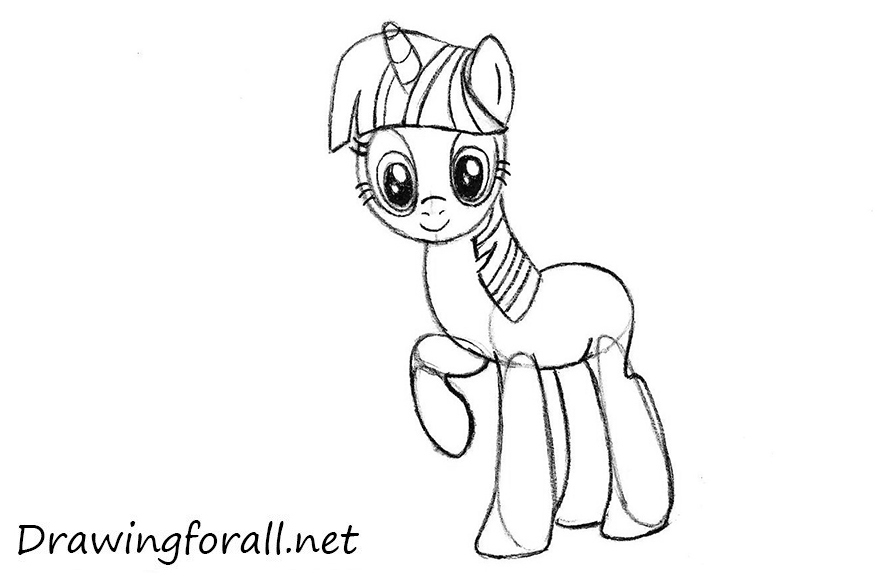 Erase all the remaining guidelines from the drawing of Twilight Sparkle. Depict the tail by long and curved lines. 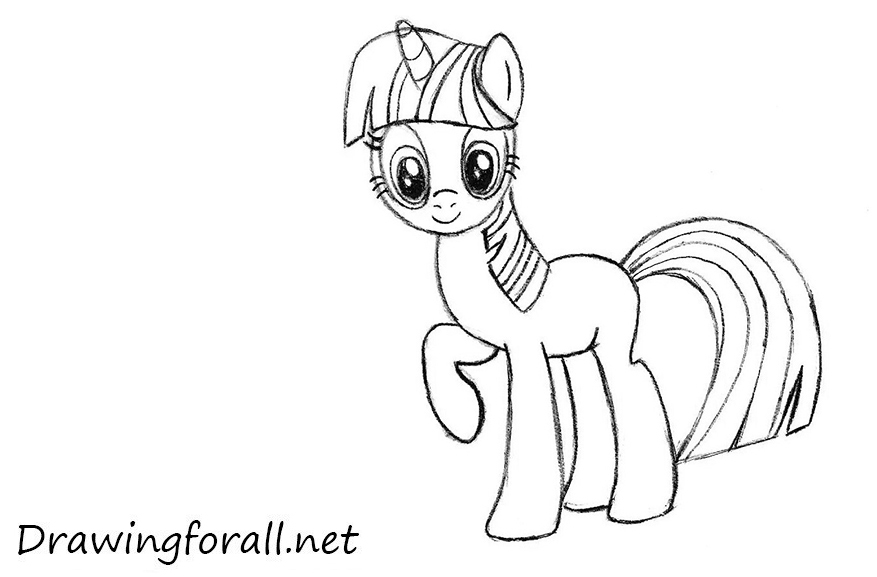 And remains the last step – draw the star just above the hind leg. Pony Twilight Sparkle drawing is ready.

You can leave the pony drawing black and white or paint over it as in our example. You can paint a picture using crayons, paints, markers, or a Photoshop. We painted the picture in Photoshop. 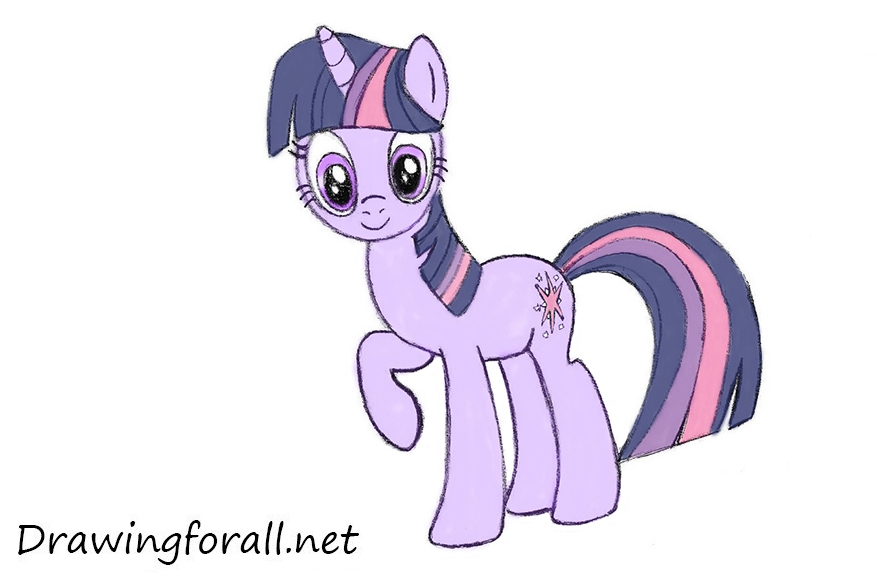 It was a drawing instruction about how to draw Twilight Sparkle easy step by step. Do you like this animated series? If so, which characters from My Little Pony would you like to see on the pages of Drawingforall.net? We hope you enjoyed this tutorial. Share it with your friends. Subscribe to us on social networks (such as Pinterest, Facebook and twitter) and wait for new drawing tutorials. In Pinterest, we usually publish shortened versions of drawing lessons (including this lesson about this little cute pony), and on Facebook we publish announcements of our future articles. Also do not forget to visit our page in DeviantArt, where the team of Drawingforall.net publishes a lot of interesting and useful content.