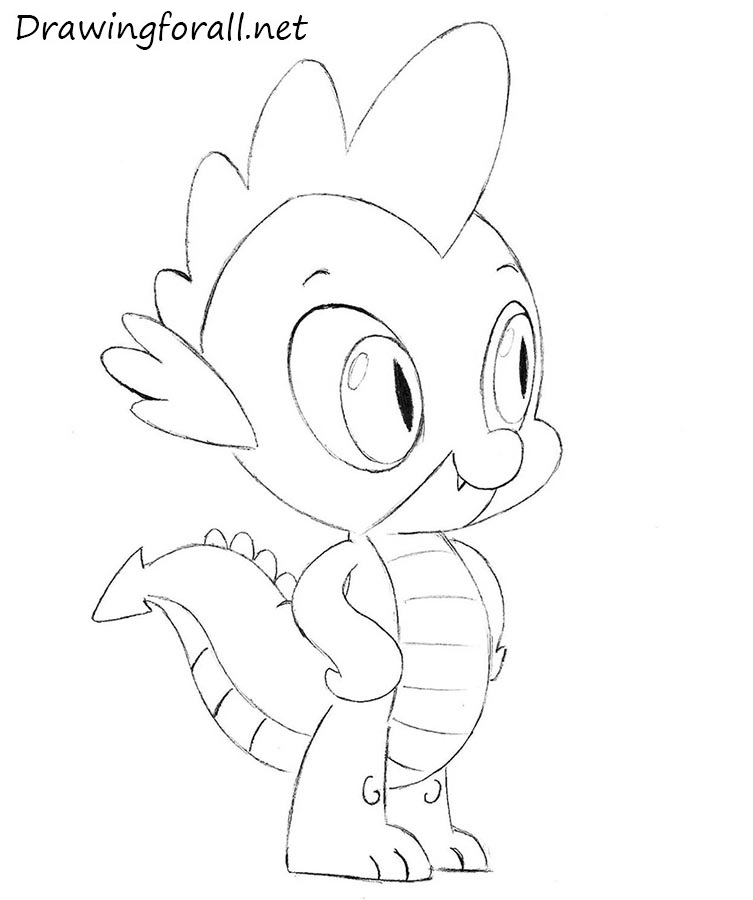 Today on Drawingforall.net you will find a drawing lesson, in which we will teach you to sketch a cartoon character from the universe of My Little Pony. In one of our previous tutorials we already drew one of the most popular characters from My Little Pony – Twilight Sparkle. And today we will learn how to draw draw Spike from My Little Pony. So, let’s start creating!

First things first depcit a circle as a guide for the head of Spike. We want to note, that in the first steps you should not press down too hard on a pencil. Use smooth lines for outlines at this stage of the instruction on how to draw Spike. 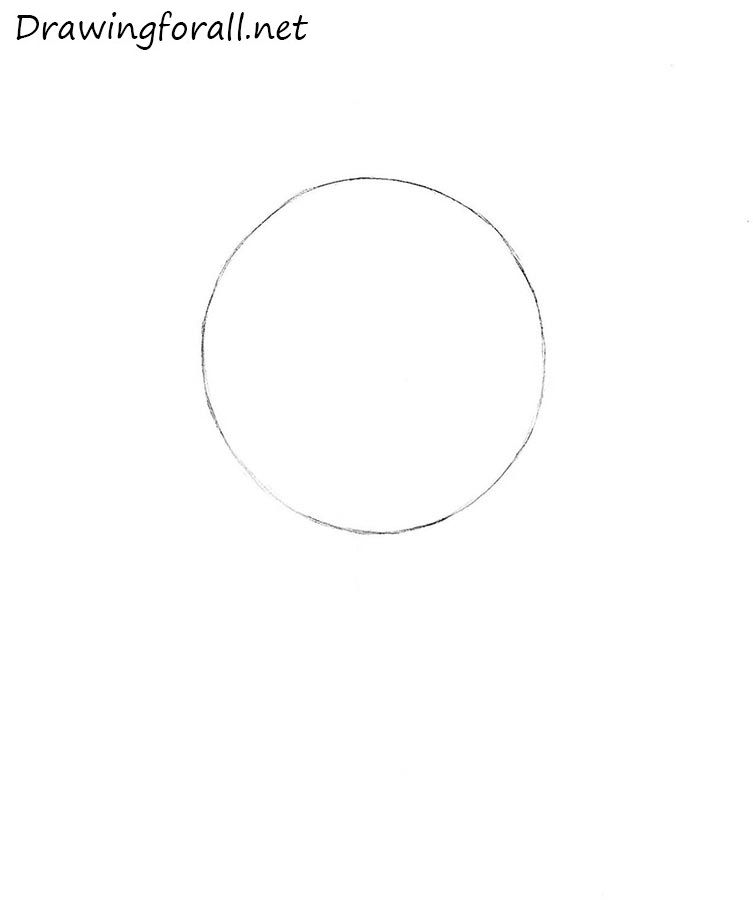 Sketch out the guidelines of facial symmetry. At first, depict a vertical line which will help us to find a center of the face of Spike. Draw two horizontal lines as in our example. They will help us to draw Spike’s eyes. Note that the lines should be slightly curved. Below the head outline a torso, using a shape similar to a drop. 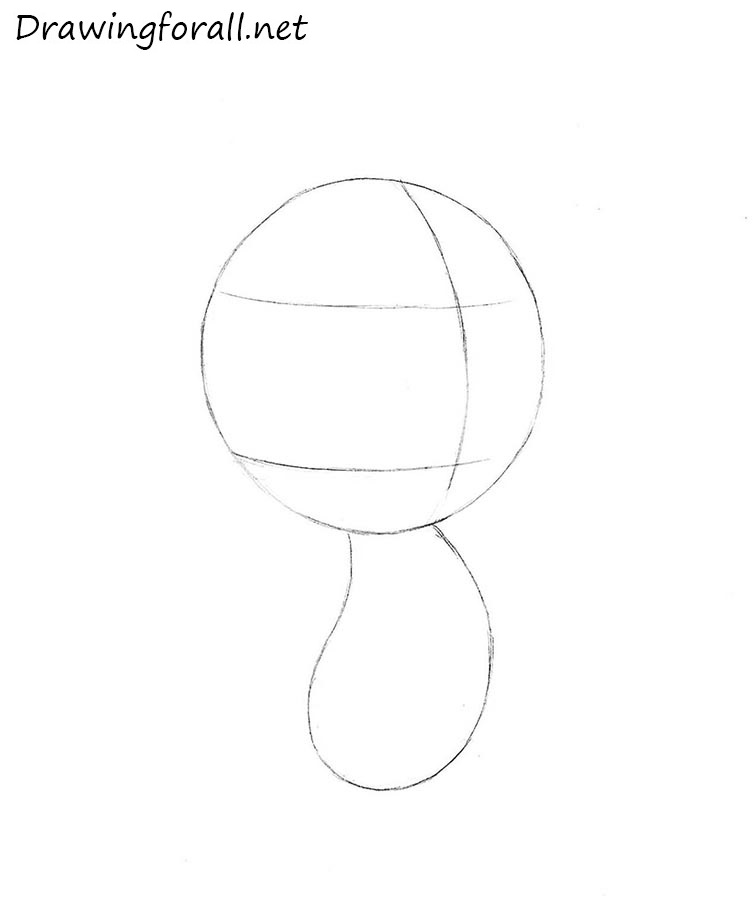 Using the guidelines from the previous step draw facial features of Spike. At first, using ovals draw the eyes. Then, using a curved line depict a nose. By the way, the similar nose we drew for Karlsson in the instruction on how to draw Karlsson. 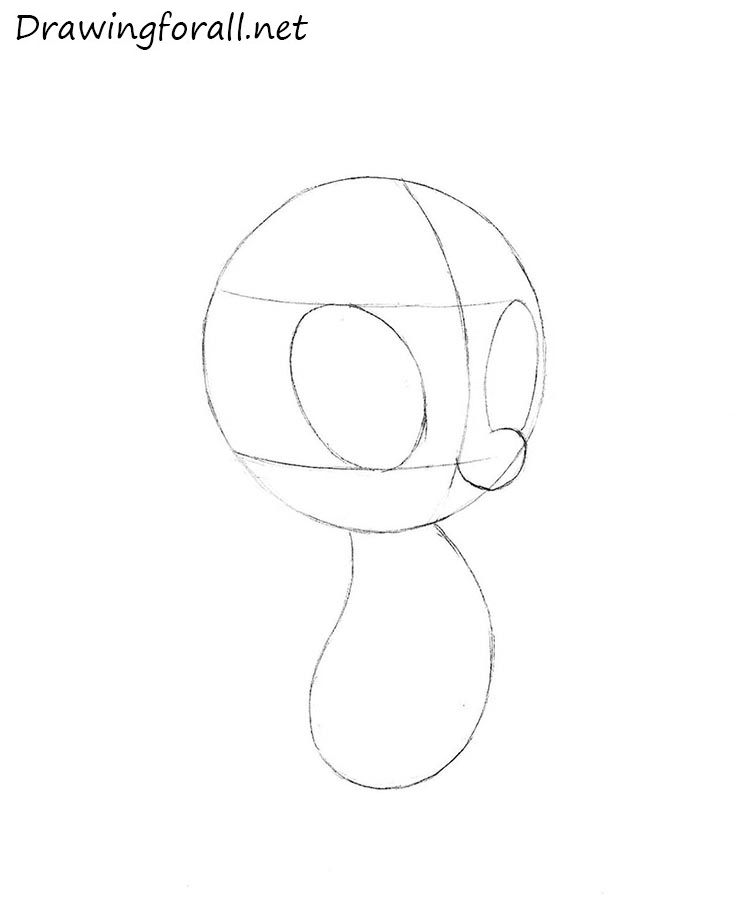 In this step, we add some details to the face of Spike. At first, using circles draw irises. Then, inside of the irises draw pupils. Using a curved line sketch a cheek and move to the next stage. 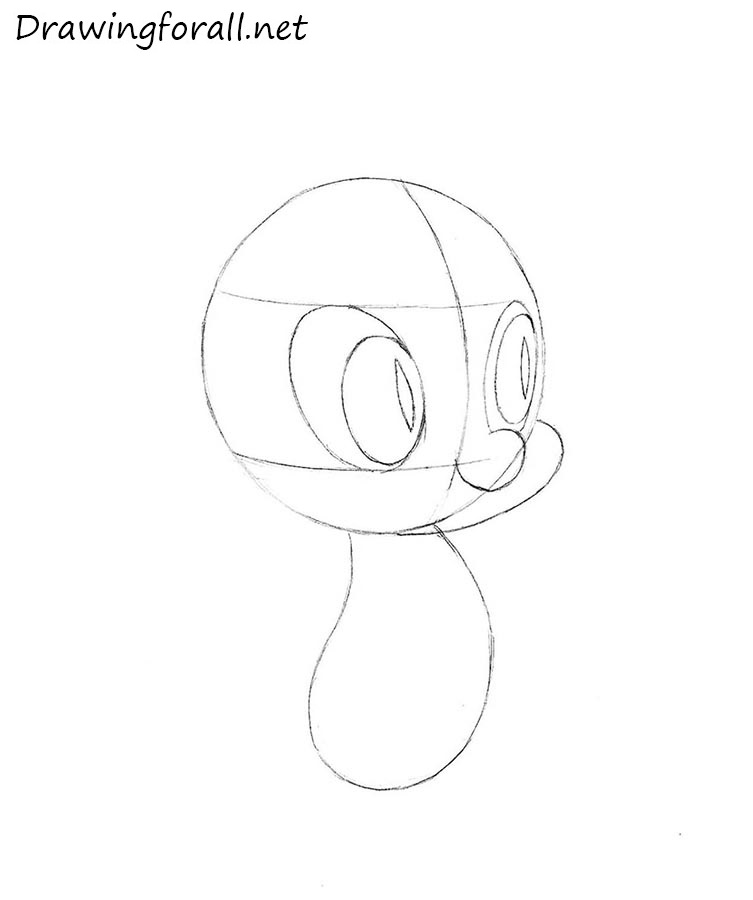 Erase all unnecessary guidelines and draw a contour of the ear of Spike. Use very clear and smooth lines to trace your Spike drawing. 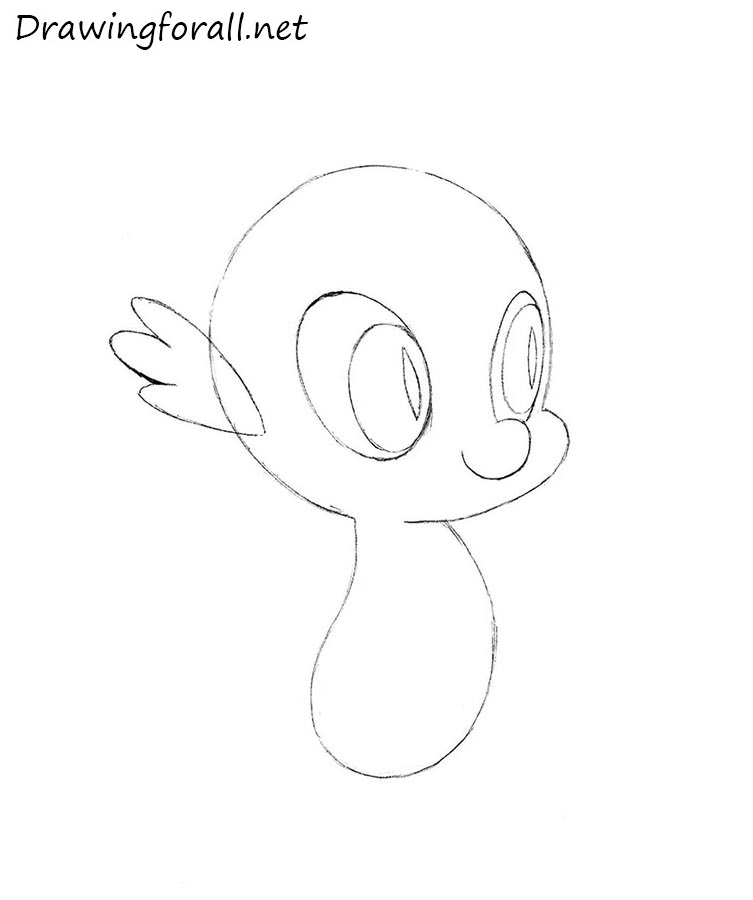 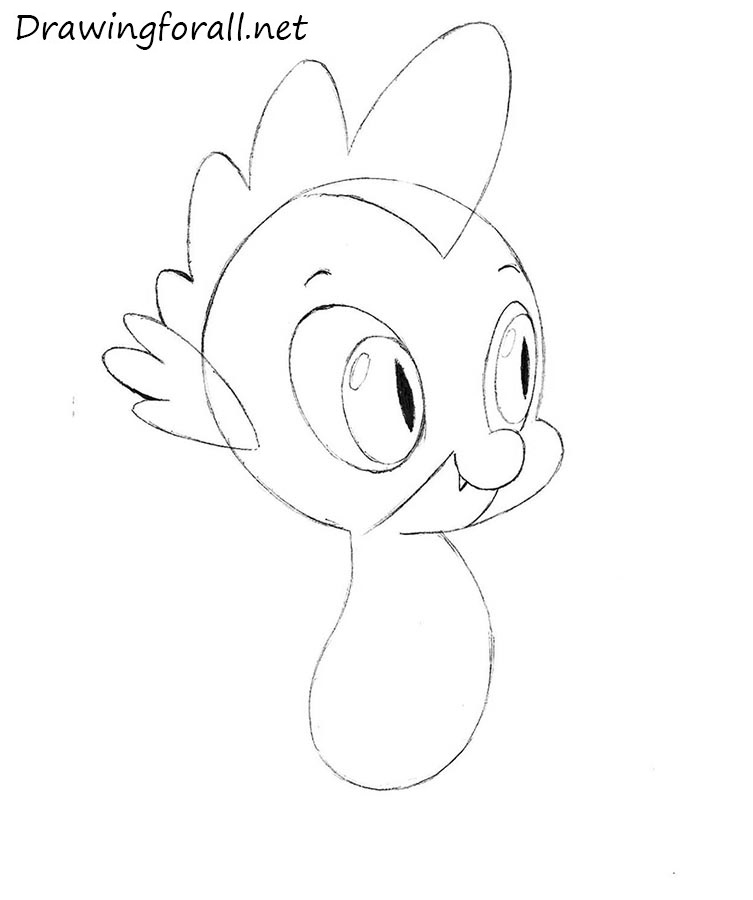 At this step we will sketch out the limbs of Spike. Using curved lines draw hands. Draw legs in the form of ovals. In this step you also should not press down too hard on a pencil. 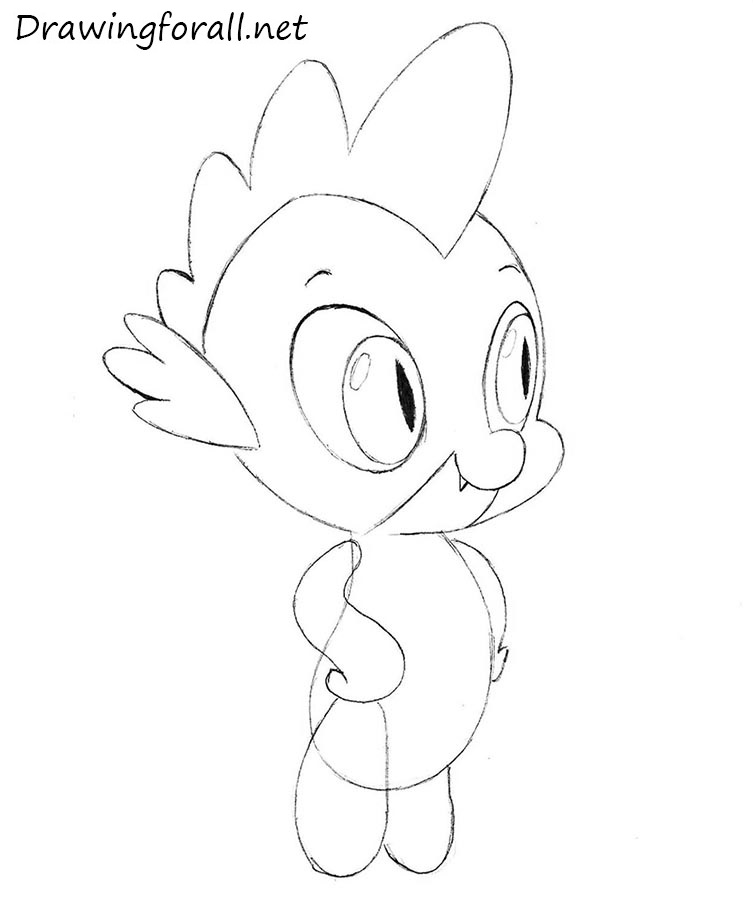 Slightly change a form of the legs and draw feet as in our example. Draw a thick tail with an “arrow” on the end. If your Spike sketch looks like ours, then move to the next stage. 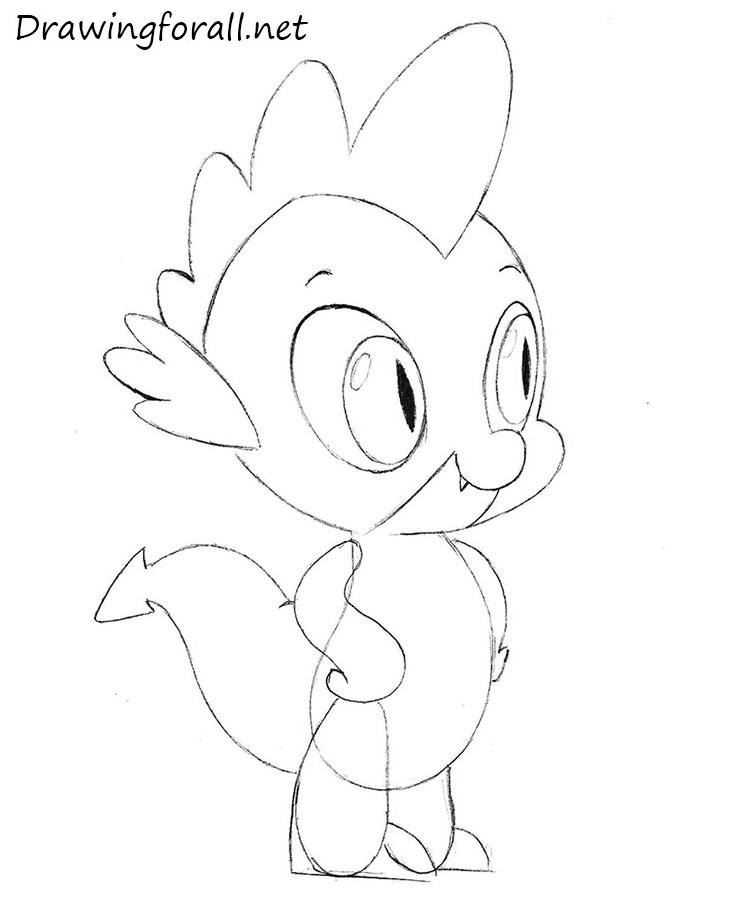 So we got to the last step of the guide on how to draw Spike from My Little Pony. Remove all the guidelines. Now depict an area with horizontal stripes on the front of the torso and the lower part of the tail. Depict the knees and draw toes. Delete remaining unnecessary strokes and darken the lines.