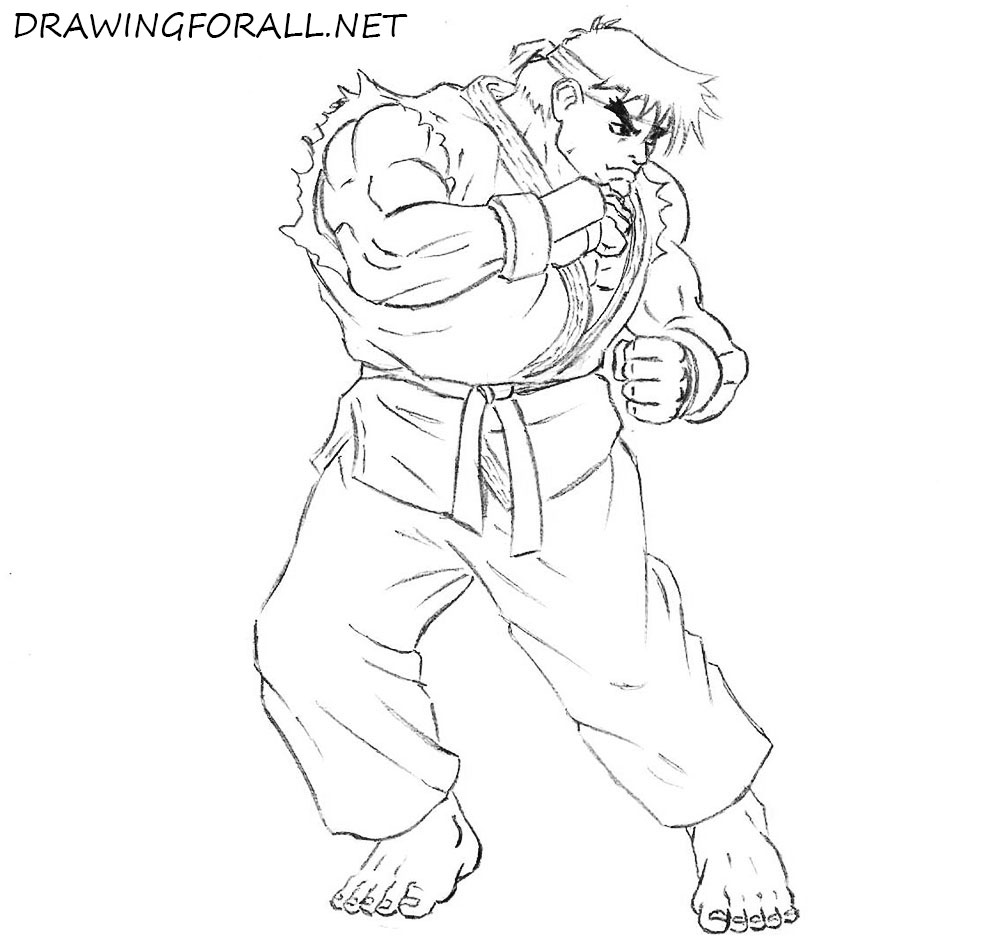 Hello! Today we draw Ryu, who is one of the main characters of the fighting game Street Fighter. Note that this game is one of the oldest of the whole genre.

Like all lessons in drawing people, we begin with a stickman. Note  features of the pose – Ryu stands sideways to the intended opponent, but the torso deployed in his direction. His head tilted slightly forward and pressed against the shoulder – the same posture you can see in the drawing tutorial about Boxer.

To gain insight with proportions, look at a drawing lesson about Captain America – Ryu has a similar physique, so the rules listed in the first phase of the lesson well apply to the current lesson. 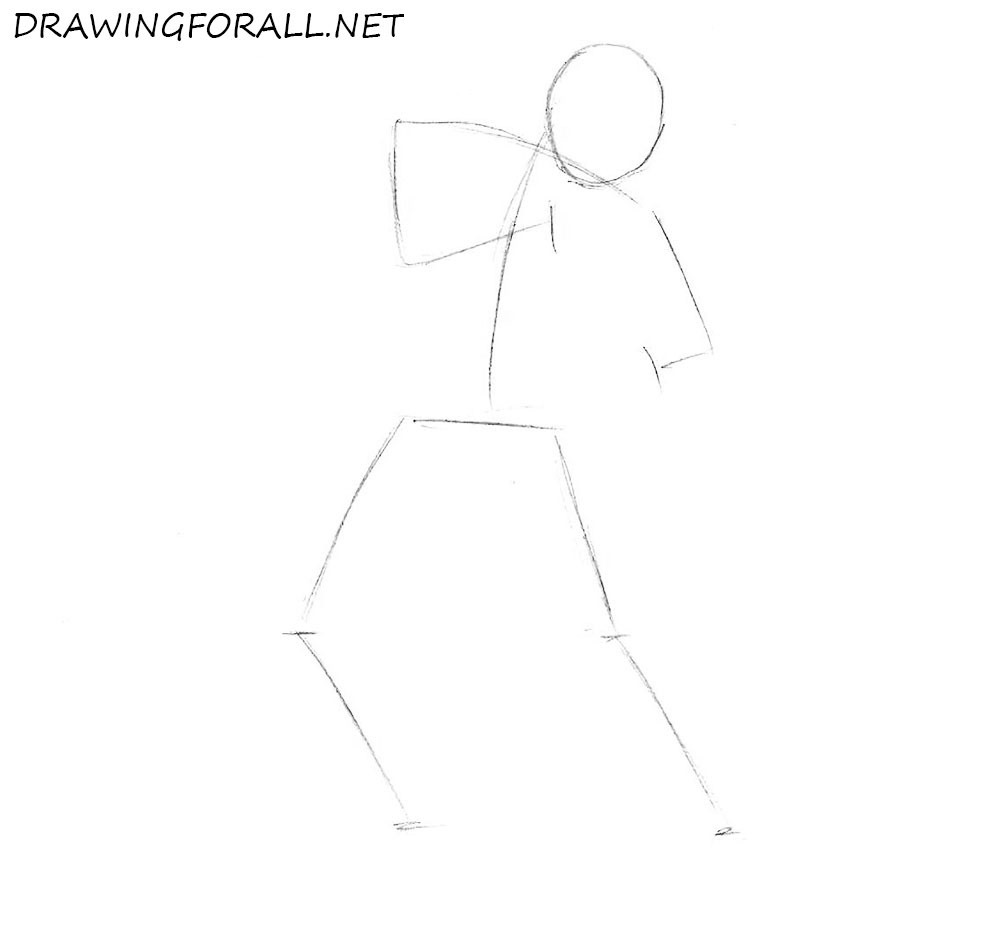 Now, let’s make a silhouette of Ryu. Look – Rue very stocky but not fat. He looks so due to V-shaped torso. Another one notable moment – we can see only the upper side of the neck, it looks like if the head is practically sticks out of his shoulders.

So, first draw the lines of the face, that will help us to draw the facial details in the next steps. Then sketch out the contours of the torso. Then draw the shoulders in shape of circles, and arms using cylinders. Don’t forget to sketch out the elbows and hands. Next, draw the groin, which looks like triangle and legs, in shape of cylinders. Note that the body should be very massive. Sketch out the knees and feet and proceed to the third step. 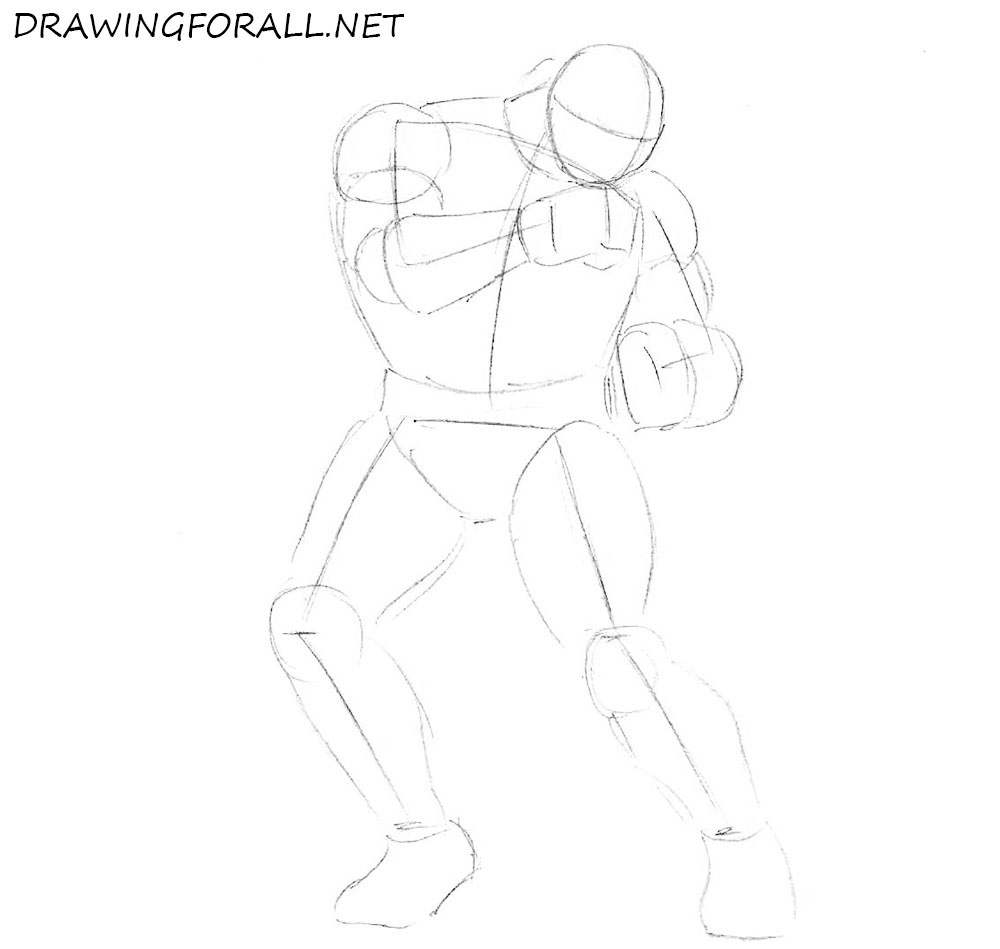 Ok, now you can draw the contours of the face. As you can see, we have created a silhouette of Ryu, moving from top to bottom. Now will add details in the same direction. The style of drawing of Ryu (as well as entire Street Fighter). 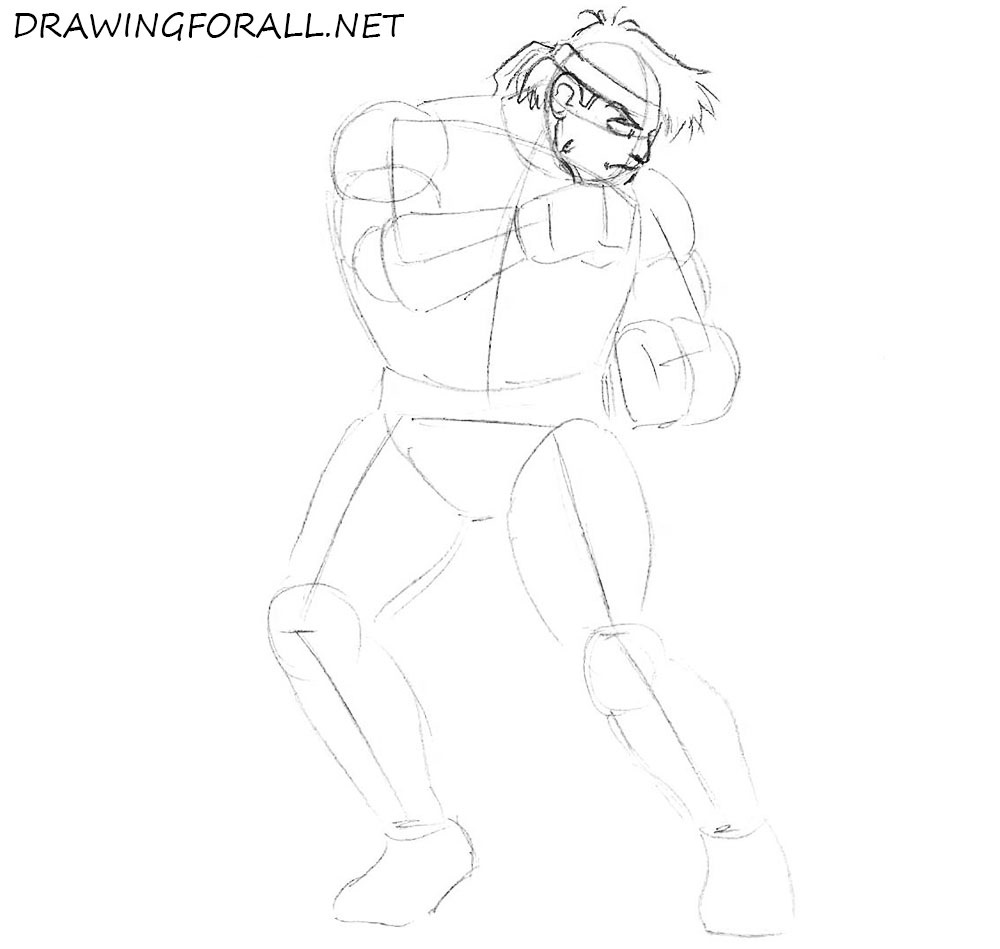 This step is very simple. In this step we make the face of Ryu a more detailed. First erase the guidelines of the head, such as the circle of the head from the first step and lines of the facial symmetry.

Then make the eyebrow more thick and dark. Correct the lines of the face, draw the pupil inside the eye and add some wrinkles. Also, don’t forget to draw the lines of neck muscles, using a couple of simple lines. 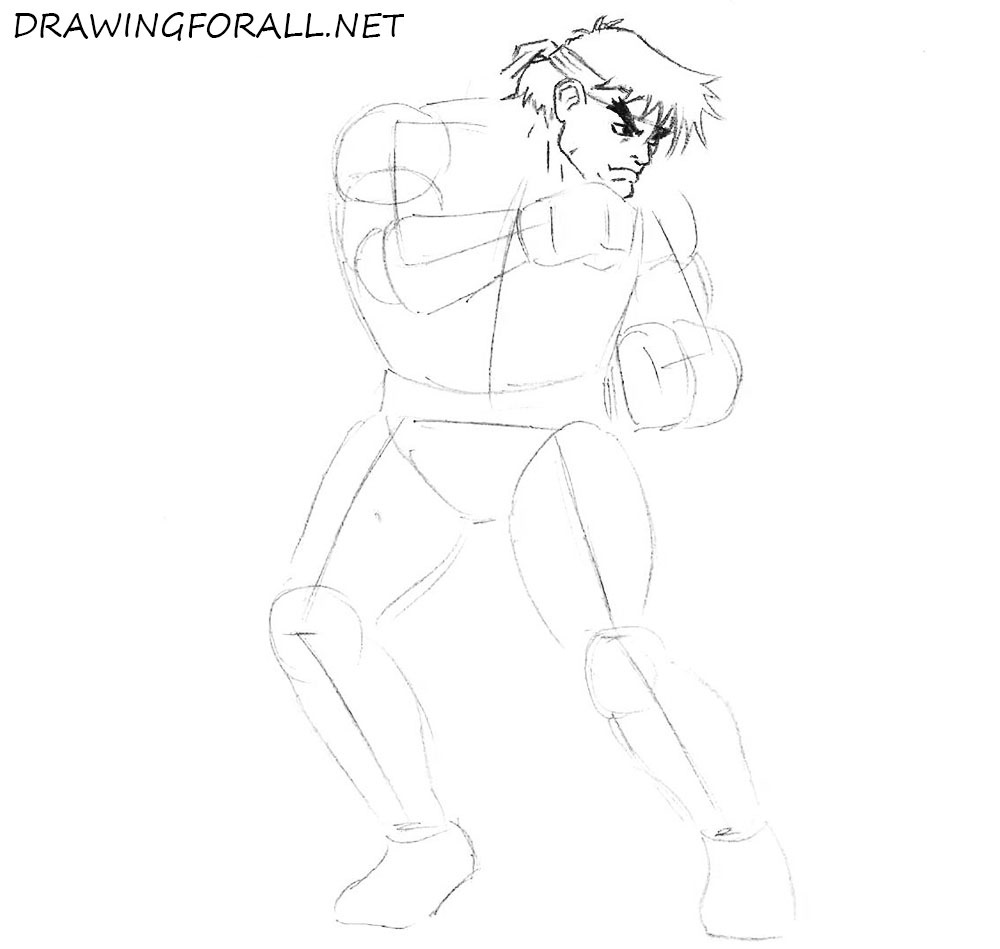 Ryu wears a gi without sleeves, the contours of which we now outline. First draw the lines of the collar. Using ragged lines draw the edges of torn sleeves. Then draw the belt and part of gi, which hangs down below the belt. Proceeding to the lower part of the clothing of Ryu, we first draw the groin area. Then move to the legs.

Please note that on clothing of Ryu very few direct lines, it is as if it is made up of folds. At the end of this step, mark the toes, finger, and some lines of muscles on his arms. 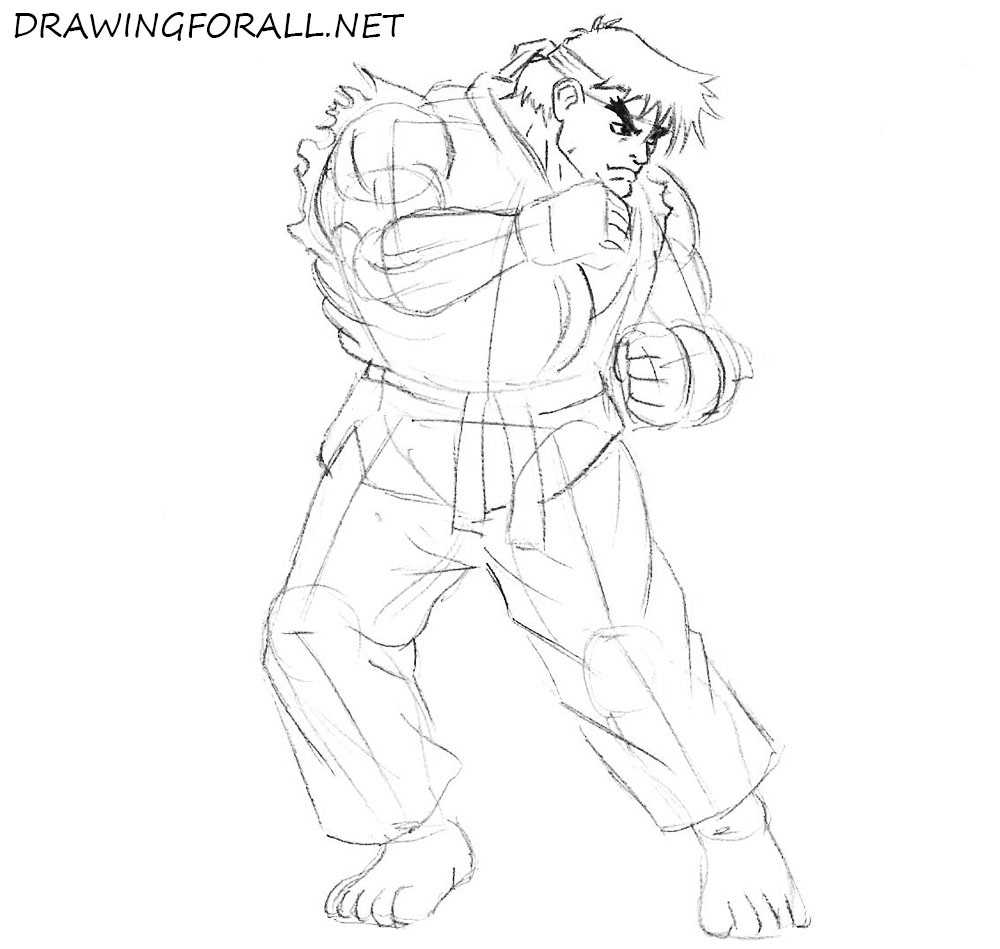 Proceed to the final detailing. Erase the remaining guidelines. UIsing clear, confident lines draw the contours of gi (do not forget about the collar). The same clean and confident lines we use to draw the muscles. It seems that there is a huge amount of muscle, but it is not.

After muscles of arms draw the hands, weared in gloves. At the end of this step draw out the feet and toes on them.

This lesson was dedicated to Street Fighter, be exact how to draw Ryu from Street Fighter. Do not forget that the best teacher is practice – so draw Ryu in different poses, and try to achieve perfection. And also don’t forget to subscribe to us in social networks, such as YouTube, Google+ and Facebook. All the best!