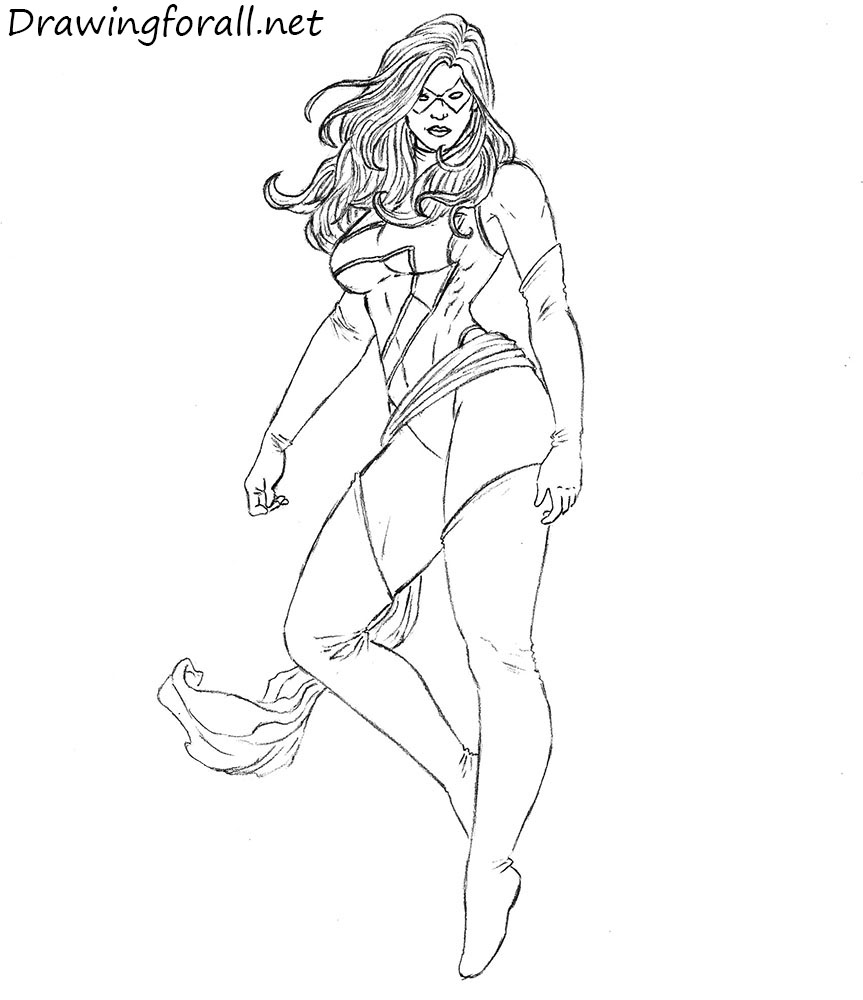 Hello, everybody! Today we have decided to publish a new lesson gradual drawing, in which we will tell you how to draw Ms. Marvel. This girl is not the most famous heroine of the comic book, but it is very colorful and memorable.

Carol Danvers (real name of Ms. Marvel) has a rich biography. She was a CIA agent, served in the anti-terrorist organization “Shield” under the leadership of Nick Fury and was in “The Avengers” team, fighting side by side with Captain America. Let’s start the tutorial and learn how to draw Ms. Marvel!

Let’s start with a stikman – we need him to sketch out the position of the character on a piece of paper, we denote the basic proportions and posture. You can use the fundamentals of the proportions of the female body (they are in one of our drawing lessons on how to draw a girl), but do not forget to emphasize the features of athletic Carol.

So first things first draw the head, using an oval, and draw the lines of the body, using simple lines. Her shoulders are slightly wider than the standard woman shoulders, and parts of the body – more volume. Note also the pose of Ms. Marvel – her body slightly deployed to the side, and the face looking directly at us. 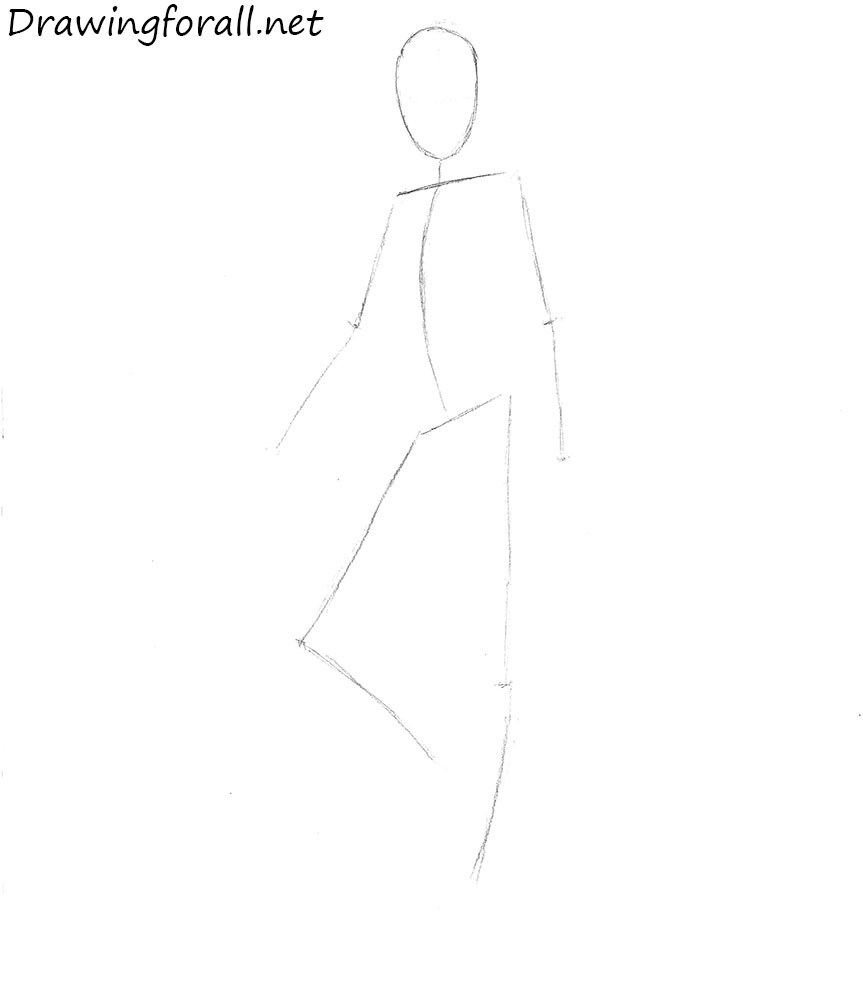 Let’s start adding volume to Ms. Marvel. We outline the contours of hair of Ms. Marvel – note due to wind the hair should be shifted to the left side from us. Then, add the volume to the torso, arms and legs.

Note that unlike the male torso, female torso has an hourglass shape. The similarity with the hourglass is formed by expanding the chest and hips and a sharp narrowing in the waist area. Arms look like elongated cylinders. Visually, they can be divided into three parts: the shoulder with upper arm, forearm and hand, from top to bottom, respectively.

By the way, please note – arms should reach the area in the middle distance from the waist to the knee joint. Legs of Ms. Marvel should be significantly more voluminous than her hands, especially hips. When drawing the legs notice the thickening in the hip area, curve of the calf muscles and feet. 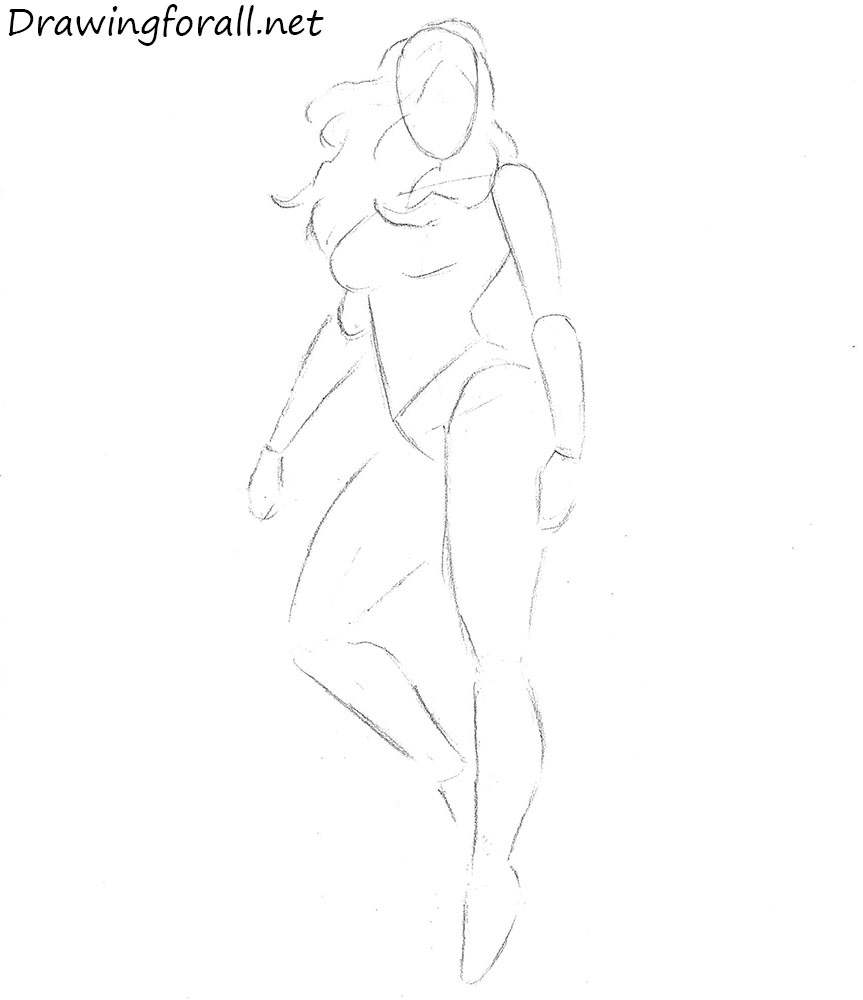 Draw facial features of Ms. Marvel. The eyes should be located approximately in the middle of the face and at a sufficient distance from each other. Below them is a small nose and plump, compressed lips.

Do not forget to outline the contours of the mask – it is formed by two rhombuses located around the eyes. Now about the hairstyle. Mark the parting, of which will depart the hair strands. Strands should be drawn in the direction from the roots to the tips. 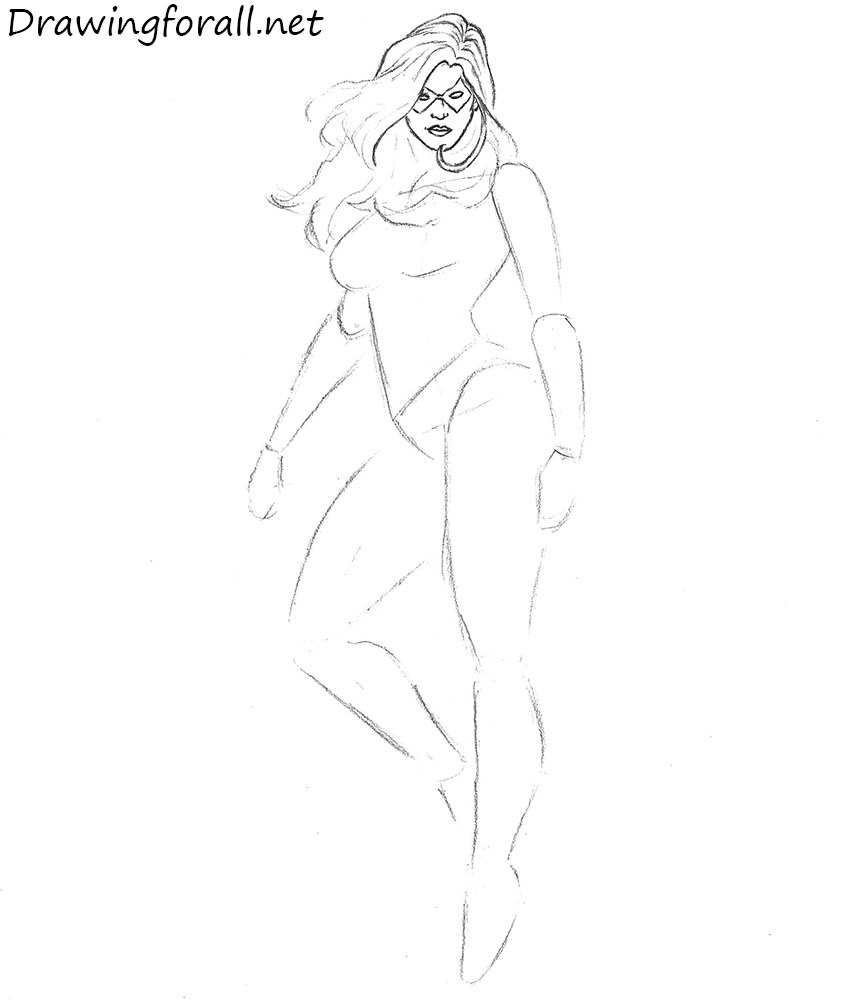 We continue the lesson in which we tell you how to draw Ms. Marvel. In this step we finish drawing the hair. It looks complicated and confusing, but if you focus on the layout of hair from the previous steps, and draw the lines as in our example, you will not get confused. Another part of this step – neck. Circle its contours, sketch out the the folds of fabric. 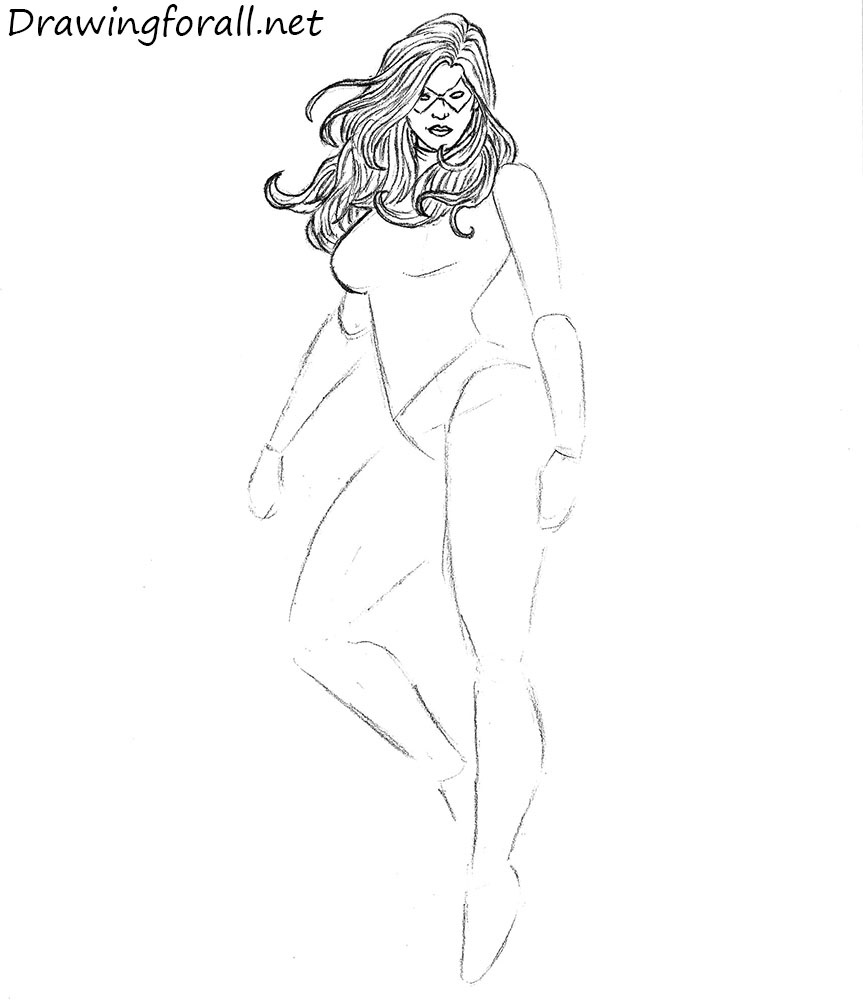 Draw the torso of Ms. Marvel. First draw the outer contours of the torso, using clear and confident lines, then draw a lines of abdominals, chest and ribs. Draw the lines of the clothing in the area of shoulders.

When the outer contours and inner anatomically important lines will be ready draw a logo on the chest. Please note that the logo should be bent in accordance with the curves of the body. 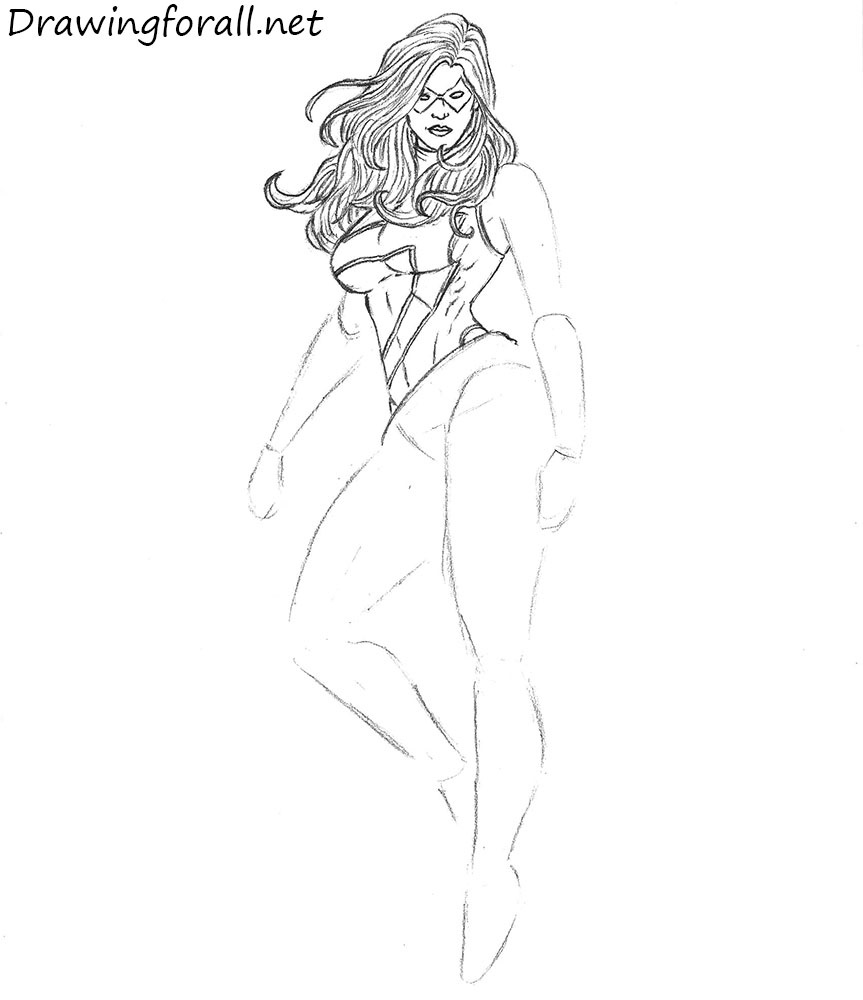 Time to draw the left arm of Ms. Marvel. Erase the extra guidelines, circle the contours and draw glove and hand. On the naked part of the arm we can not see any muscles except the deltoid muscle of the shoulder – its outline is quite well distinguishable.

Then draw the glove – it is quite high, closes more than half of the arm, and its upper edge is located above the elbow. Don’t forget to add some folds. The hand is a particularly difficult area for drawing, so we recommend you visit drawing lesson on how to draw hands. 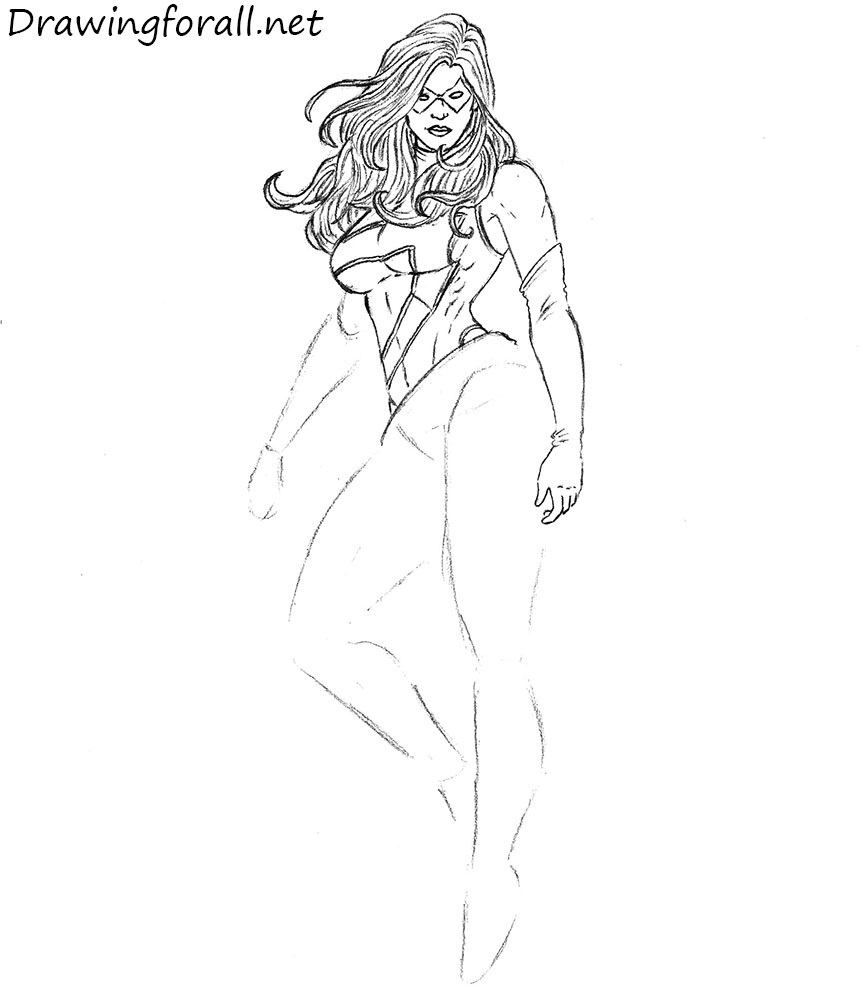 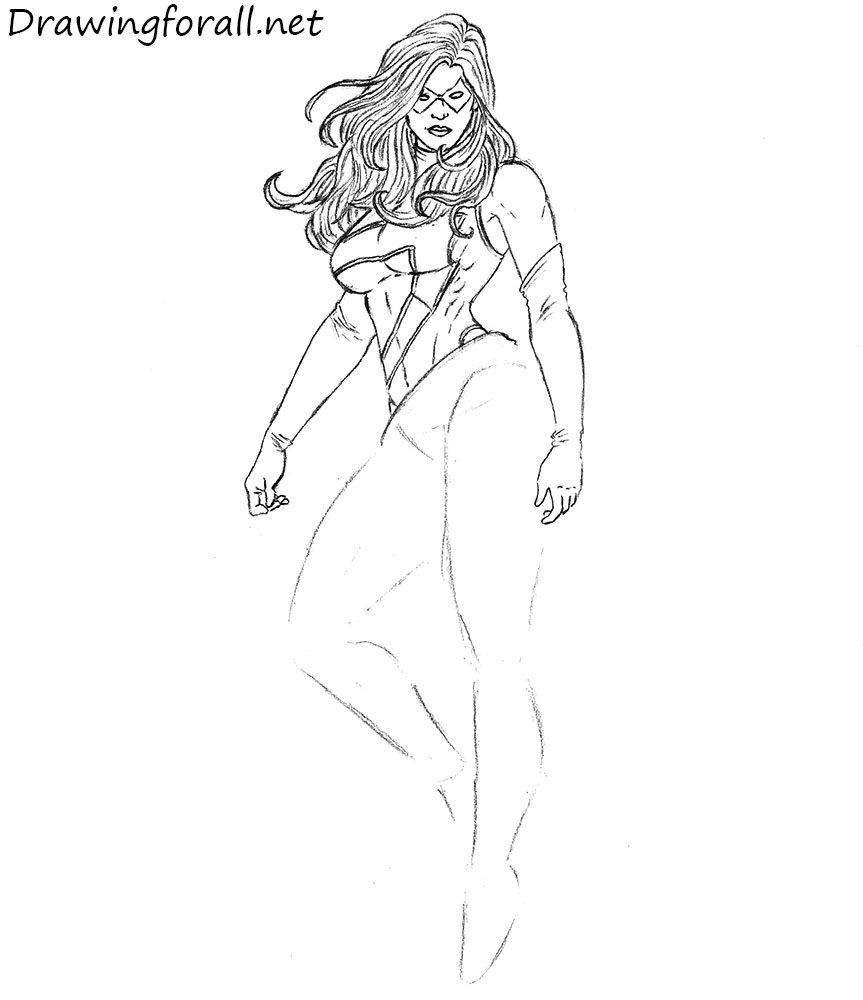 Circle the contours of the left leg, erasing extra markup of the previous steps. Boots hide almost the entire leg, and the only lines that are present on it – is folds. The folds located mostly on the areas of the knee and ankle. Do not forget to draw the belt, and add folds on it.

By the way, we can say that today we draw the femme fatale, because Carol was a girl of Wolverine, and some time after she became the wife of Deadpool. 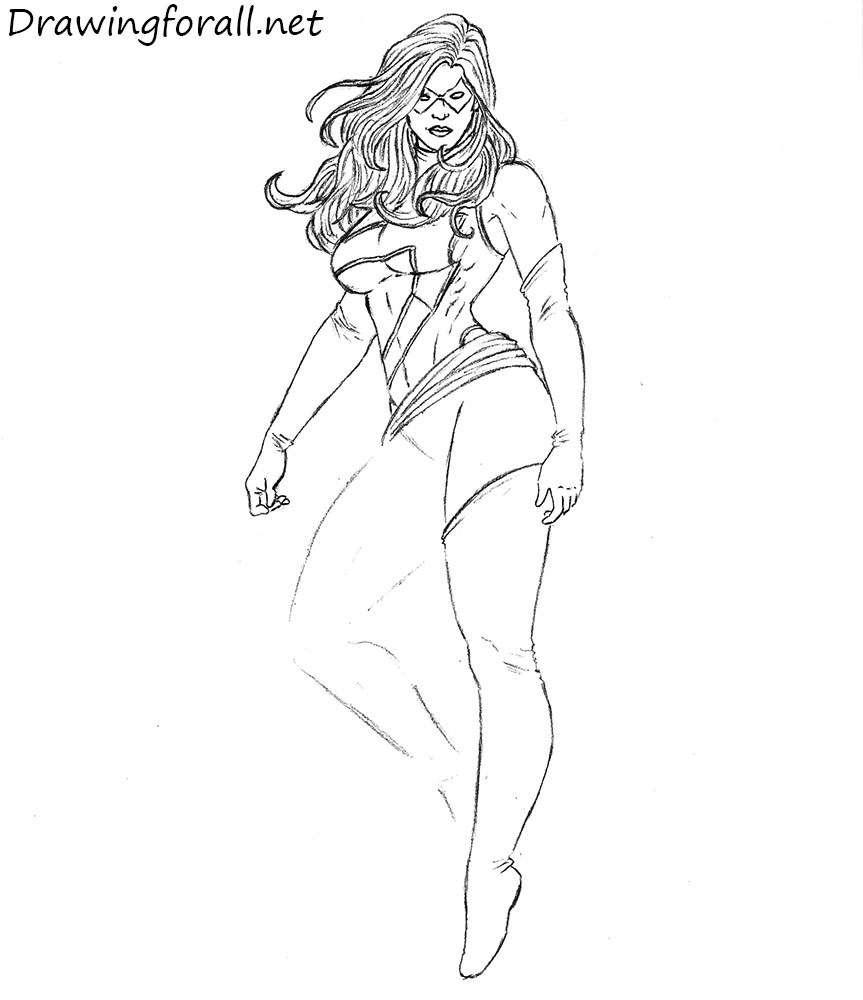 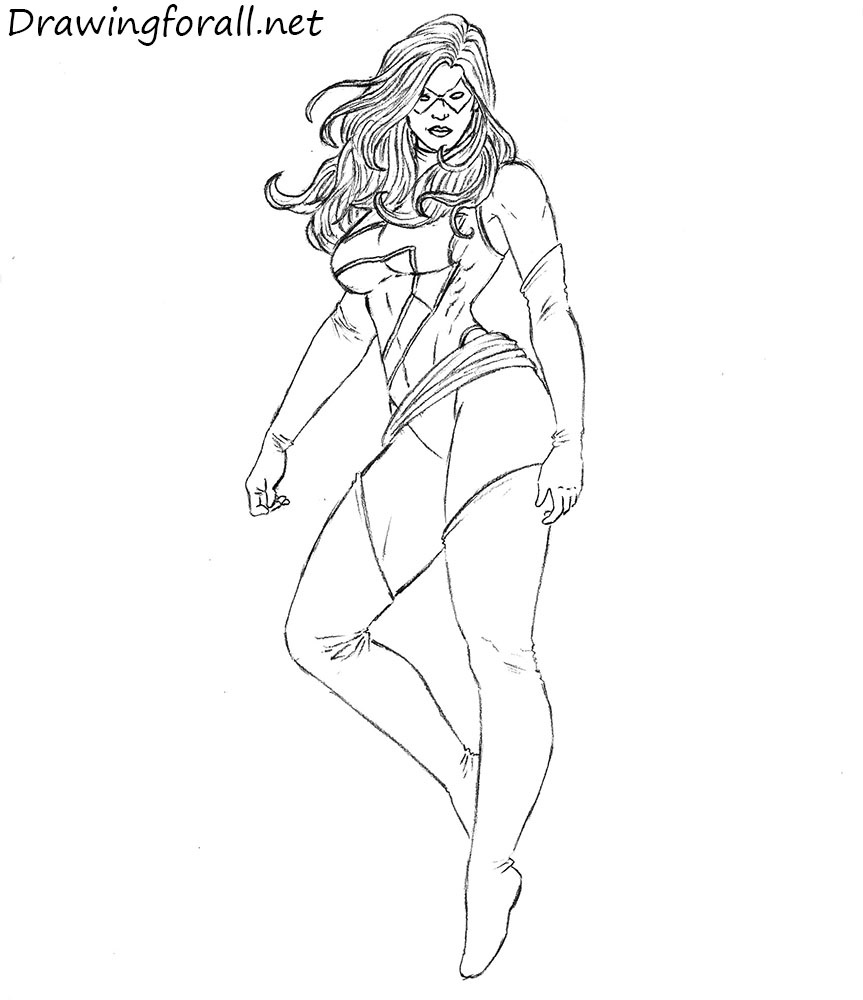 We conclude the lesson by drawing the edge of belt that hangs down, reaching up to the knee. We advise you to first draw the outline of belt, then divide it into several pieces, and then add uneven stripes.