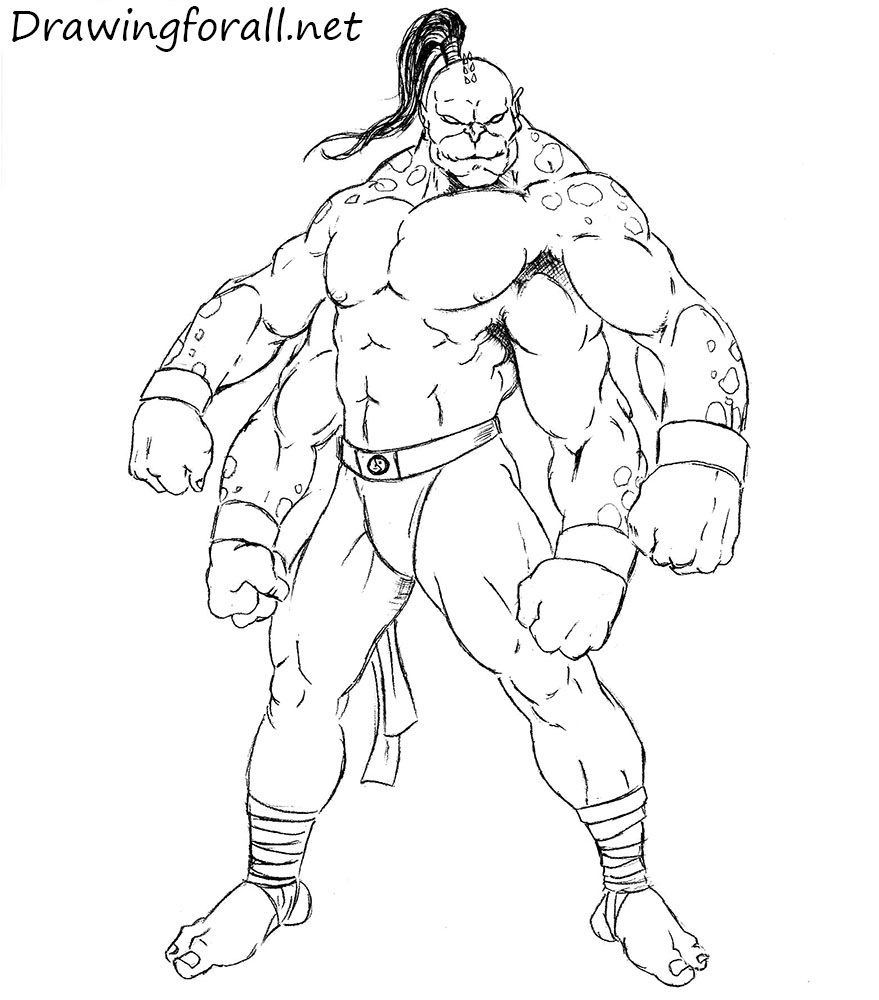 Hello! Today, we have prepared a new drawing lesson about the Mortal Kombat universe. In this drawing lesson Drawingforall.net will show you how to draw Goro. Goro – a representative of the race of half-dragons, called “shokan”. Shokans – an ancient race of Outworld. They are aggressive creatures with combat skills. The growth of medium Shokan is 250 cm and weight can exceed 1000 kg. Goro appeared in the first Mortal Kombat game, and was remembered all the players as one of the most brutal and horrible bosses in the game. Let’s learn how to draw Goro!

A bit about the proportions. Goro has several structural features of the figure – Goro has four hands, his head is disproportionately small, and he has huge trapezoid muscles and limbs.

Features of the limbs are also evident – incredibly huge fists, the palms have just three fingers, and on his feet he has only two fingers (recalls Ninja Turtles). But note – it is the second, the second pair of hands makes our monster so unusual. If not for this physical feature, his figure could be mistaken for a mighty body of the athlete.

First we draw the guide of the head, using a circle, and sketch out the body (skeleton) using simple lines. 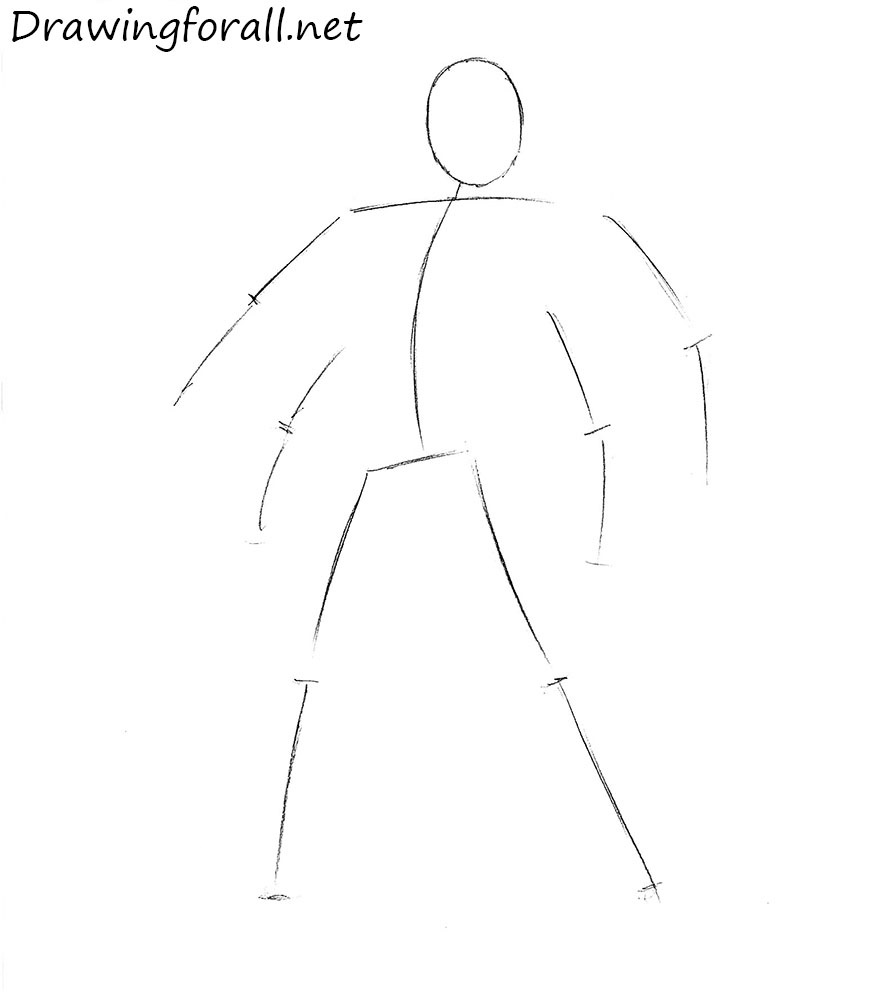 In the second step add the massive volume to the figure, we will create a visible silhouette based on stickman lines, but before that mark up the head. Draw the vertical line of symmetry of the face, which will divide the face into two equal parts and then draw three horizontal lines, which will denote the eyes, nose and mouth, respectively. We also note another feature of the face – a very small distance between the eyes and the nose line. Here we outline the tuft of hair on the head of Goro.

Outline the contours of the arms. The arms consist of several parts:

Next draw the torso – draw it using the lines of stickman. Do not lose the shapes of the body – it narrows sharply downward and extended to the side of the neck. This is due to the broad chest muscles, and a narrow waist. Using a triangular shape draw the groin area. Sketch out the legs using cylinders. 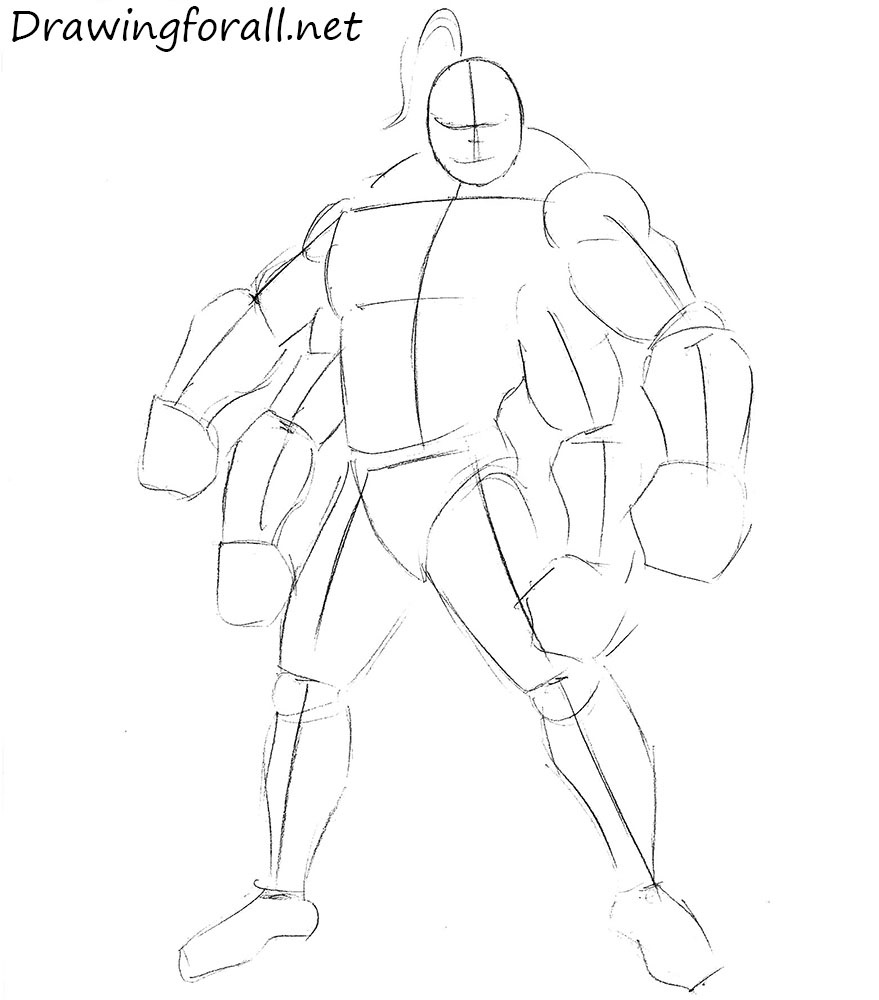 Silhouette is ready, start a detailed drawing of our Goro. We will do it a top-down, from head to feet. That is, now we are going to work on the face of a monster. Using the guidelines from the previous step draw low, overhanging eyebrows, very short nose, and contours of large, fleshy lower lip.

Here we note the nasolabial folds that run from the nose down. Sketch out the contours of the ears – they will be somewhat longer than the human ear. Also, the ears are pointed shaped, like a fairy-tale characters, but we’ll work on this in the next step. 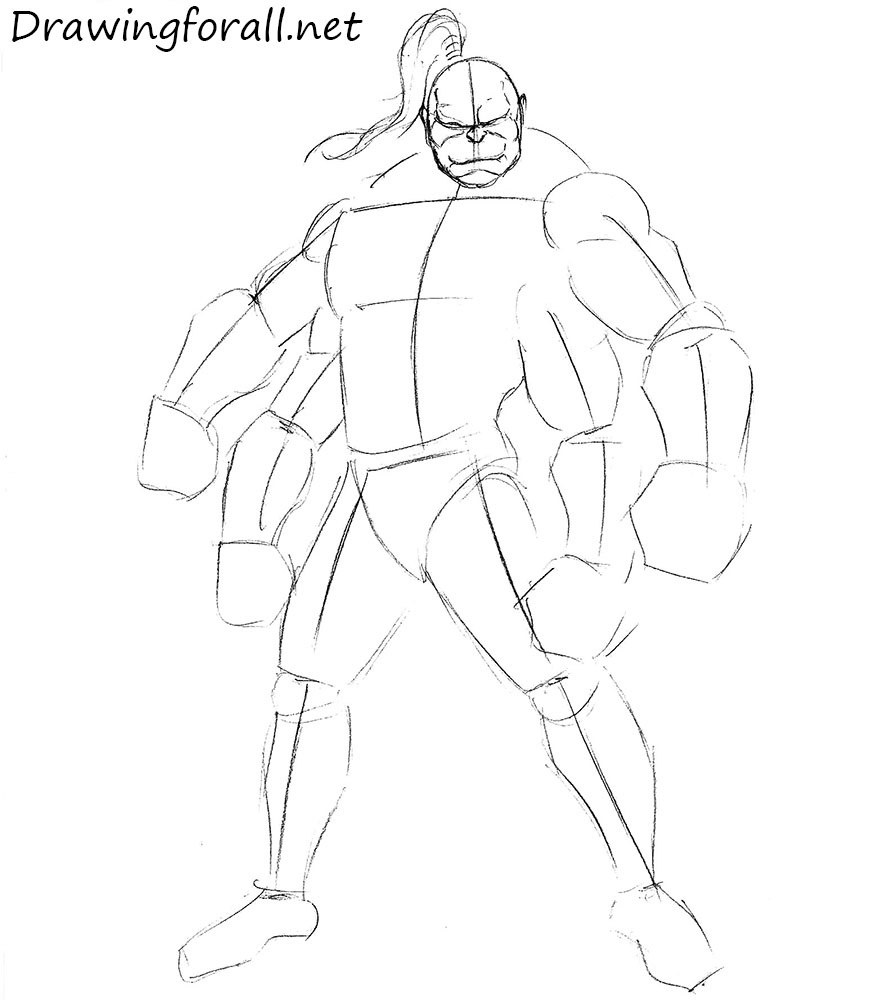 Draw the final details of the face. Erase extra guidelines, draw the protruding and wide cheekbones and cheeks. Draw a tuft of hair on the head of Goro. And if you draw long hair, there is one rule that is equally relevant for drawing fragile girl and not very fragile monster – long hair is always drawn in the direction from the roots to the tips. Do not forget the small spikes that are at the center of the skull. 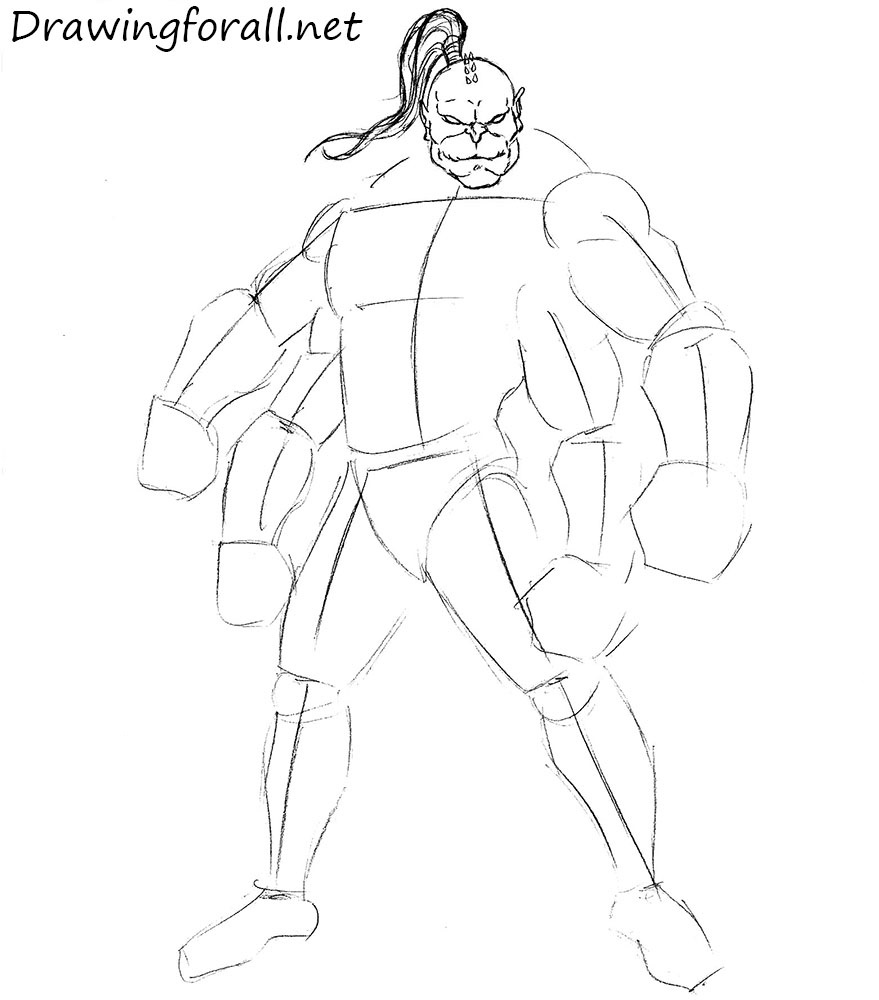 We outline the muscles of the torso. Note, that this step is very difficult, so first we will do only the outlines, slightly pressing the pencil.

The largest and most massive muscles – chest, just below them are the muscles of the crust, ie abdominal muscles, the notorious “cubes”, and the lines of obliques muscles. 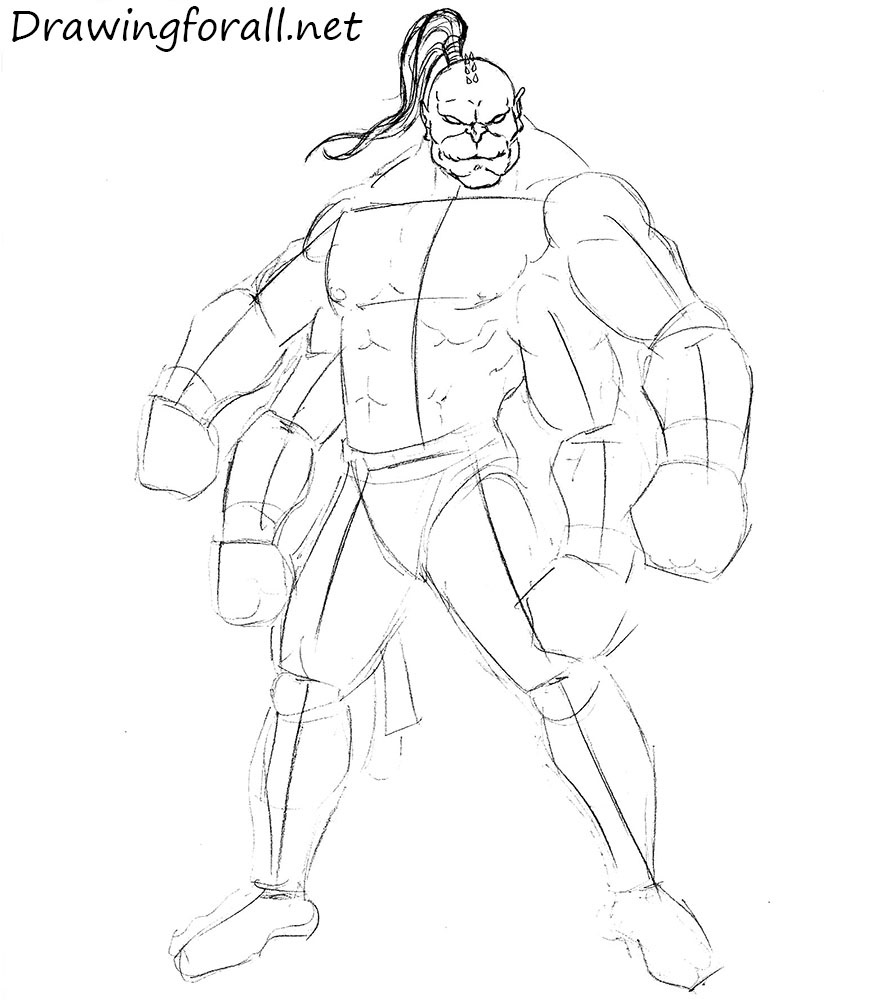 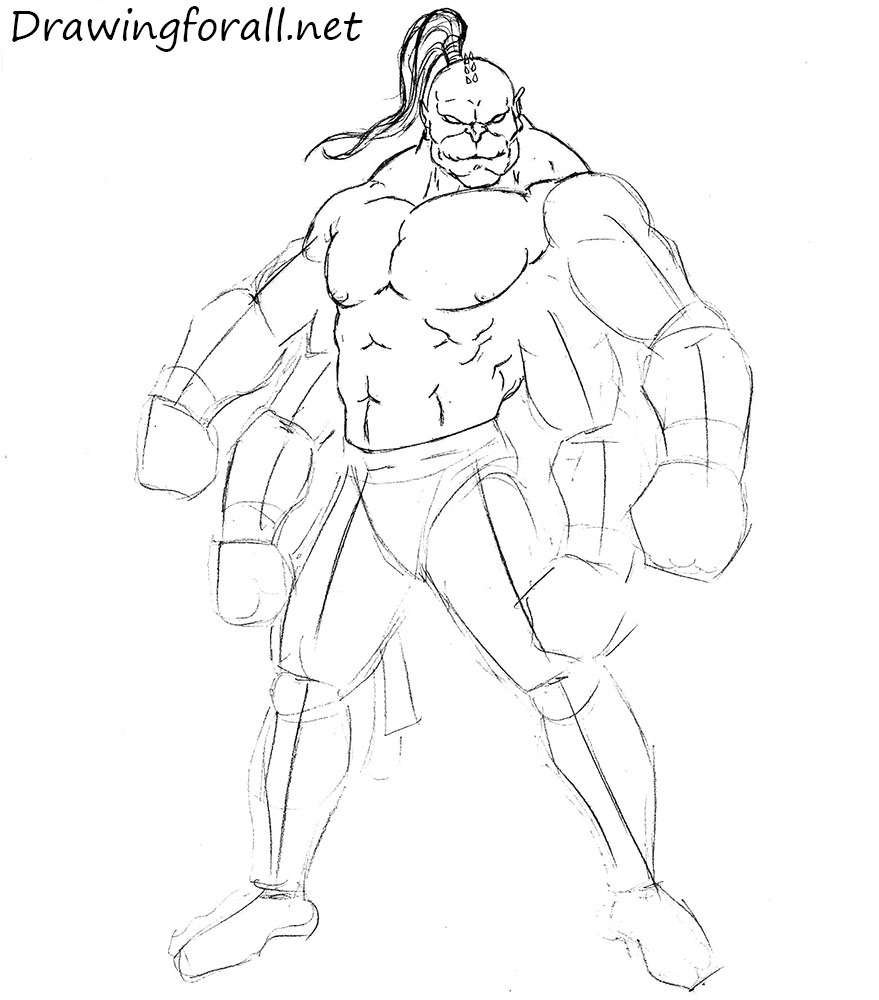 Draw the top pair of arms. Here, we need to know the main muscles of arms, we talked about them in the second step of our drawing lesson, namely the biceps, triceps and deltoid. Notice how bright and noticeably looks rounded biceps on the right hand from us. Triceps is almost invisible due to reversal of the arm, but in fact, it is the largest muscle of the arm.

Note the interesting point – the forearms look wider than the shoulders themselves, it is especially noticeable on the right arms from us. Do not forget to draw a wide bracelets on the wrists. 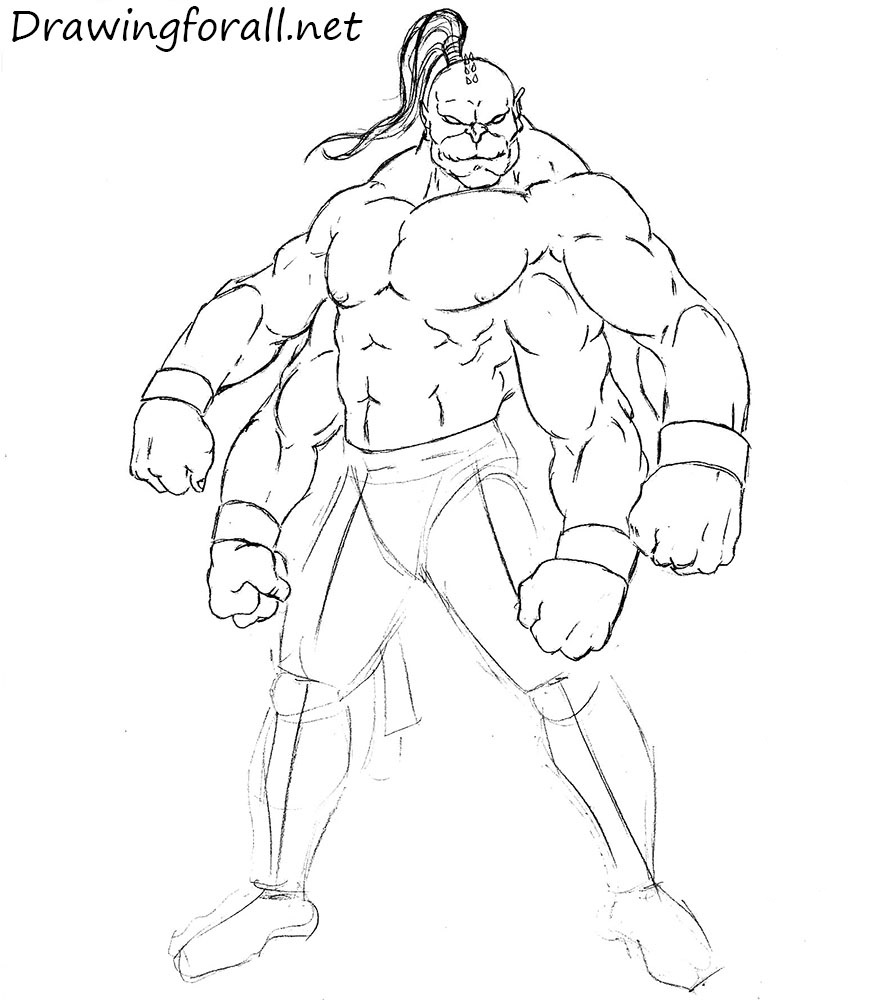 Draw the groin and right leg from us. Do not forget to mark the yin yang symbol on belt . Draw the thigh muscle – pay special attention to the line of the muscles  passing through the entire area of the thigh.

Draw the knee and lines of calf muscle. Using a series of horizontal lines, draw strips of fabric on the lower leg shin. Also draw the feet (note – one finger is slightly larger than the second). 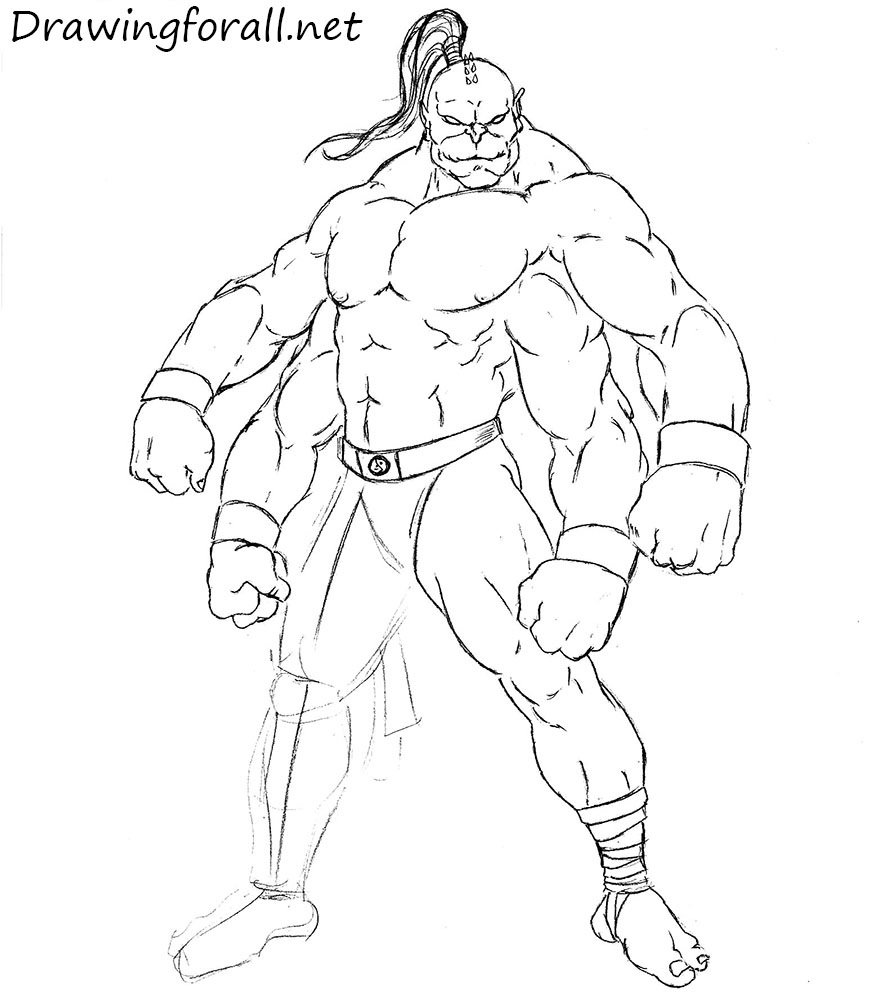 Draw the groin area and left leg from us, by analogy with the previous step. Make the hair on the head thicker and darker. Add shadows to the areas of the right underarm and neck. Draw spots, which are located on the forearms, and shoulders of Goro. 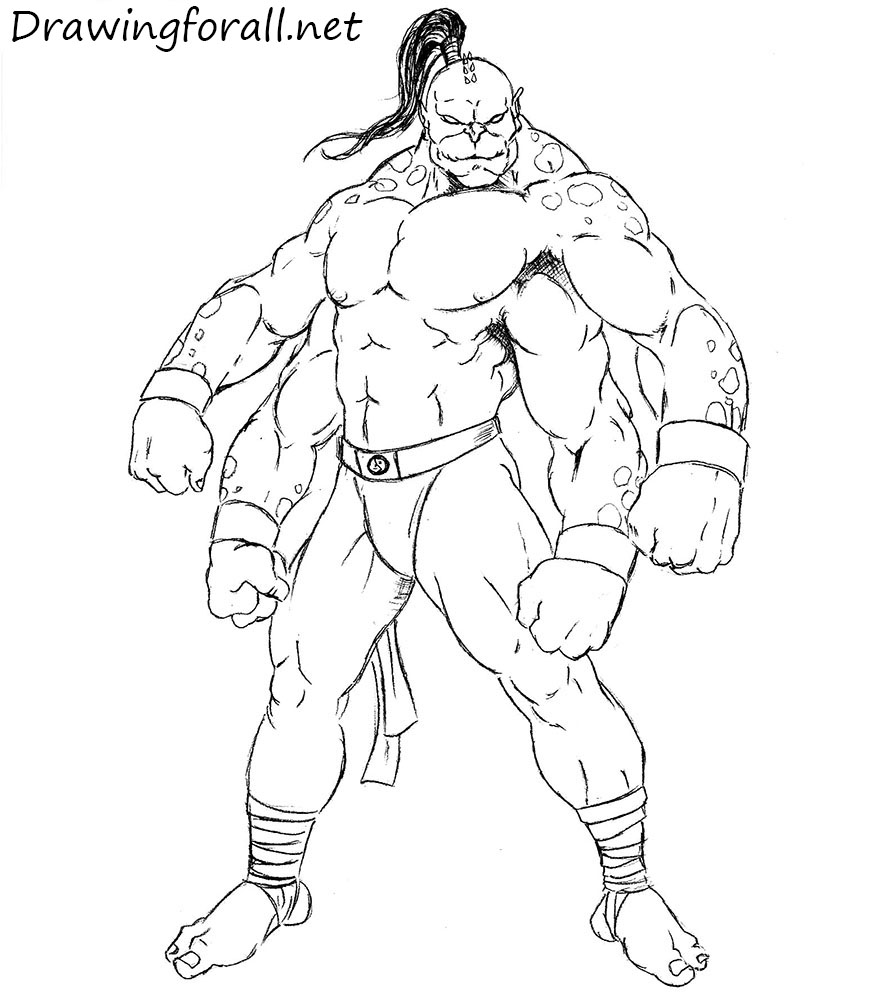 The drawing lesson on how to draw Goro is over now. If you like terrible and infernal villains, we advise to view the article on how to draw Darth Vader, Venom and Joker. Subscribe to our updates and stay with us!