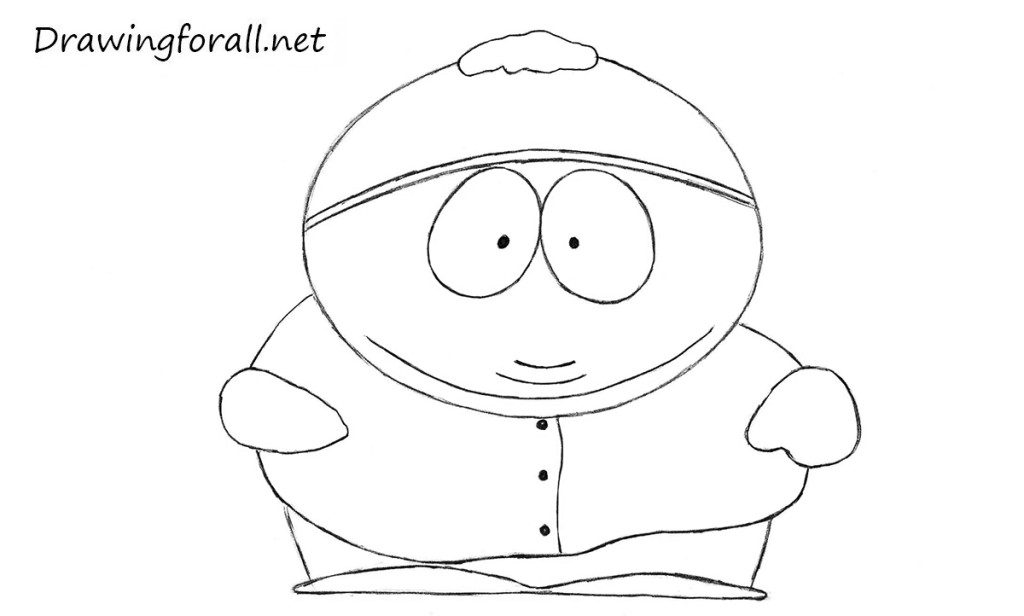 Hello everybody! Today we’ll show you how to draw Eric Cartman! In general, all the characters of South Park are drawn very simplistic and disproportionately. And Eric Cartman is no exception. So, let’s start the tutorial!

First draw Eric Cartman’s head as an oval. But before you start drawing, we would like to remind you that in the first steps do not need to press too hard on the pencil so that later could be easy to erase all guidelines. 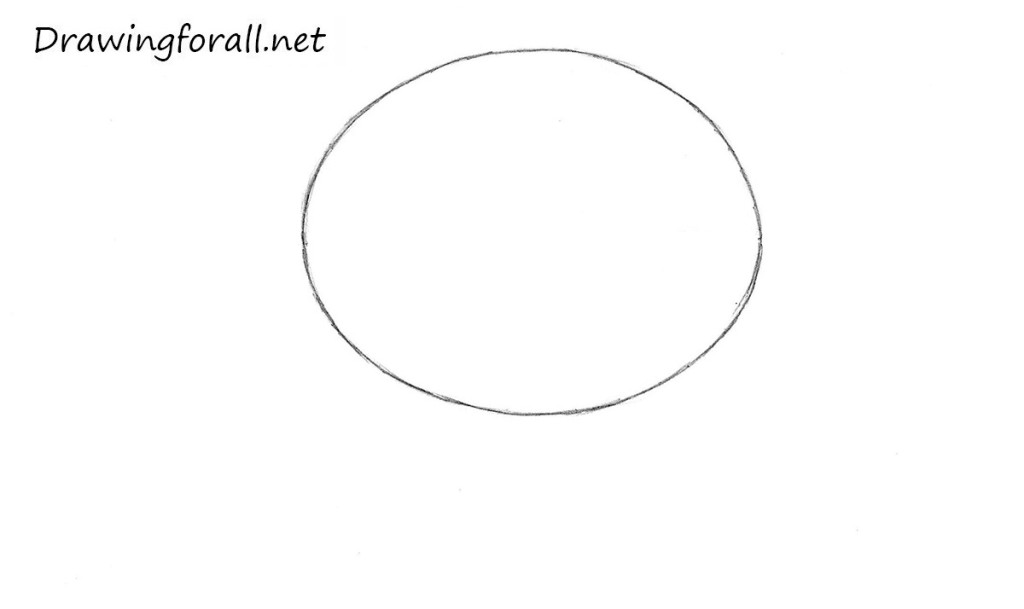 Draw a vertical line of facial symmetry and the horizontal line of the eyes. So we conventionally divided the head into four parts. It should be noted that these two lines must be strictly perpendicular, and they should converge exactly in the middle of the face. 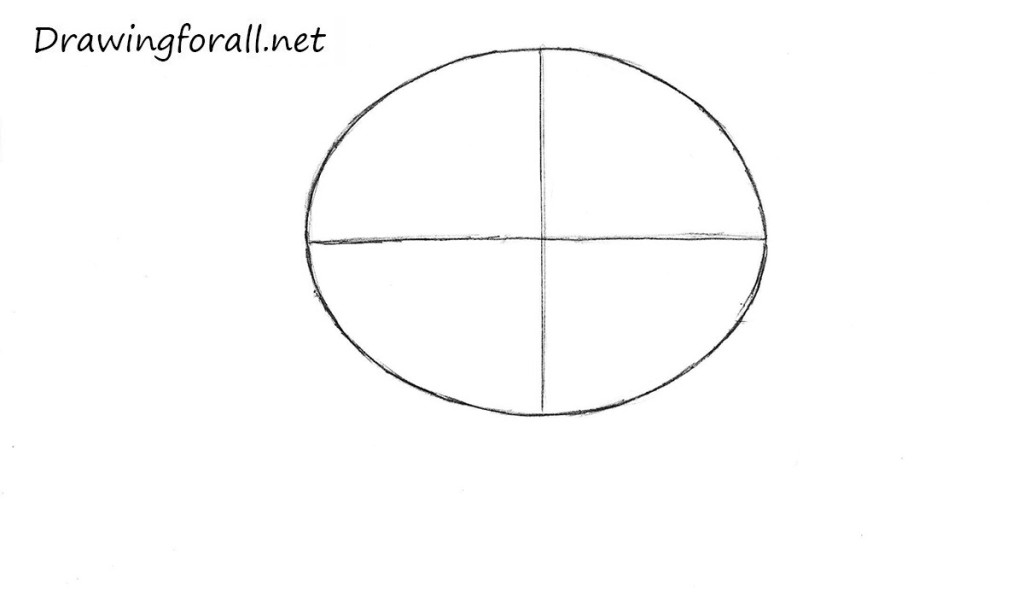 In this step, we draw a body of Cartman. It should be similar to the bag and should be slightly wider and shorter than the head. 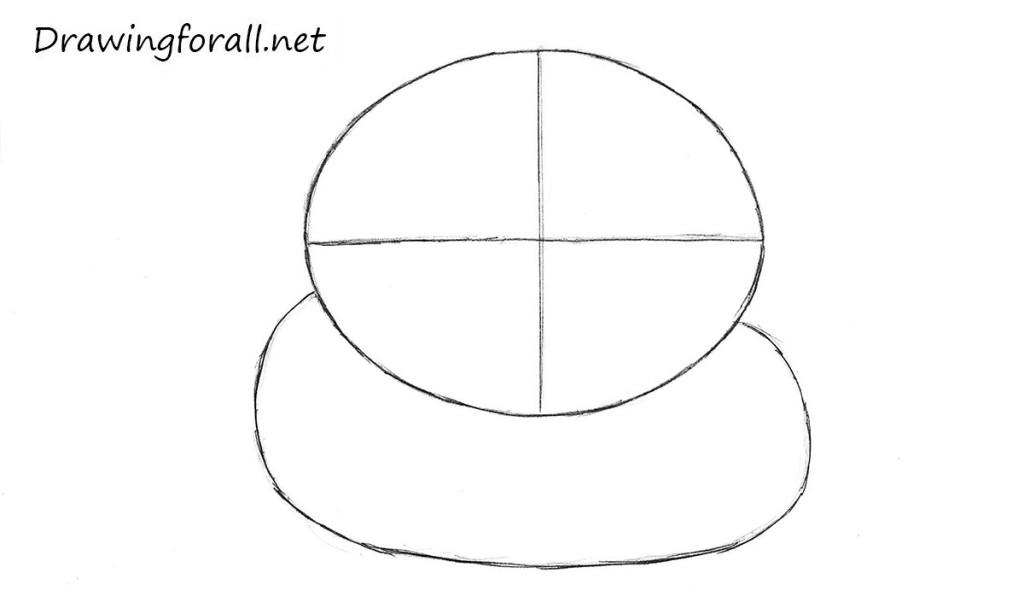 Well, now we draw Cartman’s legs. Draw it as in our example and move to the step five. 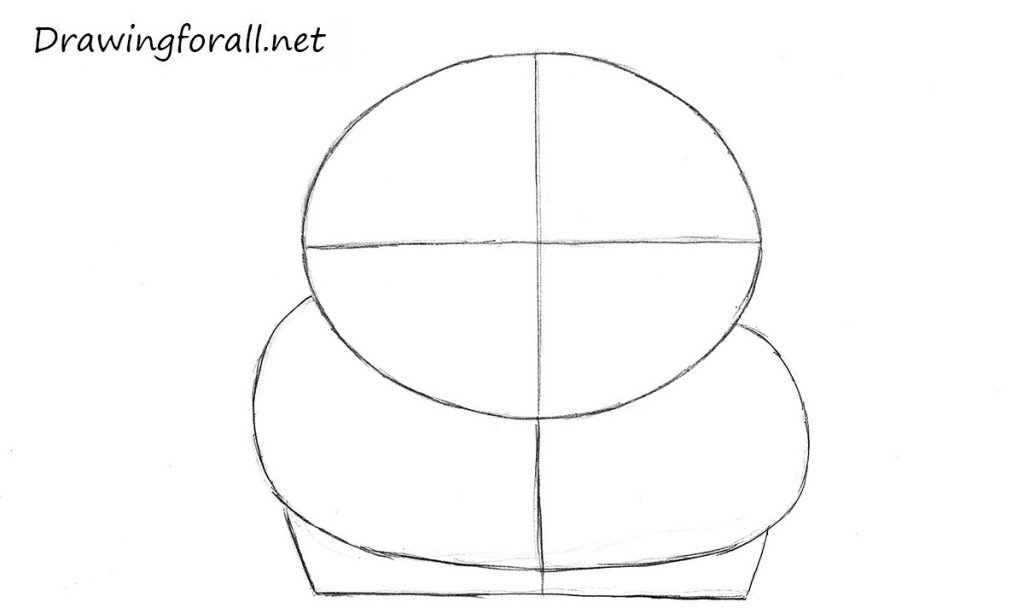 The base is finished. Now it’s time for the details. Draw a pompom on the top of the head. Draw two perpendicular line as an arc, that starts slightly above the eye line. The hat is ready, and we move on to the next step. 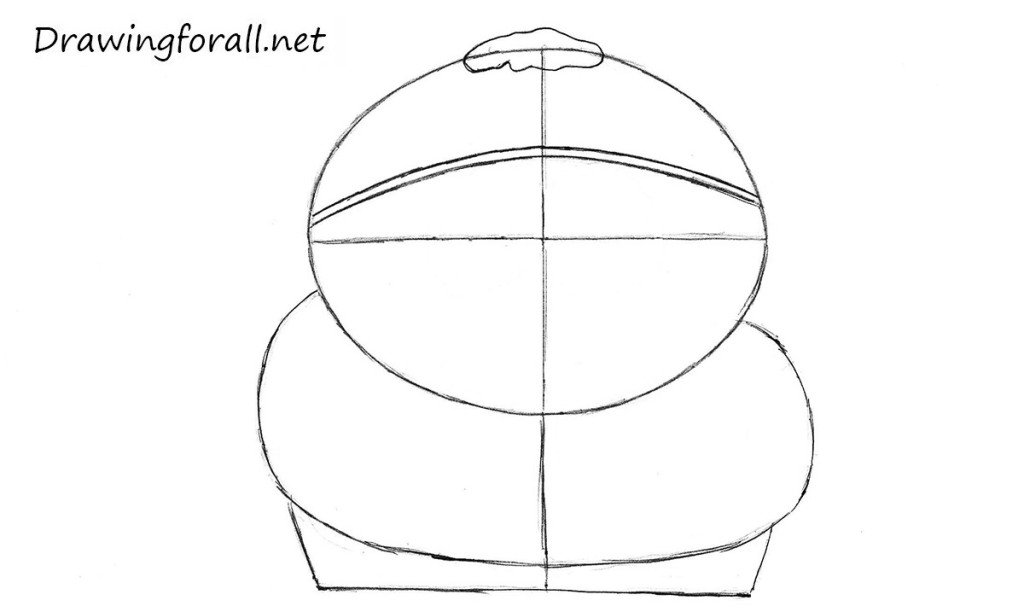 In this step we draw the Cartman’s eyes. In the South Park eyes are drawn by two ovals. On  top they should almost tangent to the line of the hat and tangent to each other along the vertical axis of symmetry. 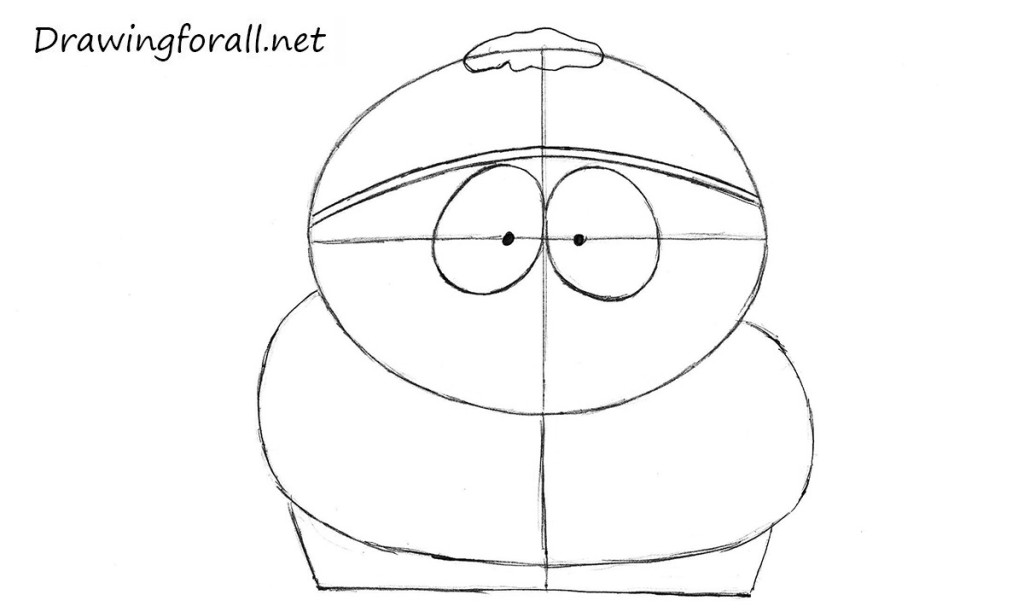 It’s probably the easiest step in this tutorial about how to draw Eric Cartman. Just draw the mouth by a curved line and move to the next step. 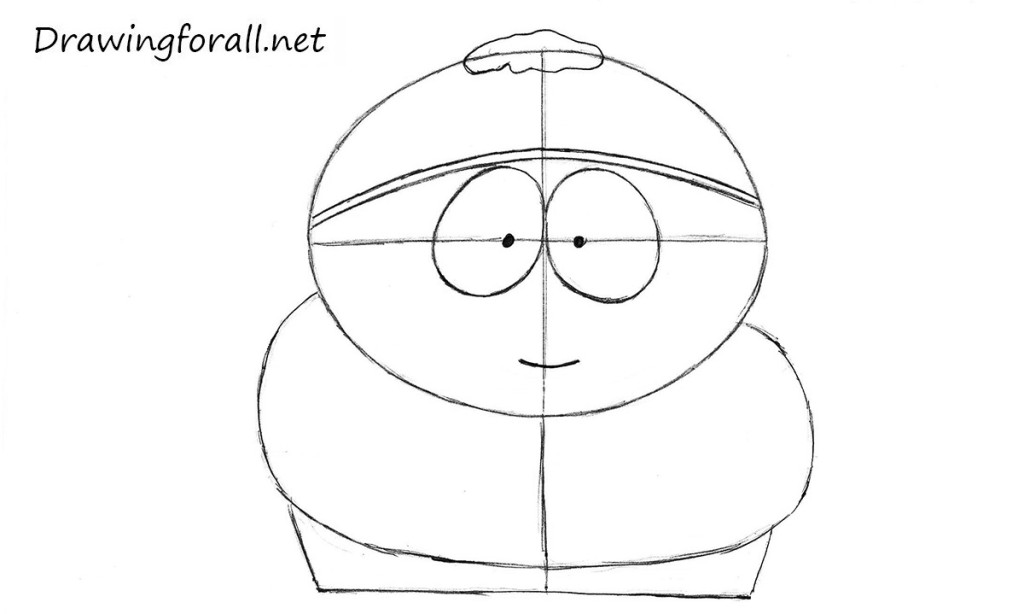 And another one easy step. Just draw Eric Cartman’s chin in the form of another two curved lines slightly lower than the line of the mouth. 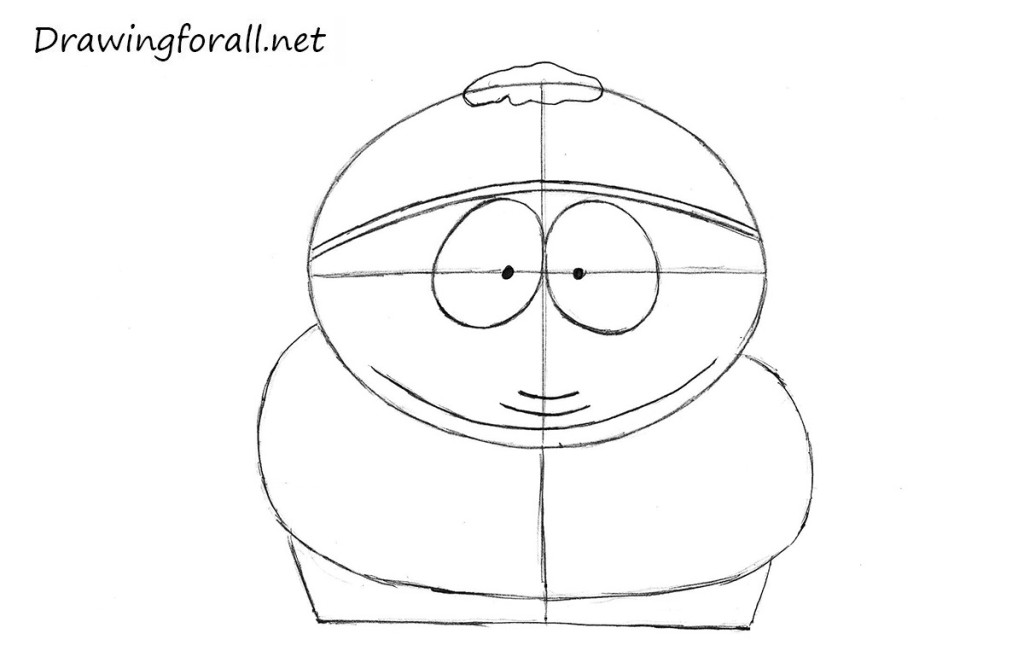 Well, we are at the finish line. In this step, we draw Cartman’s mittens in the form of two small clumps on the sides of the torso. 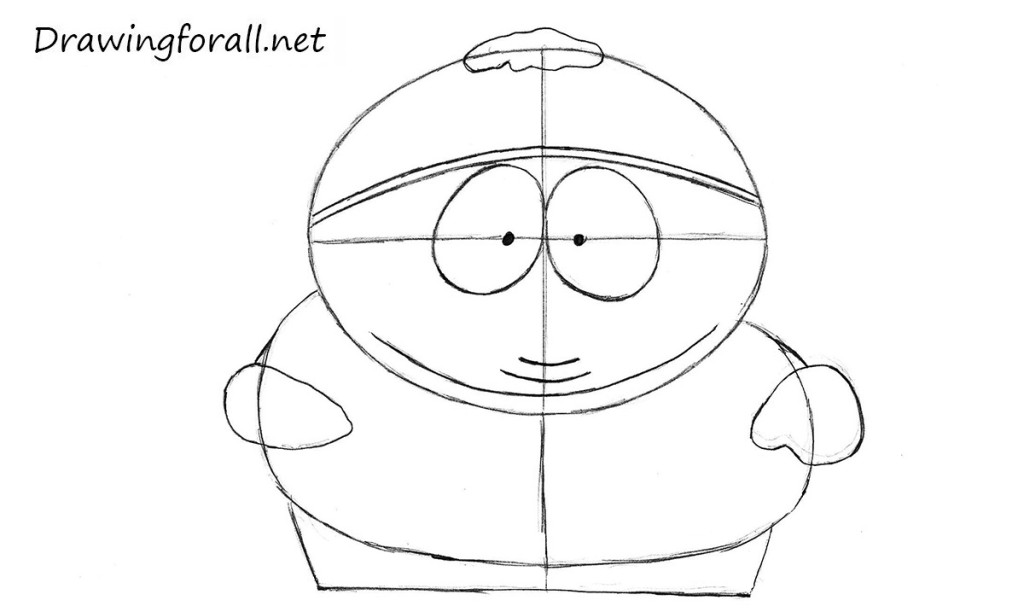 Another small step in which we draw Cartman’s shoes and by using a pair of wavy lines we draw the zipper of the jacket. These details should be as simple as possible. 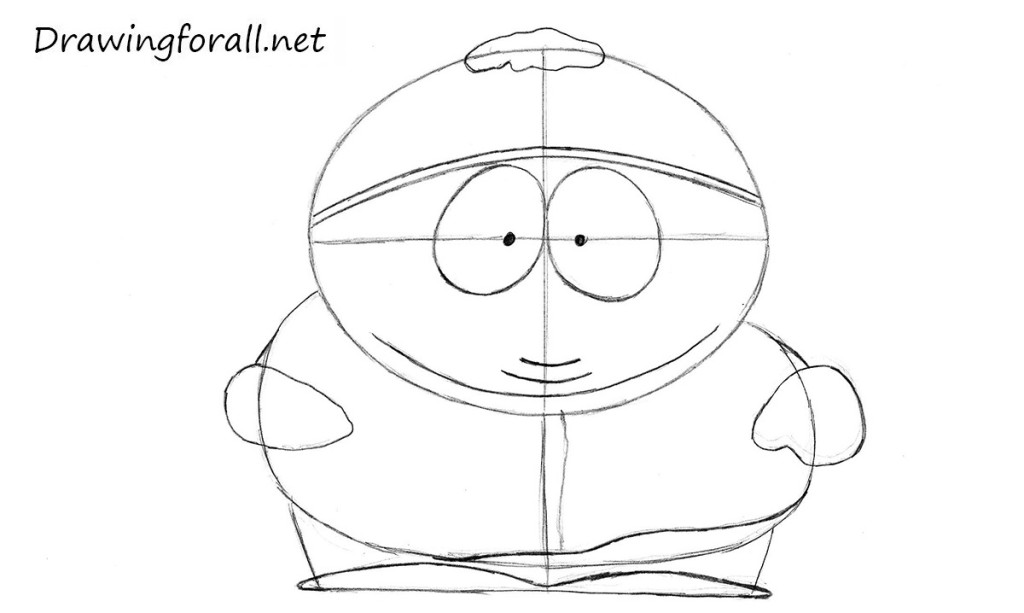 And in the last step we erase all guidelines and draw three buttons on the jacket. Make the lines of the South Park character drawing clear and dark, as in our example. Eric Cartman drawing is ready!

It was the drawing instruction on how to draw Eric Cartman step by step. We hope you enjoyed this tutorial. We love South Park very much and we want our readers to be able to draw all the characters from this legendary satirical series. To see all the other lessons on this topic and about characters from other animated series, visit our category called “Cartoons”. Stay tuned, we have so much interesting for you!