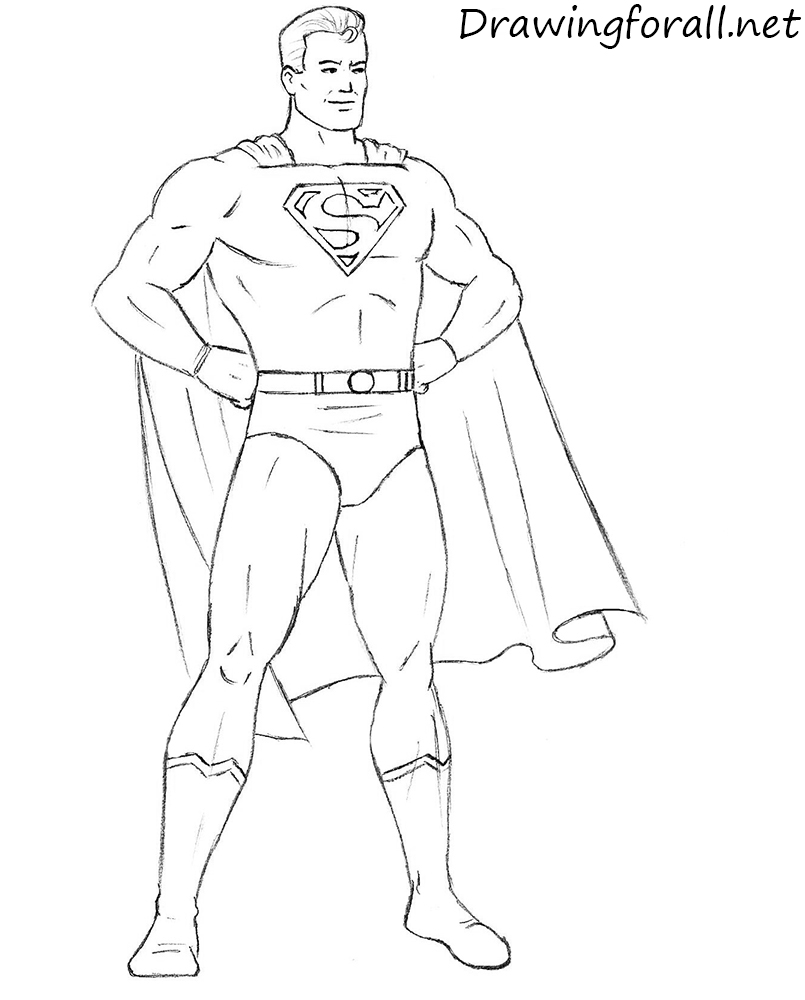 Hello! Today’s lesson drawing lesson we decided to dedicate to Superman – the legendary superhero from the DC Universe. Superman first appeared in the pages of comic books back in 1938.

Superman is one of the most famous superheroes, along with Spider-Man. So, let’s begin the drawing lesson, and learn how to draw classic Superman!

At first let’s sketch out the skeleton of Superman. This figure will show us the main proportions, pose and position on the paper. Using an oval draw the head. Draw the neck and spine. The height of the spine is the sum of the two heights of the head. Using a horizontal line draw the line of shoulders. Note, that the shoulders of Superman should be extremely wide. Draw the guidelines for the arms and legs, as in our example. The height of the legs is four heights of the head. 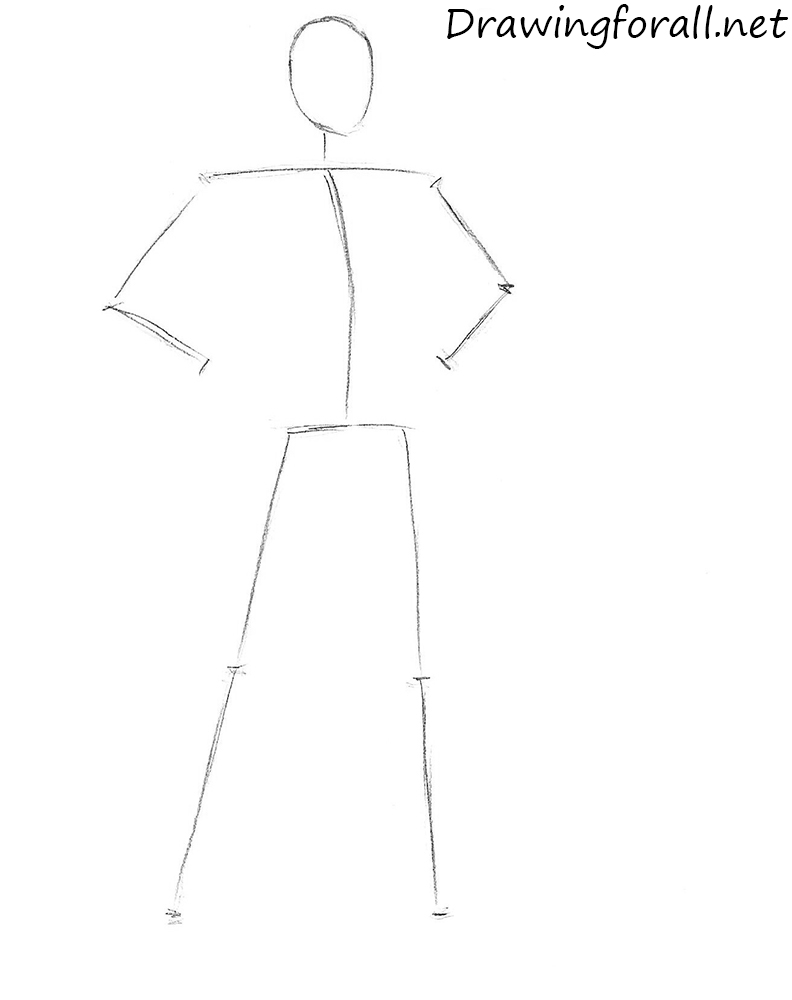 Draw the lines of facial symmetry. Mark the head by two perpendicular lines – a vertical line of symmetry of the face and the horizontal line as a guideline for the eyes. Please note that the location of the vertical line shows us a reversal of the head sideways. Using a short cylinder draw the neck. Sketch out the torso, as in the example below. Draw the shoulders and elbows, using circles. Draw the arms, which consist of two equal cylinders. 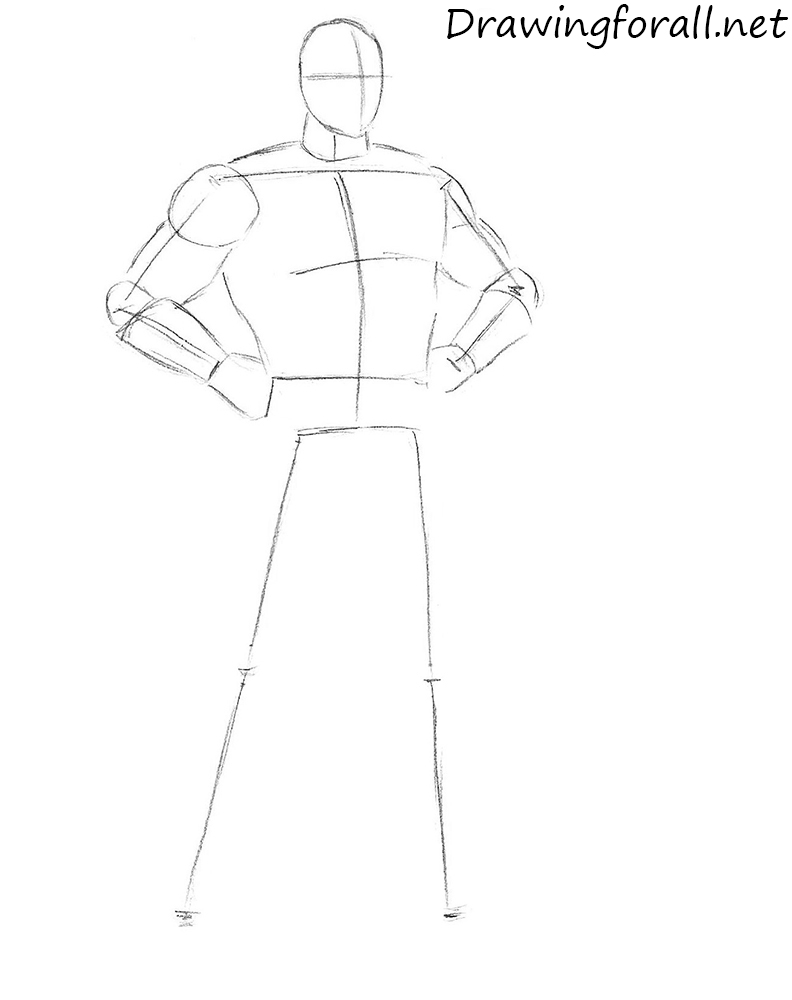 Continue the drawing lesson about how to draw classic Superman. At this step we will work with the lower body of Superman. As in the previous step, we will draw the parts of the body by simple geometric shapes. Draw the triangular pelvis as in our example. Using cylinders draw the legs. Sketch out the knees and feet. The general shapes are ready! 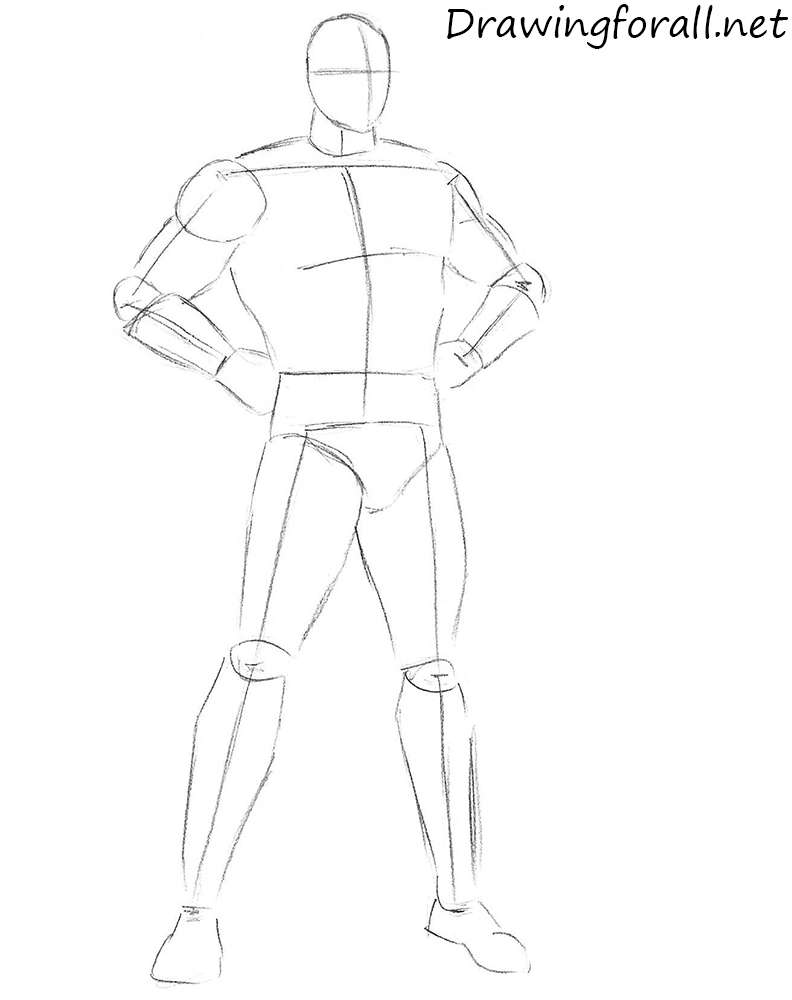 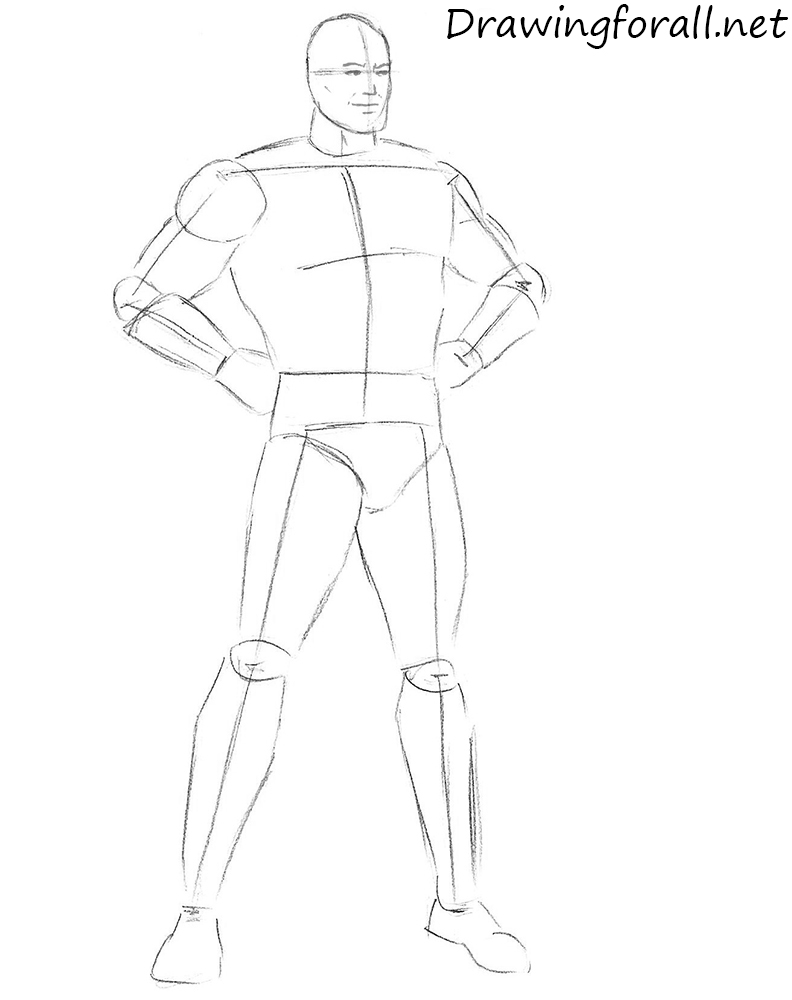 Continue drawing the head of Superman. Draw the ear. The upper edge of the ear is level with the eyebrows, the lower edge is level with the tip of the nose. Draw the line of hair. Using short curved lines draw the slicked back hair. Erase the guidelines and circle the lines to make them smooth and clean. Draw the neck and upper part of the cape. Sketch out the cape, as in our example. 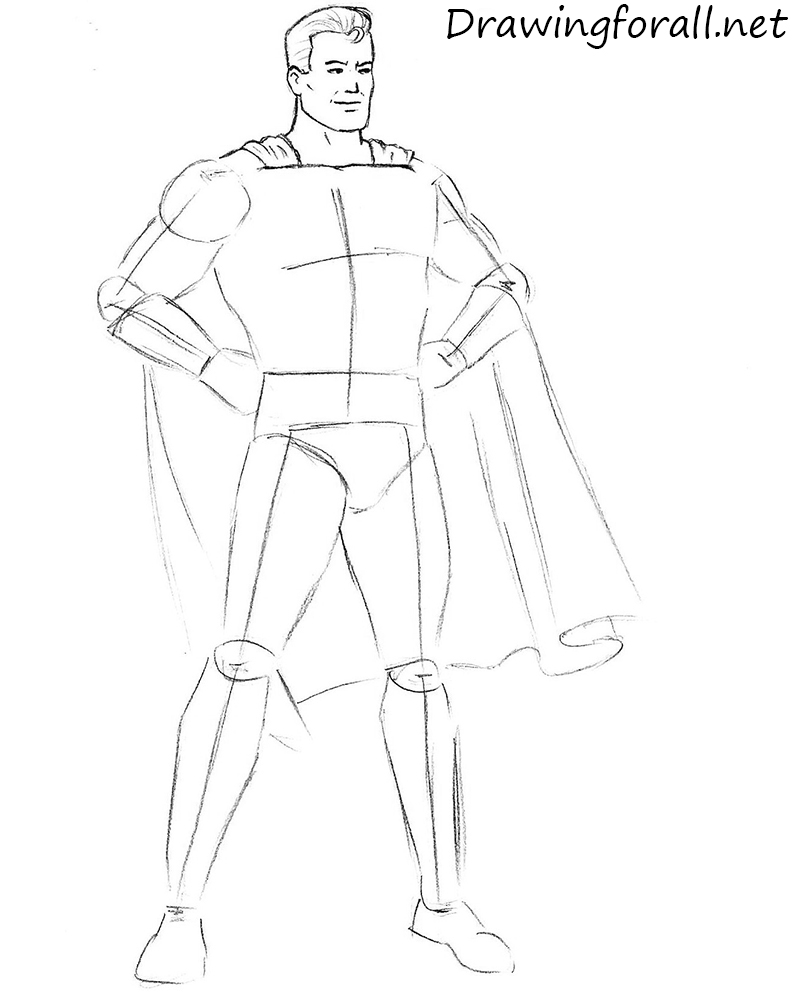 Ok, let’s draw the torso of Superman. Erase the extra lines from the previous steps and draw the powerful pecs and the famous logo with the letter S in the center. Using three lines, draw the abdominal muscles. 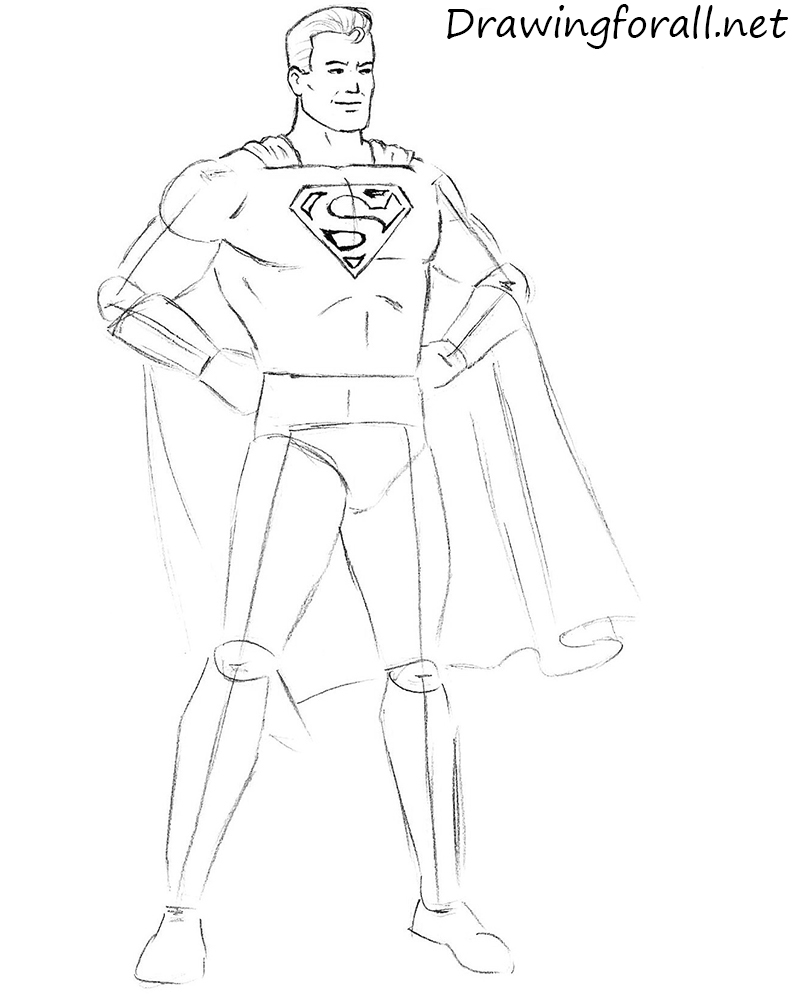 In this step, of the tutorial on how to draw Superman we will draw the arms. Erase the guidelines from the previous steps. Then on the place of the circles draw the massive deltoids, which forms the outer contour of the shoulder. Just below draw the biceps (inner side of the upper arm) and triceps (outer). Then draw the forearms, which taper to the wrists. Draw the fists and lines of the suit, as in our example. 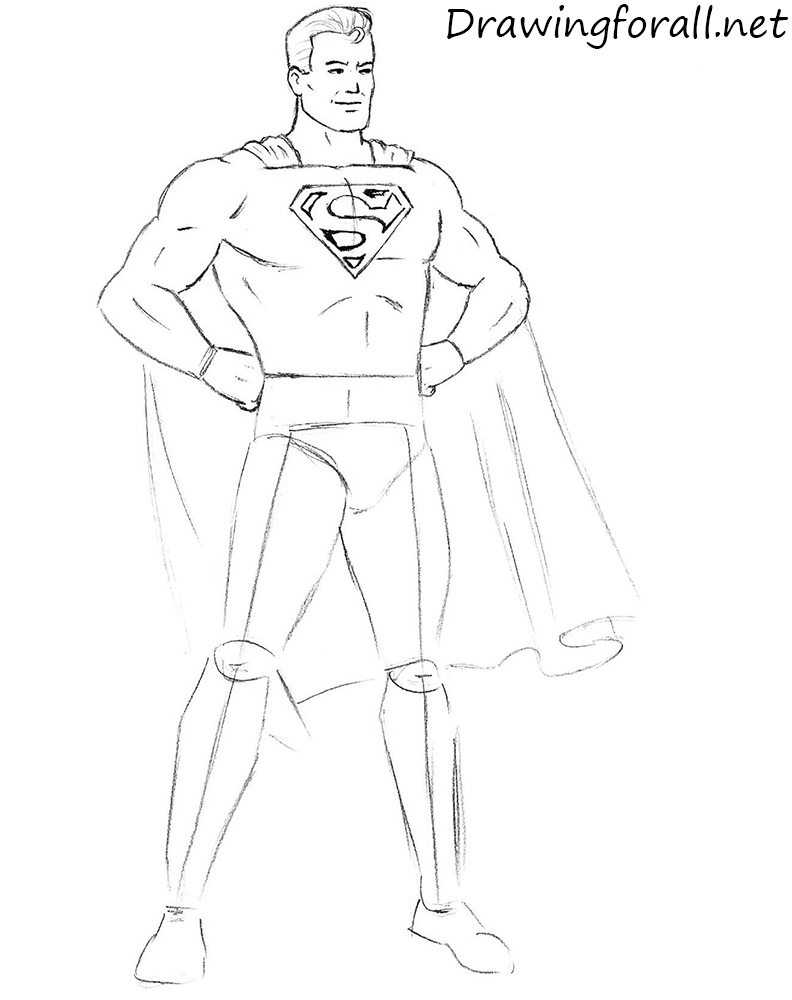 At this step, we work with the lower body of Superman. Erase the guidelines and unnecessary strokes from the pelvis and legs. Circle the lines, to make them smooth and clean, as in our drawing. Draw the lines of the muscles. 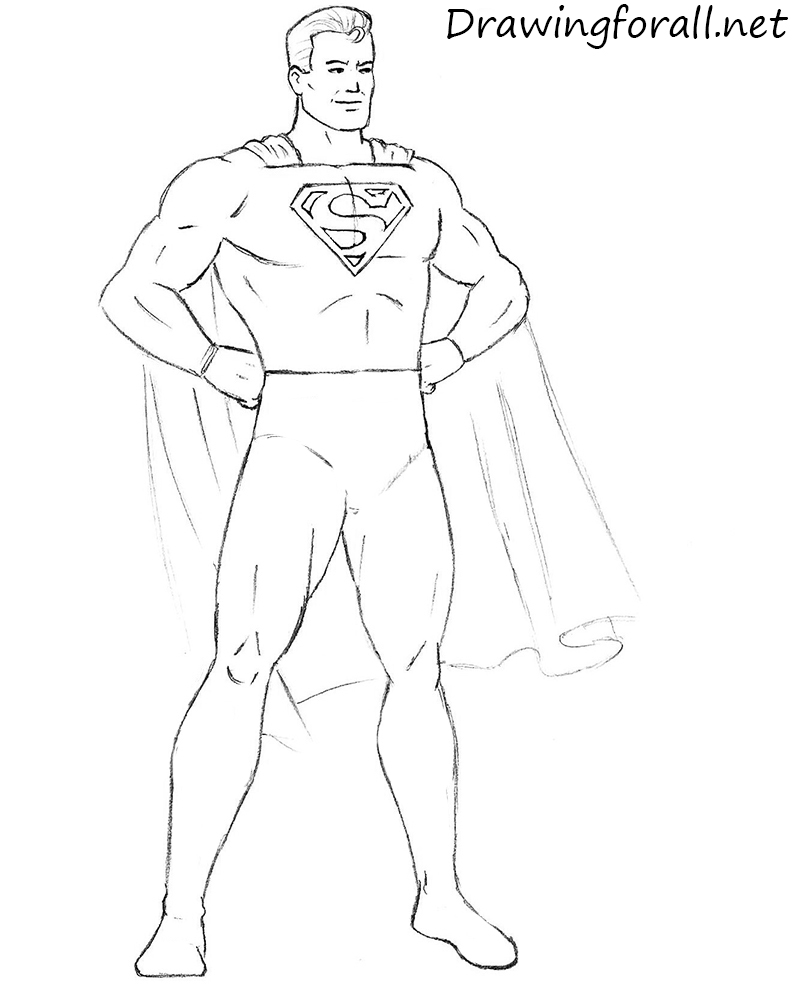 We are at the last step in the drawing lesson on how to draw Superman. Draw the belt as in our sample, and add some folds to the costume. Using two lines similar to the letter “M” draw the line of the shoes. Circle the lines of the cape, using the guides from the previous steps.

We hope, this drawing lesson helped you to learn how to draw classic Superman from DC Comics. Come to our site for new drawing lessons by Drawingforall.net.