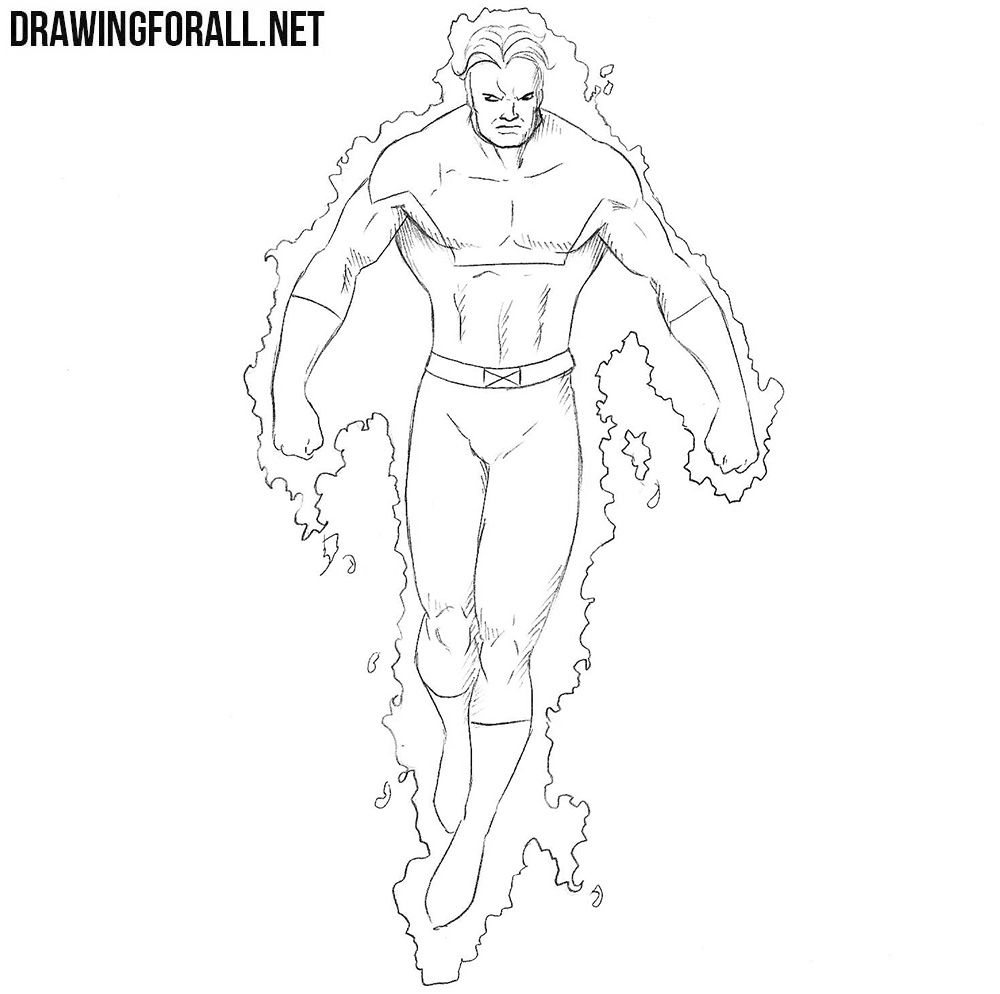 Vulcan is a character, comic book supervillain of Marvel Comics, first appeared on the pages of the X-Men: Deadly Genesis # 1 (January 2006). And in this drawing tutorial we will show you how to draw Vulcan from Marvel Comics.

By tradition, let’s start with the skeleton of our character. The skeleton, or “Stickman” should be drawn using extremely light lines. First of all, we sketch out the head and the line of the spine, on which we place the thorax and the pelvis. With the help of very light lines, we sketch out the arms and legs. By the way, to learn more about drawing the skeleton of the character, visit the lesson on how to draw Dr Manhattan. 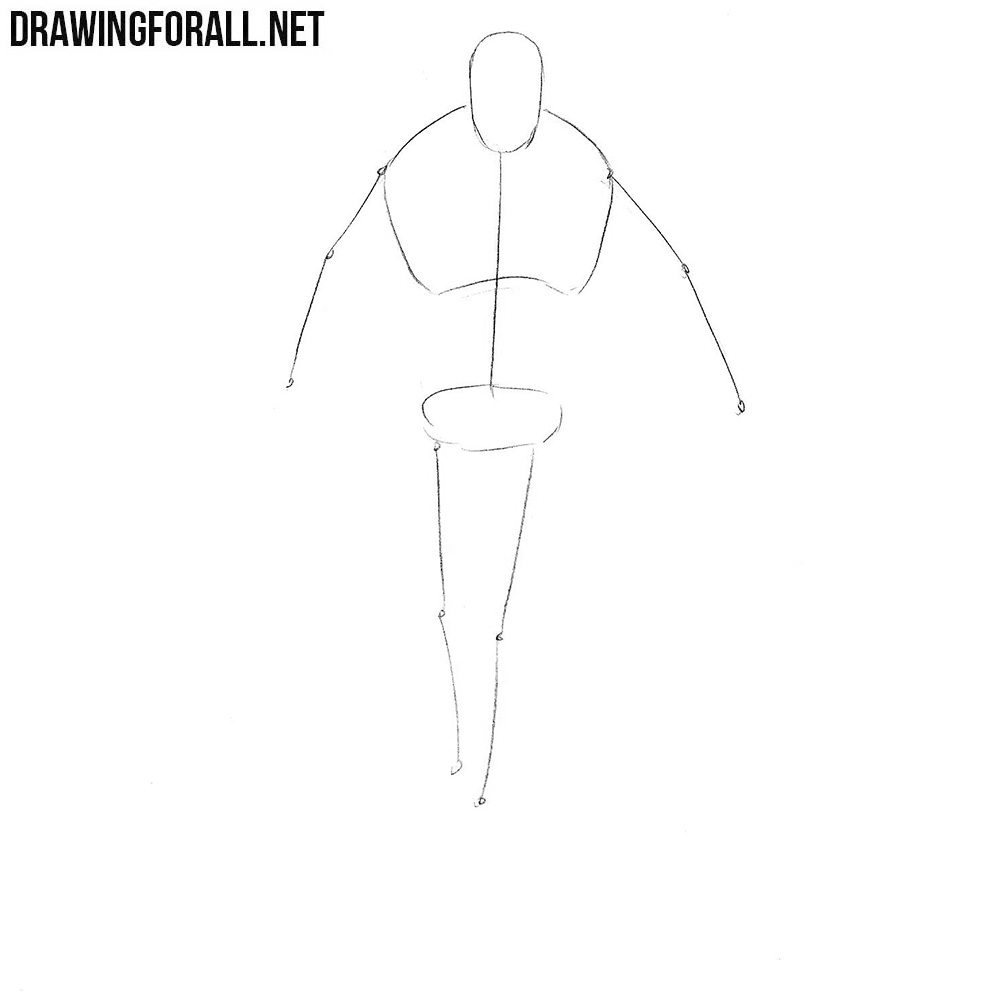 Now we sketch out two intersecting lines on the face, with which we will draw out the details of the face. Next, outline the shape of the torso, which expands in the shoulder area and narrows in the waist. Next, sketch out the outlines of arms and legs with very simple geometric shapes, as shown in our example. Note that this step should also be drawn with very light lines. 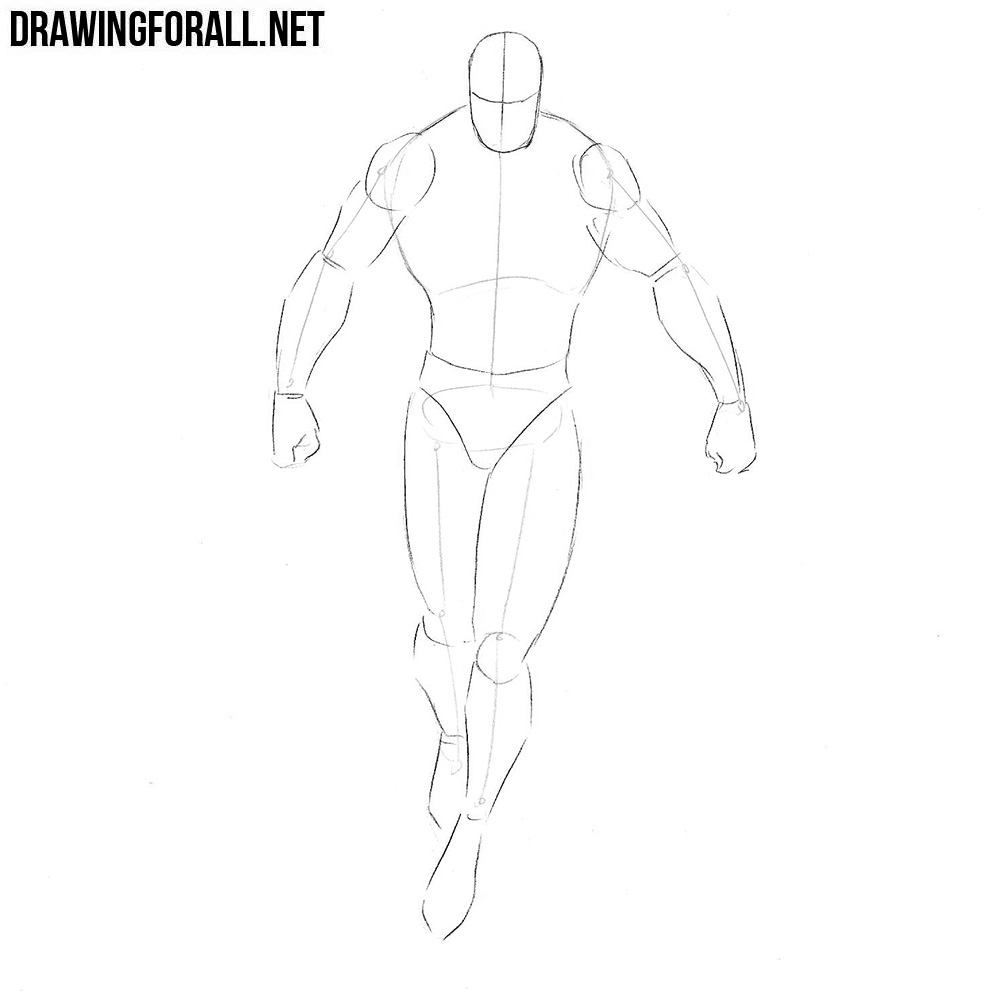 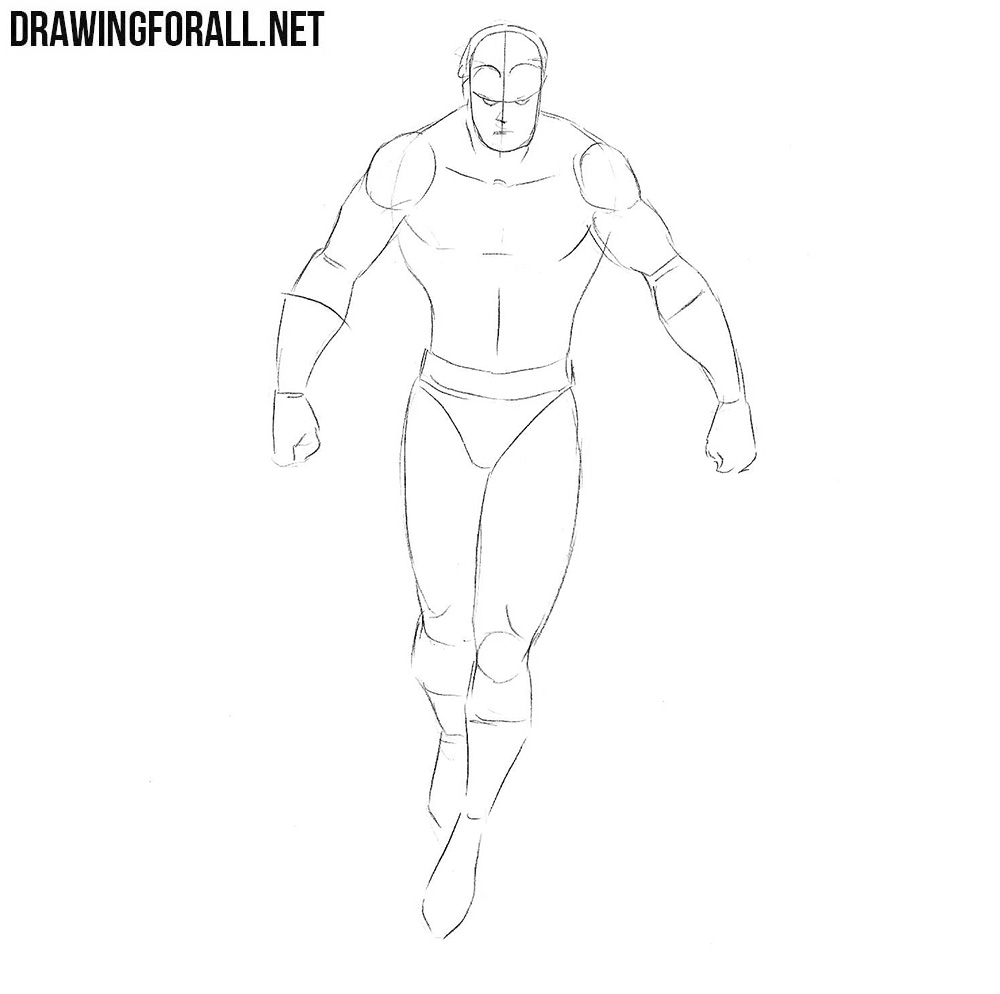 Starting with this step, we will work with the finish details. And by tradition, we’ll start with the head. With the help of clear and dark lines draw out the details of the face. Next, draw out the outlines of the hair and contours of the face. At the end of this step, remove all unnecessary guidelines from the head of Vulcan. 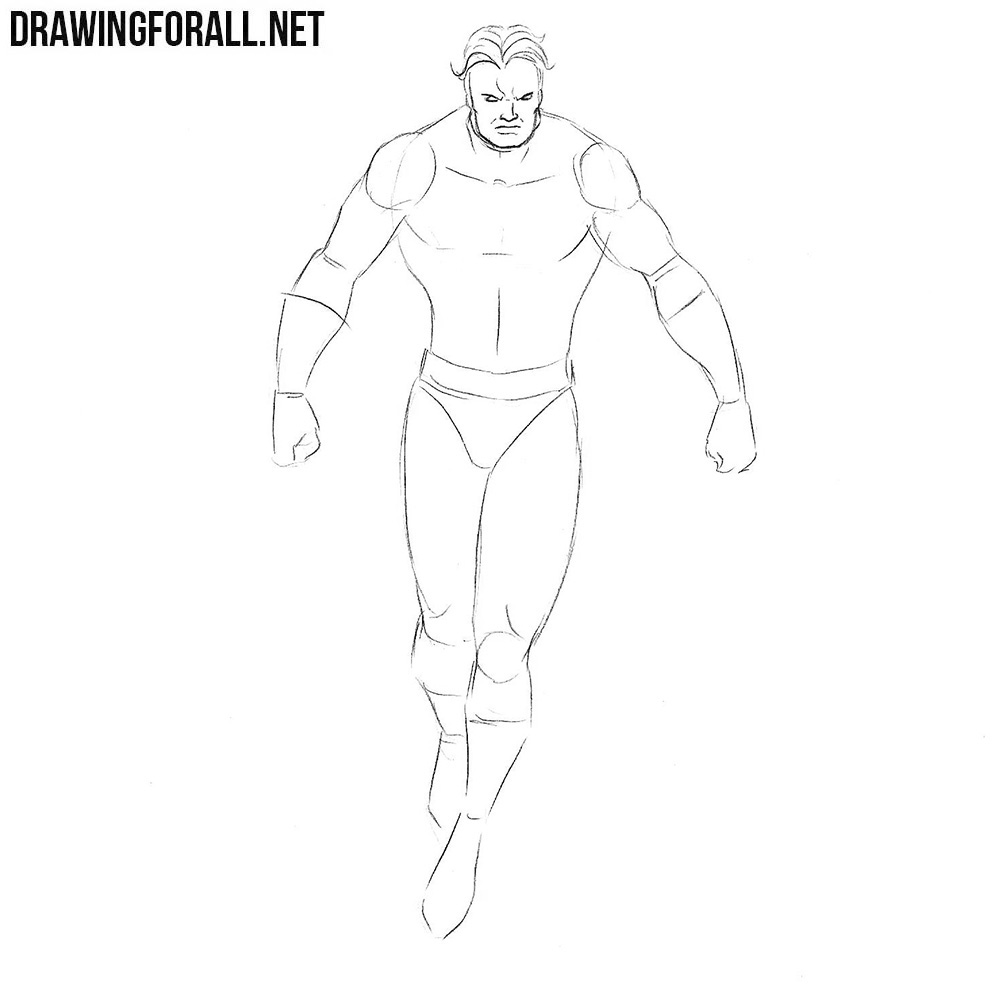 A simple enough step in which we will draw the details of the torso. So, using clear and dark lines draw out the shape of the torso, as shown in our example. Accurately draw pectoral muscles and abdominals. Next, draw lines of the costume on the torso and remove unnecessary guidelines. 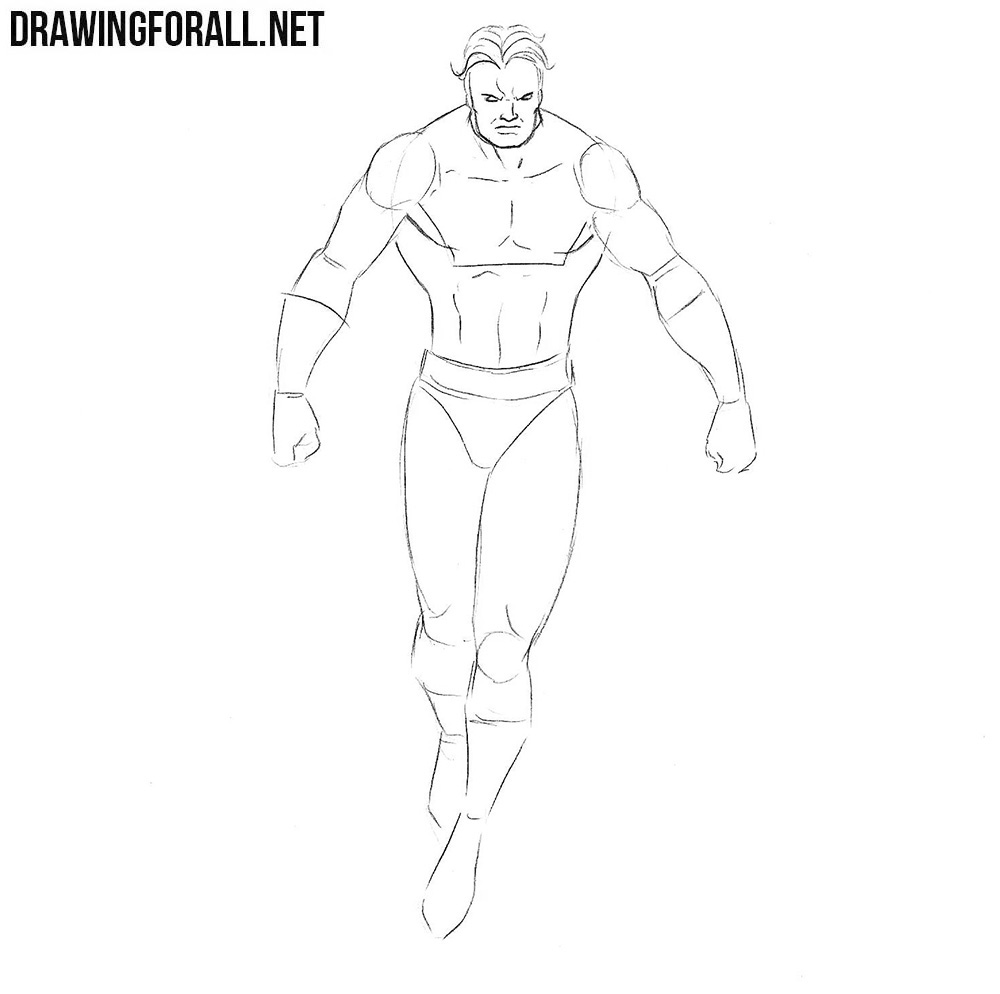 Now let’s move to the arms of our character. With the help of clear and smooth lines draw out the contours of the shoulders, biceps, triceps and muscles of the forearm. In the same step we draw out the lines of the clenched fists. At the end of the step, carefully draw the lines of gloves and remove all unnecessary guidelines from the arms. 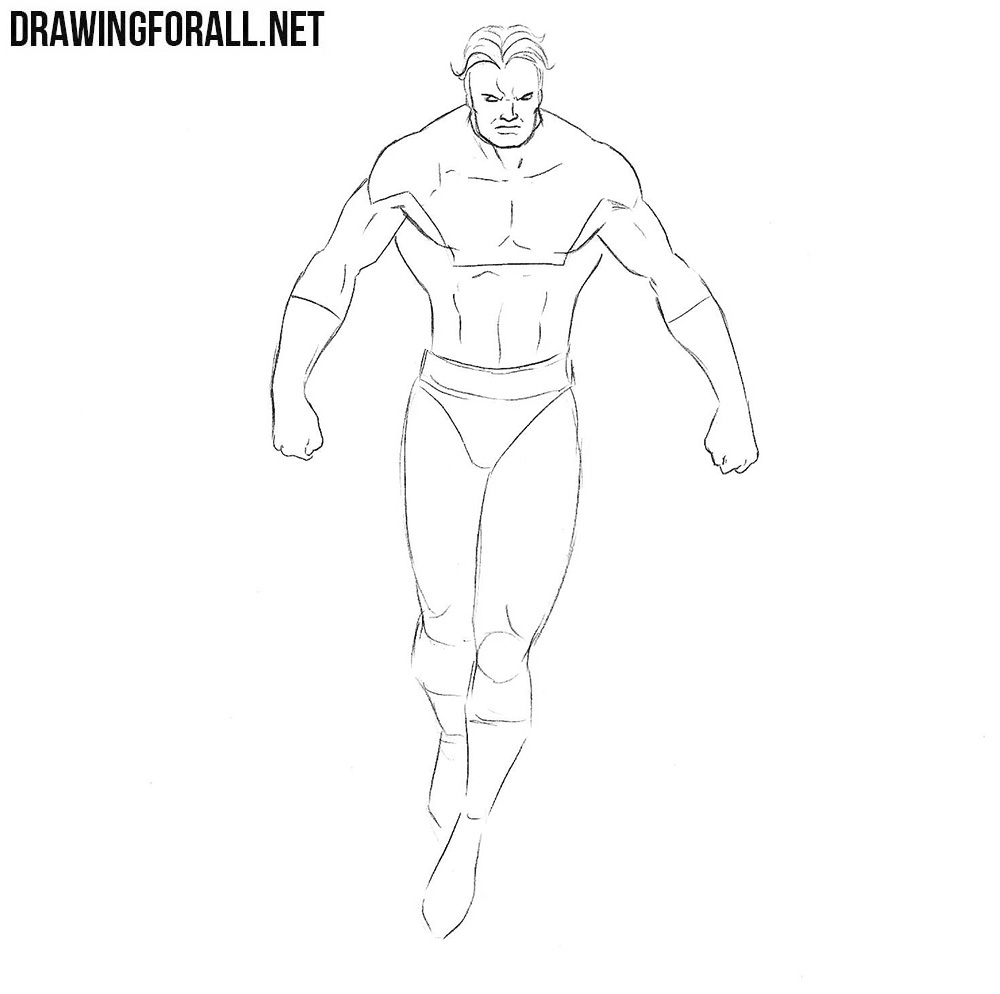 Now let’s move to the legs of our character. With the help of clear and smooth lines draw the outlines of legs and leg muscles as shown in our example. In the same step, we draw the knees and feet. Draw the lines of shoes and remove all unnecessary guidelines from the legs. 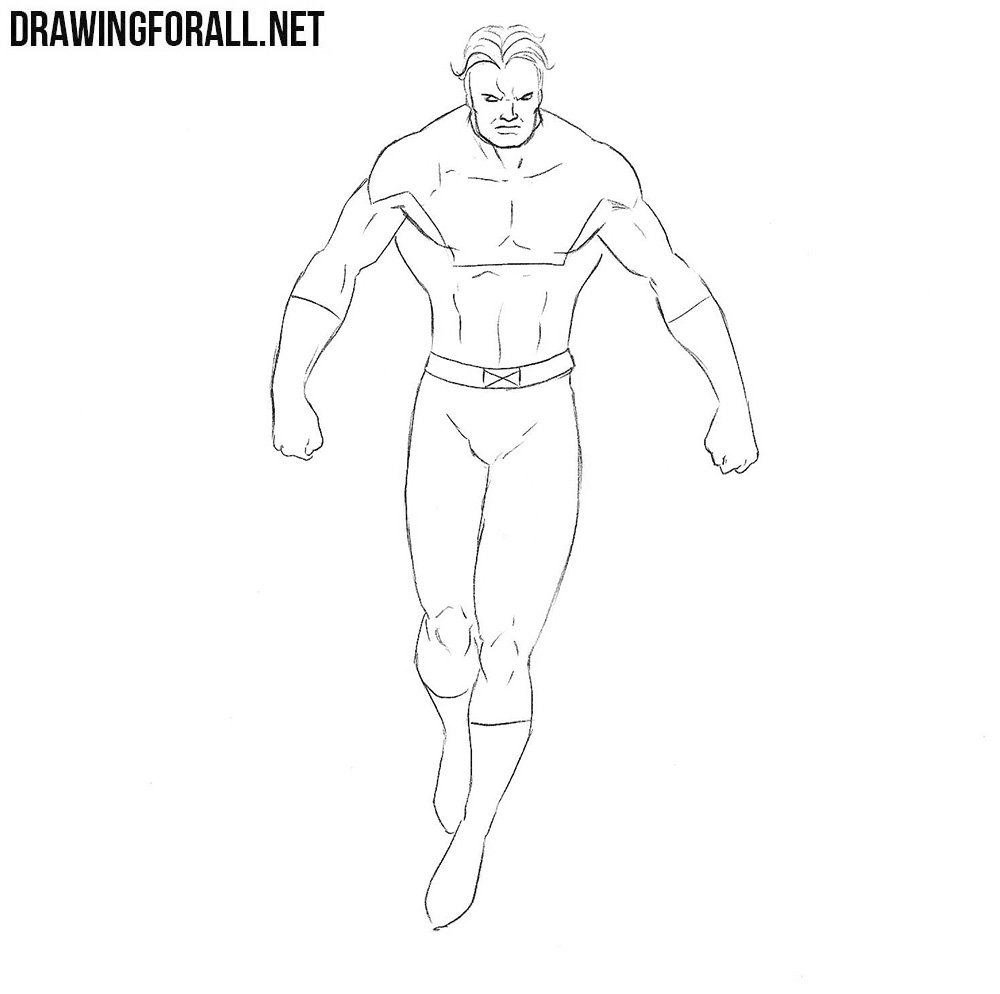 Vulcan is a mutant with the ability to mentally manage huge amounts of energy. And with the help of curved lines draw out the outlines of this energy around the body of the character. Next, using hatching, draw shadows, as shown in our example.

It was a classic drawing lesson, in which we showed you how to draw a supervillain from the Marvel Universe. To learn how to draw other characters from Marvel and other comics universes, visit our category called “Comics” on our website.