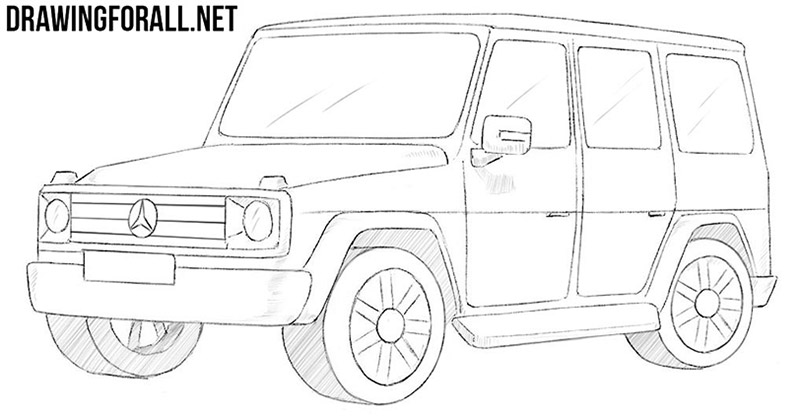 In this fairly easy, but realistic drawing lesson, consisting of eight very simple steps the team of Drawingforall.net will show you how to draw an SUV. Cars appeared more than a hundred years ago, and for the entire existence of vehicles with an internal combustion engine, the world has seen very different types of bodies. But we will not be mistaken if we say that the most popular body type is SUV (sport utility vehicle), a specific North American type of car, officially classified as a light truck, but at the same time designed for everyday use as a passenger transport.

In order not to be mistaken when drawing an SUV, the first thing you need to sketch the outlines of the body. For this type of body, rather rough and large outlines and a high window frame are characteristic. So, with the help of very light hand movements, map out the body, as shown in the example drawn by the artists of Drawingforall.net. 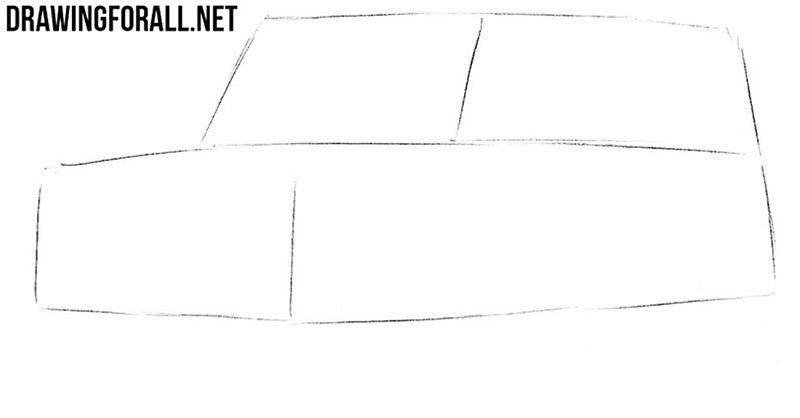 Let’s turn the box drawn in the previous step into something more like an SUV drawing. Begin from the front by depicting round headlamps with square frames and a rectangular grille between the headlights. Now with the help of straight lines outline square windows and angular doors. Next, map out a large and rough rear-view mirror. 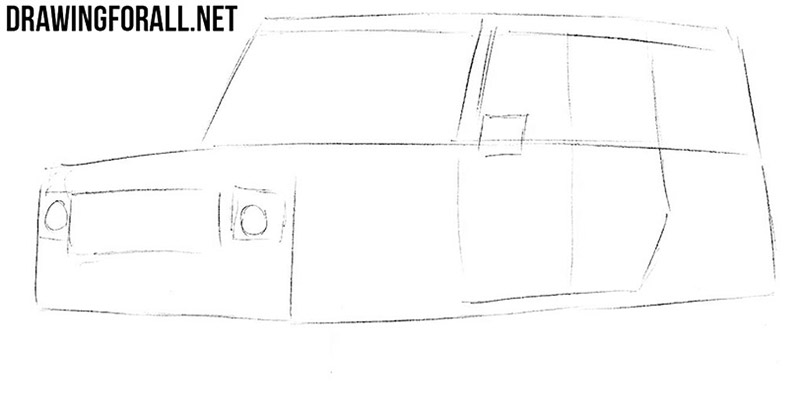 Let’s continue to sketch important details on our SUV drawing. Here we mark the wheels and angular wheel arches. Next, we depict the bumper and side skirts. Recall that we show how to draw an SUV on the example of a Mercedes-Benz G-Class (aka Geländewagen). To draw another SUV, simply change the necessary details in your drawing. 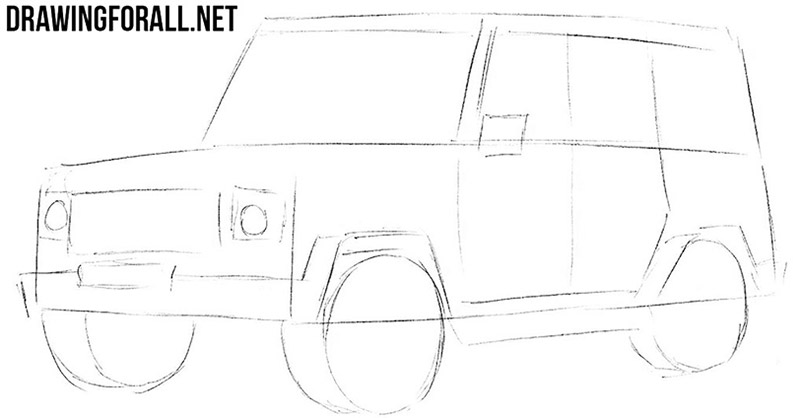 In the initial steps, we have outlined a rough sketch of an SUV, and starting from this stage we will be drawing the SUV in detail. In addition, in the fourth stage, we will need to draw the front bumper, a large logo (in our example, it is a Mercedes-Benz) in the center of the grille and a registration plate. 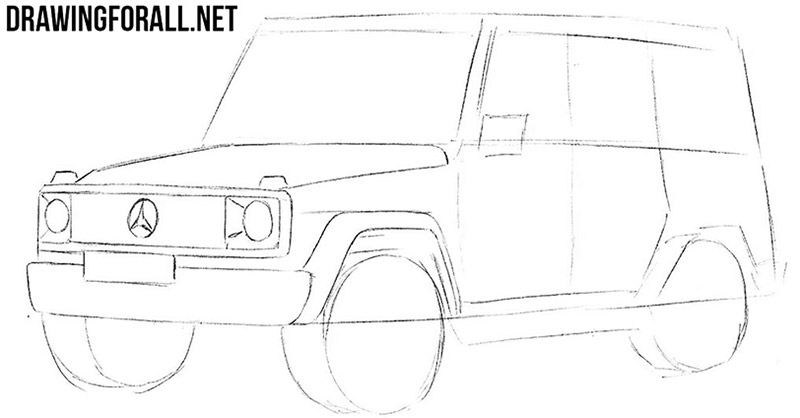 Now let’s work with the top of our SUV drawing. Using clear and dark lines we trace the angular roof and not less angular windows. In the same step, we will need to draw a mirror and remove all unnecessary guidelines from the top of our SUV. 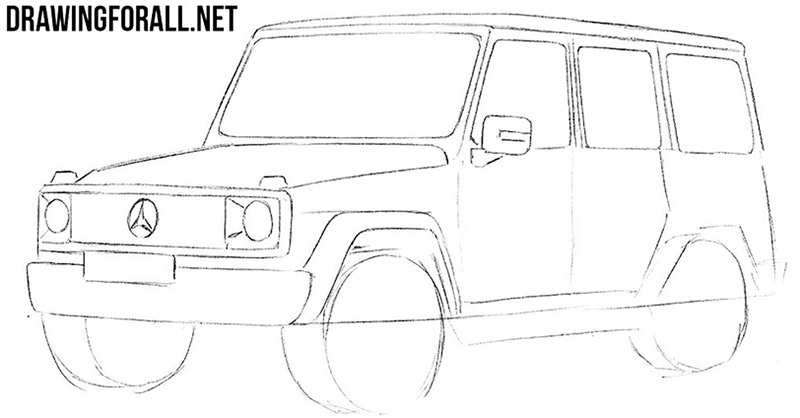 Now we will do the same actions, but with the side surface of the SUV. Using very clear and dark lines draw out the doors. Next, add the handles and depict the step. In the same step, you need to trace the back part and the rear angular wheel arch. 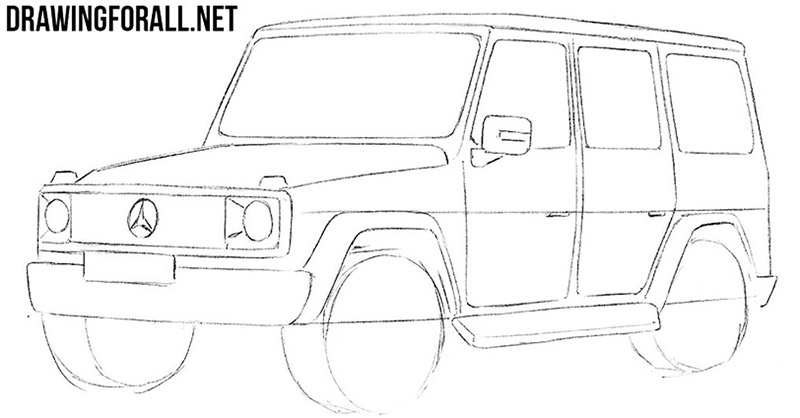 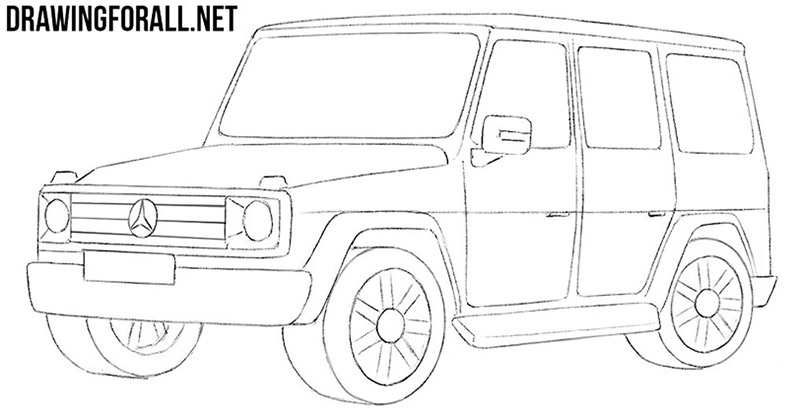 Let’s now make the final touches, but to be precise, we will draw shadows. First, we draw the shadows on the wheels and the inner surfaces of the arches. Next, add glare to the windows and draw the remaining shadows in those places where it is shown in the example by the artists of Drawingforall.net.

So this was a lesson on how to draw an SUV. As mentioned above, you can draw absolutely any SUV, just by changing some of the details. And if you want to learn how to draw any other car, be sure to visit the category called “Cars” on Drawingforall.net.