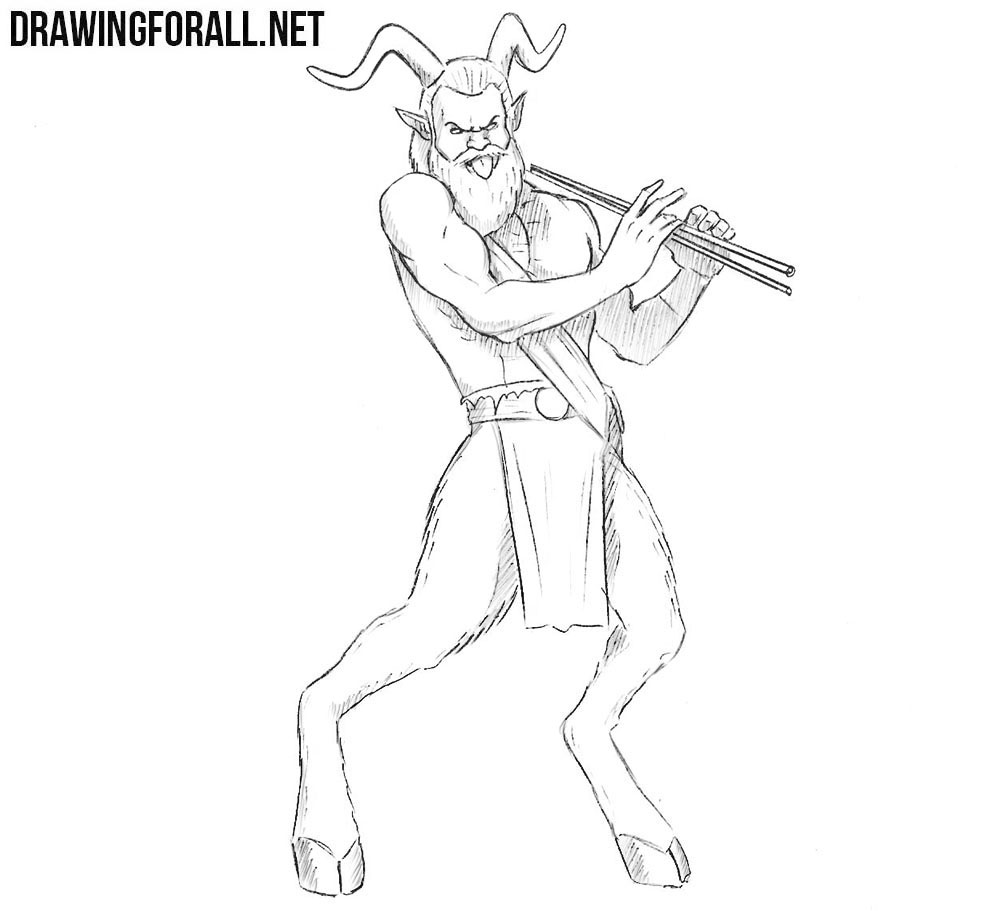 In the myths of ancient Greece there are many very famous characters, and a satyr is one of those. Satyrs in Greek mythology are forest deities, demons of fertility, cheerful goat-legged creatures inhabiting the Greek islands. The satyr is lazy and dissolute, he spends his time in drinking and hunting for nymphs. And today’s lesson about how to draw a satyr is devoted to this very creature.

Let’s start with an almost normal skeleton. First of all, sketch out the outlines of the oval head with two intersecting lines. Next, outline the spine, on which draw the chest and pelvis. Use simple lines to sketch out the arms and legs with a slightly curved lower parts. 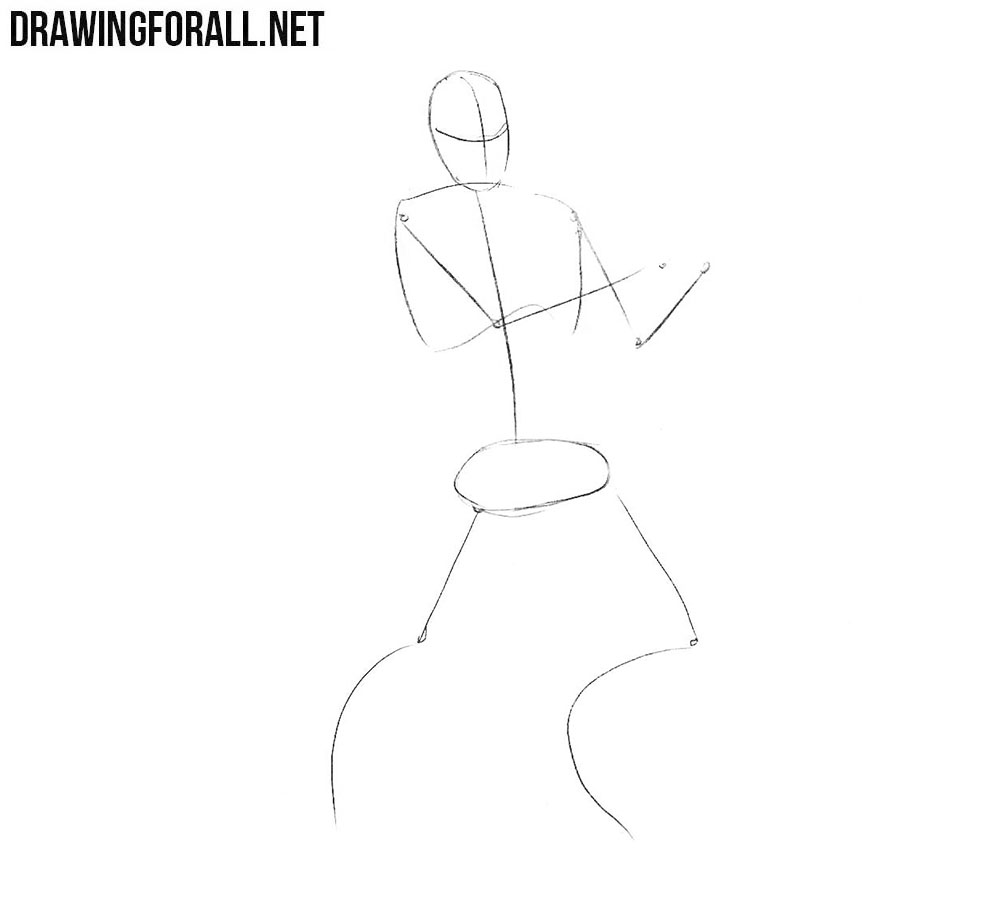 Now let’s add some details to the figure of our being. On the head draw curved horns. Next outline the shape of the torso, arms and legs using simple geometric figures. Sketch out two long flutes

in the hands. Note that the legs should look like the legs of a goat. 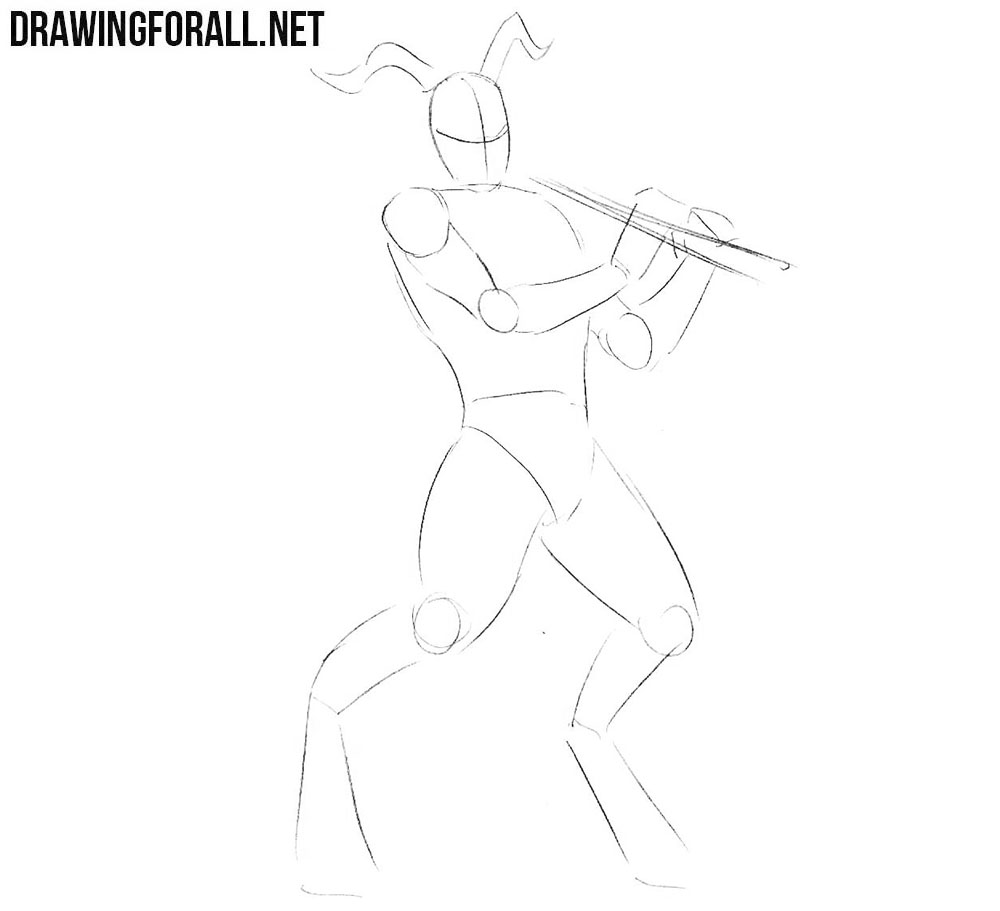 Starting with this step, we will draw the details in our drawing. Using clear and dark lines, we need to draw out the eyes with frowning brows. Below them draw a nose, mustache and mouth. 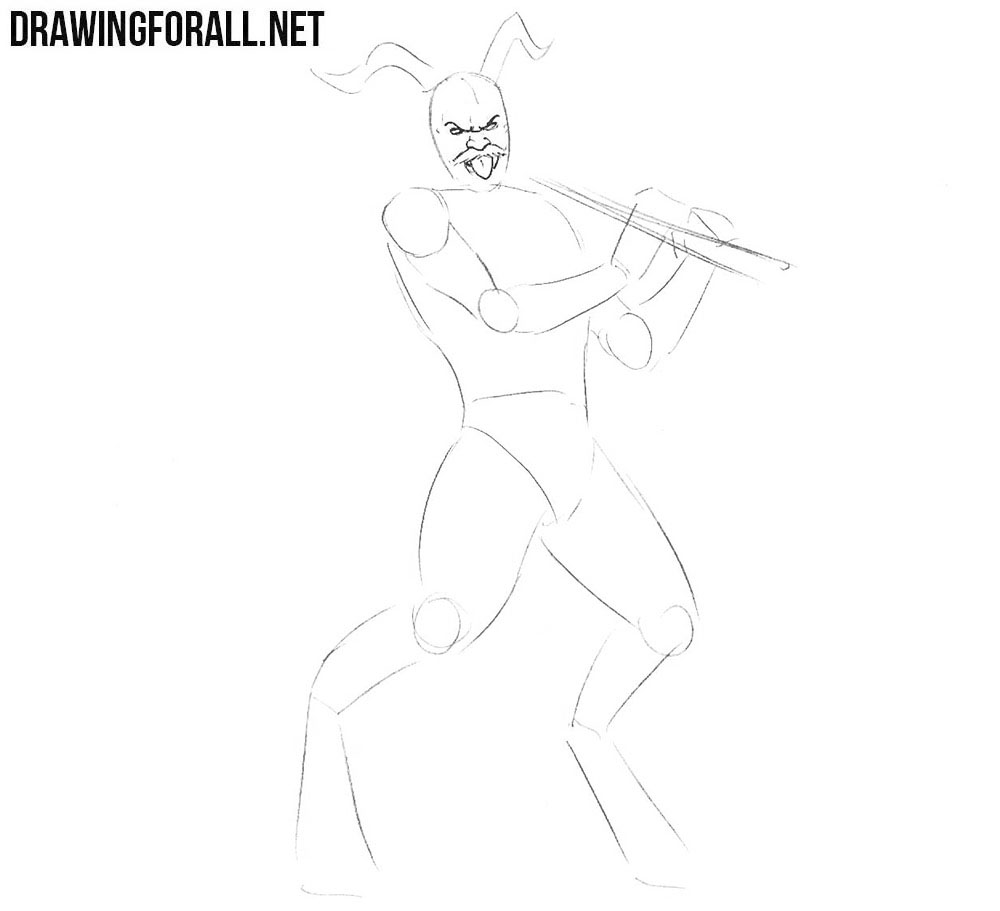 In this step we will finish drawing the details of the satyr’s head. Carefully draw out the contours of the curved horns, hair and beard. Also draw out the outlines of the tongue and long ears with pointed tips. 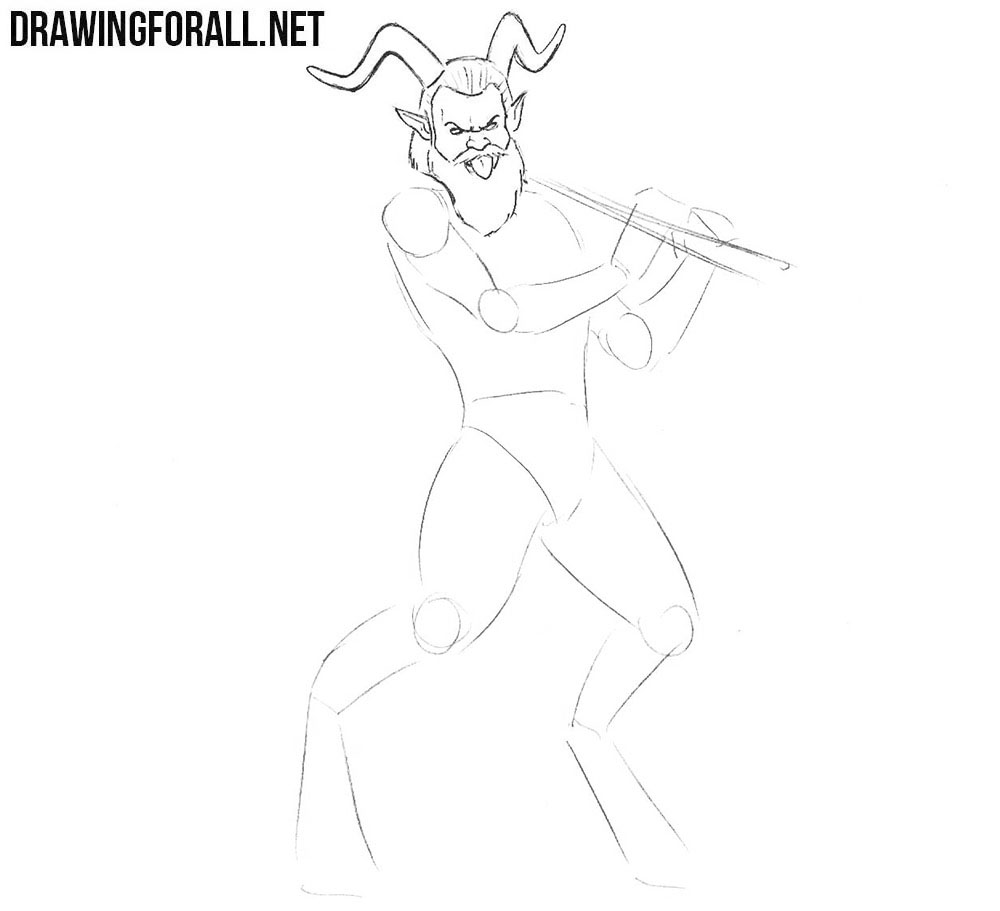 Let’s now move on to drawing the arms of the satyr. Carefully draw out the outlines of the muscles of the arms, as shown in our example. Pay attention that the arms should be sufficiently muscular and wiry. At the end of the step, draw flutes, using long and clear lines and remove all unnecessary guidelines from the arms. 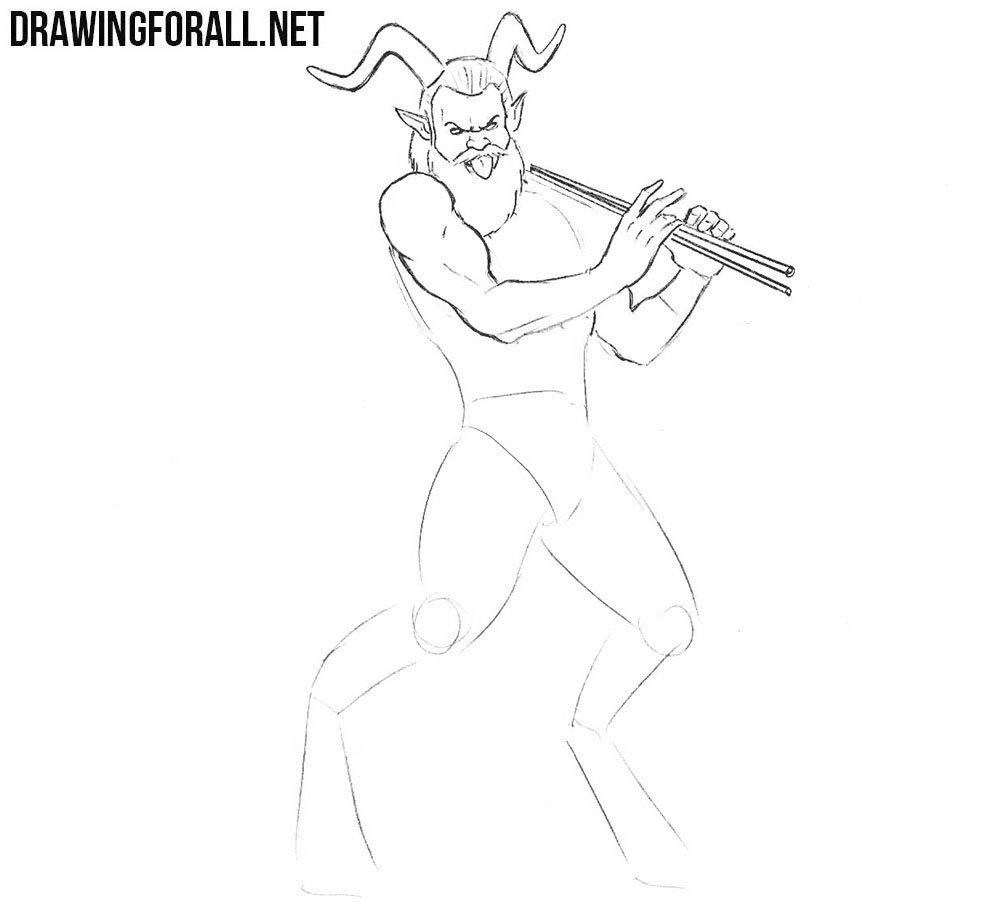 Arms are drawn and we proceed to the torso. Here we need to draw out the outlines of quite pronounced pectoral muscles and oblique abdominal muscles. In addition, here we draw the outlines of simple clothes of the satyr. 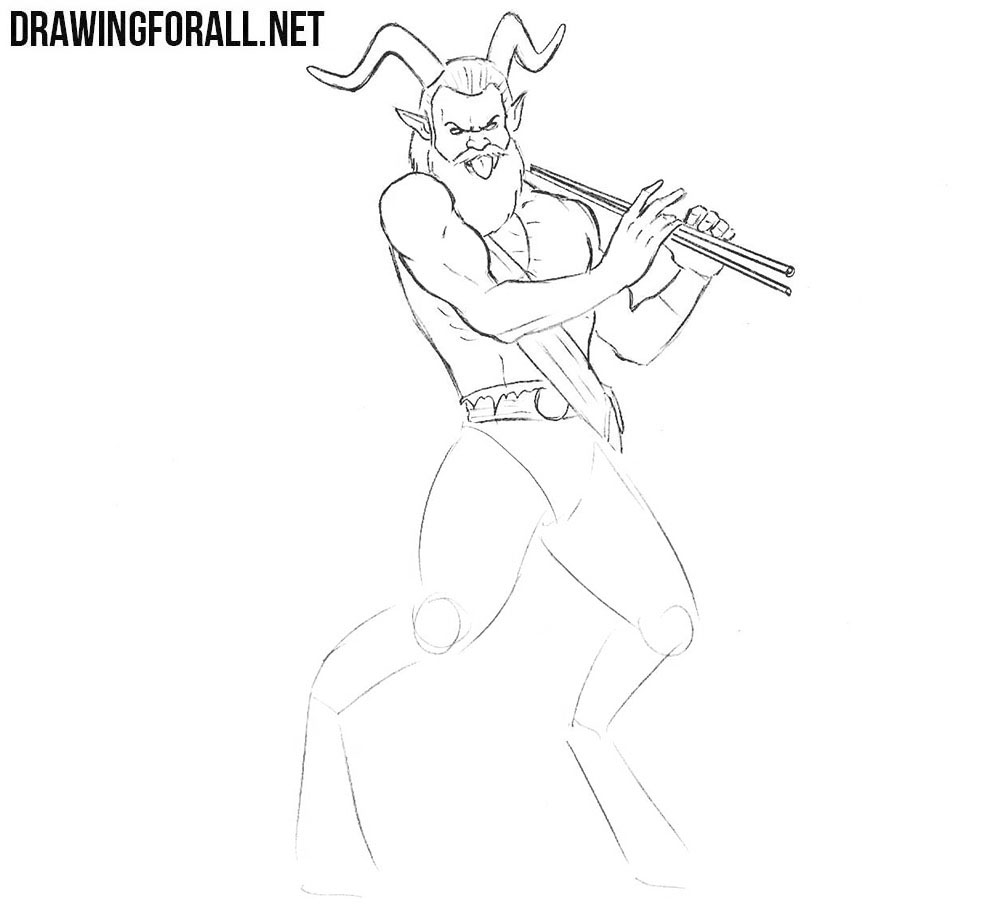 In this step we will draw the lower part of the satyr’s body. Carefully draw out the outlines of the loincloth and the folds on it. With the help of a few strokes draw “shaggy” contours of the legs of the satyr. Draw large hooves and go to step number eight. 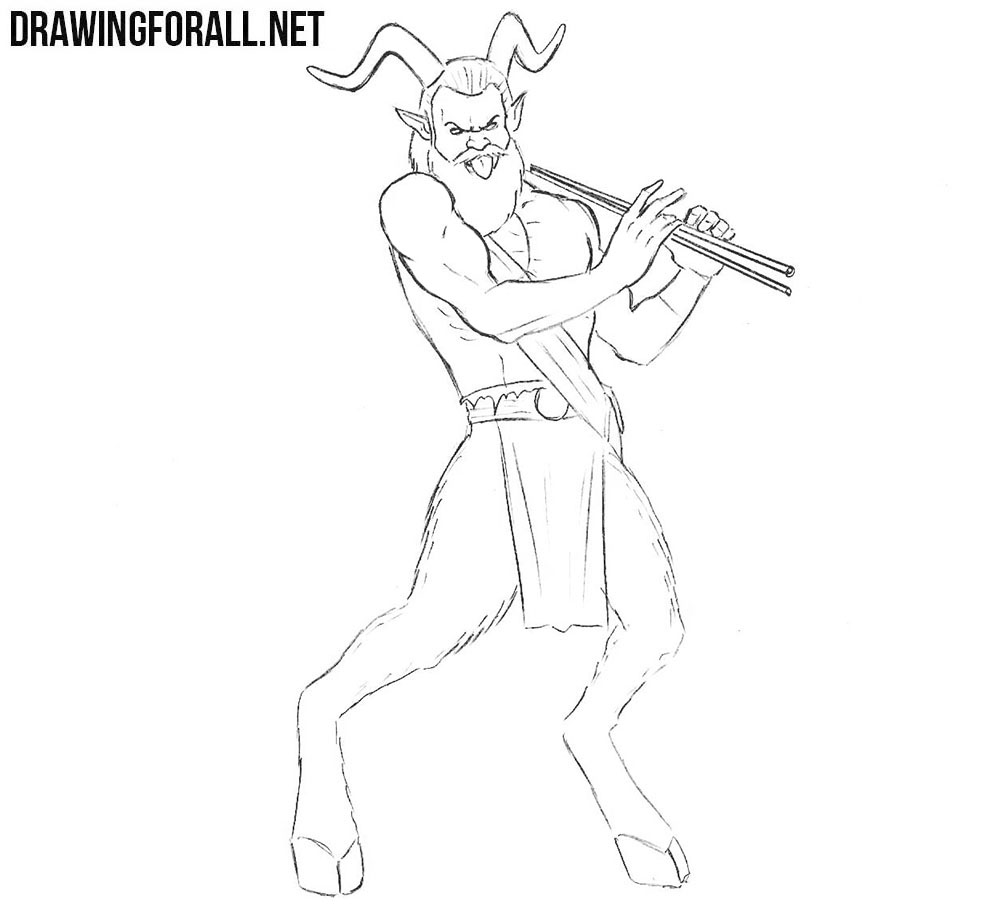 The satyr drawing is almost complete, it remains only to give it a little realism. To do this, we will draw a few shadows with the help of hatching of different density – denser hatching for dark areas of shadows and less dense hatching for light shadows.

The lesson on how to draw a satyr came to an end. But do not forget that we have a lot of interesting characters and creatures from myths on our site. So go to the category “Myths and Legends” to learn how to draw them all.