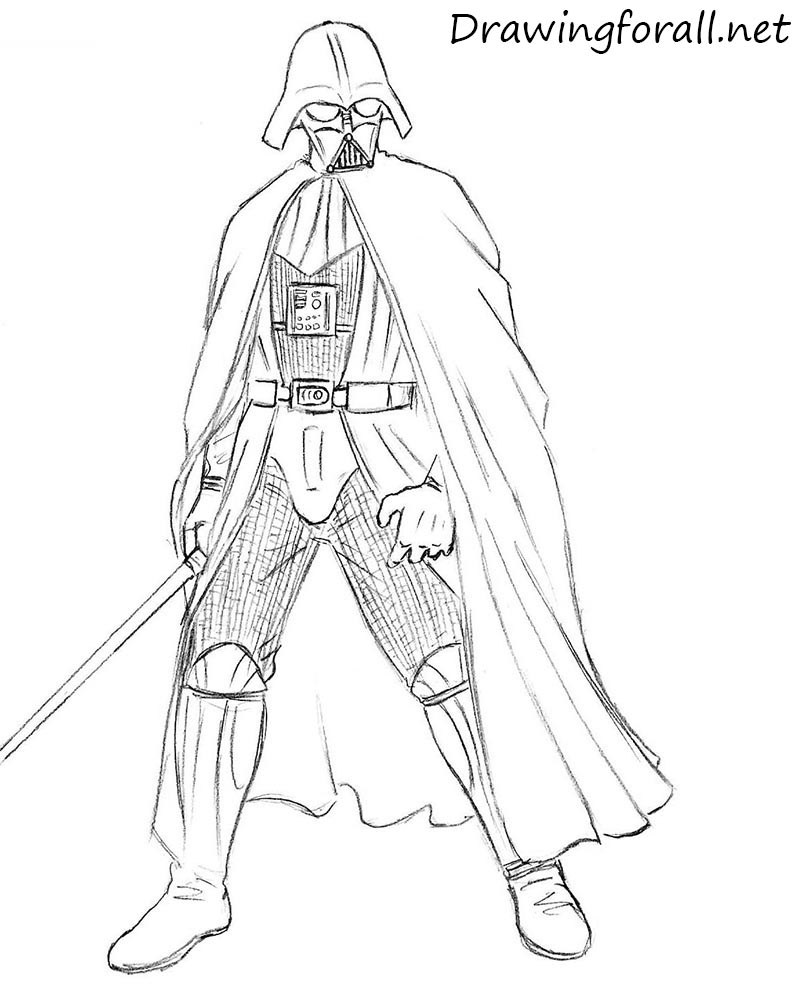 Hello, dear readers of Drawingforall.net! And now the day has come when will show you how to draw one of the the most famous and charismatic villains of all time – Darth Vader. Indeed, it is almost the only character who appeared in all episodes of the Star Wars, in fact, in each he was the central figure around which the story unfolded. In the episode “The Phantom Menace,” he was quite a small child, and in the final episode “Return of the Jedi,” he was the Lord of the Sith.

The lesson is difficult but if you pay attention to our advices, the complexity can only be easily correctable. So, let’s get to this lesson and learn how to draw Darth Vader!

Let’s start with stikman – man made of sticks and circles, which we draw to denote the basic proportions of the character, his posture and the position on the paper. As we all know from previous drawing lessons about characters with a similar pose and figure (on how to draw Batman, for example), male growth is the sum of the lengths of its seven or seven and half heads, 4 of which falls on the legs.

And as in all other lessons, we start from the head, which we denote in the shape of oval. Then, using simple lines draw the spine, shoulders and limbs. Sketch out the joints of knees and elbows using short strokes. 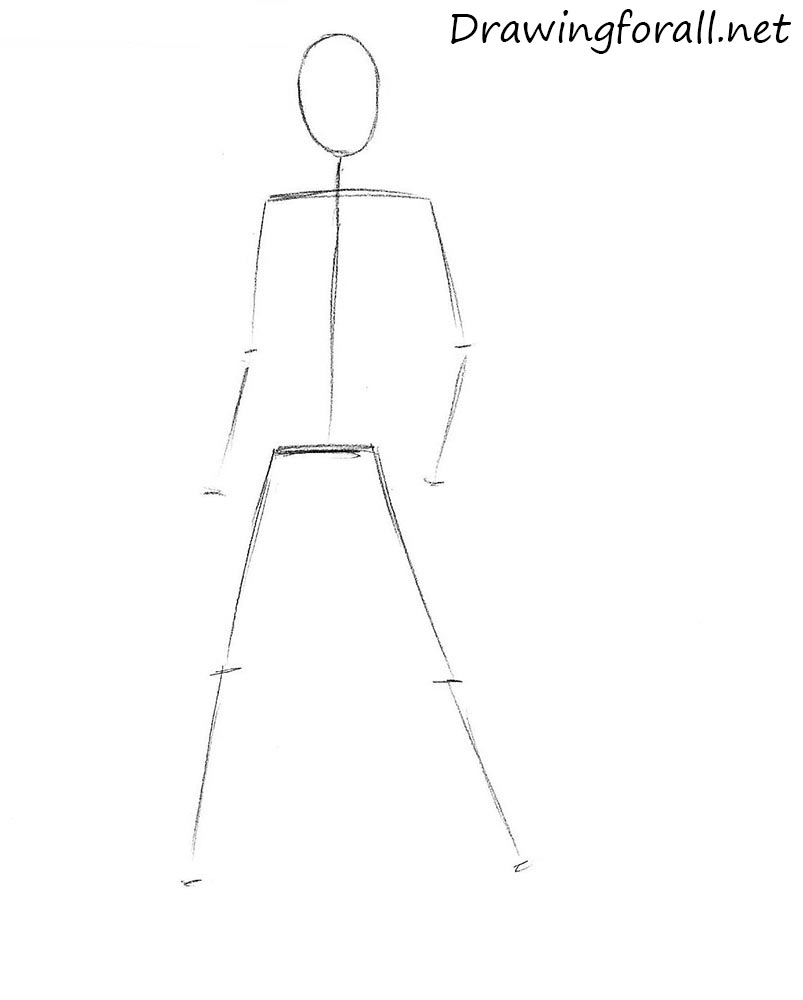 In this step we add volume to the figure of our today’s character. Draw the neck using a short cylinder. Sketch out the torso, using big cylinder. Using lines from the previous step, circle the arms (top to bottom), using two cylinders and square. Using a triangular shape draw the pelvis and move to the legs. Using shapes of elongated cylinders sketch out the legs. Note that most of the legs will not be visible on the end of the lesson.

Legs can be divided into three parts – the thigh, lower leg and foot. Thighs gradually narrows toward the knee, lower legs in the area have a characteristic curve of the calf muscle, after which the legs narrow towards the feet. 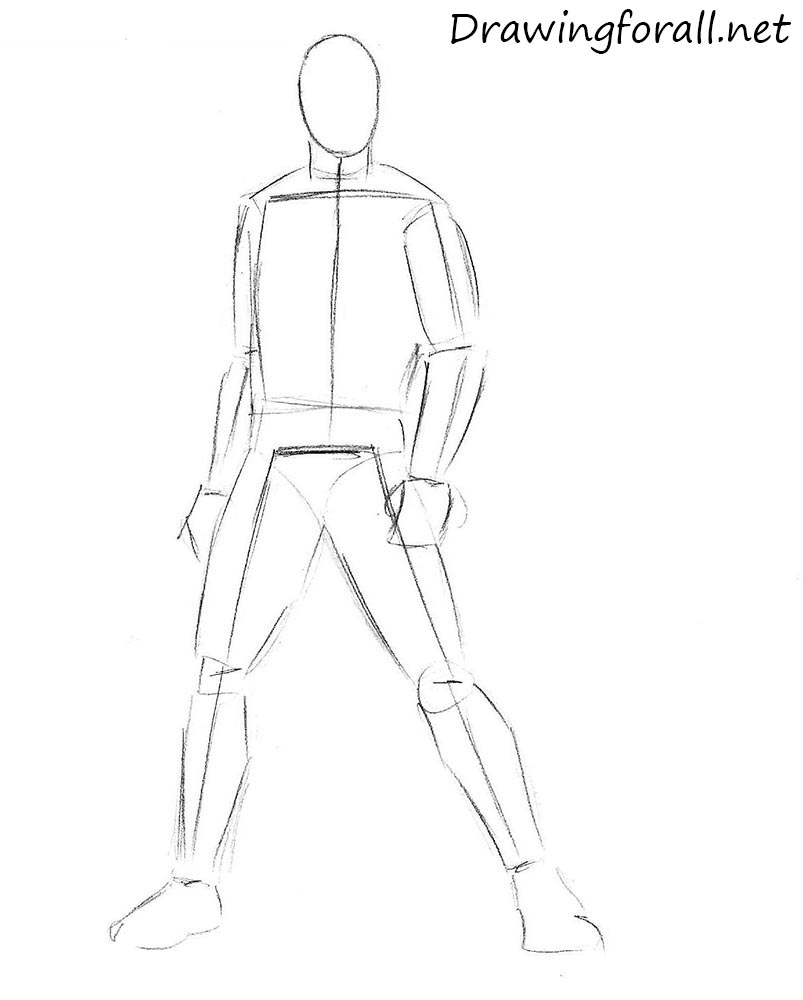 In this step we add some general details to the figure of Darth Vader. As we know, Darth Vader has distinctive features of clothing, such as the helmet and magnificent cape. Let’s draw these elements of the suit straight in this step. But first we mark up two lines of the facial symmetry – vertical and horizontal.
Note, that the lines should be very smooth and light, in order to to make it easier to erase them in the next steps. Also, pay attention, that the lines crossed in the middle of the face. Now helmet. 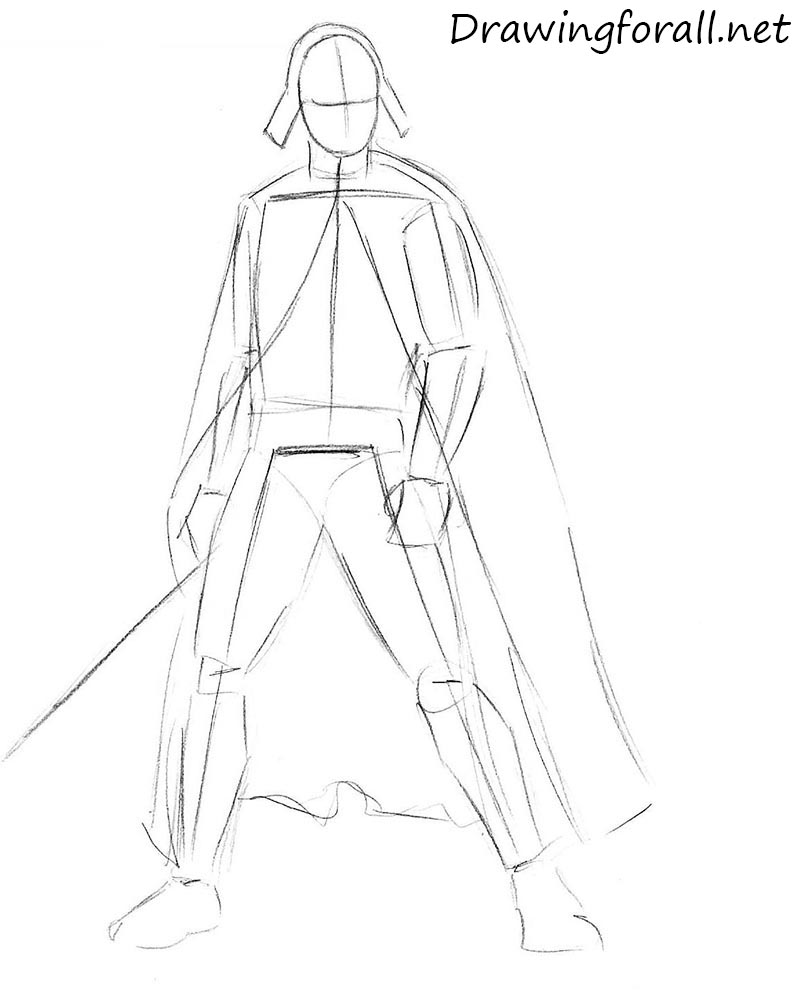 By the way, did you know that Darth Vader costume sketches for the first part of the epic (ie the 4th episode) drawn from the armor of the samurai?

Immediately below the horizontal line of the eyes draw oblong, flattened orbit, underneath draw two arcs, one under each eye socket. Then, in the bottom of the oval of the face we draw an equilateral triangle and connect it using straight lines with eye sockets, as in our ewxample. Also note, that in similar costumes dressed Sith from the popular game «Star wars the old republic» 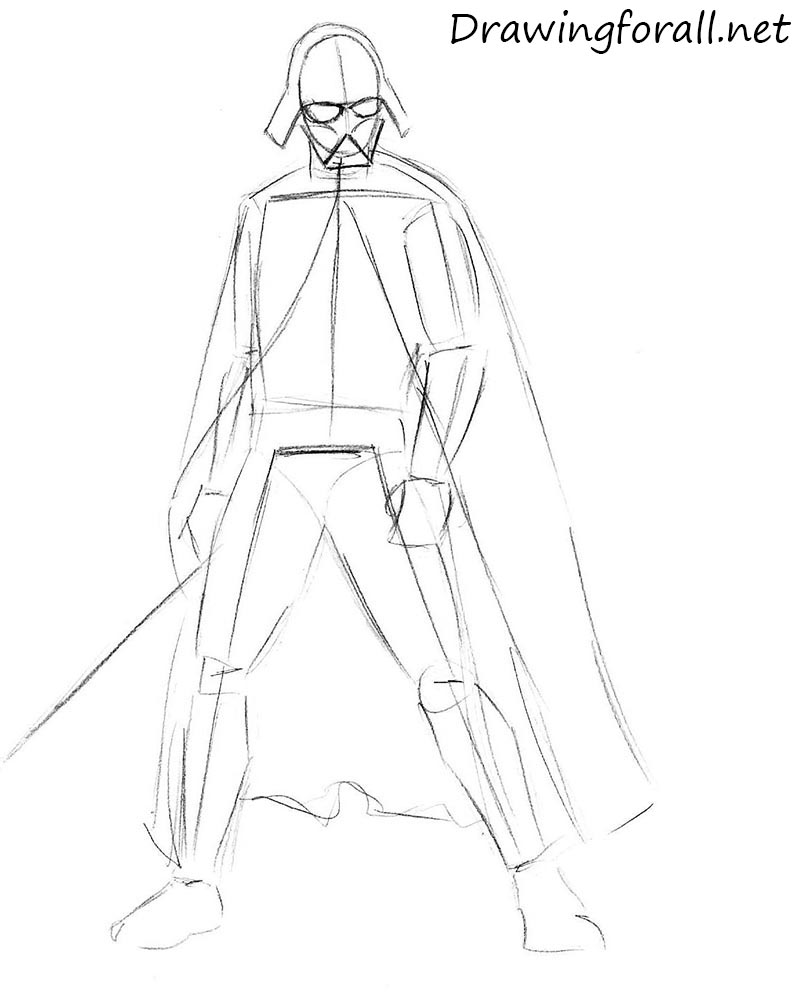 Erase extra guidelines from the mask of Darth Vader, draw heavy brow ridges on the helmet, draw a triangle in the lower part of the mouth. Try to repeat all the details of the mask, as in our example. 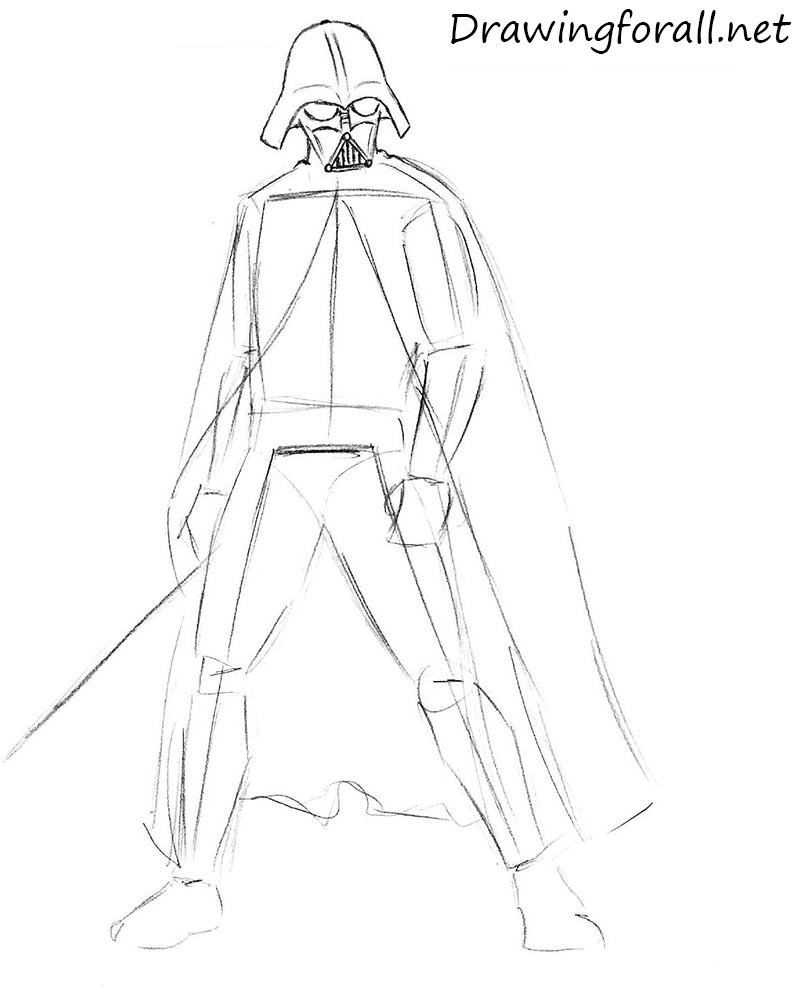 As you can see, we draw our dark lord from the head downward. In this step we draw the cape. In order to make the realistic cape, we need to add some vertical folds and flaps of tissue. Actually folds are formed when the cloak falls from the shoulders, they diverge and become more frequent towards the end. 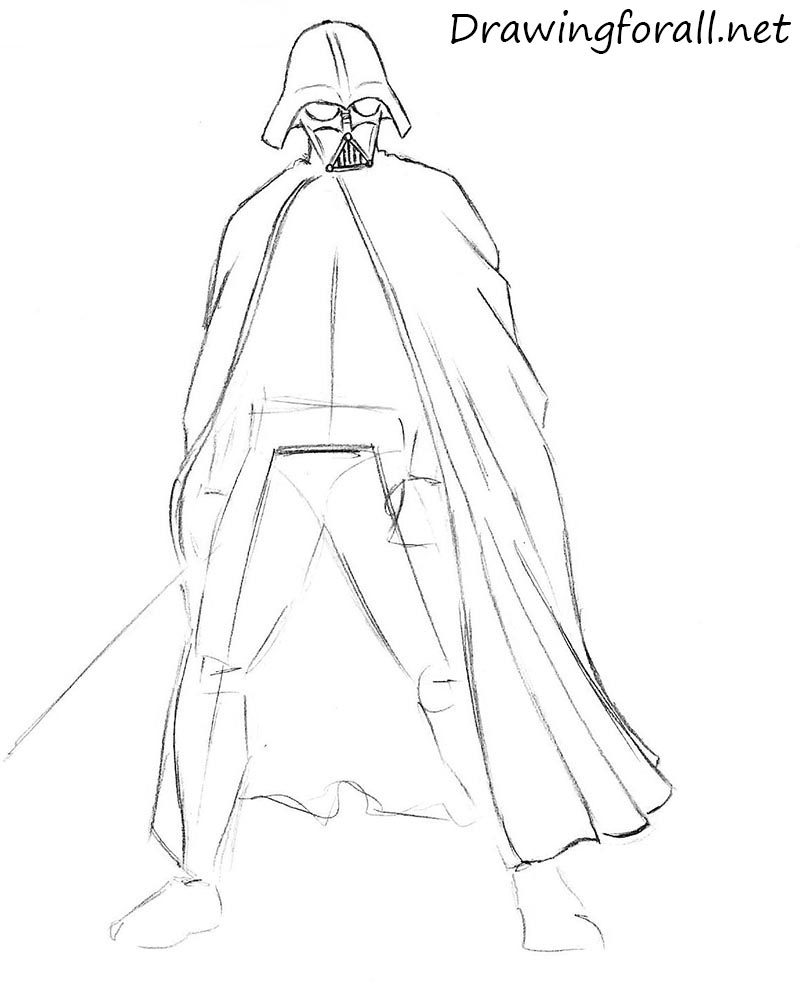 We outline the folds of fabric on the torso, draw the contours of the chest panel. By the way, the suit of Darth Vader is not only armor, it also represents a complex system of medical devices that support breathing and other vital functions in the body of the mutilated Sith Lord. You can draw an analogy with Tony Stark, Iron Man, suit which also includes a breastplate with a complex mechanism, that supports the vital processes. 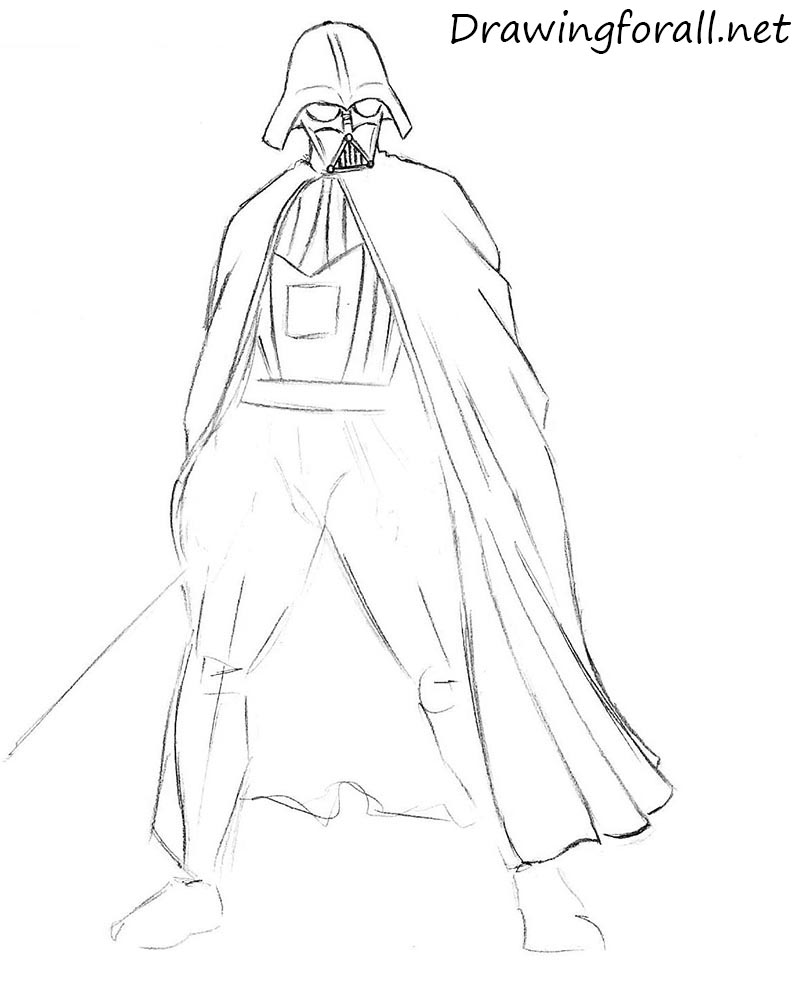 Draw the panel, located on the torso and a large plate, on which the panel is mounted. Under the plate, draw a belt with a massive buckle. Draw also the folds of fabric, which are formed because of the very tightly stretched belt.

Then draw a part of the armor that covers the groin (Which is similar to a protective item of clothing of athletes). In this very step we draw the arms, more precisely the visible parts of the arms. Using the lines from the previous steps, draw the hands, mark on them phalanges and knuckles. 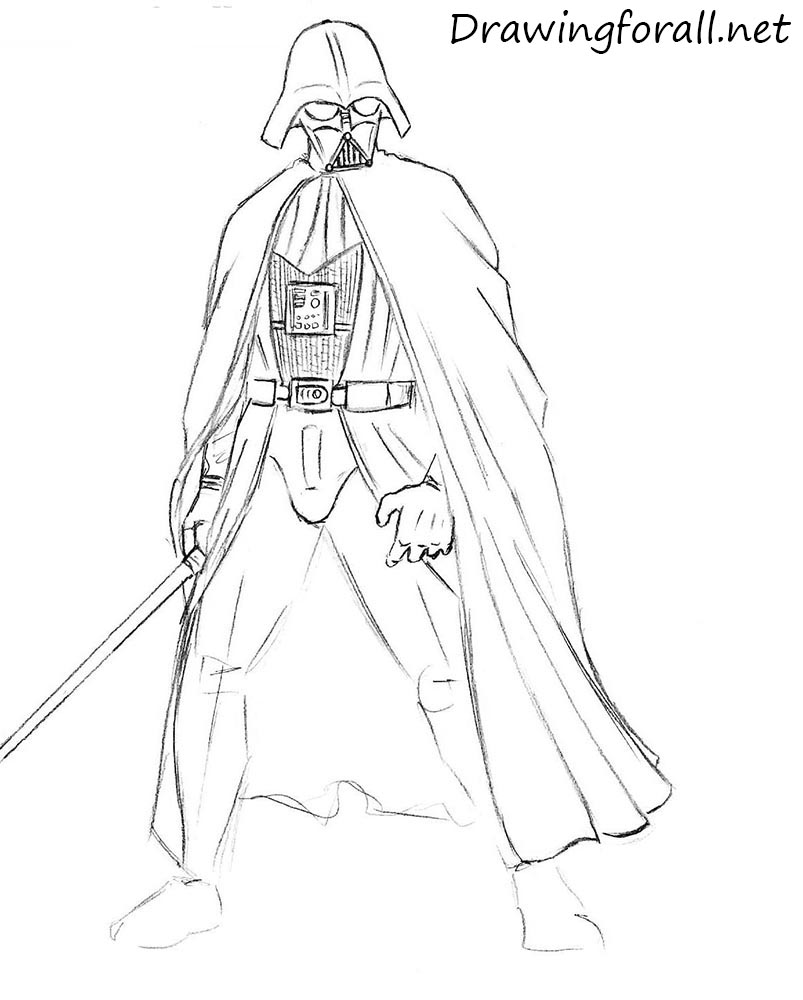 We proceed to the last step in the tutorial on how to draw Darth Vader. In this step we draw the legs. Draw smooth lines on the shoes of Darth Vader. Using very light long vertical and short horizontal lines draw the texture of the pants of our villain. Also don’t forget to add some folds to the pants and shoes. 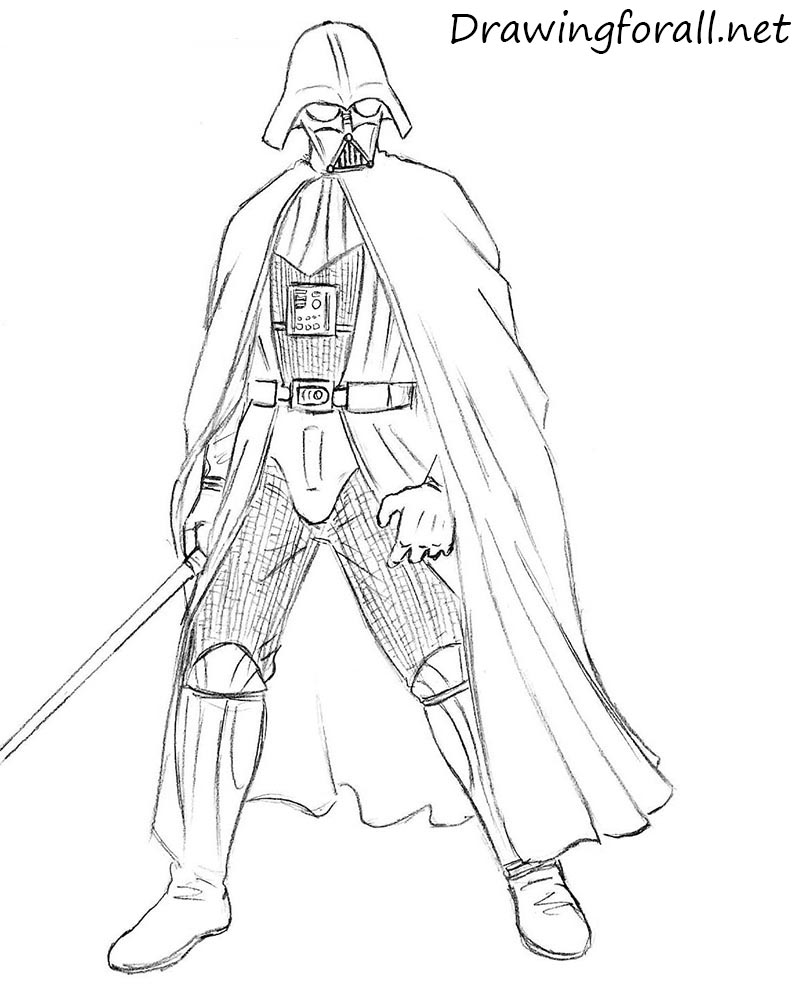 So, the lesson came to an end. In this tutorial, we showed how to draw Darth Vader – the most famous characters from Star Wars. If your drawing turned out not as good as you want, then do not despair, go back to the beginning of the lesson and repeat all the steps again. Also try to draw Darth Vader in different poses. Stay tuned!