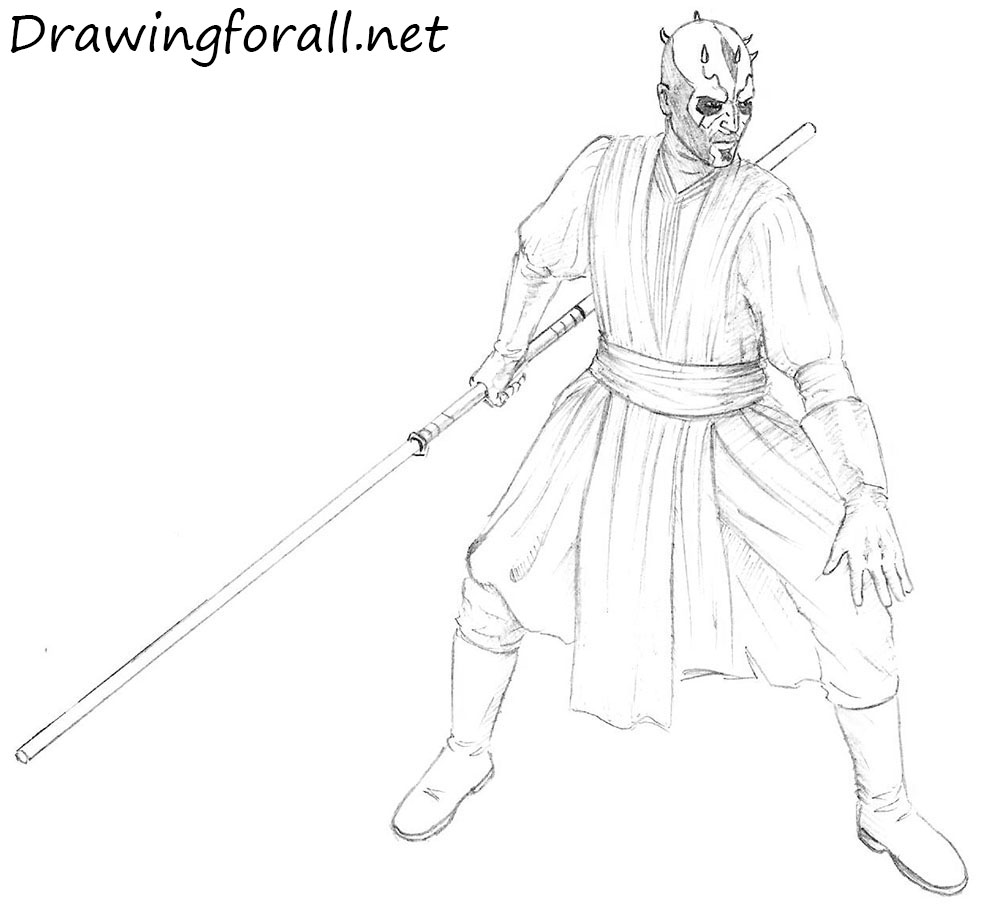 Hello! Today we created a new drawing lesson. As you can see, we will draw Darth Maul. Darth Maul is one of the most memorible characters in Star Wars.

Darth Maul has become a real symbol of the Saga after the release of the first episode, despite the fact that during the film said only a few words. He looks very formidable. With his red lightsaber and frightening tattoos he looks like the embodiment of evil. That’s why we decided to make the lesson of drawing Darth Maul.

At first let’s sketch out the stickman of Darth Maul. The stickman will show us the basic proportions and pose. Our hero stands in half-turn. Usind an oval draw the generales shapes of the head. Using the short line we draw the neck. Below the line of the neck we draw another line for the spine. Using gorizotal oblique lines to draw pelvis and shoulder lines. Using simple lines sketch out legs and hands like in our example. 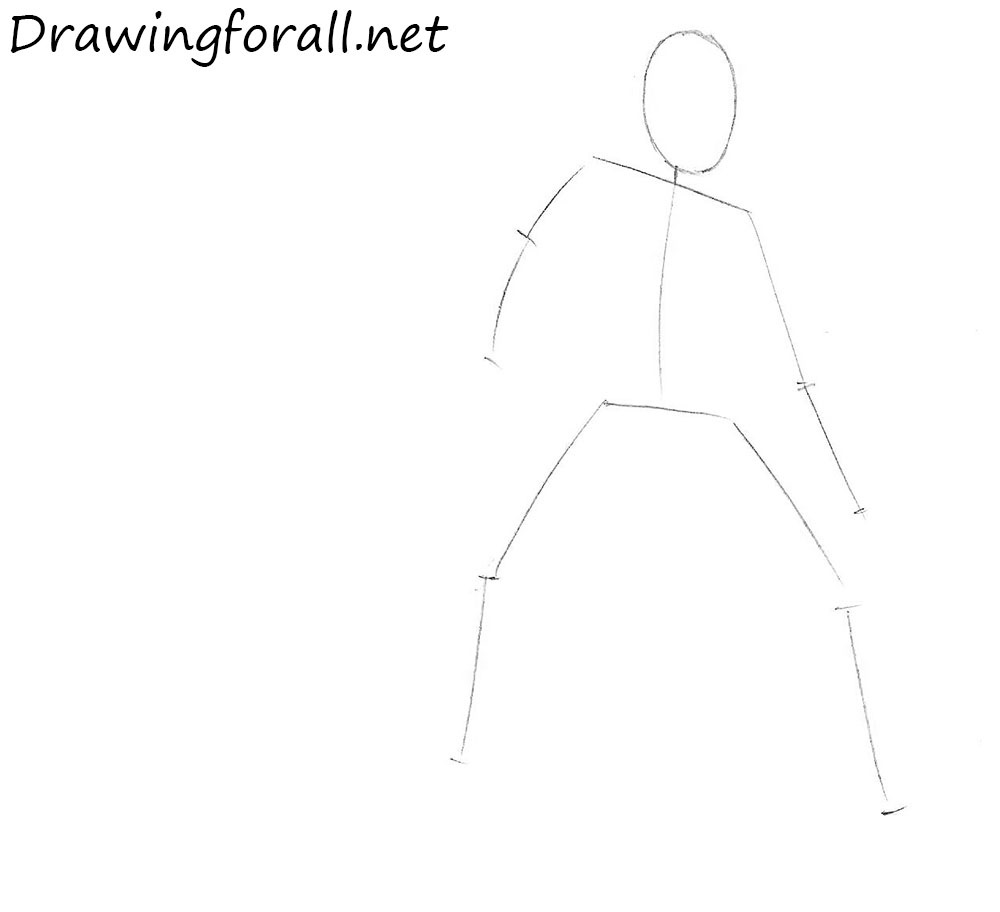 So, let’s try to add some flesh to the figure of Darth Maul. But first we need to mark up the lines of the face:

Then draw the neck,which looks like a short cylinder. Then we sketch out the general shape of the torso. Please note that the torso narrows downward. Pelvis area looks like rounded triangle. Using longated cylinders draw hands and legs. Sketch out the shapes of the hands and feet. Don’t forget about lightsaber.

Using facial lines from the previous step draw the facial features. We have a half-turn perspective, but don’t forget that In full-face position the head is generally five eyes wide. There is one eye’s distance between the two eyes. The upper tip of the ear should be practically in the same plane with the eyebrows.

Look at the face of Darth Maul: 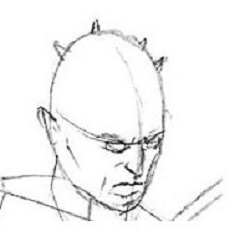 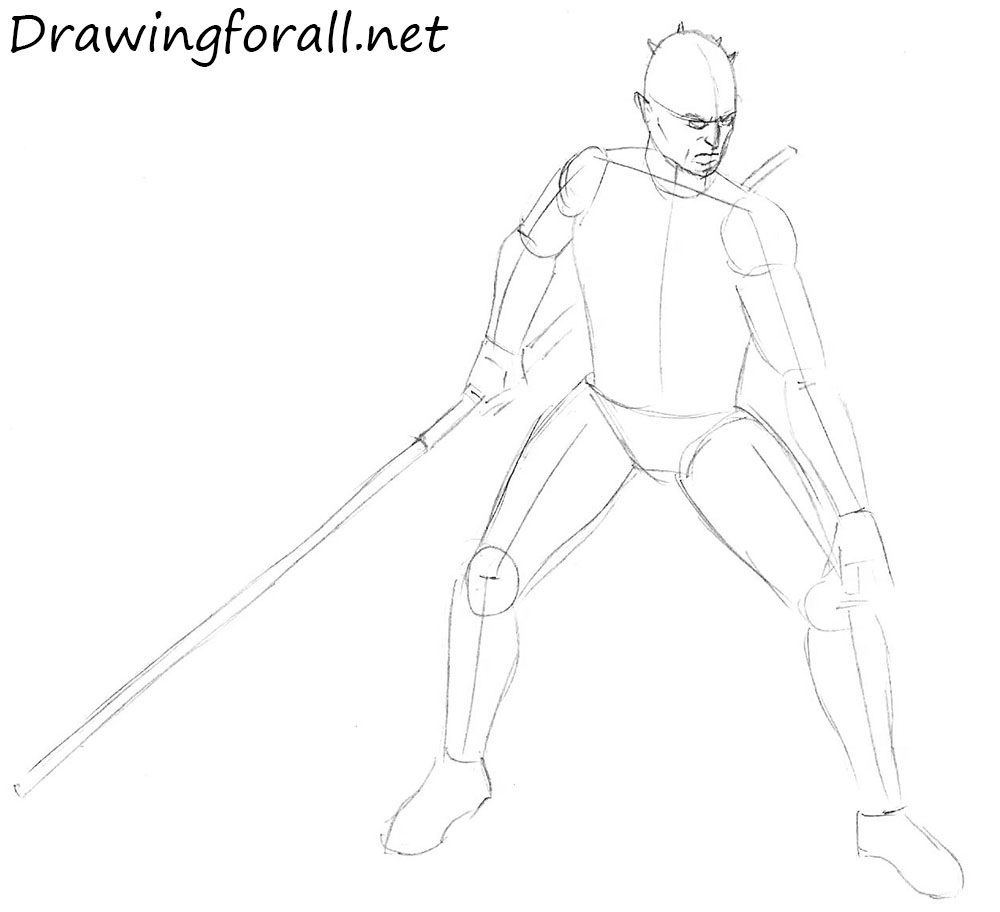 Let us detail eyes, mouth, nose, ears. Also in this step, we erase unnecessary guide lines from the previous steps. 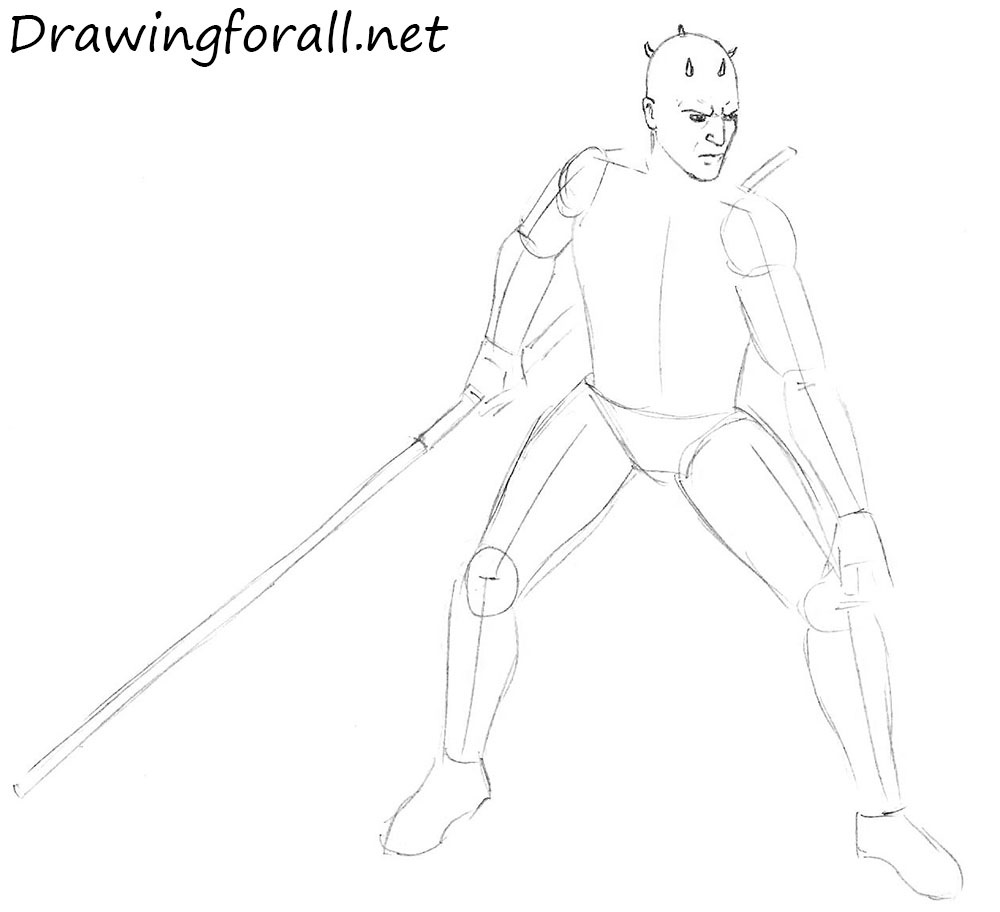 Now draw a tattoo of Darth Maul. Tattoos are an important part of the image of our hero. The application of these tattoo is an important ritual of the people of the planet of Iridonia. First draw tatoo located around the eyes. After thar draw tatoo around the mounth, using short angular lines. 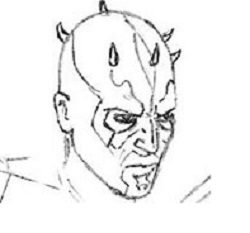 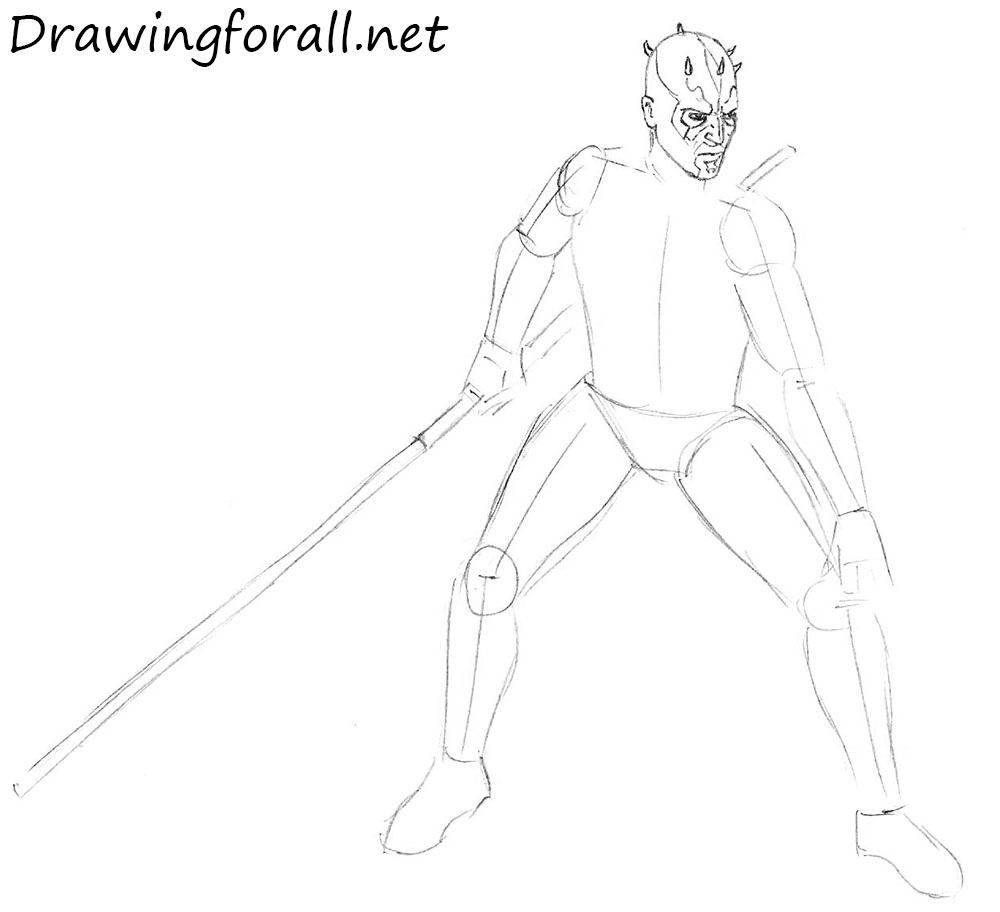 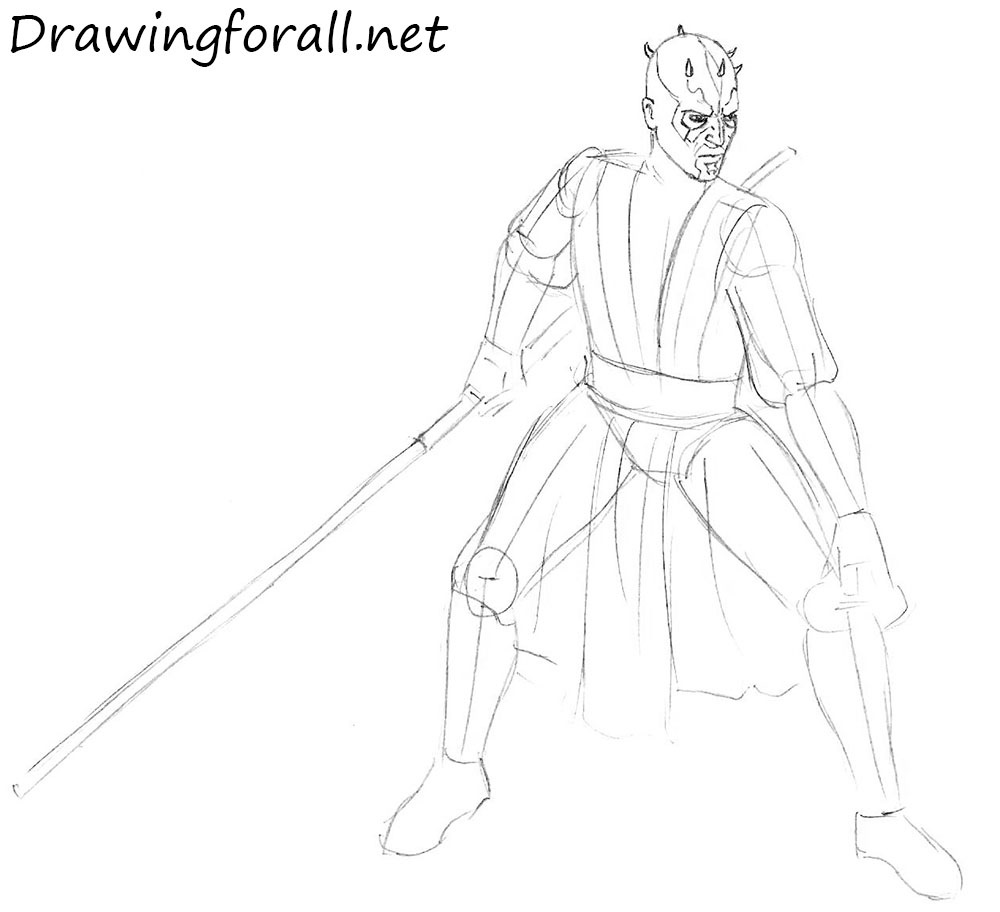 Erase the guide lines from the previos steps and circle the lines of the torso and hands as in the example below. Sketch out the hilt of the lightsaber. Using some short and curve lines add some folds of fabric. 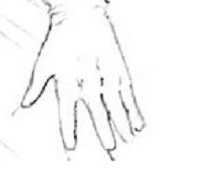 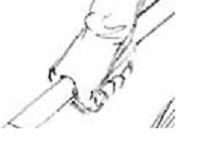 In this step we will work on the lower part of the body of Darth Maul. Erase the remaining unnecessary guide lines. By long and curve lines draw the fabric as in our example. Don’t forget some to add some folds of fabric. Also in this step we draw the shoes and add the final details. 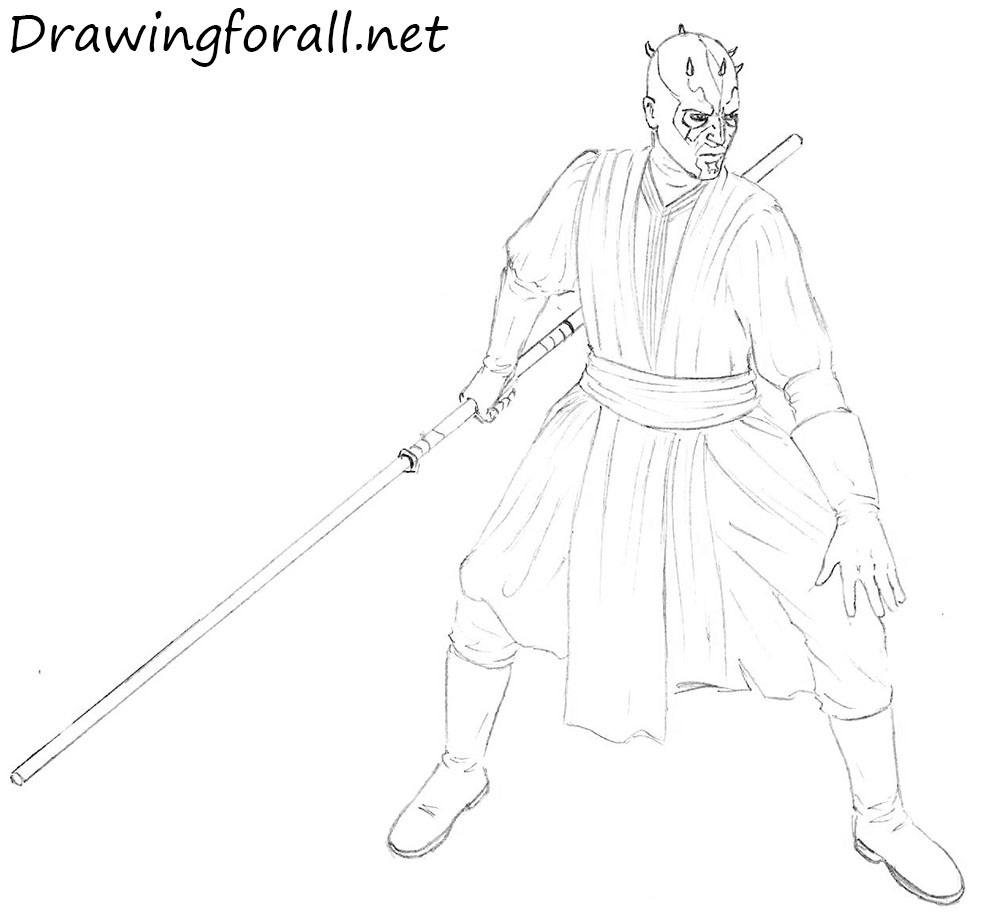 In this step we will add the shadows. But first we need to paint the dark areas on the face. We add shadows on the areas, where the light doesn’t falls. In order to get realistic shadows use light and smooth hatching. To get darker shadows, add another layer of hatching.

It was lesson tutorial in which we told you about how to draw Darth Maul step by step. Hope you drew a formidable and impressive sith. Don’t forget our website and see you soon!